Performance Car of the Year 2021: the road test

Today it feels like there are 11 rather than ten PCOTY finalists. On each run along our road route, the ten box-fresh contenders are joined by something a little more seasoned, a flash of red in the rear view and then a characteristic vibrant, buzzing rasp. The culprit bursts into view in a Mazda RX-8, wearing a grin about as wide as his exhaust tips.

He’s pinned hard on the throttle, and what he announces ever more clearly before he’s gone is that we’ve nailed our location. About 20 minutes ago, passing through the sleepy town of Whitfield, signs along the road suggested differently. They warned us kangaroos, wombats or something with antlers waited, while the speed limit, now lowered to 80km/h, introduced fears of much worse: traffic. 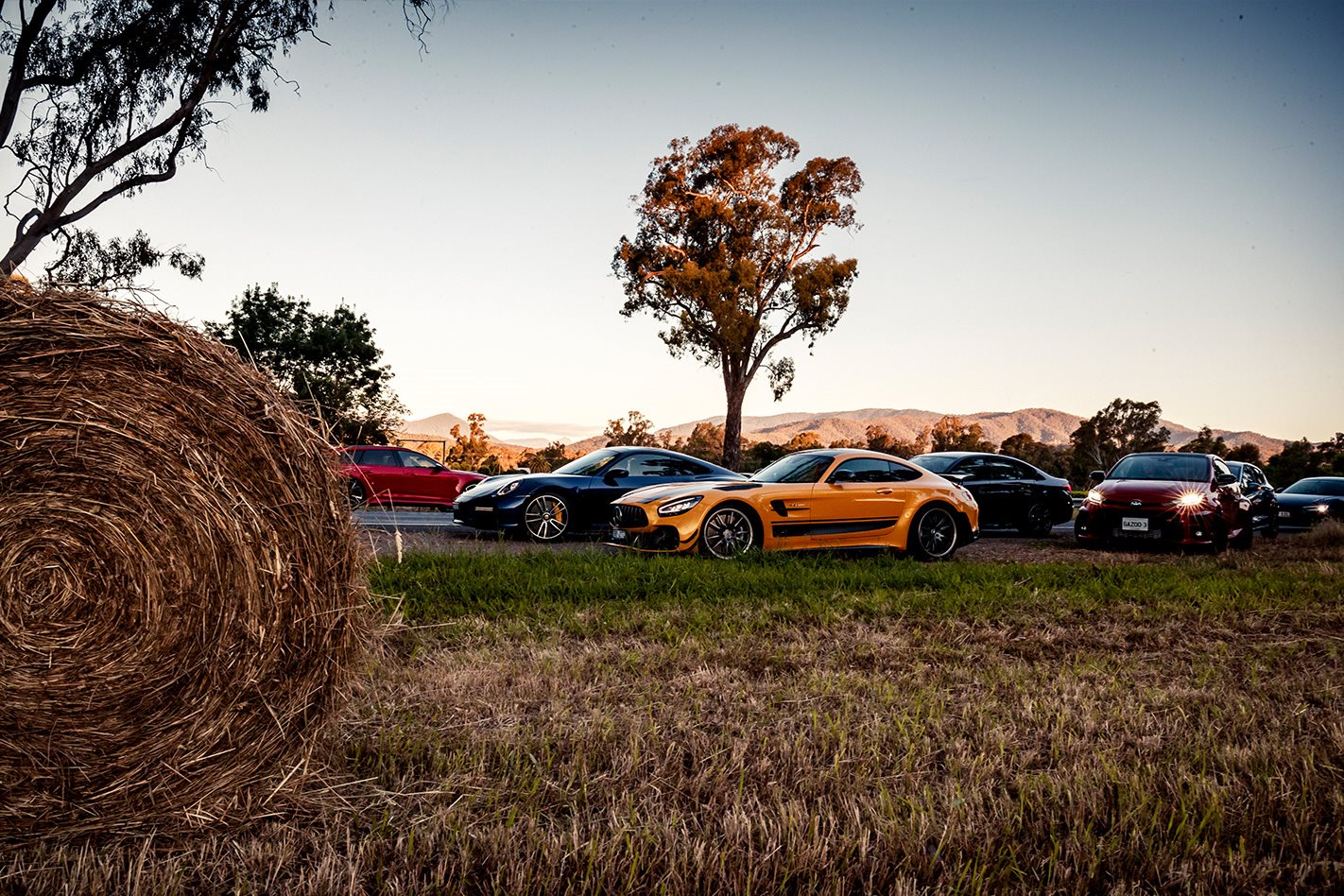 Yet the 10 beguiling drivers’ cars sitting on the side of the road at our turnaround point, waiting to be unleash, have lucked in on this cool, overcast Tuesday morning — the start of Performance Car of the Year 2021. Mansfield-Whitfield Road is dry. And, besides some sticks, or old mate in the Mazda, the tarmac, strewn over the north-western slopes in Victoria’s eastern Alpine region like a discarded shoelace, is empty.

And as a judging tool, the route is perfect. When the time comes for judges to saddle up, however, the closest thing we have to a rally car – in principle – is left abandoned. Hype for the Toyota GR Yaris has made it something to build up to for others, leaving its keys and strangely high, form-hugging seats for me. 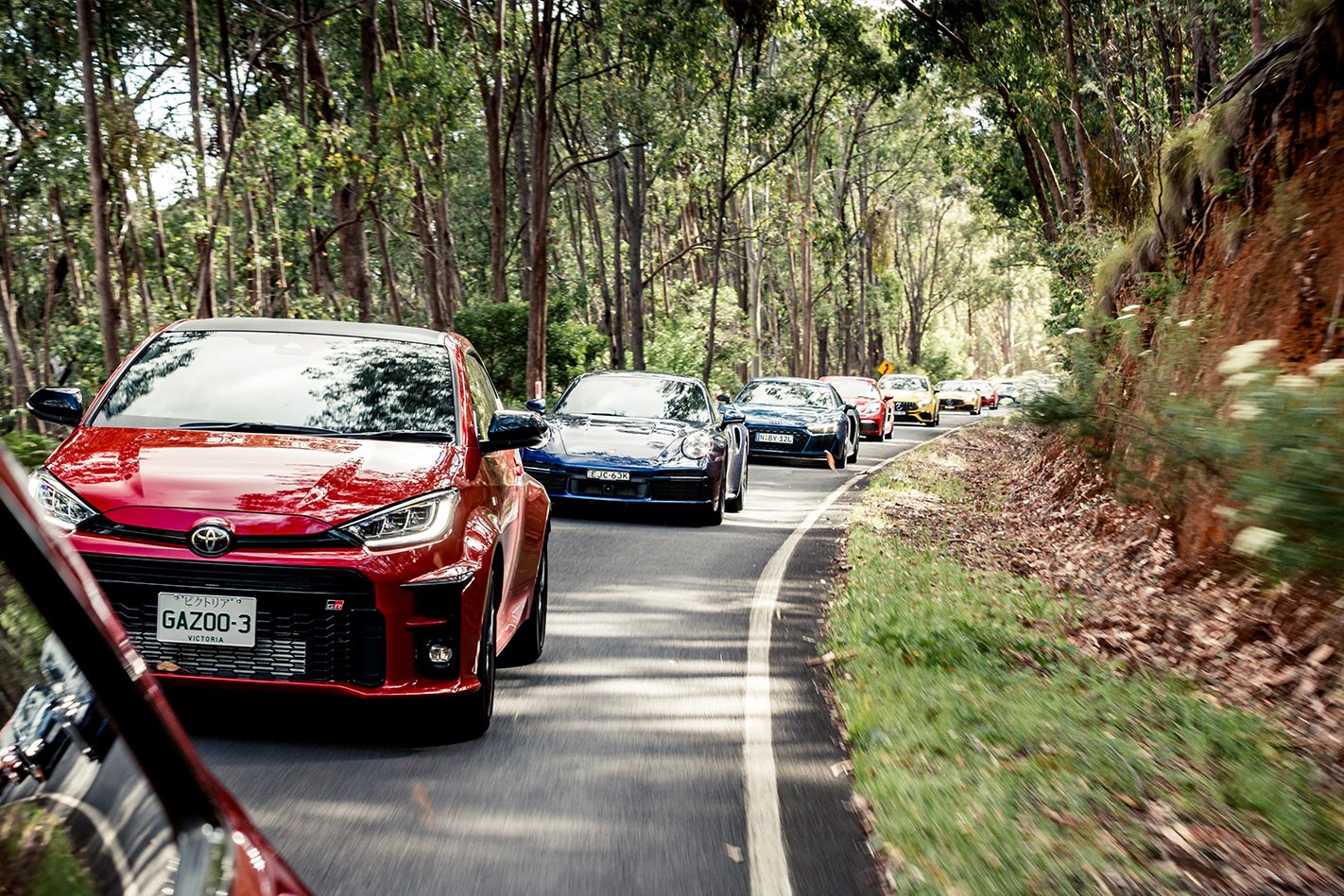 Its three cylinders warble to life without much drama ... until we’re off down the road. It pulls wildly to its redline, lathering on torque as induction roar builds. Somehow, through witchcraft, or otherwise, it feels strongest, and sounds most feral, in the last 1500rpm. Ground-hugging heft and long-stroke damping distribute weight evenly across the Yaris’s short wheelbase. With so much cornering poise it ends up, despite only modest rubber and open differentials, unflappable almost to a fault.

The Yaris’s wide rear-track remains stubbornly planted even with 70 per cent of its grunt reaching the rear tyres in Sport mode. The nose will push before it relents. Maybe, a race track will expose its rally-bred wild side. But right now another small hatch bobs into my rear view. Ford’s new generation Fiesta ST only drives its front wheels and relies on a simpler torsion-beam out back.

Crucially, it scores an LSD, and it’ll happily demonstrate it’s keener to cock a leg than a small-bladdered terrier. This behaviour is nothing new, except the Fiesta’s rear-end antics now feel encouraging rather than threateningly hyperactive. Downhill it’s all over the Yaris, relying on its grippy Michelin Pilot Sport 4s to defy any power deficit. Sweet, syrupy weighted steering and the positive, but slightly notchy, gearshift only enrich the drive, making it easy to alight the ST’s excellent Recaro seats effusive, and almost certain that fun should not cost any more. 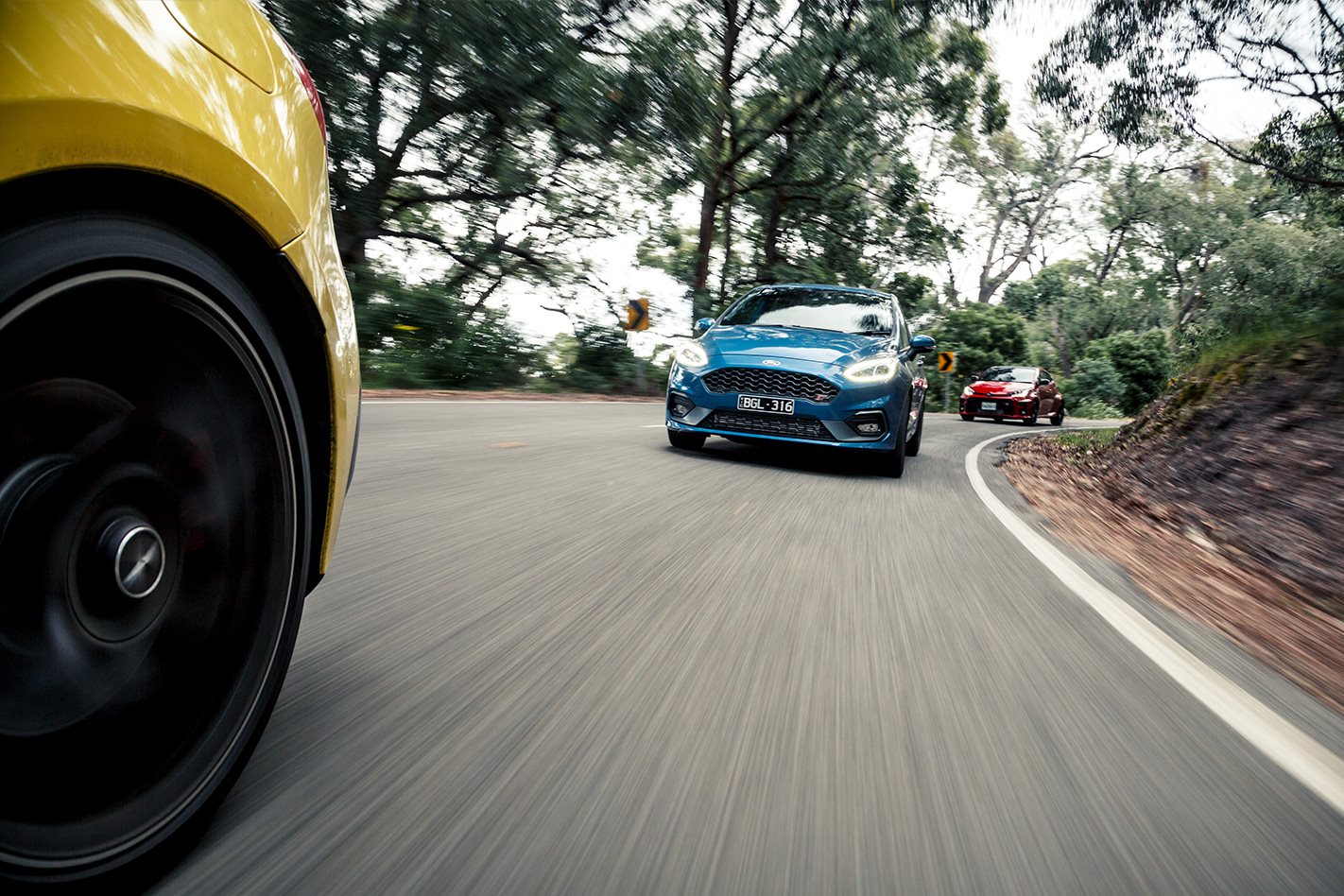 So anyone would approach the Mercedes-AMG A45 S with curiosity, wondering how it might justify a price almost three times as large. While there’s no manual, and instead an eight-speed DCT shifting gears, that’s for the best, because it’s hard to adjust to the way the A45 S gathers speed. It explodes forward, piling on torque as it unfurls through its rev range like it’s a litre larger than it is.

Military-grade engineering is present in the steering, as well, where pin-sharp accuracy offers feedback that filters out impacts and absorbs road information. Here, the A45 S makes rapid progress and underscores its giant-killing ability.

Luckily, there is no shortage of giants today, starting with the Audi RS6 Avant. And in some ways, the wagon is like a larger A45 S, since it also has an all-wheel-drive system and Twinster-style rear LSD underneath. The RS6 needs a few extra goodies, though, like optional carbon brakes, rear-wheel-steering and a variable steering rack to deal with its prodigious mass. 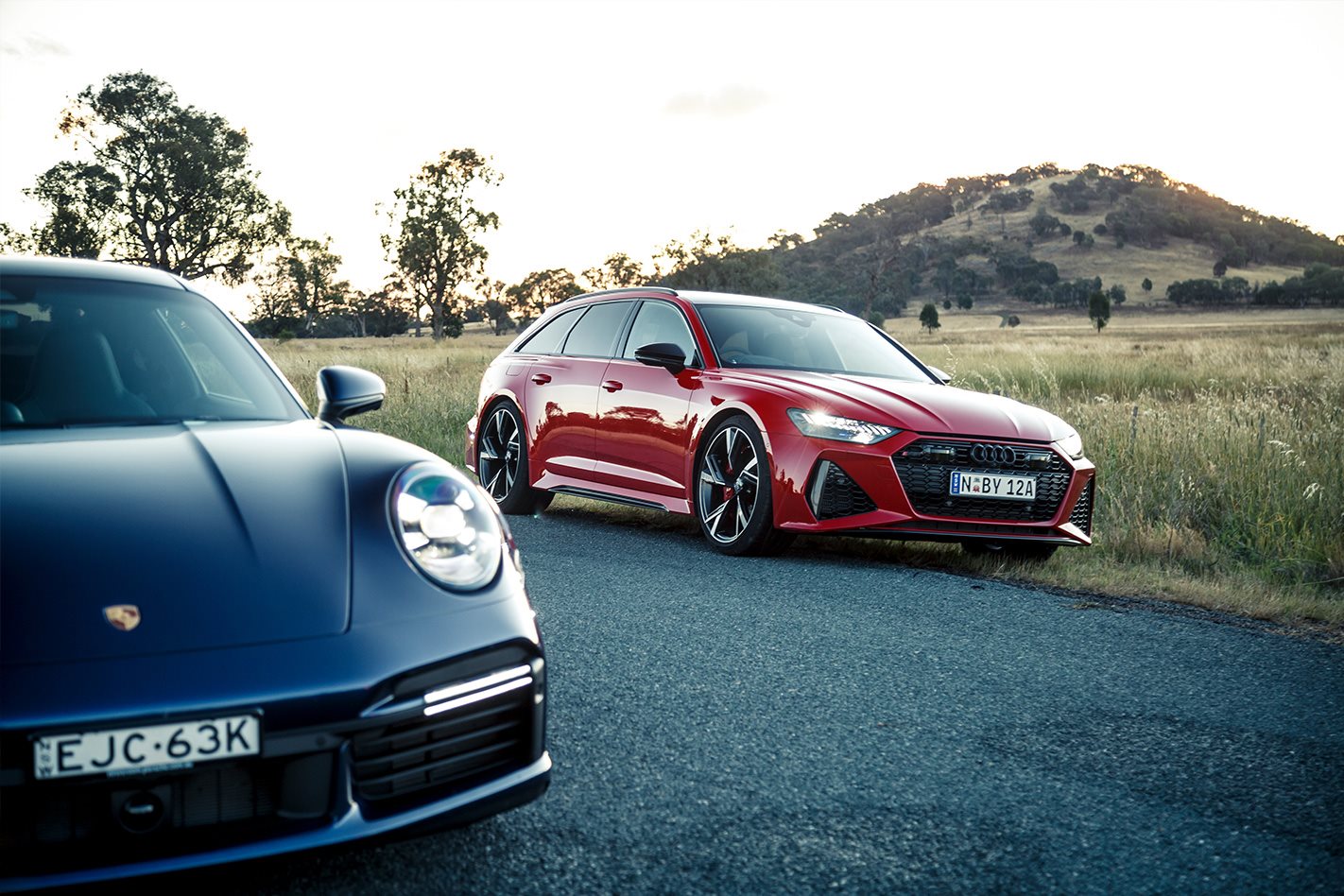 On these roads, I find it hard, even with the optional DRC suspension, to keep the RS6’s 22-inch wheels within the confines of one lane. Thankfully, the carbon-ceramic brakes bite hard and early, while the variable steering is also just as sharp, helping keep rule on the energy at play. However, a drive in the BMW M550i reveals you can’t substitute lightness.

Sure, it’s no feather, but at almost 300kg less than the RS6, it equals superior roadholding and balance. Steel springs steady the BMW well without penalising ride compliance, and its Bridgestone S007s easily paste its punch to the road. But Newman singles out its main problem when swapping over, saying he hates the steering, but loves everything else. I agree, the M550i’s steering is vague, heavy and laboured. But while rear-wheel steering feels superfluous in the M550i, it sharpens the Mercedes-AMG GT R Pro into a scalpel. 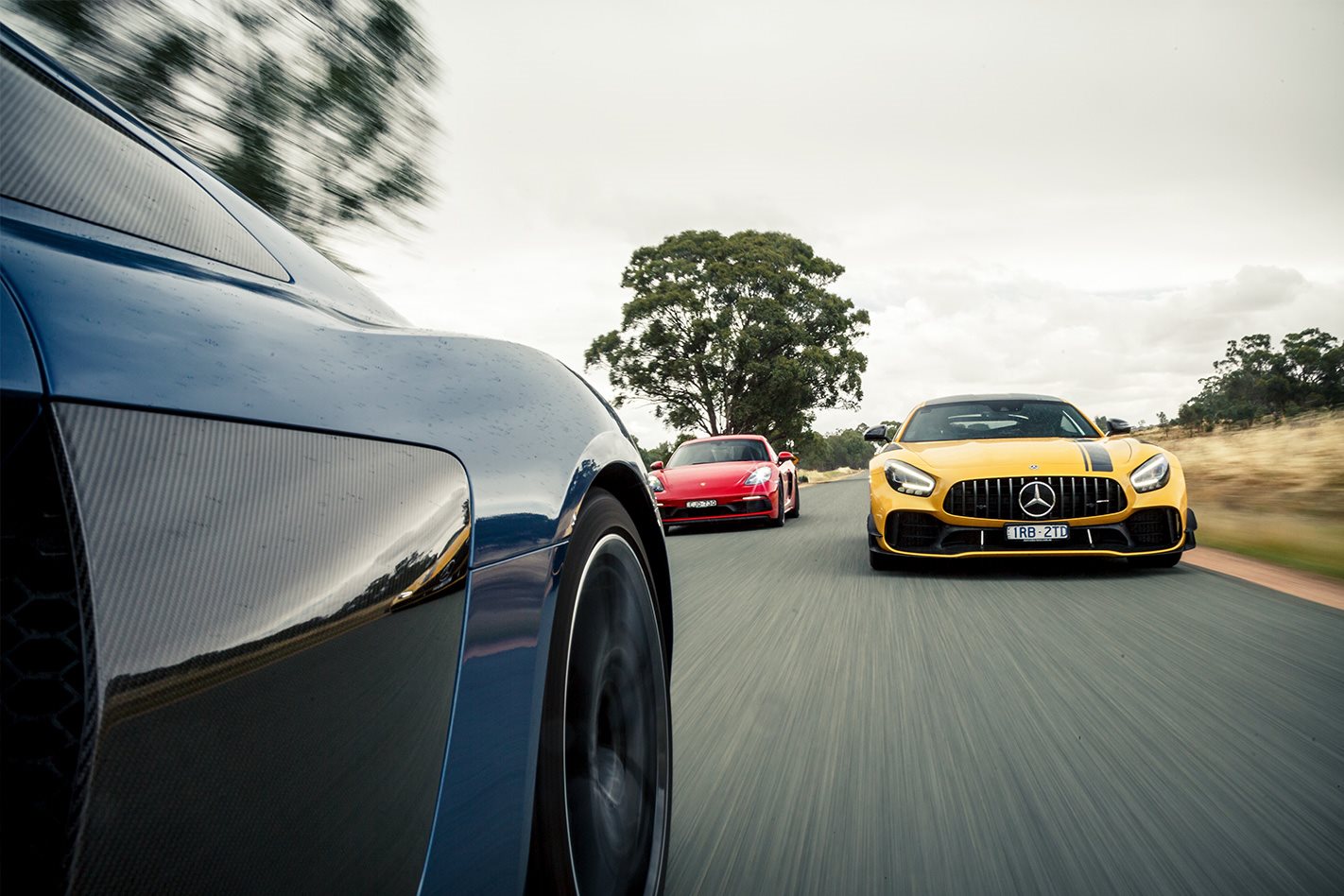 One corner is all you need to see why. This. Thing. Is. Serious. It reacts instantly, with so much response that most corners need less than a quarter lock of steering. And grip is tremendous on Michelin Pilot Sport Cup 2s. More surprising is how the Pro transitions from braking to steering and throttle more coherently than any GT before, leaving no doubt about what it will do.

Despite its hardcore track-bred suspension, you grow comfortable goading the Pro to its limits, enjoying being mashed into the sides of its one-piece carbon fibre bucket seats. The Herrod Performance SM17, meanwhile, presents a stark contrast of accessibility. No road seems long enough to deploy its power and with a relatively soft suspension tune, higher centre of gravity and long wheelbase, it always needs time to settle before powering out.

The SM17 has enough poise to stay straight when it breaks traction at high speeds, but its savagery is hard to finesse on precarious mountain roads. So I find relief in the equally dramatic, but less intimidating, Audi R8 V10 Performance. 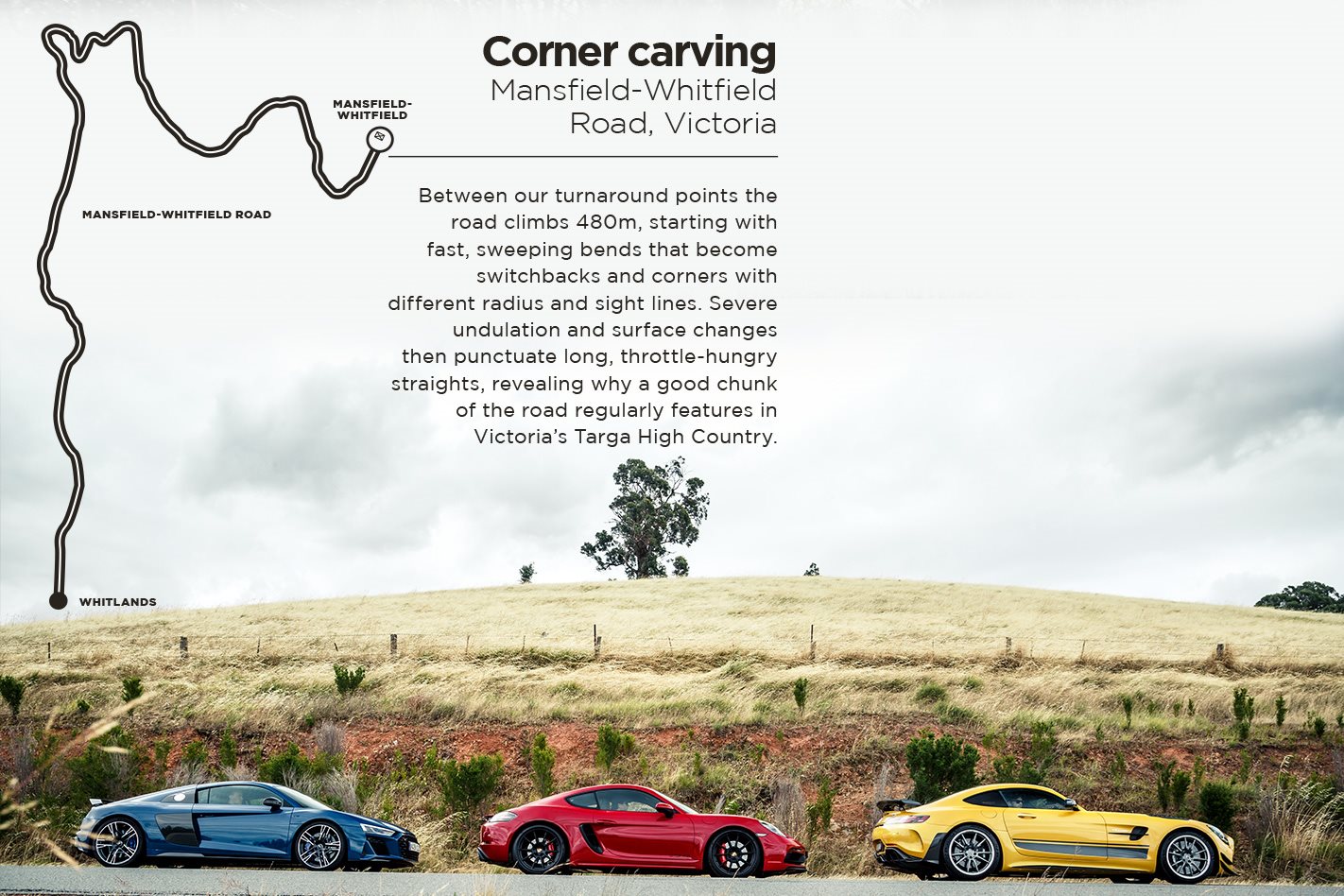 Chassis tweaks only broaden its scope of accessibility. Given the R8’s epic V10 layout and short-stroke dampers, the front-end follows the road with unwavering confidence that, when combined the balance of all-wheel-drive, equals surprising benignity. And it sounds incredible. Yet, while the R8 shrieks with a gravelly howl to 8700rpm, ending conjecture on which car sounds best, the Porsche Cayman GTS 4.0 envelops you in something soulful, mainly because it spends a long time climbing through gears.

Criticism on the Cayman’s tall gearing is well known. However, my joy for its manual goes beyond a precise and mechanical shift action or perfect heel-and-toe pedal placement. The Cayman’s centralised mass and lack of turbo grunt force you to maximise entry speeds, relying on its inherent balance to keep revs high.

That it keeps a Porsche 911 Turbo S in view downhill speaks to the Cayman’s light-footed ability. It’s an intoxicating car to rag and rewards commitment without fear of penalty. And it’s still ‘quick’ in a straight line. However, as I prepare to battle the Turbo S again uphill at the turnaround point, it disappears by the first corner.

In the Turbo S, acceleration is shocking in ferocity, and the engine’s explosiveness is matched with otherwordly all-wheel-drive traction. You get the feeling, however, that the Turbo S’s chassis is focused on deploying its power rather than mesmerising you. Its damping is excellent. Body control is resolute. But like a 992-series Carrera S the nose fights those huge rear tyres for grip at turn-in. 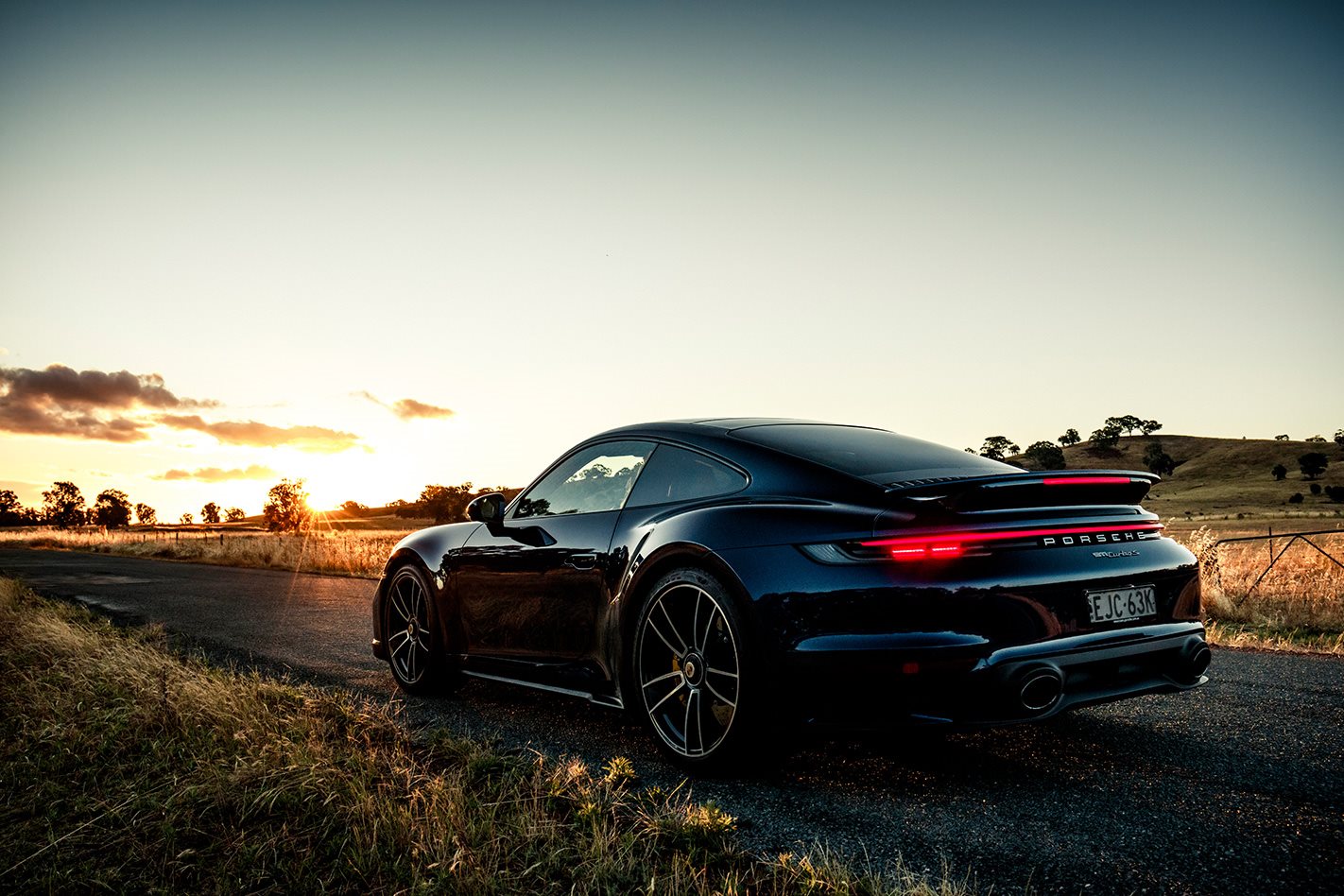 Never, however, does the novelty of its jet-like pace across country diminish. And craving more time with the Turbo S is a fitting way to finish.

With more action to come, some cars will get the chance to reveal a lot more about themselves, while others only need to reaffirm their case. So without further to wait, bring on the track. 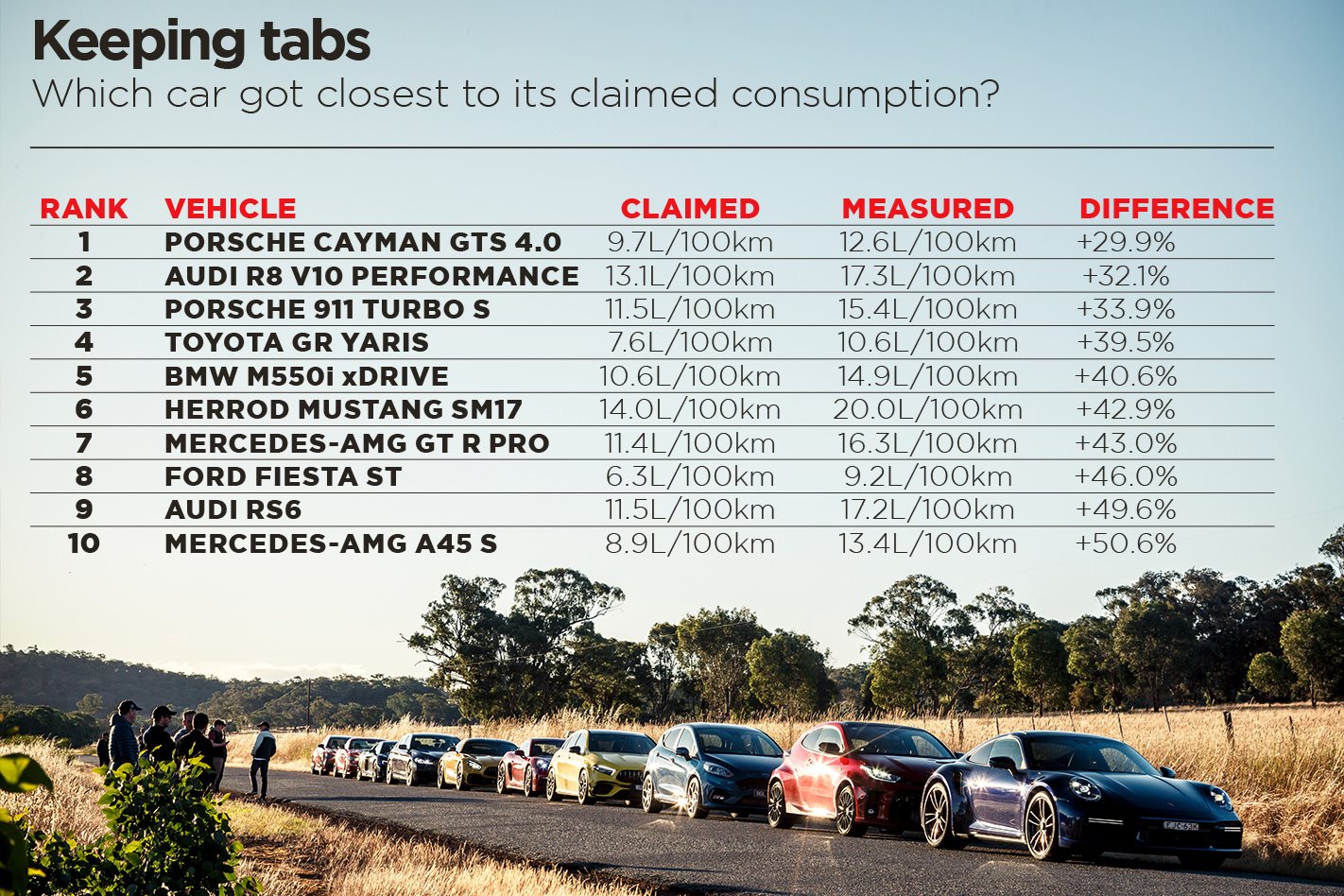