A Porsche 911 won the first ever PCOTY. Here’s why history repeated itself in 2005…

Don’t blame us. If there was any predictability to this year’s winner, it wasn’t exactly our fault.

There just isn’t anything about what the 911 Carrera S does that dips down to even Very Good, let alone Mediocre. Porsche just, consistently, builds better performance cars at this sort of money than anybody else.

Porsches have lost at PCOTY in living memory (911 Turbo, 911 GT2, 911 Carrera and 911 GT3), but they’ve (almost) never lost for lack of urge, integrity, balance, engineering depth or the astonishing manner in which they communicate with the driver. 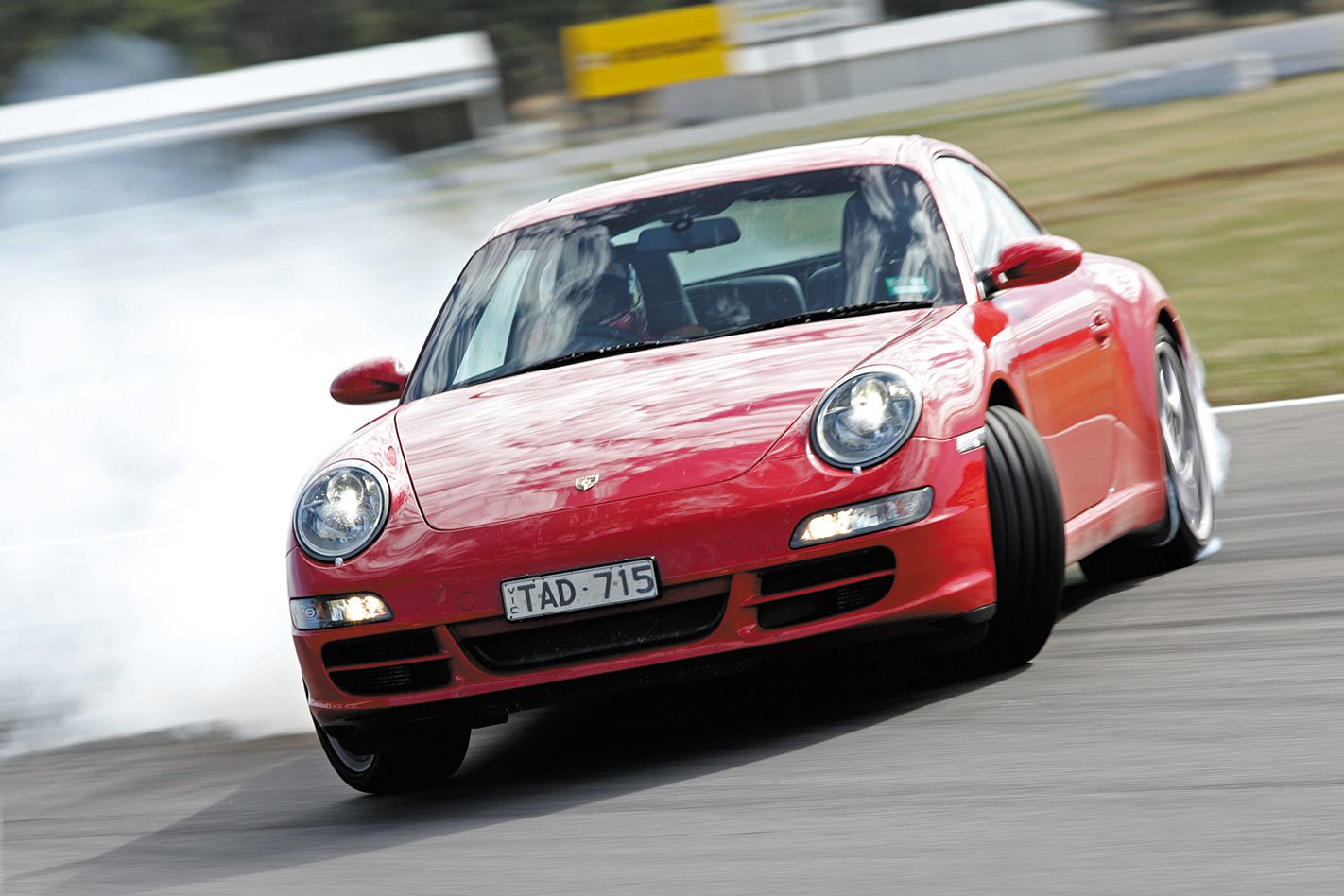 Only the blunderbuss Cayenne Turbo stands out amongst the brand’s PCOTY losers, but even that is easily the fastest, if not the best, of its genre. A quick glance at the scorecard shows the brilliance of the new 911. You can’t afford a single mediocre score if you want to win PCOTY, and it doesn’t have one.

This will go down as the PCOTY that was dominated from the first turn of the key by one car. At least, that’s how my memory has it recorded. After day one, the 997 911 Carrera S was proudly laying open its heart, soul and ability to the judges, daring them to find fault enough to hand the trophy to something else.

And the judges tried to take up the challenge, heavily considering every other top six car, even in the most unrealistic of positive lights, in an effort to get something to bridge the gap and take up the challenge. Nothing did. Perhaps the EVO VIII came closest, with its endearing mix of sheer speed, low cost and hard-won attitude.

But the margin in quality, class and driving purity was too large to be bridged by a car which, no matter how clever the driveline and chassis engineering, remained a lot of fancy gear plonked into a chassis full of mass-production compromises. Such engineering compromises just don’t happen in proper (read: non-Cayenne) Porsches, and it shows. 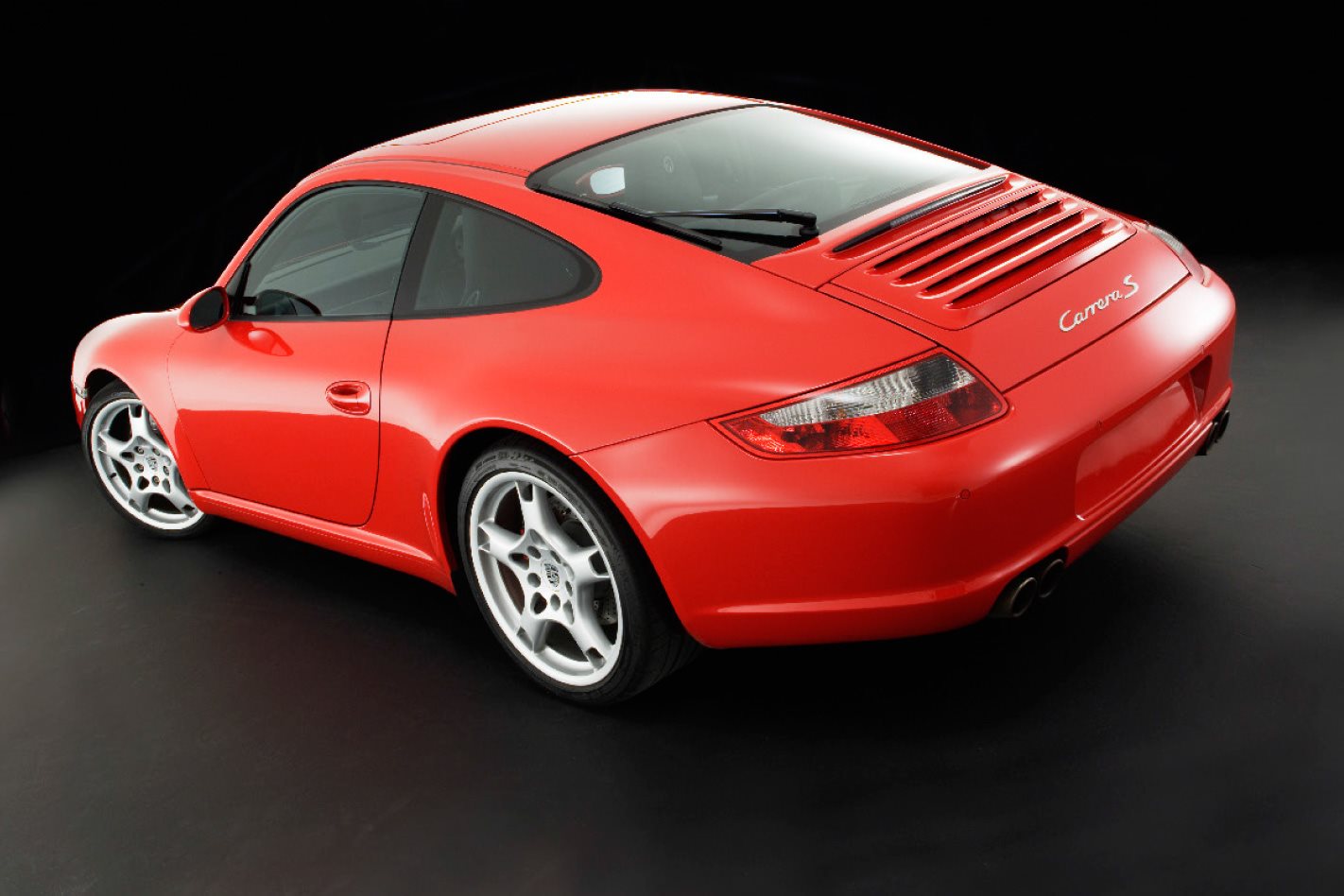 While the new 911 perhaps doesn’t have the same steering tactility as its predecessors, it’s still got multiples more than anything else here. Perhaps it is harder on its tyres than the last model as well, but that’s fair, because it generates more mid-corner grip.

Perhaps now, finally, the one-size-fits-all seating is starting to feel like it could use more lateral support. And, perhaps now, these are piddling, picky flaws arrived at mostly through the need to find fault to make the car seem, well, less dominant. Less than perfect.

On the track, it’s hard to criticise. It picks up the track-spec Exige’s challenge and belts it by almost a second a lap. Then it comfortably drives off into town, leaving the Lotus pilot jiggling, trying to crank the stereo to counteract its lack of sound deadening. The brakes just don’t go away – and at 1420kg, the 911’s not as light as once it was. 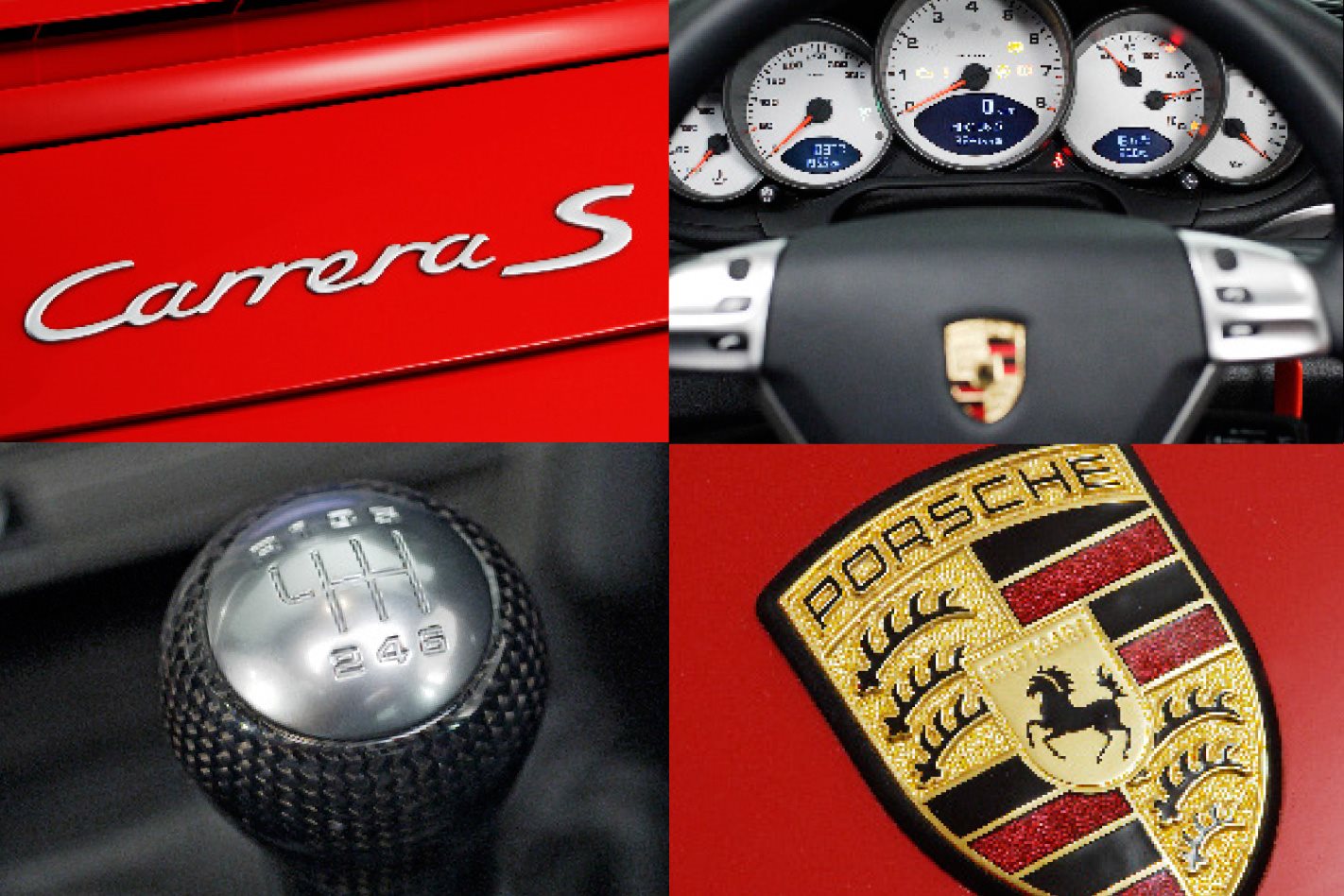 In the grand scheme of cars like the Lamborghini Gallardo and the Ferrari F430, it’s looking cheaper by the day. Maybe the Boxster Coupe might change that perception but, until then, this is as good as it gets.

Anyway, it ties a 575M Maranello to 100km/h (in 4.85 seconds), wallops the impractical M3 CSL to run a 13 flat standing quarter mile and, of the cars that have crossed the standing kilometre faster, only the supercharged E55 AMG is anywhere near the money.

But the straight-line speed comes, truthfully, as an addendum and maybe even a bit of a surprise. It’s a total package, and the acceleration numbers don’t seem that important when you’re driving it. Instead, it’s an experience dominated by feel, by solidity of engineering, by balance, poise and sheer class.

The engine is something else; it’s flat in the torque curve with just the right menacing hint of vibration to tingle the driver whenever it’s idled, let alone stirred to anger. And the harder it’s driven, the less vibration there seems to be. 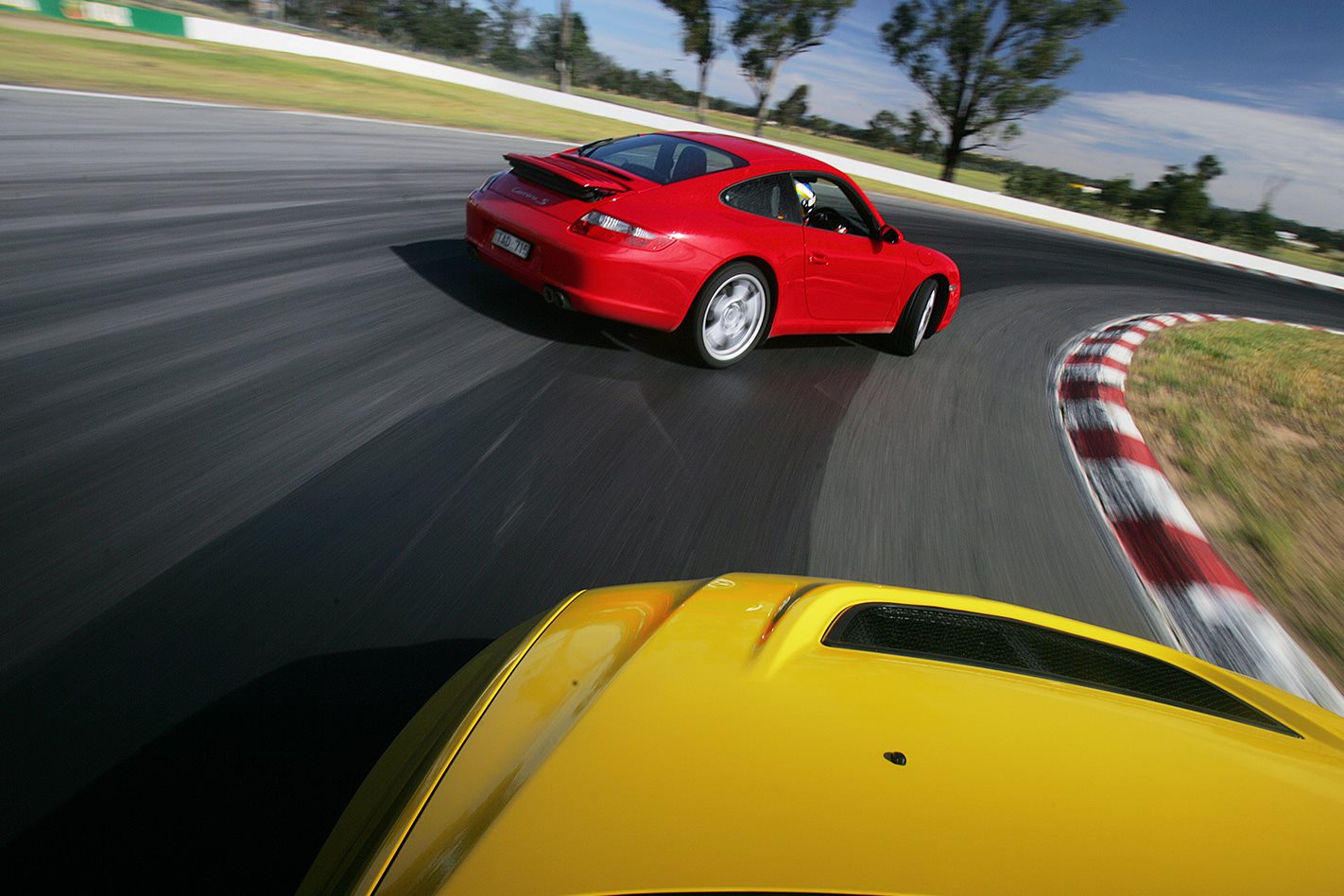 The note turns into a penetrating, buttery howl, changing timbre at every minute alteration in crankshaft speed and spinning so freely that the impact with the rev limiter always seems like a surprise, and you feel like it’s robbing you of at least another 2000rpm of this six-piped theatre.

But the shift action, and perfect ratio spacing, compensates you for the theft. The lever moves almost without effort, through nothing more than instinct, through gates sculpted to be unmissable and that you use again and again for no other reason that it gives you pleasure and appreciation of craftsmanship to do so.

Then there’s the chassis, engineered to death to keep a relatively impractical design at the forefront of the world’s leading sports cars. Nothing else available this side of a Gallardo gives the same constant stream of information back to the driver – and does it in a manner simultaneously so masculine and so unambiguous.

It’s both strong and subtle, and it needs to be, because with grip like this, the stakes are incredibly high and the desire for accurate feedback becomes a demand. So beautifully crafted is this car that, in the end, it isn’t dominated by any single component. 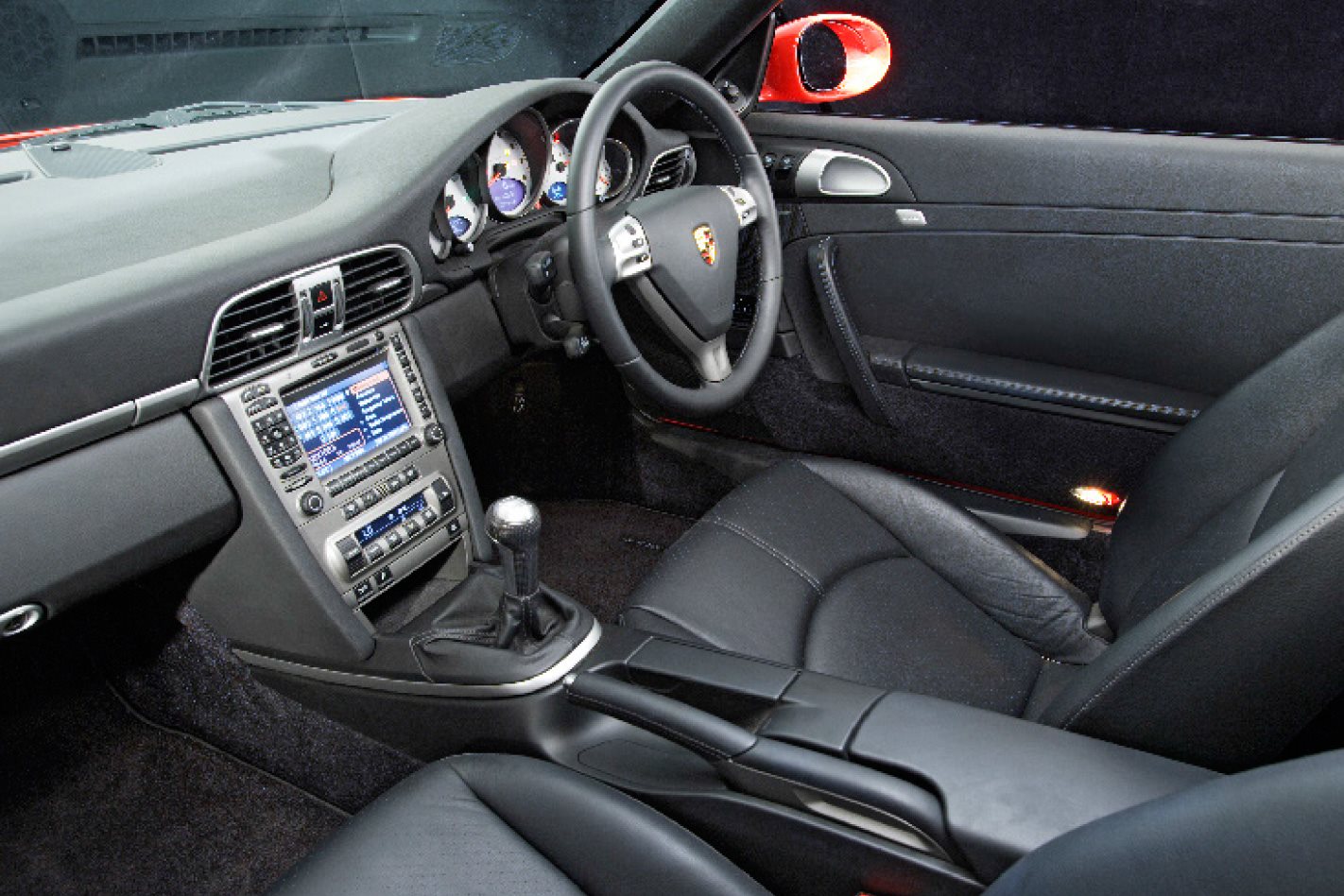 Its chassis balance is so precise it can live with a driver leaning on its nose or carrying the tail in delicate drifts, either on the track or on the road (and its Porsche Stability Management skid control system is a salient lesson to other German companies on how unobtrusively these things should work in sports cars).

The engine, too, is so linear in its delivery and strongly torque dominated that there’s always enough urge – and intuitive levels of throttle response – to drive it on the throttle everywhere, under any circumstance. The brakes, too, can be modulated to within poofteenths of perfection.

Why? Because they’re forever telling you how much grip is left, how much pedal pressure to use and making you look good. Also, they just never, ever go away. The steering wheel is nigh on perfect for diameter and thickness, and swamps you with everything you’d want to know about the road beneath you, including the names of the guys who built it and where they had smoko.

The bloody thing’s also got the hide to ride better than half the cars we had on PCOTY, even if there’s a fair whack of rear tyre noise. It’s a great car. Not quite perfect but bloody hell, it’s getting close. And it’s more than good enough to clean sweep PCOTY 2005.

JESSE TAYLOR- A brilliant package with no one dominant area. It doesn’t quite supplant the Gallardo as the best car I’ve driven, but it runs it tight. That’s my new fantasy garage. I voted the Lancer EVO VIII into second and gave the HSV ClubSport the bronze medal.
MICHAEL TAYLOR - How could this not be the PCOTY? It’s so comprehensively brilliant that it would have, almost certainly, won any of the last 10 PCOTYs. Its only credible competition, we’ve since figured, might have come from the stock 911 Carrera. But it wasn’t here.
DAVID MORLEY - Two things took the 911 to number one for me: pedigree and sex appeal. Okay, so it’s still pretty much a two-seater and the luggage space isn’t huge and it’s tricky to get in and out of and it’s expensive, but to hell with that. This is the best 911 yet.
DEAN EVANS - I bet $1 the Exige would be fastest around Winton. And the Carrera S just blitzed it! I love the underdog, but the 911 does everything – it’s hard to fault. But $220,000? Nah, I’ll have a C55, STi, ClubSport – even a base Carrera on 19s – and pocket the change.
TIM ROBSON - Feeling hard done by the Carrera S’s win? Get over it. It’s quite simply one of the best cars I’ve ever driven. The much vaunted rivalry with the EVO VIII didn’t materialise, the Carrera S was just too damn good in every respect. Is it our fault the 997 is so right? 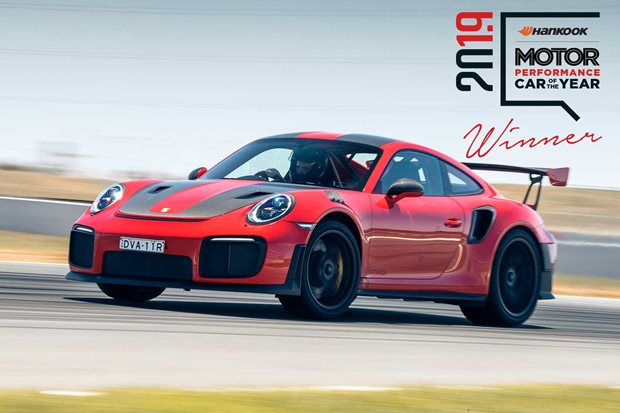 The GT2 RS had the weight of expectation and a mega price tag to overcome, but the ultimate 911 bewitched all to claim the title