THE route the Oodnadatta Track follows through South Australia’s sparse north reveals an important chunk of modern Australian heritage, and it’s the ideal excuse for an outback trek.

It’s a relatively easy one, too. In good weather it’s even capable of being driven in a Commodore or Kombi, so it’s not too ambitious for travellers new to remote-area travel.

Arriving from the south the O’ Track begins at Marree, but chances are your adventure would have begun near Port Augusta.

From here it follows the southern section of the Old Ghan Railway Heritage Trail along the bitumen through Leigh Creek, Lyndhurst and Farina, a relic town that – surprise, surprise – has a pop-up bakery. The Birdsville Track branches out from Marree, too, as does the Strzelecki Track at Lyndhurst. The fantastic Flinders Ranges aren’t too far away, so doing the Oodnadatta can be spliced into a longer outback adventure.

The Great Northern Railway supplied cargo to Marree and its surrounds from the 1880s; the return journey took livestock bred in the area to market in Adelaide. Marree was the rail-head for a time, but eventually the railway was extended to William Creek, Oodnadatta, Alice Springs and beyond.

In use for around a century, the old (and now the new) railway is known as The Ghan, a colloquial nod to the Afghan cameleers who did so much to open up Australia’s interior in the 19th century. Several old Commonwealth of Australia locomotives remain at Marree, reminders of the town’s railway era, which ended in the early 1980s. As is the case for many outback towns these days, tourism keeps the dollars coming in. There’s a railway museum, too (closed when we visited), and the pub has a display room dedicated to the legendary Tom Kruse, the Birdsville mailman. One of Tom’s old 4x4 Blitz trucks also stands in Marree.

You’ll find roadside sculptures made from junk – old aircraft, water tanks and car engine parts – about half an hours’ drive north of Marree. The Oodnadatta Track closely follows the route of the old railway, and the many culverts and bridges you’ll see beside the track during this trek are testament to the efforts of the workers who built and maintained the railway – keep in mind the lines were laid with major manpower and minimal mechanised equipment. 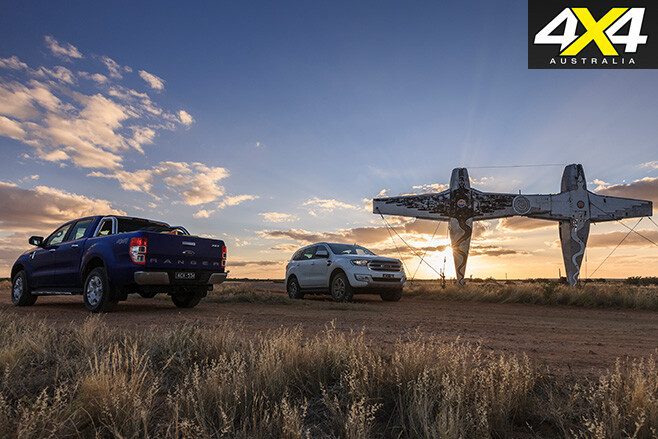 Beside one of these bridges is an ideal campsite, as it was for us on our first night under the stars down the road from the Lake Eyre South lookout.

Hardly noticeable in the flat light under uncharacteristically grey skies, there was just a shimmer of water on the hard-baked salt when we stopped for a look the next morning. Kati Thanda-Lake Eyre (and Lake Eyre South) fills once every decade or so within the lake’s catchment that stretches into NT and Western Queensland’s channel country – it’s worth the trek to see this normally arid region burst into life. 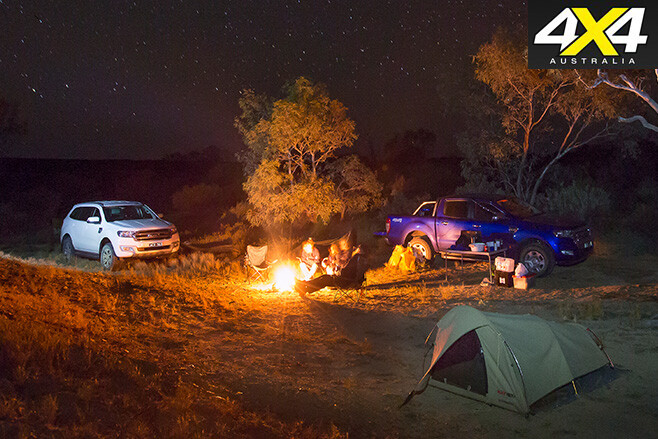 Our time on the Oodnadatta Track came just days after it was re-opened to 4WD traffic following recent rains. A particularly wet and cool year meant there was plenty of water in the creeks to keep the wildlife happy.

Remnants of the Great Northern Railway’s century-long operation are scattered along The Old Ghan Heritage Trail. One of the larger historic sites is Curdimurka Siding, where the workers’ accommodation – a grand, old stone-and-timber building with a corrugated iron roof – remains in good condition. However, we were annoyed when we discovered a fire was still burning in one of the fireplaces; potentially devastating for this fragile, wooden-framed building.

Coward Springs is another railway siding site on this vast expanse of Australian outback. These days it’s a privately run campground with several tidy sites tucked between the trees. We happily paid the day entry fee ($2pp, or camping is $12.50) for a loll around in the springs’ warm, pump-boosted spa bath. There was once a pub here, but it was demolished in the 1960s. We couldn’t stay, but this great little spot is on the list for next time. William Creek was an important stop for the train, and it remains so – fuel is out front, beer is in the fridge, and tucker is out back. Adjacent to the roadhouse are basic campsites, but there’s also more salubrious accommodation if you’ve been dusty for a week or more and feel like a reprieve from the track. An airstrip with charter flights is available for flights over the region, including, of course, Lake Eyre.

Our camp for the evening was further north at another great bush camp by Edwards Creek. We rolled out our swags on the grass next to an old windmill, and with some flood-washed wood collected from the dry creek bed we made a modest campfire. After a few bevvies, rain cut our night short. Yes, it does rain out here!

We were obviously spared heavier rain that night, as there were large puddles of water lying across the surrounding hard, stony country as we got underway the next morning. Our two vehicles moved around a little on the track, and we were mindful of sharp edges in some washaways, as we continued following the line of The Ghan toward Oodnadatta through country that became more rolling and varied. Building the bridges and culverts through this country would have been an enormous challenge for railway workers 130 years ago. The most grand of these structures is the Algebuckina Bridge across the Neales River. There’s plenty of space for camping here and there was a multitude of birdlife playing above the ponds when we went through. However, the sun-baked girders and frames of this staunch, old bridge evoke images of a totally different scene when summer temperatures out here reach more than 40°C.

After a quick top-up at the Pink Roadhouse in Oodnadatta we ventured on, turning north off the Oodnadatta Track (it continues, eventually joining the Stuart Highway’s bitumen at Marla) and heading toward Finke and Alice Springs. Like us, you should easily find a suitable place to roll out the swags and witness a sensational sunset.

We’d crossed plenty of dry creek beds on the trek so far but Stevenson’s Creek, which we happened upon the next day, was probably the largest of the trek. It wasn’t flowing, but piles of sand bulldozed to the side of the ford testified to recent flooding. Several remaining lagoons were keeping the budgies twittering, and it looked like a terrific place for a night – or three – of relaxed camping. 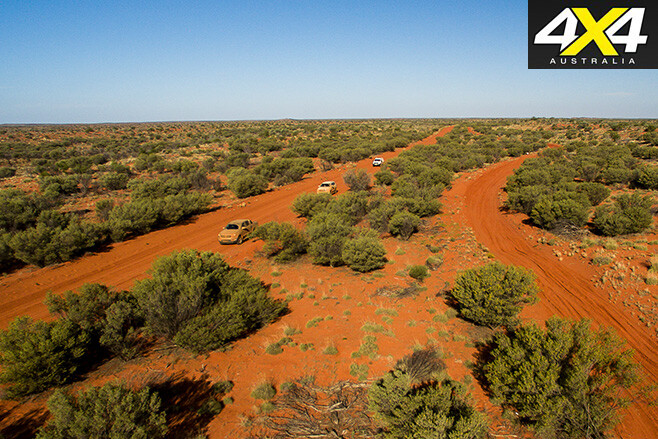 The remainder of our day’s driving was across the ever-changing terrain of rocky plains and rolling hills. Yep, the mud meant one or two diversions from the main track, and by the time we’d wandered past the Lambert geographical centre of Australia and the community of Aputula (Finke), the views were of distant hills and low scrub. The track, by now, had become a sandy grid of suspension-pounding corrugations – easily the worst of the trek.

Keen to be within easy striking distance of Alice Springs for the next morning’s drive, our last camp was in the shadow of sand dunes adjacent to the Finke Desert Race track, around 100km south of Alice.

WHERE
The Old Ghan Heritage Trail covers more than 1300km between Quorn, SA, and Alice Springs, NT. North of Marree, the trek is dirt.

CAMPING
Bush camping is possible along most of this trek. There are campsites with some facilities at Marree, Coward Springs, William Creek and Oodnadatta. 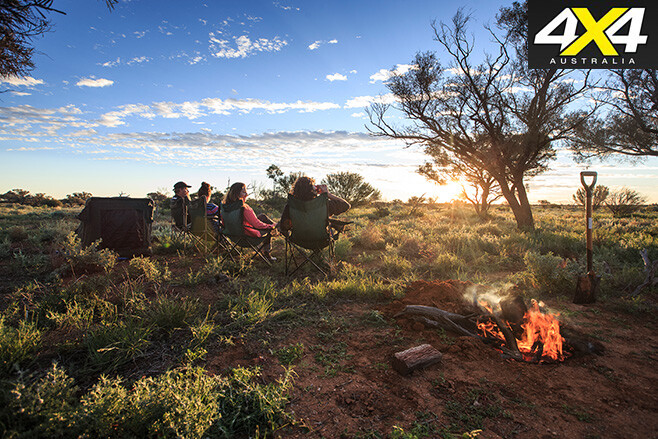 SUPPLIES AND FACILITIES
The Old Ghan Heritage Trail traverses a remote area and you are advised to be 100 per cent self-sufficient for food and water. Summer temperatures can soar beyond 40°C, so it’s best to visit between April and October. Fuel and limited supplies are available at Marree, William Creek and Oodnadatta.

TRIP STANDARD
Conventional sedans can visit the Quorn-Marree and Oodnadatta Track sections of this trek in good conditions, but durable high-clearance 4WDs are required between Oodnadatta and Alice Springs via Finke. Roads in this area are subject to severe weather conditions, and they can be incredibly corrugated due to the sandy base and traffic to and from the Simpson.