The VR Commodore is a smarter car all around than its predecessor – and not just because of a mega boost in computer power. From airbag to flush bumpers, Wheels evaluates the $100 million revamp

This is more than a mid-life nip and tuck to firm up a sagging face. With VR, Holden delivers a whole package of improvements, affecting every one of the car's major mechanical systems, and a bunch of sub-systems as well.

VR is also the first Australian-made car with a driver's side airbag. 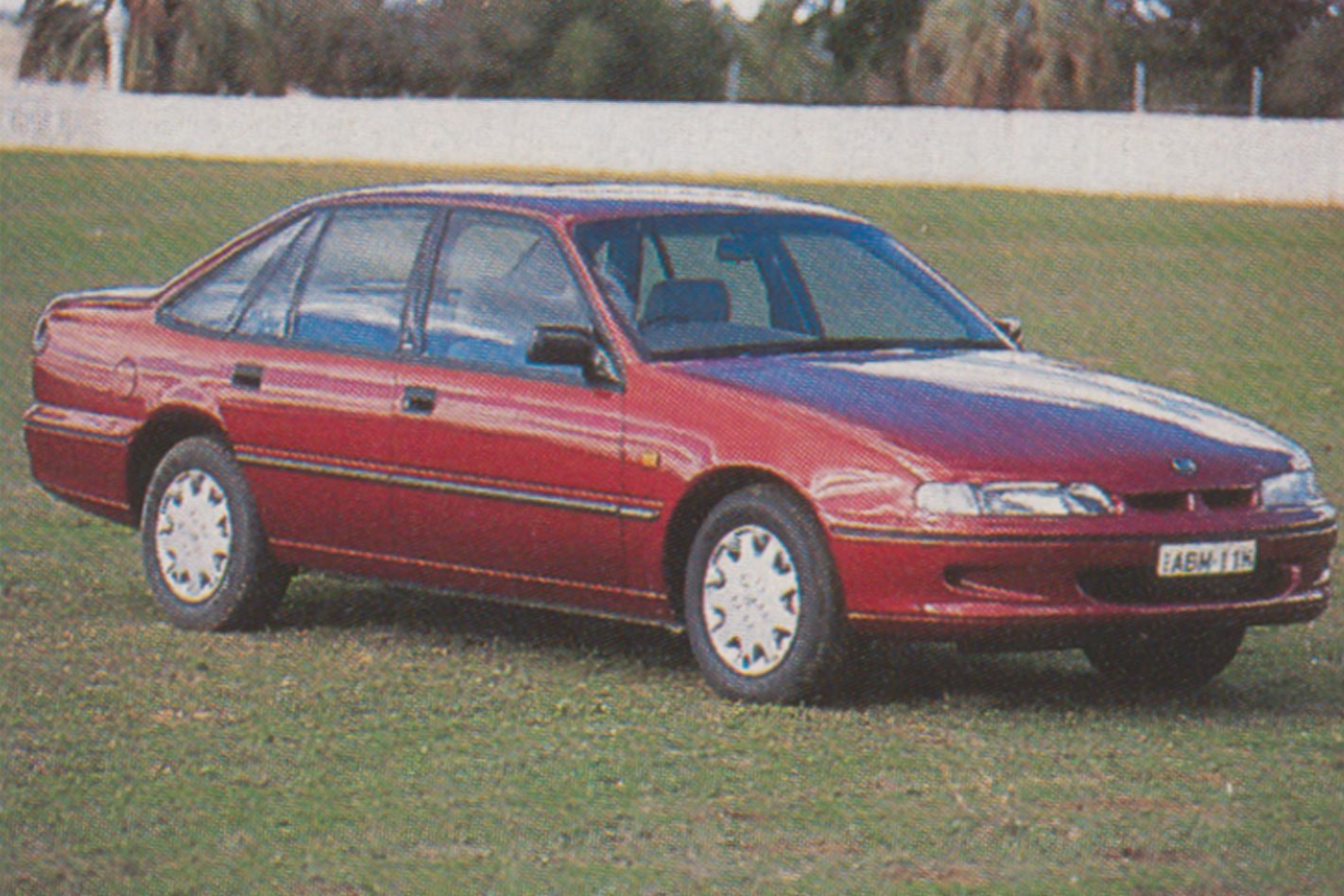 There's extra breadth to the Commodore range too, with the addition of a new model – badged Acclaim – to slide between the base Executive and the midlevel Berlina models. The width of Holden's work is matched by the length of the bill. There are 100 million notes riding on VR. And that's just the sum invested in plant and equipment. Not included, for example, is the cost of 1.5 million km of durability testing or 45 crash barrier tests.

The majority of those barrier tests were needed for calibration of the airbag's electronic sensors. It must recognise – reliably – the particular G force pattern generated by a head-on VR impact serious enough to warrant airbag deployment. All components of the system are imported but VR's airbag is specifically designed for protection of Australian – read seatbelt wearing – drivers. The airbag will be standard on Acclaim and Calais sedans and wagons. In Executive and Berlina, the bag will be a smartly priced $990 option; choose ABS as well and the paired safety features cost $1500. Two for the price of one-and-a-half!

But the bag isn't the whole VR safety story. There are webbing clamps on the front seatbelts and a lap/sash belt for centre rear passengers in sedans. Here Holden is playing catch-up, matching the measures introduced by Ford in the EB2 upgrade package last year. There is no doubt VR is a better car to crash in than VP Series II.

VR is also a better thing to drive, mainly because of its drastically modified front suspension. The geometry of the front struts is altered in almost every respect. Castor, camber, scrub radius, roll centre and track are all changed, addressing every one of the criticisms Commodore has endured since the 1988 launch of VN. So it's goodbye to the Holden's hallmark tum-in twitch. 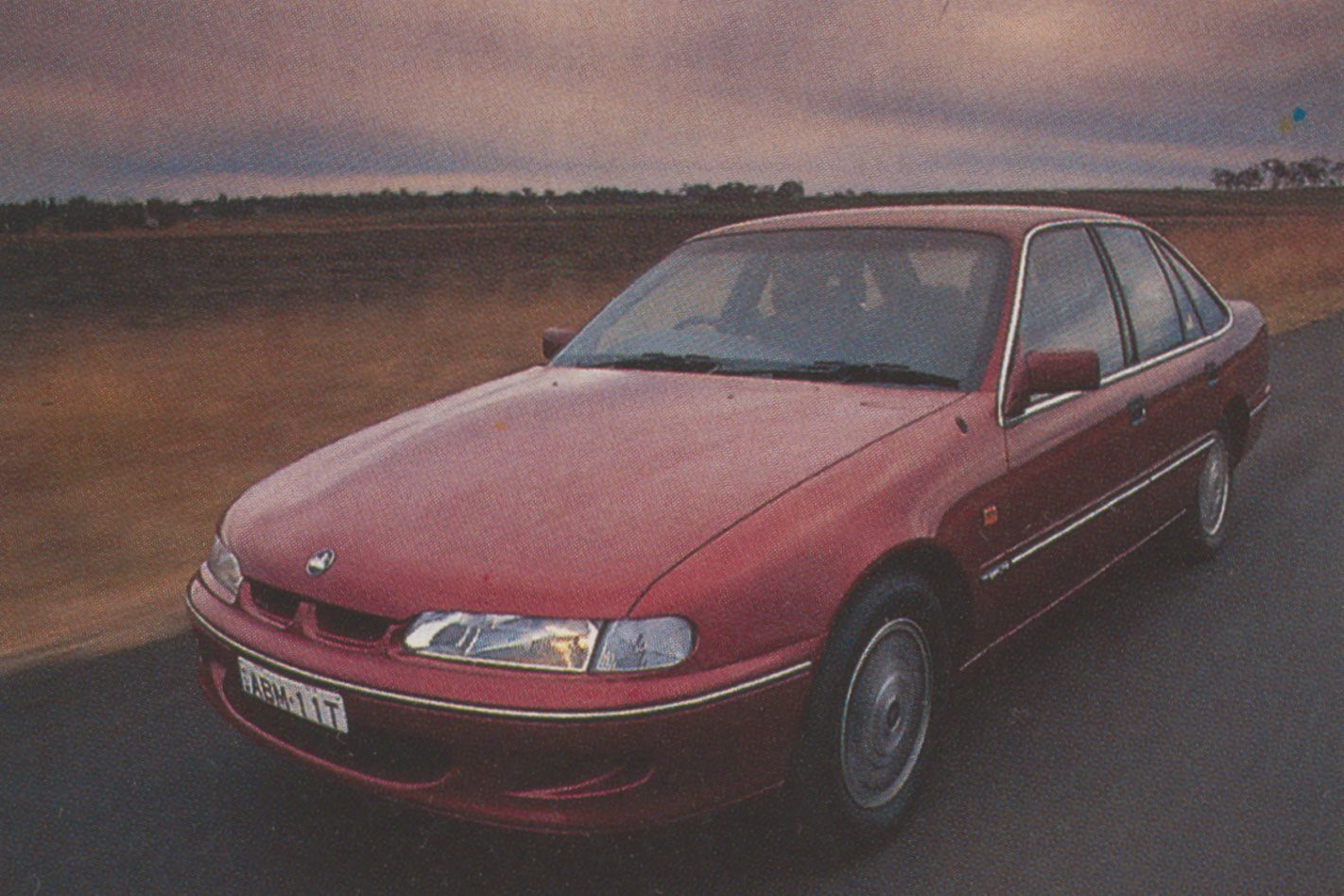 And it's hello, at last, to an electronically controlled dual mode automatic transmission. VR's 4160-E is the same Hydramatic box that Commodore has always employed. The addition of full electronic shift control shaves 3 kg from its weight.

The new box is controlled by the same, all new computer which manages the engine. The IPCM 6 powertrain module has 64 kilobytes of random access memory, four times as much as the VP Commodore's computer, which oversees the engine only. This leap in computer power has allowed Holden engineers to make the VR's auto one smart tranny. It is able, for example, to compensate for the inevitable wear as the transmission ages.

The computer ensures that shifts are as crisp at 100,000 km as at 100 km by measuring shift duration and matching time taken to values pre-set in the computer. The other benefit is that there will no longer be variation in shift points or shift quality from transmission to transmission, because of slight differences in assembly tolerances and adjustment. The egalitarian electronics make all auto VRs equal.

And should the IPCM 6 brainbox flip out, there's a fallsafe mode. When a glitch occurs, the transmission defaults to third gear and allows the manual selection of second. 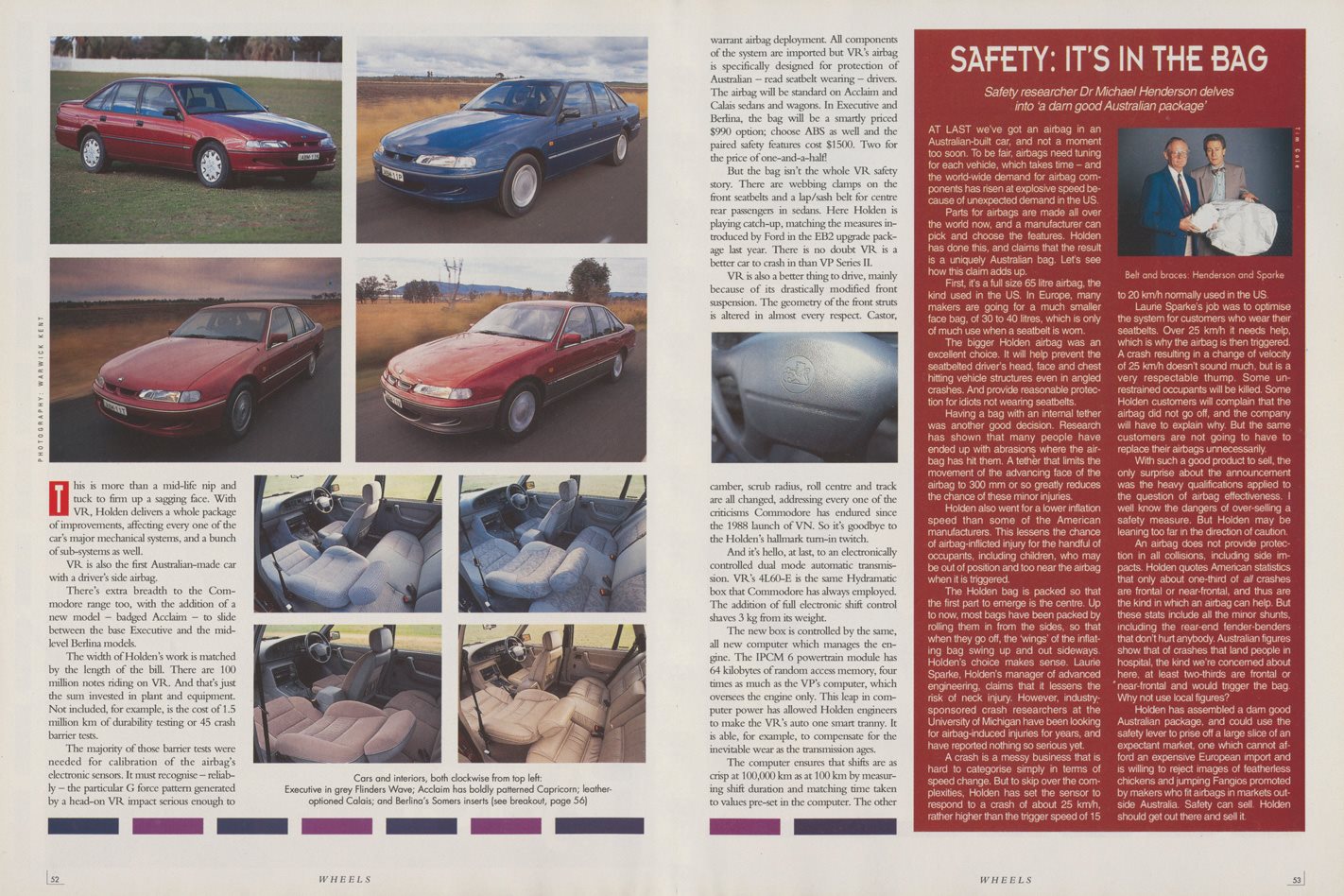 With quadrupled computer power, there were bytes to spare for better engine management of the V6 as well. The V8, updated in September last year with new manifolds, fuel rails and improved engine control software, remains as is.

The make-over of the V6 is even more comprehensive. Spark control has been fine-tuned, to improve both performance and detonation avoidance. The extra power also allows for grouped fuel injector firing, which reduces emissions and improves idle quality. It also permits the use of more sophisticated software algorithms, the mathematical formulas the computer uses to make its calculations. Put simply, it means more factors are taken into account before plugs spark and injectors inject. Stuff like information from the new heated exhaust gas oxygen sensor, which gives more accurate data on the 02 content of the exhaust. The result? Lower emissions. Other computer systems in VR are overhauled too. Diagnostics are more sophisticated than VP; the body computer, among other things, makes it even tougher for thieves and has headlight auto-off to save flat batteries.

There have been changes to engine hardware, as well as software. Compression ratio of the V6 is up from 8.5:1 to 9.0:1 with the introduction of new pistons wearing equally new rings. The pistons are connected to the crank by more rigid rods with tighter gudgeon pin bearing clearances, with benefits in reduced engine noise. The noise curbing program extends to the valve gear, where roller rocker pivots cut clatter. They reduce friction too.

Combine all the new efficiencies and friction reduction measures and you're looking at a drop of around five per cent in fuel consumption. And the damned thing was already creditably frugal ... 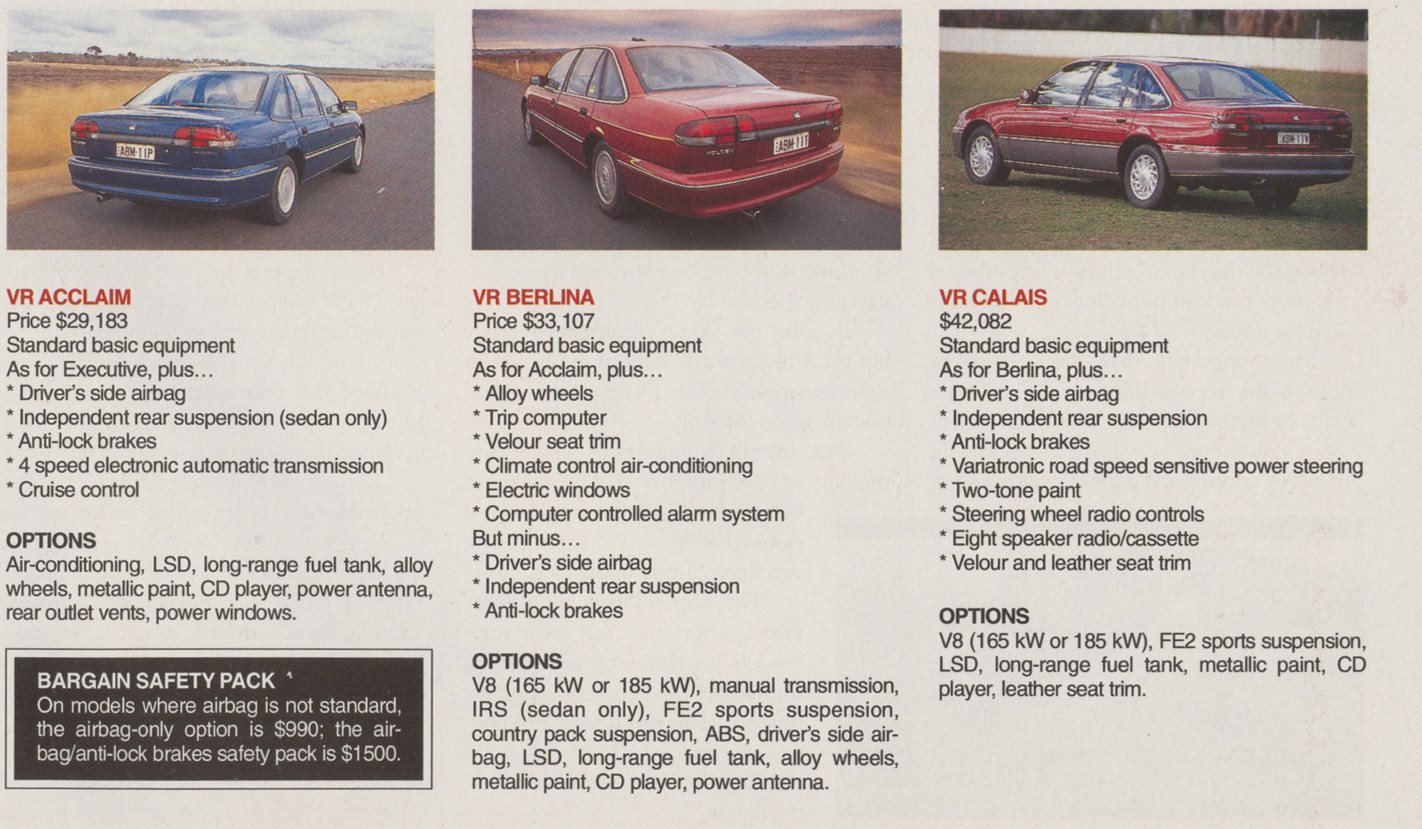 Back to back testing with a VP Series 11 V6 indicates the VR is a shade swifter than the old Commodore. The bolstered torque curve, handful of extra kW and crisper shifting of the electronic gearbox endow it with a 0.3 second quicker standing 400 metre time. The new car's averaged time was 16.8 secs. To 100 kmlh VR was half a second swifter. The new Commodore was also a shade faster through our rolling start increments.

Since the transmission's Power/Economy mode button doesn't affect full-throttle gearchange points, the setting doesn't alter ultimate performance times. What the console button does change is part-throttle change points. If the engineers had had their way, the VR wouldn't have had a button at all- in their opinion, the powertrain computer is smart enough to figure when the driver needs performance and when he's after economy. The marketing men won the argument. How will the punters know it's an electronically controlled transmission, they asked, if there's no button?

The VR proved quieter at idle and during hard acceleration than the VP Series II, by two decibels. That's a difference the ear will easily discern. The VR was also between 1 and 2 dB quieter at a steady 110 km/h. There seemed slightly less wind noise in the new model. Only at a steady 60 km/h were the VP and VR line ball. 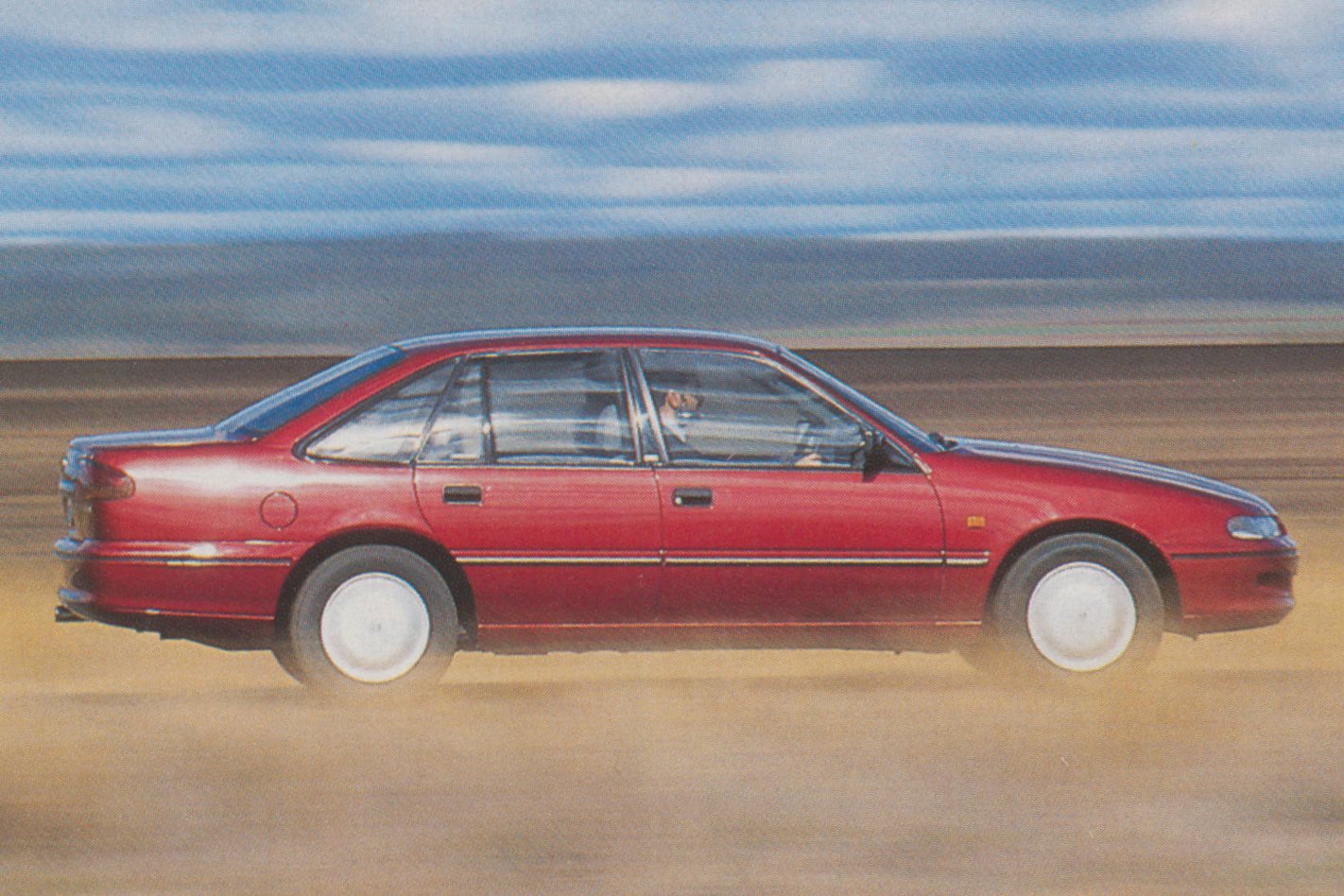 The quietness of VR, particularly at higher speeds, must in part be due to its more precisely built body. Both panel gaps and panel flushness are improved over VP. Both are contributors to wind noise.

Better panel die technology and additional robotics are credited with the tightening of the Commodore's shut lines. The change is immediately noticeable. You won't need a set of digital vernier calipers to find the difference between old and new. Along with the sheet metal changes to nose and tail come better fitting plastic bumper fascias. Honda assisted Holden with the creation of the large and expensive moulds for both ends of the car. The new parts fit flush and must therefore be made with greater accuracy.

Though designed here, VR's new headlights are made in Korea. The lenses are glass, despite an international trend towards hard, clear plastics. Holden's engineers know that the guts of Australian bugs are unusually corrosive and that plastics subjected to long and repeated splatter attacks would eventually be affected.

New plastic parts also create the most striking impression inside VR. The dash top moulding,  including the instrument binnacle, is an all new design. It looks much better, despite variable success with fit in the pre-production run cars sampled. There are no longer face level vents at the dash's extremities. The outboard vents now reside in moulding; screwed onto the front doors. 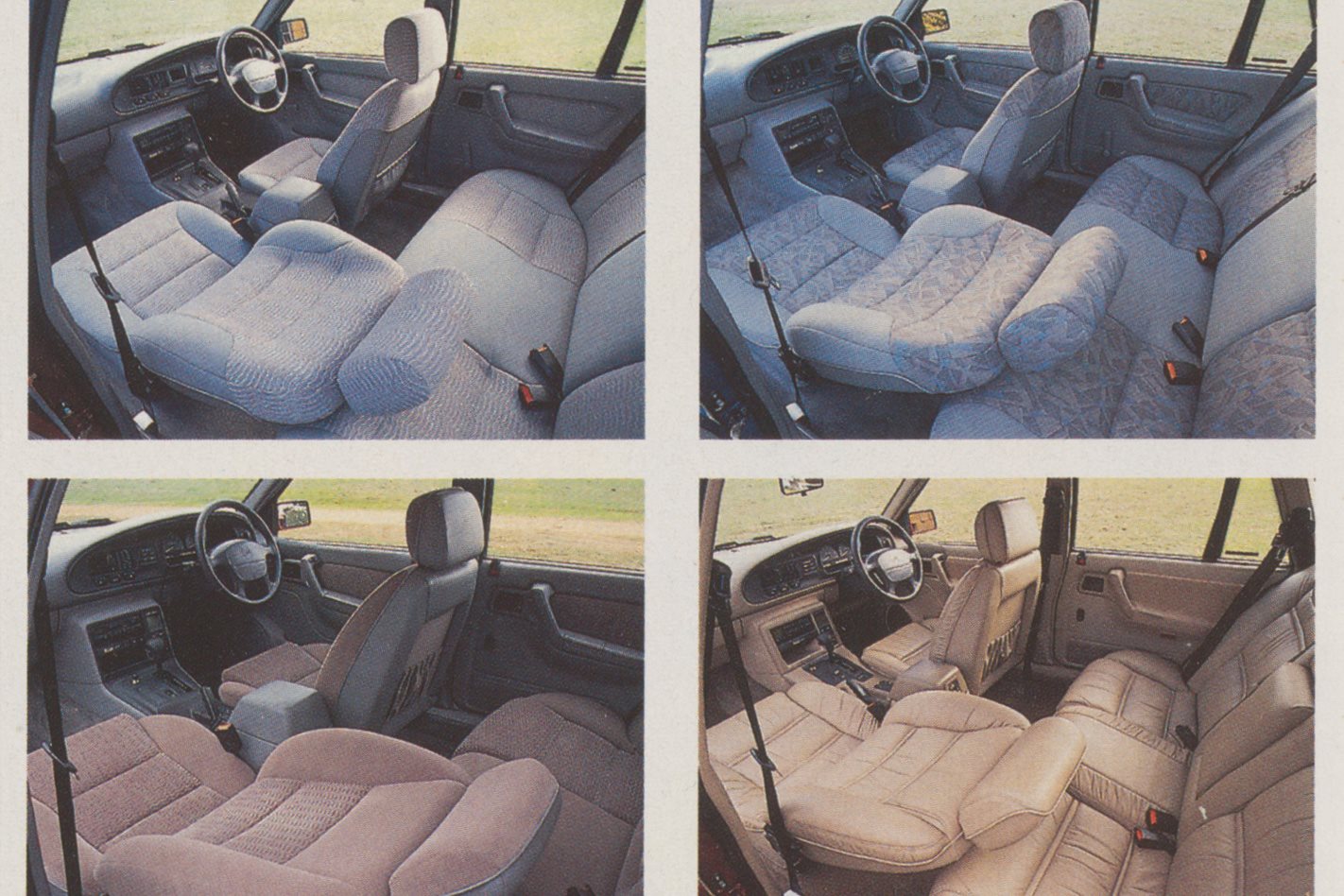 More important than the new dash's looks is the repositioning of the switches formerly sited at the sides of the instrument pod. Commodore now has a left hand stalk for wiper control, including the rear wipers of wagons. All cruise control switches are incorporated in a new right side stalk. And Calais gets basic radio controls mounted in the steering wheel boss.

While the new dash layout is an ergonomic and aesthetic success, the airbag steering wheel isn't. Its bulky boss doesn't look too offensive, but the wheel isn't pleasant in the hands, its topmost spokes obstructing natural hand placement on the rim.

The overall ambience of VR – any model - is much improved. The palette of colours and fabrics employed is definitely '90s. VP's interior look was mired firmly in the '80s. The impression is an accurate one.

In every way that really matters VR is a cleverer, more modem car than VP; sometimes measurably superior. This was drastic, not plastic, surgery.

And the patient is much better, thank you.. 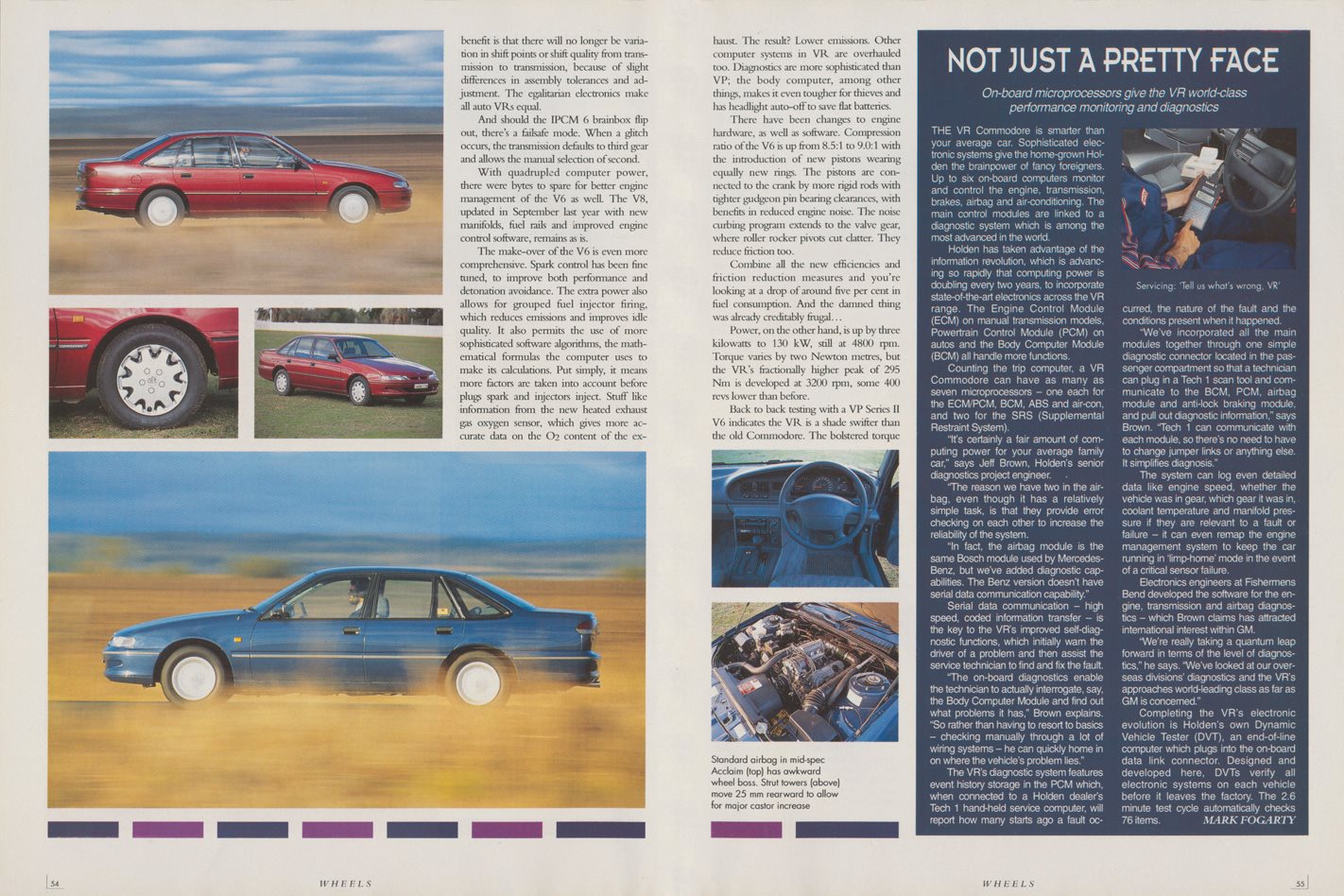