VT took Commodore to the top. Now Holden hopes the reinvigorated VX will keep it there

In the over-hyped world of car marketing, the word 'new' is a currency devalued by frequent use. It can be squandered on a car with nothing new but badges, or well spent on a clean sheet design.

Holden's VX Commodore, the mid-life facelift of 1997's crisp new VT, fits somewhere in between. But don't think VX is light-on for newness based on the nose and tail job. They just flag the subtle but significant changes you can't see.

The VX's biggest improvement is in passive safety, through minor but extremely effective changes based on extensive research into side impacts. Modifications to the B-pillar improve side impact protection across the board. If you have a side-on collision in a VX not fitted with side airbags, risk of injury is halved compared with a similarly equipped VT. The addition of antiskid brakes to standard equipment lists of Executive and S models means the entire Commodore range now has Bosch version 5.3 ABS. As well, traction control is now available in combination with manual transmission for the first time. It's standard in the manual SS and optional in other models. 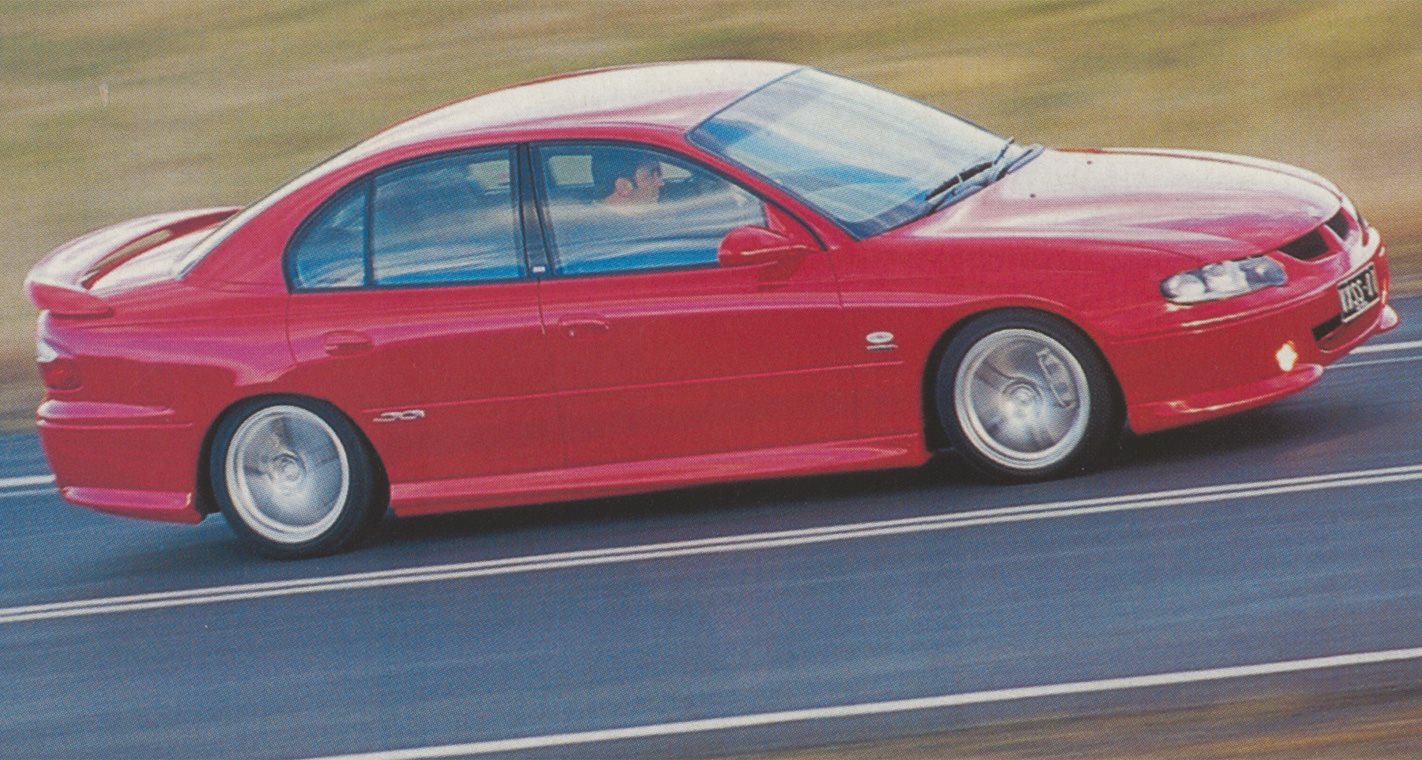 Though the satellite navigation option continues, Holden plans to improve this feature on VX next year with the fitment of a telematics communication system. Offered in conjunction with state motoring organisations, the system will initially be able to summon roadside assistance and perform vehicle tracking, immobilisation and unlocking.

Both V6 and V8 engines have been tweaked to improve output and fuel economy. The 3.8 has undergone subtle changes that increase power by 5kW to l52kW at 5200rpm, at the same time as marginally improving fuel consumption. A new drivetrain control computer with 33 percent more memory and a new inlet manifold are the key changes. The boost in computer power allows individual cylinder spark control, while the diecast inlet manifold has a centrally located crankcase ventilation outlet. Both measures contribute to the improvements. The VX's new driveshaft, with rubber couplings at each end, also helps boost fuel economy. While the main aim of a two-piece shaft is to isolate vibration, a side effect is that it allows the torque converter's fuel saving lock-up clutch to be engaged earlier than before.

The V6 auto transmission has been recalibrated for better response to throttle changes, a more sensitive downshift and earlier torque converter clutch unlock in fourth gear. 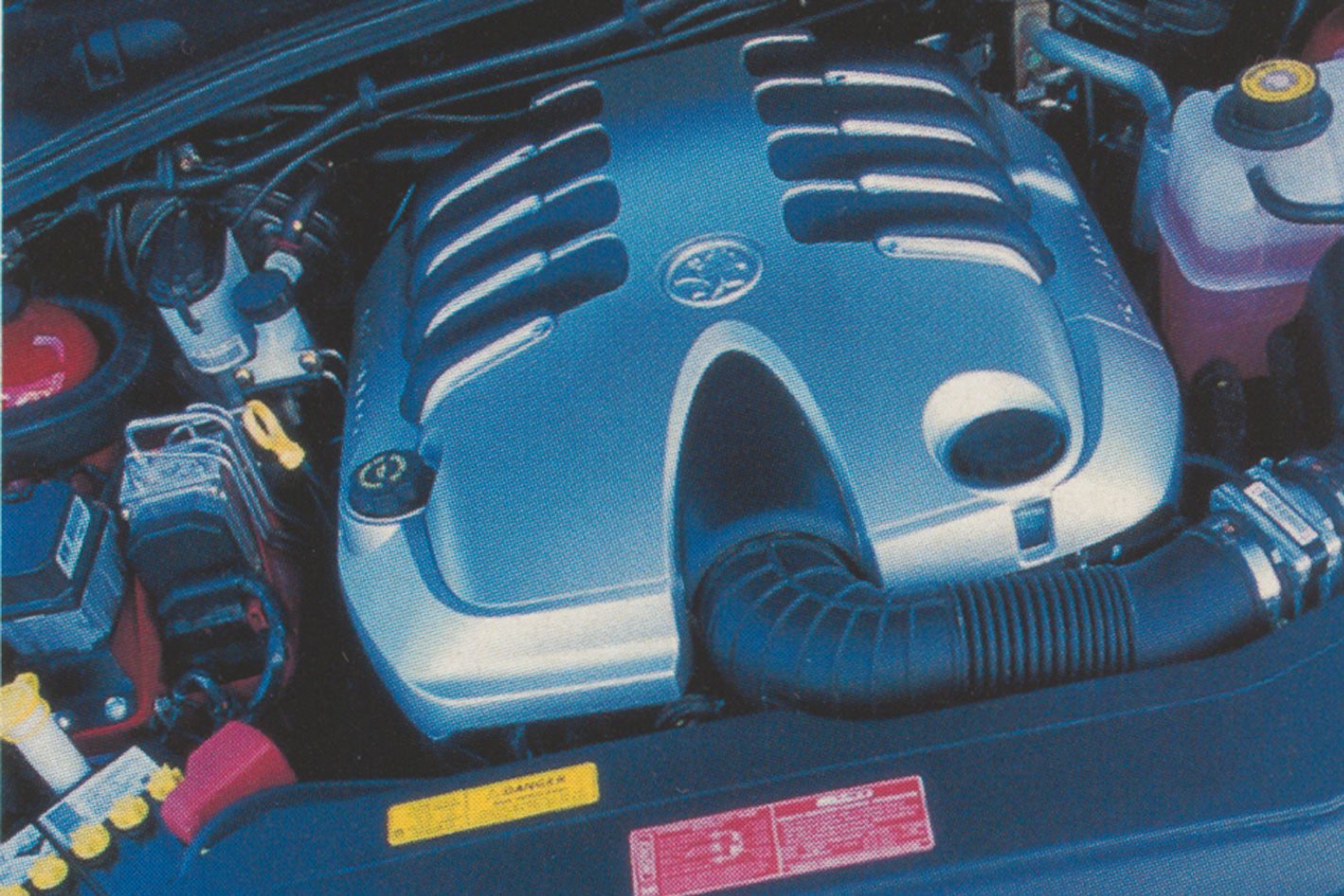 The 5.7 Gen III has a higher flow inlet manifold and injectors have been improved to suit. With the addition of engine management software changes, power is up from 220kW to 225kW.

Holden's engineers say they have altered the front suspension for a more linear response to steering input. The revisions are simple. The lower control arm pivot points were raised by 4mm and ball joints replaced rubber bushings in the lower ends of the links, between the anti-roll bar and struts.

While changes vary according to model, Holden says kerb weight is up on average only 10kg. From VT Series II to VX, there's 4kg more on Executive level and 19kg extra for Calais V6. 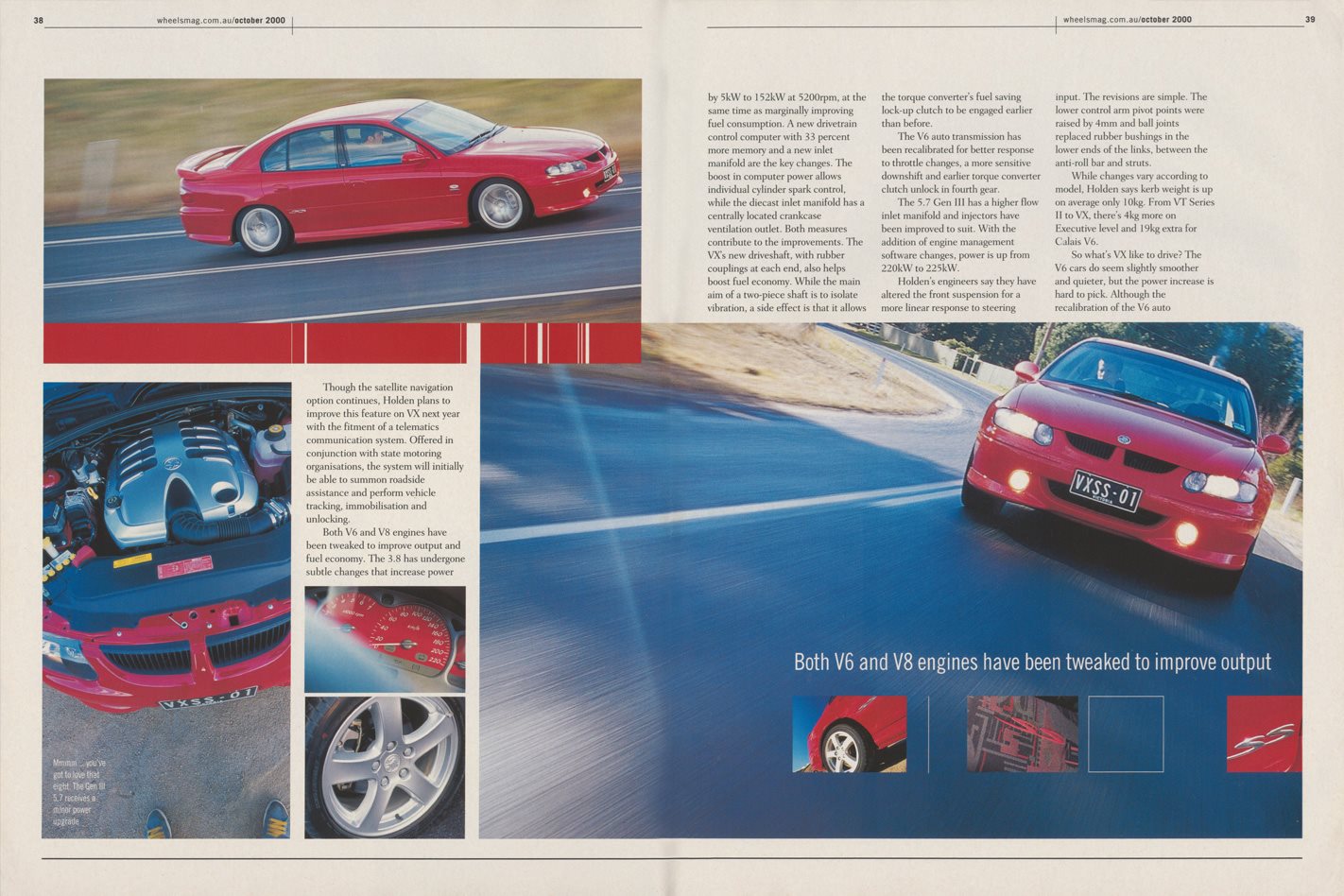 So what's VX like to drive? The V6 cars do seem slightly smoother and quieter, but the power increase is hard to pick. Although the recalibration of the V6 auto transmission does slightly improve its behaviour, the V8 auto still dithers over part-throttle shifts as much as ever. The suspension and steering improvements we can't comment on, because Holden had not incorporated them in the pilot build cars we drove.

The rear end, however, remains a concern. Its tendency to bow under pressure, with a roll-steer response to heavy cornering loads, isn't pleasant. The rear semi-trailing arm suspension, around since the 1970s, is a proven design. This means, to Holden, that it's proven it works.

There's no reason to alter it and there's also little official sympathy for customers with complaints about excessive rear tyre wear. "There is no problem," says Holden engineer Colin Sichlau, of Commodore's IRS. Tyre wear is related to under-inflation of tyres, incorrect tyre use and overloading, he maintains. 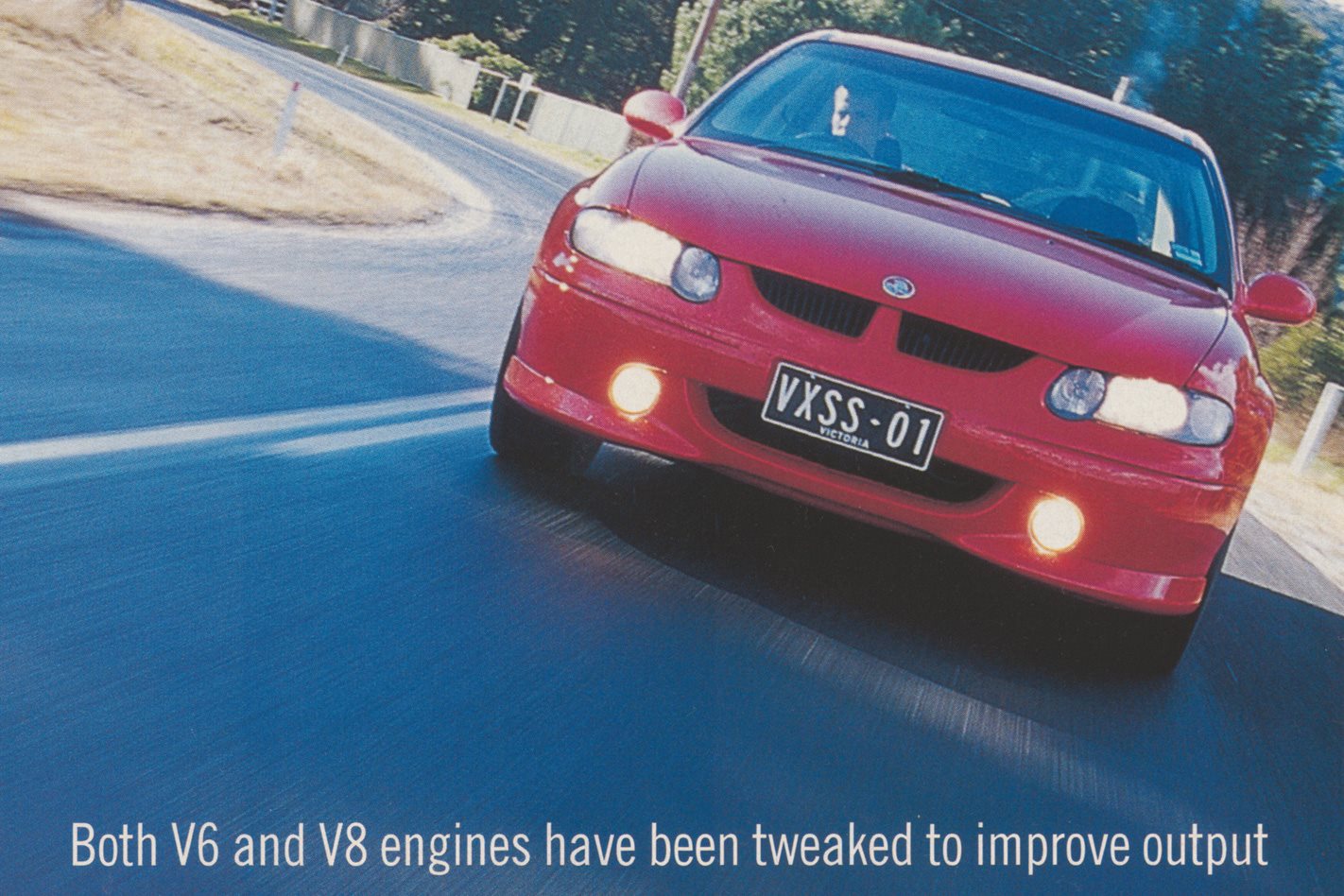 Commodore's cosmetic changes answer two requirements; freshening a shape that's been on the road for three years, and serving as an opportunity to better distinguish the upper spec models - Berlina and Calais -from the rest of the range. The Executive, Acclaim, S and SS make the most obvious departure from VT at the front with their teardrop shape headlights. According to Holden, VX Commodore headlights have a better reflector design than before, resulting in a superior low beam spread. And initial impressions at the launch are that the effort was worth it. The new body kit for the S and SS is hot - and smells strongly of HSV.

Holden's taken a different tack with Berlina and Calais, separating these high line models from the pleb models with Magnaesque headlight and grille treatment. All VXs have new taillights, but Berlina and Calais have a full width lense treatment while the rest have body colour boots.

So, a smoother nose, tail and driveline. The VX Commodore may seem to be just a VT with a facelift, but is much more than that. In each VX, there is the flow-on of Holden's commitment to significant safety improvement in its cars. Look deeper than the vanity of new nose and tail treatments, new wheel design, new interior and exterior colours, and you have a car of substance. 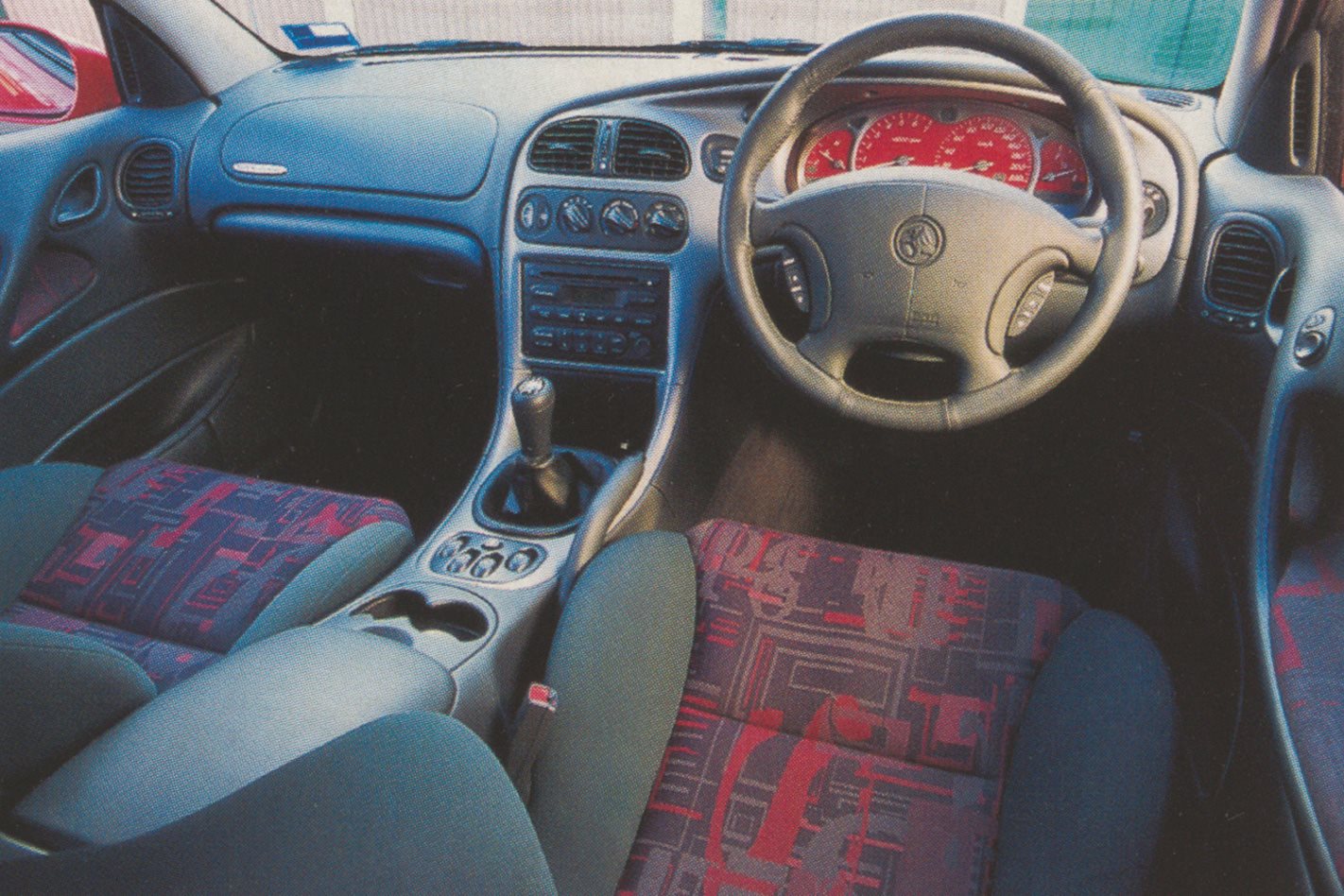 Yet, in other respects, VX is not so new. There's a little bit of new tech and Noah's Ark in every VX. The four-speed auto remains largely unchanged, with its thump and bump style of shift. And is this enough to keep Holden's number-one spot?

Holden's bought breathing space until the all-new VY in 2002. But it better be working on driveline and suspension to keep Commodore Australia's favourite car.

In Australia, side impacts account for 25 percent of car crash casualties and 28 percent of fatalities. These are usually severe crashes, with death or injury a highly likely outcome. The VX Commodore's better side-on crash protection is a result of the Improved Side Impact Protection Research Project, a collaboration between Holden and the Monash University Accident Research Centre. 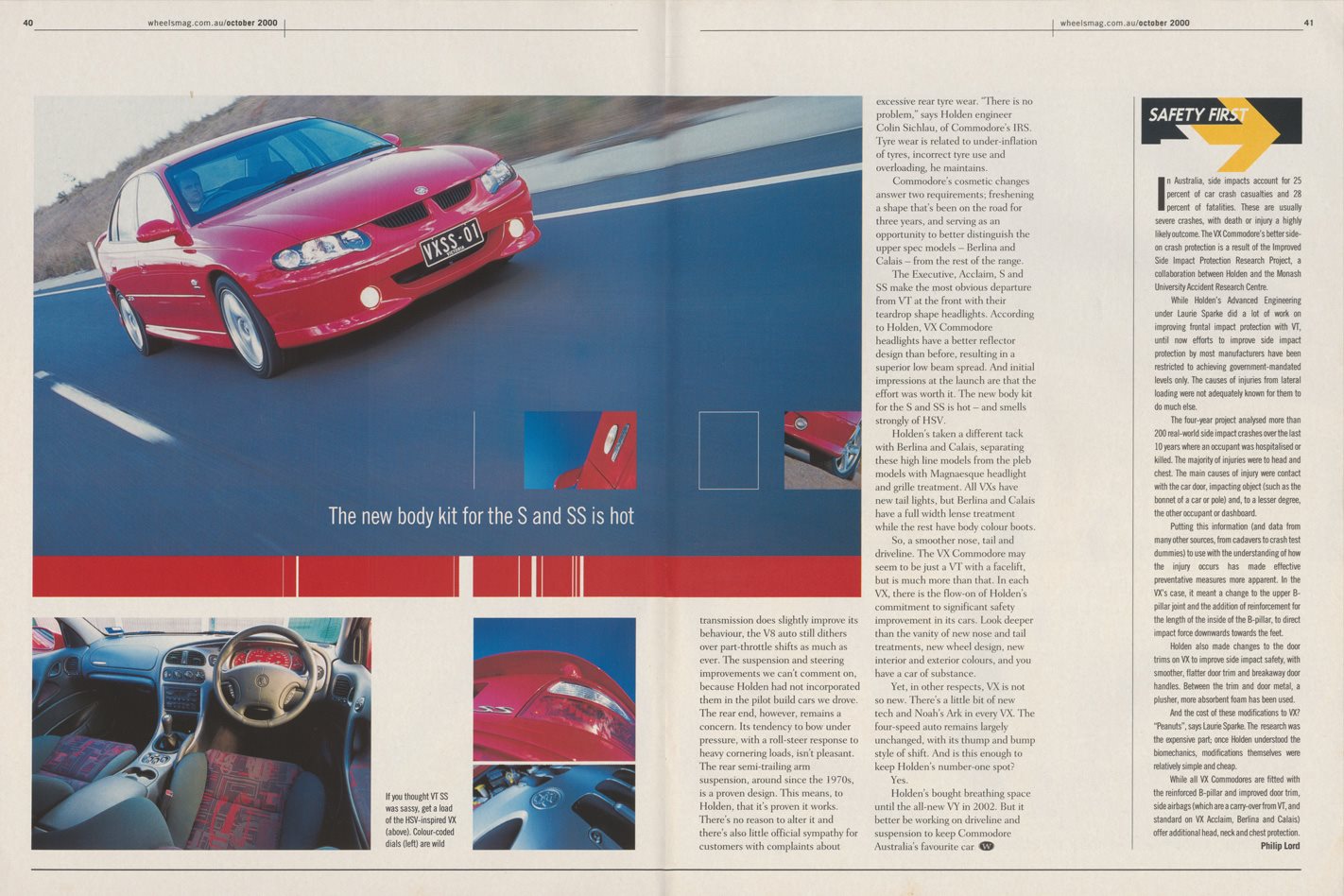 While Holden's Advanced Engineering under Laurie Sparke did a lot of work on improving frontal impact protection with VT, until now efforts to improve side impact protection by most manufacturers have been restricted to achieving government-mandated levels only. The causes of injuries from lateral loading were not adequately known for them to do much else.

The four-year project analysed more than 200 real-world side impact crashes over the last 10 years where an occupant was hospitalised or killed. The majority of injuries were to head and chest. The main causes of injury were contact with the car door, impacting object (such as the bonnet of a car or pole) and, to a lesser degree, the other occupant or dashboard. 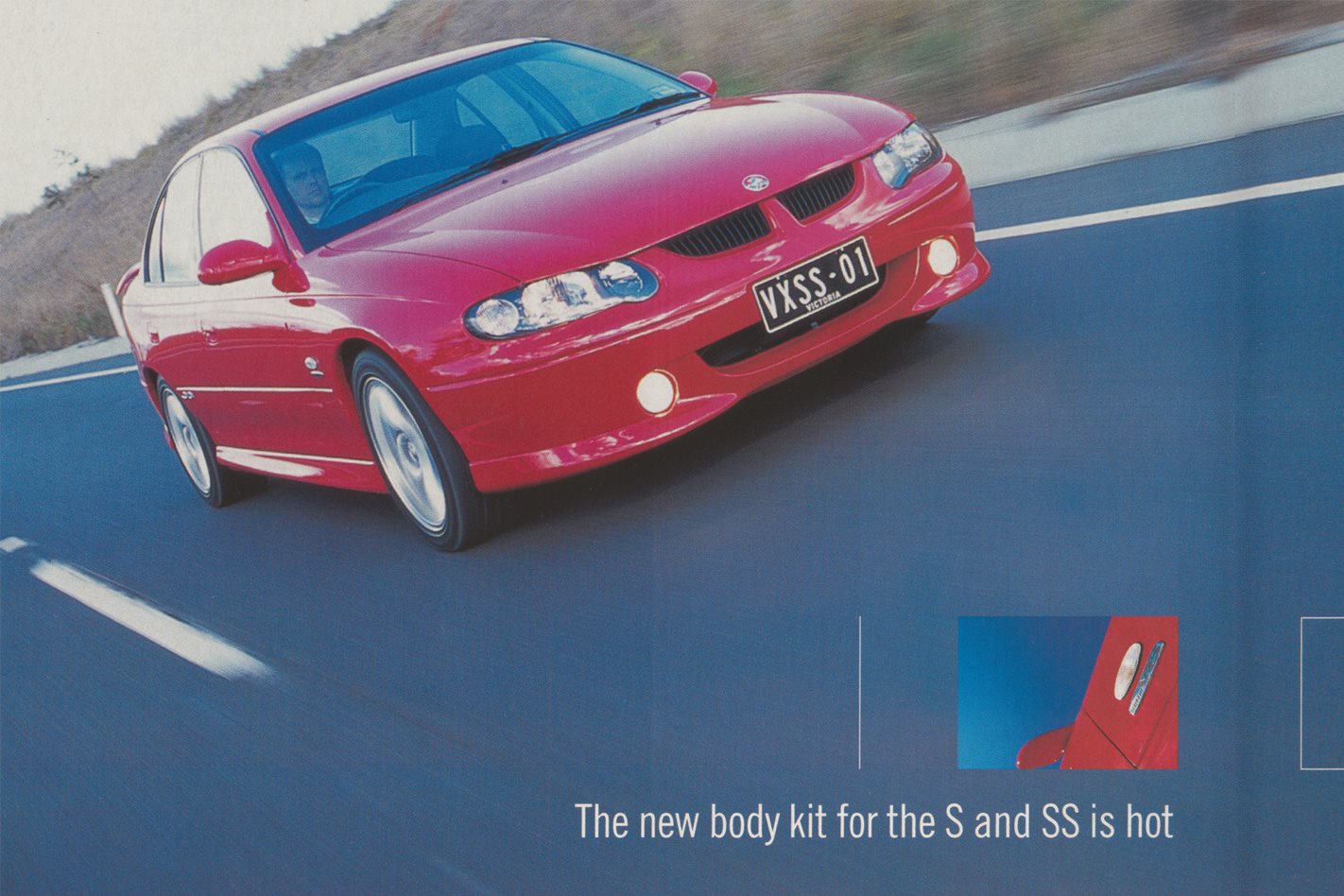 Putting this information (and data from many other sources, from cadavers to crash test dummies) to use with the understanding of how the injury occurs has made effective preventative measures more apparent. In the VX's case, it meant a change to the upper B-pillar joint and the addition of reinforcement for the length of the inside of the B-pi liar, to direct impact force downwards towards the feet.

Holden also made changes to the door trims on VX to improve side impact safety, with smoother, flatter door trim and breakaway door handles. Between the trim and door metal, a plusher, more absorbent foam has been used. 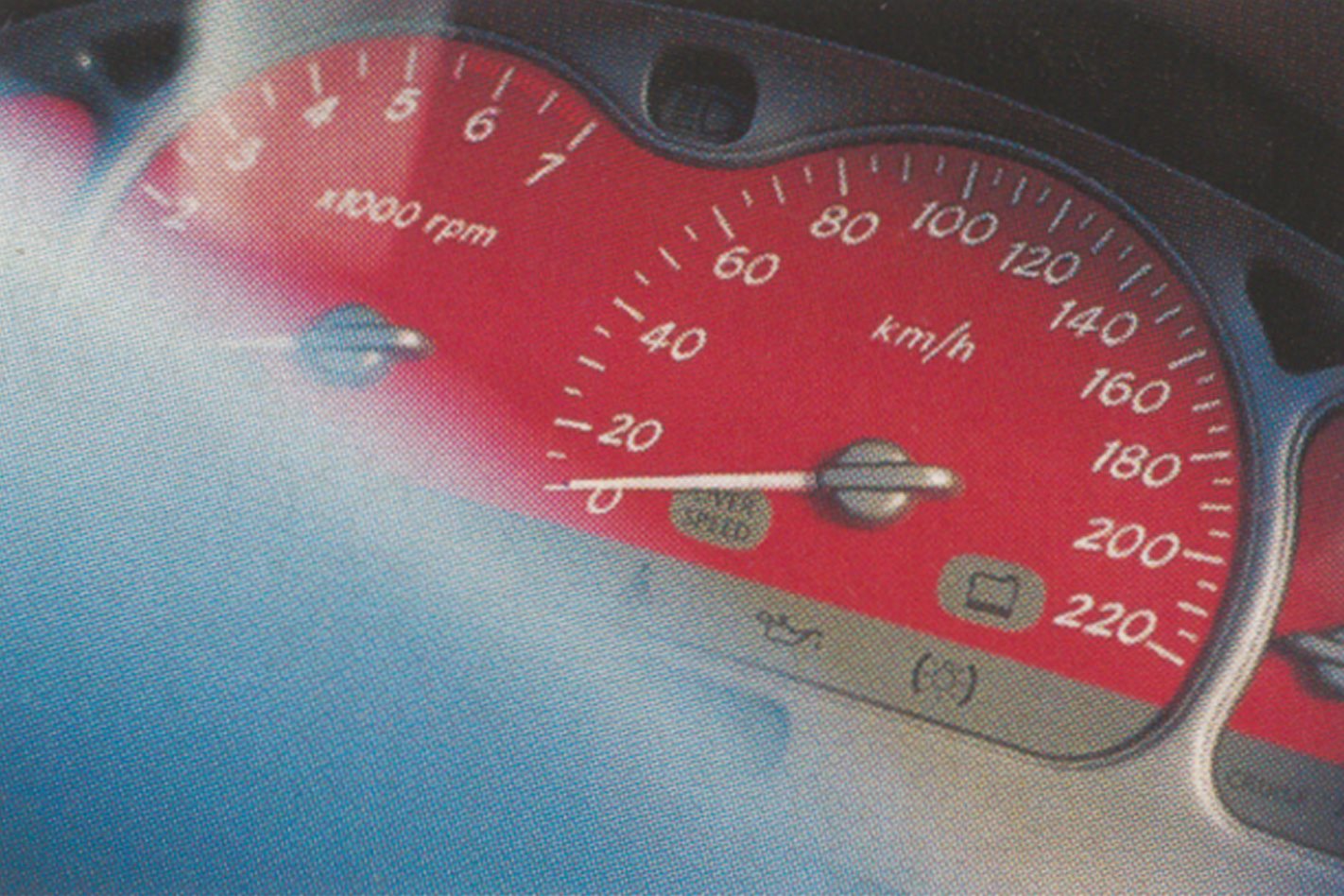 And the cost of these modifications to VX? "Peanuts", says Laurie Sparke. The research was the expensive part; once Holden understood the biomechanics, modifications themselves were relatively simple and cheap.

While all VX Commodores are fitted with the reinforced B-pi liar and improved door trim, side airbags (which are a carry-over from VT, and standard on VX Acclaim, Berlina and Calais) offer additional head, neck and chest protection.