The hot rod and tattoo art of Ev Daines

EVAN Daines is a young artist and tattooist that has the work-life balance nailed down better than most.

The 32-year-old’s secret is pretty simple – he surrounds himself with art and the rest takes care of itself. His studio space is set up alongside his newly acquired FB Holden ute, in the garage of the townhouse he shares with girlfriend Heather and a cheeky black Chihuahua named Lemmy. Ev’s workplace is literally just a few streets away at Wicked Ink Tattoo in Penrith, where the walls of his room are covered with his art – which ranges from your basic Roth frothing to kooky kustom kraziness to hyper-real depictions of classic cars and hot rods.

He grew up around motors thanks to his father, an old short-track speedway bike racer and part-time tinkerer, as well as absorbing all the usual pop culture influences like cartoons, comics, Hot Wheels, rock ’n’ roll, BMX and skateboarding. As he got older he gravitated towards old-school cars, hot rod art and tattooing, and through countless hours working at each he’s got his game fully on point. 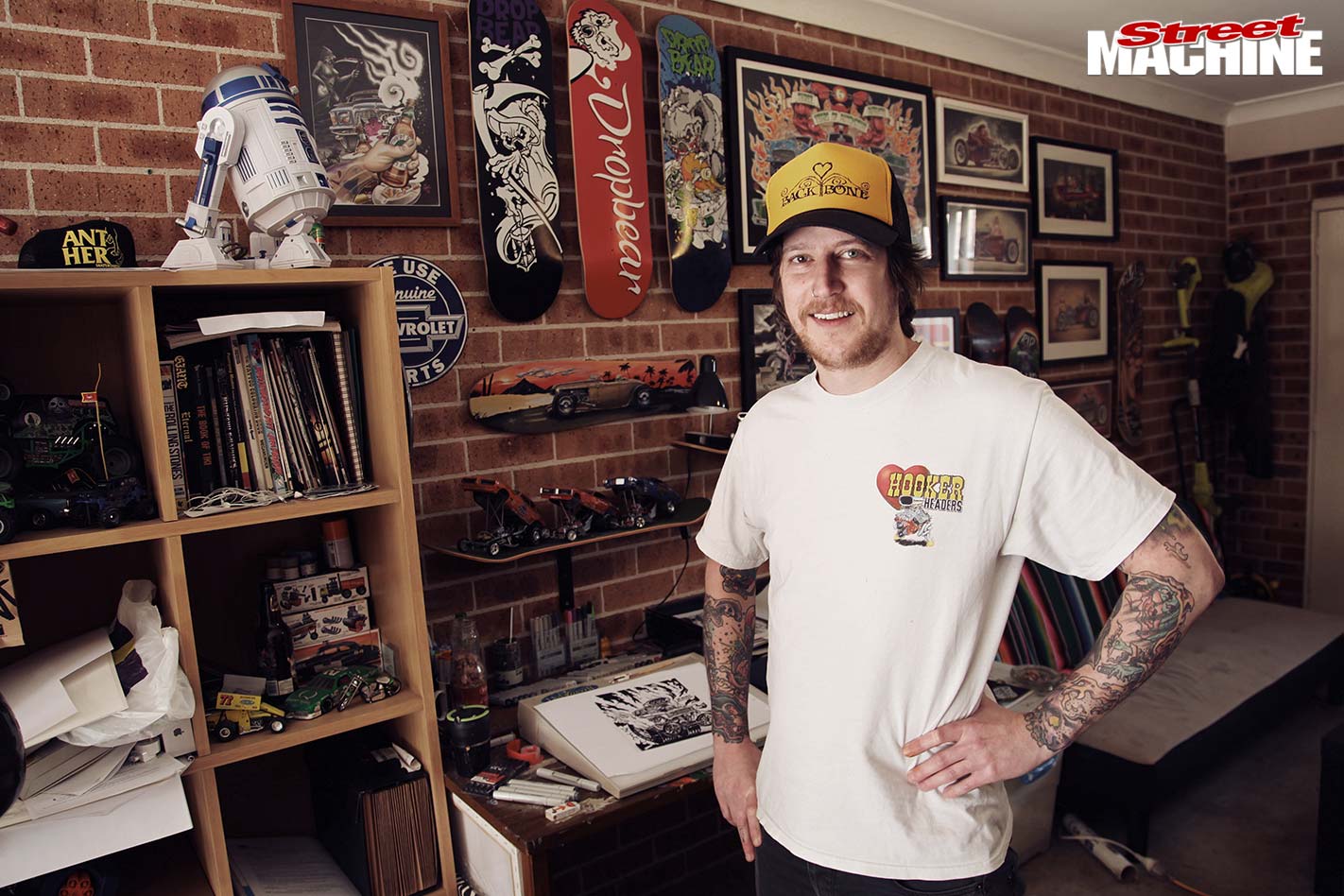 How’d you get inspired to do car art?

Mainly getting into Keith Weesner’s stuff. I didn’t know many hot rod artists growing up but I was massively influenced by Ed Roth art, comics, Hot Wheels and Simpsons and Ren & Stimpy cartoons. My brother got me a Weesner print for my birthday maybe 10 years ago. Cherry Pie was the first print I got and I just fell in love with it. I’ve been trying to draw like that ever since. And I also love Robert Williams, who also would have influenced Weesner; just crazy detail in his art. 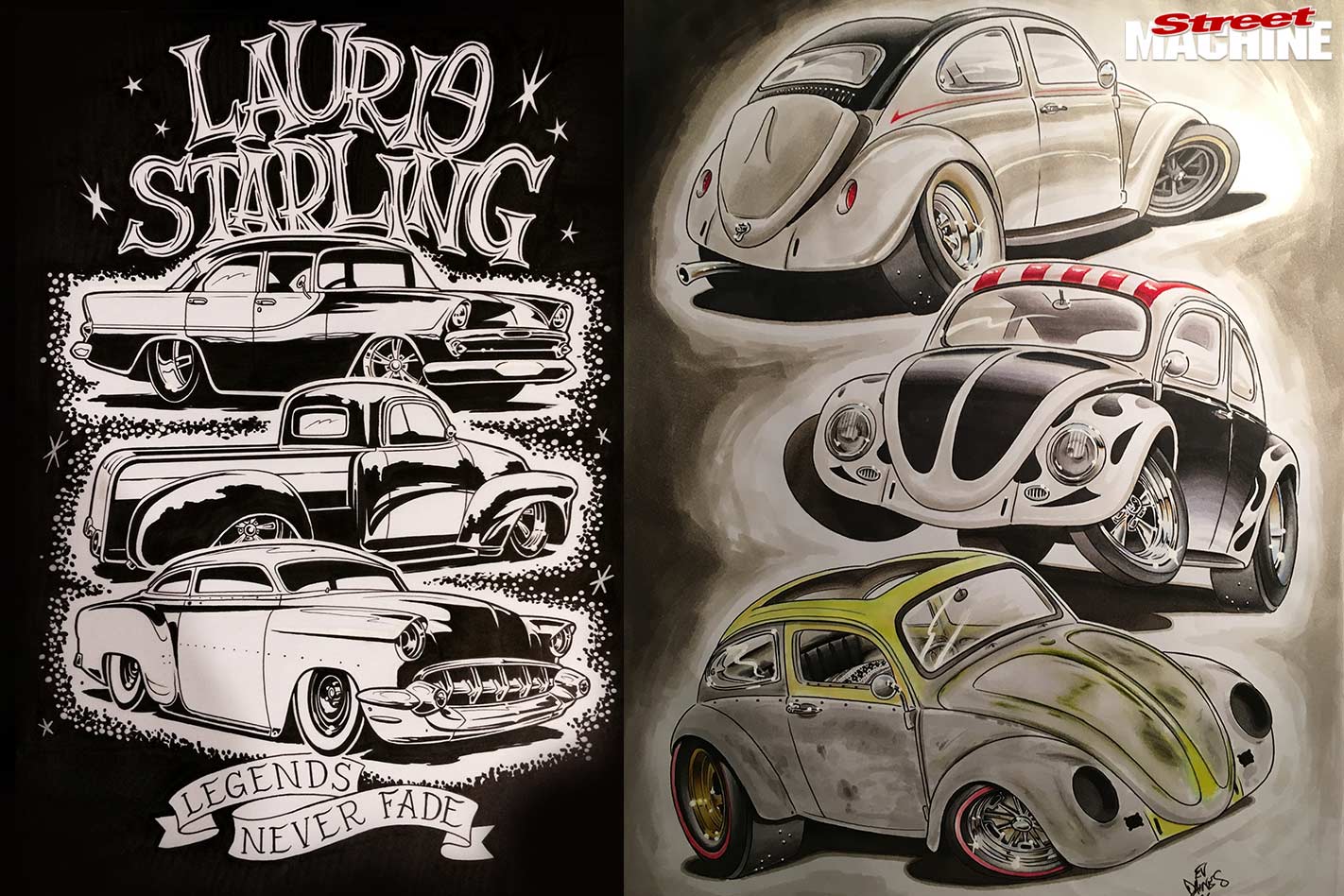 Yeah, he’s definitely a master. I have a lot of fun trying to do chrome. It took me forever to learn but I’m all right at it now.

How long have you been drawing?

As a little kid Mum would give me crayons and sit me on big sheets of butcher paper and I’d draw for hours. It became my hobby and it stuck with me. I’d do that when I had downtime and I just never stopped. 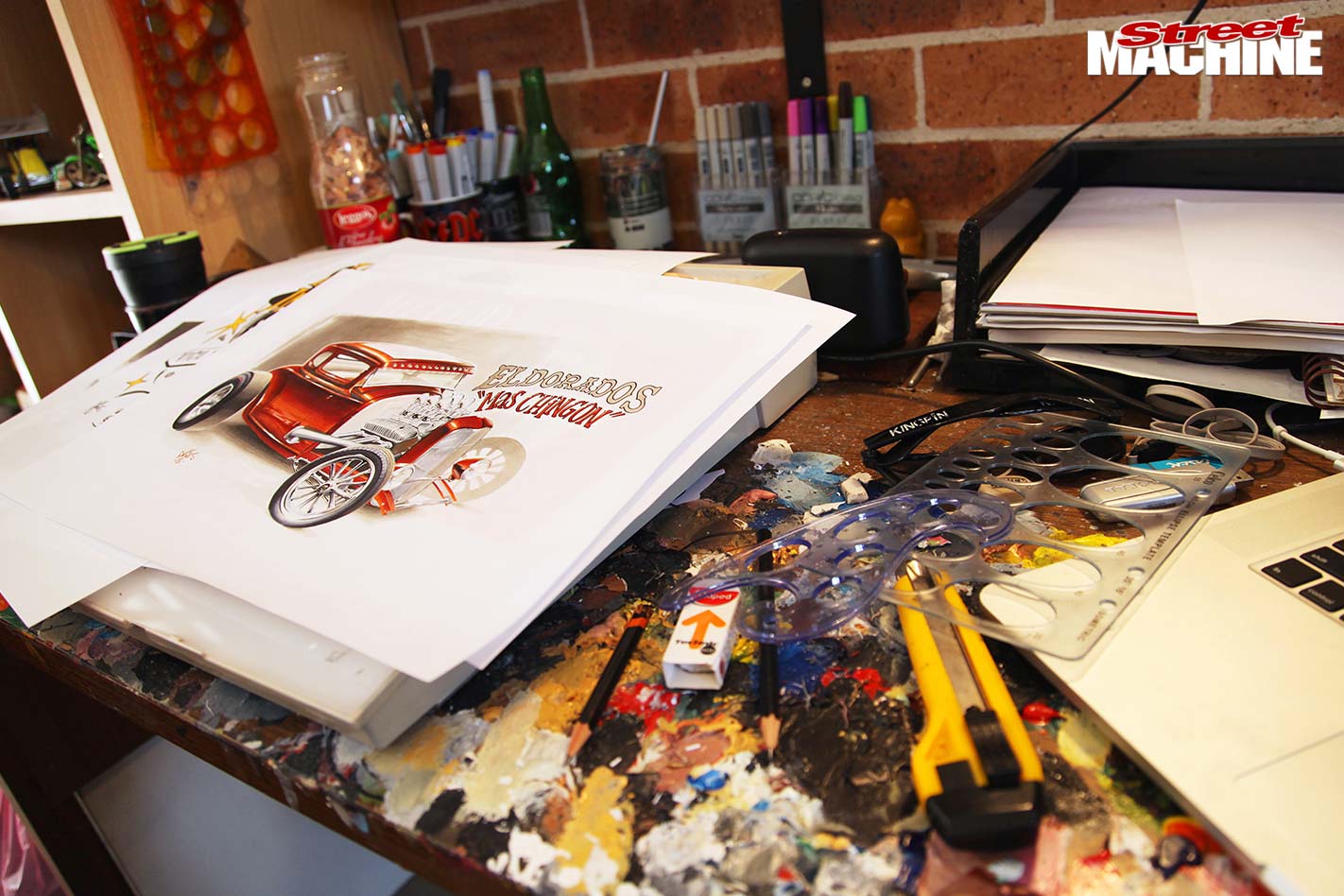 Where does the automobile influence come from?

My Dad was always into cars and bikes. He’d take us to the drags or the speedway, and he was always in the garage with cars – he had Holdens and Fiats. And my oldest brother got into cars, so I was always around it. I was always trying to draw Hot Wheels toys. I’d get Dad to draw it and I’d watch him and then I’d try to draw it. He wasn’t really into art but he was a draughtsman. So that started me off.

You have a hint of a draughtsman’s approach, especially with getting your proportions right.

Yeah, I usually have about three or four traces of the original until it gets to the final outline that I colour in. I try to make them realistic but only to a point. When you draw too realistically it’s a little bit tacky, so I dumb it down and try to give my drawings some character and style. And I also love to do twisted, weird stuff. 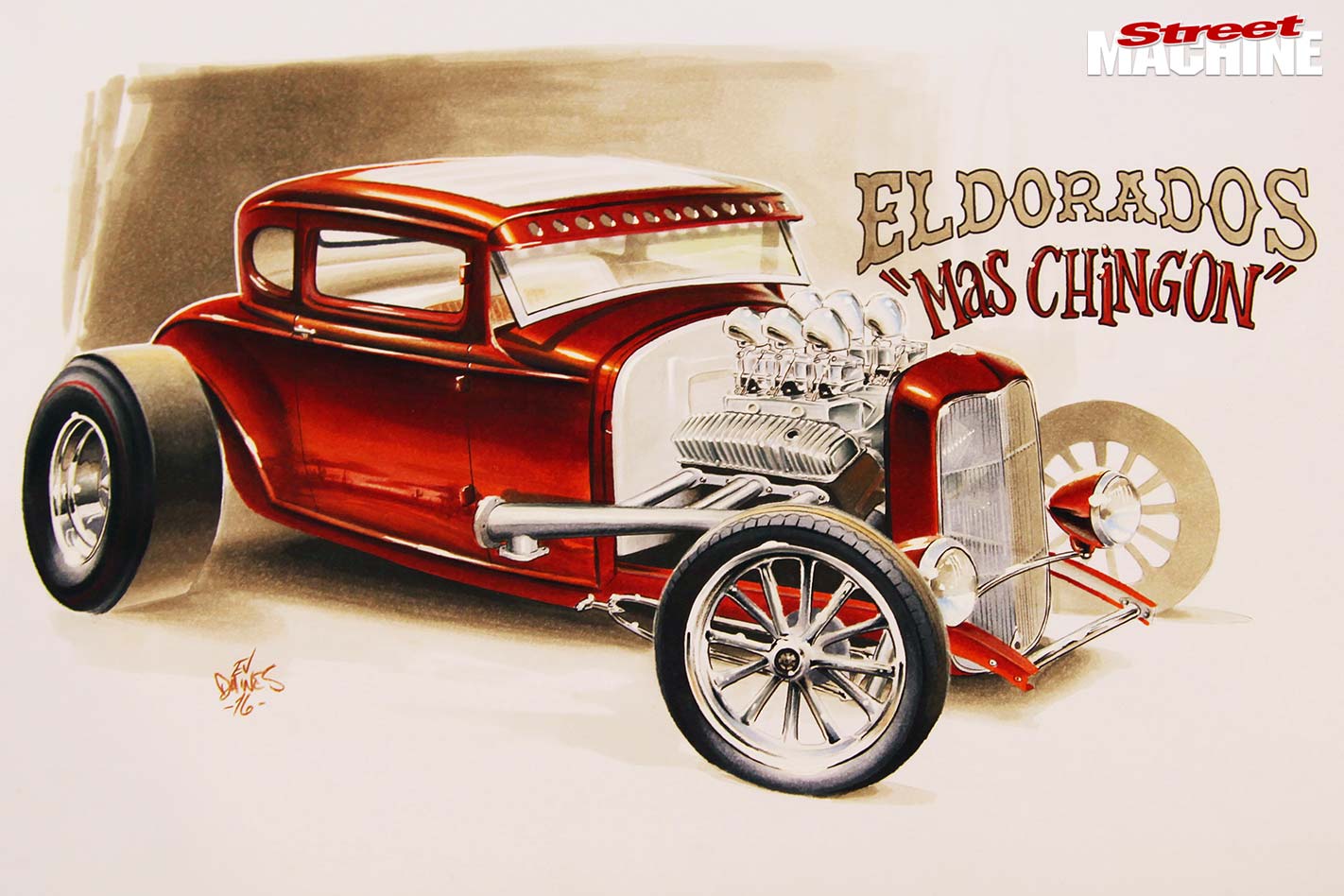 Are there any local peers that have inspired you?

I always annoy Ryan Ford. I found Ryan’s stuff when I started on Instagram and really liked his style. I painted his roadster on an offcut bit of wood as a present for him for helping push me to get my art to where it is now. But over to the side I put: ‘Ryan Ford ain’t got shit.’ Just a bit of friendly banter to let him know I’m coming for him. [Laughs]

Any other local artists do you relate to?

There’s Karl Kaufmann, he was a tattooist out this way who does creepy drawings and tattoos and was a big influence. And Brad Lon, who does similar stuff, really cool, out-there, twisted art. Ryan, Karl and Brad are probably my biggest influences. And I always talk to Lee Goode and we’ll often show one another what we are working on. I get stoked when I see those guys commenting on my drawings. Getting their thumbs up makes me feel like I’m going the right way. 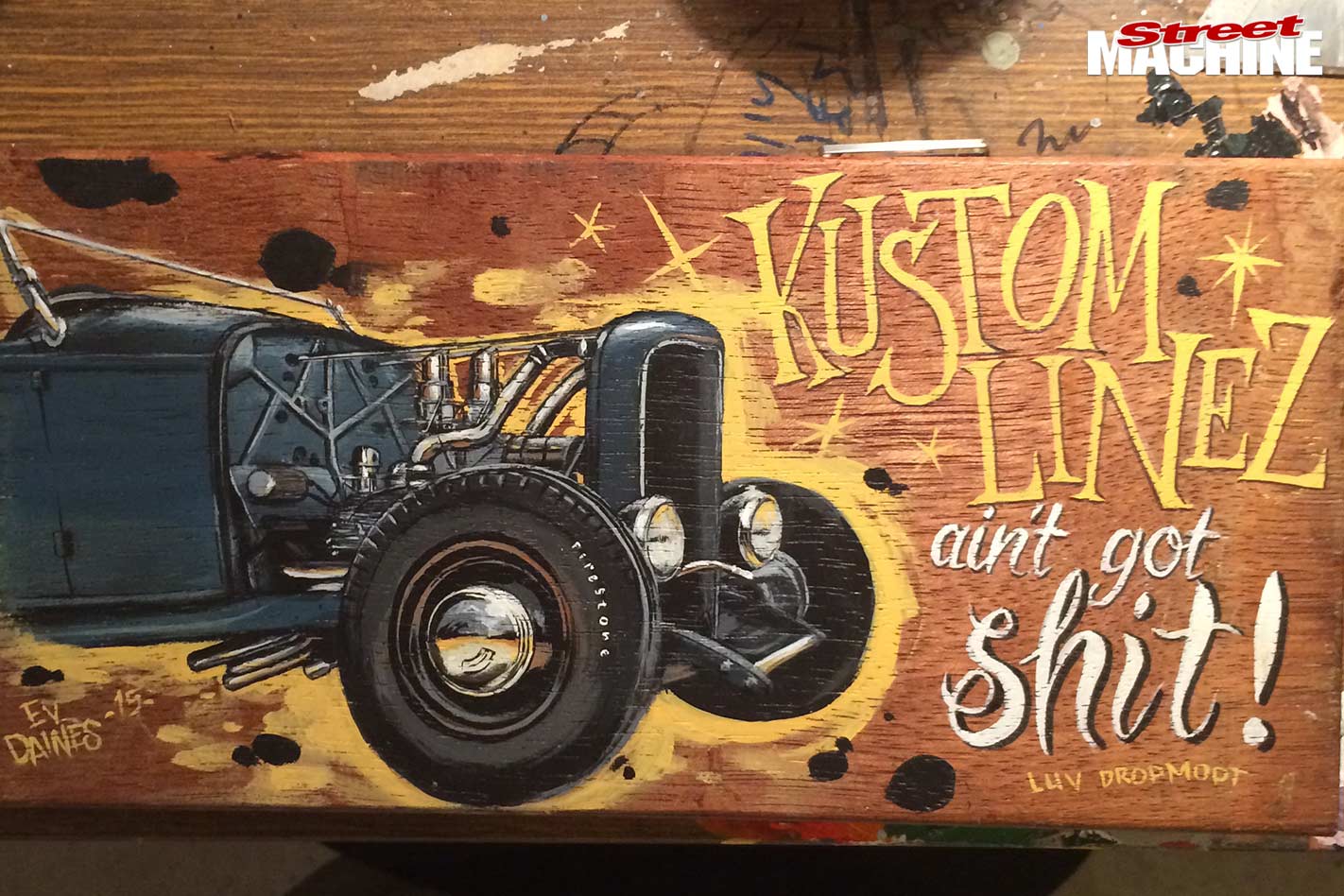 Where do you start with one of these artworks?

I’ll just get on the old Google machine and find a car that’s got the right kind of angle. There’s a lot of research in finding different bits and getting clear photos so I can get all the details. Then there’s a lot of drawing and retracing to get the lines right, changing wheels, engines, things like that. After I get my last trace sorted it’s all a matter of layering and building up the colour. I normally work on the tyres and wheels first. I block in the colours as best I can with Copic markers and then go over it with Prismacolor pencils to smooth it out. 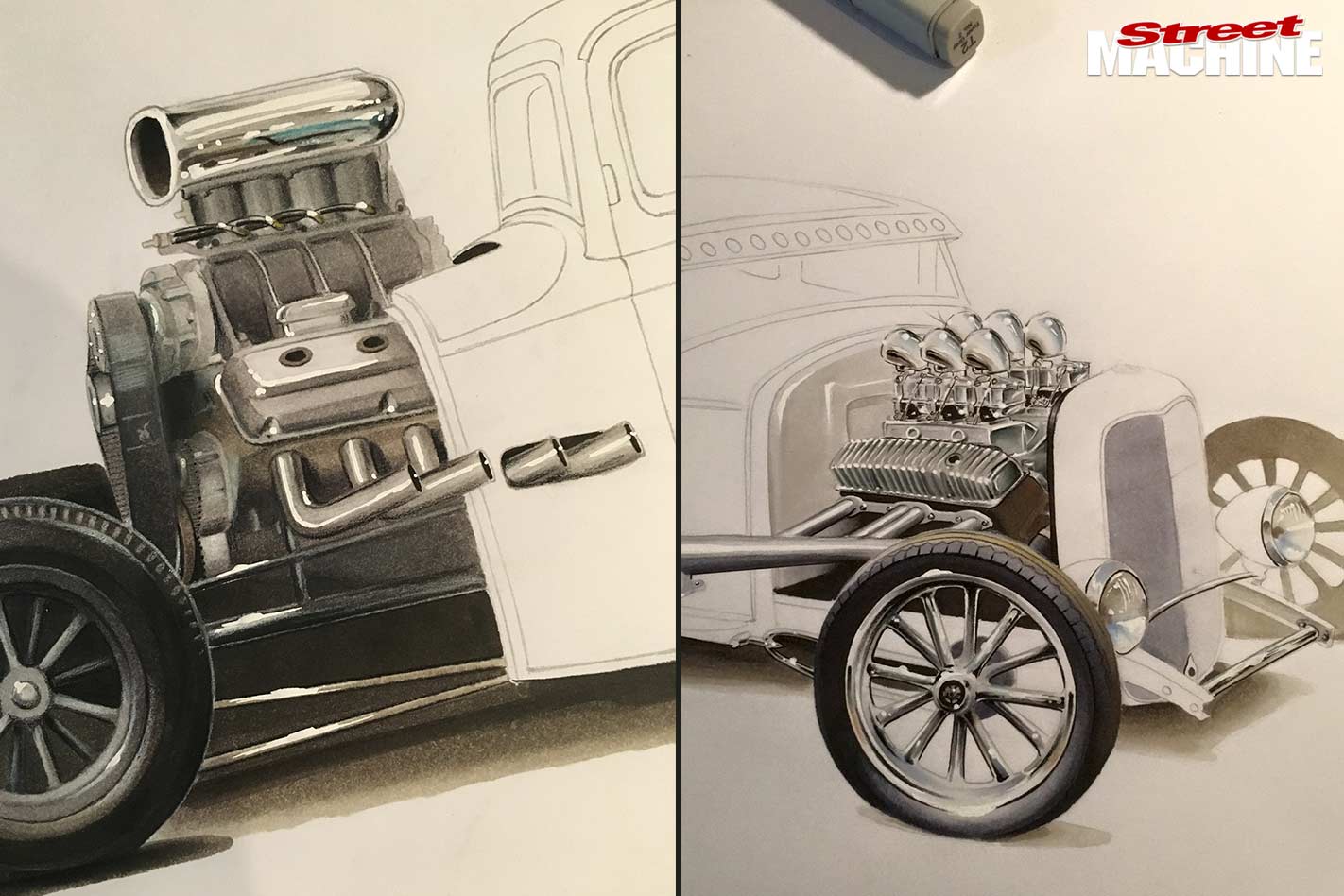 Are you pedantic about colour?

Sometimes I have customers and they’ll send me colour references for their car and I have to try and match it. I dread doing the paintjob, getting the reflections to look right, because if you stuff it up you have to trace it all over again. Especially if you’ve already got all the chrome looking right, which I usually do, and then you stuff up a paintjob, it’s pretty stressful. But I’ve been lucky so far. 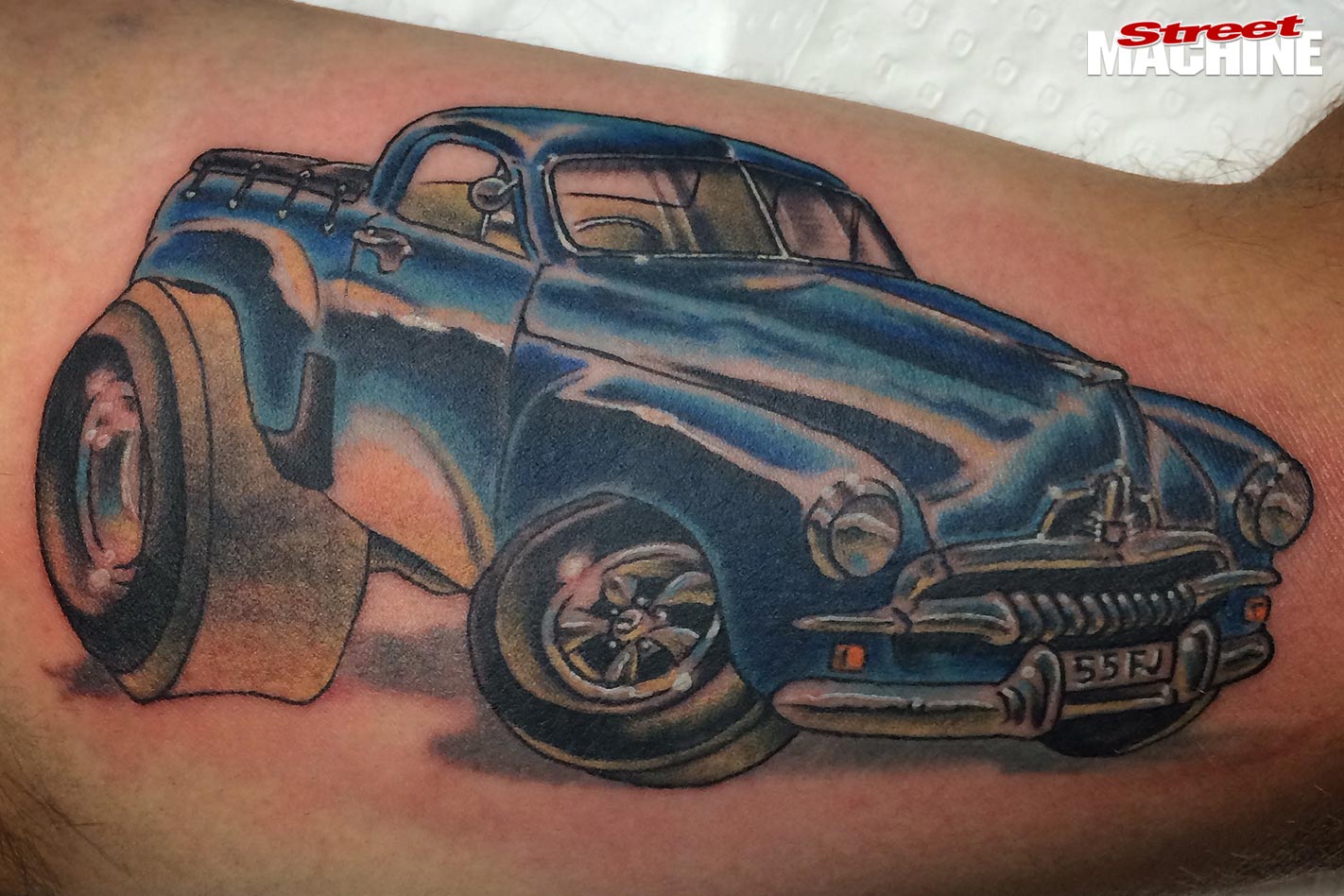 Do you do much commission work?

I’m getting hit up a lot now. That all started with my mate Adam Dal Santo’s roadster, which is still in the build. I just met Adam off Instagram, he’s from down Canberra way. He wanted to see what the car was going to look like with all the parts on it. He wanted it chopped and the windscreen laid back, so it’s not really one you can pick off the shelf or even Google easily. We went through pictures of different cars or parts and put it all together and I did it up on paper for him to see that it was going to work in the style he wanted.

How do you define your style?

With cars and stuff it seems to be going, “How good and how realistic can I get it?” But I actually enjoy doing that crazy Ed Roth style a little better. It’s a more fun and feels more natural than trying to draw a car from photos. When you’re just drawing off the top of your head – you know how cars work, they don’t have to look real, you can make them messed-up and twisted – that’s a lot more fun. 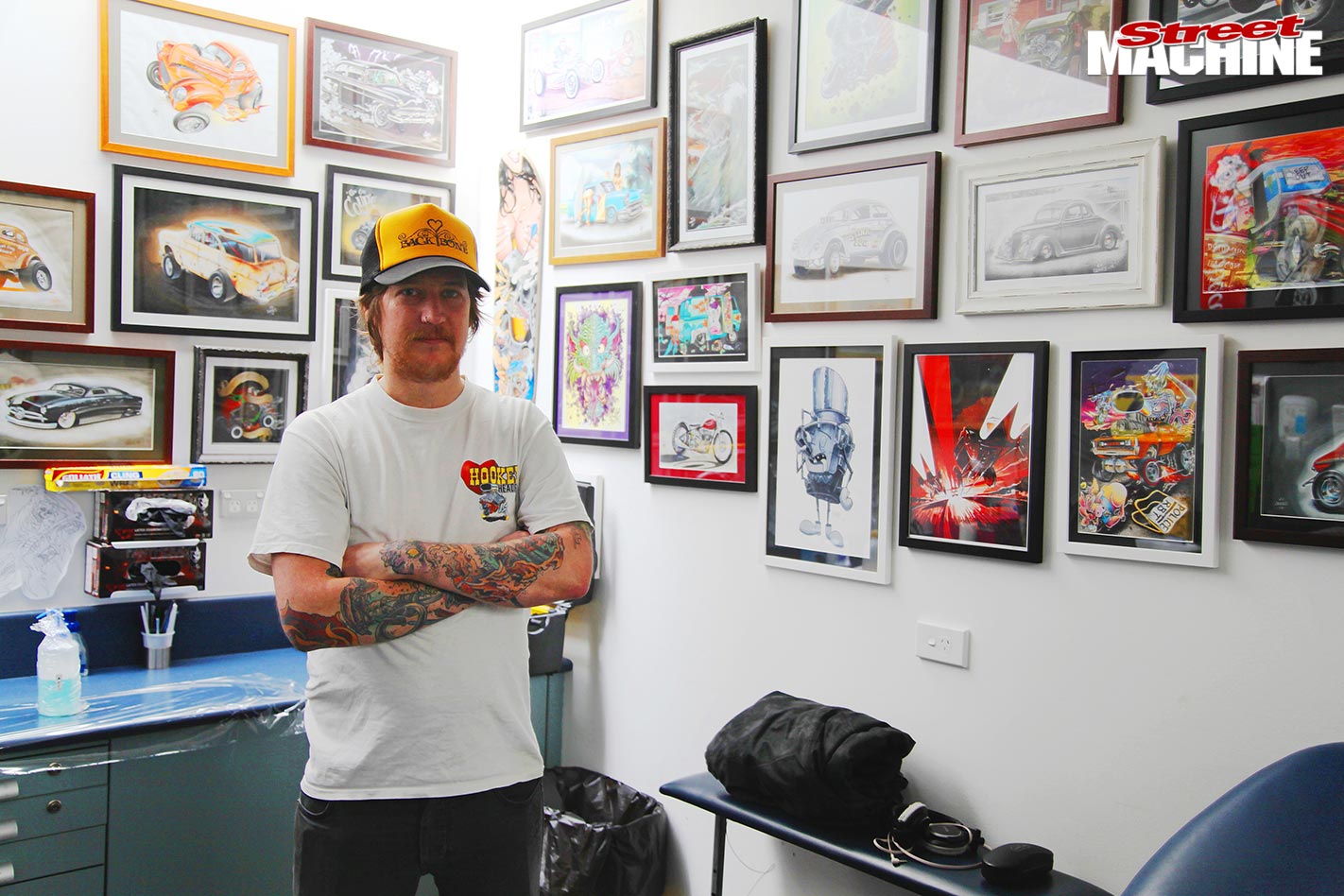 I went to TAFE for a few weeks and did this course call Design Fundamentals but it wasn’t for me. There was a lot of studying about stuff I wasn’t interested in. I talked to some guys who had done that course and later got into tattooing but I just thought I’d skip that and try to get into tattooing anyway.

Was tattooing an easy thing for an artist like yourself to get into?

That all started from friends getting me to draw their tattoos. One of the artists named Johnno Dennis tattooed a couple of my designs and we became good mates and he later took me on as his apprentice. And once I started tattooing I found that my artwork became a lot better. It definitely makes you be more precise and it made my drawings neater overall. 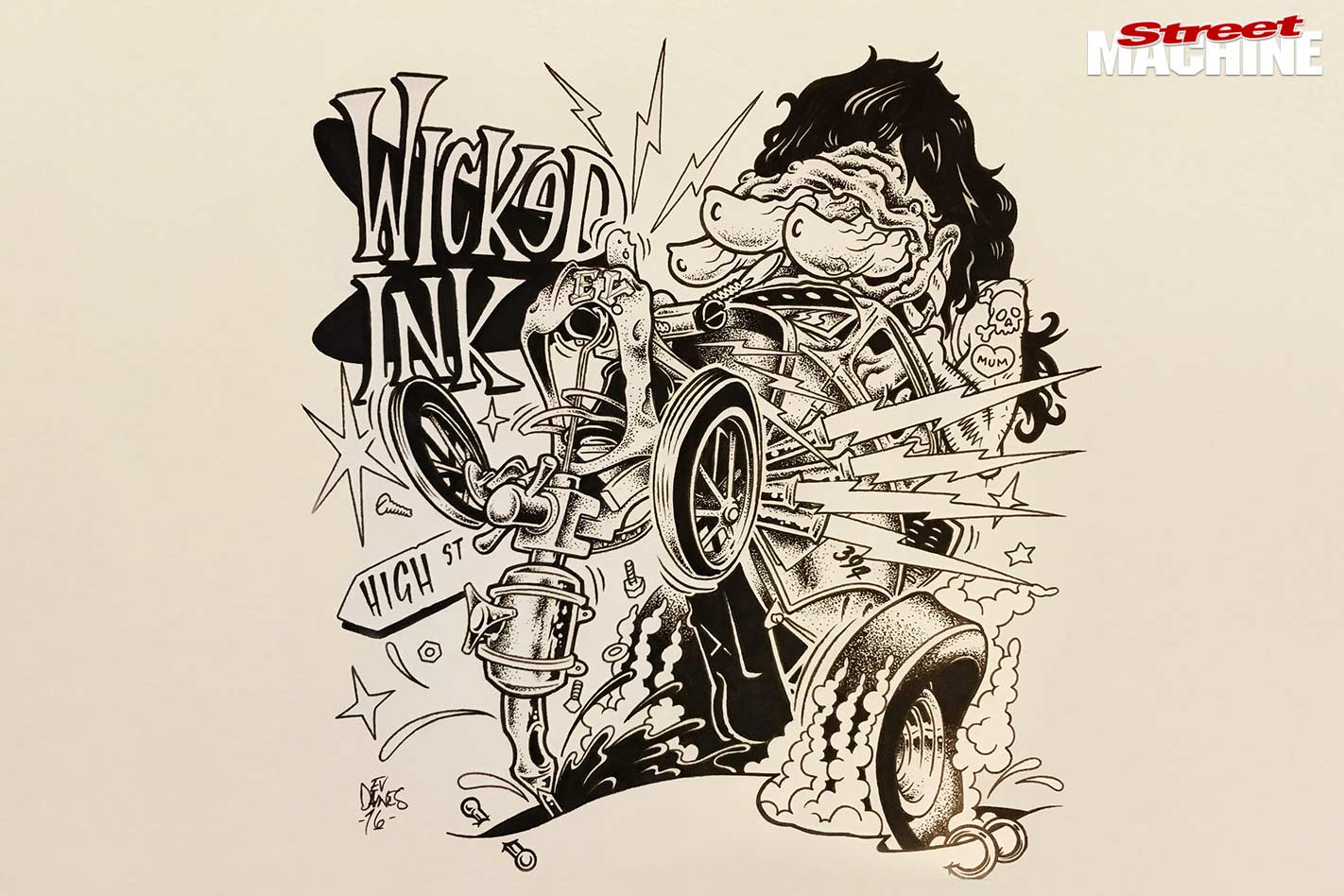 Sounds like you got this art caper in the bag.

I’m pretty happy with where it’s going. Now I look back on stuff I did years ago that I thought was really good and I think it’s shit – so I must be getting better!

Evan was photographed at Wicked Ink

SOME OF EVAN'S WORK: 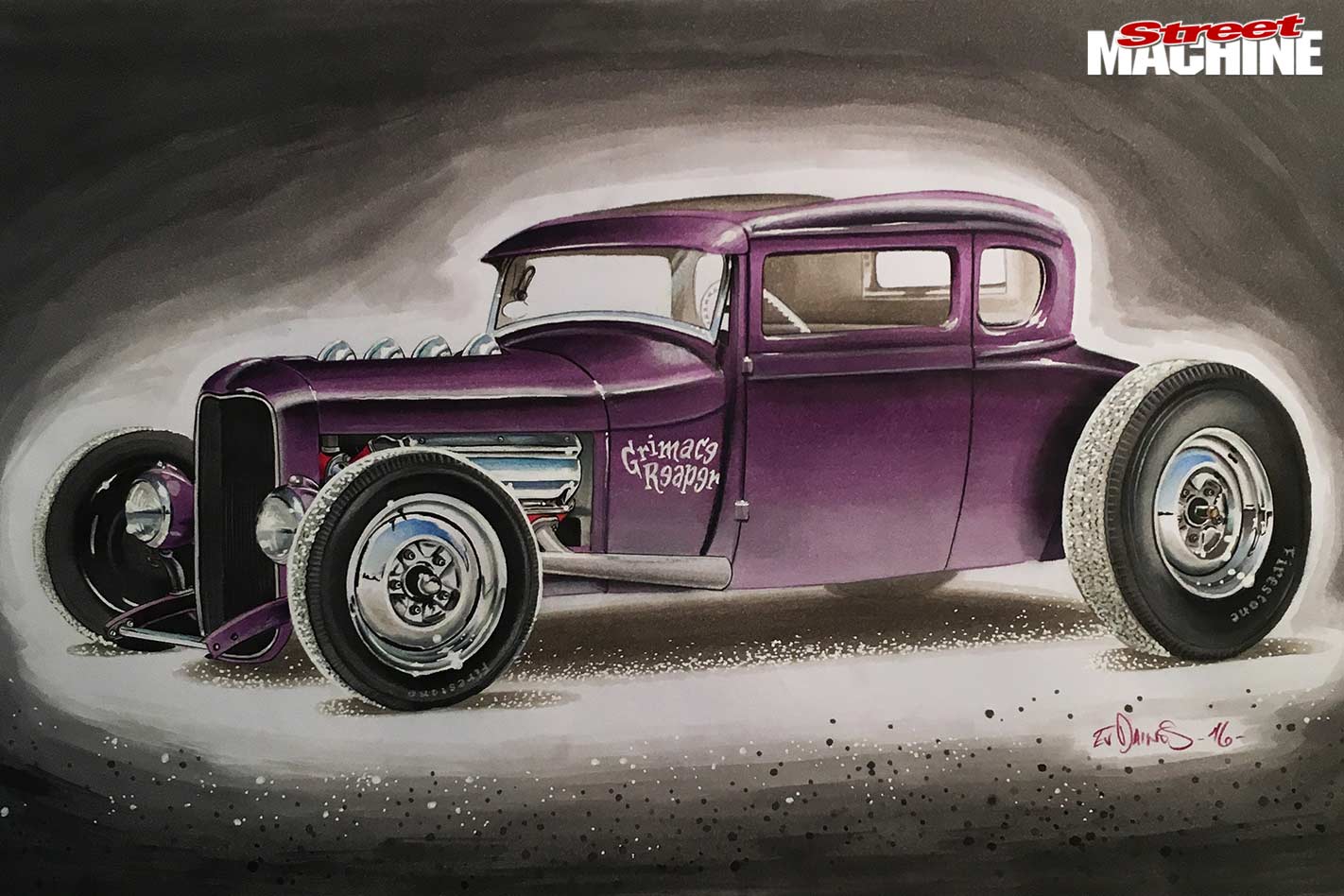 1. A bit of pisstake bringing together the McDonalds character Grimace ad the Grim Reaper, this was Ev's first drawing of a purple car and he went all-out. "I found a picture of a car that had the right kind of look but I just had to change a few things - I channelled it and changed the colour, made it more how I'd like it." 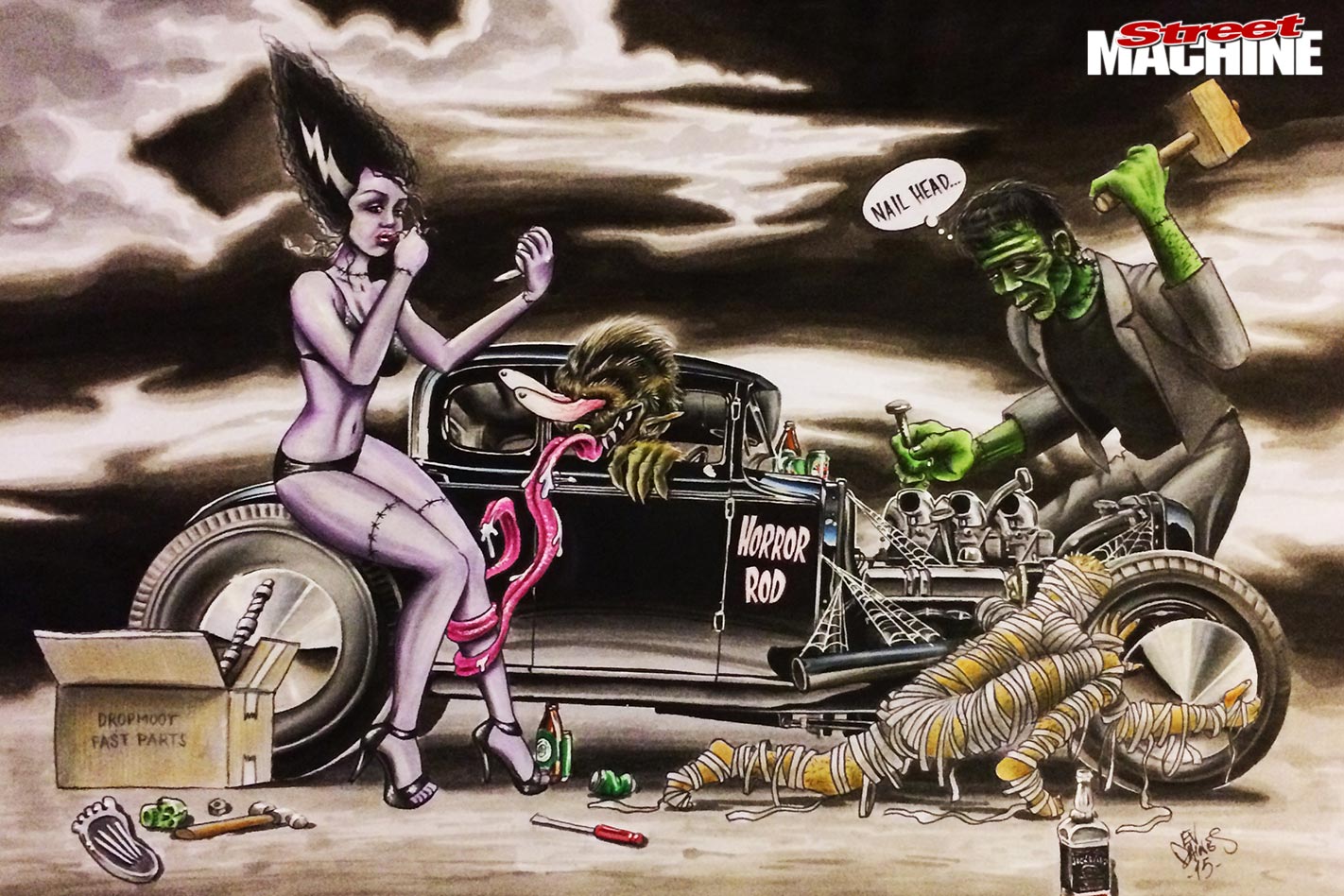 2. "This was just for fun and I ended up using it for my business card," says Evan. "The black coupe is running a Nailhead so I thought it'd be funny to put Frankenstein hammering a big nail in, and I got my girlfriend to sit on a wheel so I could match the proportions for the Bride of Frankenstein. I think this was when my artwork started to get better." 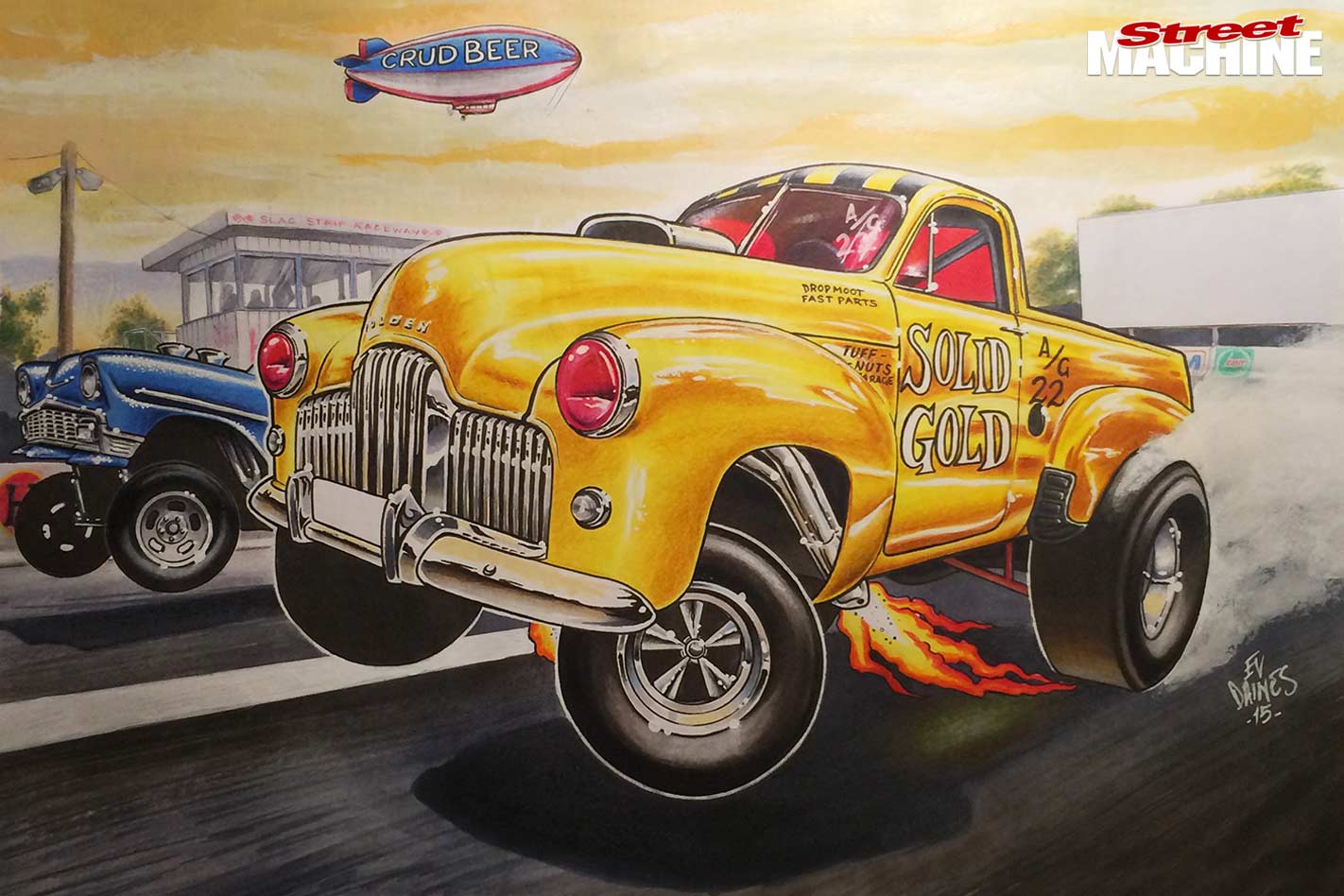 3. Evan snuck a few cheeky hidden items in the background of this picture of a gassed-up Holden ute racer. “It says ‘Slagstrip Raceway’ on the control tower, ‘Crud Beer’ on the blimp, and instead of Castrol it says ‘C**t’!” 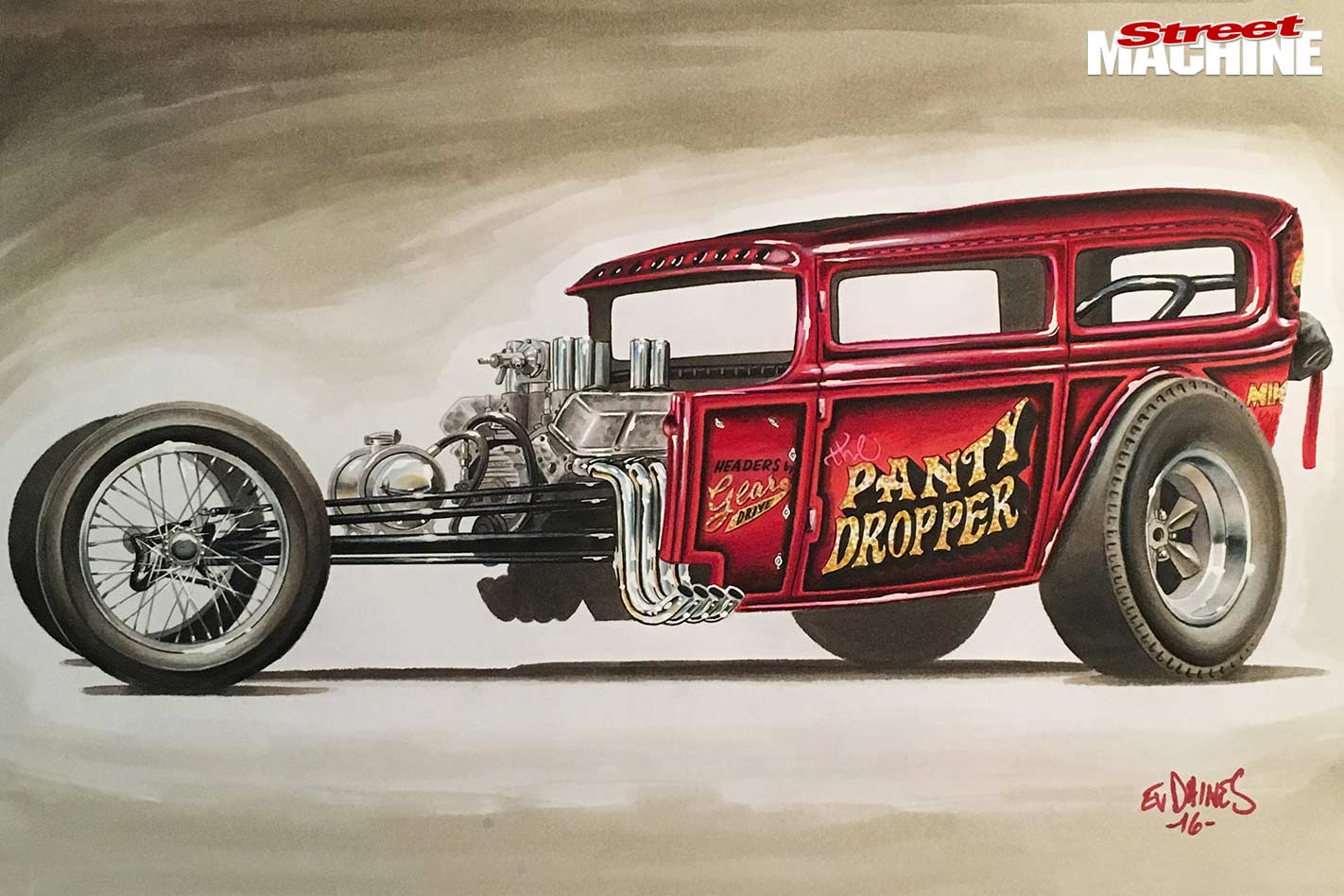 4. Pat Hampton’s Pantydropper dragster is a commission piece from the ’States. “We did a lot of messaging back and forth so I could get pics of the engine from the right angles, and bits and pieces that weren’t yet on the car at that stage,” Evan says. “I think the hardest part was all the chrome on the engine and the spokes on the front wheel – those took forever.” 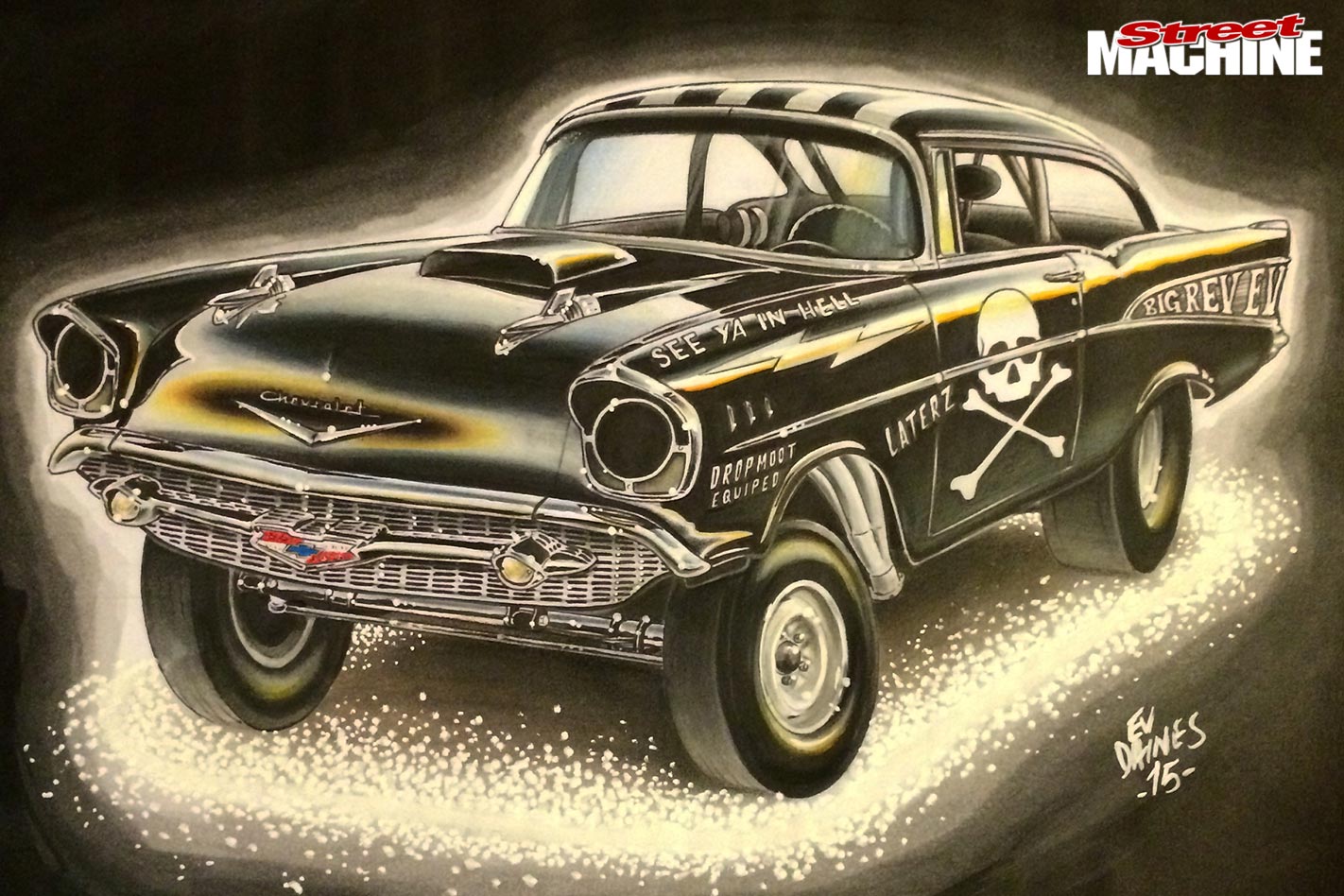 5. “This was inspired by the Fast ’57 that was in Street Machine,” says Evan. “I’ve always been a fan of ’57 Chevys and I really liked the reflection on the paintjob, so I drew that up as my own fantasy gasser, the Big Rev Ev Chev!” 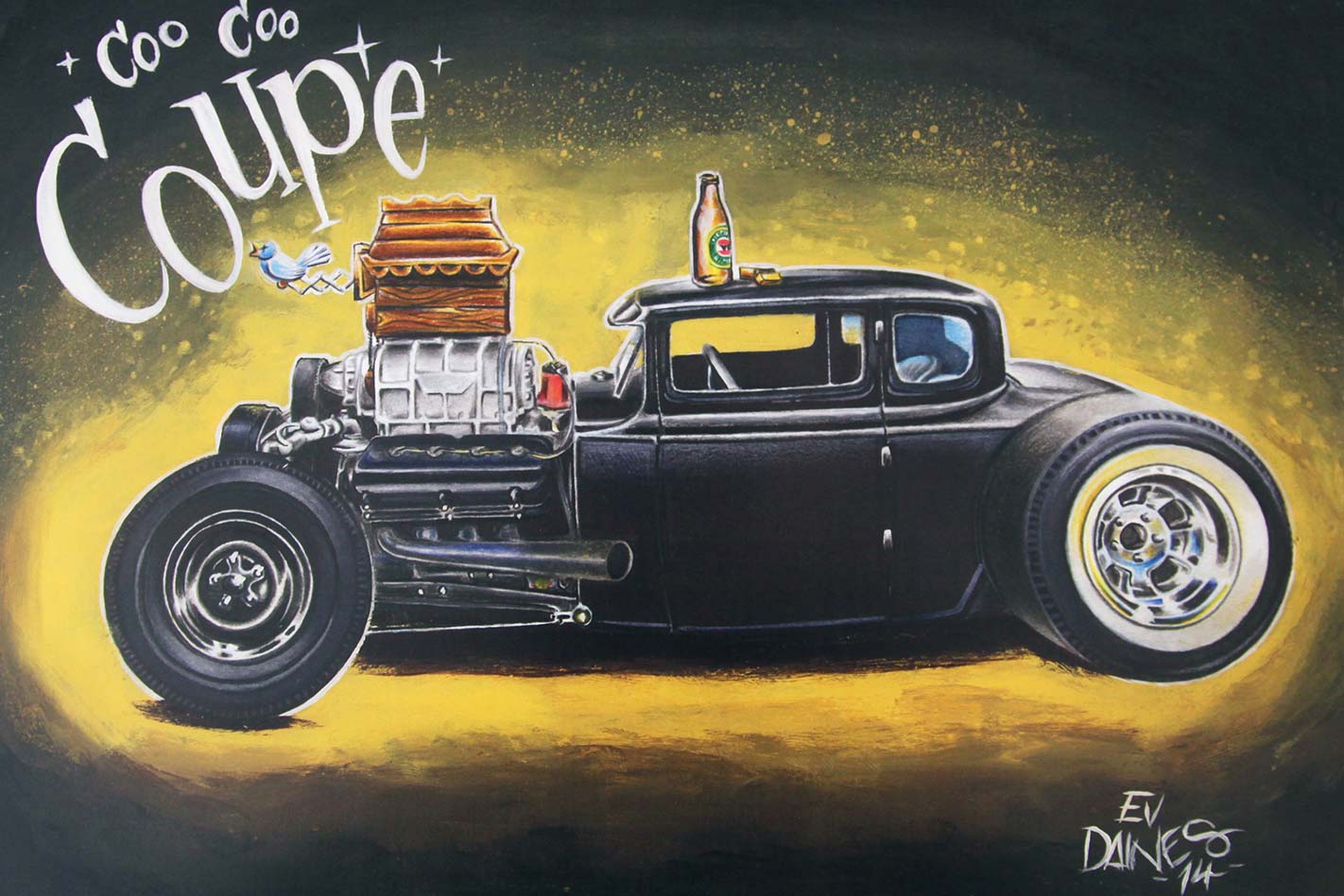 6. Evan rates his Coo Coo Coupe as his personal fave. “A little hot rod with a blower and a cuckoo clock on top – I wanted something funny and a bit out-there,” he says. “That was the first car drawing that I really put a lot of effort into. I liked the result and it made me want to step my game up.” 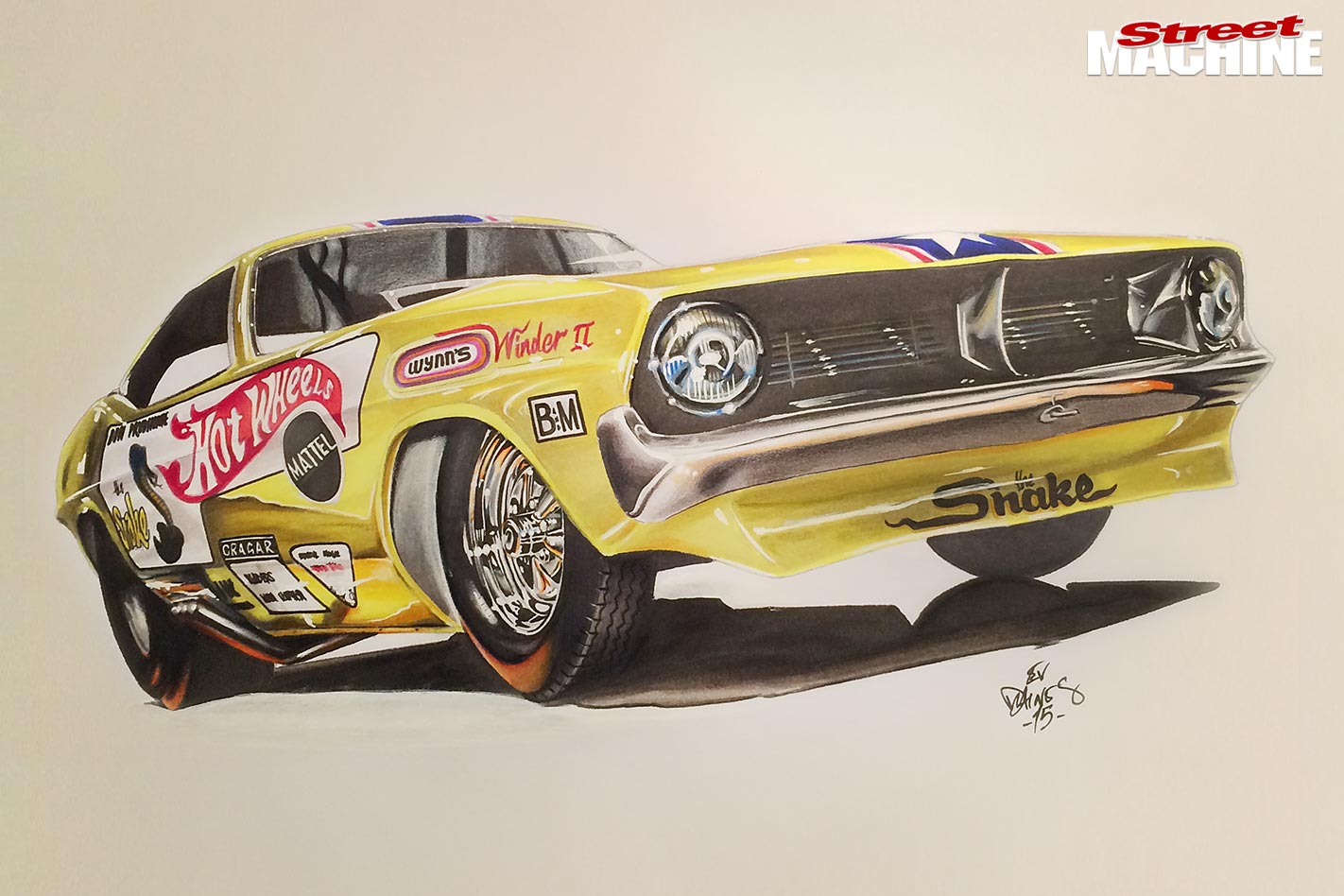 7. “I was stuck for ideas so I thought: ‘What cars have I always loved over the years?’ This is an iconic dragster that I always liked, a famous Hot Wheels Funnycar driven by Don ‘The Snake’ Prudhomme in the 70s. It’s a cool angle, too – something different.” 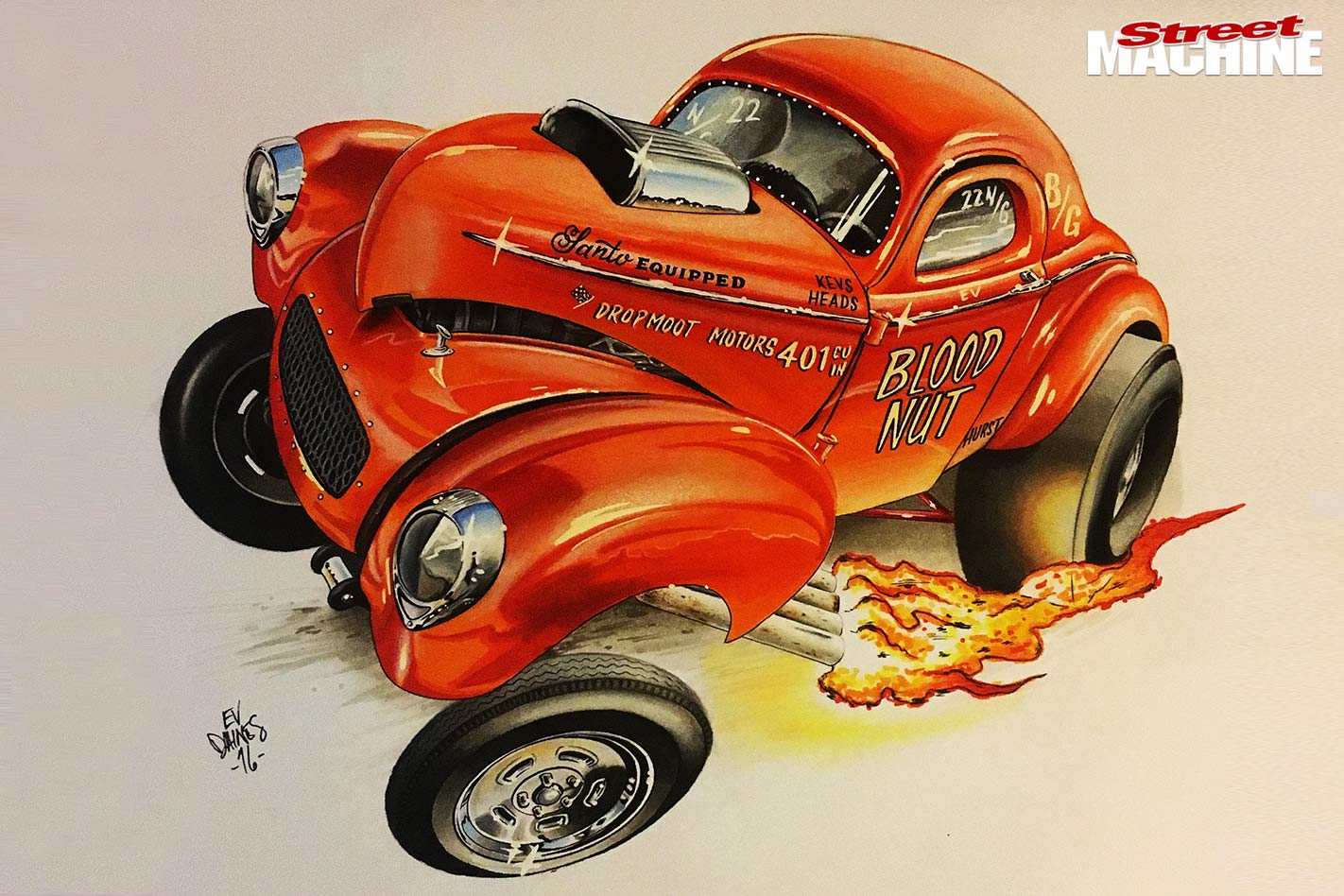 8. “Ryan Ford and I sometimes throw around ideas for names for cars and he came up with Blood Nut,” says Evan of his orange Willys gasser. “I wanted to give it that look like it’s wheel-standing coming off the line, falling apart, twisting out of shape with the guard loose and the hood lifting up.” 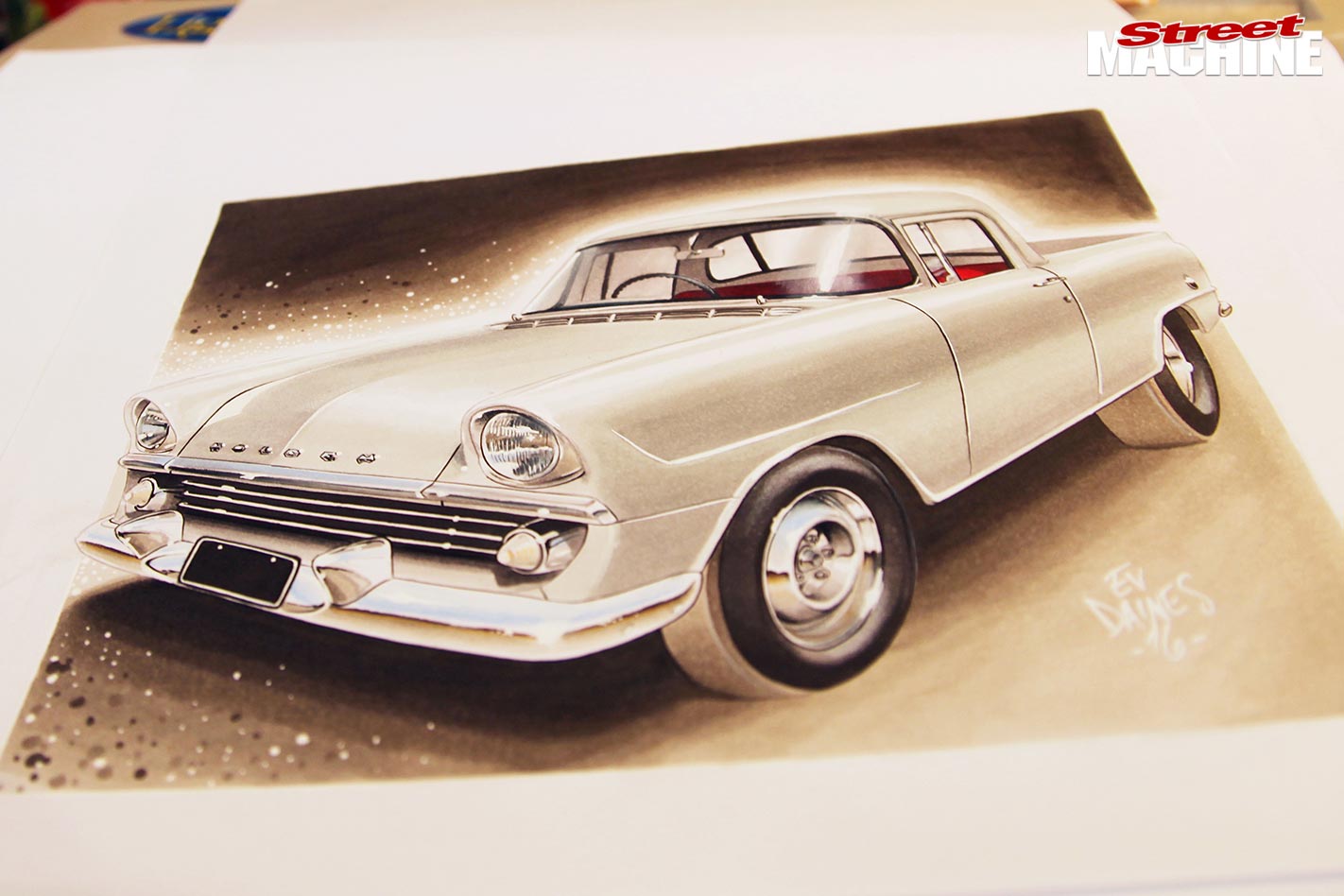 9. “This was an FB ute I wanted to buy but I missed out on getting it by about 10 minutes! I was so frustrated I had to get it out by doing the artwork.” 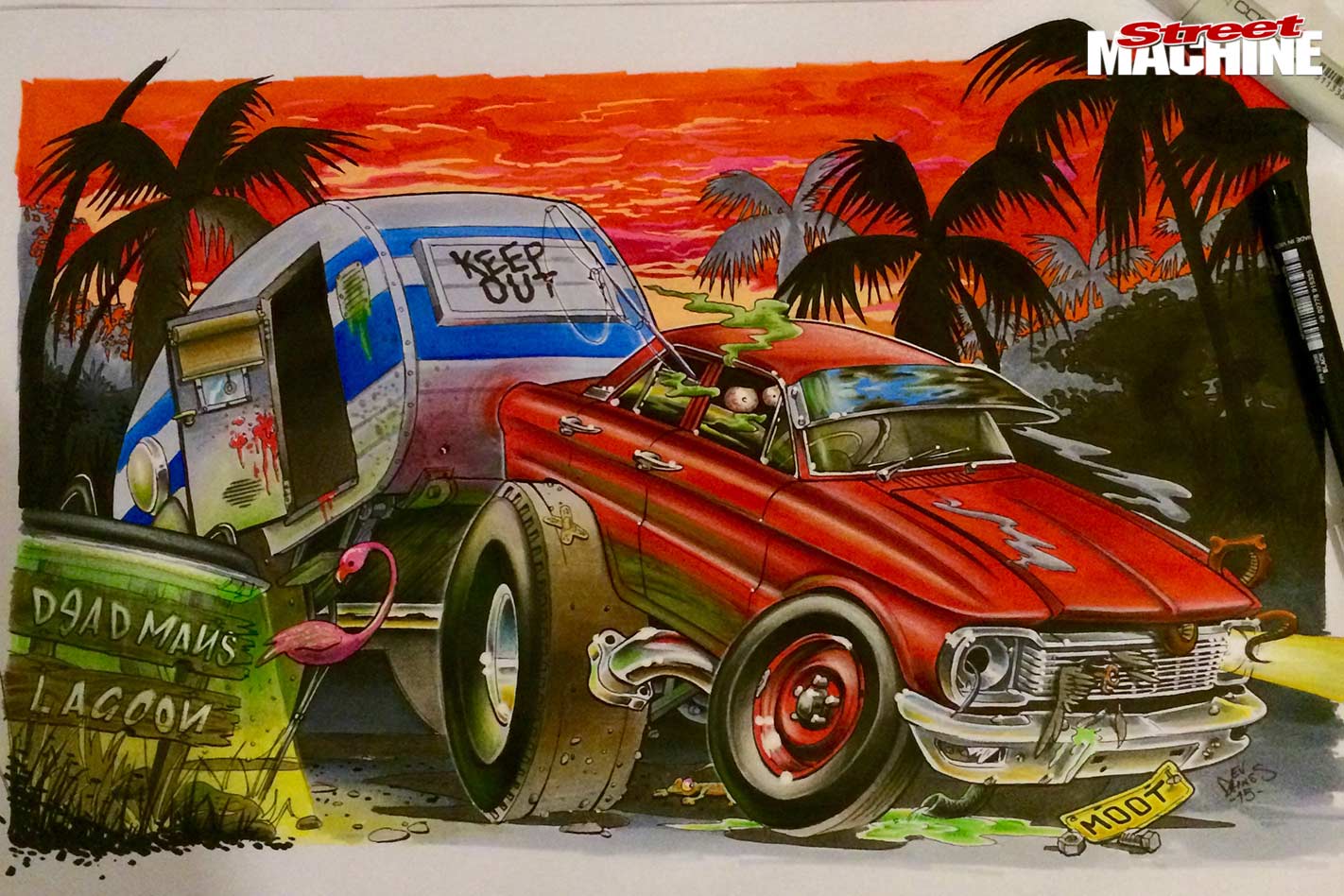 10. Evan originally drew a Kingswood towing the caravan out of the lagoon but changed it to hopped-up XP due to accusations of Holden bias. “A few people had said, ‘Oh, you’re a Holden guy,’ which I’m not really, I like anything old-school, so I changed it to a Ford.”