Finding an advantage in motorsport is what keeps racers, team owners, and crew members awake at night.

An improvement of a few seconds in an hour-long race can cost millions of dollars. There are long hours at the workshop, and even longer hours at the track, all in the pursuit of efficiency and speed.

One area where teams can focus on is the pitlane. It’s the place where a race car will be at its slowest during a competition (catastrophic failures and crashes aside), but it is also ripe for gaining an advantage. Some of the biggest races in the world have been won and lost in the pitlane.

In Australia, the crew at Brad Jones Racing are the kings of fast pit stops. In the 2017 Supercars’ Pit Stop Challenge leaderboard they held two of the top four positions (first and fourth), and are undoubtedly one of the fastest crews in pitlane.

So, what’s their secret? Well, one aspect is a tattered old Ford AU Falcon with butchered guards that appear to be held on predominately with masking tape. 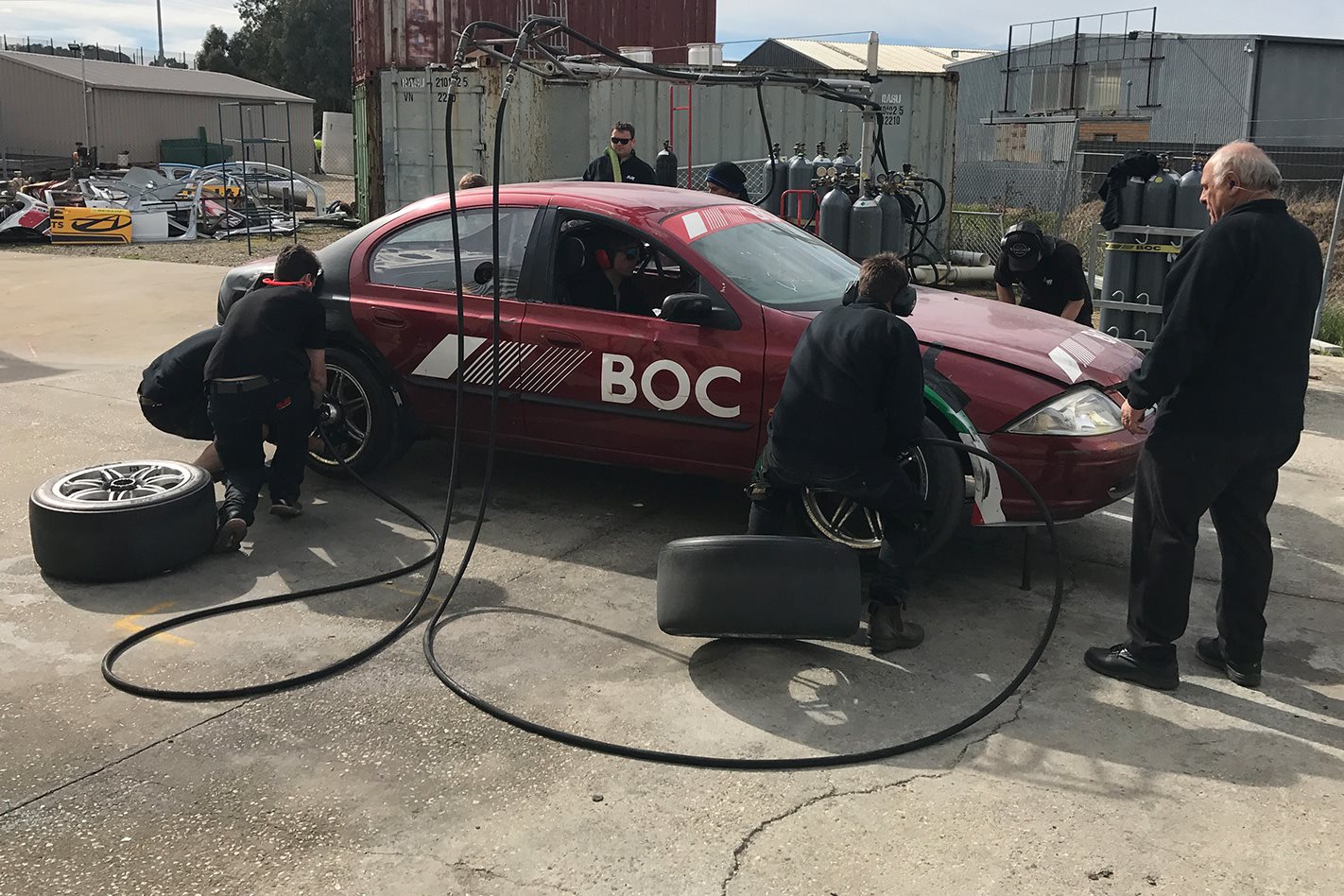 But don’t let its looks deceive you, this Falcon is actually the team’s pit stop practice car, and allows the crew to hone their skills away from the race track.

Now, every team in the pitlane has a pit stop practice car, but there are none quite like this one.

Danny Vickers, chief mechanic at Brad Jones Racing, explains the practice car is one of the older members of the team.

“It is just an old six-cylinder AU Falcon that we got a long, long time ago from Ford when we were a Ford team,” he told Wheels.

“There is no real science to it, it’s just something that we have got so that we can practice three days a week.

“It is something that helps so we don’t have to mess about making sure we have got a race car ready to take out the back and push around. It just makes life a lot easier.”

Now, the keen eyed of you would have noticed that this isn’t a regular tatty AU Falcon. The centre-lock racing wheels would be the first indicator of that. But in order to get the most out of practice, the once road-going AU had to be modified to properly reflect the team’s 484kW Holden ZB Commodore Supercar.

“We put air jacks into it, along with running gear, so it is comparable with respective uprights and wheels to what we run now in the Commodore,” Vickers explains.

“It has got the brakes, wheels, and uprights on it that we use in our current-spec cars.

“We have also retro-fitted the spats or guards [from the Commodore], for want of a better word, onto the side of it, so that it is roughly the right guard profile and the right height off the ground.

“It is more comparable with what we have got in our Commodore Supercars. The whole wheel arch is as identical to what we can make it to a V8 Supercar.”

Along with the race-spec suspension and brakes, the Falcon practice car also has the same fuel-filling mechanism of the race car. 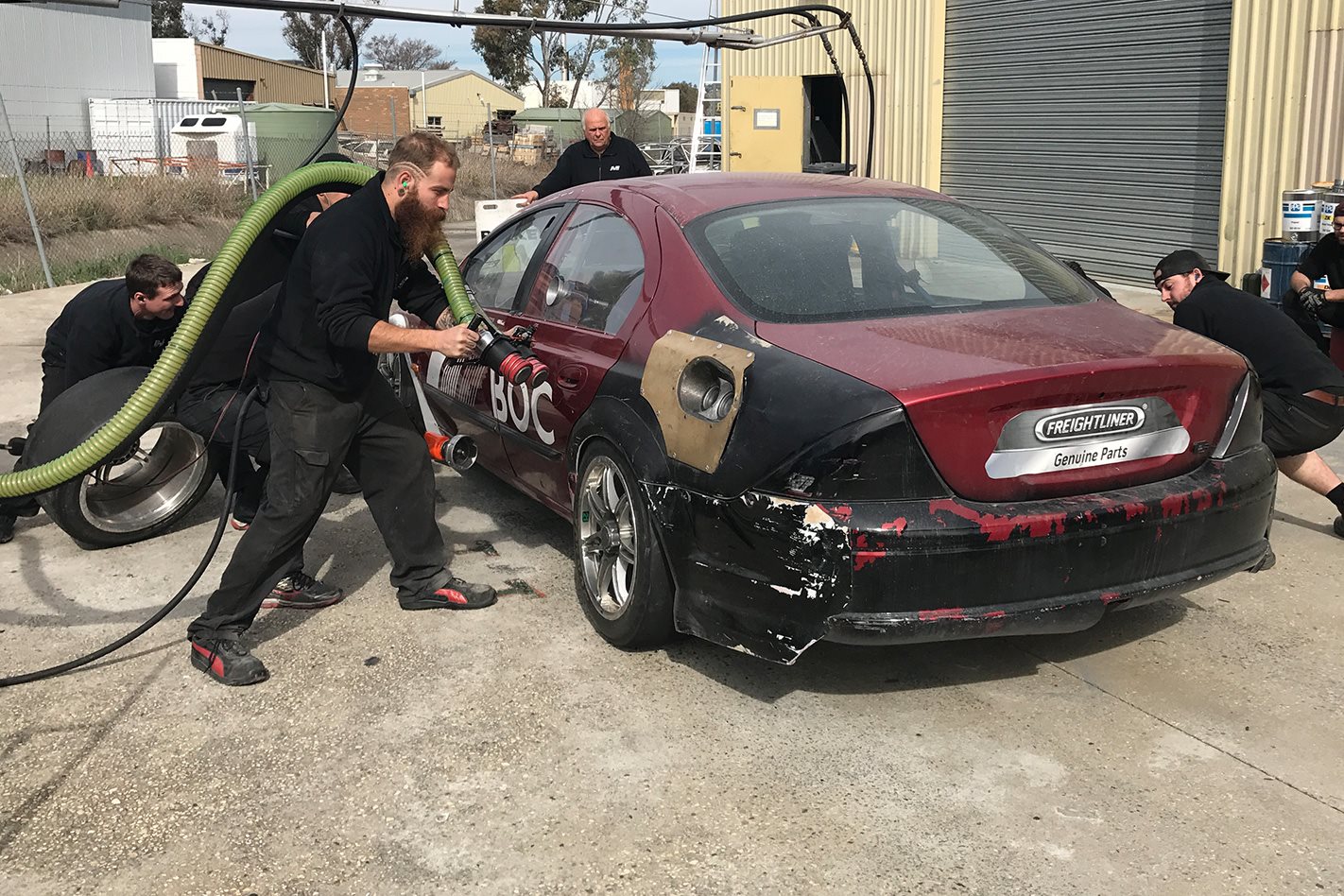 The BJR pit crew is able to replicate accurately the conditions they will be dealing with on a race weekend, down to the direction of the pit-boom and location of refuelling rig.

Making sure the eight-man pit crews are prepared for any situation is vital for the team.

“Since we have three cars, we need two different pit crews. What we will do is go through a couple of standard stops, which is four tyres and fuel, and we will also stack the wheels like we are in the garage, and then run out as if it’s a mid-race situation.

“We also run through other race-specific simulations. Races can be won or lost in the pitlane, so there is plenty of pressure to get it right, and be prepared.”

Vickers says the team carries “immense pride” in being the fastest pit crew in the Supercars championship.

So, while it may look battered, bruised, and much worse for wear, don’t discount this burgundy AU Falcon’s importance next time BJR adds another trophy to the cabinet.

This article was first published in 2017