Opinion: Keep calm even as lockdowns begin to lift

Fuel prices and empty roads look tempting, but we should err on the side of caution as regular life slowly resumes

As i write this (and I have to say that, as the lockdown situation in Australia seems to change on a daily basis at the moment), 98RON is plummeting towards $1/litre and roads everywhere are largely empty. Sounds like a dream, right? And yet the car must stay in the garage, no driving allowed, unless ‘essential’.

It’s frustrating, particularly when you can’t see a loved one you don’t live with, yet shopping at Woolies is like trying to leave your seat at the MCG after a packed cricket match. And what’s the harm in going for a drive? You’re by yourself, in a contained petri cell of your own fetid effluvium. No harm to anyone but yourself, right?

We get why it’s not allowed and honestly we’re in the camp of ‘stay home if you can’ at MOTOR. It’s only a month or two, or three, hopefully – hardly a sacrifice if it means all the people you know over the age of 65 or thereabouts don’t catch some horrendous virus, surely?

In fact, while things were looking frightfully exponential we even went so far as to suspend all road-testing at MOTOR. We felt that was the responsible thing to do. Thanks to some careful planning, you won’t be able to notice.

With the economy still ajar and business encouraged where it’s able to be done ‘safely’, we’re about to fire things up again. With a whole lot of hand sanitiser, it must be said.

And what an odd time it is. I write this literally from a tiny desk in my bedroom, like a teenager (I was in the garage, but there’s a very petrol-smelling 205 GTi in there and it just wasn’t happening). 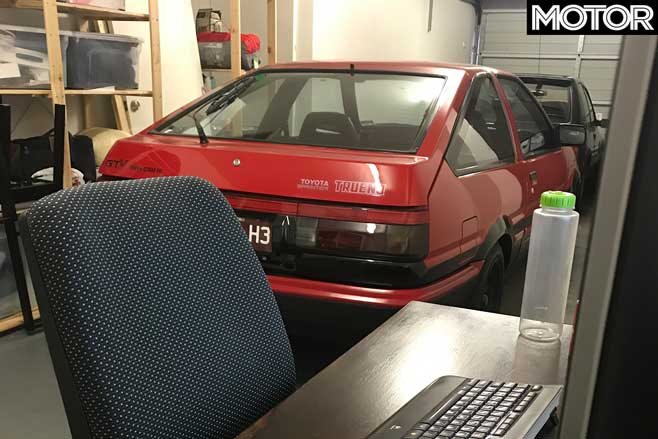 The MOTOR crew are all bailed up at home, going slightly nuts not being able to drive anything, and having to look at each other through a computer monitor (as little as possible, I hasten to add). And without a test car at the moment, my grocery-getter is my Toyota AE86 Sprinter. Driving it once a week is just plain bizarre too; I’ve half-forgotten how to drive (some might say I never knew to begin with) and every drive is like rediscovering the car anew.

I desperately miss driving, if anything just as a thing with which to engage one’s mind. I certainly will not be taking it for granted again after all this is said and done. And my oh my, the first few weeks the roads are going to be a circus when everybody’s allowed back out on them after not having driven for however long...