We fang BMW’s fast-but-aloof M5 in its homeland to see if autobahns and alpine passes can bring out its best.

DOES BMW’S F10 M5 measure up to its predecessor? Wouldn’t have a clue; I’ve never driven the atmo V10 E60 or, in fact, any M5 at all. It’s taken me a year just to get around to driving the ‘new’ one. Think my lack of BMW M5 experience is a poor position from which to judge the current twin-turbo M5? I think it’s the perfect perspective, because I’m measuring it not against smaller, lighter atmo in-line sixes, a V8 or a V10, but holding it up next to a legend; an iconic image built up in my head by decades of folklore. That legend is defined by my lasting visual: the streak of howling, V-maxxed E34 in a ’90s magazine test.

Think sports sedan – that’s the M5 more than any other car. It’s a bigger, four-door M3 that can carry the family or a car-load of execs, crushing kilometres with consummate ease, before turning an alpine road into a rollercoaster. A car that cossets its occupants and cruises like a heavyweight one moment, shrinking around you the next, changing direction like a featherweight, and letting the driver subtly and joyously adjust and slide it, still covering ground with devastating pace. Right? 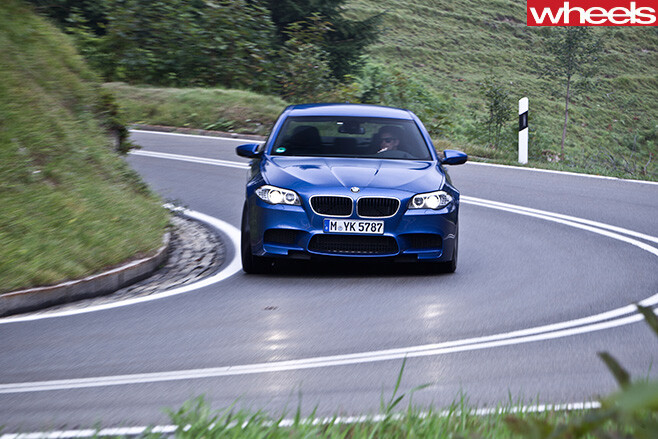 In its current iteration, not according to Wheels’ Glenn Butler, who wrote in April 2012 that “the M5 is a tangible step away from M’s core value that once placed the driver above all”. More damningly in this seemingly inevitably-downsized-turbo world, he declared it soundly beaten by Merc’s newly twin-turboed E63 AMG.

But is it simply a case of horses (all 550 of ’em) for courses? Were the twists of Lake Mountain Road in Victoria’s Yarra Ranges too tight for a now-1945kg M5 to deliver its best? Would a mix of autobahn arrowing, and soaring, sweeping, mountain-road scything let the big Bee Em demonstrate its full skill-set, and leave me stunned at its awesome breadth of ability?

In short, would it make more sense in its native, car-loving Germany than it does in Australia? It seemed only fair to find out.

TWENTY-SEVEN years late to the M5 party, I land in Munich on a grey, Tuesday morning, where a Monte Carlo metallic blue, twin-turbo V8 four-door is waiting, parked next to the autobahn. 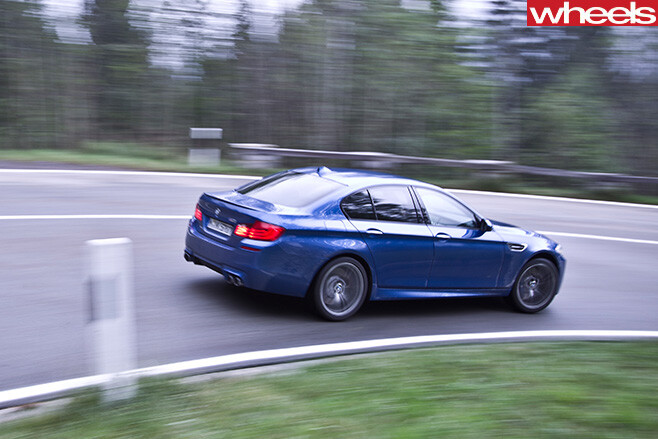 Ahh, Deutschland: land of beer, sausages, and crazy sex. A country in which you can buy a female-themed travel receptacle for your penis out of a vending maching at the airport, as I discover, while having a whizz. I’m driving an M5 to Italy, I tell the customs officer, “You know zere is no speed limit?” he asks. “Yep.”

This is the land of fast, safe, fun high-speed driving that we enthusiasts dream of. Here, I’ll blast away the frustrations of conservative limits, officious officers, and fast-lane daydreamers with one, long squeeze on the right pedal. With that thought, it’s onto the Bundesautobahnvia the Munich ring-road for a Vmax.

Erm, not quite. It’s actually straight to the servo for a packet of chips and an Austrian energy drink to ease my grumbling stomach and jet-lagged mind, and help me summon the focus needed to hustle the two-tonne sedan the way the M-legend says I should. 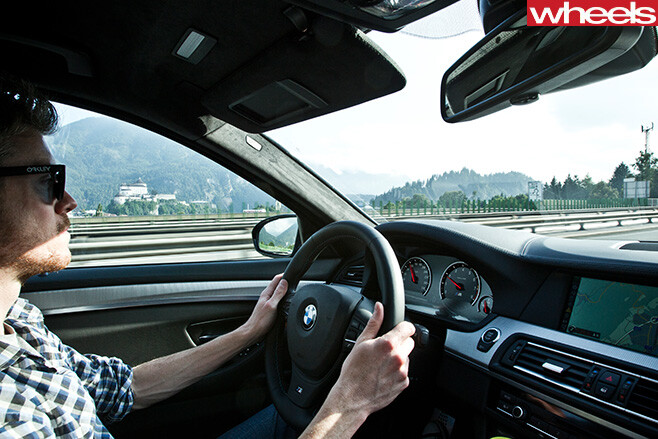 There’s a moderate amount of traffic, but with 680Nm at 1500rpm, the super sedan zaps into gaps as quickly as they emerge, with a gruff, muffled metallic note that isn’t as distinctly V8 as most V8s.

There’s always someone faster and slower than you – a grimy Astra spears past me, and I leapfrog a 911 – which is a realisation lost on the common Australian Highway King. You know the guy: “No-one overtakes me!” With egos gone, everybody can get where they’re going at whatever speed they like. 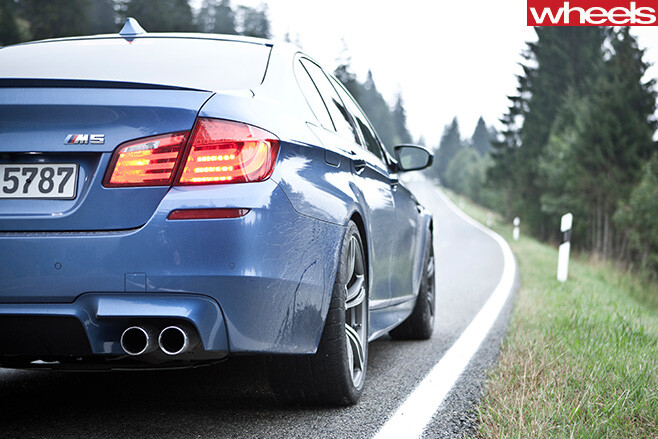 I settle into a 150-to-180km/h rhythm, but even at this speed it’s easy to become that slow guy in the fast lane if you’re not paying attention. But a momentary concentration lapse won’t incite rage in the driver of the car closing in, just a flash of their lights. Without fear of cops or cameras, I just squash the pedal and get out of their way. In the reverse scenario, where I’m the fast-closing car, I give thanks that the glacial overtaker, frightened of going fast by persistent speed-kills propaganda, doesn’t exist here, and they get out of my way, too.

I’m barely aware of the car; it delivers everything I ask of it, is comfortable, cultured, and quick, but a bit too polite. I point the roundel towards the Alpine town of Bayrischzell (see panel, below) to reveal driving roads and, I hope, a layer of ability deeper than mere ‘accomplished tourer’. Here, I want the M5 to be just a bigger M3, and I’m prepared to forgive slightly slower responses – a reasonable trade for the things the M5 does better than a BMW M3. That’s exactly what the M5 should be – why not?

On a superficial level the M5 has the talent, and will likely please plenty of owners – enormous grip, flat cornering, 0-100km/h in 4.5sec and hugely powerful brakes – but it’s all a bit aloof. The throttle’s not as sharp as I’d like and the steering isn’t communicative enough. When those 412kW do come rushing in, they flummox the chassis, or, at least, that’s what the apoplectic ESC light says.

So, the M5 works in Germany, but it still doesn’t excite in the way it should. M5 legend shattered, just like that? Not quite – I still need to drive an E39, maybe an E28, too. 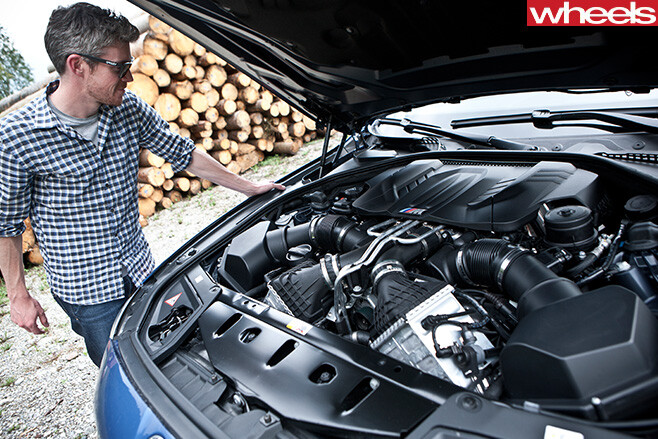 Germany, and its autobahns, though, they’re pretty close to the driving paradise that legend has us believe. With speed up, so is concentration, meanwhile frustration, and travel times are down. It’s plain good fun to wind the needle clockwise with a clear mind.

BMW tells us turbos can almost match the switchblade response of a great atmo engine, but it’s Mercedes-Benz that proves it. See, this isn’t just an atmo-is-better-than-turbo thing – the twin-turbo E63 provided Butler the sports-sedan experience he sought back in April, and the M5 couldn’t, and that’s down to a shift of the M Division’s ideals.

The 535d can demolish autobahns (or freeways), which should leave room atop the range for the M5 to be a bit of a lunatic. Today, despite being devastatingly fast, and a handful at the limit, it keeps the driver at arm’s length. More like a faster 550i than the M5 legend held in my mind.

“It’s a good place to try for a vmax”

Robbo’s trip advice: “Once you leave the Munich ring-road the autobahn is normally unlimited; good place to try for a Vmax. Austria and, sadly, Italy are no longer safe for serious speed.

“Just before the German-Austrian border feed Oberaudorf and Bayrischzell into the nav. The road connecting these two towns is fantastic for a serious drive on mountain roads – I once did a 911 Turbo-versus-360 Fazz comparo here.

“The A22 from the Austrian border to Verona is a fantastic piece of motorway. Be warned, the Italians now have average-speed cameras along the route. Wish I was coming with you.”