BMW is back hunting sports car enthusiasts with its cracking new BMW M235i coupe. But so is the ballistic Mercedes-Benz CLA45 AMG.

BMW is back hunting sports car enthusiasts with its cracking new BMW M235i coupe. But so is the ballistic Mercedes-Benz CLA45 AMG.

Don’t you hate it when something you once adored turns a bit ugly? It happens to bands, brands, friends, partners, venues, burgers, cafes, clothes, and plenty of other things, not to mention cars. One minute you’re loving each other’s company, wondering how anything or anybody could improve on right now, and the next, something changes. 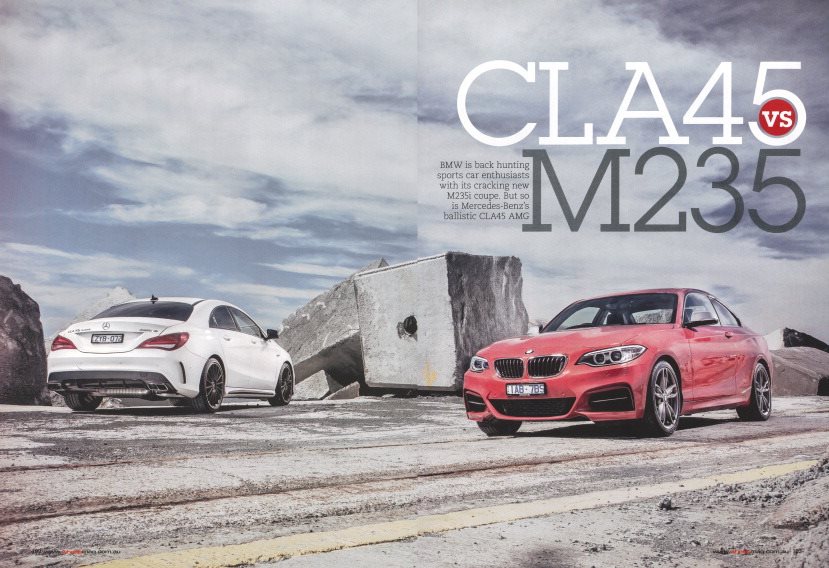 That’s BMW’s last decade condensed into a paragraph. In 2002, before run-flats, techno-nerd steering and exponential product proliferation overshadowed its Ultimate Driving Machine focus, virtually every BMW defined great steering, supreme balance and a brilliant ride/handling mix. They won comparo after comparo and were consistently fantastic to drive. But somewhere along the way, the magic dynamic sparkle that was pretty much a guarantee in every machine from Munich, large or small, fast or slow, was deemed less important than one-upping other German brands’ technology. “Look at me, my tyres still work when they’re soft”. Great. 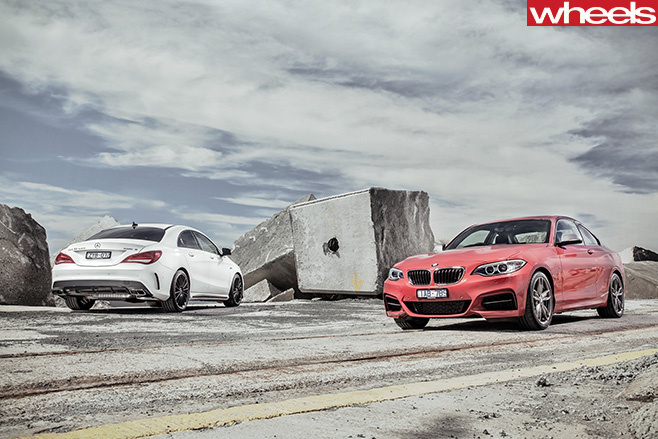 The BMW 2 Series coupe represents a fresh start. Based on the current-generation F20 1 Series platform, the Two is quietly intended to be BMW’s comeback kid. After a failed attempt by the dorky, poor-riding BMW 1 Series coupe (2007-13) to revive the spirit of the iconic BMW 2002, the 2 Series coupe appears to be equipped with the arsenal to bolster a nameplate that, come November, will include a rather pregnant-looking front-drive MPV.

But if there’s a 2 Series good enough to wipe BMW’s dynamic slate clean, it’s this one – the six-cylinder, turbocharged M235i. And what better foe to throw it against than Mercedes-Benz’s similarly priced CLA45AMG. It, too, is a coupe (if you believe Stuttgart’s marketing dreamers) but with four doors, rather than two, and sporting AMG’s firecracker 2.0-litre turbo donk with just four pots. And a whole lot of menace. 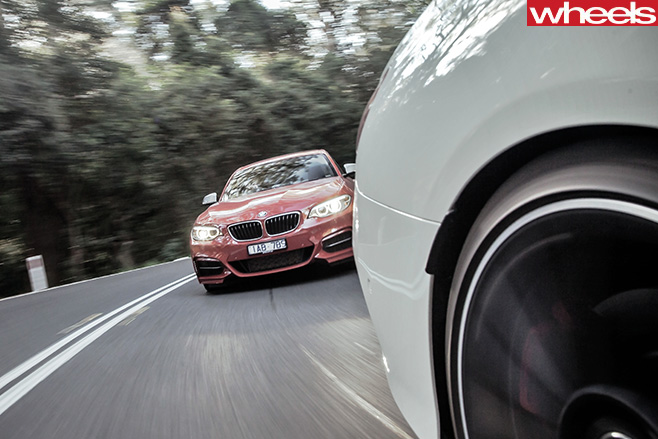 Visually, that’s one thing the M235i definitely doesn’t have – menace. What it does have, though, is elegance – marking a return to the crisp, beautifully proportioned BMWs of the pre-Bangle era, with a bit of sporting spice. The M235i’s large front air intakes, sculpted bumpers and dual rear exhaust pipes hardly scream ‘performance’, but they neatly garnish the body’s hippy lines – playing up its rear-wheel-drive underpinnings – and its broad, handsome tail. The M235i is an attractive little coupe, which is something few people said about its 135i predecessor.

The CLA45’s upturned-boat shape isn’t a universal crowd pleaser like the C63, but at least it’s distinctive, and in this case, resplendent in fashionable white with black 19s, gloss-black mirrors, front splitter and rear diffuser, and a darkened-glass sunroof. No Mercedes-Benz CLA has ever looked cooler, and this one also boasts $1990 worth of sports suspension, which drops it slightly closer to the tarmac and turns what was already a pretty sharp mover into an uncompromising handling supremo. 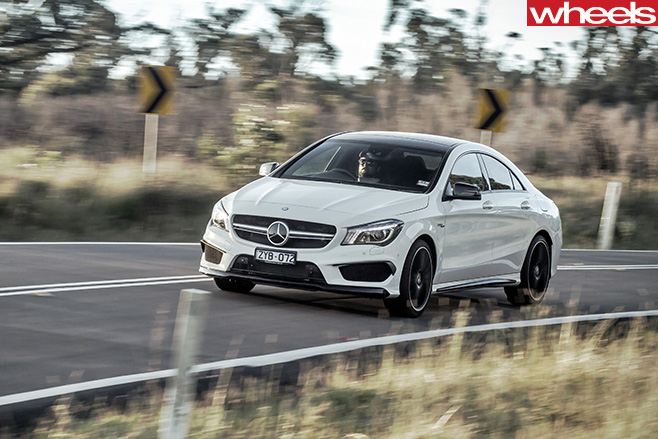 But what about the BMW? Isn’t the 2 Series meant to be the second coming? In the right environment (such as the tight, smooth, gorge section of the Putty Road), absolutely. Compared to the super-firm CLA, the M235i’s controls feel more remote, yet underneath those layers of what some would call refinement and others cotton wool, is a terrific chassis with massive helpings of balance, grip and rear-end purchase.

Even the M235i’s turn-in is brilliant. Trail some brake into a tight 35km/h corner and you can feel its chassis pivot, instinctively setting itself up for a rapid-fire corner exit. Unlike the wayward M135i hatch, which never had the rear suspension control to handle the turbo six’s copious grunt, the coupe’s power-down is fantastic. Even with ESC off, a hard driven M235i requires provocation to spin its wheels or step its tail out. Finally, a non-M Bee-Em with the abilities of its more exalted brethren. 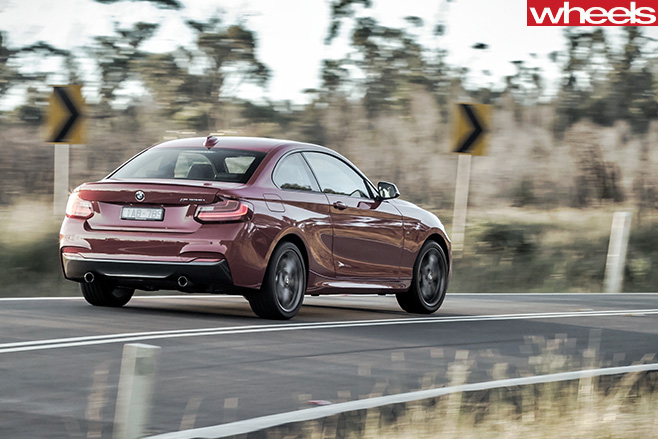 Admittedly, this 2 Series coupe does have an M in its title, but this isn’t a proper M car. Brilliant as the M235i’s chassis is, with an instant poise that it maintains in all of its adaptive suspension’s modes, the details (ie. steering and damping) fail to capitalise on its fundamental greatness.

On lumpy surfaces tackled in Sport mode, the M235i is unsettled and has far too much vertical movement, yet on a smooth and twisty road, it’s wonderful. Selecting Comfort mode calms things down a lot, though at one stage I reached for the gimmicky Driver Experience rocker switch to knock it back to Comfort, only to realise I was already there… 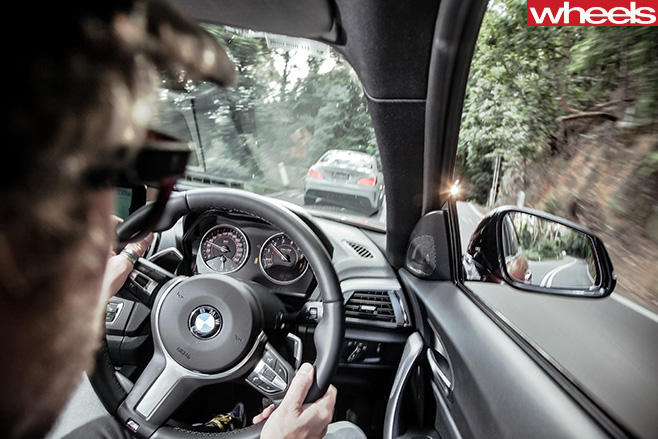 Frustratingly, you can’t individually configure the chassis set-up. You can have Sport for the drivetrain (which adds more exhaust rumble and richer induction noise) or chassis (firming up the steering and damping, and raising the ESC threshold), or both together. But you can’t have Sport steering with Comfort damping.

Unfortunately, none of the M235i’s steering options are ideal. The new three-spoke M wheel is superb, but the steering itself is noticeably electric at straight ahead. When cruising, you can sense a phase of numbness and feel the weighting change. In Comfort mode, it’s too light and disinterested, yet in Sport, it’s still too aloof for a performance coupe of this calibre. You spend much of the time wishing the M235i’s steering had a setting between Comfort and Sport, and that its damping did likewise. 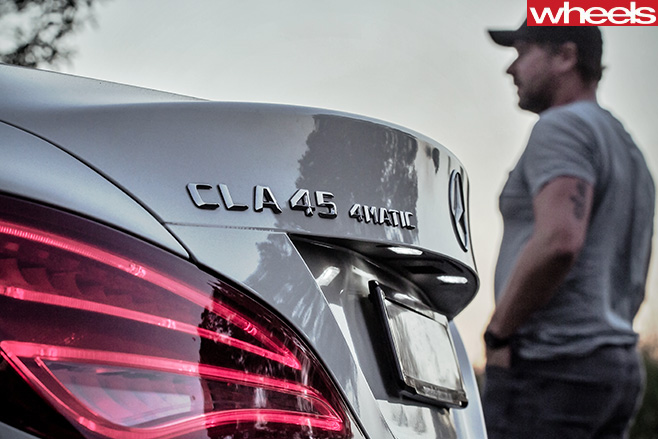 In the CLA, it’s one size fits all. And with optional sports suspension, that fit is tighter than a monkey giving birth to an elephant. Having driven a Mercedes-Benz A45 AMG fitted with sports suspension (20 percent firmer springs and dampers) around the Phillip Island circuit, the reduced understeer and heightened balance totally make racetrack sense. The surprising thing is, sports suspension works on the road too.

Whether heading to the shops for milk or hammering along the unforgiving Putty Road, the sports-suspended CLA45 is ultra-firm. But even with about as much forgiveness as a Taliban racial policy, it manages to avoid vertical pitch or suspension crash-through, and offers a level of body control so tight, it’s vice-like. Yet the firmer suspension has the added benefit of moving the CLA45’s centre-of-gravity pivot point rearward, reducing understeer to near-zero. The angles you can create with your right foot are even more satisfying in this CLA than they are in the standard AMG. 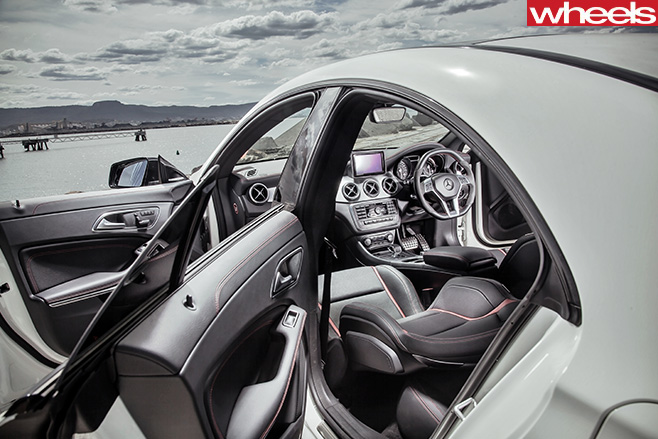 It remains resolutely fixated on its outside rear wheel, with an occasional lean towards the front, though you still wouldn’t call it understeer. Best of all, you can add full power when she’s resting on an outer-back and the CLA45’s forward thrust is life-affirming. And addictive – just like the blatting from its exhaust and the chattiness from its steering.

You get so much more feedback in the Benz than in the BMW. Even the CLA’s brakes talk more, with much cleaner pedal feel and less travel than the similarly effective BMW stoppers. And while the CLA’s steering can be unsettled by harsh mid-corner bumps, it’s generally pretty good, allowing its driver to easily trace a fine line through a bend. 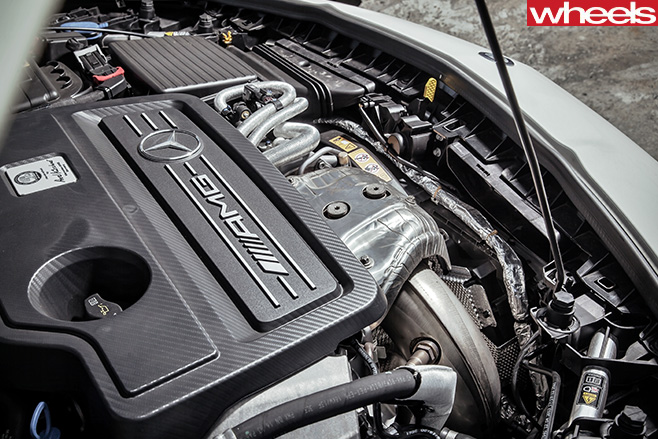 Despite their clear dynamic differences, it’s almost impossible to separate these two when it comes to performance. The CLA gets the jump off the line, thanks to all-wheel drive and a far more effective launch-control system, yet the difference to 100km/h is minimal (4.64sec for the Benz versus 4.97sec for the BMW) and by 200km/h, they’re separated by just 0.75sec. Near-identical 80-120km/h times confirm just how close these two are for acceleration, and even taking into account the philosophical and acoustic differences of a 3.0-litre turbo six versus a 2.0-litre turbo four, they’re both equally enriching.

In Sport mode, the M235i’s superb straight-six wails like a BMW engine should, with a crisp induction growl and a gorgeous rasp from its rear pipes, while the CLA45 doesn’t need to have a mode selected because it gets a sports exhaust standard. The Mercedes is the more gratuitous of the two – blatting, popping and whip-cracking from its quad pipes – but choosing a favourite is hard. I’d pick the M235i, simply because it revs to 7300rpm and is the best-sounding turbo-six Beemer there is. It also drinks less juice. 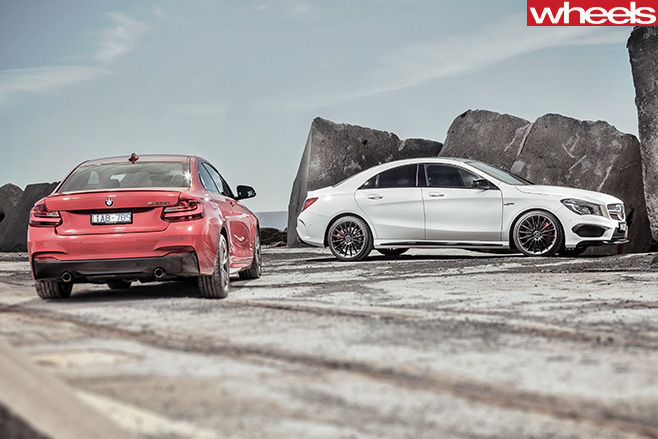 Distract your attention from the mega performance and dynamic rewards of both these coupes and you’ll probably wish you hadn’t. Each has cool frameless doors, but both share their interior architecture with lesser hatchbacks (namely the 1 Series and A-Class). The 2 Series has more tactile interior plastics than the CLA, but even with tinges of red colouring, it’s all very dark and textureless, with only the fabulous M steering wheel sexing up the place.

The CLA45 has some great touches, like its alcantara-covered wheel rim and its grippy, red-piped seats, but the test car’s plastic cover on the electric seat-bolster switches was loose and there was humming from the driver’s belt-height adjuster, which is something we’ve experienced in almost every A and CLA we’ve driven. 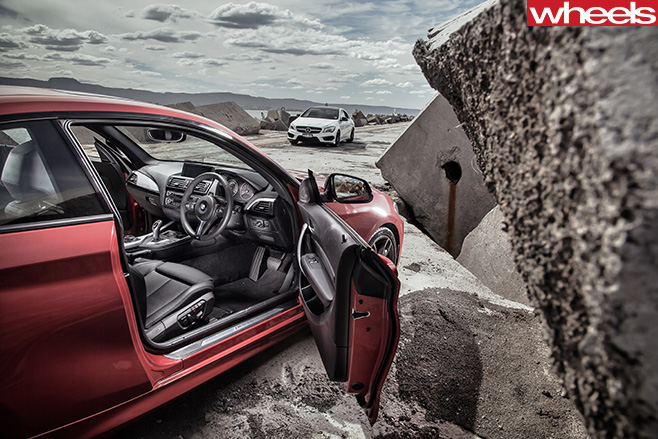 The Benz’s extra doors undoubtedly improve rear-seat entry and egress, though the BMW has one-touch front-seat sliders that electrically move it out of the way. Wedged back there, the BMW has more head and legroom, and a comfier, more supportive back seat, but it lacks the CLA’s centre armrest, cupholders and 600ml bottle holders. The CLA’s rear seat is flat and hard, though, with no under-thigh support whatsoever. You also need to sit slumped if you’re over 175cm tall to prevent your head from banging into the roof, and there’s bugger-all vision back there too. Ignoring its larger boot, the four-door Mercedes is actually less practical than the two-door BMW, which seems weird.

What it all comes down to, though, is purpose. While the M235i tries to be a sports coupe that appeals to a broad range of people, the CLA45 is singular in focus and makes no excuses for it. Brilliant as the BMW’s drivetrain and core chassis DNA may be, its damping and steering flaws expose the fact that it isn’t a true M-car. Admire its style, appreciate its practicality, love its balance and adore its engine, but it just doesn’t quite tie it all together. Not at the moment.

What is really, really surprising, though, is just how well the sports-suspended CLA45 works on the road. In this guise, it’s a brilliant performance sedan/coupe with a single-minded desire to thrill its driver. And maybe the front passenger. As a four seater, it’s borderline useless, but treat it as a two-plus-two, like you would the M235i, and be willing to accept its unforgiving ride, and it’s a thrill machine par-excellence.