Gauge tech: what you need to know about aftermarket gauges

MONITORING your vehicle’s vitals varies from convenient to imperative but gauges are the most practical devices for the job. Many older cars have few gauges and they’re often inoperative or inaccurate. To get a better idea of what’s going on, the simplest solution is to fit a set of aftermarket or accessory gauges. So let’s take a look.

Mounting it higher and closer to your line of sight also helps. Space in the instrument panel is limited, so only the most important gauges like tachometers and speedometers can be large; most are five inches in diameter. If there’s insufficient space for a five-inch tacho or speedo, then 33/8in versions are available. The other common gauge size is 21/16in, which is most common for gauges other than tacho or speedo. 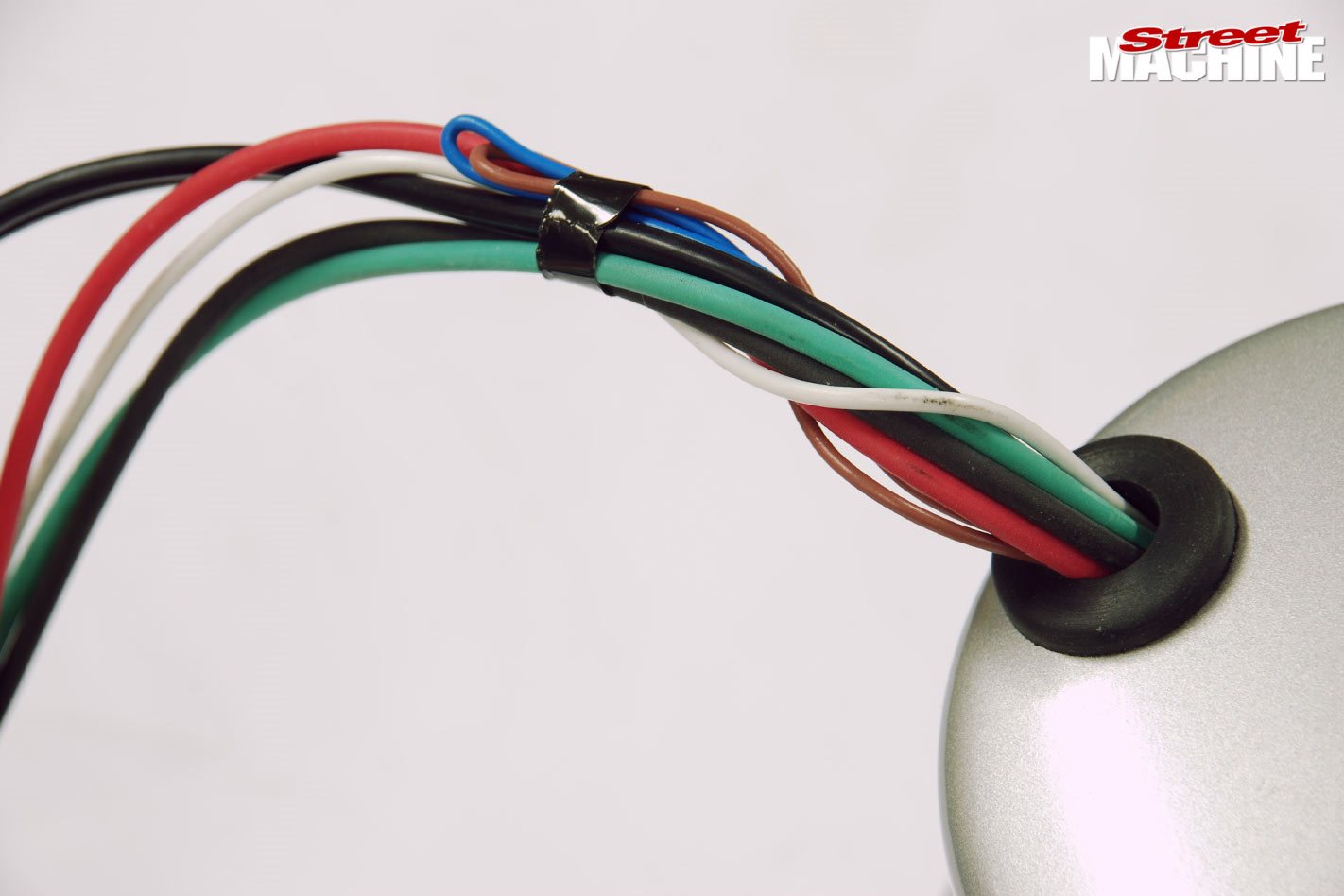 You’ll note some of the wires exiting this tachometer are actually loops, which need to be cut depending on whether it’s connected to a four, six, eight or 12-cylinder engine. Most modern gauges use DIP switches instead

On the other hand, mechanical gauges mean running fluid or pressure lines into the cabin, which is dangerous if they become ruptured. This is particularly so with mechanical fuel pressure gauges and is one reason gauge clusters are often mounted on the bonnet — where they also benefit from being closer to the driver’s line of vision. 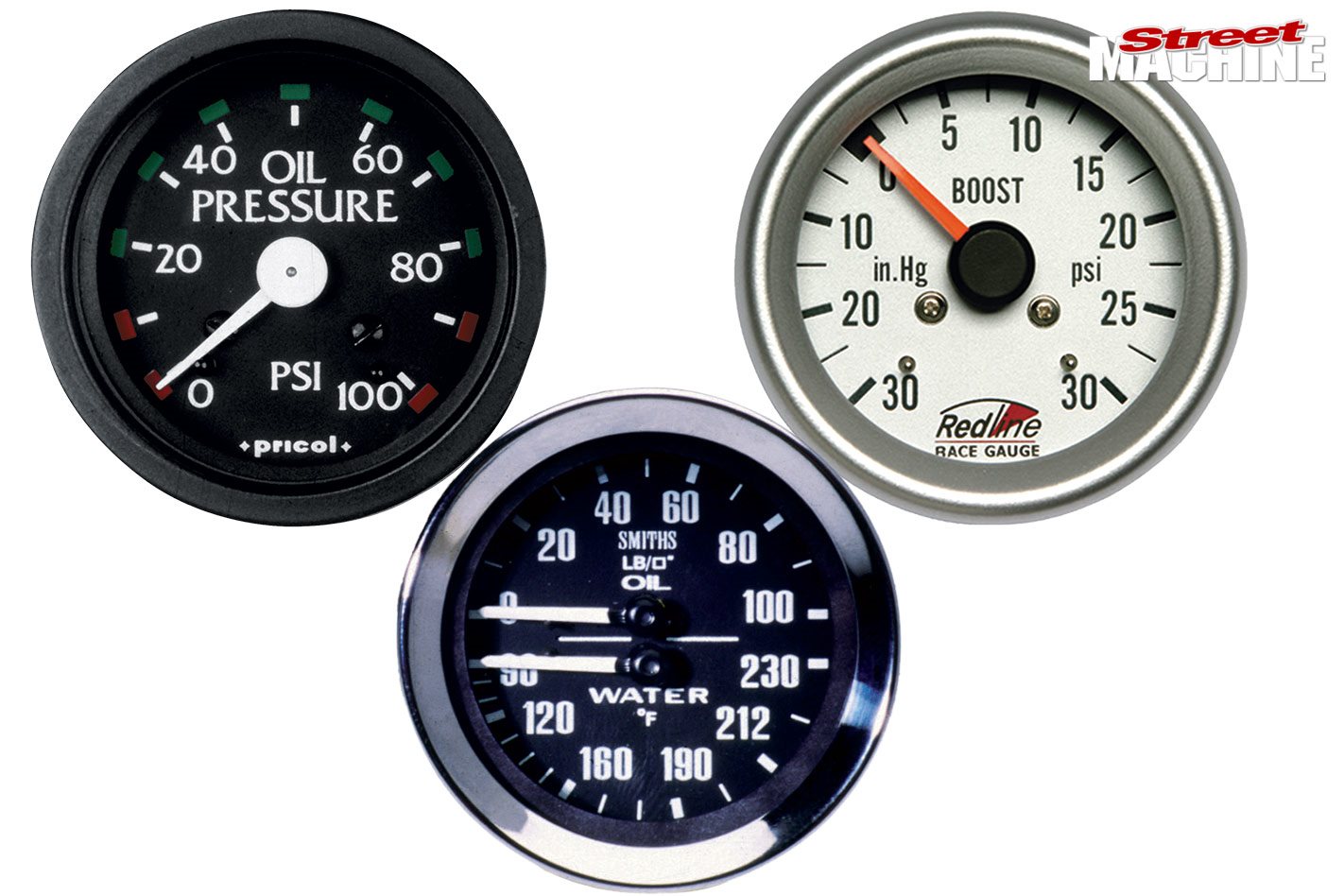 Note the Smiths twin gauge. This oil pressure and water temp gauge can be a godsend when space is at a premium

A mechanical fuel pressure gauge can be mounted in the cabin but it can’t have fuel in the line in this situation. Instead, an isolator is fitted, with non-flammable liquid in the line from the isolator on the firewall to the back of the gauge. 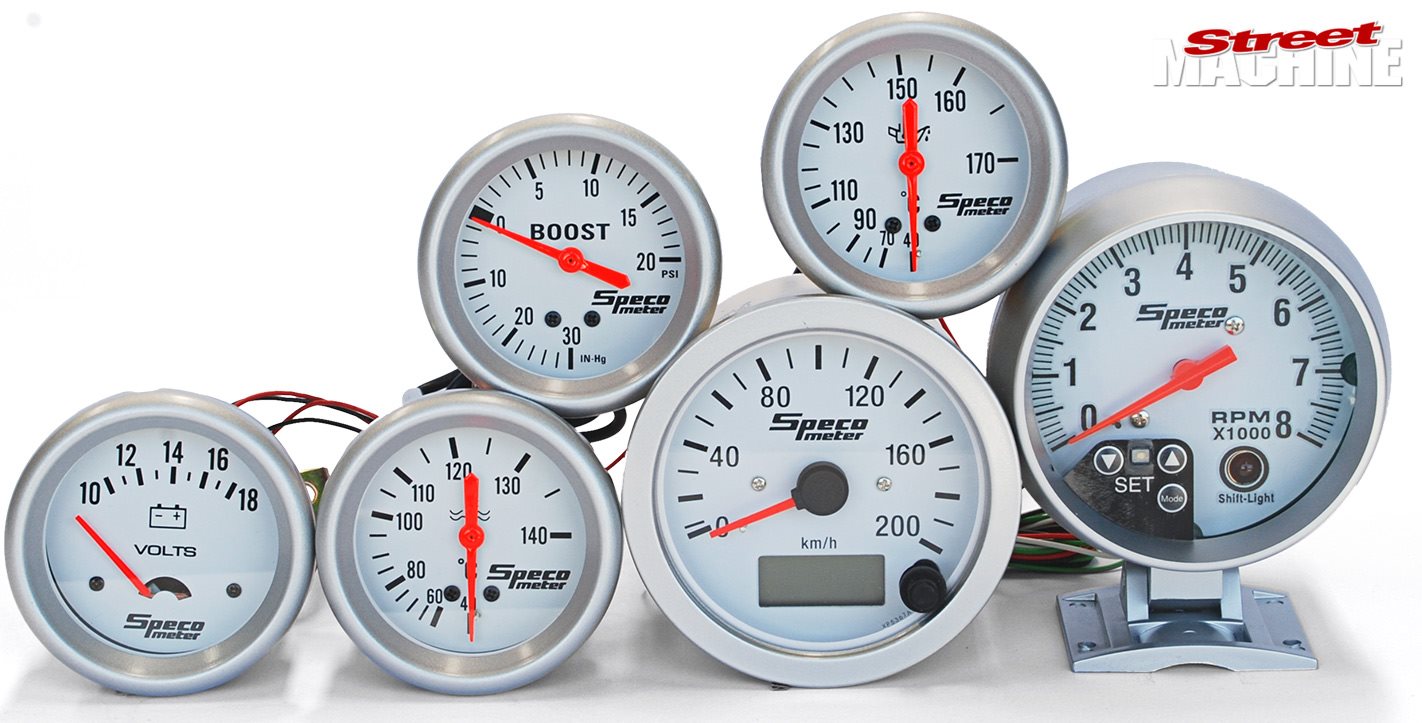 These Speco meters represent a good selection for a car. Most of the brands sell matching sets

With few or no electrical connections, some consider mechanical gauges easier to fit. However, the serviceability and the actual routing of the pressure or capillary lines can be problematic (always use braided lines for fuel and high-pressure applications). It’s far easier to route electrical wires through and around tight spots than it is a fluid line. Also, wire length is of no consequence, whereas pressure and capillary lines are either fixed in length or need to be kept as short as possible. Electric and mechanical gauges work well; but what types are available and why would you need them? Here they are, in alphabetical order. 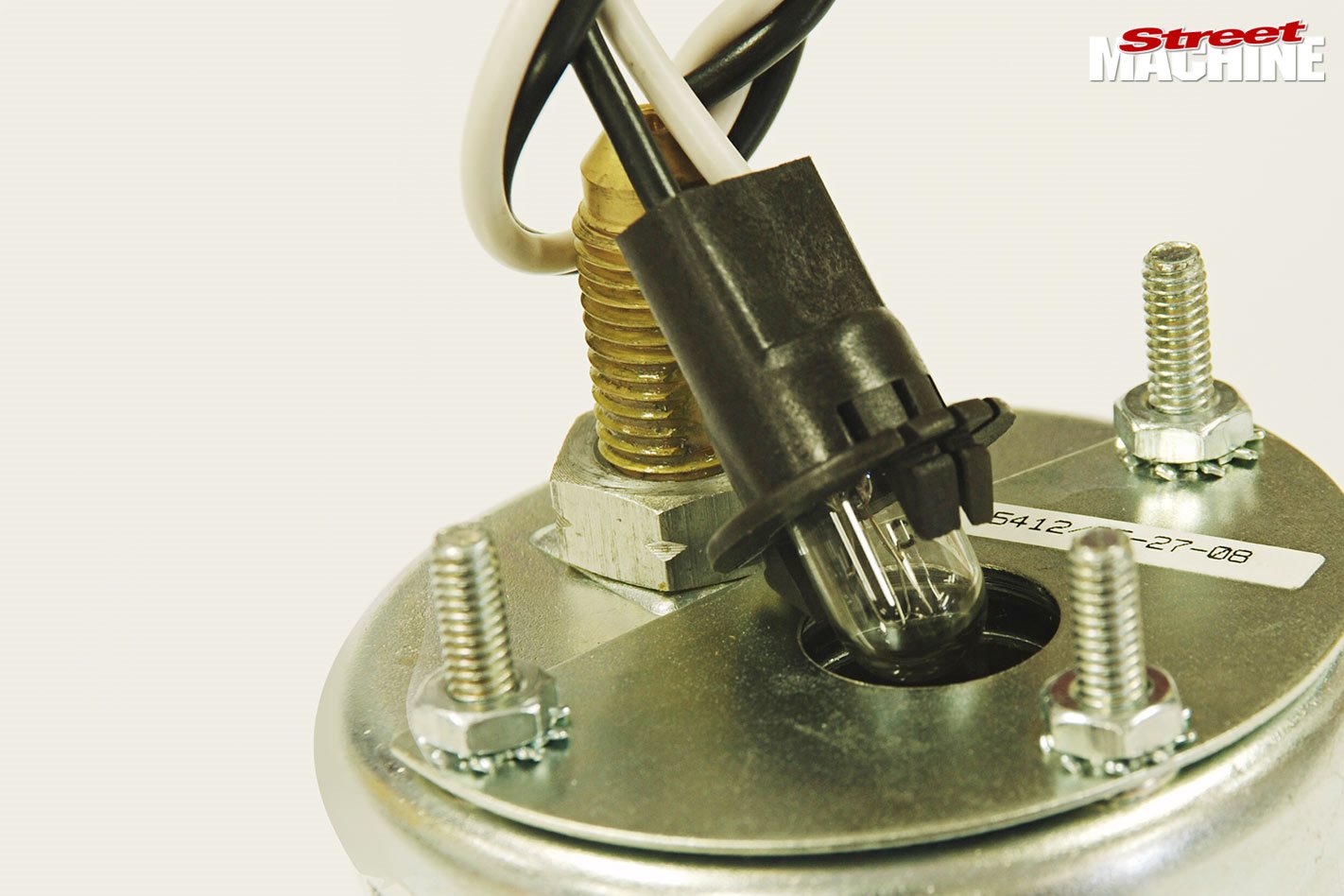 Different coloured globes or coloured ‘condoms’ that slip over standard globes are fitted to change the illumination colour. Many newer instruments use multi-coloured LEDs to do the job instead

Running overly rich or overly lean is detrimental to engine longevity and will need to be corrected. This makes an A/F gauge a useful tool for tuning or for verify an existing tune, as the air/fuel ratios of some dyno tunes have been known to produce results somewhat removed from on-road requirements. 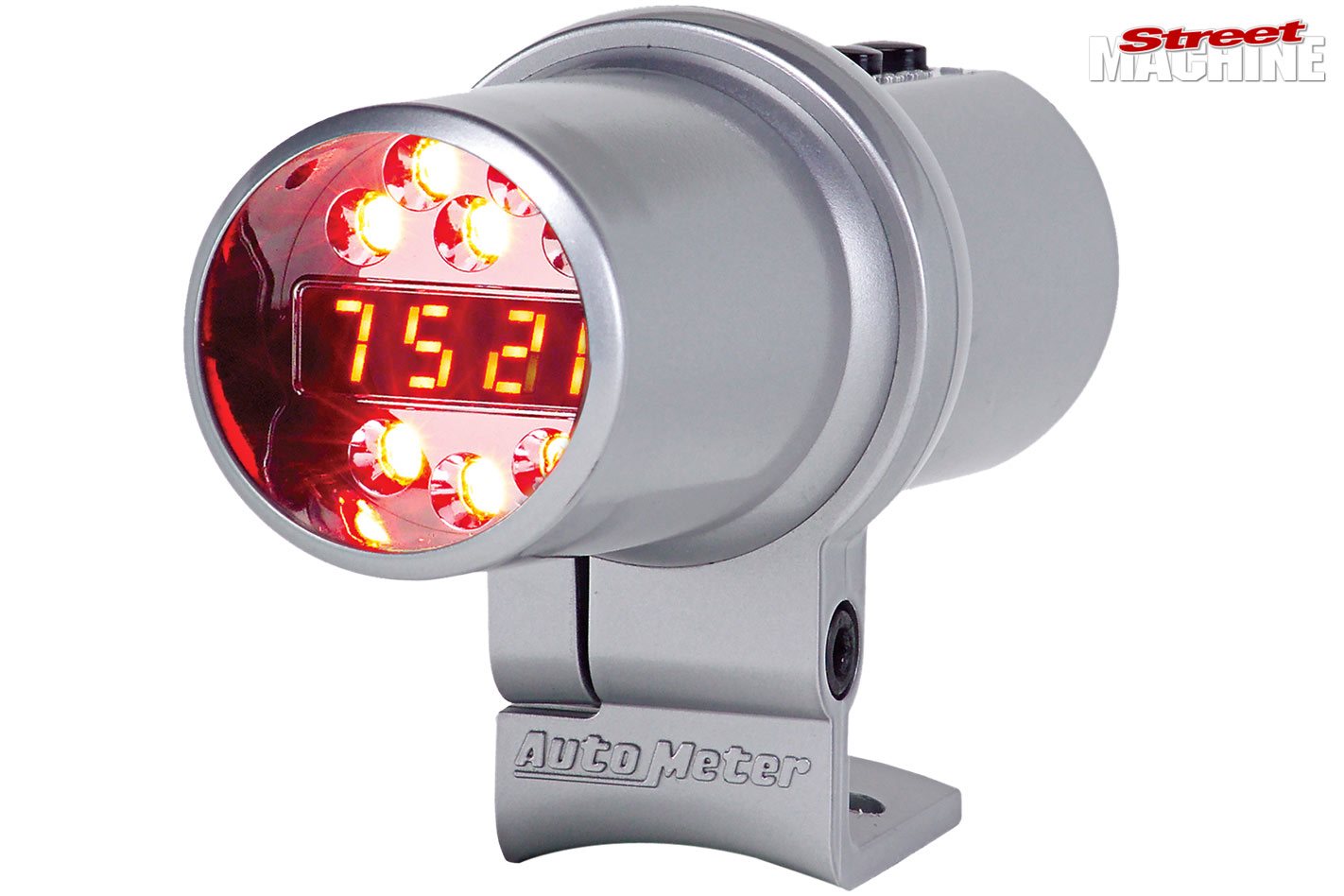 Programmable combination digital tachometers and shift-lights are compact and some models can activate ancillary equipment such as water sprays. Some have shift-points for four gears

These used to be popular when electrical systems used less current. The problem with an ammeter is that all of the current passing out of a charging or battery system has to go through it. In modern, high-current electrical systems they can be a weak link; a voltmeter is a better choice.

Severe over-boost can kill your engine, so if a wastegate or blow-off valve is sticking you need to know about it. In general terms, boost is boost and gauges differ in the range of their readings and their ability to read vacuum. Any boost gauge needs to accommodate your boost range and they’re available up to 100psi.

Brake pressure gauges have to deal with up to 2000psi. They’re highly specialised items and as such, you’ll only find them in the competition ranges from each company.

There have been cases where the driver hasn’t noticed a sudden loss of all coolant. But by the time your temp gauge registers a rise in temperature, the engine is thoroughly cooked. A coolant pressure gauge registers this problem as soon as it occurs. It also informs of leaks and other problems. 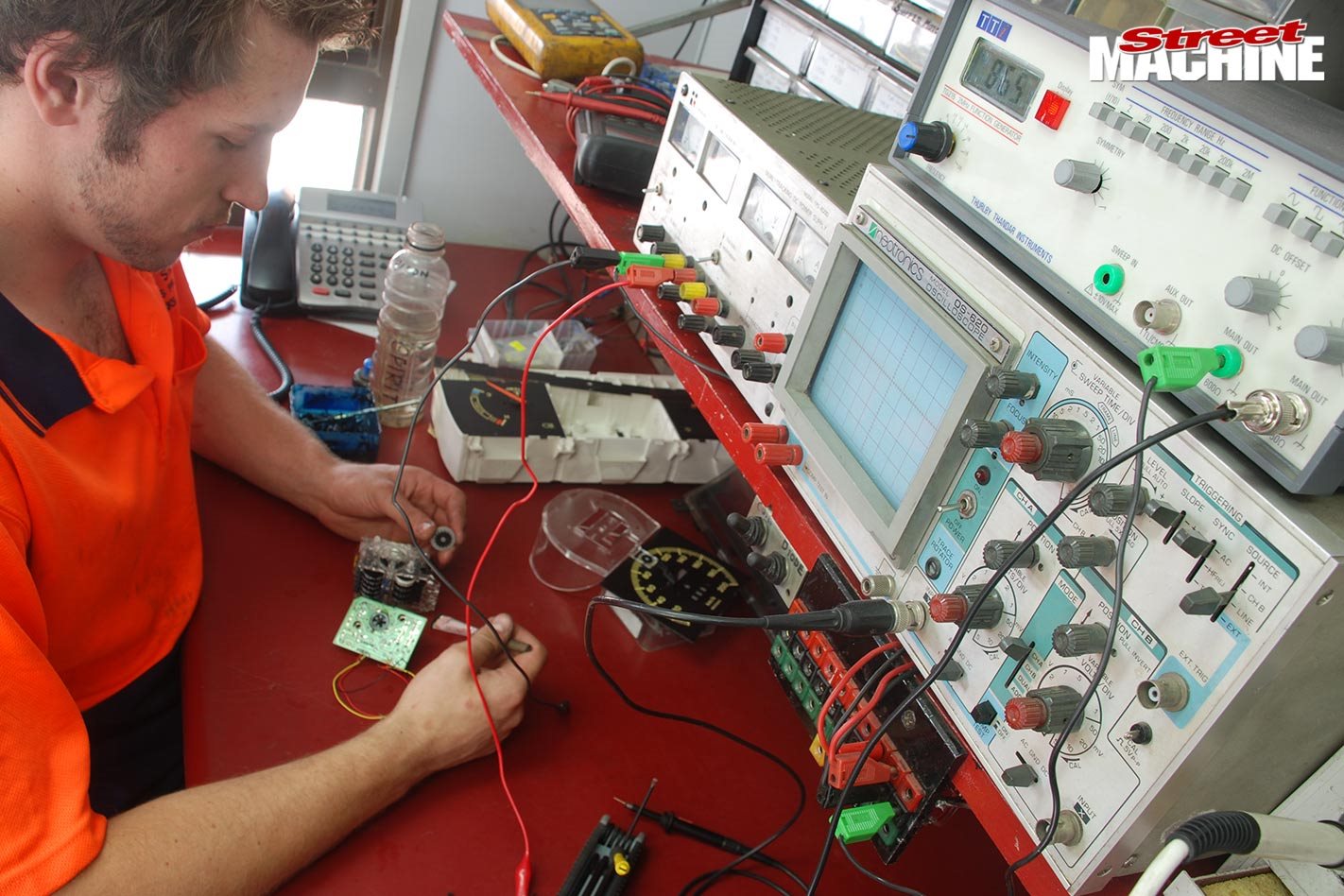 Lonsdale St Instrument Service (03 9706 5525) can repair, service and calibrate virtually any instrument. Often, just altering a resistor can bring a gauge into tolerance

In conjunction with a coolant pressure gauge, a temperature gauge can tell you most of what you’d want to know about your cooling system. Things like stuck thermostats, under-performing pumps and restrictions all become apparent, although a fair bit of detective work can be necessary to get the whole picture. Cooling systems are quite complex. 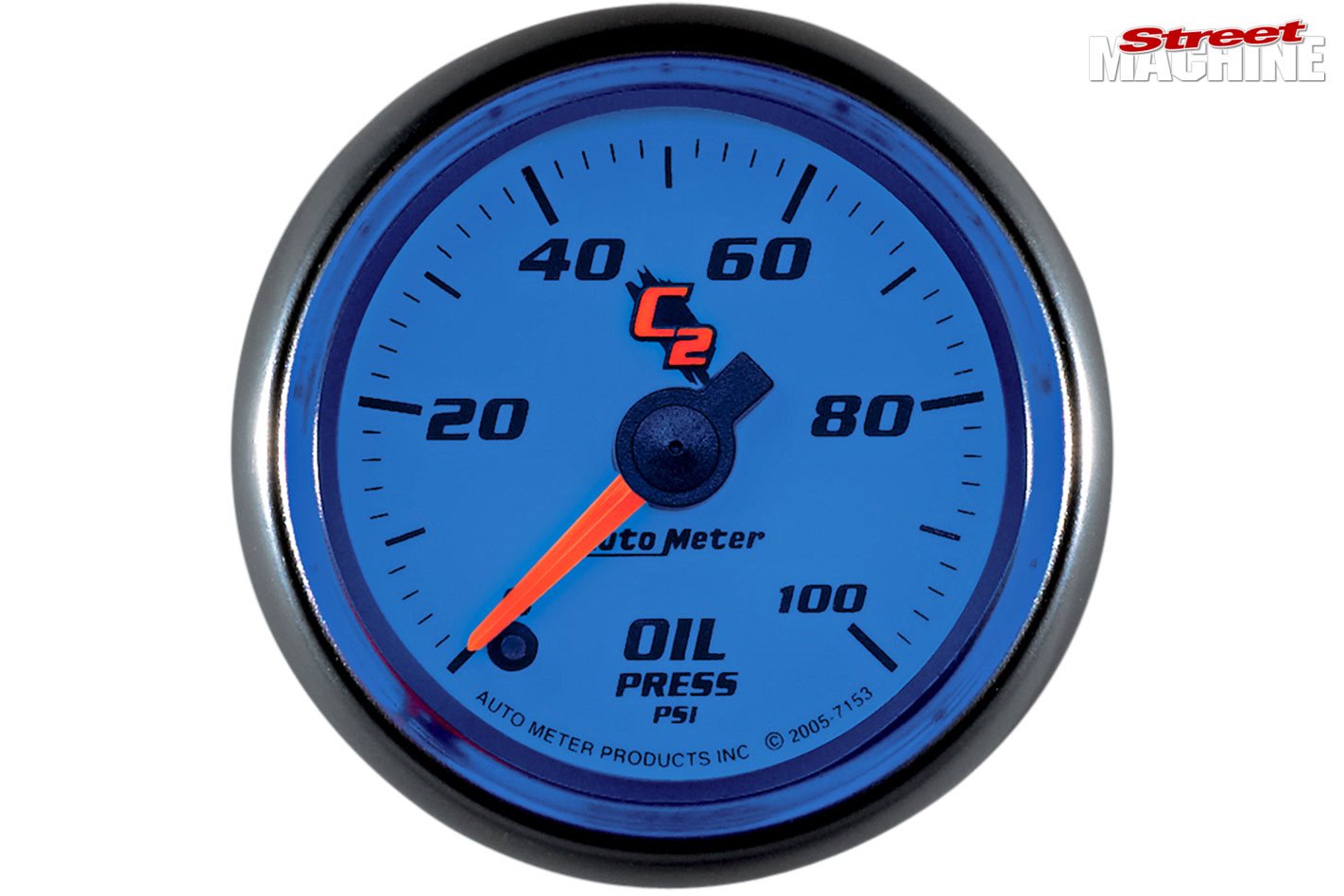 The use of variable-colour LEDs allows the illumination colour to change according to operating conditions. Auto Meter Nexus programmable 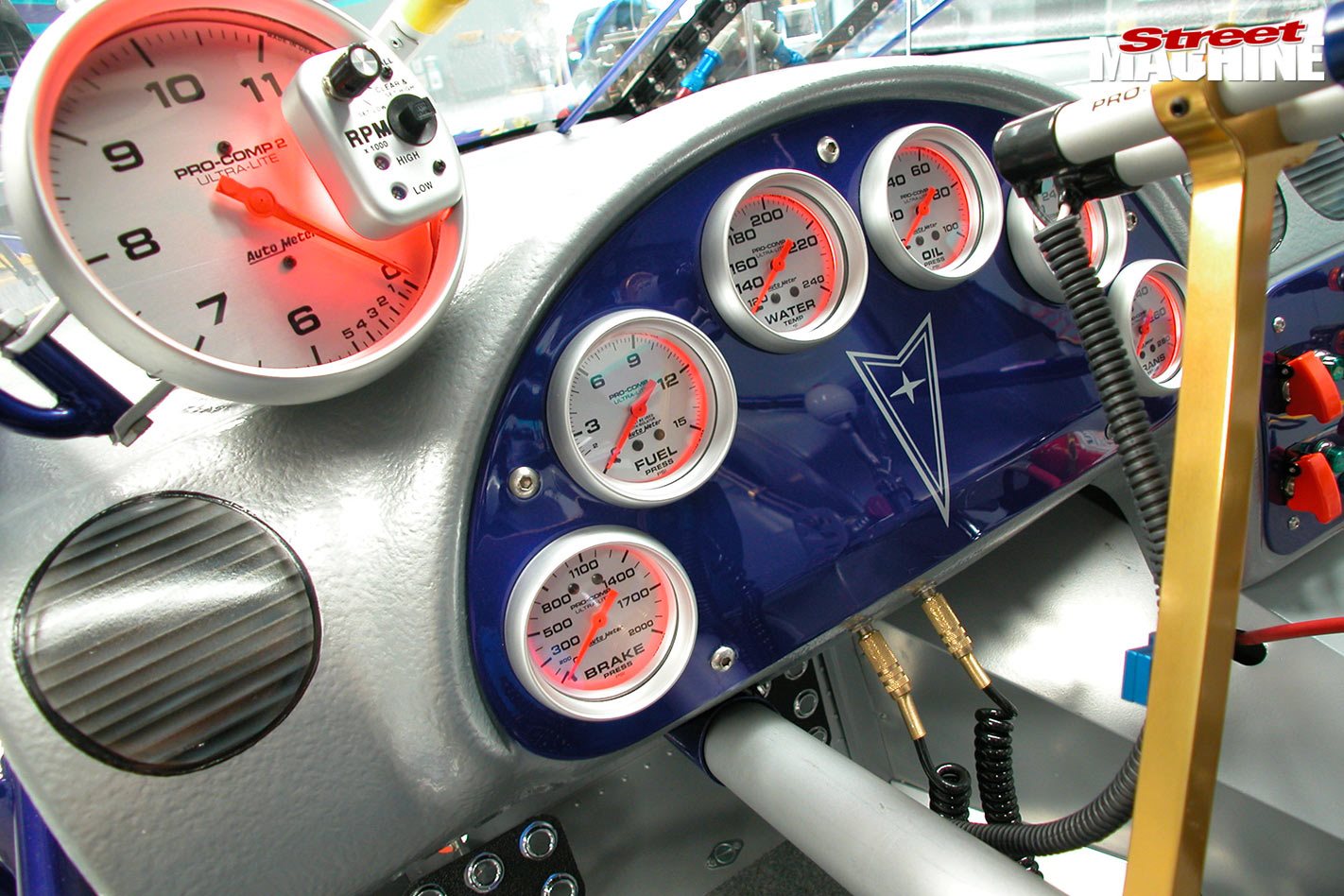 Fuel pressure has a great deal to do with getting your mixtures right, both in carburetted and EFI applications. A fuel pressure gauge can help you spot fuel pump and regulator problems. It can also help set adjustable regulators and will indicate if the system is coping with extra fuel demands, such as when nitrous kicks in.

Oil is in direct contact with your engine’s internals and has a cooling effect almost as important as its lubrication function. Increasing oil temperature usually indicates the need to shut down and investigate before expensive damage occurs. 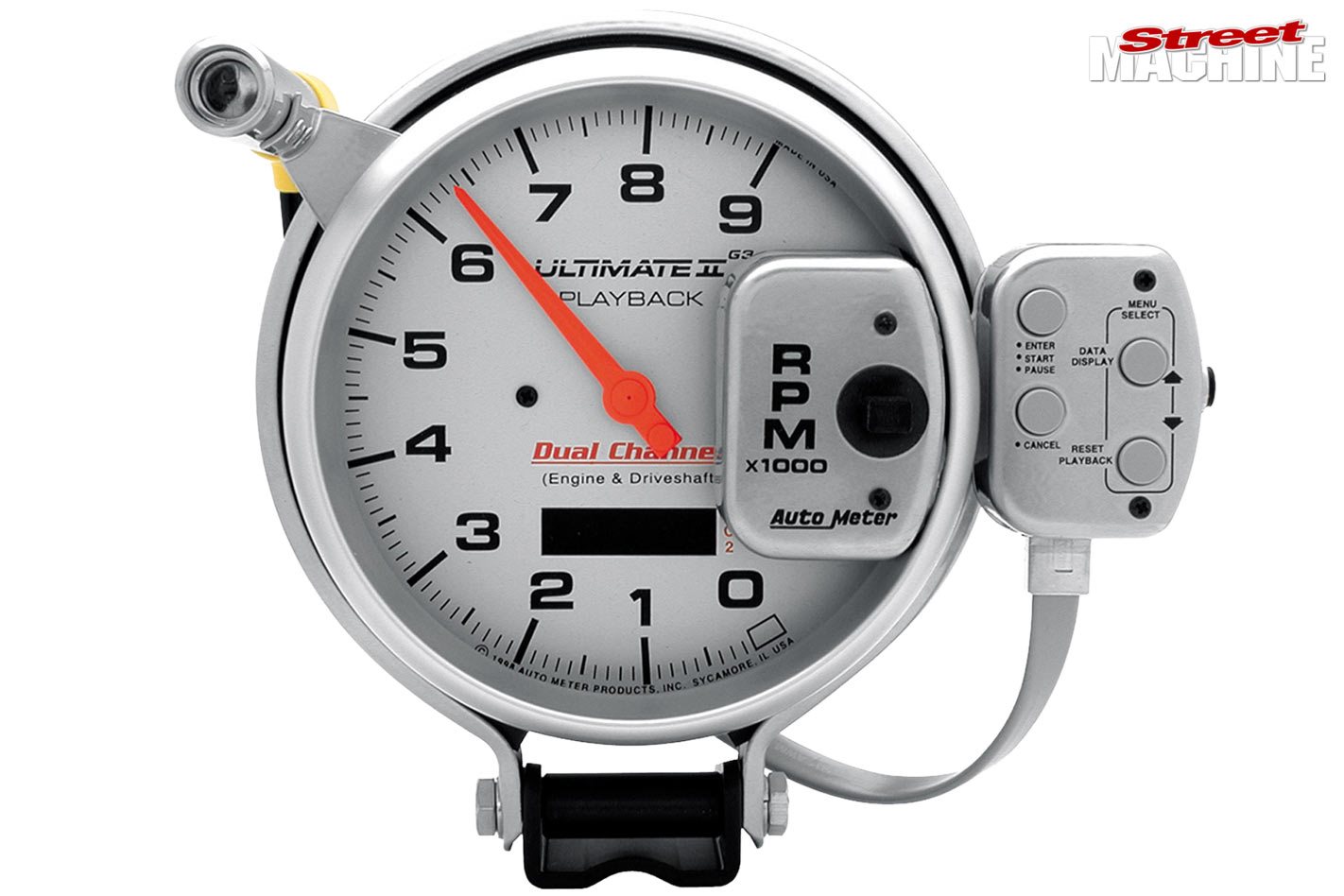 With a single-coil ignition system, the tacho will get its signal from coil negative. Things are bit more complicated with multi-coil set-ups. Here, specialised instructions are often required, which are generally available from the tacho retailer. If not, it’s a good idea to seek specialist help from a company like Lonsdale St Instrument Service. Martin, from Lonsdale St, says he often gets guys coming in who’ve destroyed brand new tachometers by connecting them incorrectly. If there aren’t specific instructions for your application, use a specialist — it’s cheaper in the long run.

Modern high-end tachometers do many more things than their predecessors. They’ll replay runs, log maximum revs, activate equipment and connect to computers. The latter function allows data from all runs to be stored. The Auto Meter Ultimate (shown) allows two runs to be overlaid on each other. The data is useful for determining split times and many other things. 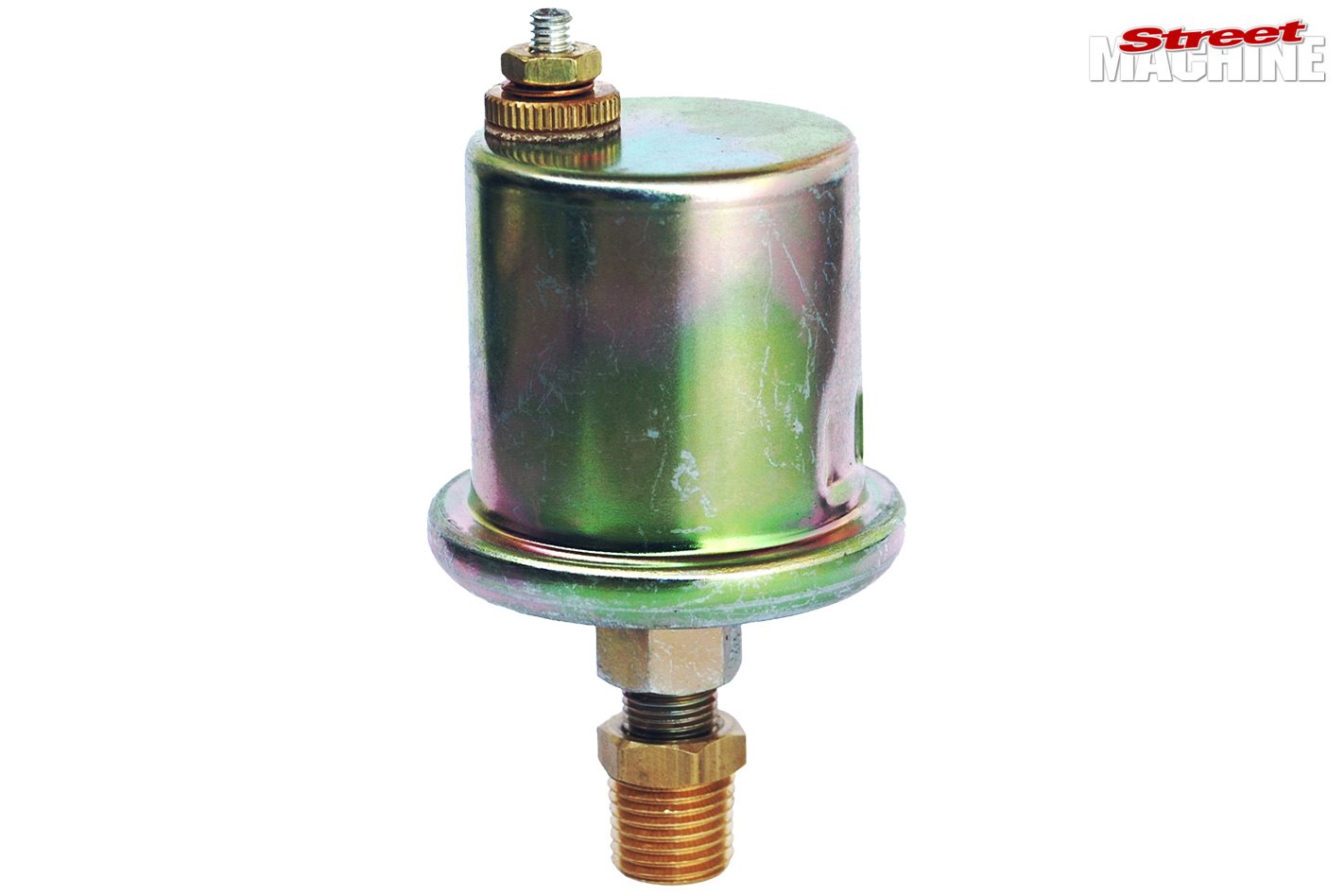 Electric gauges must match with the appropriate senders. Pressure senders, like this Auto Meter unit, use a diaphragm acting on a coil of wire to convert pressure changes into a varying electrical resistance, which the gauge reads 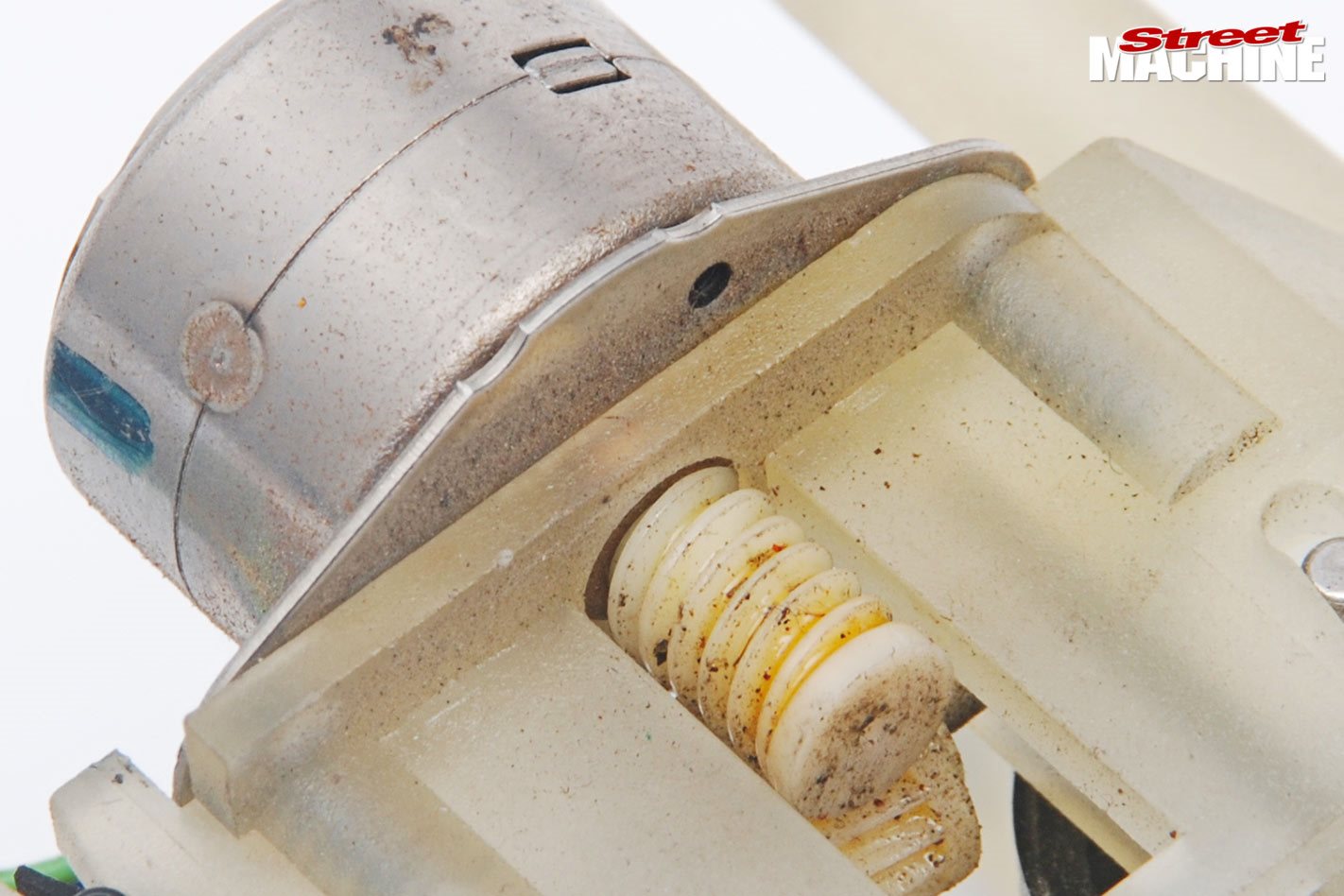 The 270deg-sweep electric gauges are driven by very accurate stepper motors. Rather than spinning freely, the armature in a stepper motor moves through discrete steps, allowing for precise needle movements

Which is best? They both work well enough, with needle-sweep being the primary difference. Needles on conventional electric gauges move side to side through 90 degrees, while the needles on mechanical gauges sweep through 270 degrees. This is important because the greater the length of the scale, the more accurately you’ll be able to assess small changes. 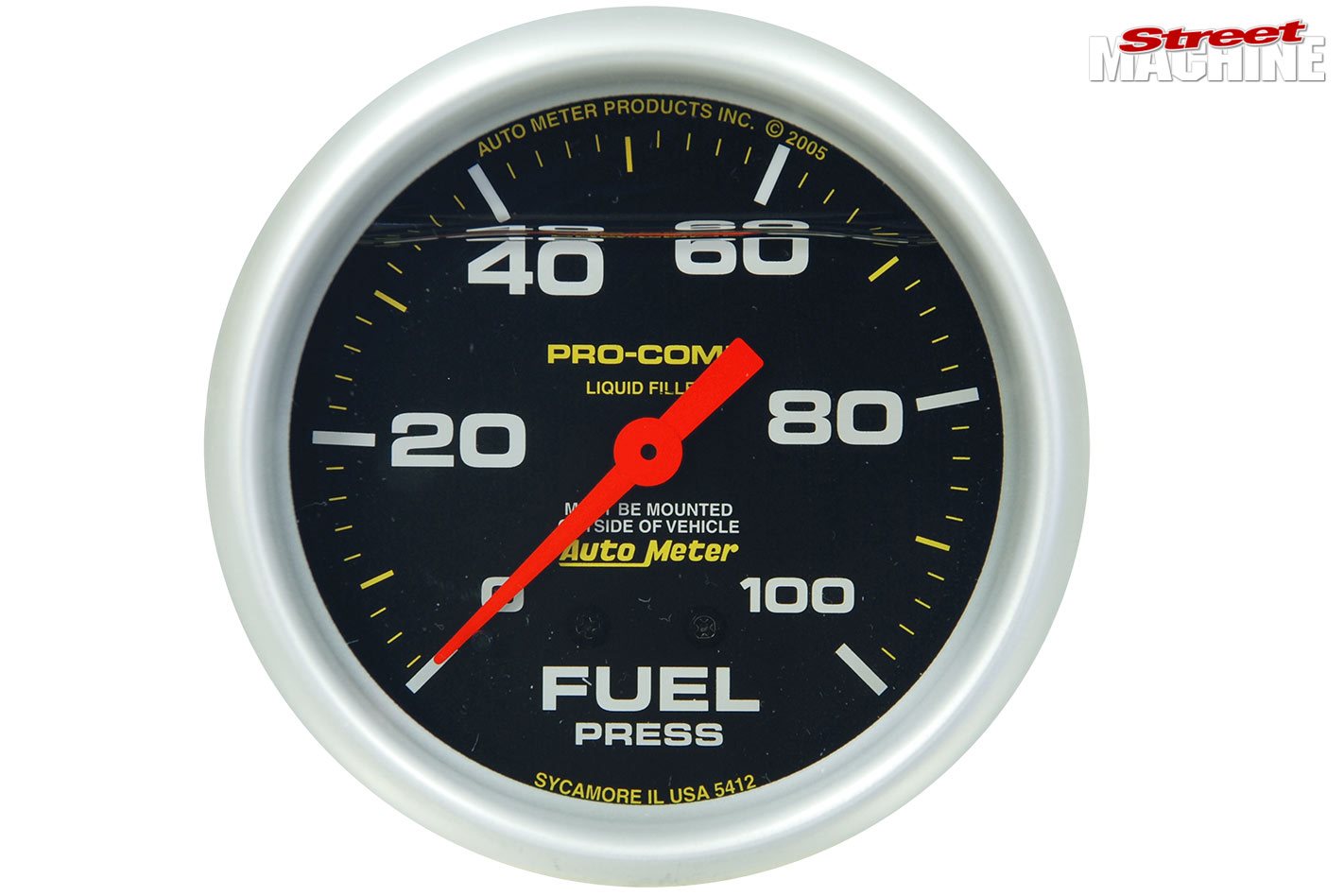 Note the liquid line running through the ‘40’ and ‘60’ markings. Being filled with liquid damps the needle’s movement,  which is ideal for high vibration environments, as in drag cars with plate-mounted motors

This is a typical mechanical temperature gauge. The probe and capillary line come fixed to the gauge, with the only electrical connection being for illumination

Matching the correct sender to an electric gauge is essential. Some come with the right sender but it’s an additional purchase with others. 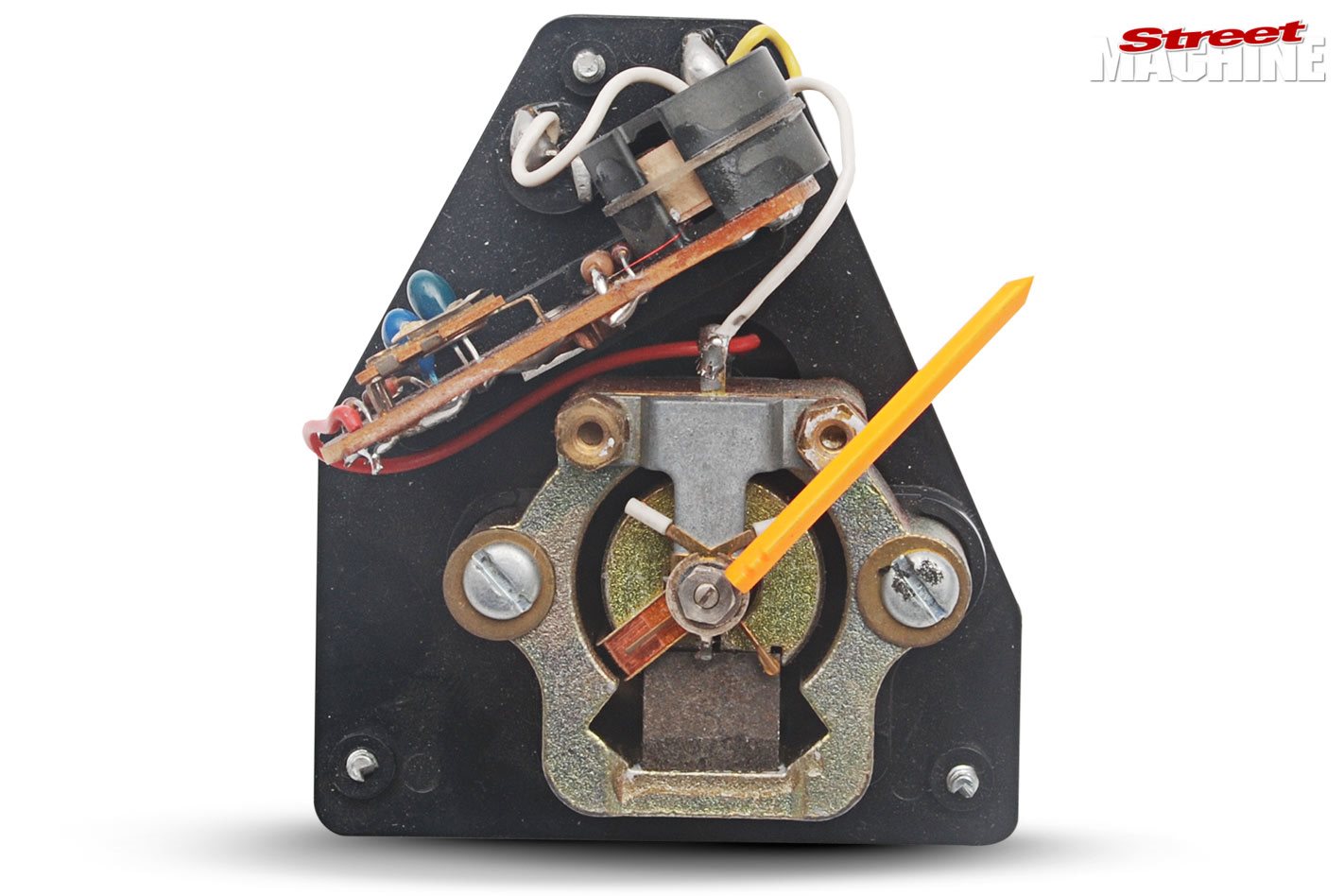 A moving coil mechanism from an electric gauge - current entering a coil creates an electromagnet, which interacts with a permanent magnet, making the needle move

Adequate engine oil pressure must be maintained to avoid destructive metal-to-metal contact. However, we’ve heard of blocked oil systems that showed perfectly satisfactory pressure but had severely restricted flow. Information from gauges isn’t absolute and has to be interpreted properly.

Apart from offering new instrument clusters, Dakota Digital can take your existing instrument bezel and fit a suite of digital instruments into it. This is an off-the-shelf unit designed for a ’65 Mustang. This, and some of its other bezels, may be retro-fitted to a range of vehicles

Read more: How to install a digital dash into a classic car

The selection of km/h units isn’t as great as mph models. That’s fine if you’re a drag racer but remaining street-legal means km/h. The excellent thing about modern aftermarket speedometers is that they can be accurately calibrated to suit any wheel, tyre, gearbox or diff gearing combination that you want your car to run. 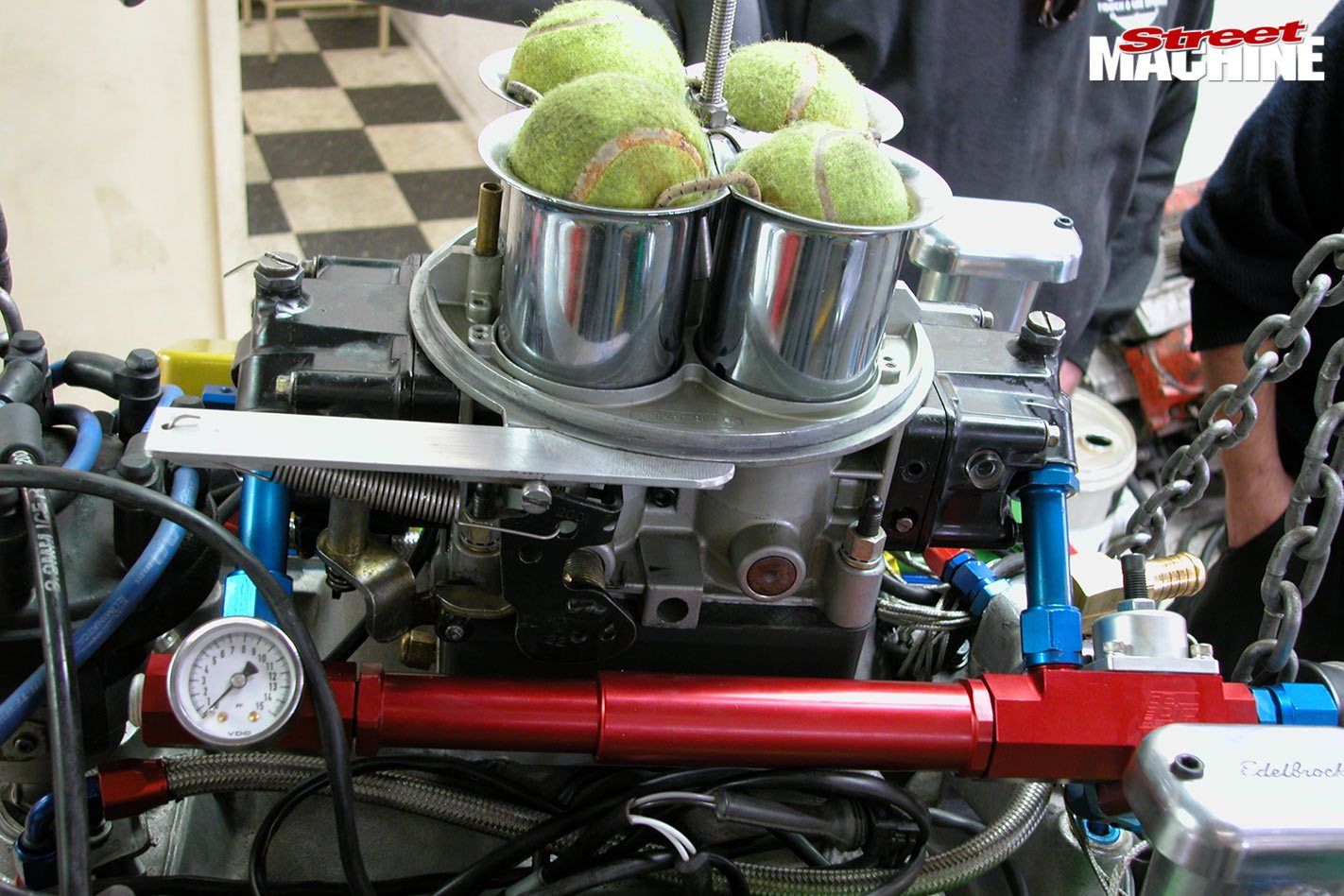 Not all gauges are meant for the driver. The fuel pressure gauge on this race engine has been mounted directly to the fuel rail and is used to monitor fuel pressure on start-up

You know you want one. A big one. Over-revving an engine is bad but if you truly need a big tacho, you probably have a rev-limiter anyway. Many people mount tachos on an angle so that at maximum revs, the needle is pointing directly upwards (12 o’clock); that way it’s easier to see peak revs. It’s a good trick to mount all your instruments like this, so anything off vertical stands out. Tachometers have always been pretty smart instruments but new models are available that do more than ever before.

Older bi-metal coil meters rely on heating coils of wire wrapped around bi-metallic strips which distort and mechanically push the needle. They have a sweep of 90 degrees

A vacuum gauge can provide penetrating insights about operating conditions in your engine, including the general state of things like valves, valve springs, manifold leaks, detonation, head gasket leaks, ignition, and carburettor problems. A vacuum gauge is one of the best gauges you can fit. 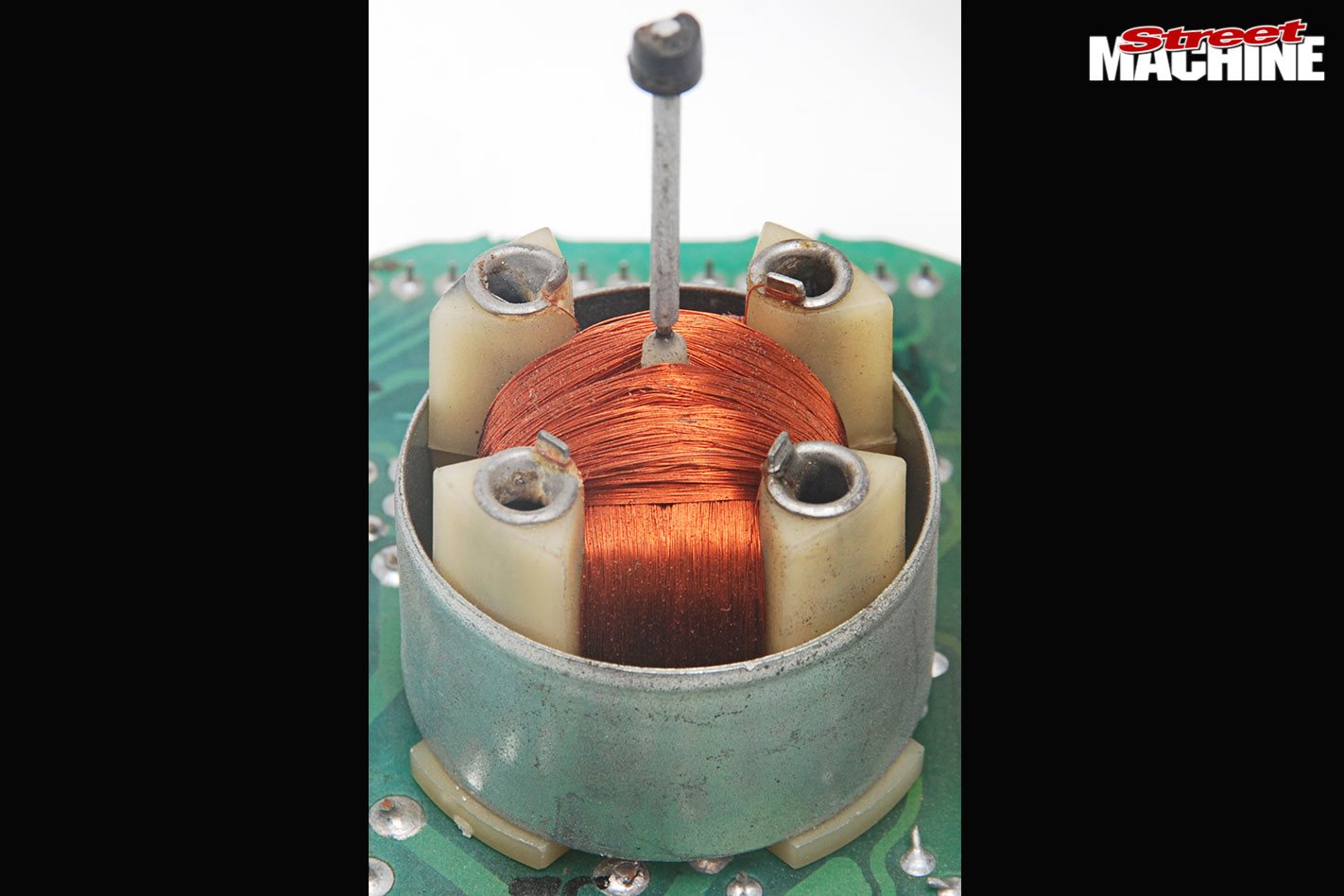 Newer, twin-coil mechanisms use one coil to drive the needle up the scale and an opposing coil to drive it down. They often don’t return to zero when the ignition is turned off

As we mentioned, these are the preferable means for assessing the state of your electrical system. Basically, if the meter reads lower than 11 volts or more than about 16 (depending on operating conditions) you have charging system problems. 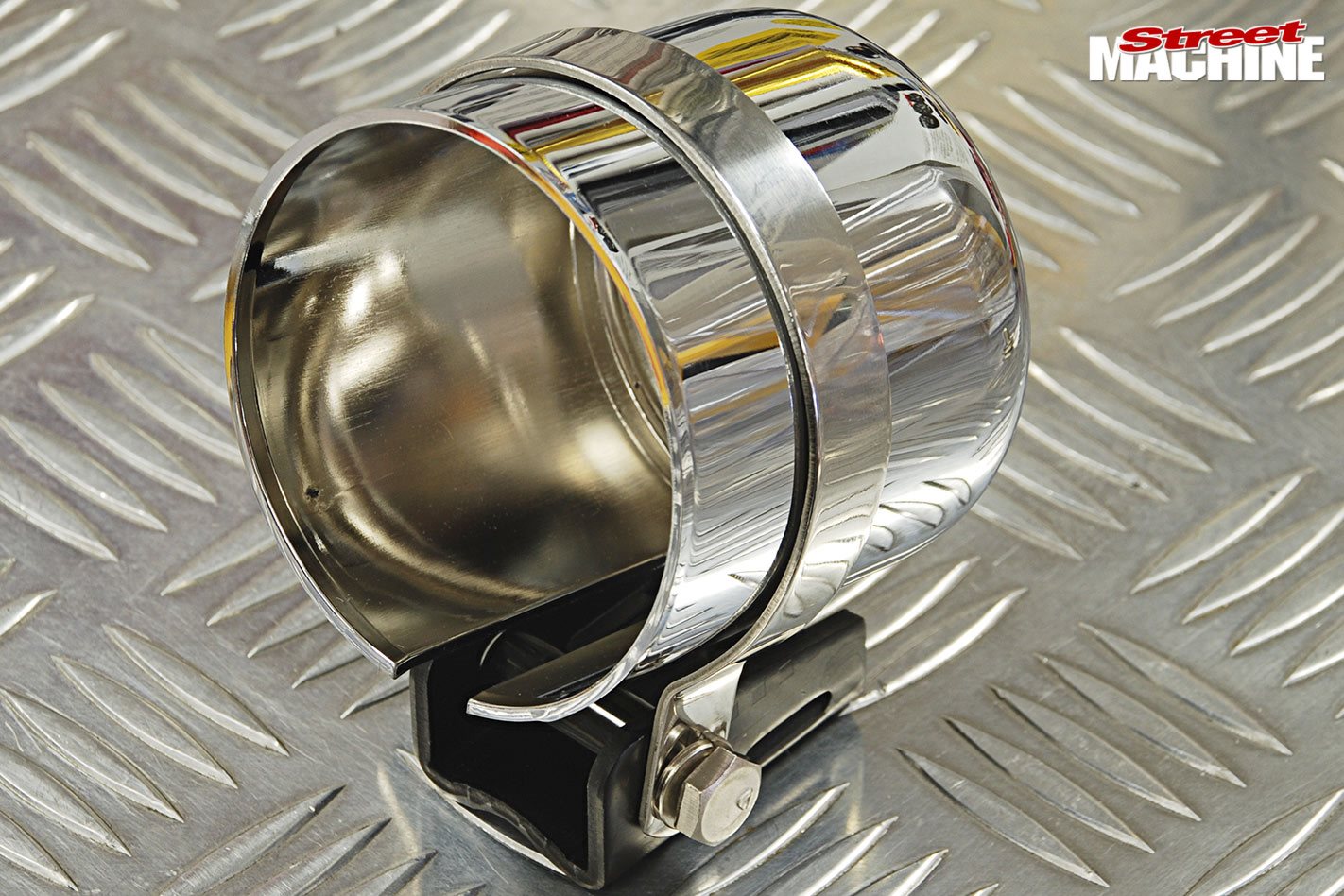 At a glance, fitting multiple electric gauges can seem daunting due to the sheer number of wires. However, things are not as complicated as they look. On each gauge, a couple of wires (power and earth) will be for illumination. Then there will be an earth connection for the gauge itself, plus one for switched 12V power (ignition) and one for the sender unit — five wires in total. Multiple gauges simply mean multiple sets of these five — all the earths can hook together; all the switched 12V inputs can hook together; all the illumination wires can hook together. That just leaves the individual sender wires to be routed out to the appropriate locations. Tachometers and speedometers are a bit more complicated but not that much.

This article is an introduction to gauges. All the retailers that advertise in SM have mountains of in-depth tech on their ranges, so give them a call. Here, we’ve focused on conventional gauges.