Three time Le Mans winner, former F1 driver and protégé of Sir Jackie Stewart talks about victory, and explains why Webber is among his favourites.

Allan McNish knows intimately the euphoric highs and crushing lows of the Le Mans 24 Hour. Three victories to his name – most recently in 2013 – and one almighty shunt in 2011 have dealt McNish the full gamut of emotions at the infamously unforgiving circuit. We sat down with the Scotsman to find out more.

Allan, what does it mean to win at Le Mans?

“The first time I won Le Mans I'd not got a clue what it meant - absolutely zero - until I stood up on that podium. On the grandstand, on the pit lane and on the track there's probably 50 or 60 thousand people there. You realise that it's a huge deal. Partly because suddenly the pressure is off. You've done it.

“I instantly had opportunities to do other things. There was a Formula One opportunity that came out of it within the space of about a month. Winning Le Mans puts you on a worldwide pedestal that you were not on before. That was the first time I realised the power of Le Mans in global motorsport.”

Are you the only driver to have driven for all three current works teams: Audi, Porsche and Toyota?

You're an Audi ambassador now, but is there a part of you that would smile to see the Toyota win after so many attempts and such heartbreak?

“Clearly we want to beat them. There's no question about that. But at the same time there are people in that Toyota garage who were in the program back then with me. The chief designer now was part of the program, and he was also one I worked with in the Formula One program all the way through. “The number one mechanic on car six was my number one mechanic. So there are a lot of people still in the garage and in the team that have been there before and who I've had a lot of times with in testing and racing. If we can't win it, it'd be nice to see it for them. I know how much it means to Toyota to win this race. They've been so close but ultimately they haven't achieved it. I'm sure they will at some point.

“With regard to Porsche it's a similar sort of thing. Last year when they won it was like a passing of a baton in a bizarre way, because I had won the previous one for them, which was 16 years before. There was a lot of me at Porsche because they were the ones that gave me the opportunity. They took a risk. Toyota took a risk in a way but they knew they were buying a Le Mans winner. Whereas with Porsche they basically took a risk on a young kid from Scotland.

“Now Audi I've been with for 16 years and they've brought me Le Mans wins, three American Le Mans series, four Sebrings, three American championships, four Petit Le Mans, and a world championship. So I suppose when I put all of that together, the success and everything else, time and memories, we want to beat the other two - like mad.”

From a driver’s perspective, why is Le Mans held in such high regard?

“It's the fastest circuit you go to. It's so arduous in terms of the actual track layout, the bumps, the cambers and the tramlines as you come down and into Mulsanne. The Porsche curves are some of the biggest balls corners in the world. It does demand a lot out of the driver mentally, physically and emotionally. Never mind the fact that there's just so much passion and emotion about the place because of the fans.

“Then you've got the tradition, like the parade on the Friday night, that's got to be done, and that's got to be preserved as well. It's all of these different facets that bring it together and just make it pretty special.

“Part of it is you don't appreciate it until you get here. You can't work it out. Nico Hulkenberg was perfect last year because he just had his jaw open.”

What changes have you seen with the recent growth of sports car racing?

“Now there's a lot of young drivers that are looking at it as their career choice, and not Formula One. Part of it is due to the fact the costs [in F1] are so prohibitive. They see the chances as basically 0.0001, and here [sports car racing] they see much more opportunity.

“The cars in terms of technology, in terms of the drivability and what the driver gets as enjoyment back out of it, without a doubt it's at that level. Drivers are looking at it as a different career choice and that's why you're seeing a lot of new, young drivers that are coming in here that – to be honest – if it were a different era, would've been sitting on a Formula One grid.” 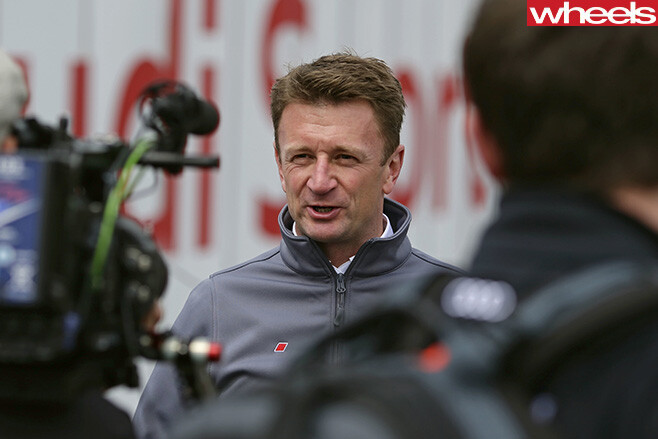 What are your favourite racetracks?

“Spa. No, actually, overall favourite racetrack is Suzuka. My three favourite tracks would be Spa, Suzuka and Mugello.”

What's your best moment as a driver?

“Winning my first race at Morecambe in the north of England in 1982 as a little 12 year old kid – with scrappy, big long hair, dodgy haircut, the whole thing – because that gave me confidence to believe that I could actually do something. I'd never won anything in my life before.

“I was driving a Lane Arrow; a Lane chassis and Hewland, the gearbox company, made a little 100cc engine. It was powder blue this thing, and I was basically wearing 30 kilos of lead to get myself up to the weight limit of 105kg for kart and driver.”

What was your biggest crash?

“In 32 years you have a few. Most painful one was breaking my leg in 1984 in a kart. I did a bit of a cartwheel through a fence trying to overtake the leader around the outside on the last corner. It didn't work.

“Biggest one in terms of severity and injury, that probably has to be Suzuka in Formula One, because after that one I had a big haematoma on my leg that took six months to go, and it was about a month before I was seeing straight again.”

How do you bounce back and manage to win, especially here at Le Mans, after an accident like yours?

“This place is tough because of the speed. I'll tell you something, where it was down at the esses there, if you go to the 2012 race, I overtook someone around the outside at that exact point. There was a little bit of a mental battle. We took second that year and we won the next year. Yes it is tough but you've got to push your way through it and that's the same with every accident. Every one that I ever had, whether they're just going off into the grass or something like that, you've just got to mentally put it behind you and move on.”

“I'm the son of a car dealer so we never really had cars, they could be gone the next day. The first car I bought was the first RS4 in 2000 and unfortunately I had to sell that because I was driving for a Japanese team who weren't very happy with it! And I'm so disappointed and annoyed I sold that bloody car! That nowadays would be stunning. I've had some corkers though. Favourite road car would be the [Audi] RS6 Plus - the V10. That was a hairy-chested car.”

What's the best team of drivers in the championship right now?

“I would say one of them is Audi #7 because they've been together for seven years now, and I see the way they interact. They work like an old married couple – but in a triumvirate.

“The other one is Mark [Webber]'s team. I know Timo Bernhard very well and Mark is now up to speed having come from Formula One. They've all got their jobs and roles and they don't cross over. Mark said something last year at the end of the season which I understand and agree with entirely: Timo is the gel. He bonds them together. [Dindo] Capello was that with Tom [Kristensen] and I. You always need that. You've got Brendon [Hartley] who's the one who can fire it in and deliver that lap for pole position and then you've got somebody with the experience to drag it through and that's Mark. That's the two teams for me that stand out right now.”