The 2005 Ford Falcon XR6 is the benchmark in a three-way comparison with Mitsubishi’s new do-or-die model and Holden’s dated sporty six.

If Mitsubishi’s great white hope really expects to make an impact in the hearts and minds of Aussie punters, the challenge starts here.

In a market that values sportiness, prestige and driving fun more than ever – attitudes backed by

Mitsubishi's own research through AustraliaScan – the all new 380 needs to make headway beyond the traditional weathershields and mudflaps brigade.

Automotive sex sells, and the outfit formerly known as the Cardigan Car Company wants a slice. 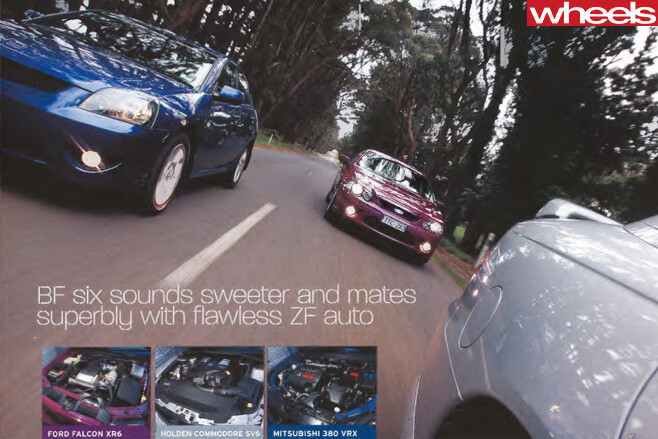 Mitsubishi wants the public to "think of [380] as having the style of the Mazda 6 coupled with the power and package size of a true large car".

Judging by the 6's predominantly high-end model mix, combined with the fact that more than 30 percent of Ford Falcons sold this year have worn an XR badge, the 380 needs to flex its muscles the most at its sports-focused VRX spec level.

And the success of Holden Commodore SV6 vindicates this: Sales of Holden's sporty six have jumped 40 percent this year, despite the shrinking market for big, six-cylinder sedans.

Last time Mitsubishi released an all-new contender in this category (the COTY-winning TE Magna, in 1996), the triple-diamond brand was on a high and sales were booming. Not any more. Today, 380 must do or die. First impressions don't bode well. Outwardly, the 380 VRX resembles Mitsubishi's take on a Camry. More dynamic-looking, certainly, but similar in its tall-boy stance, American-esque blandness and bulbous behind. A four-door coupe it most certainly is not. Gone is the elegance of the superseded Magna's turret and tapering tail design, along with its sleek frameless doors and mostly taut proportions.

Instead, the 380 appears fussy in parts (such as the uncomfortable intersection of lines around the A-pillar) and blandly conservative in general – not helped by Mitsubishi's laughable inclusion of mudflaps on our test VRX. So much for discarding the 'pensioner' stigma.

Holden's VZ Commodore might be old, but it remains a well-proportioned, handsome design.

And while the Plum-purple paintwork of our test BF Falcon definitely won't appeal to all tastes, its muscular form and masculine stance remain universally attractive and unisexually appealing.

Slide into the 380 driver's seat and initial disappointment prevails again. The steering wheel is unattractive and – like Magna – has a coarsely grained centre boss. The fabric effect imprint on the 380's dash-top surface is actually quite funky, but the plastic itself is hard and doesn't match any of the other equally hard interior plastics.

The speaker grilles at the base of the A-pillars and in the front doors look especially cheap, and there's a distinct lack of surprise-and-delight features.

Instead, the Mitsubishi startles with air vents that can't be closed off (simply re-directed), a steering wheel that adjusts for tilt but not reach, power-window buttons and column stalks shared with the lesser Lancer, and oddments storage that lacks the rubberised anti-slip mats of both its rivals.

The Commodore's controls are actually more tactile, clunky ventilation dials apart, while the Falcon interior is in another league again.

The Ford's classy ambience and impressive attention to detail make the Holden's cabin look dated and flair free, and the Mitsubishi's relatively over-styled, even juvenile.

Turn the VRX's ignition key, however, and the 380's positive aspects kick into life. While its tiller sits a little too close to the driver, and the wheel-spokes themselves are too intrusive, the thin leather rim is a vast improvement on the Magna's over-chubby item.

Significantly, it connects to a (hydraulic) power-steering system that impresses for both its accuracy and well-weighted progressiveness when turning away from straight-ahead. 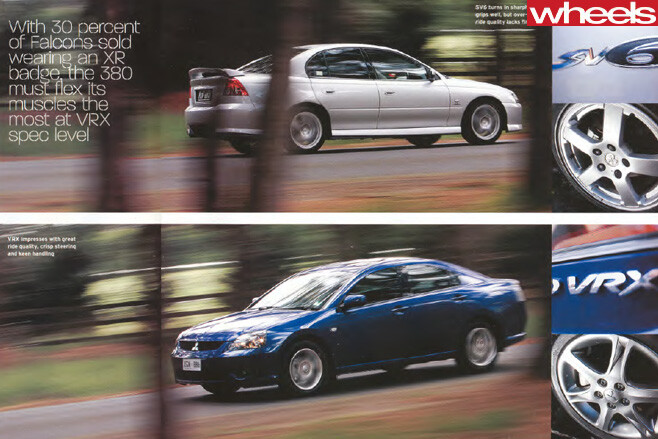 When applying lock, the steering's crisp feel and measured eagerness make the 380 a confidence-inspiring car to drive hard – dampened only moderately by audible rack rattle and quite sudden kickback over sharp ridges.

For such a big front-driver, the 380 displays excellent poise and even feels noticeably more wieldy than the decent-handling Magna. It feels neutrally balanced and has a satisfying amount of rear-end adjustment – particularly in tight, downhill corners- that dissolves understeer and makes the 1670kg VRX feel surprisingly agile.

The benefit of its substantial kerb weight is an extremely taut, solid-feeling body that seems perfectly suited to the punishment that Aussie roads dish out.

Best of all, though, are the Mitsubishi's ride quality and refinement. Despite the VRX's sports suspension, its ride is supple yet disciplined. For a sporty sedan, the VRX is wonderfully comfortable and relaxing – a feeling heightened by its excellent, deeply bolstered seats and generally hushed road noise.

There is some coarse-surface road rumble, as well as some wind rustle from the trailing edge of the front doorframes, but the 380 remains competitive with the class-best BF Falcon, and definitely ahead of the noisy Commodore. It should serve as a textbook lesson for Toyota in how to tune next year's all-new Camry and Avalon.

Suspension has remained virtually unchanged in the model update, meaning the XR6 still delivers the best compromise between control and comfort, but the BF's extensive NVH improvements and structural upgrades mean it's noticeably quieter than before, and roughly on par with the 380 – including the wind rustle from A-pillars and wing mirrors. The Falcon has a firmer ride than the 380, but it's impressively damped, has better body control, and is far more polished than the stiff Commodore.

The XR6 turns into corners with a zeal bordering on aggression, and with great balance, but the Ford's steering – while offering good feel through its perforated-leather wheel – is too sensitive-in its off-centre response.

If that last comment puts a smile on the face of Holden fans, the next few may not.

In the company of the newborn 380 and still· fresh-faced Falcon, the VZ Commodore SV6 is showing its wrinkles. While it continues to be a rapid and still surprisingly sharp-handling device, its lack of finesse is evident in almost every department.

The SV6 turns in quickly and with very little body roll, but the steering exhibits a curious combination of vagueness and sharpness – delivering minimal feel when initially applying lock, before suddenly darting in the intended direction, without necessarily signalling its intentions.

It certainly grips well and can be very quick on a twisty road, but its general balance leans towards mild yet persistent understeer, with its back end feeling inert in corners unless judiciously provoked into breaking traction (which is only possible at low speeds).

Compared with its rivals, the SV6 feels two-dimensional, a feeling not helped by a ride quality that, while never harsh, is always busy. It's not quiet, either, particularly on coarse surfaces.

Commodore's highly effective, but rarely subdued, 190kW/340Nm 3.6 exacerbates the noise issues. While it has all the desired traits of strong torque, impressive response, superb top-end grunt (right to 6800rpm), admirable fuel efficiency, and a love for revs, the Commodore's ageing structure and inadequate noise suppression means you can hear the Aussie-built V6 thrashing away.

The SV6's French-built GM five-speed auto is generally smooth and intuitive, but it can be caught out. For instance, spend a few minutes caning the SV6 hard, and the transmission dithers if you get out of the throttle quickly. It responds by holding the lower gear seconds longer than you're really comfortable with, before lurching uncouthly into a taller ratio.

The BF Falcon's updated 190kW/383Nm 4.0-litre straight-six sounds far more sophisticated than the HFV6, no doubt helped by the excellent new ZF six-speed auto and extensive NVH improvements. There's still a hint of drone to the BF's engine note, but the roar of the BA's donk from 4000-

6000rpm has disappeared. Instead, the BF six feels smoother, sounds sweeter and mates superbly with the virtually flawless (optional) transmission.

Both performance and fuel economy show worthwhile improvement over the four-speed 182kW/380Nm BA XR6 auto, but the real pleasure here is how the new Falcon operates – swiftly yet suavely.

With just 700km under its belt when we collected it, the Mitsubishi's 175kW/343Nm 3.8-litre V6 felt quite tight, and posted significantly slower performance times than last month's launch cars. But after another 800km, the 380's V6 freed up nicely, proving smooth and strong across most of its rev range, with fuel economy steadily improving to match the SV6 over this test's final leg.

There's a distinct similarity to Magna's 3.5-litre V6 in terms of aural quality, but the new 3.8 adds a spicy exhaust crackle on overrun that a manual 'box should only accentuate.

Inside, the V6 sounds mildly edgy, though it now hits cutout at 6200rpm, not 6800rpm as did Magna's equally likeable, and similarly effective, 3.5.

The 380 makes its most substantial gains on Magna in cabin space, however. It's now almost as roomy as a Falcon, with superior rear-seat comfort to Commodore. All up, rear seat accommodation falls just shy of Falcon's excellent fare.

With optional sunroof, 380's rear headroom is borderline tight for six-footers, but its fine up front, and both sports bucket seats are enveloping yet roomy enough for larger bods.

Curiously, both front doors feature proper grabs, but no overhead handles, while the situation is reversed in the rear. The driving position is very good, and even more so with the seats' optional electric adjustment.

Falcon appears to offer the largest amount of useable interior space, but the effect is soured somewhat by its electric height/tilt adjustable driver's seat being mounted too high. The rest of its classy interior is difficult to fault, though, particularly BF's new door pulls, slick console and sporty metal pedals.

Commodore's cabin can't meet the challenge, with door trims, rear seat, lower dash, and front seatbacks that are all carry-over items from 1997's VT. Thankfully, the SV6's front seats deliver impressive support for both corners and big distances, and its driving position suits the widest range of body shapes.

If sticking things into your boot is almost as important as sticking your boot into the throttle, Falcon claims a big win for practicality with its 504-litre capacity.

What this test exposes the most, however, is just how dated Holden's VZ Commodore SV6 now feels. With the BF XR6's many and varied improvements, the SV6 simply can't compete.

It still looks good, goes hard, and remains likeable in a brash kind of way, but the Holden feels at least a generation behind. Which it is.

The 380 is impressive in all the areas we expected – seating, space, refinement, body strength, dynamics, and drivetrain smoothness.

And these are all, not coincidentally, key areas focused on by Mitsubishi Australia's engineers in transforming the US Galant. Unfortunately, though, the 380's sense of engineering quality is dragged down by its downmarket cabin plastics, a lack of attention to interior detail, and the exterior's visual blandness. In the areas that count, it's a great car for Australia, but where's the flair?

Ford's BF Falcon XR6 is a significantly more polished example of the car that won our 2002 Car of the Year. As such, the fact it wins this comparison should be no great surprise. What did surprise us, though, was the margin of its victory.

The Broadmeadows-built sedan offers unbelievable sophistication for the money – particularly in its interior comfort, fabulous auto transmission and world-class suspension.

In fact, so good is the Ford Falcon BF XR6, it warrants genuine comparison with European sedans worth double, even triple, its price.