AUSTRALIA'S Ford-versus-Holden battleground is vast, with trails of red (and blue) blood spattered across the decades, from Mount Panorama to the front bar of your local pub. And every update from either brand is the signal for another round of hostilities.

This time it's HSV's Z Series Clubsport R8 against FPV's new BF GT. It's the arrival of the latter's optional and supremely sophisticated ZF 6HP26 six-speed transmission that prompts a comparison with the four-speed 4L65E-equipped R8 to see which shapes up as the sharpest shooter of Aussie automatic weapons. For the Reds and the Blues among us, these are aspirational models.

HSV and FPV push cars with humble origins to elevated levels of performance, an achievement that  the loyal tribes of followers hope their own lives will emulate. And there's nothing wrong with that. 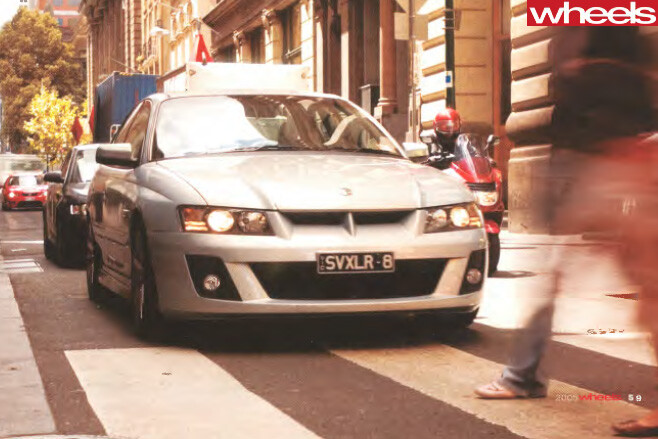 The cars look ready for this contest, the R8 with its evil double-nostril grille, gaping lower intake, side skirts and sensuous thin-spoke alloys. The optionally striped GT is more gaudily decorated, sitting on new 19-inch wheels and flaunting a more aggressive front bumper. The GT gets a hole-shot right off the showroom floor, starting at about $5500 cheaper than the $71,140 R8 even with a few options, including the extra $1250 the ZF auto commands over the standard Tremec T56 six-speed manual. (Previously, the Ion four-speed auto was a no-cost option.) HSV might argue this is a mismatch, and that the $70,410 GT-P is the R8's most logical opposition. But the tale of the tape shows little difference between the two Fords in technical specification apart from the GT-P's new six-pot front and four-pot rear Brembo brake set-up supplanting the GT's four-piston/single-piston arrangement.

Otherwise they get the same 290kW long-stroke V8 (a close relation of the XR8 engine tested by Micmac a few pages back), the same suspension tune and - of course - the same ZF transmission.

Either way, both FPV GT and GT-P face a formidable foe in the R8, with its all-aluminium 297kW 6.0-litre V8 (a vastly improved relation of the SSZ's Gen III in the same previous comparo) and standard-fitment performance suspension that features increased-rate progressive springs and recalibrated dampers. The 4L65E four-speed auto transmission is a no-cost option over the M12 Tremec-equipped manual version of the R8. 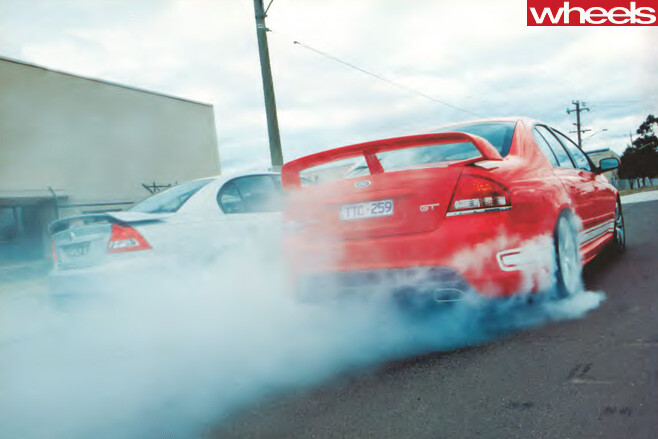 The R8's leather-trimmed and power-adjustable sports seats give it an initial equipment advantage, but the FPV parries with dual climate control and a classier interior feel. One surprising omission from the GT is stability control, even though the cheaper XR8 now gets it standard. FPV blames the development costs of a unique software calibration and the need to spend the money elsewhere  - apparently customer research showed Brembos as standard issue were a higher priority. No doubt the XR8's brake upgrade also drove FPV in that direction, along with the fact the HSVs -like lesser Holdens with V8 engines - don't yet have stability control.

But from specs chart to drag-strip time slips, the contest suddenly becomes one-sided. If straight-line performance is your thing, then the R8 is a killer. With never less than 87 percent of the 530Nm torque peak available between 1600rpm and 6000rpm, R8's LS2 bellows off the bottom, rips through the midrange and keeps roaring onwards and upwards to its 6800rpm cut-out, giving lustily and eagerly as the scenery vaporises and the GT disappears in the rear view.

It's at the strip where GM's old truck transmission is least disadvantaged. For Z Series, the Turbo Hydramatic 4L65E is in the same tune as the Aussie-built Pontiac GTO (aka Holden Monaro), and the Yanks demand max straight-line performance at all costs. So that means it works with a shorter 3.46:1 diff ratio (from 3.27:1) to boost initial response, while the shot-peened gearset in the limited-slip differential and thickened tail shafts are better able to handle the strain of channelling all that muscle.

By contrast, the Vbox performance testing equipment exposes the FPV's comparative shortfall of pace. The Barra 290 will push the GT below 6.4sec and 14.4, but progress becomes harder from there. The Ford engine doesn't have either the same depth of strength or height of rev ceiling of the LS2, besides which the GT hauls an extra 164kg.

This 600Nm torque-limited version of the ZF (with extra plates in both clutch packs) has no problem coping with the engine's outputs, but it is hindered by a much taller final-drive ratio that surely negates any straight-line advantage its smarts might deliver compared to the 4L65E. This is despite FPV recalibrating the gearchanges to yield the most aggressive upchange of any Ford Falcon.

The GT races back into contention once some bends are thrown into the contest. The R8's engine continues to shine, but the transmission is no longer such a willing helper. 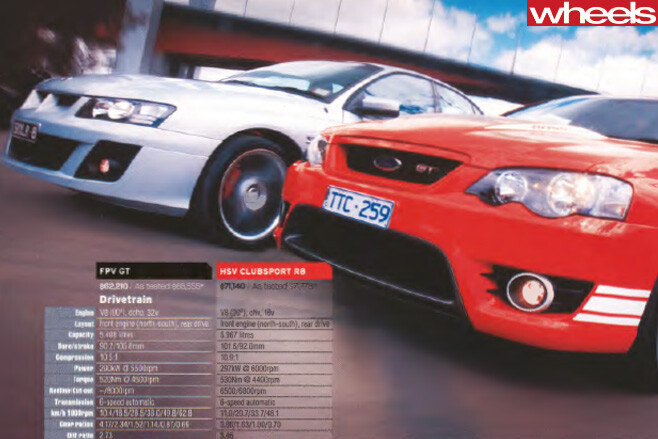 Lift off and - bang - that'll be an upchange. Gas it and – shudder - that must be the kickdown from third to second. All this accompanied by dramatic changes in engine note that betray the yawning chasms between gears.

The best way to fight this is to pull the shifter manually back to third on windier roads, but the 4L65E still feels old and tired. In stark contrast, the ZF is younger, faster, smoother and much smarter, progressively learning from inputs and getting sharper in the process. Out on flowing and open roads, though, the R8's transmission is at its least intrusive, and the HSV is capable of generating awesome pace. There are moments – hunkering down into a big sweeping turn, surrounded by a swelling exhaust beat - when you want to be nowhere else than grasping that thin steering wheel while seated behind one of the best engines to ever grace a locally built V8 sports sedan.

But as the going gets tighter and rougher, the R8 displays more evidence of age. The combination of struts, semi-trailing arms and loose body just can't react as quickly as the engine. The front will push, the steering becomes inconsistent and inaccurate, and bodyroll becomes intrusive. It feels like the Yokohama Advans are doing more than their fair share to keep the R8 off the Armco, while the chassis tune stamps things so firmly that corrugations bang through the rear suspension, rattling the body. It makes progress a little tense and twitchy, and you're left making a series of small corrections, unsure exactly what comes next.

The GT is more the new-age warrior. It's quieter, thanks to the new dual-entry ram air intake and dual exhaust needed for tougher drive-by noise levels introduced from 1 January, 2006. Nowadays, that means you'll have to flatten the throttle to get some aural satisfaction. But the NVH package Ford has introduced across the BF Falcon range also has a role to play in achieving such a calm cabin. Rumble from the low-profile Dunlop SP9000s is now the major intrusion.

It's certainly quiet, but it also carries a big stick. The GT is a superb high-speed mover, living up to its grand touring tag brilliantly. The ZF is a fine component in an impressive combination, providing the right gear at the right time, with almost clairvoyant perception. Then there's the wonderfully cogent ride and handling compromise brought on by the beautifully tuned double A-arm front and control-blade rear suspension. It's capable of calming roads that fluster the R8, while keeping the car's manners assured and stance flat.

But the GT isn't entirely happy in the clinches either. That extra flab, some of it located high and forward in the engine bay, tells against it, with understeer eventually showing up. And the less flexible engine means you'll be hammering the throttle hard and often to extract its best. The ZF does a fine job in this situation in performance mode, but to gain true control you'll want to slide the lever left and start changing manually.

As confidence-inspiring as the GT is, a touch more weighting and feedback from the steering would help. The brake pedal is about as sensitive as Judge Judy, but the Brembos do keep doing the job impressively. The RS's brakes offered similarly consistent performance, but with a little more initial pedal sink, plus a tendency to make more noise than an AC/DC concert.

Through all this, there's one thing these two were united on, and that's fuel consumption. Both prefer PULP and both drink plenty under duress, the HSV averaging 16.L/100km (against an ADR81 sticker number of 13.3L/100km) during our test loop that included everything from freeways to suburbs to tight winding backroads. The GT was a tad thirstier at 16.5L/100km (ADR81 sticker 15.0L/100km) despite its unarguably more efficient transmission. That's a reflection of how hard the engine has to be pushed to extract ultimate performance.

Despite that, there's no doubt the FPV is better. Both cars fairly claim punishing blows, but the decision on points must go to the FPV. HSV's Z Series is a great engine surrounded by an ageing package, so it's no surprise the GT feels at least one generation ahead in its handling and refinement. But how much better would it be if the FPV had an engine like the LS2 mated to its sweet ZF auto, lost some flab and was given a shorter final drive?

The Holden's clear performance advantage will be some consolation to the brand's many followers. But the Ford proves that on the road, as well as the bloodied battleground, raw firepower isn't always the deciding factor.