MIKE SIMCOE is at the wheel, cruising Woodward Avenue in the last Chevrolet SS on the Tuesday evening before Saturday’s Woodward Dream Cruise proper.

I’m absorbing car-styling wisdom from a master, a precise, honest tutorial that’s gold for anyone, like me, who loves Detroit cars from the 1950s and 1960s.

The SS, the badge-engineered, Chevrolet version of the VF Commodore SS-V Redline, is an appropriate stand-in for the 1959 FC Holden Special I’d hoped to use for this story. After now-executive vice president of global product development at GM, Mark Reuss returned to Detroit in 2009 following his stint as Holden CEO, he brought back an FC sedan. The FC now lives at the GM Heritage Center. 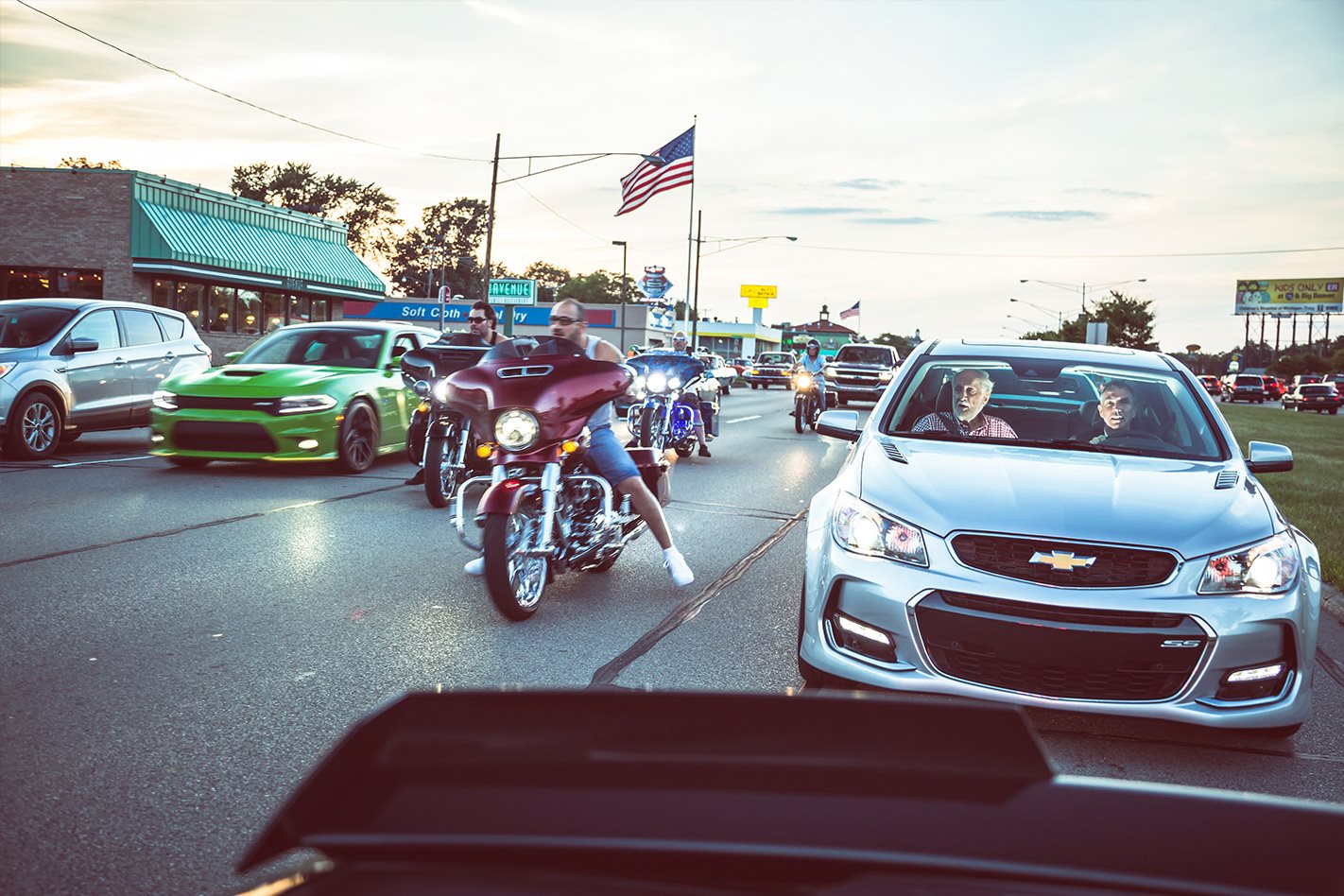 Ten days before we hit Detroit, Reuss vetoed our idea on the grounds that his Holden could overheat in the traffic and, besides, he didn’t have any spares.

Cruising isn’t the right word to describe the action on the Saturday. For much of the route, there are so many cars on Woodward that they can do no more than crawl. Which is one reason we choose to cruise on Tuesday evening.

This year, by various unofficial estimates, there were somewhere between 60,000 and 100,000 true ‘cruisers’, classics like those that inhabited Woodward Avenue a half-century ago. The effect is a weird kind of time warp. Ageing baby boomers, driving cars they could only dream about as teenagers, all but shut down the nine towns along the 26km Woodward route north from Eight Mile Road through Ferndale and Royal Oak and on to Pontiac.

Remember what Marlon Brando and Lee Marvin did in The Wild One? This time it’s with the cooperation of police, officials and sponsorships from major companies. 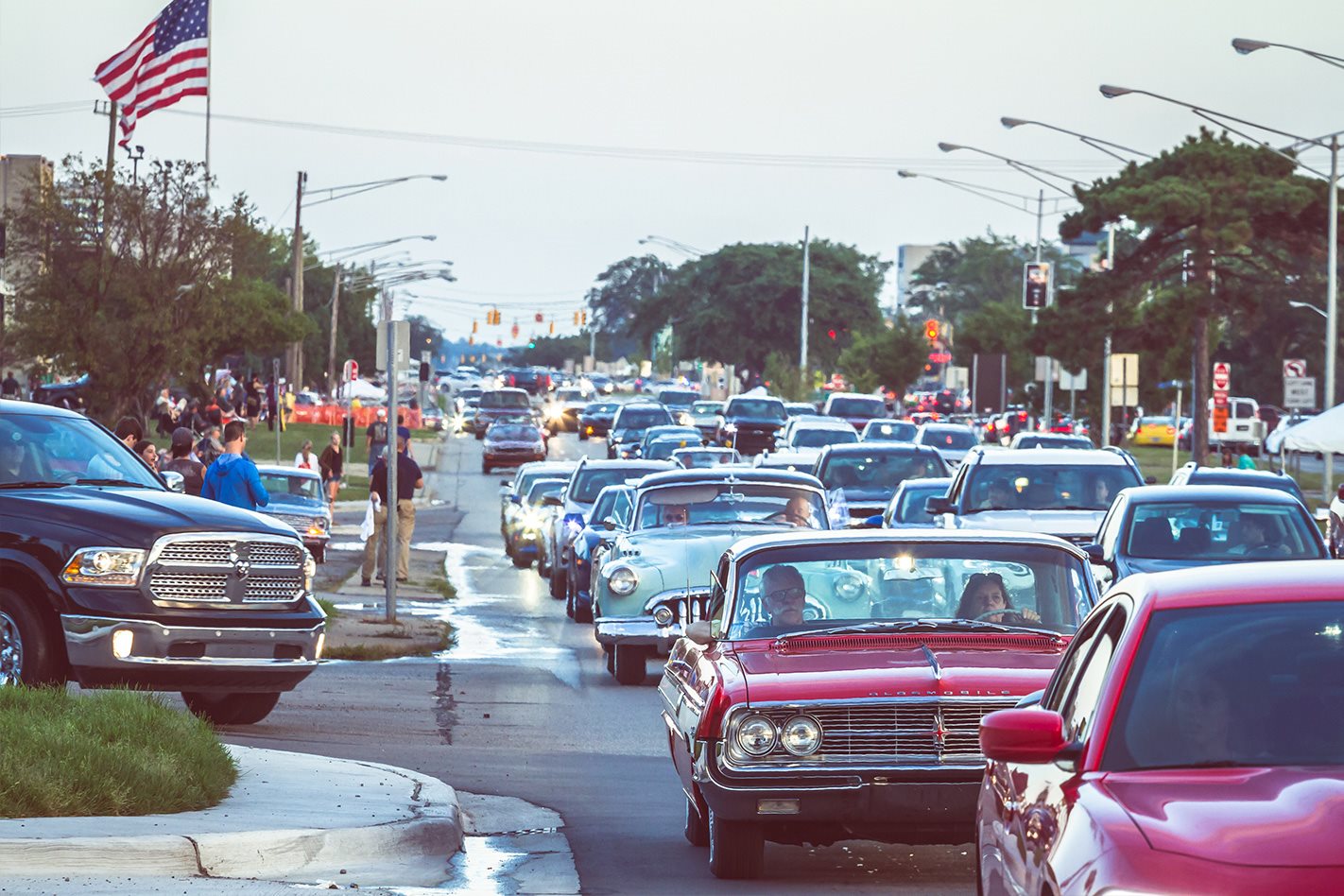 There are no formal entries, no rules, only an understanding that the car should be reasonably old, interesting and in reasonably good condition.

The right two lanes, along the kerb, are reserved for the cruisers, most dating from the mid-’50s to the oil embargoes of the 1970s. Local traffic continues, more or less, in the outer lanes. Cars from across America start arriving a week early, their drivers enticed by the lure of an event that promises to bring back the days when nothing more than a crummy radio, a scrounged car and a slow jaunt down a suburban road delivered teenage nirvana.

Held the third Saturday in August, the Woodward cruise, the biggest participant car event of any kind in the world, attracts over a million people and enough cars to pack a 10-lane avenue in suburban Detroit.

Back in 1995, Nelson House, a Detroit plumber, thought it might be more fun to watch the cars in his club do what they originally did best ... cruise. 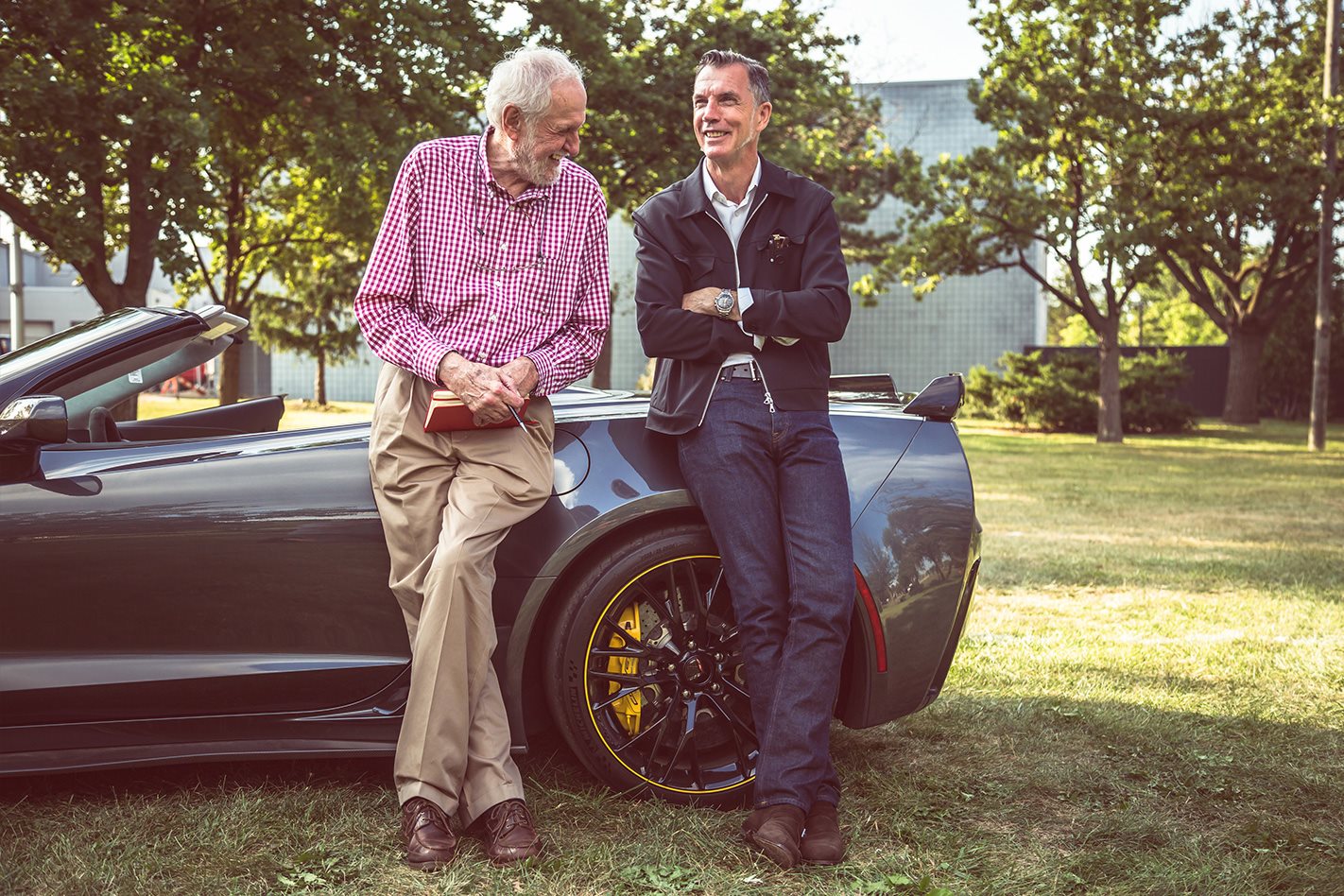 He lined up a few hundred for a run up Woodward, with a side goal of raising some money for a local children’s soccer club. Organisers expected 30,000 to 40,000 people would come out to watch. The crowd turned out to be closer to 250,000 and has grown ever since.

Simcoe has arrived early in his summer wheels, a 485kW Z06 Corvette convertible (in winter he drives a mid-sized truck), just as the cruisers are coming out for the evening. He wears casual car designer gear: white shirt, smart jeans, Simcoe reserves a tie only for Mary Barra, GM’s CEO.

Mike has helped organise a display of GM employees’ classic cars in Memorial Park on Woodward where we meet, one of a variety of events and private parties arranged across Detroit for the days leading up to the Cruise. Two weeks earlier, 960 cars owned by GM employees turned up on a Saturday beside the lake of GM’s Warren Technical Centre. Most were GM brands, but there was also a 1932 Rolls-Royce.

On the Saturday before the cruise, thousands of Dodge and muscle car fans flock to Pontiac for Roadkill Nights, an authorised quarter-mile drag strip on Woodward. 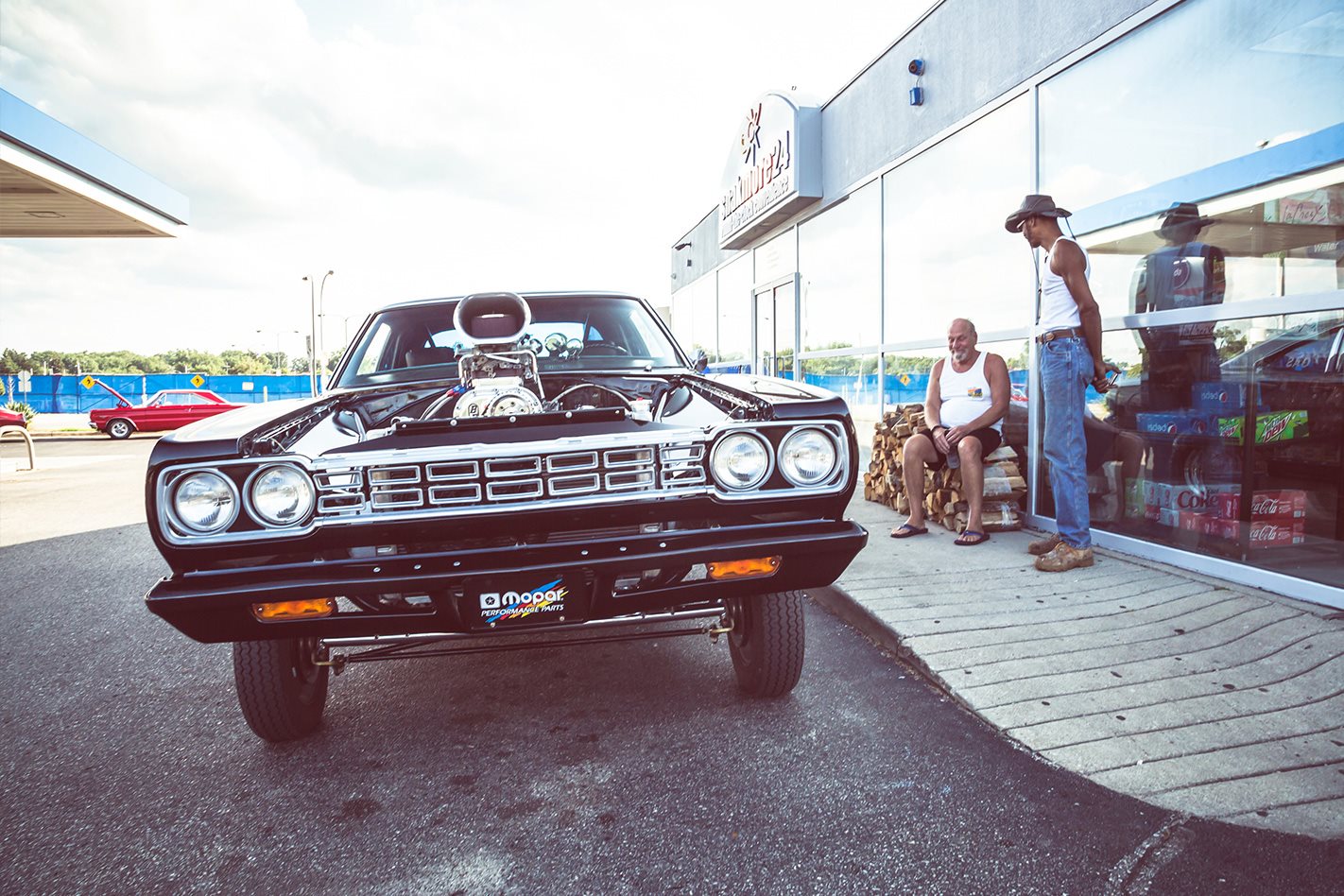 Now in its third year, Roadkill Nights combines drag races with the atmosphere of a fair, complete with muscle car displays. Visitors stood in hour-long lines for thrill rides in a 527kW Dodge Challenger SRT Hellcat, Charger SRT Hellcat and 481kW Dodge Viper. With prize money totalling $35,000, 150 drivers signed up to run with each car expected to race at least three times. Roadkill Nights drew an eclectic mix, from a ’70s-era Chevy Nova wagon to a current top fuel dragster.

There were plenty of converted muscle cars, including an original Dodge Challenger making 1864kW and clearing the quarter mile (402-metre) trap in five seconds.

Snapper Wielecki is bursting to get a shot of the SS surrounded by ’50/60s Detroit iron. Simcoe’s open Corvette becomes the camera car and we edge out into traffic that is already dense with cruisers.

Providing a running commentary on every fascinating car we see, Simcoe points to a 1962 Caddy Eldorado. 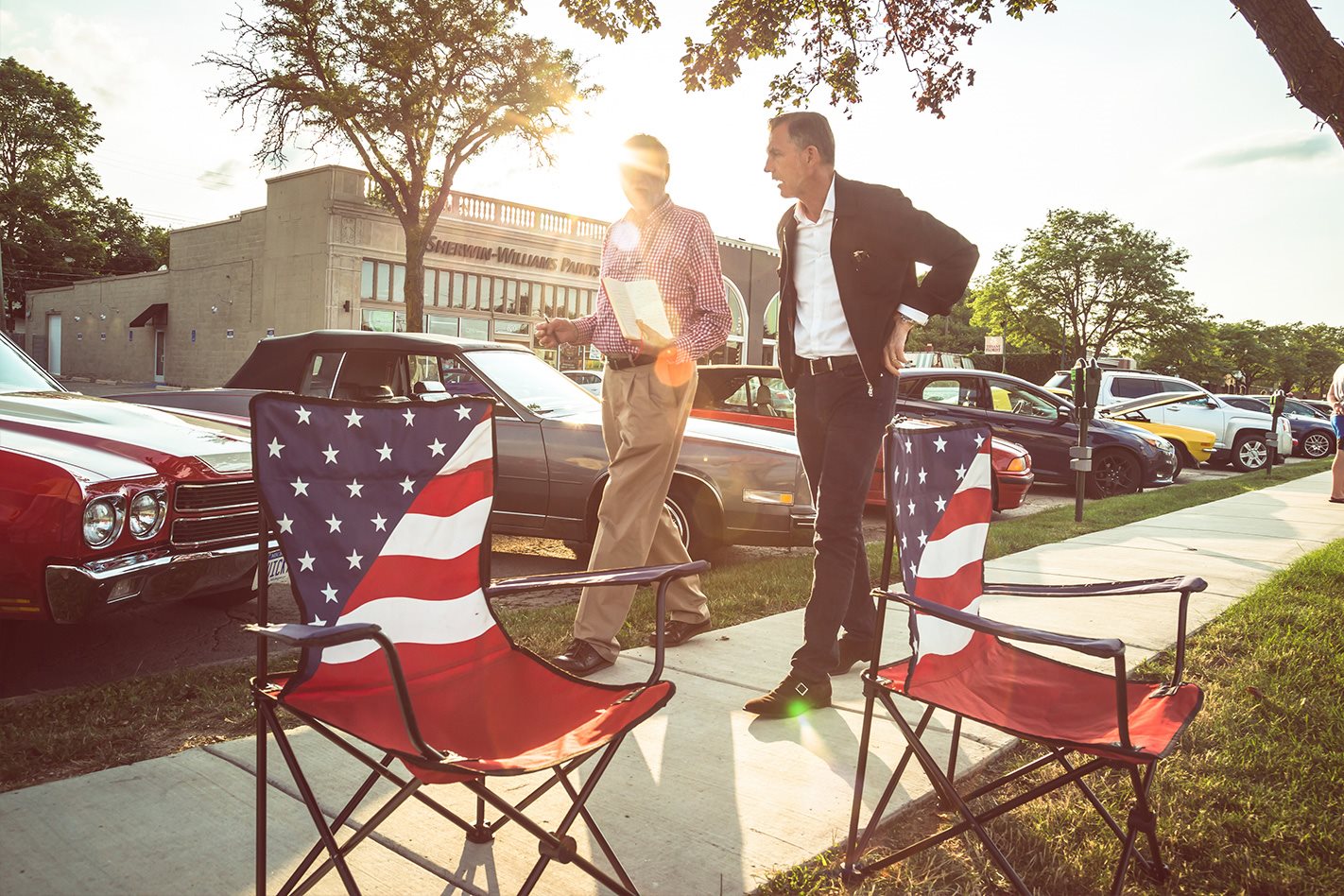 “There’s a great simplicity of line. These Cadillacs were still the Standard of the World (for decades, Caddy’s advertising slogan), their strong aggressive lines so beautifully handled. Nobody did it better. GM owned [body] surfacing.”

Given Simcoe’s appreciation of proportions and elegance, it is no surprise he prefers design boss Bill Mitchell’s 1960s cars to the finned and increasingly chromed extravagance of his predecessor Harley Earl’s 1950s models. 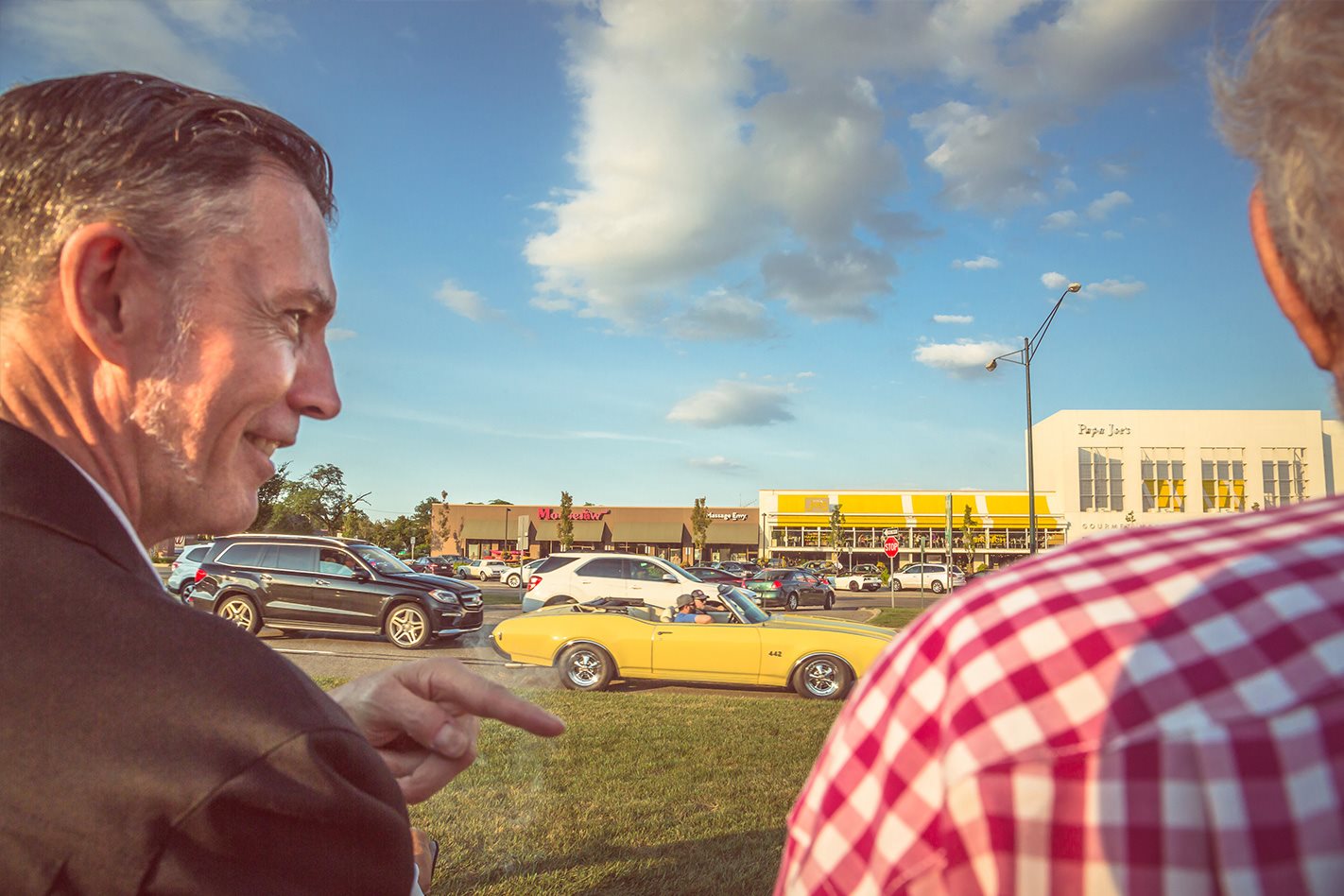 “The ’59s were an acquired taste and part of the transition from Earl to Mitchell.”

“Mitchell changed everything. He was a master; all that animal cunning.”

Mike’s only comment as a first-generation Lamborghini Gallardo slithers past: “It doesn’t fit a Woodward spectator event.” 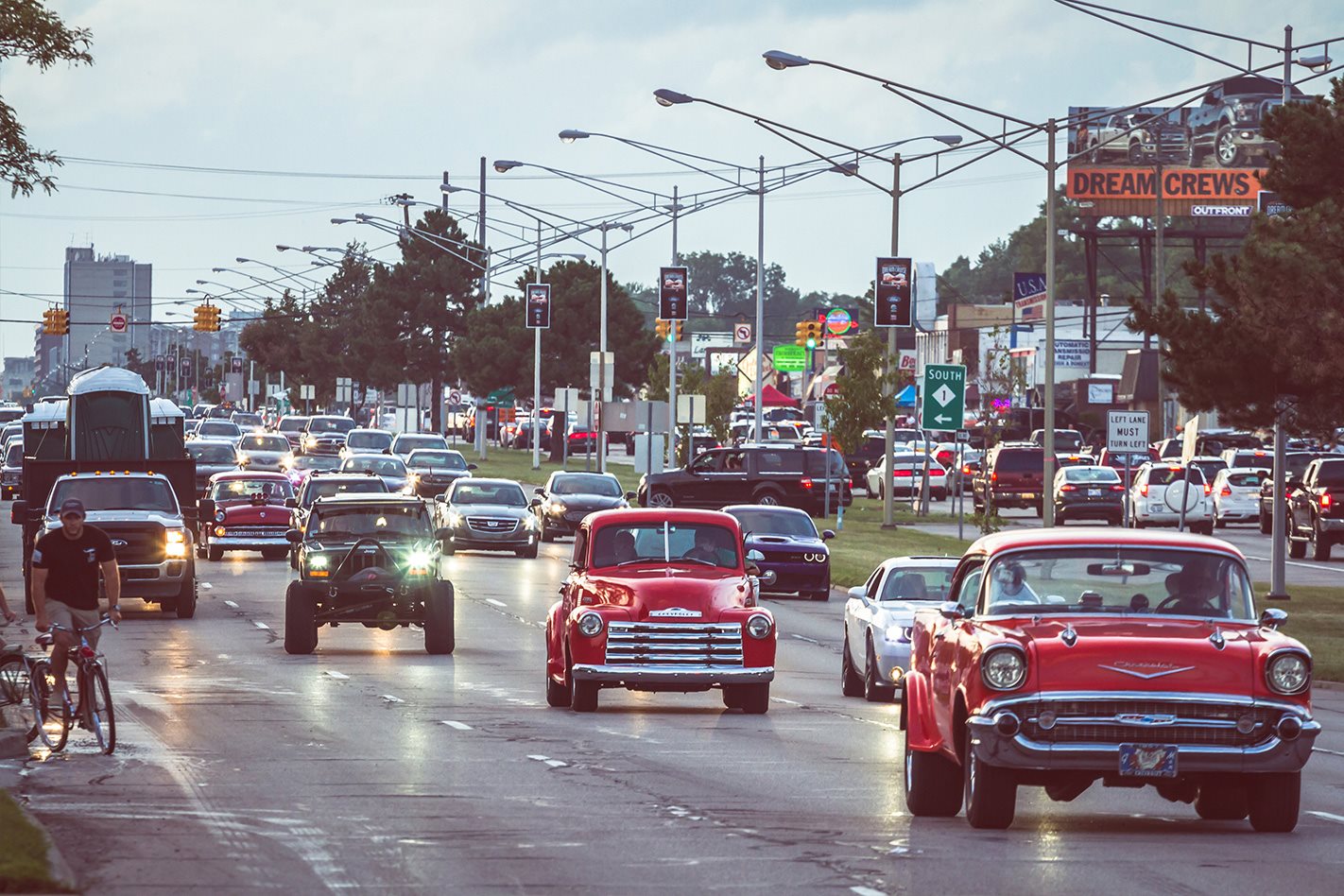 Says Simcoe, always the realist, “Big performance sedans don’t work here; people expect a more aggressive design, though awareness is part of [their lack of huge sales success.] Enthusiasts know about them, but they’re not for everybody.”

Where the parked cruisers look more interesting we stop and wander among the cars. The first-generation Camaro is, “a nice car” and he shoots down my criticism of the current model’s lack of visibility.

“A Camaro should be extreme. Today’s car has the proportions of the original [2006] show car, the high belt-line, the emotional feedback. When you’re driving through the pillbox, you’re looking through the exterior.” 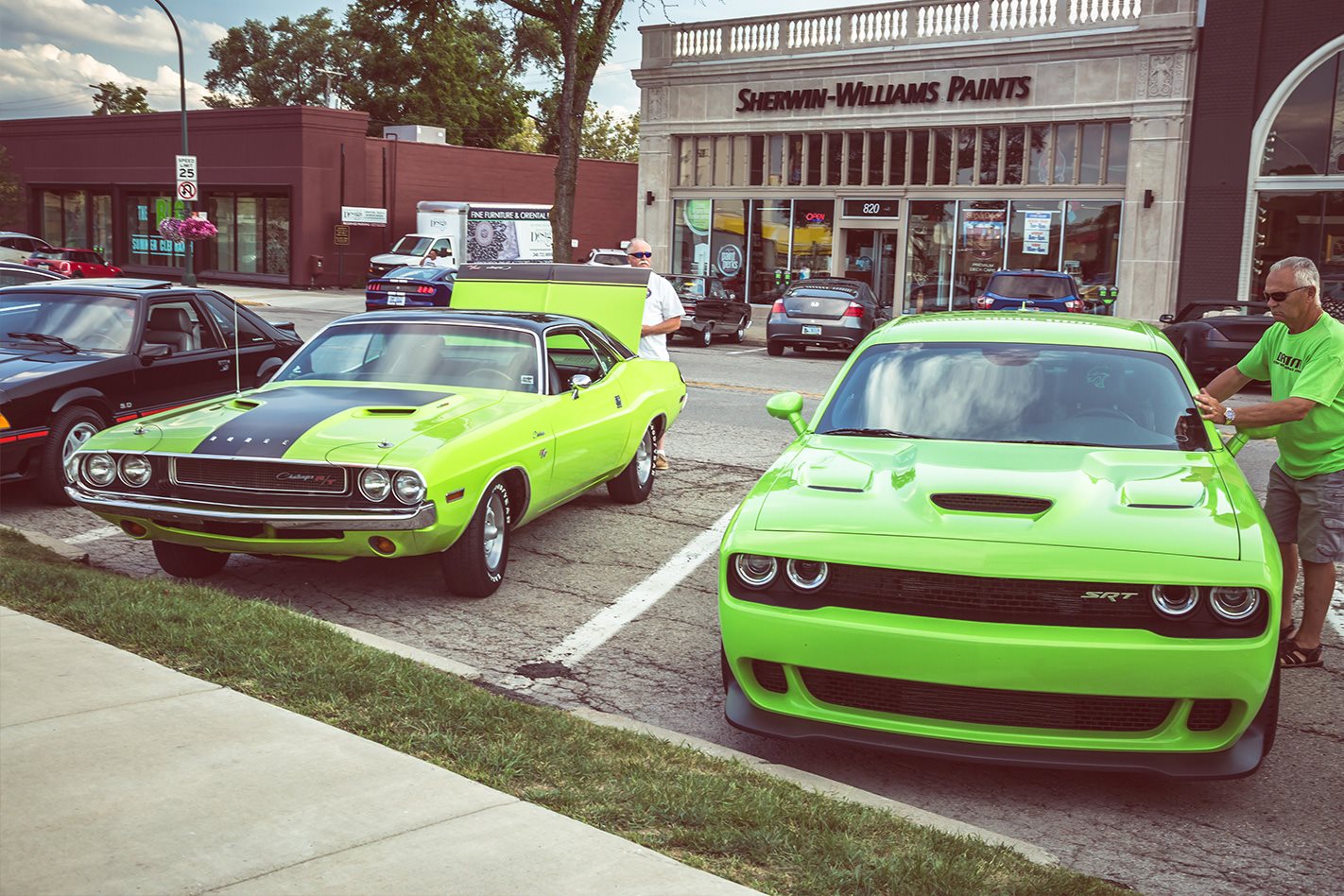 A current Dodge Challenger, parked close to a 1970 model, is next, “It’s delivering a myth, but the detailing and proportions don’t match the 1970 original.”

The owner of the older model tells us, “These cars are all about fun, nostalgia and money.”

“Most mass-market customers don’t want bright colours. Back in the ’60s, the run-of-the-mill models were more daring.”

“You can create the most beautiful car in the world, but if nobody reacts to it, you’re talking to yourself.” 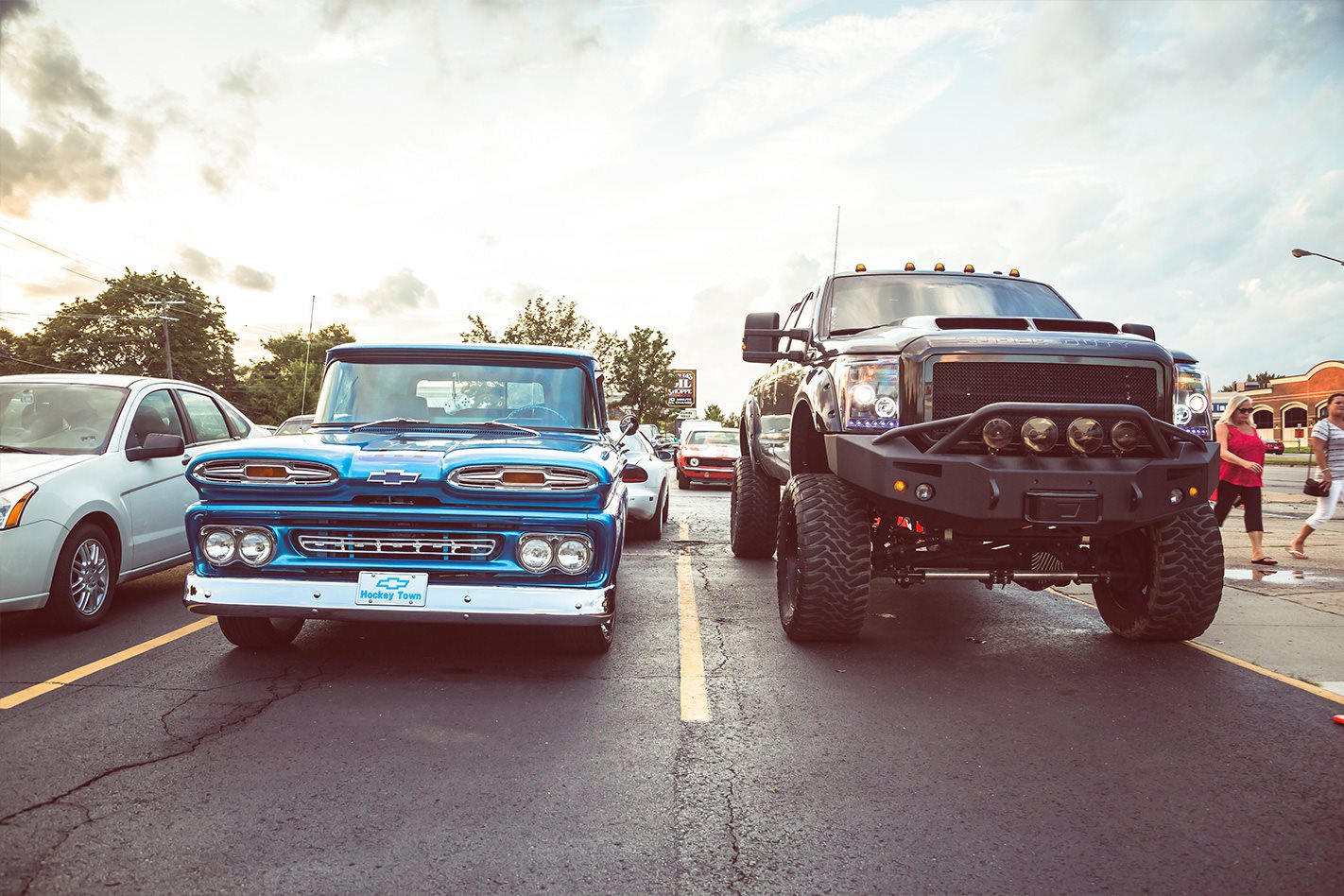 Two-door hardtop Oldsmobiles and Pontiacs from the late 1960s rumble past. Simcoe says what I’m thinking: the resemblance to the second-generation Holden [HQ] Monaro is obvious.

Says Simcoe: “The HQ was done after the American [cars], when the designers had more experience and [the result] is lighter, a softer [treatment]. The [Aussie Chrysler] Charger is the same.”

Simcoe glows when describing the HQ, “It’s beautiful, especially from the lovely super-thin A-pillar back with a light upper [body]. The HQ had proportion, surface and style … the HJ to HZ only got worse [in styling terms] from then on.”

At times it seems almost everybody in Detroit owns at least one car from the golden era of styling, a car they work on over the winter and pull out for the summer. A ‘Bugeye’ Sprite is dwarfed by the four-seat T-bird and Mustang fastback that momentarily flank the baby Austin-Healey. 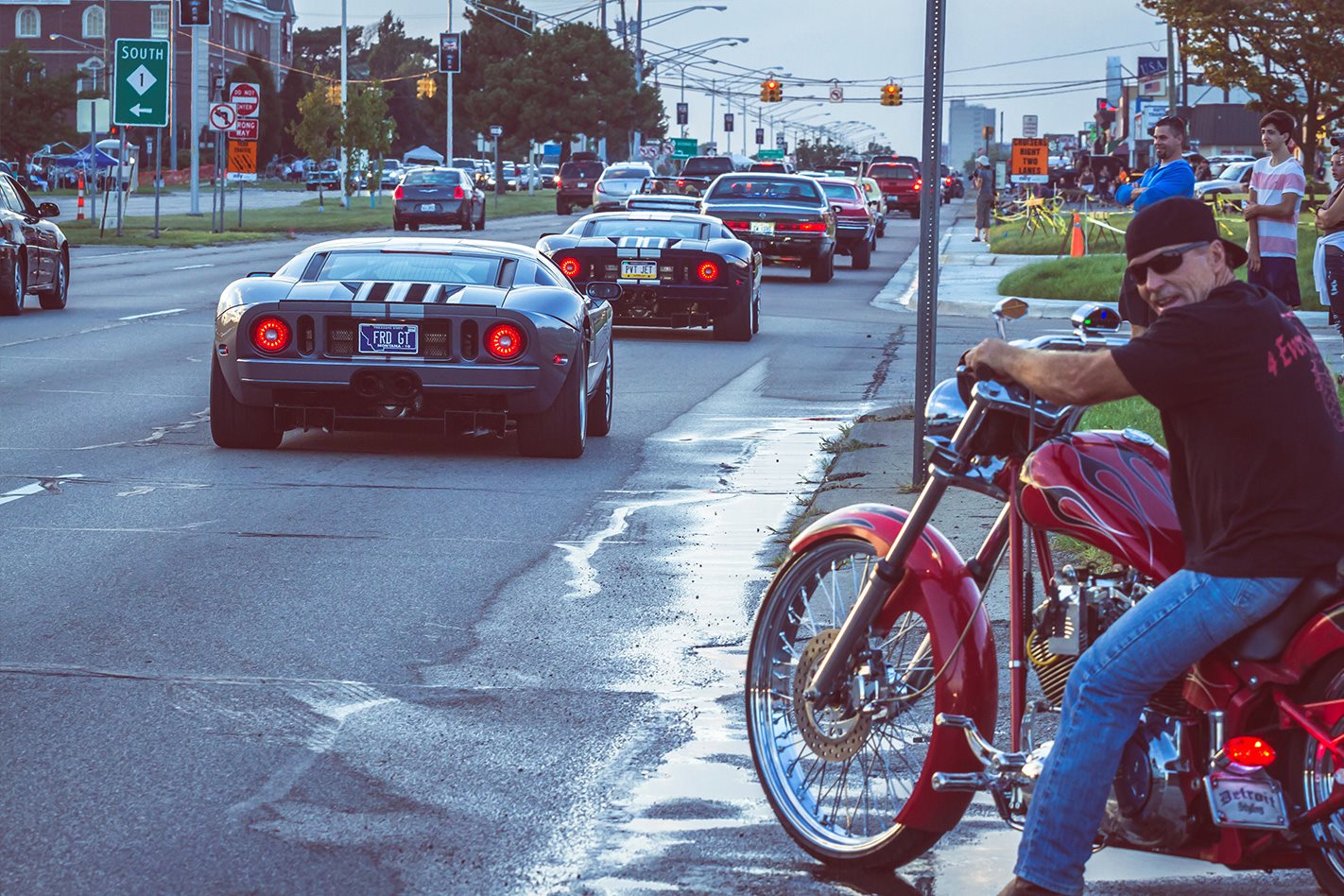 A drag bike, complete with nitro bottle, comes into view. Anything goes on Woodward.

“People are looking for the outrageous,” says Simcoe, reflecting on how the Woodward scene shifts as we start to leave in the darkness.

“The world has changed; at around 10:30pm the older generation goes home and by 11:00pm the rice-rockets arrive, as if the rest of the world drove four-cylinder turbos. This group is embracing new technology, so there are still kids embracing cars, [it’s] just that culturally cars are becoming different.”

Simcoe’s small collection of cars – an Aston Martin DB4, a Lancia B20 GT and, he hopes soon, a 1963 split-window Chevrolet Corvette coupe – have deliberately been chosen as symbols of what he sees as a great era in car design. 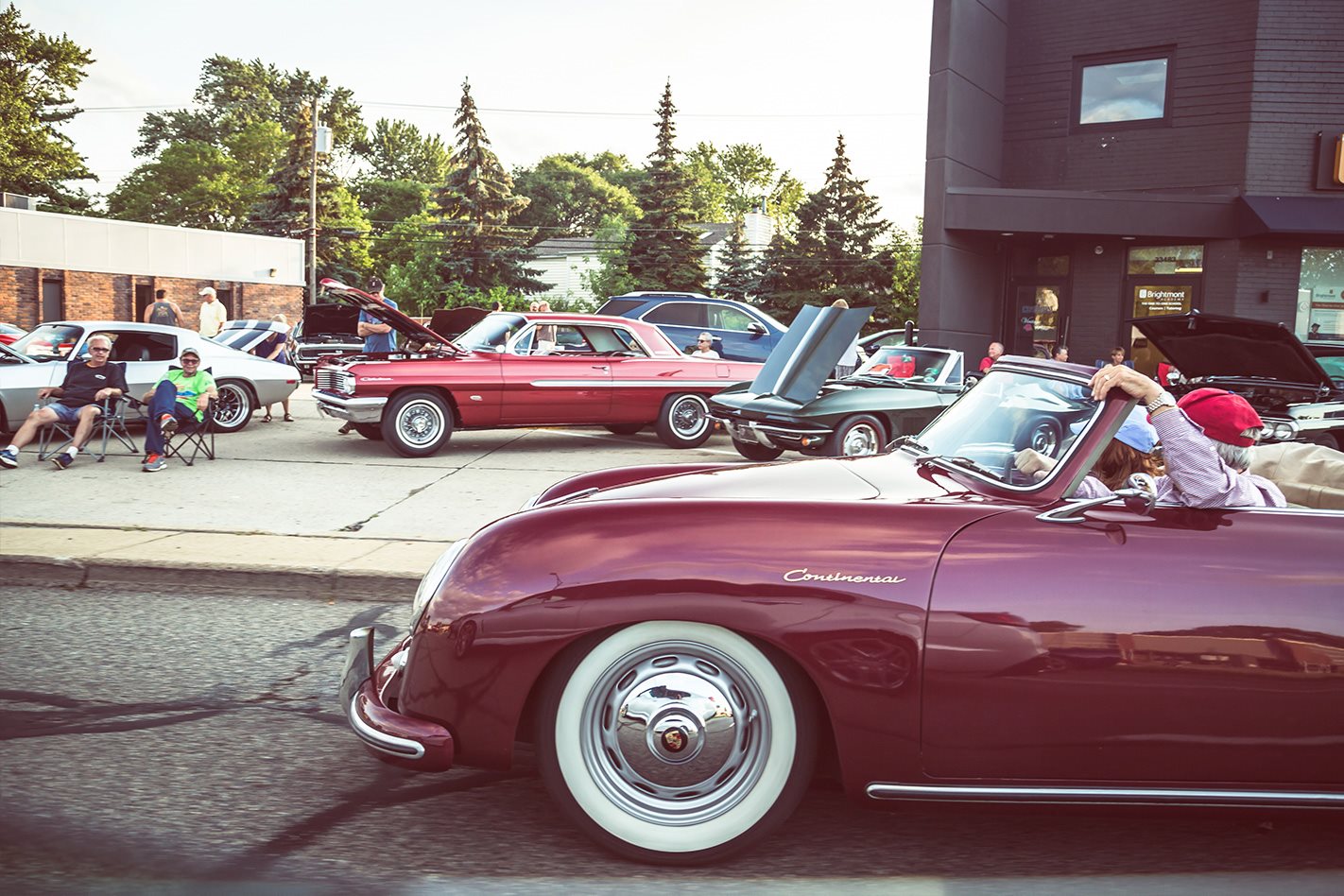 “The three nations [UK, Italy, and USA] were at the top of their games,” Simcoe believes.

“I’m still getting over the shock of the cost [of shipping the Lancia to Detroit]; it will be a bit of a surprise to people. I want to put the three side-by-side.”

During the 1960s, Detroit’s Woodward Avenue was the street- racing capital of the world. On any given night, owners of upwards of 2000 cars milled around a five-mile strip, some sitting at Ted’s Drive-in Diner, the car park resembling the pits at a stock-car race, others hung out at service stations, bars or coffee shops, or just cruised.

Among the hot 427 Corvettes, GTOs, Chevelle SS 396s, Mustangs and 426 Hemi Mopar Plymouths and Dodges, factory teams operated at a speedway level of ‘market research’ apparently racing for kicks – and not cash like the privateers – but really to see what was hot and what was happening. Engineers out to establish bragging rights as the night’s hottest car, ran against rivals up to 200km/h speeds before backing off and pulling into a side street or deserted parking lot to hide from the cops. The fast kids often got under-the-table support from the engineers.

During the day, Woodward was the link between old Downtown Detroit and the rich suburbs of Birmingham and Bloomfield Hills, an often prosaic, sometimes historic, eight to 10-lane, 37-metre wide avenue. Come dusk and it transformed into street racing’s Indianapolis. 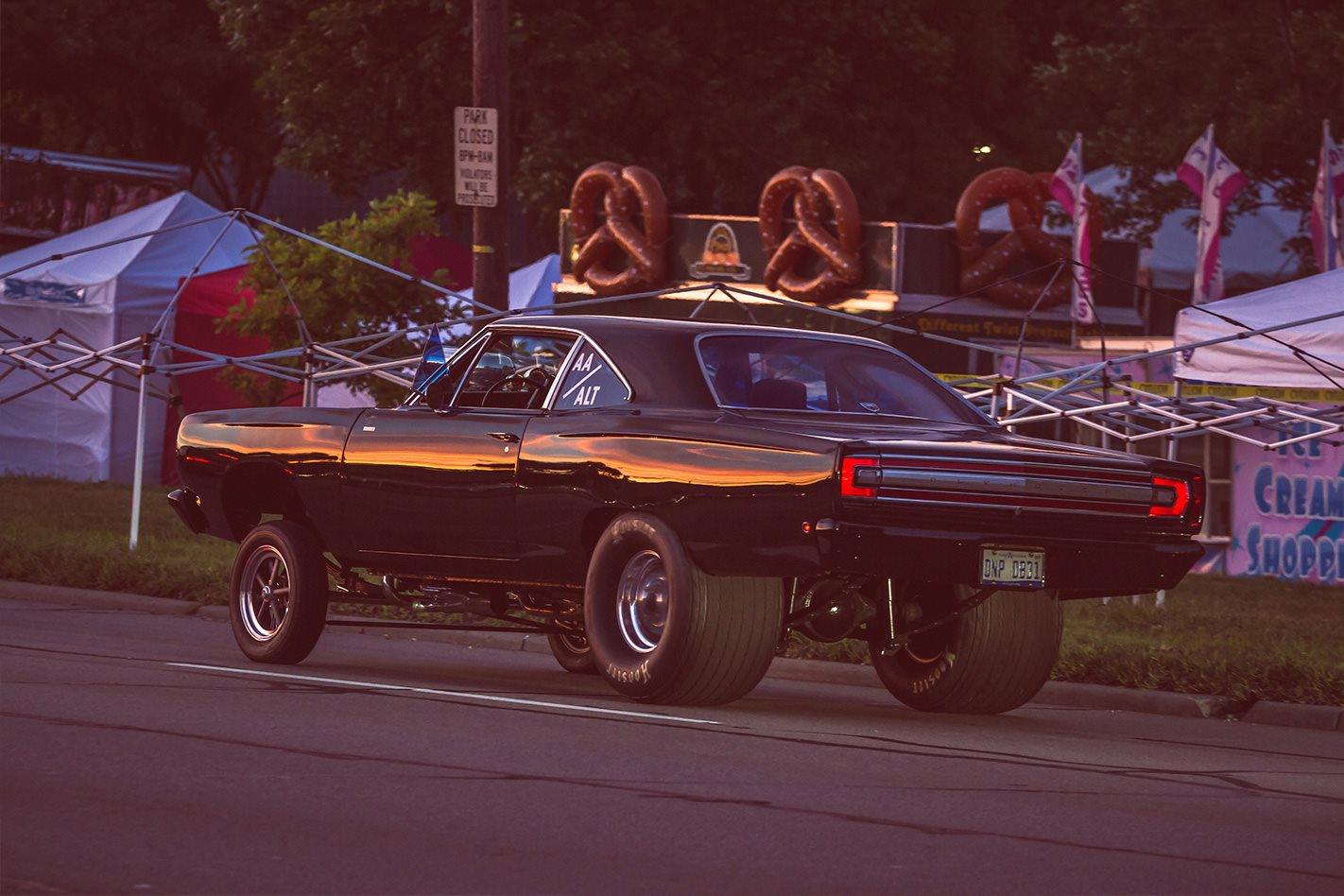 Every Saturday morning, even in the coldest depths of winter, gearheads congregate at Pasteiner’s Cars & Coffee on Woodward Avenue. For well over a decade, the hobby shop has hosted a weekly gathering where senior current and former car designers mingle with tattooed greasers over a mutual love of muscle cars, classic Europeans, custom hot rods, and everything in between.

Chuck Jordan, the fourth vice-president of design at GM, and addicted to 1:43 scale model Ferraris, once told Steve, “Ah, Pasteiner, you’re worse than a dope dealer pedaling these models.” 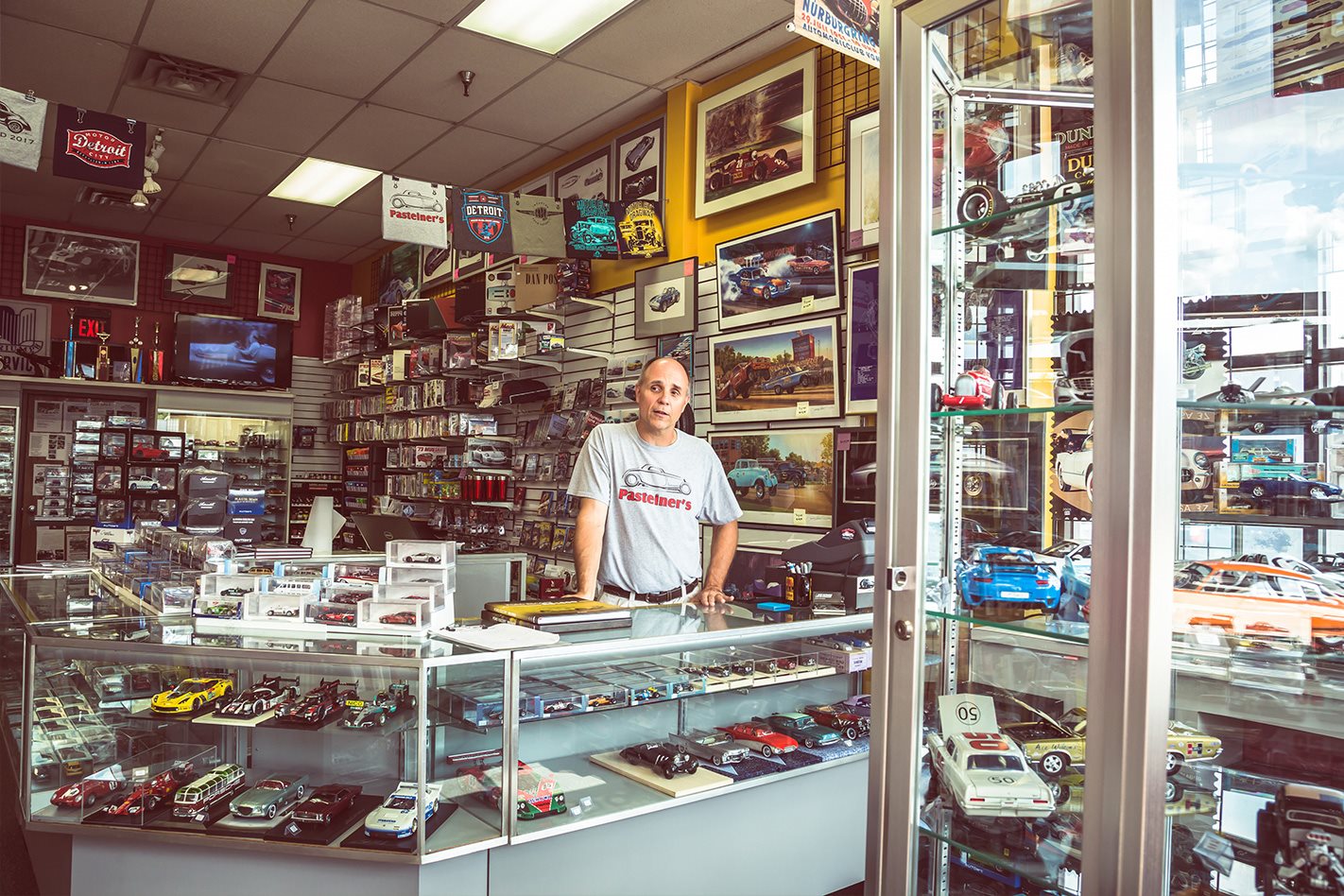