Wheels was on the story of the VE long before it hit Aussie roads, go back as we relive the days before the legendary Commodore was officially revealed

First published in the September 2005 issue of Wheels magazine, Australia’s most experienced and most trusted car magazine since 1953.

HOLDEN's investment in the all-new VE Commodore is expected to threaten - but not cross – the $1 billion barrier by launch time around September 2006.

The final figure, expected to come in between $900 and $950 million, easily outstrips any other spend on the development of a local car in the modern era. The previous Holden high was $600 million for VT Commodore (VN was $360 million and VB $110 million), but Ford has spent more, topping $700 million for both the EA- and AU-generation Ford Falcons. 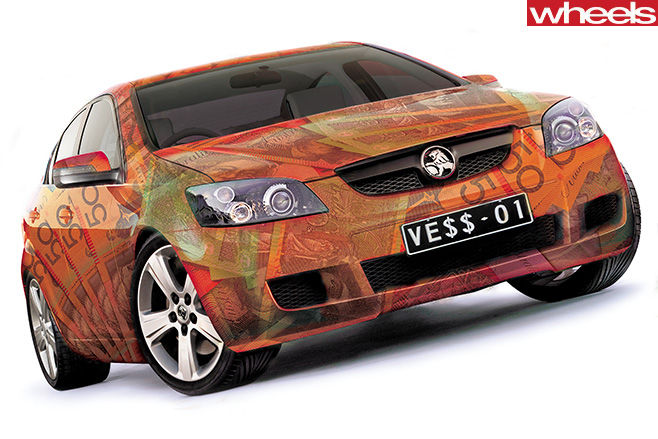 Staying under $1 billion would be quite a feat considering VE is a clean-sheet design with the new Zeta architecture. One area where cost has been saved is in the front suspension, where we can now confirm that simpler struts will be used in preference to double wishbones, bringing a saving purported to be $60 per car.

Local content levels will also drop, a reflection of both new sourcing deals and the Ion fiasco, which has forced Holden to - at least temporarily – import Alloytec engine blocks and heads.

The VE's retreating on-sale date means the third quarter of 2006 shapes as the most crucial few months in the company's recent history. Holden will roll out its all-new locally-manufactured large sedan, followed by the WM longwheelbase variants, while HSV should also debut the first of its VE-based models around then.

First published in the December 2005 issue of Wheels magazine, Australia’s most experienced and most trusted car magazine since 1953.

STRIP away the psychedelic chequerboard camouflage and what you’re looking at is the 2006 Commodore, around 10 months ahead of launch. These shots, taken from outside General Motors’ gigantic Milford Proving Ground near Detroit, give a crystal-clear indication of how the damn-near all-new Holden VE series Commodore will look when it arrives in showrooms around September next year. Holden, needless to say, will not be happy. 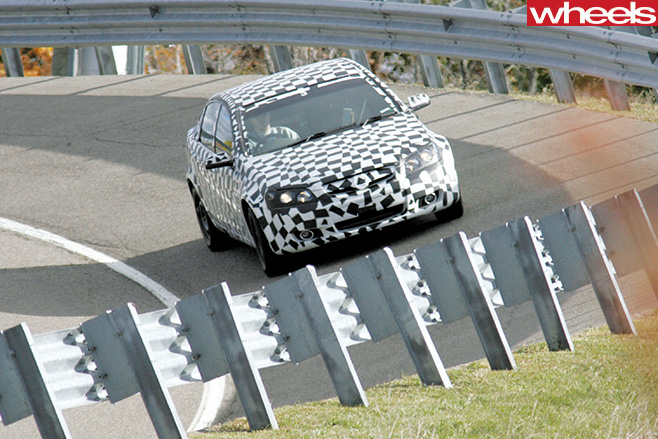 The VE is the first Commodore the company has designed from a clean sheet of paper. Every previous generation was an adaptation of a basic design from GM’s German-based Opel division. Without Europe to provide a preview, Holden must have hoped it could keep the car’s styling secret until close to launch date.

That’s because there’s so much riding on the VE’s design appeal. Because Holden has developed the car pretty much from scratch, more has been spent on the program than any other Australian-made model – almost $1 billion, according to credible sources. And, in a market that is less and less likely to buy big six- and eight-cylinder sedans, the 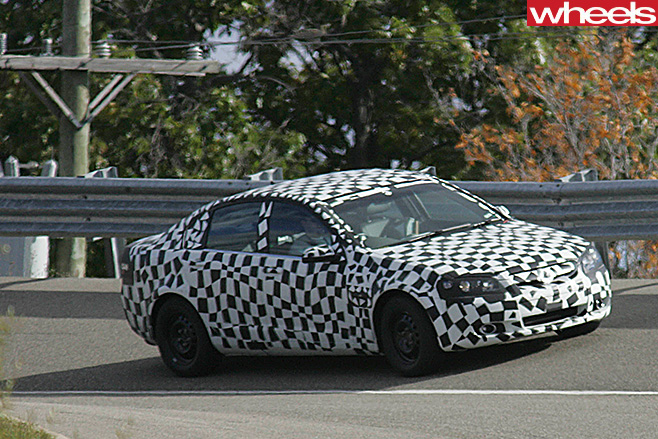 Holden engineering sources also say VE will be a better car than its predecessor in every measurable way. With petrol prices that show every sign of sticking around $1.20 per litre, fuel efficiency is undoubtedly one number that customers want to see improved. Holden boss Denny Mooney admits this factor is now a development priority. “We’re still playing around with gear ratios and other things to optimise fuel economy,” he was recently quoted as saying. “We are looking at six-speed automatics and continuing to wring every percent out of the engine.” 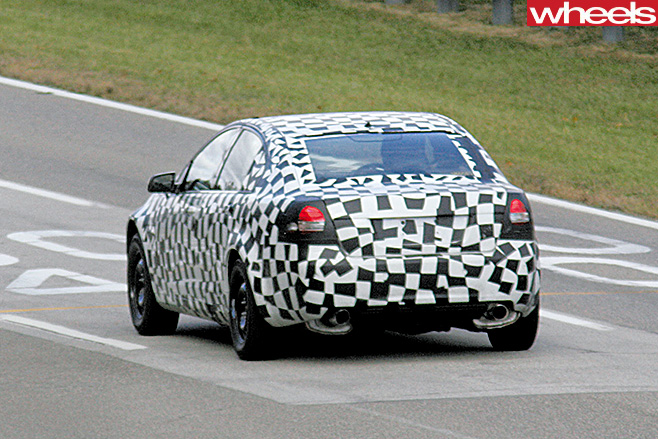 The sobering reality hit home emphatically after September, a month in which the imported Toyota Corolla outsold the Australian-made Commodore and Falcon to be the nation’s top seller. Holden’s response was immediate: employee discounts for everyone – a measure that some analysts say will erode Commodore’s residual values.

How will the all-new VE attract sufficient buyers to recoup its $1 billion investment? Mooney says the key is to build an “exciting car that people want to drive”, one that will not only entice private buyers, but also the ‘user-chooser’ lease contingent.

Obviously, styling is a vital component of the equation. But looks alone will not be enough. Holden’s engineers must deliver a technical package to beat the new Commodore’s competitors, present and future…

First published in the July 2006 issue of Wheels magazine, Australia’s most experienced and most trusted car magazine since 1953.

WITH the reveal of Holden’s crucial new VE Commodore now just weeks away, Wheels has secured undisguised images and crucial new details of the new model courtesy of website partner CarPoint. From the model line-up, to the sheetmetal, interiors and drivetrains, here’s what to expect.

Having spent $1 billion developing VE, Holden is determined to sell a richer and therefore more profitable model mix. So the entry-level Executive and second-tier Acclaim are set to be replaced by one new base model, Omega. 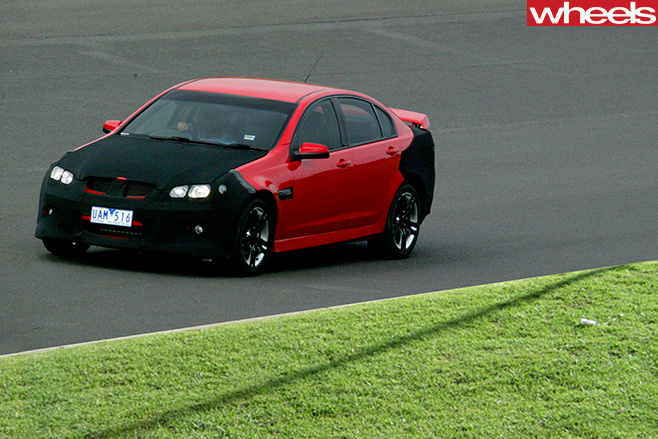 Prices will inevitably rise, but by exactly how much is still unclear. Nevertheless, expect VEs to be more expensive than equivalent Falcons. With the Falcon XT retailing for $35,880, industry pundits forecast that Omega could be at $37,990, a rise of $1750 over the current Executive with air-conditioning.

The current situation that sees V6 Commodores get stability control, but the more powerful V8s miss out, will be rectified with VE. All models in the range will come standard with at least front and side airbags and Bosch ESP. Curtain airbags will also be available for the first time.

It looks bigger, but the reality is that VE has almost the same body length as VZ. The big change is in the wheelbase, which is around 100mm longer than the outgoing model. This promises greater dynamic stability and on-road presence, and also means the rear door and wheel arch are now separated, adding a degree of maturity to the design. 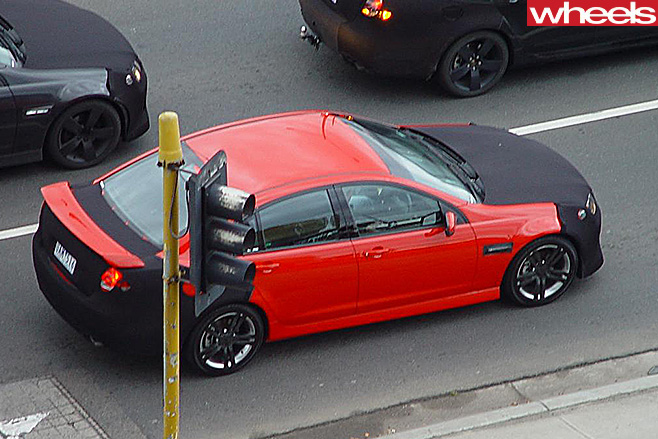 Design follows three basic themes, beginning with the base-model Omega, then splitting into the luxury and sports variants. Each will be differentiated by unique grilles, wheel designs and sizes, lights treatments and chrome embellishments. 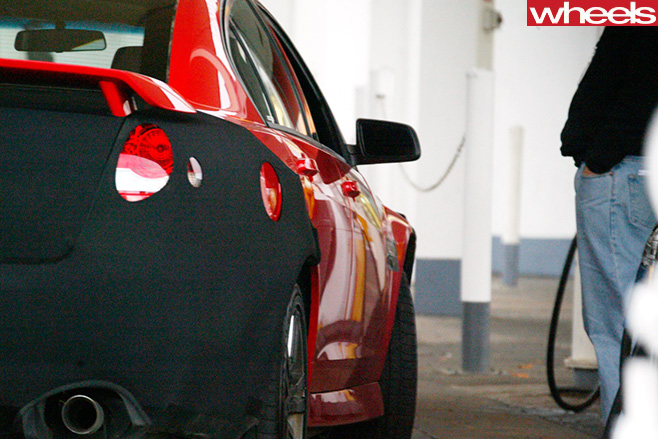 But it’s the new SS-V which will surely be the headline grabber, with its gaping front inlet and  dramatic V8-Supercar-style rear wing. Quad pipes (two either side) add a startling exclamation point.

VE is the first Commodore not based at least loosely on an Opel large-car platform. Instead, Holden has developed its own rear-wheel-drive architecture, which has since been adopted for use both in the USA and some GM outposts.

As we’ve reported, the antiquated semi-trailing arm rear suspension has been traded in for a sophisticated four-link design that’s manufactured by ZF in Europe for Holden, shipped to Elizabeth, assembled off-site, and then uploaded as a modular unit. This process reputedly saves 10 minutes per car in the manufacturing process. 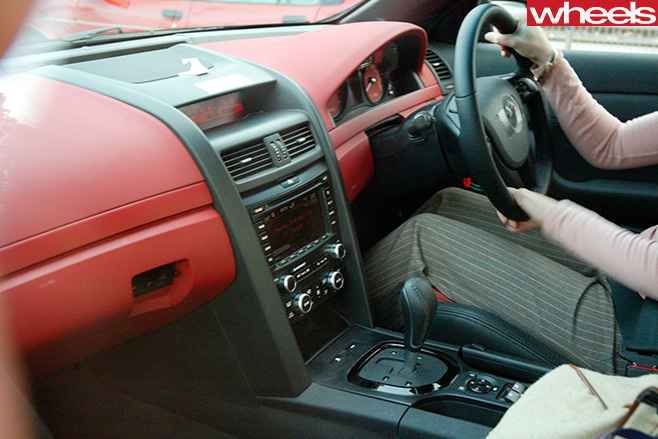 The rack and pinion power steering module also comes from ZF, as does the MacPherson strut front suspension.

This is a far cry from the old front end, with its double ball-joint lower A-arm, and a front-mounted steering rack. In other words, VE follows the same concept as the Ford Territory. This allows the fitment of front driveshafts for AWD (something the Holden architecture is designed for) as well as providing a host of ride, handling and steering advantages.

VE is around 100kg heavier than VZ, so bigger brakes are called for, with the front PBR disc diameter climbing to 330mm on standard models. That also means a larger wheel size, with Omega on 16-inch, and the sport and luxury models riding on a variety of 17- and 18-inch alloys.