Honda is on a mission to inject some sportiness back into its brand.

There's the new NSX and Civic Type R (sadly not for Oz), its F1 comeback is underway with the legendary McLaren team (though probably best we gloss over that) and now it’s added a third, somewhat smaller, performance car to its range. First shown in concept form at the 2013 Tokyo show, the S660 is a spiritual successor to the Beat, sold in some export markets in the early-90s.

Like the Beat, it features a mid-engined layout, with a diminutive 660cc, three-cylinder turbocharged engine producing 47kW and designed to meet tax laws in its home market of Japan. “Err, 47kW?” we hear you say. Sounds like a Japanese domestic market-only kei-car (mini-car), right? Nope. You see, there’s a twist. 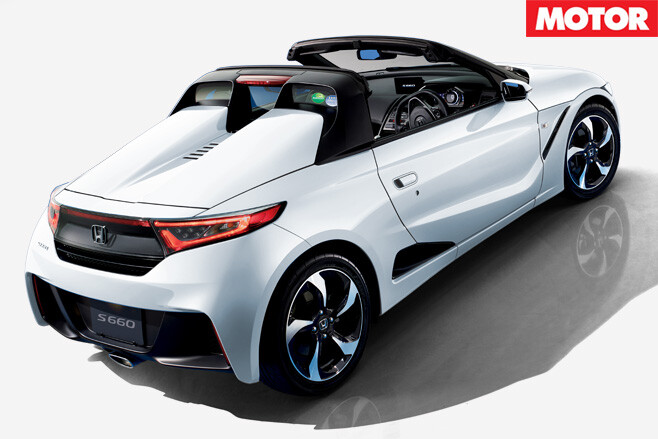 Honda engineers are also working on an export version that could very well end up in Aussie showrooms. This version, which would most probably be called the S1000, packs a more powerful 1.0-litre turbo donk, said to pump out more than 95kW.

Now for a coupe that weighs only a little more than 830kg, that’s some serious poke; enough to give the upcoming Mazda MX-5 a real run for its money in power-to-weight terms.

But for now, it’s the S660 that holds our attention. As we arrive at Sodegaura Forest Raceway, 90 minutes southwest of Tokyo, there’s three S660s sat in the paddock, looking almost identical to the 2013 concept car that spawned them; a rare treat these days. 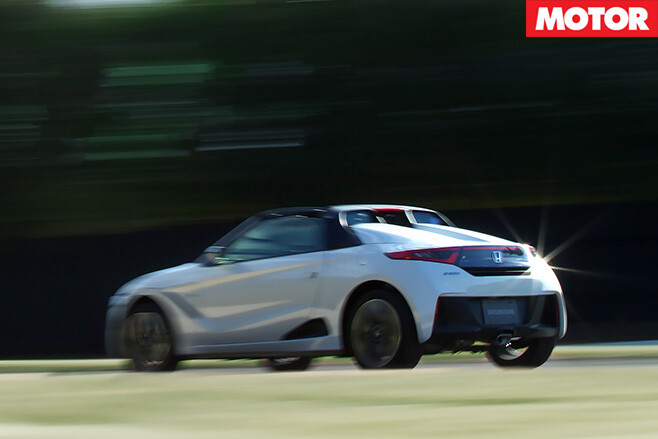 The S660 is the result of an in-house contest played out some four years ago at Honda’s R&D centre in Tochigi prefecture, north of Tokyo. Over 400 young engineers submitted ideas for new vehicles to company bosses, ranging from minivans to crossovers to sports sedans and sports cars, and the S660 design came out on top. In fact, contest winner Ryo Mukumoto says, “the top three contenders were all ‘kei’-style sports cars.”

As the victorious engineer who put the winning design in, the 26-year-old Mukumoto has been given a rare honour within the company – he was appointed to the rank of S660 chief engineer, making him the youngest new model head honcho in Honda’s history. “We wanted to make something special, something unique, an entry-level car for driving and motorsport enthusiasts,” he says of the S660.

He said it all there, because it’s the car’s unique chassis and gearbox that make it a game-changer. The mid-engine, rear-wheel drive chassis is constructed out of an aluminium and steel sub-frame that’s stiffer than the old S2000 sports car. The Japan-spec S660 might only be fitted with a 47kW engine, but the engineering behind this chassis promises to be capable of handling more than twice that power. The S660 employs the same three-cylinder, 660cc turbocharged three-pot found in the popular domestic-specification N-Box kei-car. However, engineers have revised the turbo geometry to improve throttle response, redesigned the turbine and tweaked the exhaust system to produce quicker off-the-mark acceleration, along with stronger mid-range torque.

To lift the overall performance of the engine, the redline is raised from 7000rpm to 7700rpm, while a deeper oil pan helps maintain engine lubrication even during higher G-force manoeuvres, such as hard cornering or heavy braking.

From behind the diminutive 350mm steering wheel, the S660 is like no kei-car we’ve ever driven before. Even with its seemingly uninspiring 47kW engine, the S660 is an absolute blast to drive. 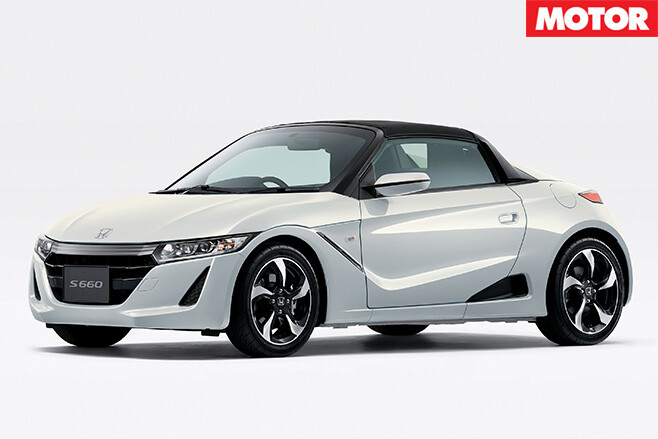 Why? Because, like the S2000 before it, the tiny Honda has been over-engineered to the point where it cries out for punishment. The turbo spools up at around 2500rpm and delivers a healthy dose of torque right to the redline. But it’s between 5000 and 7700rpm that the engine really starts to sing, letting out a high-pitched metallic raspy roar that belies its tiny capacity.

You accelerate hard, pushing towards 6000rpm as the engine screams wildly, suggesting a lightning fast gear change is due. But then you realise there’s another 1700rpm to go...

Following in the footsteps of the S2000’s legendary gearbox and shifter, the S660 incorporates a notchy transmission with delightfully short throws and tight, precise gates. It has well-positioned pedals, a light clutch and the gear ratios are superbly matched to the engine. 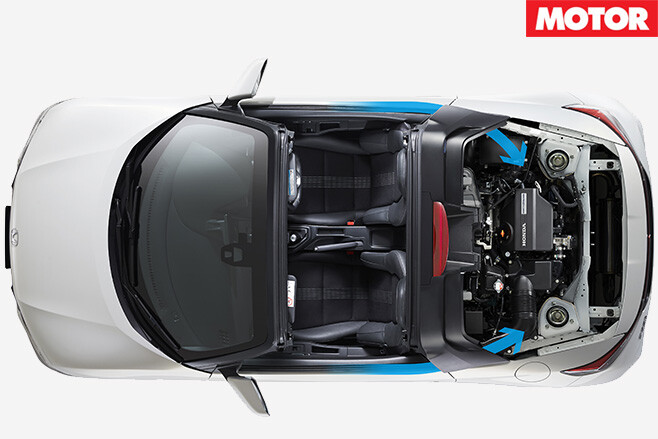 We realise that there is not a lot of power on tap, but even when pushed into a corner at 100km/h, the rear end just does not budge. Honda’s ‘Agile Handling Assist’ system regulates brake pressure to the inside front wheel to enhance cornering, and to complete the package, specially developed 15-inch Yokohama Advan Neova tyres provide traction levels previously unheard of in kei-car terms. At higher speeds you can also feel the rigidity of the chassis, both through corners and under full braking.

The downside is the fact that the traction control can’t be switched off, so there’s no oversteer to play around with. But there’s no understeer either; just solid, pinpoint balance. There’s just enough weight in the steering, sufficient feedback and a crisp turn-in.

While it is tightish in the cockpit, this writer was able to fit his 189cm frame into the car and operate the pedals without smashing his knees on the steering wheel. Only just, mind you. The small steering wheel fits nicely in the palms and the stick shift is placed exactly where it should be. Seats are situated low, trim levels and interior materials are plasticky yet passable and the large centrally-located tachometer sets the driving tone.

Perhaps our only question marks are centred around the lack of raw power (in this Japan-spec model) and its fiddly soft-top roof, which must be manually folded away and placed in the tiny boot in contrast to the automated roof motion of its spiritual S2000 predecessor. But other than that, the S660 takes the kei-car genre to new heights. And yes, to answer the obvious, apart from that 1.0-litre export version, Honda is currently putting the final touches to a Type R version that we believe employs the same 660cc engine, further tweaked to deliver 75kW.

The S660 tempts you to push to the limits and then asks for more. It fits like a glove and handles like an extension of your body. The chassis, suspension setup, engine and gearbox respond – like an Iron Man suit – to every minute input and make you feel like a better driver.

In one fell swoop, the S660 has totally redefined kei-cars. You can really push it to max revs and the tiny Honda will just keep demanding more.