Life with a Lamborghini Huracan

The further you drive in Australia with this petite Lamborghini, the faster 449kW feels

The further you drive in Australia with this petite Lamborghini, the faster 449kW feels.

THERE are some days where the inevitability of autonomous cars – and an end to all we know and love of driving – seems only mildly appalling. Like the loss of full-strength beer at the cricket, choosing films in a “video” shop and making eye contact with strangers.

And then there are others where it seems like such a loss to humanity that you just want to take the Google Car out with a rocket launcher. It’s been a few of those days because we’ve been driving the new Lamborghini Huracan LP610-4 on Aussie roads for the first time, an experience that brought joy to people near and far, but especially those within the car. 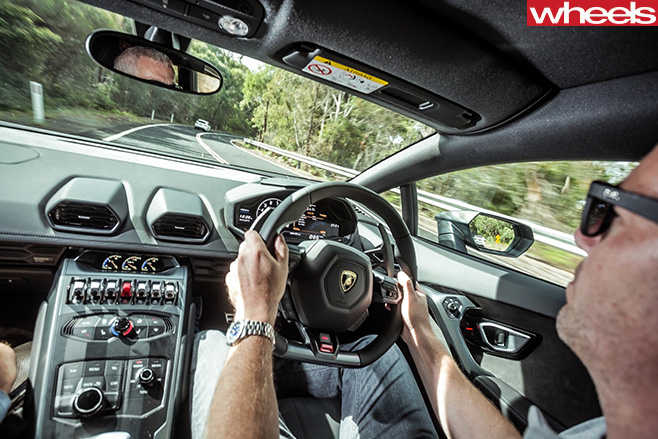 Every one of the 22 people I took for passenger rides over two days in our visually arresting matte Batmobile (circa Dark Knight, obviously) came out of it incapable of forming a sentence not containing the word “awesome”. All of them smiled with the same intensity as the youngest, a six-year-old boy who we let fire it up, using the jet-tastic “torpedoes away” start button.

Then there were the disbelieving, almost involuntary smiles on the faces of thousands of people we drove past. And my personal favourite, the 70-in-the-shade tradie who leaned in the window to say: “Nice car. Must be expensive, eh? Shame you had none left over to paint it.” 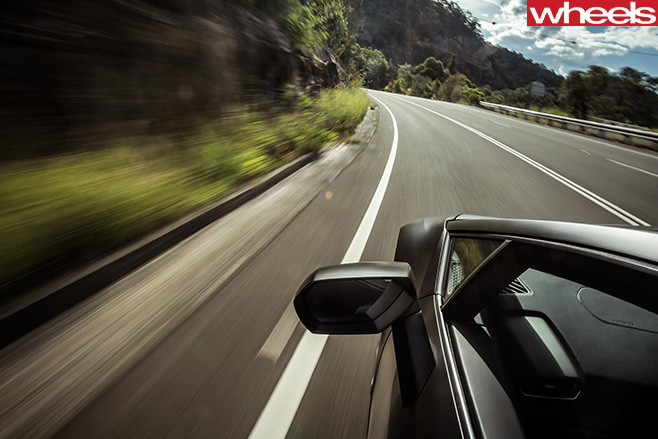 It’s not just the styling, which looks like the work of Darth Maul, that grabs people and makes every man who climbs in make the same “corrrrr” sound. It’s the outrageous, almost comical noises that explode from the nasty, naturally aspirated 5.2-litre V10.

The Huracan has an Anima (it’s Italian for “soul”) switch at the bottom of the stumpy steering wheel that starts up in Strada (“Street”) and gives you completely the wrong idea about the car. While it kicks into life with the grumbling of a bear in the woods, it soon settles into quiet, almost polite obedience. There’s a nice, low growl from the exhaust and it’s certainly not slow – 449kW and 550Nm never is – but it is remarkably compliant and restrained for a supercar. 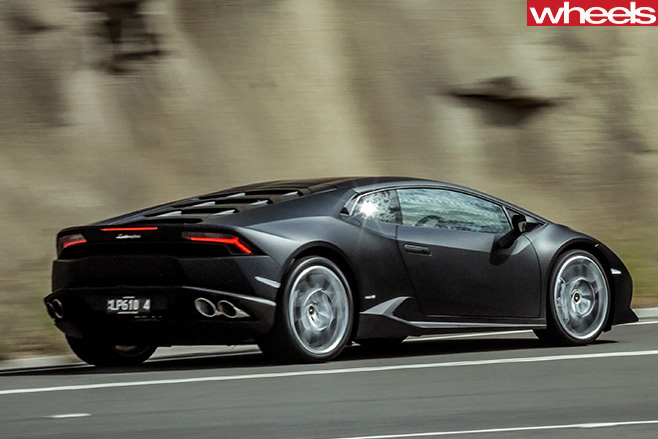 In automatic mode, the entirely new and vastly better dual-clutch gearbox is so smooth after the lurching, drunken E-Gear system in its Gallardo predecessor that it’s like comparing the Jimmy Barneses of different eras.

Flick the switch to Sport, however, and it sounds like someone’s shoved a modified Harley-Davidson up your backside, only with more crackle and pop on the overrun. I’ve never made so many unnecessary down-changes in one car. This was also partly because using the giant paddle shifters is such childish fun; they look and feel like Teenage Mutant Ninja Turtle toys, and are almost sharp enough to cut yourself on.

Other parts of the interior are a bit disappointingly plastic, however, and there’s still too much Audi in some of the buttons, all of the software and the key, which could be from an Audi A4. Putting the controls for the indicators and wipers (which aren’t very good when it rains) on the steering wheel is also slightly annoying. My biggest complaint, though, is that the seats are too hard and particularly punishing on your lower back. 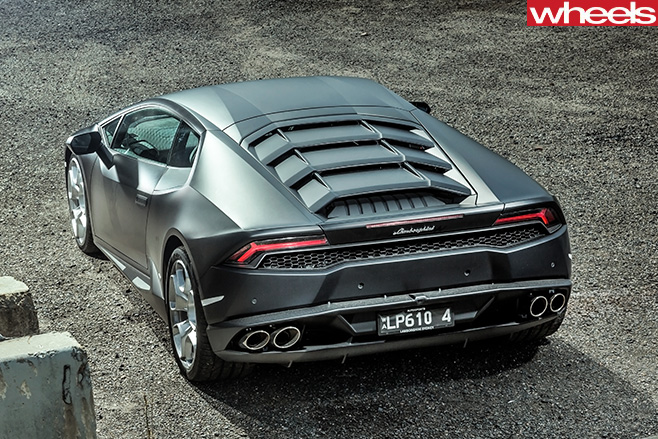 Drive the Huracan through a tunnel, however, and all criticisms are forgotten. Flick through the gears, just because it’s fun to feel how immediately they now engage, and it sounds like a volcano has somehow been contained in a metal bin. Having the engine sitting just behind your ears makes it feel more intimate; you can hear what sounds like gasping intakes of breath between gears. It’s fantastic.

To drive something as savagely modern and yet thrillingly old-school – it’s probably the last all-new naturally aspirated supercar we’ll ever see – is outrageously good fun.

With 100km/h arriving in a claimed 3.2 seconds, a full half-second faster than the Gallardo, and 200km/h in a sniff under 10, the acceleration spins your adrenalin and testosterone into a heady cocktail every time you get into it. And the brakes are astonishing. 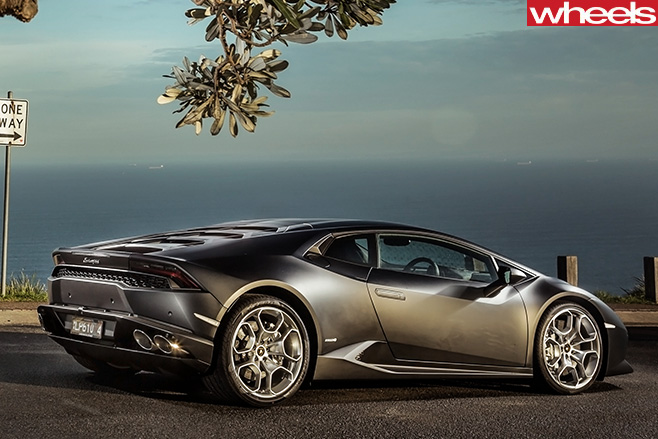 The steering feel is good without being great – of its relatives, it’s closer to Audi than Porsche – but it’s the fact you never have to make any adjustments with the wheel that’s impressive.

When I first drove the Huracan, at the F1 circuit in Shanghai, my driving instructor/racer said it was the first car in which he would choose to leave the electronic programs on because it was faster that way. It allegedly uses the same technology that controls modern fighter jets, which are so fast and darty they’re inherently unstable without computer help. It has three accelerometers and three gyroscopes and its software is constantly monitoring your position in space and time, as well as steering and pedal inputs. The power output to all four driven wheels is continuously adjusted for maximum grip and if you really stuff up, the system will even adjust the steering for you. Disturbing. 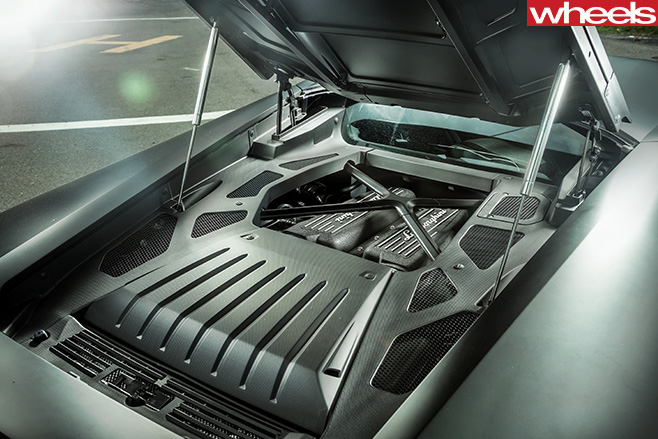 What this means on a track, and even in the real world, is that you can push this car extremely hard and yet feel safe, planted and entirely in control. Driving Gods like Steve Sutcliffe (Wheels, August 2014) found understeer when “turning it up to 11”, but I simply didn’t, because I can’t push as hard as he can, and nor can 99 percent of buyers. An all-paw Lambo will default to understeer if you go hard enough, but you’d have to be really belting it. The grip from the 20-inch wheels is a lot to overcome.

Riding over Australia’s occasionally appalling roads is always a test for something that sits lower than a sausage dog and, sure enough, you simply can’t leave the Anima switch in Corsa unless you know the road ahead will be perfect. In this track mode, even small bumps will hurt your ribs and the Huracan’s nose. On pockmarked tarmac, just choose Strada and take it easy because you’ll occasionally scrape the front-end if you push too hard. 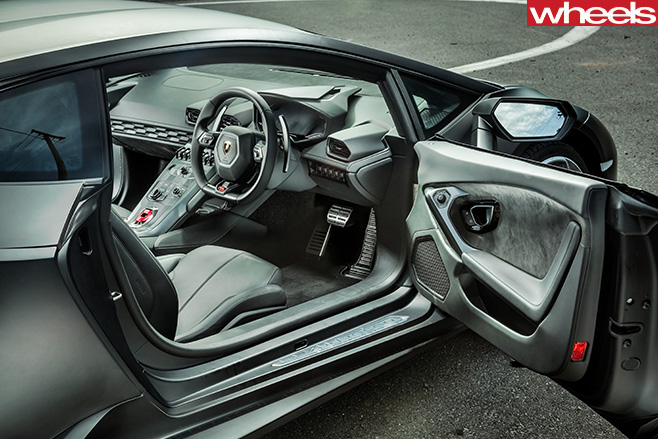 In Sport, the suspension makes some big bangs, but the Huracan is so sorted and its chassis so stiff – 50 percent stiffer than the Gallardo, they say – that even mid-corner lumps won’t seriously knock it off line.

You could live with the Huracan on Australian roads, thanks to the Anima settings and the standard hydraulic nose-lifter, but you’d still want to avoid speed humps. And you’d want to invest in track days because, while it’s fun up to 110km/h, you really want to go faster than that to fully appreciate its genius. 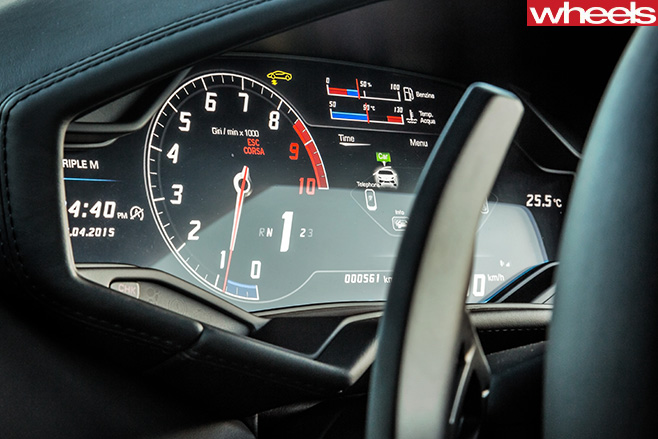 The longer you spend in the new baby Lambo, the faster it feels; you get used to marshalling all that power, and learn to trust how capable the car’s systems are. Occasionally you even dare to push the throttle all the way to the floor, but when using manual mode you need to be wary because it will hit the rev limiter (and scream there without changing up) faster than your reactions believe would be possible.

As you’d hope, the Huracan is utterly thrilling to drive and you get out of it after every journey, even to the shops and back, feeling like you’ve just inhaled or injected something illegal. If this is what being rich feels like, I’m even more gutted that I’m not.

It’s quite a ride from the passenger seat as well. I had one bloke ask me, in all seriousness, whether you needed a special licence to drive cars like this. It really is that far removed from everyday motor vehicles, and a billion miles away from the self-driving EVs and hydrogen-powered whisper-mobiles that seem to be our future. 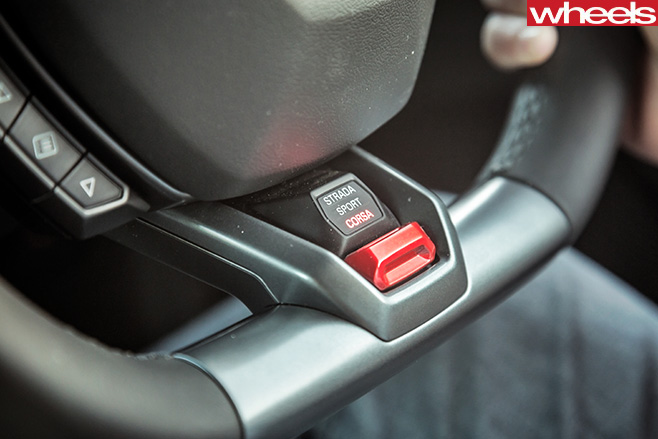 We can only hope that in the non-driving future, legislators will still allow vehicles as impressive and exciting as the Lamborghini Huracan on our roads. The world would be a lesser place without them.

2. Built largely from carbonfibre and aluminium, this new baby Lambo is 10 percent lighter than the Gallardo

3. Huracan is the first Lamborghini produced under new head of design Filippo Perini

The black art of keeping clean 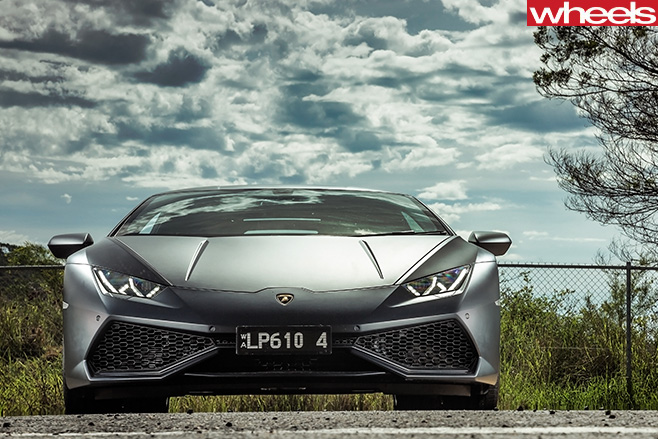 SURPRISINGLY, the question we were most commonly asked while driving our stealth-fighter black Huracan was not “Can I have sex with you?”. It was “How on Earth do you wash that paint?”.

As fingerprints started to smudge up the area around the doorhandles, and general road grime began to affix itself to the matte surface, we also started to worry.

But the good people at the dealership informed us that the matte-black job comes with a special cleaning kit, featuring delicate brushes, special unguents and powders, which you can hand to your servant/mechanic, along with the instructions, and wish him well.