While the original MP4-12C and 650S – which was basically a heavy facelift – both led their segment on power-to-weight ratios, they struggled to deliver the sort of emotional appeal that persuades people to drop condo-in-Bali sums on something with four wheels and no jet engine. 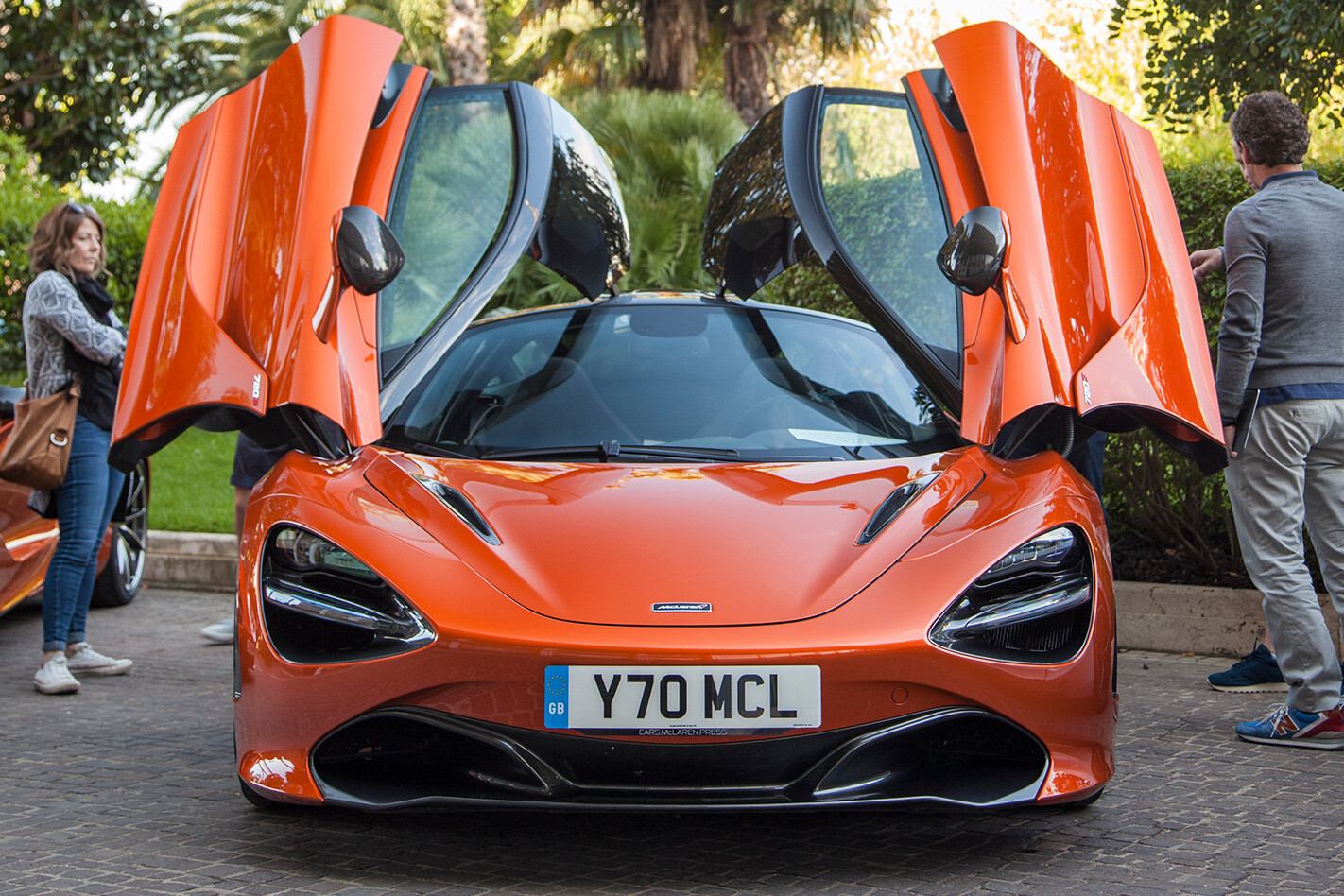 So while the new 720S has indeed become faster and lighter, the more important question is probably around that less immediately measurable metric: how much tingle it puts in your tail.

The fundamentals remain as before: McLaren’s entire road-car program has been built around using a shared architecture to cover everything from the 911-rivalling Sports Series to its million-plus Ultimate Series hypercars. That means the 720S sticks with the combination of a carbon tub and a mid-mounted twin-turbo V8. But pretty much everything has been revised. The new MonoCell II tub now incorporates a carbon upper structure, with the windscreen surround and central roof spar both made from the material. The 650S used aluminium for its upper pillars and screen rail, and all of its structural strength was in the lower tub. The fuller cage adds cost, but has also made the car stronger, allowed for cooler-looking top-hinged doors and trimmed 17.7kg off the bodyshell.

The engine sticks with the evolutionary theme, being a development of the 650S’s V8. Capacity has increased to 4.0-litres and there are new turbos, pistons and crankshaft, plus redesigned cylinder heads. Power rises to 530kW, outgunning the not-exactly-slow Ferrari 488GTB by 38kW. 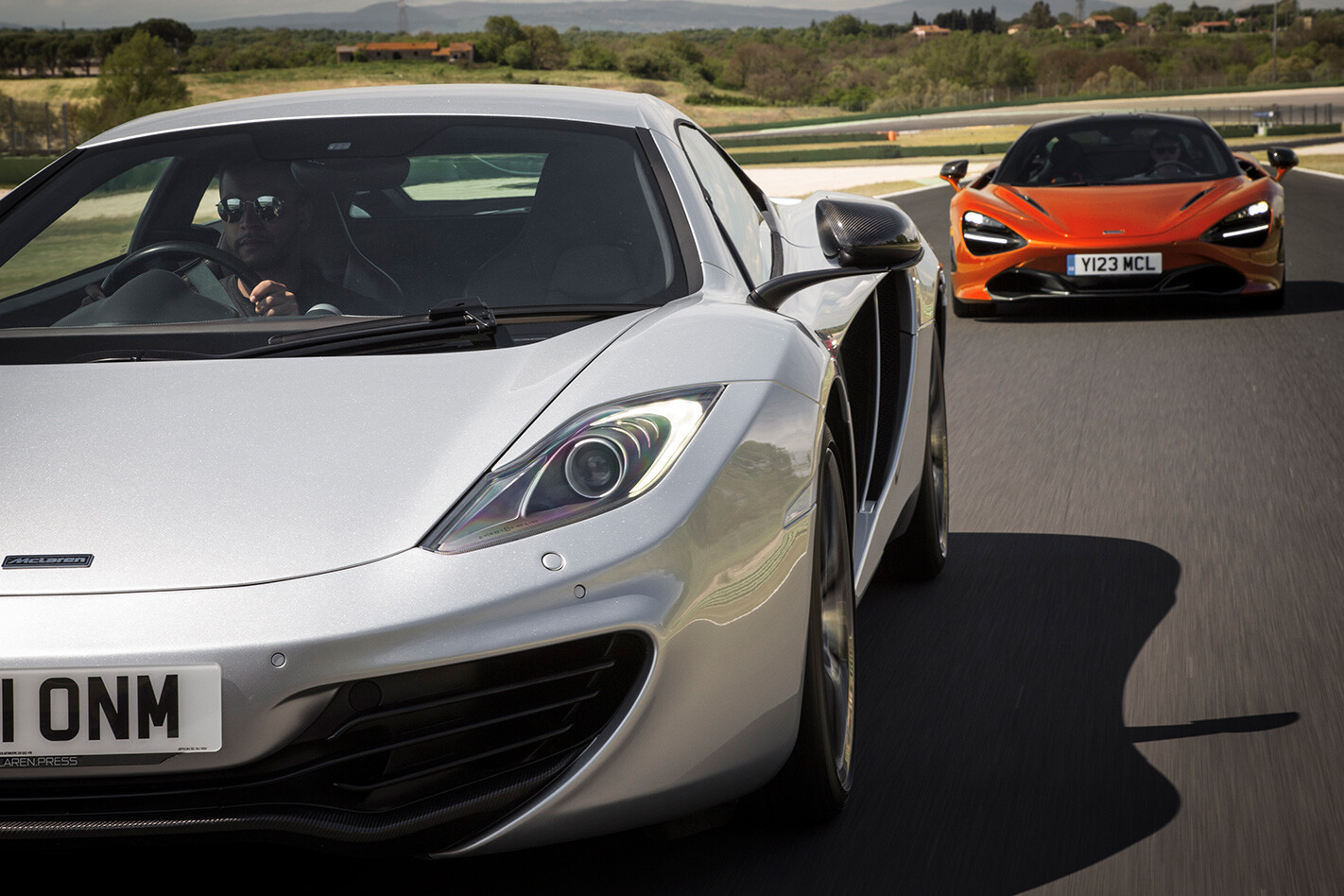 Visual differences are considerably greater; aside from badges you’d be hard-pressed to see much of an aesthetic relationship between the 720S’s muscular form and the slightly bland shapes of the MP4-12C and 650S.

The 720S has lost the side air intake of its predecessors, and indeed of pretty much every other mid-engined car, with air channelled to the engine and radiators through an artfully disguised channel next to the rear windows. It looks great; especially from the rear where – with the deployable wing raised – it does a good impression of McLaren’s P1 hypercar. The headlight apertures incorporate well-hidden air ducts as well as lighting elements, but in lighter paint colours their size and darkness gives the 720S a dead-eyed look, slightly reminiscent of the fish counter. While the cabin works extremely well, it does so in the rational manner of a fighter jet, and without much of the supercar showbiz of flashier rivals. Getting in and out is easier thanks to lower sills and the new wider-opening doors, but the first thing I notice from the driver’s seat is how good frontal visibility is thanks to the narrowness of the carbon A-pillars. It’s the same story to the rear, too, where glazed panels on each side of the back screen pretty much eliminate the over-the-shoulder blind spots that have been as much a hallmark of mid-engined supercars as their owners acquiring much younger second wives.

Switchgear has been rationalised, with most functions – including HVAC – now incorporated into the portrait-style touchscreen in the middle of the cabin. Sadly, this lacks sensitivity and feels surprisingly laggy – but that could just have been down to my sweaty fingers. There is a bit of theatre in the form of the power-tilting digital instrument display, which folds down to reveal a minimal revs-and-speed readout when the car is put into Track mode. 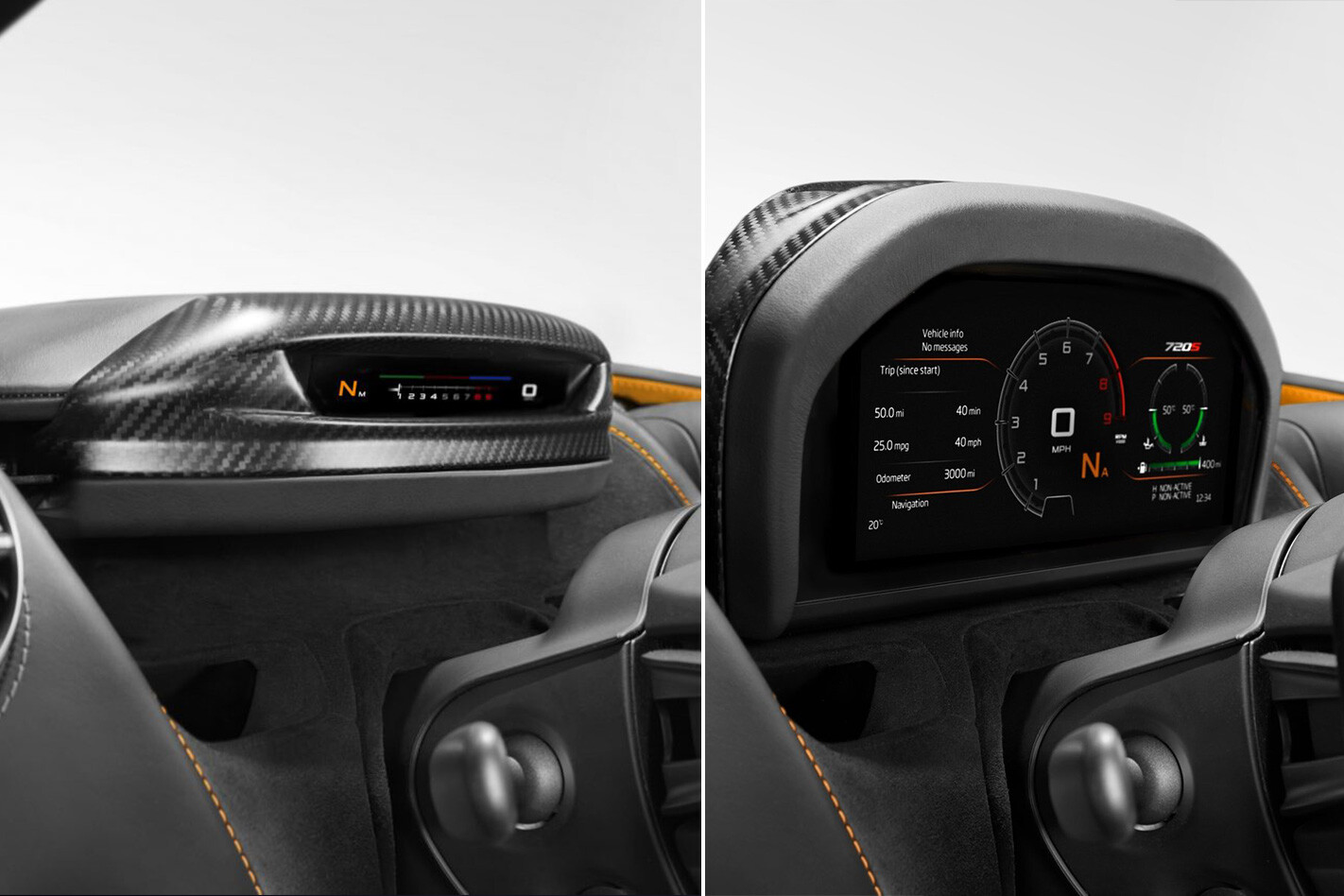 McLaren has previously proved capable of engineering an impressive breadth of differences into its range of cars, all of which share the same core architecture. But the 720S manages to pull off an even neater trick, combining the qualities of pretty much the entire range. It’s a greatest hits collection: as civilised as the 570GT when cruising yet faster than the seminal track-spec 675LT on a circuit. This is a car with more bandwidth at its disposal than Telstra.

First impressions come close to underwhelming. Both of the dynamic mode switches – one for Powertrain and one for Handling – now have Comfort mode far-left in place of the previous Normal, and with this engaged the 720S becomes almost too civilised – the ride is exceptionally pliant, even on the lowest quality tarmac of the Italian launch route I could find, the dual-clutch gearbox does a good impression of a slusher auto and the engine delivers solid urge without raising its voice. It feels a bit too effortless for something so supposedly potent. 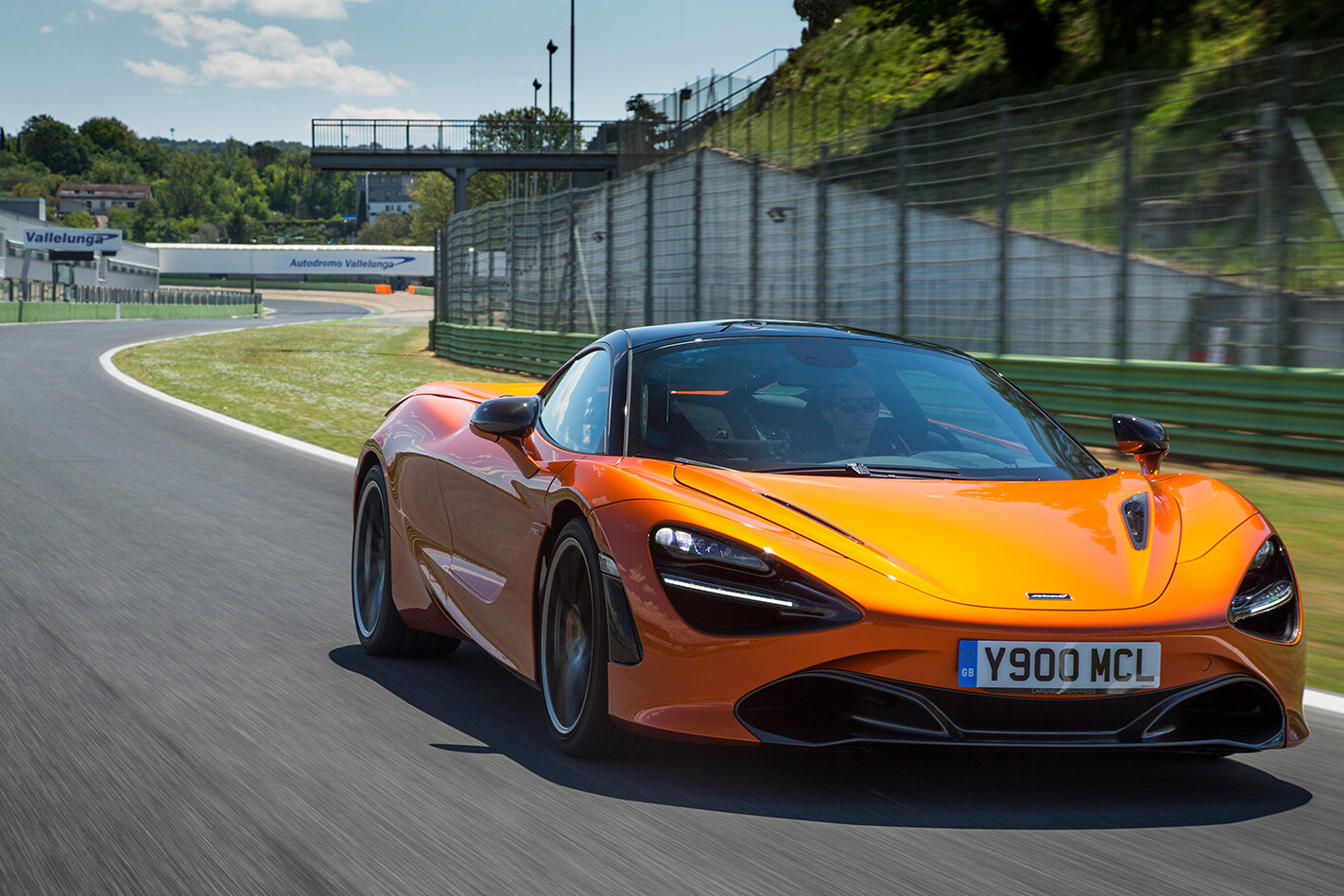 Don’t worry, the furniture-chewing side of the 720S’s split personality is never more than a flexed toe away. This V8 feels slightly more turbocharged than the 3.8-litre unit, the forces are higher and it takes a fraction longer to gather momentum, especially with less than 3000rpm showing on the tacho. But once on boost it pulls like it should be wearing numbers on the doors. The engine is happy all the way to the 8500rpm limiter – deliriously so – but although it sounds better than its predecessors, it still lacks the vocal range of the Ferrari 488 or (especially) the Lamborghini Huracan.

The steering is superb. McLaren has stuck with hydraulic assistance and the wheel retains much of the low-speed chatter that electric systems filter out as unwanted noise, while weighting up nicely when required to deliver real grip-or-slip feel. While the toweringly high limits will rarely be encountered on the road, the Macca still delivers plenty of sensation when being given a moderate dose of whip. 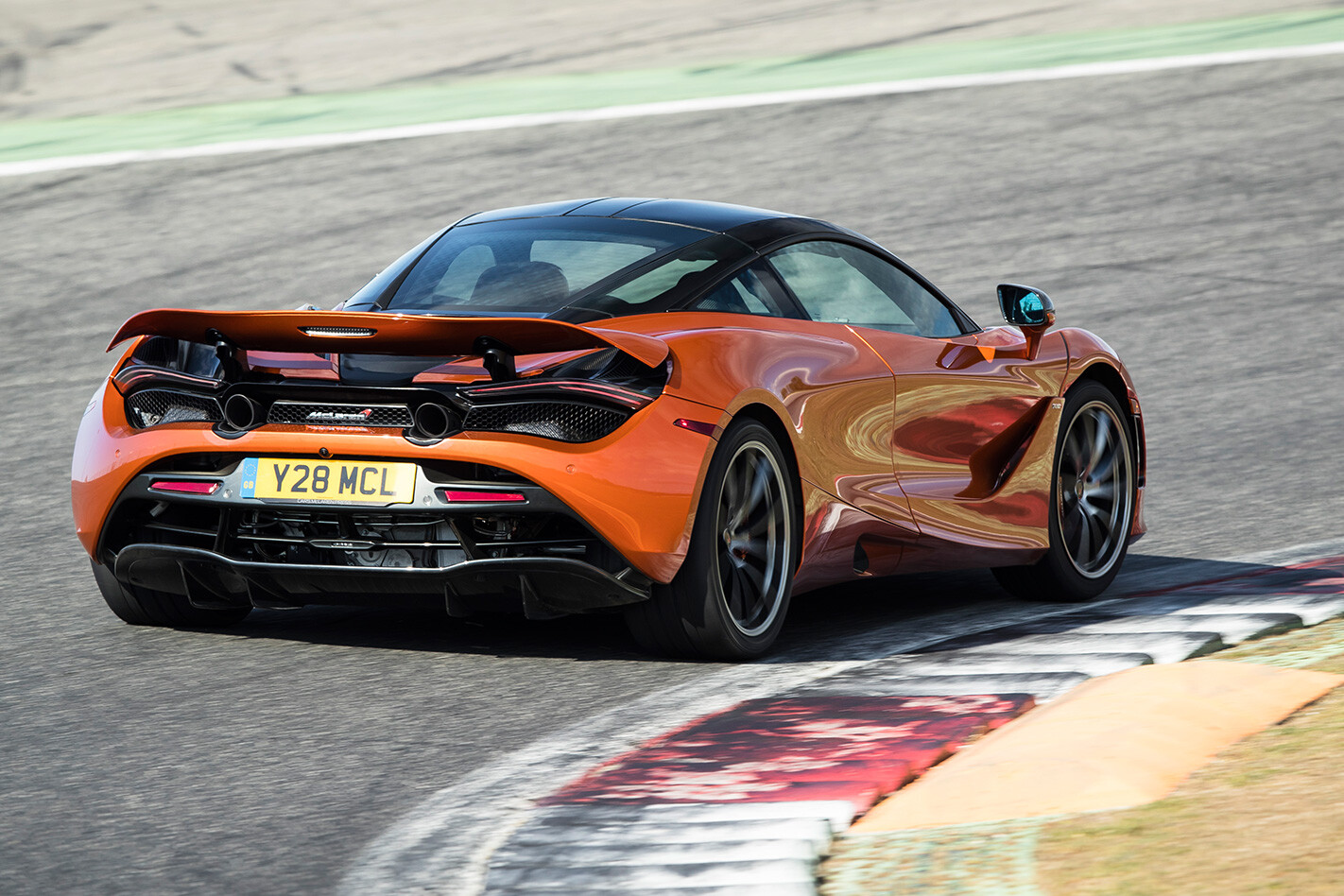 But to experience the 720S at more than a scant percentage of its potential it needs a track. Which is why McLaren laid on the Vallelunga circuit near Rome. Faster use confirmed it could compress the track’s longest straight as easily as it squeezes internal organs into interesting new shapes under both longitudinal and lateral loadings.

It can’t match the hair-trigger response of the 675LT, which was pretty much a road-legal racer, but it does feel much more stable under braking and less skittish under power, lapping at huge speed while barely breaking a sweat. It can generate smoke for the cameras on demand – there’s even a drift mode for the not-so-handy – but its greatest skill is just going enormously quickly. Haydn Baker, the 720S program manager, says that his car is actually faster than the 675LT on track, and would even beat the 673kW McLaren P1 around most circuits.

That fact alone sums up the astonishing rate of progress Woking is making.

But is this the car that you lust after above and beyond any of its rivals? The 720S has certainly earned its spot on any lottery wish list it finds itself on. It’s more involving, more exciting and better looking than the 650S, a technical tour de force that offers an unprecedented spread of skills.

It might not excite quite the level of emotional passion of its Italian rivals, but there’s little doubt it will spank them on track in a fair fight.