These three 12-cylinder ultra-sedans are all vying for space in the garages of the wealthy.

But while their trademark grilles seem to be sniffing the same lucrative niche, they differ dramatically in approach, ambience and appeal.

The Bentley is an old-school five-seat sportster, fusing a classic interior with a high-performance chassis and drivetrain. The S600 L may look like a sharp-dressed S300 but its spec list includes every high-tech detail from the Benz catalogue. And the Ghost II packs the dynamic talents of a properly engineered plaything under its status symbol exterior. 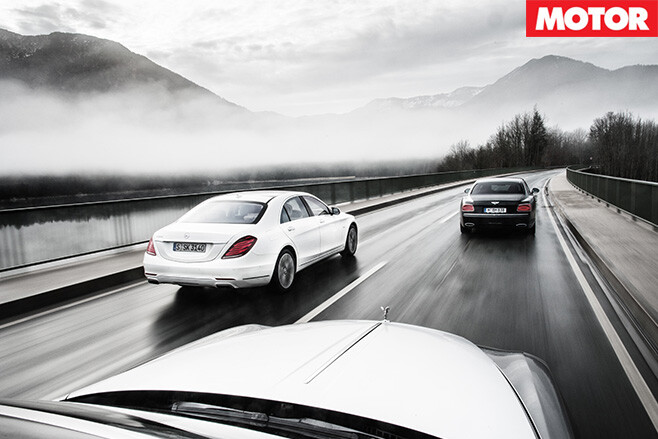 An early morning blast down the Munich-Salzburg autobahn proves that design intent can’t change the laws of physics, however, and all three fuel gauges fall faster than – ironically enough – the price of oil.

The recent facelift can’t hide the fact the Bentley’s the oldest car here. The slimfit interior comes despite a length of 5300mm, the stiff suspension has been set up for surefootedness at speed, and the 2.4-tonne weight suggests the body hasn’t heard of the carbon diet.

The driver’s seat is hard and lacks contours and adjustability. The beautifully finished antique interior lacks standard shift paddles, the latest driver aids or contemporary infotainment. But you’d have to look long and hard for a luxo-barge that gets you from A to B faster than the Bentley. 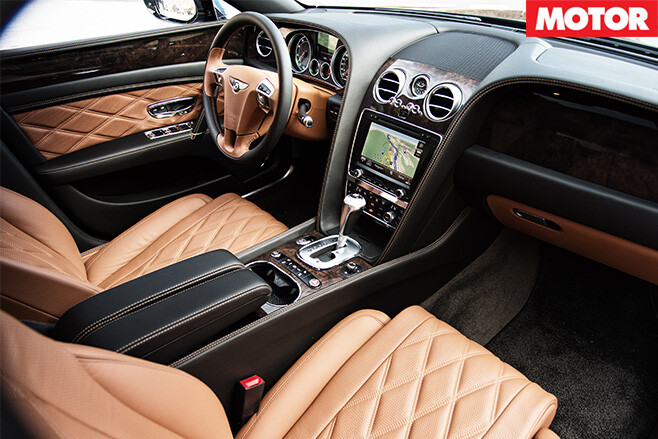 For substantially less money, the S600 offers more equipment, a more supple ride and much more cabin space. On the highway to Austria’s Tyrolean Alps, the big Benz is the easiest car to drive hard.

Matching the Bentley in length, the S600 is notably roomier inside, its seats are complex and comfortable, parking is fully automatic if you desire, sat-nav is governed by real-time traffic info, on-demand surface heating extends to the door panels and the centre console, and the intelligent light system outshines its rivals for diversity, range and response. Yet despite the cossetting interior and full suite of driver aids, it remains a commendably involving drive. 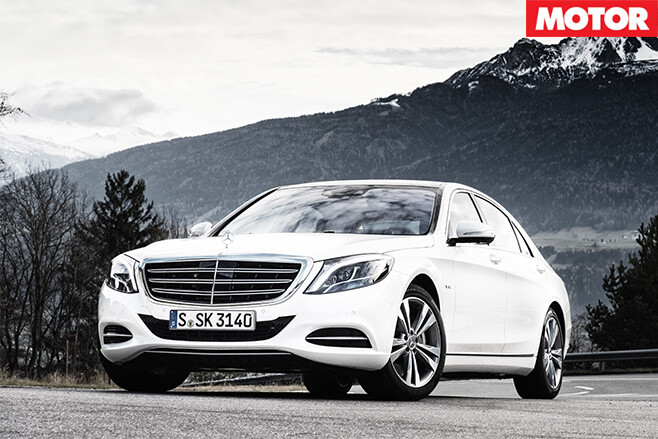 Unexpectedly, similar praise applies to the Ghost II. What makes all the difference here is the optional new Dynamic Driving Package that works surprisingly well with the relatively petite 19in Goodyear Ultragrip snow tyres on the test car.

Quicker steering operated by a thicker-rimmed wheel, revised struts all ’round, tauter hydraulic rear suspension mounts and recalibrated shock absorbers were all it took to add a welcome dash of precision and an extra dose of ground-hugging ability.

The slight slack around the straight-ahead position that made us frown at high speed in earlier Ghosts has all but disappeared; body roll and brake dive are better suppressed and, despite the mass and momentum, the Series II feels more confidence-inspiring when pushed. 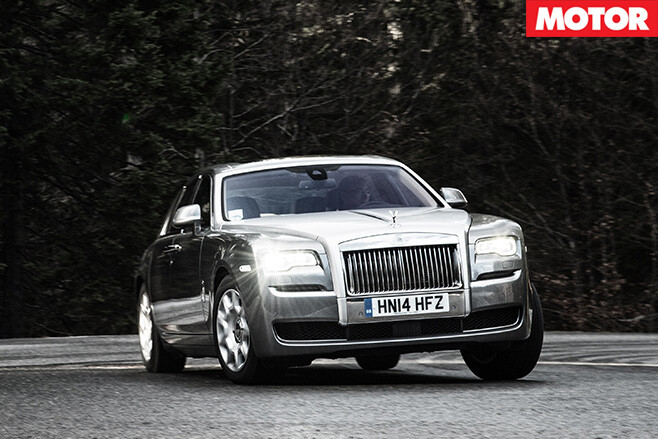 The update also brings high-intensity LED headlamps with integrated cornering lights and progressively auto-dimming glare-free main beams. Inside, other than more supportive seats, the cabin’s virtually unchanged – so there’s still that silly ‘power reserve’ gauge instead of a proper tachometer.

The mountain range linking Bavaria and Austria spoils visitors with a network of challenging tarmac – twisty B-roads, passes and rural byways dotted with single-track sections. Whenever a mix of tight corners and steep climbs ups the ante, the Flying Spur steps to the fore.

The only car boasting four-wheel drive, it is virtually unbeatable in terms of traction and grip, and with 800Nm dished up by the 6.0-litre W12, quickly gave the Benz and Roller nightmares about swiftly vanishing Bentley tail-lights. 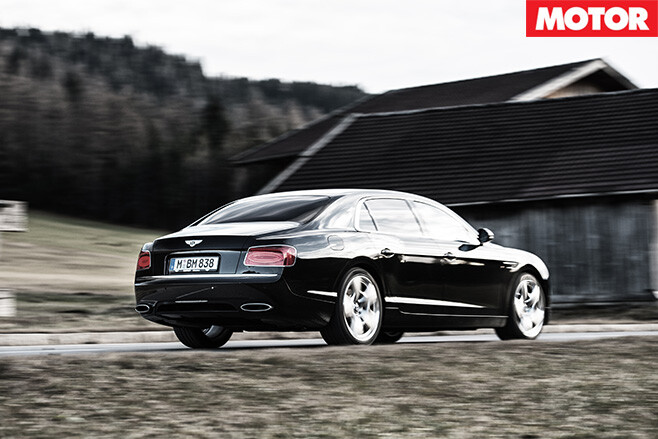 The only limitation is the lack of fingertip controls for the eight-speed automatic; on fast downhill sections, even the immensely powerful composite brakes sizzle under the pressure.

Dynamic Driving Package notwithstanding, the Rolls simply prefers a more leisurely pace and in this illustrious company that’s more obvious. With ESP on, the Ghost in the machine keeps control so the glasses on the rear picnic tables stay put.

Switch ESP off, however, and you find yourself manoeuvring the Titanic through iceberg alley. There’s sporting ability but Emily (the R-R bonnet mascot) isn’t an outright competitive spirit and as the roads narrow, so the Ghost prefers to ease off. 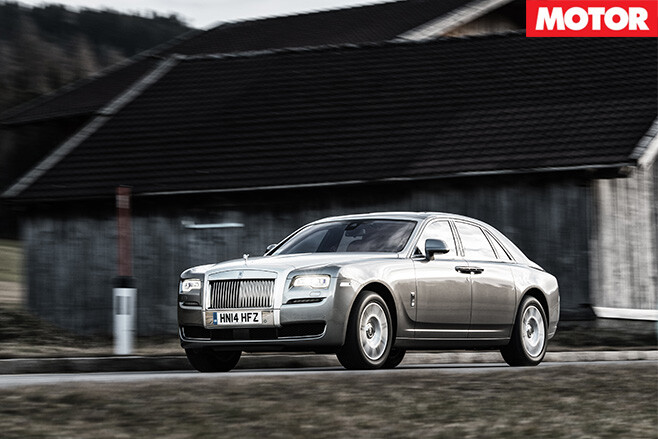 It’s at its best surfing the 780Nm torque-wave that crests at a shallow 1500rpm, and rewards smooth steering and less aggressive right foot input. It even uses its sat-nav to avoid superfluous gear changes. It pays back with total refinement and – pardon the cliché – splendid isolation.

To confirm that 12 cylinders make the smoothest powerplants money can buy, we put them to the test, balancing a €2 coin upright on each engine at idle. The coin stayed put every time. True to the character of the Bentley, the W12 is the sportiest. It sounds gruff on overrun, hoarse at full song and quite sonorous at part throttle.

Eager to rev, the UK-built engine needs 6000rpm to deliver all the goods. It redlines at 6200rpm, just like the 6.0-litre kraftwerk from Stuttgart, but the Benz spreads its peak power from 4900 to 5300rpm. Developed and manufactured in Munich, the V12 in the Ghost is singing strong at 5250rpm, its seven-speed ’box working with exceptional smoothness and underlined by the absence of shift paddles or a choice of drive programmes; in the Benz, you can change gears with your fingertips or lock the software in dynamic mode.

The Spur boasts eight speeds and the extra ratio is useful, helping spread the rev and speed bands. Like the W12 fitted to the Spur and the 6.6-litre V12 shoehorned into the 5400mm Ghost, the S600’s V12 isn’t exactly new, the three-valver harking back to the 5.5-litre V12 shown in the Maybach 57 in 2002. Such high speed rarely matters, but handling and roadholding always do, and the Benz struggles now and then to beam itself out of corners. While the S63 AMG is available with 4Matic all-wheel drive, the more comfort-oriented S600 is not, so ESP gets in the way when you’re trying to keep up with that Flying Spur.

You would expect cushy rides, effortless drivetrains and competent suspension from these, and you get that – albeit to differing degrees. What may come as a surprise is the stopping power of the brakes. All employ manhole cover-size discs straddled by roadtrain calipers.

With optional carbon-ceramic rotors, the Bentley (on 21in Pirelli P Zero summer tyres) combines powerful deceleration with progressive pedal feel and absolutely zero fade. The S600’s 300kg advantage pays off with a shortened stopping distance and quicker responses. Even the Rolls-Royce boasts potent and neatly balanced stoppers – like its two-finger steering, the brake pedal only needs a touch to deliver. Another forte these behemoths share is unerring directional stability. All three were virtually immune to crosswinds, foul weather and sudden surface variations. Fast corners were rarely an issue either, though our 36-cylinder convoy had to use the brakes hard for tighter corners.

Luxury has many facets, and these three have it all covered. Space? The German is hard to beat, second-row accommodation combining ample leg and headroom with active massage seats that do everything but the dishes. Equipment? Top honours again to the Benz as it doesn’t charge extra for most of the goodies.

Ergonomics is a narrow win for the BMW-inspired Rolls Royce, with a bespoke and improved version of iDrive. The cockpit of the S600 is loaded with touchpads, knobs, buttons and thumbwheels, but the maze is hard to decipher, and some details are questionable. If you like overkill engineering – motorised buckles, airbags for the rear belts, perfume dispenser – you’ll appreciate the Mercedes, but if a gentleman’s club is more you, the tastefully-appointed Bentley may be the right choice.

But to make a statement of real presence and affluence, nothing beats the dramatic front-opening, coach-style rear doors of the Ghost, the inviting theatre seats and the remarkably tasteful yet functional cockpit.

If you’re in this market, economy isn’t going to be your deciding factor but we can’t ignore the cash angle altogether. First up, fuel consumption. It took a hammering as soon as we gave our thoroughbreds their heads; the Mercedes averaged 16.0L/100km, the Ghost II gave a touch over 19L/100km and the Bentley drank 20.5L/100km. 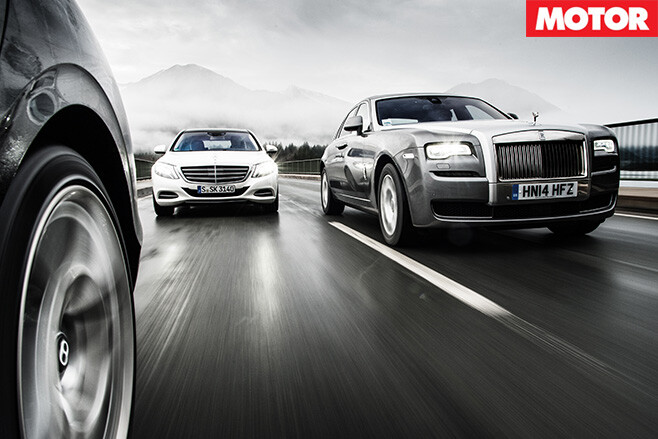 These numbers include a high proportion of high-speed motorway work, some hard driving for the camera, and no time-wasting in between. Obey speed limits and it’s possible to improve the numbers by up to 50 per cent.

Much harder to improve are the terrifying list prices. Least expensive is the Benz which retails at $417,500 heavily kitted out. The Bentley is $423,160, but get tick happy with the long options list and it’ll balloon considerably.

Your local Rolls-Royce dealer will liberate $545,000 from your wallet for a Ghost in base trim but, like the Bentley, it’s a cinch to send it sky high with options. Even so, 82 per cent of R-R customers option their purschases to a level a quarter more expensive than the already huge base price. 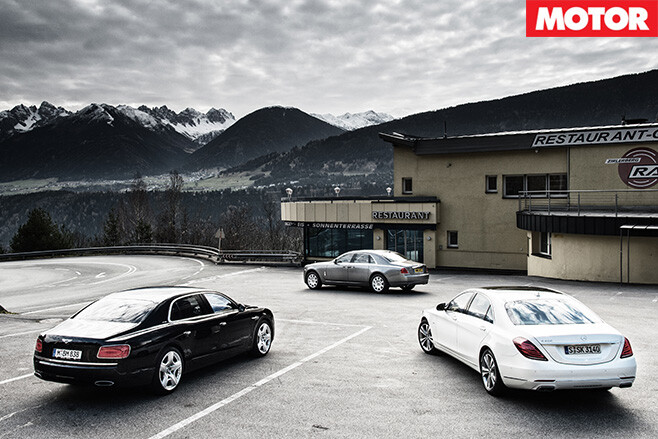 So where would my lottery win go? The head says Benz. It is the cleverest high-end saloon by a long shot. It spoils you with a bouquet of creature comforts, is an involving fast-lane cruiser, and leaves enough dough in the kitty for a holiday home by the sea.

Jekyll and Hyde types may fall for the Bentley – it’s two cars in one, a stylish four-door sports sedan, and a purveyor of traditional British craftsmanship that appeals to customers who deem a Jaguar XJR too mundane.

But the gut reaction would almost certainly be the Ghost. Why? Because if you want the best of the best, the most extroverted and prestigious, you might as well go with the car that shouts: ‘Look at me!’ the loudest.