When Dave Grohl's not rockin' out on stage, he's chillin' out in his Falcon van.

IF YOU don’t know who Dave Grohl is, the names Nirvana, Foo Fighters and Them Crooked Vultures might help. Still no idea? How’s life been under that rock for the past 20 years?

When it comes to his choice of ride, however, you could be forgiven for not knowing what this is. After all, we never got Ford Econolines over here.

And this isn’t an Econoline.

Even the man who built it, Troy Honeycutt of King T’s Kustoms, didn’t know what a Falcon van was until Dave asked him to build one. So we figured we’d have a chat with Troy and learn a thing or two. 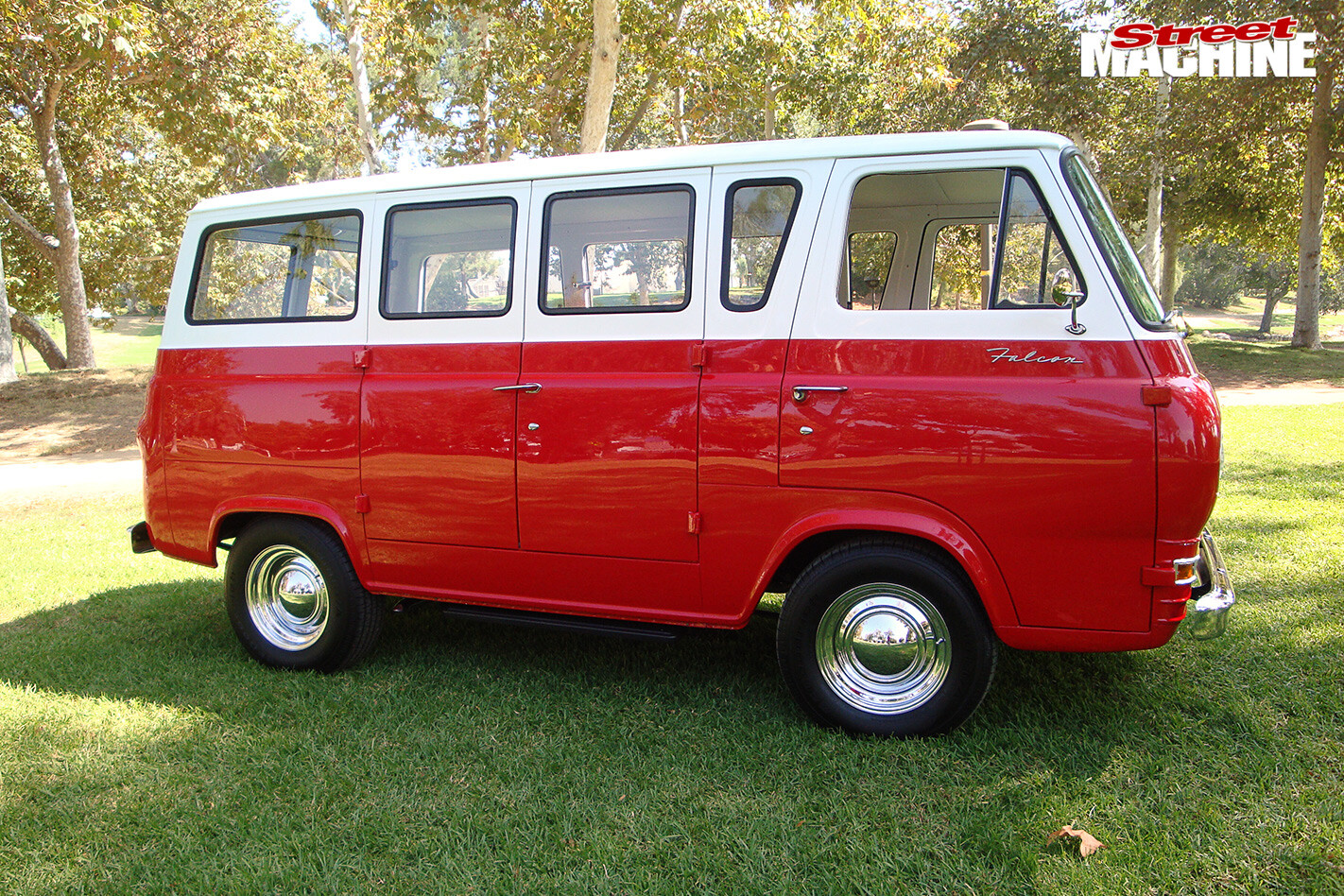 Troy, first of all it’s a beautiful build.

Thanks! You know, I’ve always liked them. I grew up around the custom car scene and my grandfather had an Econoline. I told him I wanted to buy it off him. He had a ’63 van and a ’65 Mustang but by the time I was old enough to drive, they were just wrecked. Jump forward to 2010 and Dave was talking to another parent at his daughter’s school, showing him pictures of his van. Turned out that guy had a ’66 Mustang that he wanted to rebuild. Dave said he should come to me, so I’ve ended up pretty much doing the two cars I wanted when I was a kid.

So it’s all Ford for you? 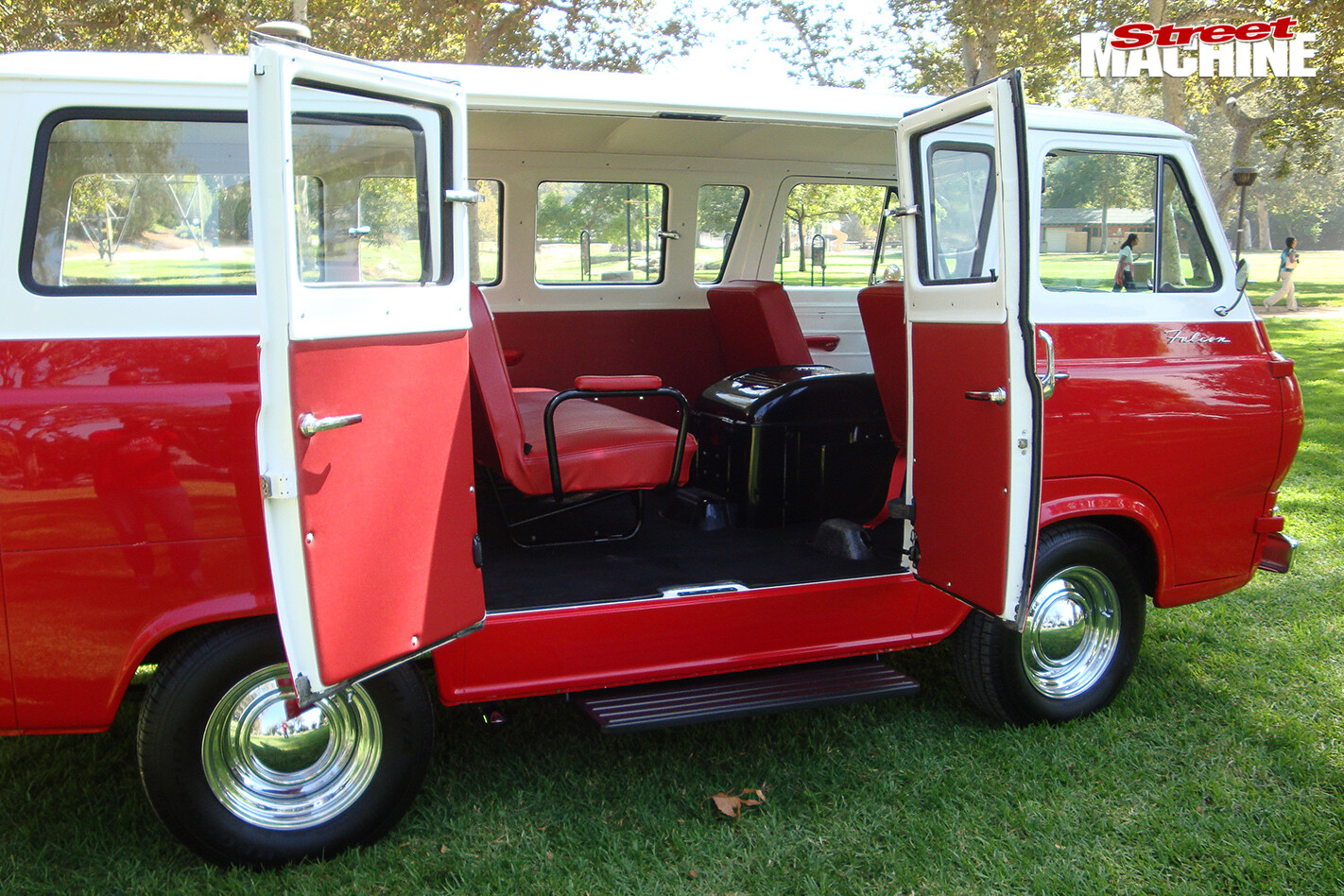 How did you come to be building a rock star’s van?

I have some history in the music industry — I used to run a couple of clubs. Then I had a bike shop and a lot of music industry people became customers. I’d go to a lot of shows and one year it seemed like the Foos were playing every other weekend. We were introduced at Velvet Revolver’s first gig. We spoke about bikes — he had a Valkyrie or something; I was like: “No way man, you’ve gotta get a Harley!”

He ordered a Harley but it hadn’t arrived and Q magazine was doing an interview. They wanted a chopper so he called me and I took a bike down. From then it was pretty much on. He bought another bike and another.

In April 2008 Harley-Davidson wanted to do a feature with Dave and his bikes. He called me and said: “Can you sort out my bikes? I’m building a studio at home and they’ve been outside for a while.” Man, they were a mess!

About a year and a half after that he said: “I want to build a van.”

So it was his idea to do a van, rather than asking you for something weird?

Yeah. He told me about the Falcon van. I knew the Econoline but I didn’t know they ever made a Falcon. He’d missed one on eBay but he sent me the link. He said it had to have a lot of windows and when I looked at the link, I saw what he wanted.

I’d already been looking at box vans, and I started telling him we’d do it with murals, bubble windows, a bed in the back but he said no, it had to be first generation and look bone-stock but be all new, and it had to have windows. He didn’t care if it was Chev, Ford or Dodge.

Was it easy to find one?

They’re not super-common. I looked all over the western region, I joined van clubs online and I looked at seven vehicles in a month and a half but most were beat to shit. I wanted to get him a Falcon because I remembered something he’d told me: when he first had money, he went out and bought a bitchin’ old car. He called his mum and said: “I bought a black ’63 Falcon.” She told him that her first car was the exact same thing, so that said to me that he had to have a Falcon van. By now, Dave was tired of waiting and he was hassling me. I’d found a Dodge Sportsman in Arizona that was described as a ‘Californian van’ — that means it’s been in a dry climate and should be in good condition — so I flew out, intending to drive it home.

As soon as we pulled up I could see the cancer. The windshield was about to fall out. I was livid but my friend, Nelson, dragged me away.

I’d seen a Falcon for sale in Arizona too but no photos — the guy wasn’t computer savvy. Nelson said I should call, so I did and about two hours later he called back. By then I’d had a beer and calmed down. The Falcon was about 60 miles away so we drove out there.

It was literally in the middle of the desert with three flat tyres but I knew this was it. We threw some gas in the carb and it fired up even though it’d been sitting for eight years. We did a deal, sent it to Nelson’s house and I made the last flight home. Dave called and said: “How’s it going?” He thought I was driving the Dodge home but he was ecstatic when I told him I’d bought him a Falcon.

We saw the van at the Grand National Roadster Show. Did Dave set out to own a show van?

No! He said: “I want something reliable that I can take my family out in.” I’ve built four bikes for him and I know what he’s like — he gets a favourite and the rest get ridden once or twice. I was worried that I’d work my arse off on this and he’d never use it. I even said so to his manager but he told me: “You’re wrong — Dave’s really excited about this and he’ll drive it all the time.”

Oh yeah. I was at a Harley dealership the other day and one of the guys said that Dave had come by and taken him out in the van. He drives it a lot. 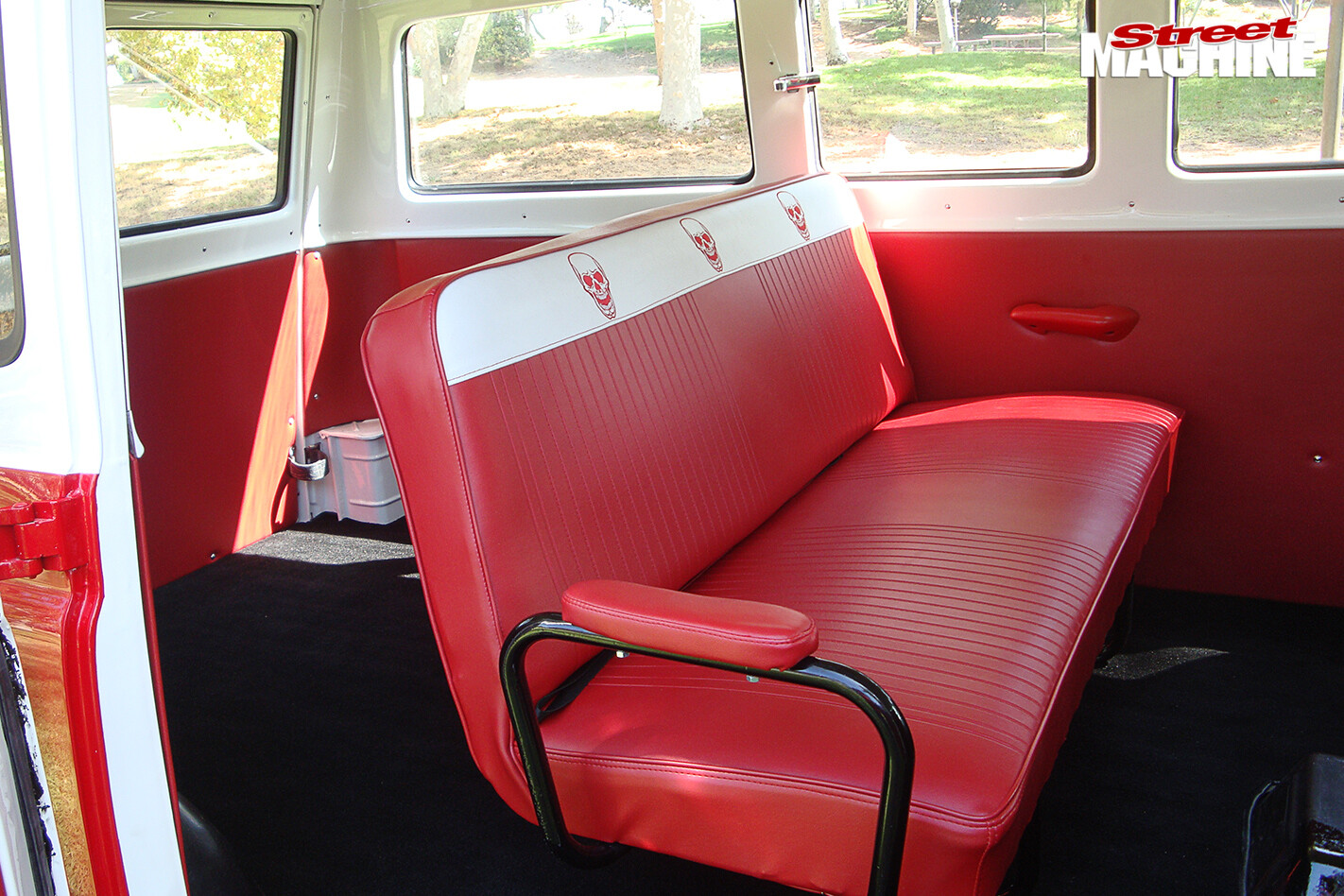 Cool! But did it take a lot of work to make the desert-find driveable?

Well we knew that it was going to be V8, auto, disc brakes and power steering if possible, so all that stuff didn’t matter anyway. These vans are unibody and it was sound, the suspension looked good. We could have run the 240ci six that came with it. [Laughs] At times I wished we had — the 302 was a lot of fun to fit!

The windshield was cracked and all the rubber was done. The only bad thing was a dent behind the rear passenger door — the door wouldn’t shut — but my body guys worked miracles. At the GNRS people came up and said: “These were never this straight from the factory.” That’s hard on such long panels.

These vans had optional trim panels and fibreglass window dressings. This one didn’t have it but the guy had all the parts and offered them to me for free. I turned it down but Nelson said I should take them anyway, and I’m glad he did. We fixed the original fibreglass and used it. The trim became stencils to make new panels, which were padded and wrapped in vinyl. Those panels are like 12 feet long and I work alone, so I had to get some help fitting them. I had to drill 350 holes to fit the interior. Plus, with a build like this, you’re constantly test-fitting and removing things. 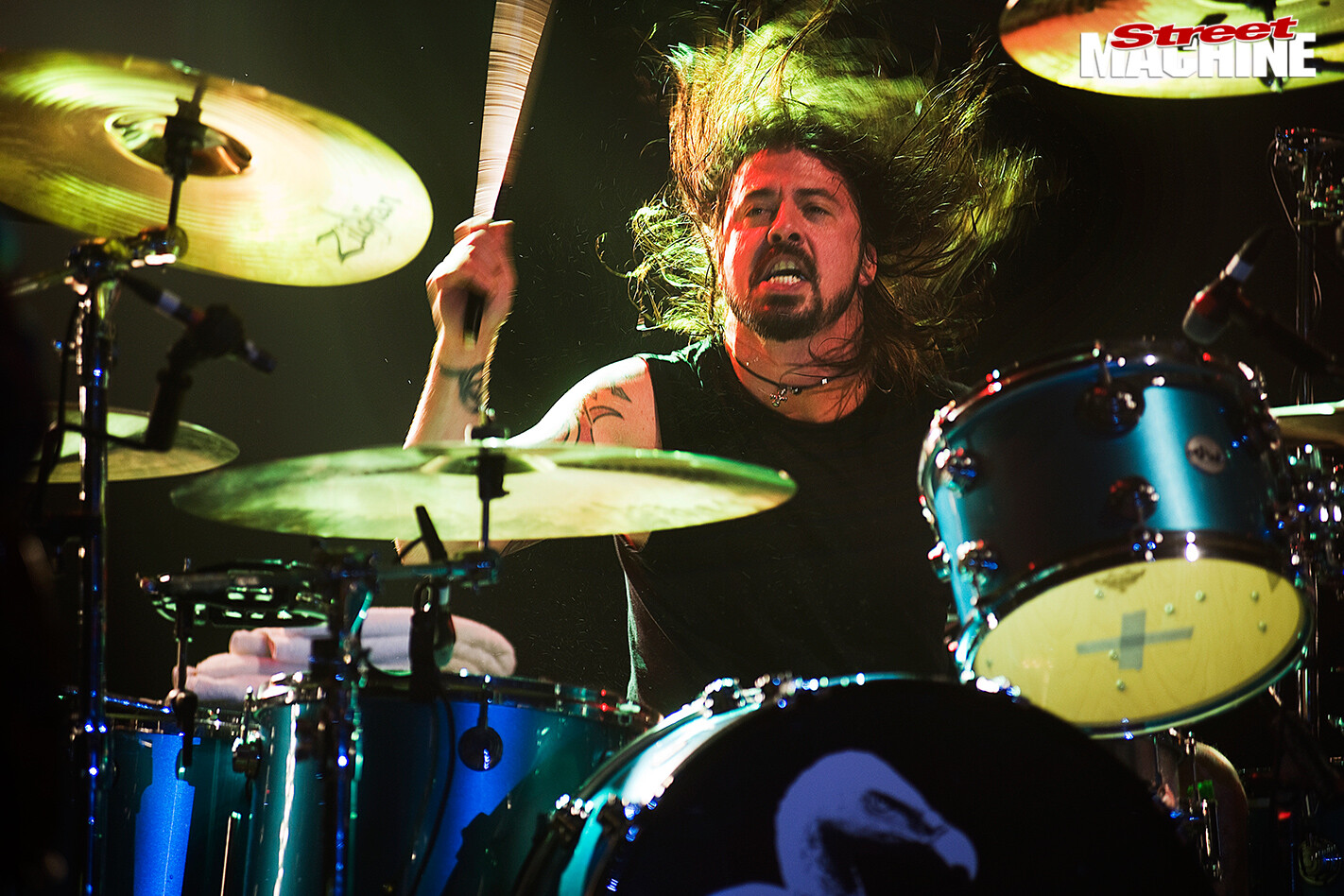 How did you go getting parts for it?

There is nothing available for this red-headed stepchild! The power steering is from a Toyota 4x4, it’s got disc front brakes but no power booster as there was no space. The wheels are 15in to fit over the brakes, the suspension has all new leaves and bushes, there’s a stock nine-inch diff and the whole undercarriage was powdercoated satin black.
I added carpet and made a custom headliner — the stock cars never had them. There’s padding in the roof too, to cut noise and keep the heat out in summer. It’s really quiet in there now and we managed to fit a/c where the heater was, so it’s cool. There was an optional dash skirt and I got a repro and put the vents in that — they’re like ’67 Camaro style vents. The only thing I cut in the body was a hole for the a/c control switches.

I found a bench seat for the back as it didn’t have one. In fact there are mounts inside for two benches but Dave only wanted one. Luckily, it had the buckets so I just had those fixed up.

I tried to make the gauges work but they were just too old. The speedo is from Speedhut in Utah. They had the only one that would fit the standard gauge cluster — it’s 4¼in. The small gauges are Equus. I left the original radio face in place but cut the back off; we needed the space for the a/c. The controls still move the needle and it lights up when you put the lights on but the real stereo is hidden in the glovebox.

When you open the side door, a step pops out from underneath. That’s factory. It’s connected to the door mechanism by a rod. It’s really slick.

3
302ci in a 240ci pot. Troy says if he had to do the V8 conversion again, he'd stretch the dogbox for space and better airflow

What about the V8 conversion?

I joined an online Econovan group and asked about that, as there was no V8 option with the first generation. It wasn’t simple but the 240 crossmember was adaptable — we shaved the mounts and added 302 mounts. Ford did a really clever thing; all the bellhousings are the same so the AOD went straight on. You don’t get that with GMs. The AOD is a lot longer though, so the driveshaft is hilariously short now.

There’s a Zoops serpentine system on the 302. It sits within the frame of the engine, so I knew it would fit in the dog box.

And did the original really have the engine under a lid between driver and passenger?

Yeah, the engine dog box is unmodified. It’s five pieces so I took it apart, powdercoated and Dynamatted it all. Some people said you couldn’t do the V8 without modifying it, others said you can but you shouldn’t. If I did it again, I’d make it bigger — for airflow and manifold choice. 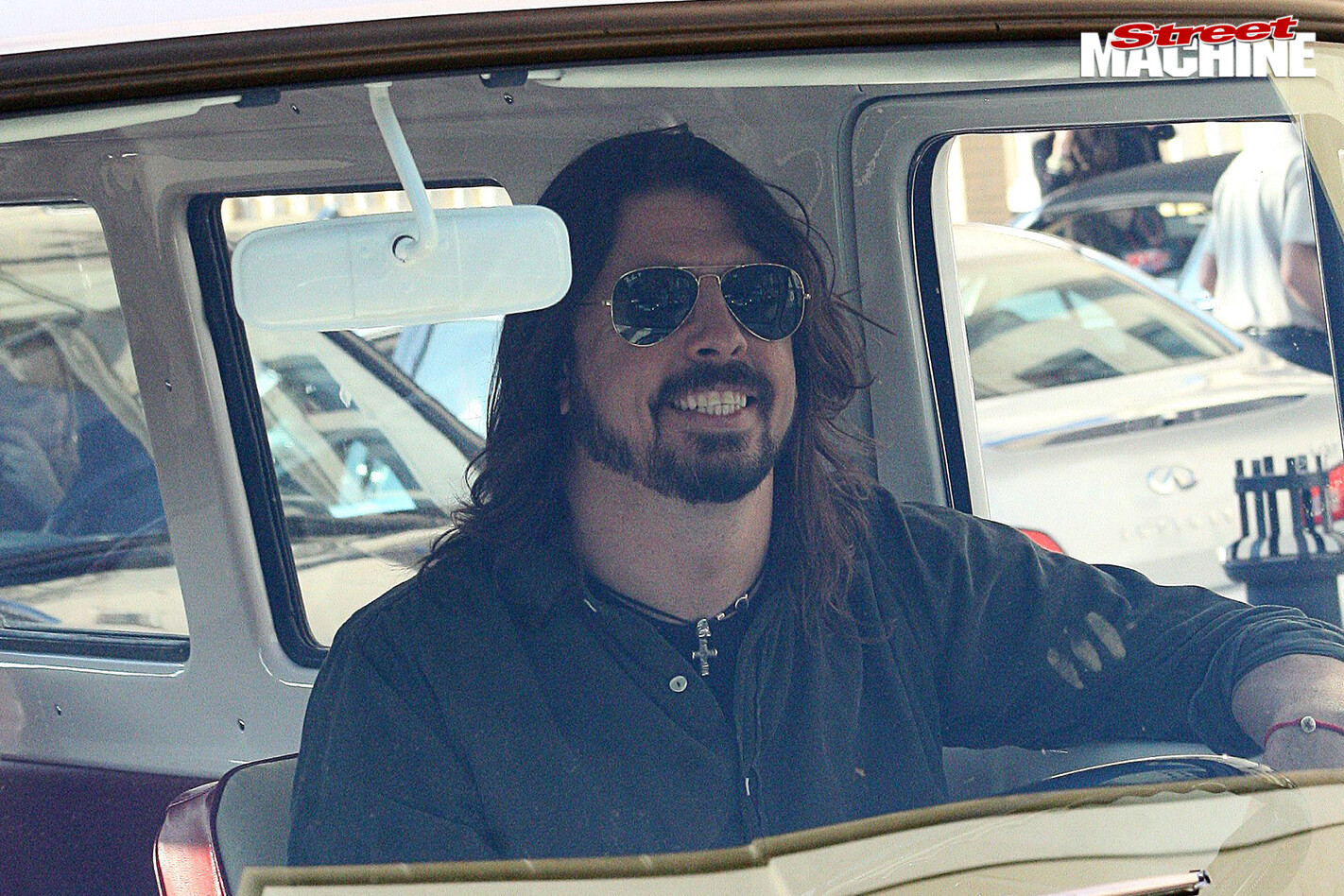 A friend brought a few manifolds over and we tried them until we got a good fit. The driver side is an early Falcon 263 and the passenger side is a ’65 Mustang with some mods.

The engine position is terrible — they moved it forward in the second generation. The radiator is at your hip. There are holes in the front to feed air to the engine but the bumper covers half of them. I added a scoop underneath to get more air in.

At first we ran the 240 radiator and a Taurus two-speed fan but it wasn’t enough so we got a four-row alloy radiator. Dave says it’s great now.