THERE’S a pocket of industry in south-eastern Melbourne with deeper significance to the Australian motoring story than it lets on.

Long before Holden Special Vehicles called it home, this site in the suburb of Clayton produced thousands of cars every year to get Aussies mobile.

Volkswagen built the walls and paved the way from 1954, Nissan and Datsun took over in the 1970s, before the baton was eventually handed to Volvo who let the site fall silent in 1988.

HSV picked up the torch in 1994 and more than two decades later began assembling the vehicle Australia will forever remember as the high water mark for locally made cars – the HSV GTS-R W1.

The race-derived super-sedan is the most extreme thing to leave the Clayton facility in its 63-year history, and while the last examples of HSV’s masterpiece were still rolling down the line, Wheels snuck behind the roller door to find out exactly what goes into building each one. Our chaperone was Andrew Purcell, an HSV man of 21 years and the brand’s Technical Liaison Officer. The original VS-based GTS-R was mid-production when he started; the 13,000sqm workshop a sea of ‘Yella’ paintwork. Back then the company’s entire inventory could fit under the one roof and just three workstations – mechanical, electrical and bodywork; each with a single operator – could turn a Commodore into a HSV.

Today, the operation spans three buildings and an undercover car park with more than 400 cars on site. Transforming a VFII into a W1 takes 15 separate processes, a team of people and roughly six days to complete. Typically, about 80 production staff assemble 15 to 18 vehicles per day in this big, ageing shed. That number swells to 25 at times like this when demand is peaking. The workshop is a hive of productivity.

Donor vehicles ordered months in advance have been arriving en masse from Holden’s Elizabeth Vehicle Assembly Plant (VAP) in the weeks leading up to its closure. As always, they appear as complete ADR-compliant cars wearing raw black bumpers and temporary steel wheels painted bright orange or green. It’s a humble beginning. Only a small ‘W1’ written in paint marker on the windscreen indicates their destiny. Each body arrives with its final paint colour applied, and most of the HSV-specific interior trim already installed on the Holden production line. In fact, Purcell estimates that production efficiencies saw up to 50 percent of HSV componentry handled at the Holden VAP, including installation of the 6.2-litre LSA V8 engine that starts life in all W1s before its extraction at Clayton.

That’s the big W1 production challenge. Every other HSV has its one and only engine sitting up front before the enhancement process starts. The W1 doesn’t. “W1 is a big build. Engine, gearbox, front cross-member and front suspension all come out in one hit,” Purcell explains.

The station responsible sits in a corner of the workshop set up specifically for the W1 program where two cars can be worked on at one time. The front sub-frames of each, cradling the engines, gearboxes, and with control arms and braking components attached, are lowered onto rolling jigs engineered specifically for this purpose and wheeled away to a sub-assembly area. 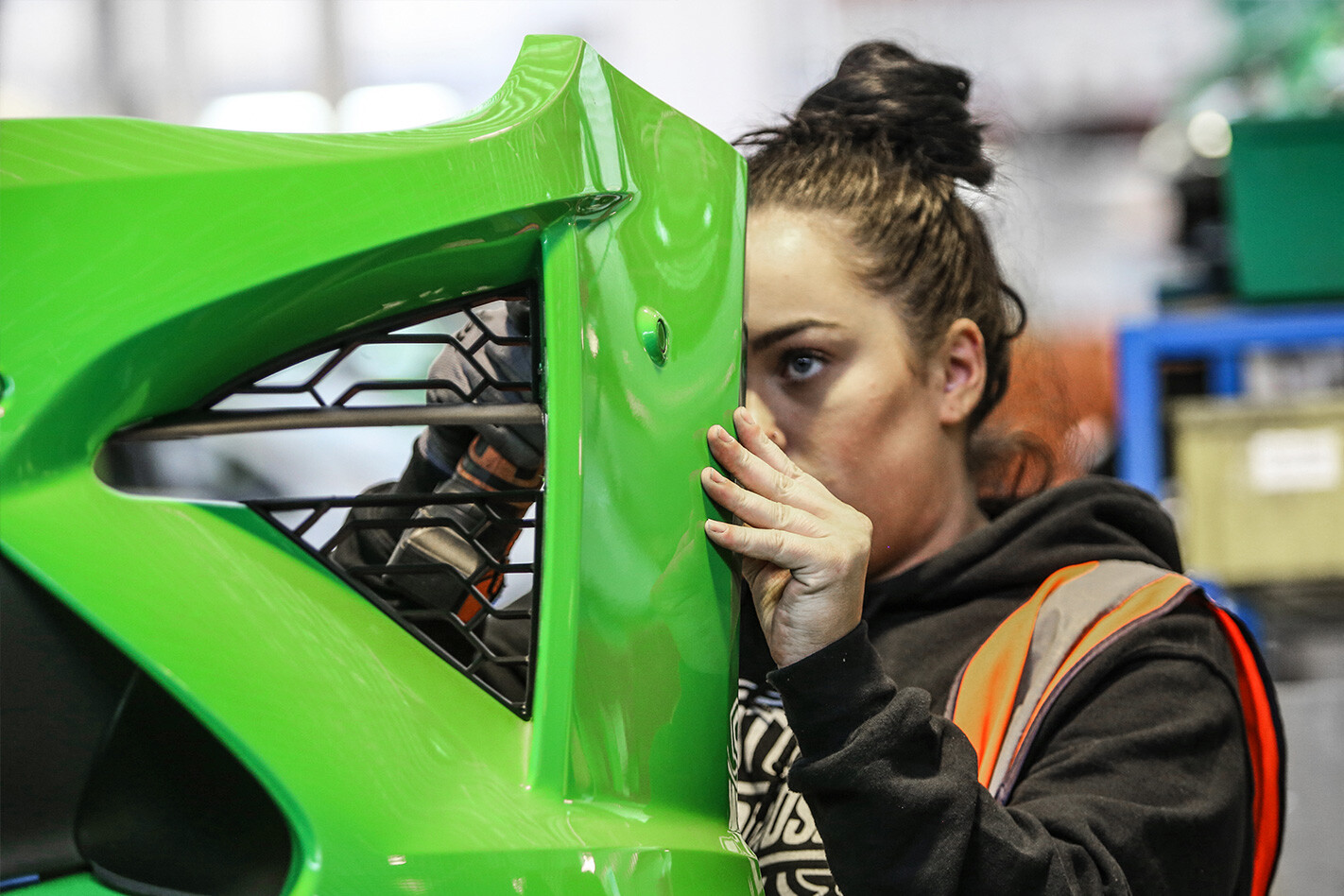 The operators here don’t rotate through different stations like others do. A young, brown-haired girl named Savanna is one of the elite few selected to work the procedure, and for her it’s a dream come true.

“I moved over from Adelaide. As a Holden fan I saw it as a great opportunity to come and work for HSV. There are only 300 W1s being built, so to be one of six people that do it, it’s a great honour,” she tells me with obvious pride.

In the bay opposite the car she’s working on, the unneeded LSA engine and gearbox (destined to return to Holden to be sold as spare parts) are craned out of the sub-frame to make way for the W1’s ultimate cornerstone – the 474kW/815Nm 6.2-litre supercharged LS9 V8. 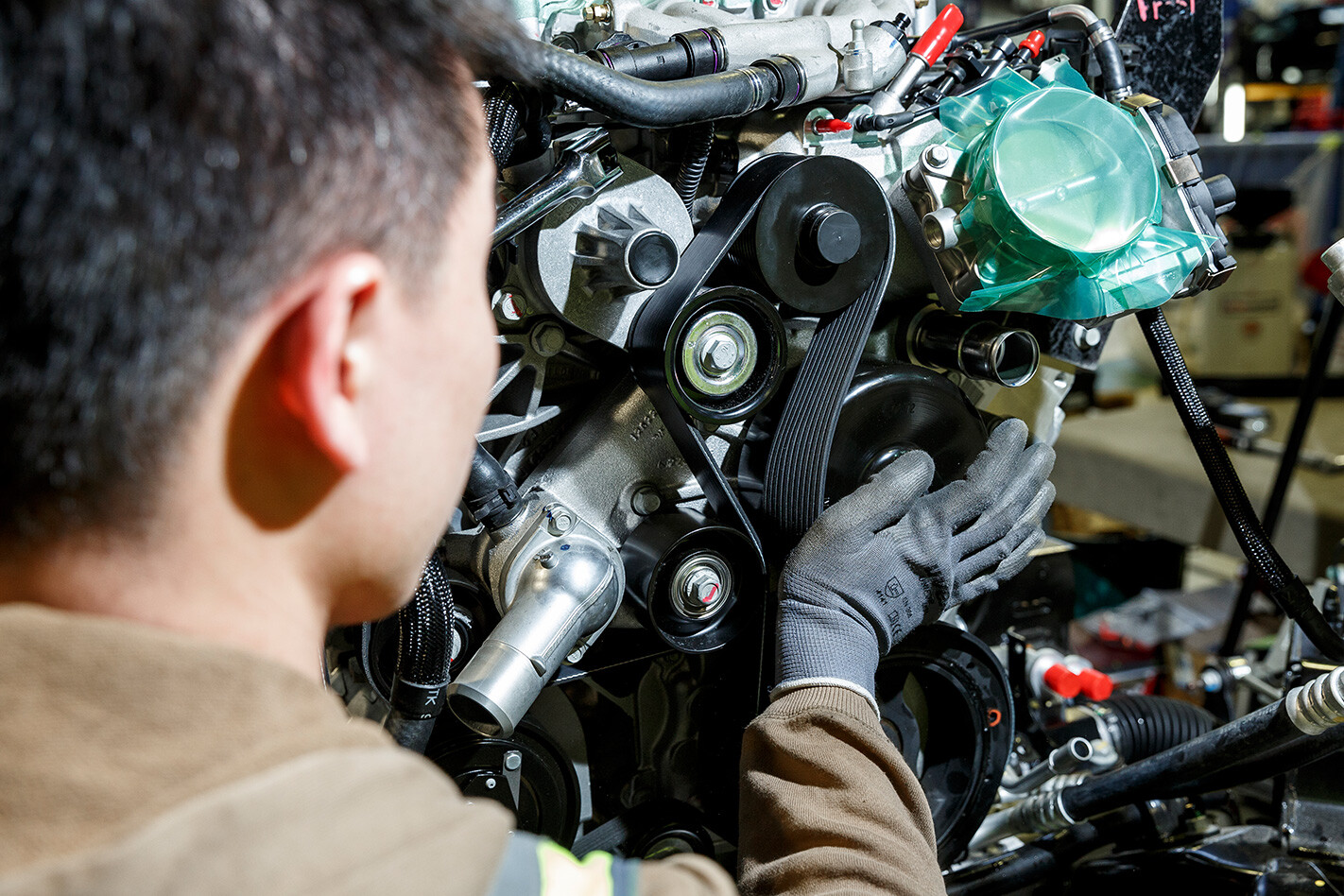 Each one arrives in a crate from GM Detroit exactly as it would be fitted to a C6 Corvette ZR1. It’s a race-honed engine with titanium valves, a lightweight rotating assembly and a bigger displacement supercharger with water-to-air intercooling.

“Each of the engines is hand assembled in the US and has the assembler’s name on a plaque, similar to the LS7 program that we did for W427,” says Purcell, recalling what was the most expensive HSV in history until W1 came along.

Most of the LS9’s factory ancillaries are unsuitable for the W1 application. Exhaust headers, engine mounts and oil cooler are removed and replaced for packaging reasons. The dry-sump oil reservoir is altered to HSV’s design for chassis-rail clearance. Heater hoses are changed, coil packs are moved and a new wiring harness added before an engine number is stamped onto the block and the final ensemble lifted back into the sub-frame. HSV engineered a bespoke input shaft to mate the W1’s six-speed Tremec manual with the LS9. It’s the only GM-sanctioned application of this engine that doesn’t use a transaxle gearbox. Once the drivetrain is back on the jig, it’s wheeled under the VFII body and raised into its final resting place with the W1’s Supashock suspension attached. None of the process is automated.

“Our ‘robots’ all have hearts,” jokes Purcell. “It’s about a six-hour turnaround from having a running LSA to a running LS9. The guys are quite good at it. Once you’ve worked in this area for a few weeks you know every nut and bolt of the job.”

Customers have the opportunity to come in and witness their car being built and it’s this part of the process the W1 buyers want to see most. Purcell is the man who makes it happen. “I had a customer bring his son, who was 12, and his father. They came and took photos of the engine going into their W1. The car was going to be the son’s inheritance sometime down the line.”

Visiting the workshop is a seminal experience. Tom’s Cafe (named after Mr Walkinshaw) is a shrine of signed memorabilia from years past. Old race-car parts are stacked on top of break-room lockers. Magnesium V8 Supercar wheels, stickered-up race-car doors and stylised illustrations drawn by HSV designers hang on the walls.

Each W1 returns to the regular production line ready to receive its wide-body front guards. They’re prepared by a bearded bloke named Cameron, who attaches the carbonfibre inserts to each side with practised finesse. “I’ve loved HSV all my life. To work on the last one is a real privilege,” he says. “I can pretty much put a whole car together here and I get a buzz out of seeing them on the road. I think, ‘Hey, I built that!’”

Cameron’s handiwork is followed by fascia fit-up, where the W1 gets its distinctive bumpers, model-specific spoiler with carbonfibre upper plane and a requisite ‘I just want one’ sticker on the rear windscreen.

“These bays are based on 25-minute turnaround times,” says Purcell. “Not so the guys are rushed, just so the cars move in sequence.” 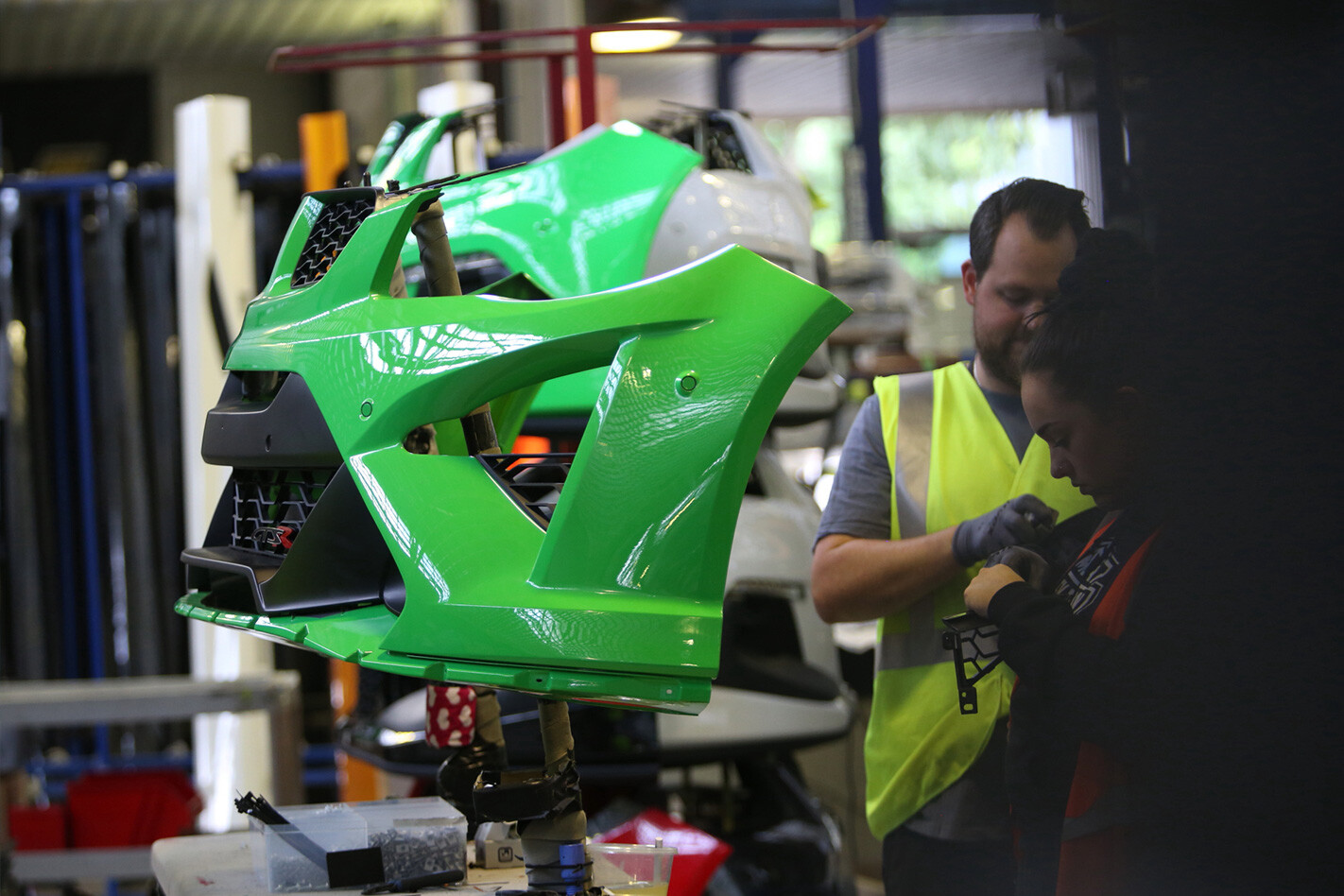 He’s right, it’s almost relaxed. Nobody is hurried to push a car through. W1 has sent a buzz through the place and the operators still love it when one arrives at their station. It’s special.

A four-post hoist raises each car for access to the side skirts at a working height where all doors can still be opened. It’s one of 22 hoists in total. Here, the engine cover, tyre placard, key fob decal, petrol cap sticker, floor mats, bonnet badge, rear badges, sill and centre console badges are all added.

Exterior decals are attached using 3D-printed jigs for alignment. Warming drawers keep the adhesive backings primed. The nameplates of deceased HSV models are plastered to the outside of tool boxes all over this area. From here, it’s on to brakes, wheels and tyres. “We strip off Holden rotors and calipers and fit up our own HSV-specific ones,” says Purcell. “Any plastics and metals that come off the car go to the recyclers.”
Enormous 410mm AP Racing brakes are installed with monoblock six-piston calipers. The monster stoppers are framed by the W1’s black, forged alloy 20-inch wheel set, one of the lightest HSV has ever fitted, wrapped in track-ready Pirelli Trofeo R rubber.

These are finishing touches from a production point of view. Assembled W1s roll off the last hoist and down a bump track to reach the wheel-alignment bays, where they’re set up to a HSV spec that’s different to any Commodore.

“Nobody will be happy to chew out these tyres in 200km,” says station operator Dale. He’s a dab hand who has been at HSV for seven months and is already training others to use the apparatus. The accuracy needed is time consuming given the W1’s focused suspension and extreme tyre performance. Dale sends the prepped W1 towards the programming bays. There, it’s flashed by a PC that sets all of the car’s electrical functions and changes the calibration of any W1-specific modules.

“We then get down to the final hoists,” says Purcell. “A full visual inspection and checks of safety-critical things, then a road test outside the complex to make sure the steering wheel is straight, brake pedal is good and there are no negative attributes.”

End of line validation includes up to 200 quality checks. A second set of eyes at the penultimate station inspects the inspectors and even assesses the bits HSV hasn’t touched. “Say a wiper arm was loose, as an example. We would sort it here, but back when the Holden plant existed we would write up paperwork that’d go back to them, their quality people would review it and hopefully we wouldn’t see another car sent to us with that type of fault. It was a way of us meshing in with Holden quality to raise the standard across the board,” explains Purcell.

Quality is an ongoing theme here. A huge sign on the wall near the entrance reads, ‘Quality is our legacy.’ I feel a pang of pride at the end of the line, as the W1 I’ve followed through the last steps receives its build plate and VIN decal: its badges of honour.

This is the end of an era for HSV, but what a way to go out. Seeing Australia’s superlative vehicle pieced together by hand is an eye-opening way to appreciate the level of engineering inside each W1. There will never be anything else like it. I mention this to HSV’s spokesman on my way out.

He knows where I’m coming from. “We have an internal mantra here, and that’s ‘pushing boundaries’,” he says, with just a trace of melancholy. “It’s been bloody good fun.”