Hyundai isn’t known for its hot hatches. Well, possibly until now, if the i30 N is a taste of what’s to come

POISED to belatedly join the hot-hatch set with the forthcoming Hyundai i30 N, if these prototypes are anything to go by, it’ll be good!

WHAT IS IT
A heavily re-engineered version of the new PD-generation Hyundai i30, featuring an all-new front suspension and steering set-up, a broader front track, a larger 2.0-litre turbo-petrol four, and significantly enhanced seating and driver appeal. 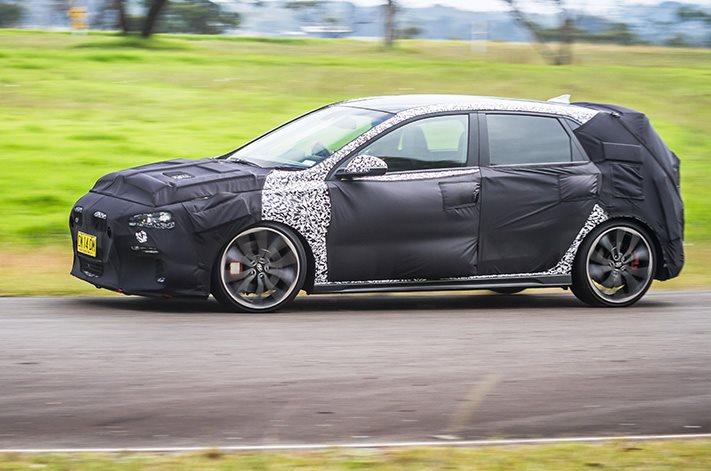 WHY WE’RE TESTING IT?
Because Hyundai Australia has two right-hand-drive i30 Ns (in full camouflage) here for final calibration work, and decided to let the media loose in both 184kW and 202kW versions on a private test track, away from prying eyes.

THE WHEELS VERDICT
A positive first taste of the forthcoming i30 N, demonstrating that it has the sporting DNA to create a polished, poised and powerful hot-hatch alternative to the Golf GTI. All it really needs is a bit more mongrel in the induction growl plumbed in via its sound symposer, and a more pivot from its chassis if it really wants to deliver Focus ST and Renaultsport Megane levels of handling adjustability and involvement. 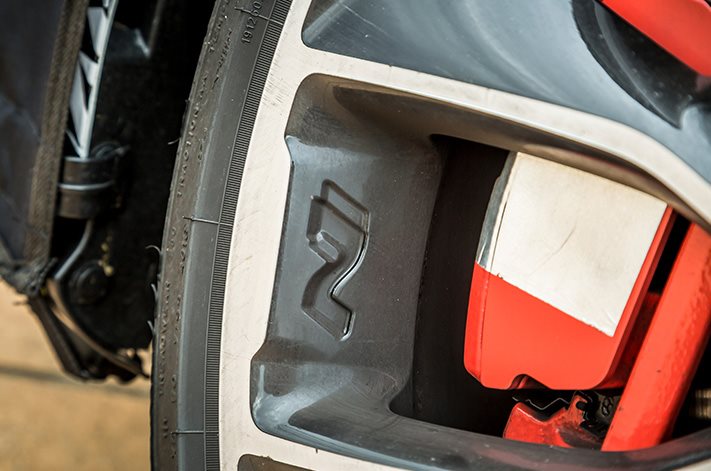 THE WHEELS REVIEW
If you started at ‘A’ and consecutively worked your way down the alphabet listing the manufacturers who’ve graced the global hot-hatch stage, Hyundai would appropriately fall somewhere around ‘N’, decades behind even Proton. The odd dabble in turbocharging and a likeable (but long-dead) coupe have barely registered in bolstering the 50-year-old South Korean firm’s brand image, so Hyundai has belatedly decided that a proper performance line is in order, starting with the camouflaged hot hatch you see here, the i30 N.

Hyundai’s performance ambition is no secret, seeing its WRC cars have been wearing light-blue ‘N’ logos for several years now, but this is our first taste of what ‘N’ will mean to its road-going fleet. This is just a spoonful, though, because we’re driving a pair of not-quite-ready i30 N prototypes on a private test track. Many engineering details are yet to be signed off, including suspension tune, engine outputs, and drive-mode calibration, yet even in an unfinished state, Hyundai’s hot-hatch shows real promise. The production versions won’t launch until late this year, closely followed by the i30’s new-generation coupe twin, the Veloster N. 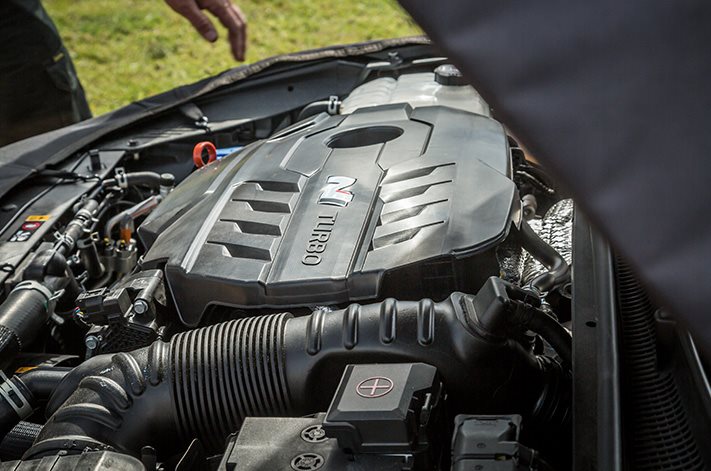 Two versions of the i30 N will be offered – an entry-level car with around 184kW and an up-spec version with 202kW, or thereabouts. Torque on both Ns is expected to hover around 375Nm, but the Performance Pack version will make that available across a broader rev range. The 202kW car will also get a lower final drive ratio for slightly snappier gearing from the only transmission on offer at launch – a six-speed manual, just like its Renault, Ford and Peugeot competition … but not Volkswagen. Hyundai says an eight-speed dual-clutch transmission is two years away.

In a similar vein to the multiple grades of Renaultsport Megane, and Golf GTI and R models, Hyundai plans to lure buyers in with a sharply priced i30 N starter. While its headline power output may not be quite as heroic as the Performance Pack model’s (achieved via a slightly different overboost strategy), the base i30 N shares almost everything with its bigger brother. And that means not a whole lot with a bread-and-butter i30.

Beneath the inevitable car bras and camo colouring, the N versions disguise a completely new front suspension set-up, with flared front guards to house a broader track. Up front, nothing is shared with the regular i30, or even the warm SR. A new front crossmember, front knuckles, lower control arms, and a new dual-pinion steering rack with rack-mounted electric assistance (instead of column-mounted) combine with completely different kinematics (lower roll centre, different king-pin offset) to achieve faster steering response and a higher level of traction, while still providing good feedback.

Yet there are some differences between N models. The base car relies on torque vectoring and wheel braking to enhance its traction, whereas the Performance Pack version scores an electronically controlled LSD, as well as larger front brake rotors and 19-inch alloys wearing HN-stamped Pirelli P Zero 235/35R19 tyres (instead of Michelin Pilot Super Sport 225/40R18s). 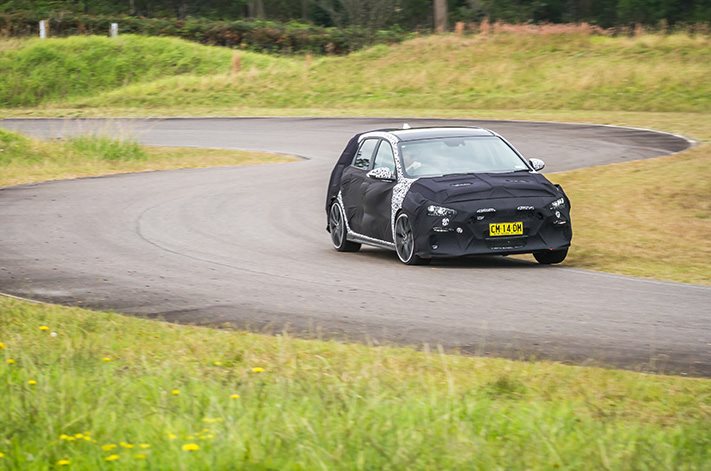 At the rear, the i30 N’s multi-link arrangement is similar in concept to what’s offered on the SR, though the roll centre is lowered, a few areas of the body structure are beefed up and there are two reinforcement struts underneath the floor. But Hyundai’s vehicle test and high-performance development head and former head of BMW’s M Division, Albert Biermann, is adamant the new-gen i30 offers “a fantastic platform to start with – very mature, very solid, good substance car”.

One final feather in the i30 N’s dynamic cap is its damping system – fully adaptive with five modes: Eco, Normal, Sport, N, and Custom. They are adjusted via two light-blue-coloured flaps mounted beneath each horizontal spoke on the N’s nifty steering wheel. The left scrolls between Eco, Normal and Sport – the damping and steering calibrations of which are yet to be determined by Hyundai’s Aussie engineers for our market – whereas the right activates ‘N’ mode (which ramps everything to its max setting, mainly for racetracks) or Custom, which allows individual configuration of suspension, steering, throttle response, ESC control, LSD control, exhaust sound and rev-matching. A unique feature in the hot-hatch class, this synchronised rev-matching function ramps up its flamboyance as you scale through the drive modes, or you can turn it off via a button on the wheel. 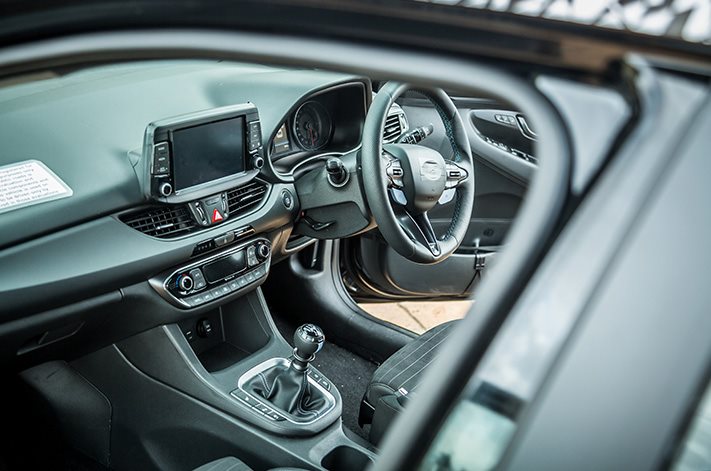 Finally, some driving. The private test track is very smooth yet also hilly, meaning it’s quite demanding on brakes and tyres, so I stick to N mode in the Performance Pack model and give it a bootful. There’s enough grunt to break traction in first gear from a standing start but once the 202kW N is moving, its front end proves surprisingly grippy, capable of channelling the N’s considerable torque. Trailing some brake into the test track’s tighter corners, the N adjusts its attitude keenly towards the apex before proving deceptively rapid up some quite serious inclines, even leaving its slick six-speed shifter in third.

Unexpectedly, there’s a smooth and sweet cohesion to the 202kW N’s demeanour that is almost at odds with its power figure. Its engine – a development of the all-aluminium 2.0-litre ‘Theta II’ turbo donk from the Sonata – cops a new turbo, a barky new exhaust system, new sensors, and a revised induction system to give it much more high-performance character.

“We worked a lot on the intake system to have a more free airflow in and out; that’s the magic of a good turbo engine”, says Biermann. “We tried to keep it up revving way above 6000rpm … some of the turbo engines die too early and run out of talent, and we tried to avoid that as much as we could because for good driving, you need linearity also from the engine.”

The reality proves it’s a vastly different beast to the Sonata’s smooth but rather characterless unit. In the top i30 N, an active exhaust flap (unique to this model) combines with a sound generator that plumbs induction noise to the firewall to give the i30 a fruity and crackly, yet sweetly refined personality. You can hear the turbo spooling up quickly from 1700rpm, yet this engine will happily stretch to the 6800rpm cut-out if you so desire. That said, 3000-6000rpm is its pleasure zone, supported by a subtle growl from the engine bay under load – perhaps a bit too subtle for a hot hatch with this level of performance – and a deliciously barky dual exhaust on overrun or between gearchanges. 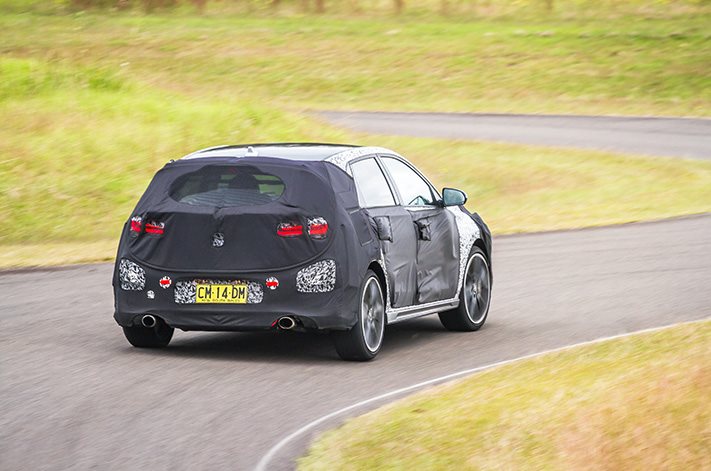 Three hard laps in the 202kW model enhance the car’s feeling of cohesiveness. Its steering (with just 2.2 turns lock-to-lock) feels well-weighted and brisk, without being too pointy, its chassis is planted (courtesy of extensive suspension tuning at the Nurburgring), its brakes are impressively robust and its gearshift feels well-oiled. Terrific driving position too, courtesy of new sports seats developed in-house by Hyundai’s WRC team and mounted nice and low, unlike the bar stools in the Elantra SR. I just wish there was a bit more point from the rear end, a touch more growl from the engine, and more seamless rev-matching if you’re lazy and simply shift down from fourth to third, without touching the brakes.

The 184kW car comes off surprisingly well in the face of its beefier, more feature-laden sibling. Not quite the same level of exhaust bark takes little away from its drivetrain sportiness, while the lack of a dedicated LSD only makes itself felt in really hard driving. At six or seven tenths, even in the rain, the 184kW i30 N has no difficulty feeling quick and effortless. In order to enhance the i30 N’s entry point, I think the starter model makes complete sense – if you don’t mind shifting gears yourself.

What such a closed environment doesn’t tell you is what the i30 N’s road refinement is like, or any dynamic aspect of its Normal and Sport modes considering both are yet to be tuned for Australia. But the bones are definitely there. The i30 N package feels holistic in its cohesiveness, and that’s with more tuning still to come.

Hopefully on the road, the way Biermann describes the i30 N is what we’ll get: “Our whole story in ‘N’ is about the driving fun, especially focusing on the cornering, so this is what we live for, what we work for. I keep saying ‘we love the corners at N’, and N, it’s the logo of a chicane on the track, and that’s where we put our most effort – making the car go around the corner in a very good way. Of course, it has power, it has the brakes, and it’s quite consistent on the track. The whole layout of the car, the choice of tyres, the cooling system, the brake system, even in the base spec.”

A track-honed car that’s also comfortable and involving on the road is what hot-hatch dreams are made of. Hyundai has never produced a true performance car, let alone a sporting model able to challenge class benchmarks, but a lot of energy has been invested in the i30 N program. And given our brief taste of this surprisingly sophisticated hot hatch, there’s every chance the finished product may finally show the Golf GTI what a true all-rounder can be. If you want a manual, that is.