Style over substance doesn’t wash in this company

IN THE final reckoning, the Mini John Cooper Works registered the slowest lap time and one of the highest as-tested prices of our entire group. That combo alone ought to be enough to condemn it, but despite finishing flat last, and by some margin, the Mini is still a car that cracks smiles among all who drive it. 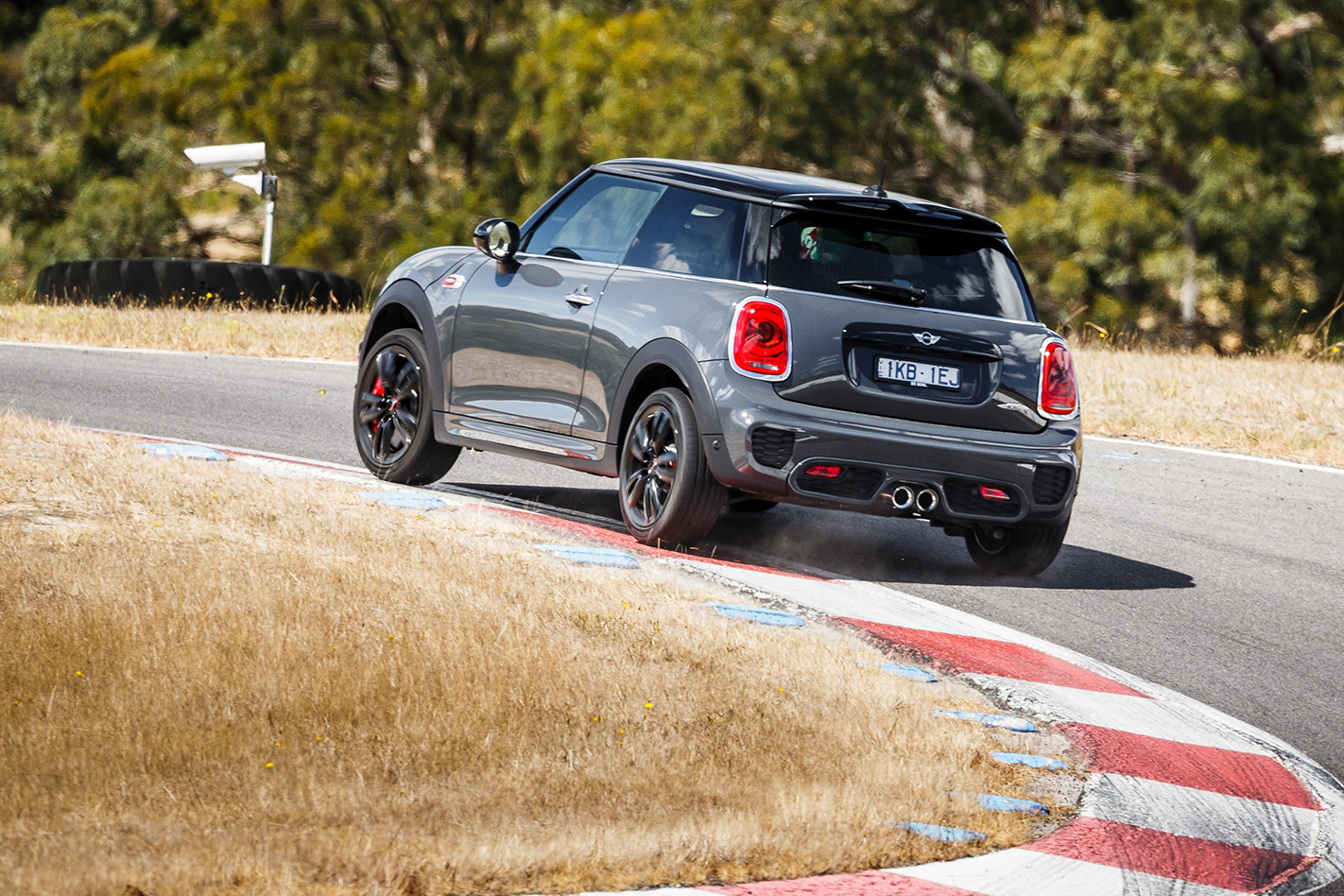 Were you looking for a stylish hot hatch that offers zip away from the lights and feels kart-like and cheeky at moderate speeds, even at $51,850 (or $49K for a manual), a case can be made for the JCW.

The thing is, if you’re spending that sort of money, you’ve probably done a little more research. You’re looking for something with a broader spread of talents, maybe something that gets more impressive the harder you push it. If so, the Mini rapidly finds itself running out of answers.

This car’s biggest problem is its meagre tyre footprint. At 100km/h the Mini is putting 21 percent less rubber in contact with the ground than the Civic Type R. The 205/45R17 Hankook Ventus S1 Evo run-flats are an odd choice of boots for a flagship sports model (see sidebar). 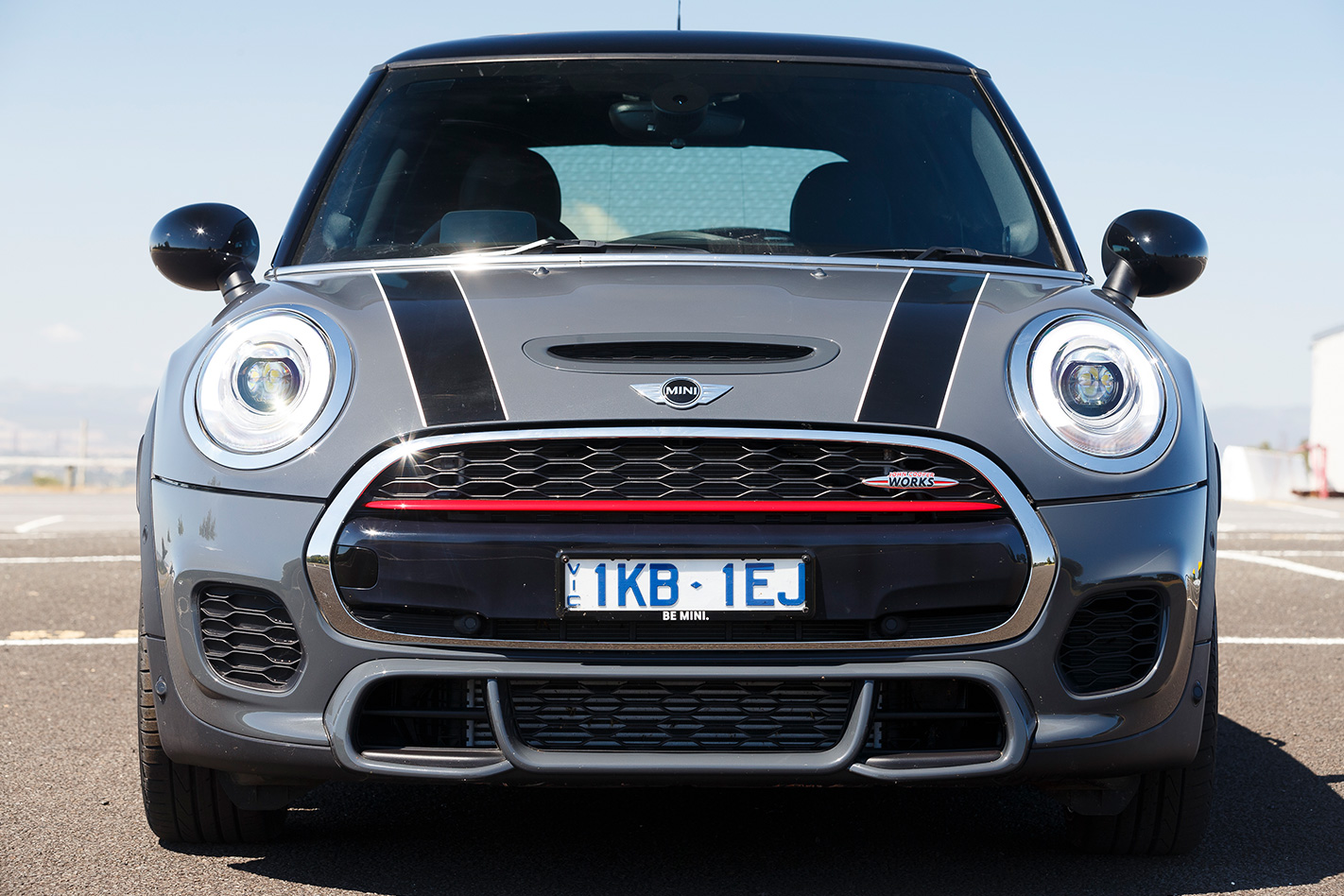 They never inspire a great deal of confidence on a twisty road, moving around a fair degree under braking, prompting sharp stabs of corrective steering from the driver.

It isn’t even the sort of prescriptive tail-happiness as displayed by the Clio Trophy 220 either. In that car you consciously bring the rear end into play. In the Mini, you often find yourself reacting to the car’s oversteer, even with all traction aids on, sometimes at very inappropriate speeds. And without the benefit of a limited-slip diff, it’s easy to overwhelm the fronts and lapse into understeer.

Many of the Mini’s issues could be solved with bigger and better rubber. The drivetrain is very good indeed, although 170kW starts to look a bit pedestrian at this price level. That’s more than 10 grand over the 202kW Hyundai i30 N. In other words, you really have to buy into the whole Mini shtick. 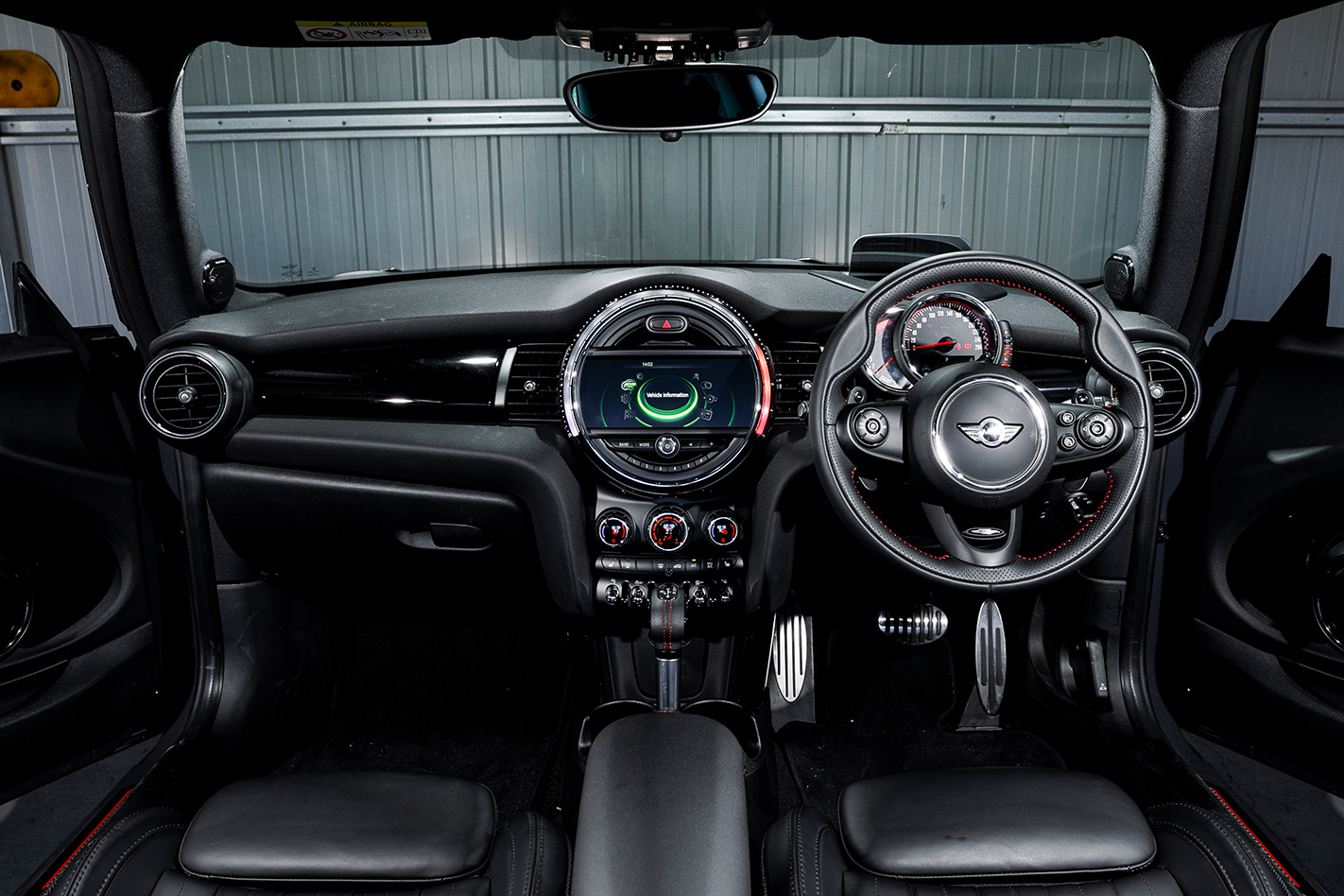 Some find the cabin comically overdone, while others see it as heavy-handed. The chequered flags running across the top of the dinner-plate clocks, a head-up screen that sounds like a snapping biro when retiring into the dash, and carbonfibre affectations in a car weighing more than a Peugeot 308 GTi from the next class up all make you question whether this generation JCW owes more to the marketing department than engineering.

The Mini’s 2495mm wheelbase is fully 120mm shorter than the control-sized car in this gathering, the Golf 7.5, and you feel it both on the road, where the Mini’s on-limit skittishness degrades its cross-country ability, and in the packaging of the vehicle, making it one of the least comfortable for rear seat passengers, with pinched headroom, persistent tyre thrum and the sole recompense of some natty Union Jack suede head rests. 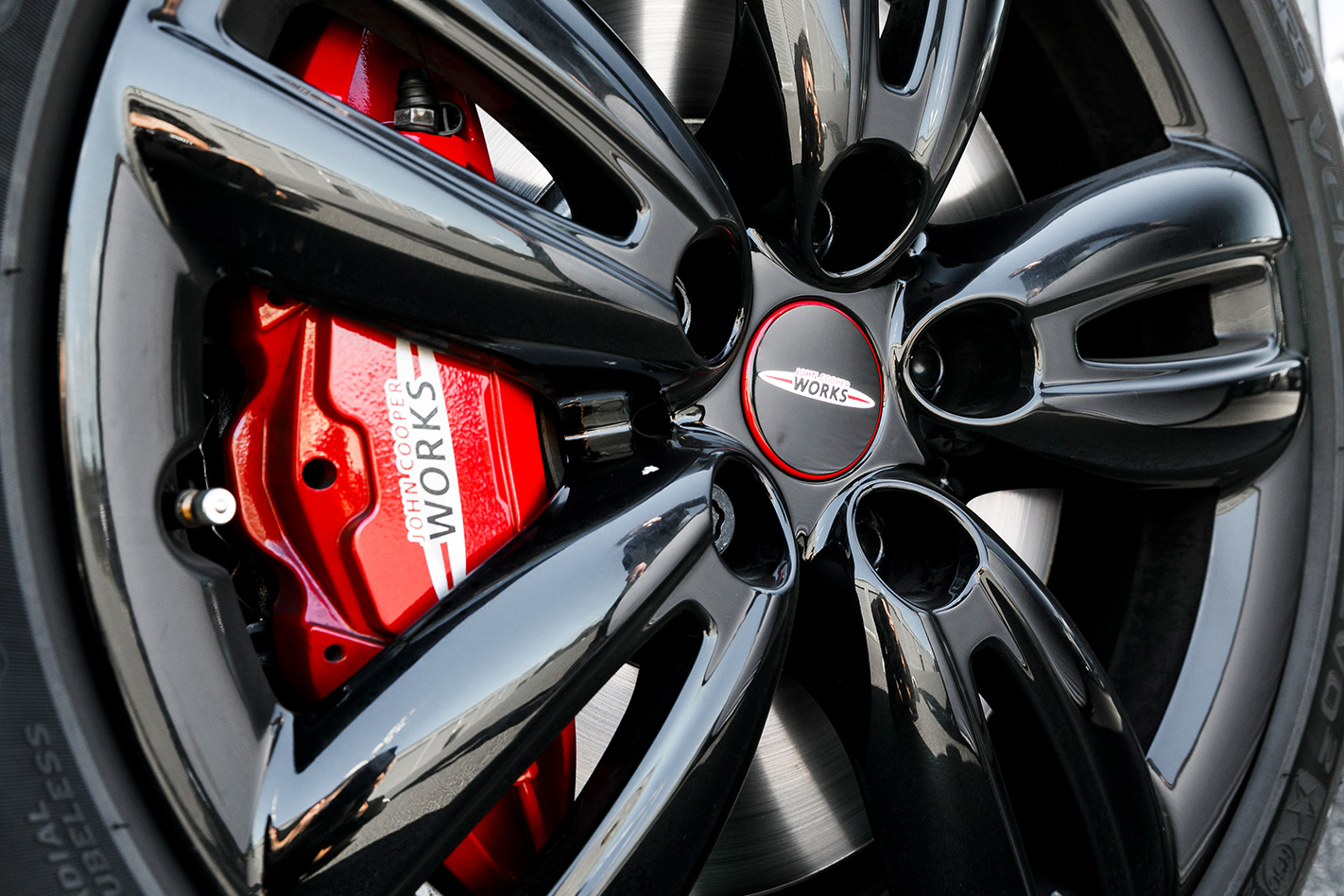 Again, much of this would be forgivable were the JCW priced around the upper range of its B-segment hot hatch brethren, possibly even $45K, but the fact is it’s not.

If you just want the range-topping three-door Mini and couldn’t give two hoots about the finer points of ride, handling and finesse, then the JCW won’t disappoint. But if you’ve read this far you’re a bit more curious than that, and we have 11 more deserving destinations for your money. 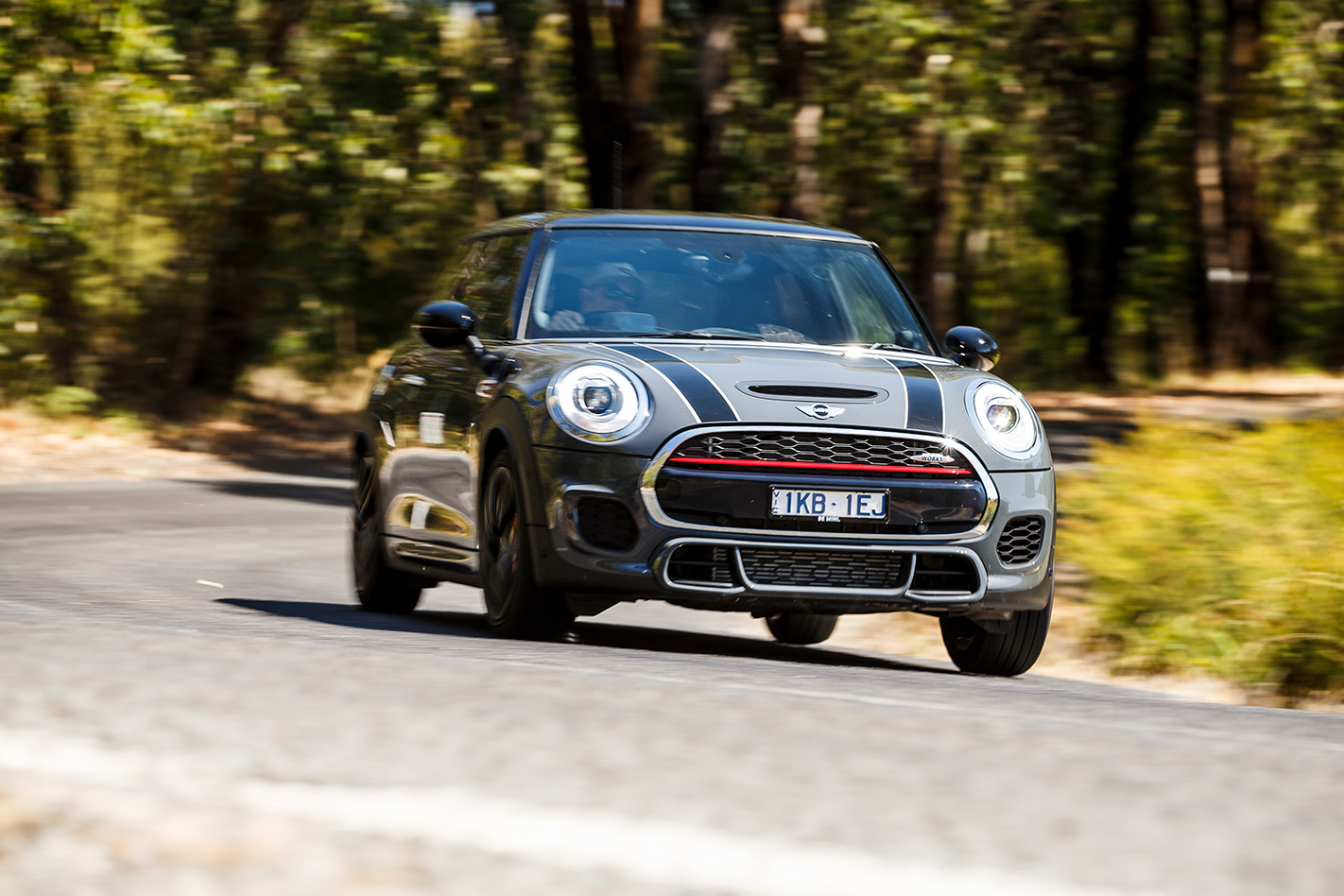 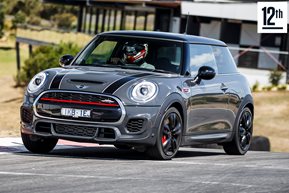 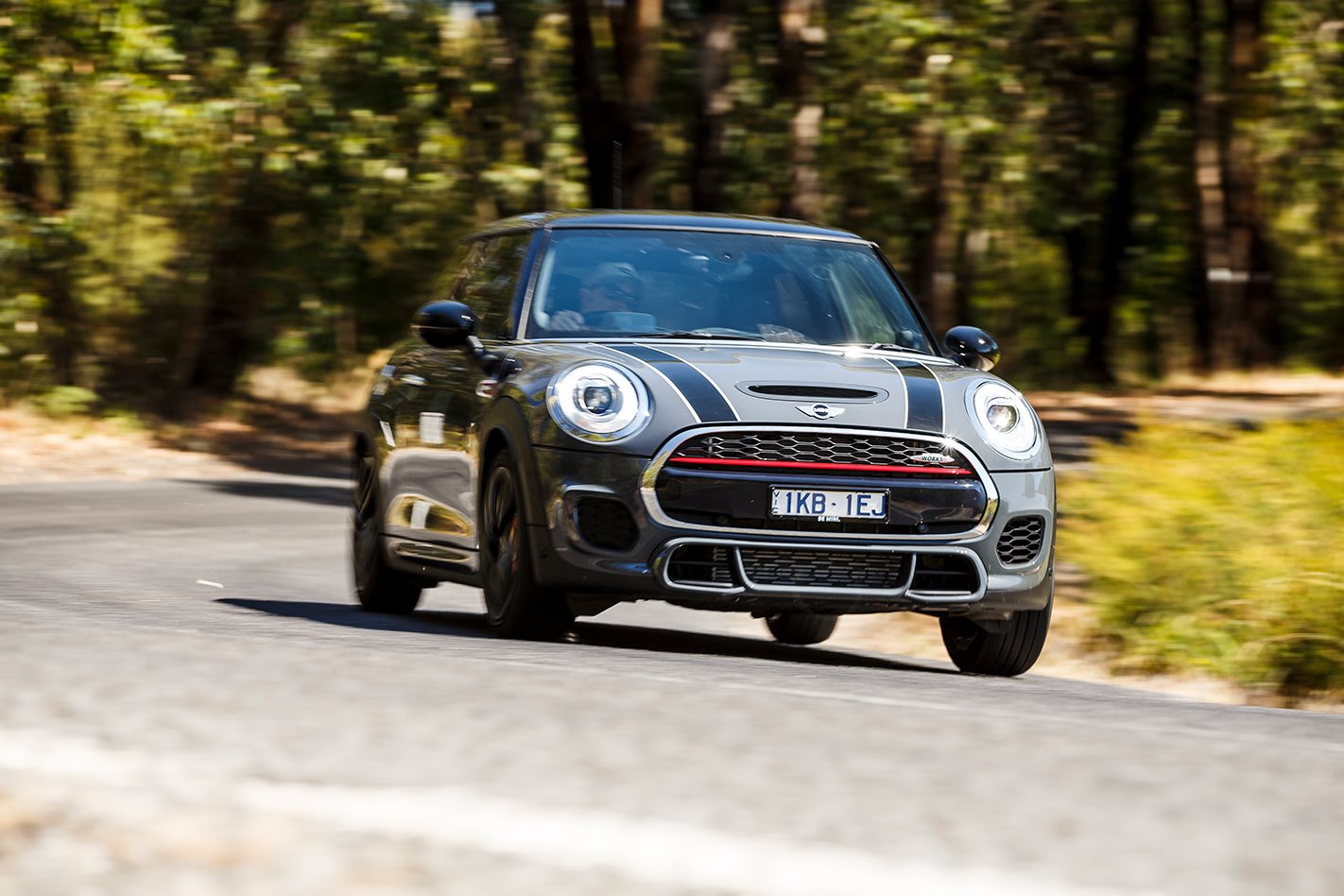 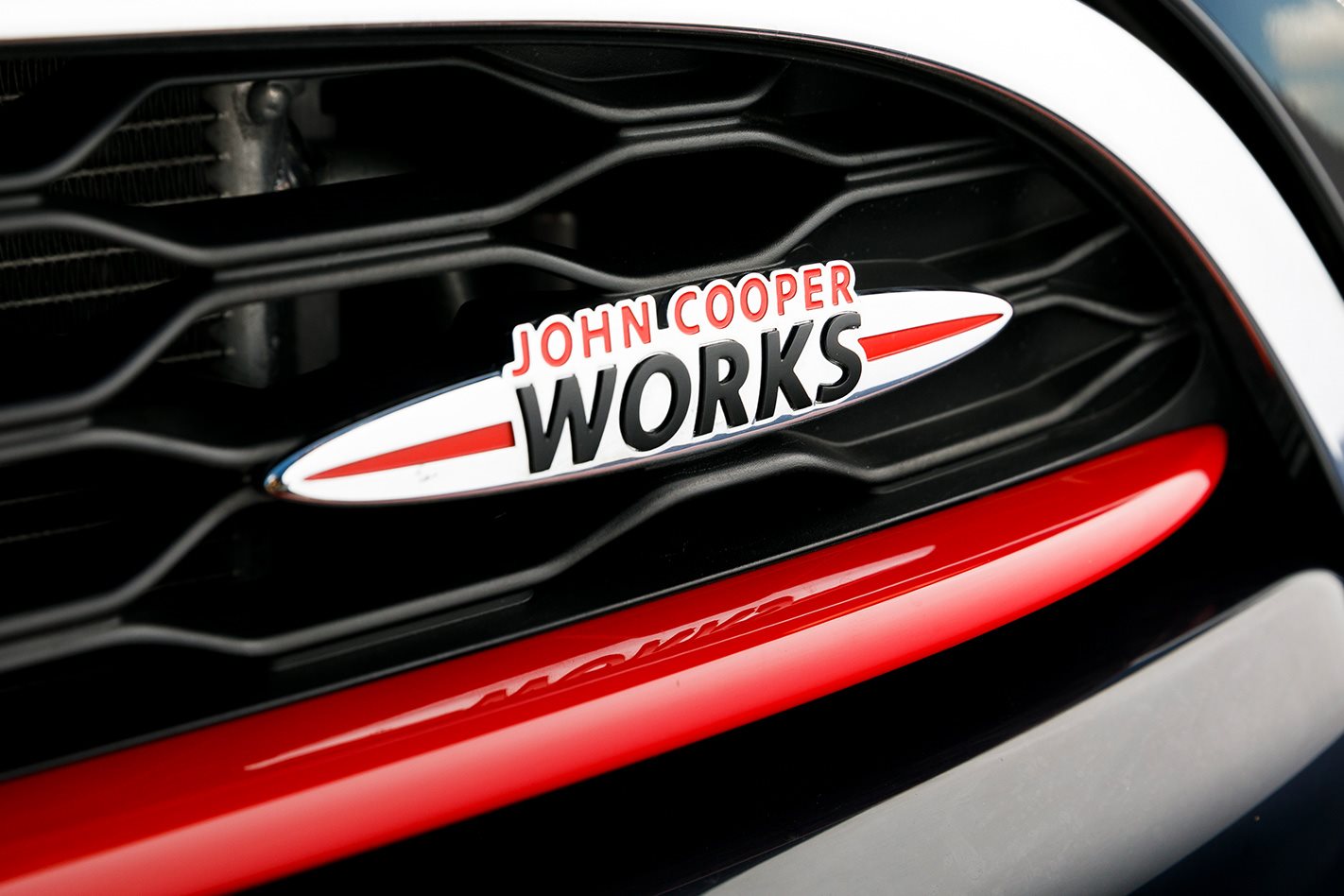 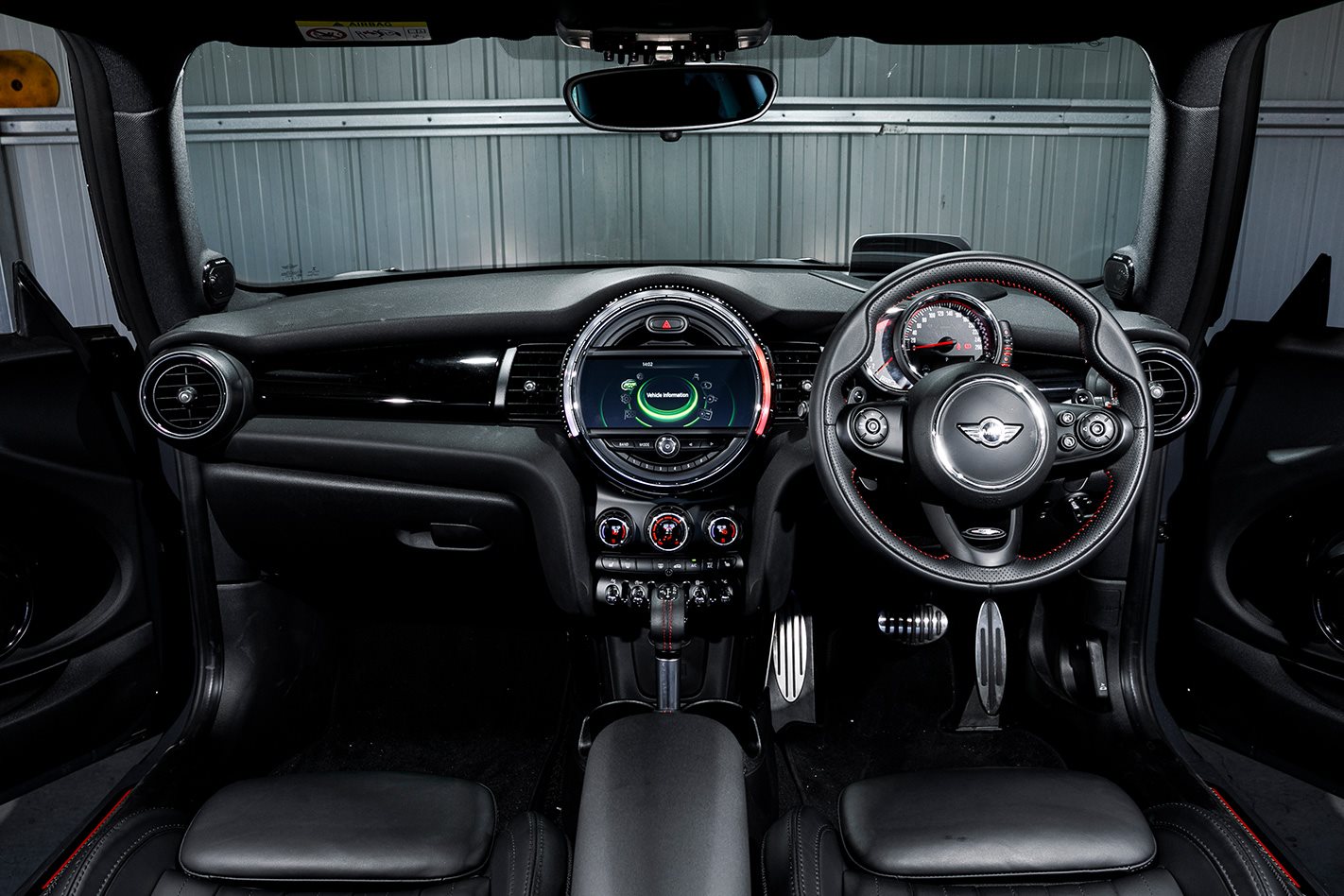 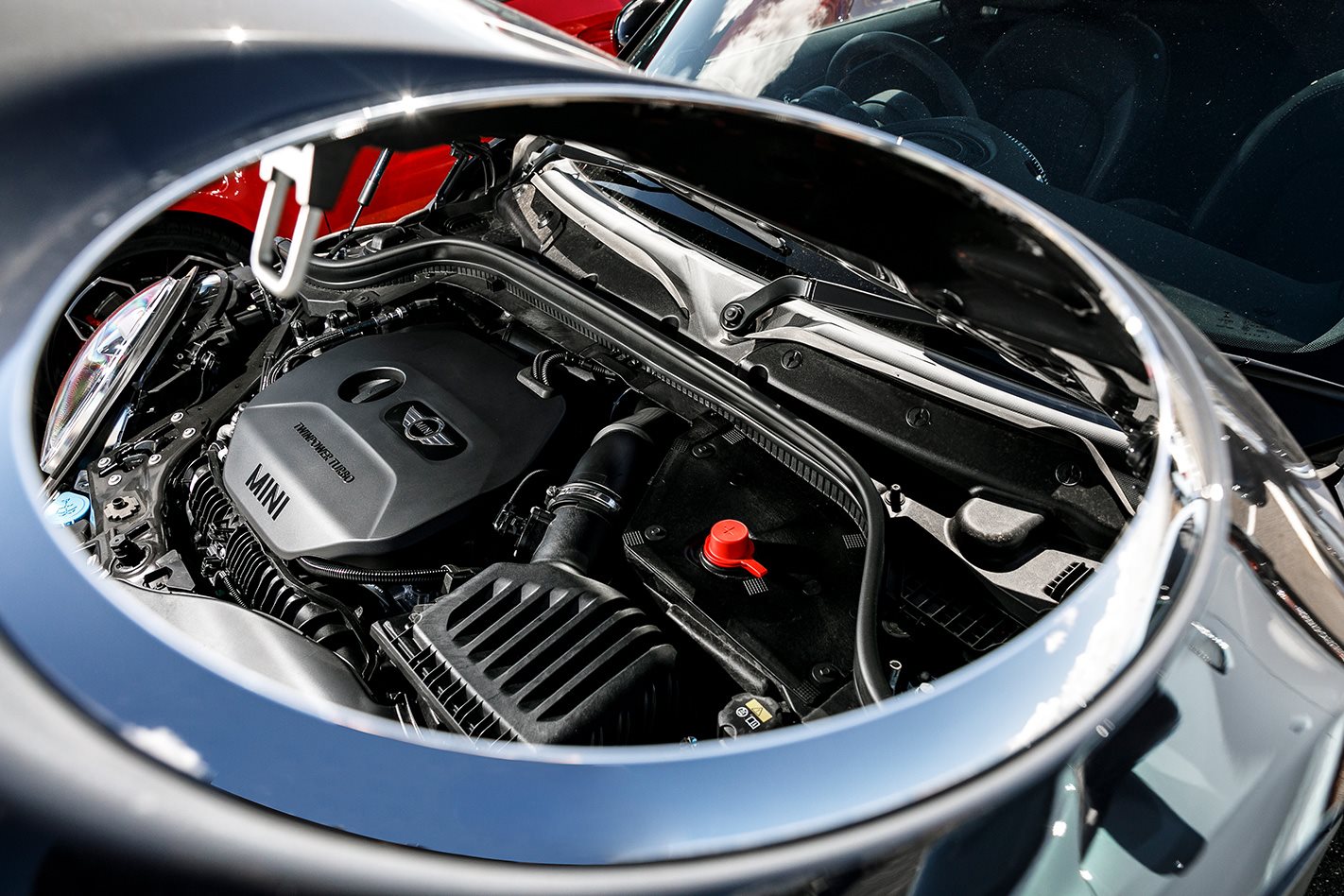 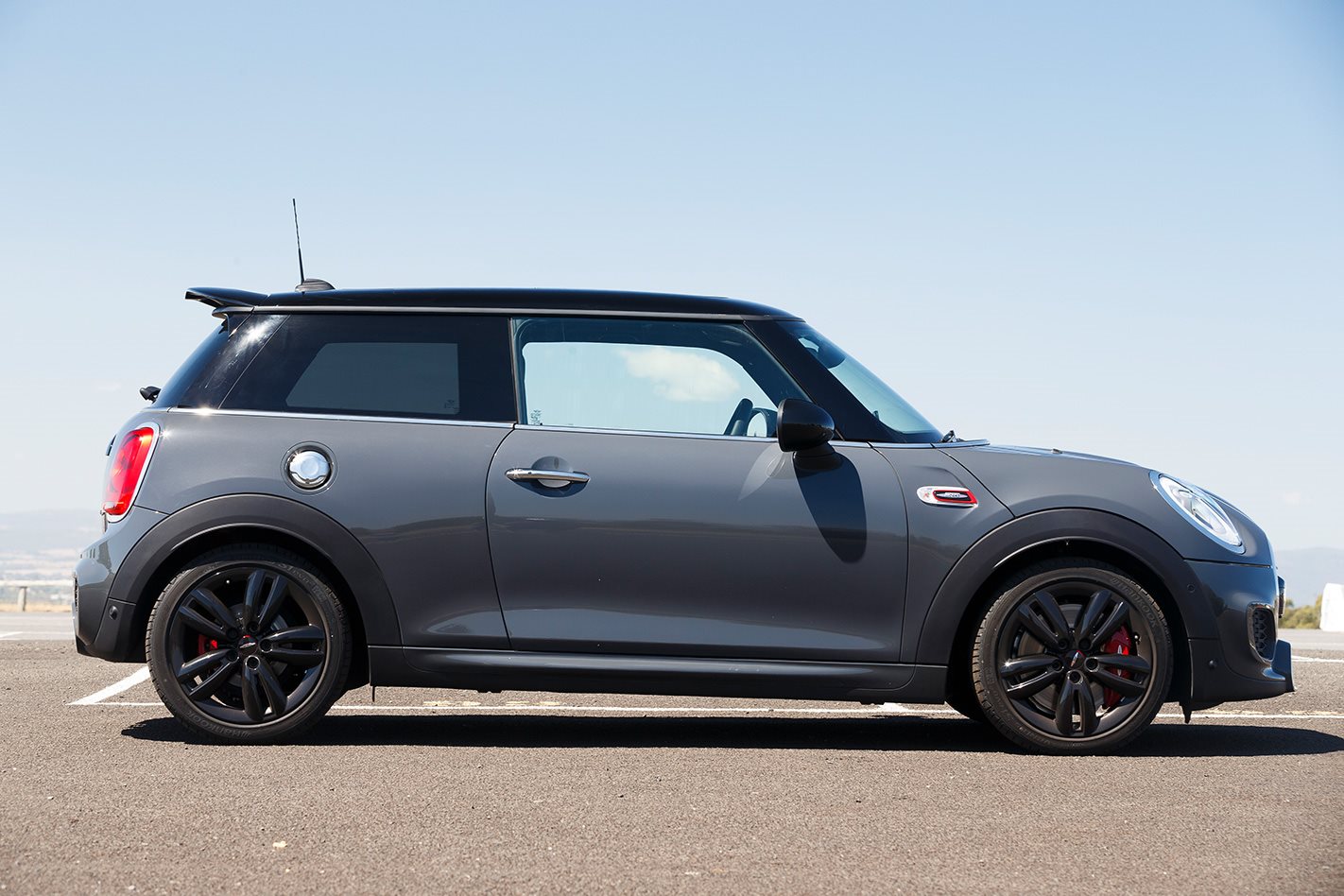 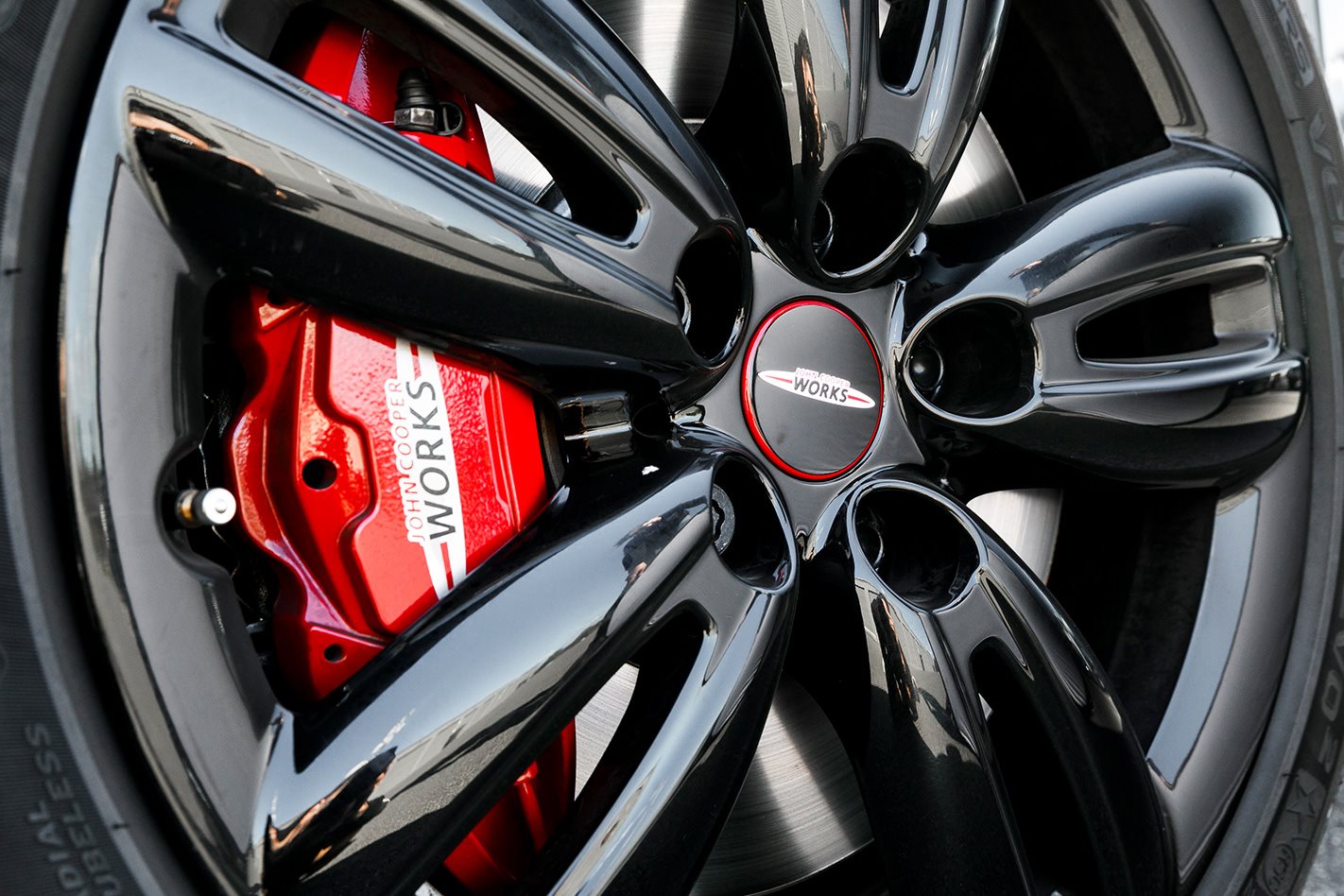 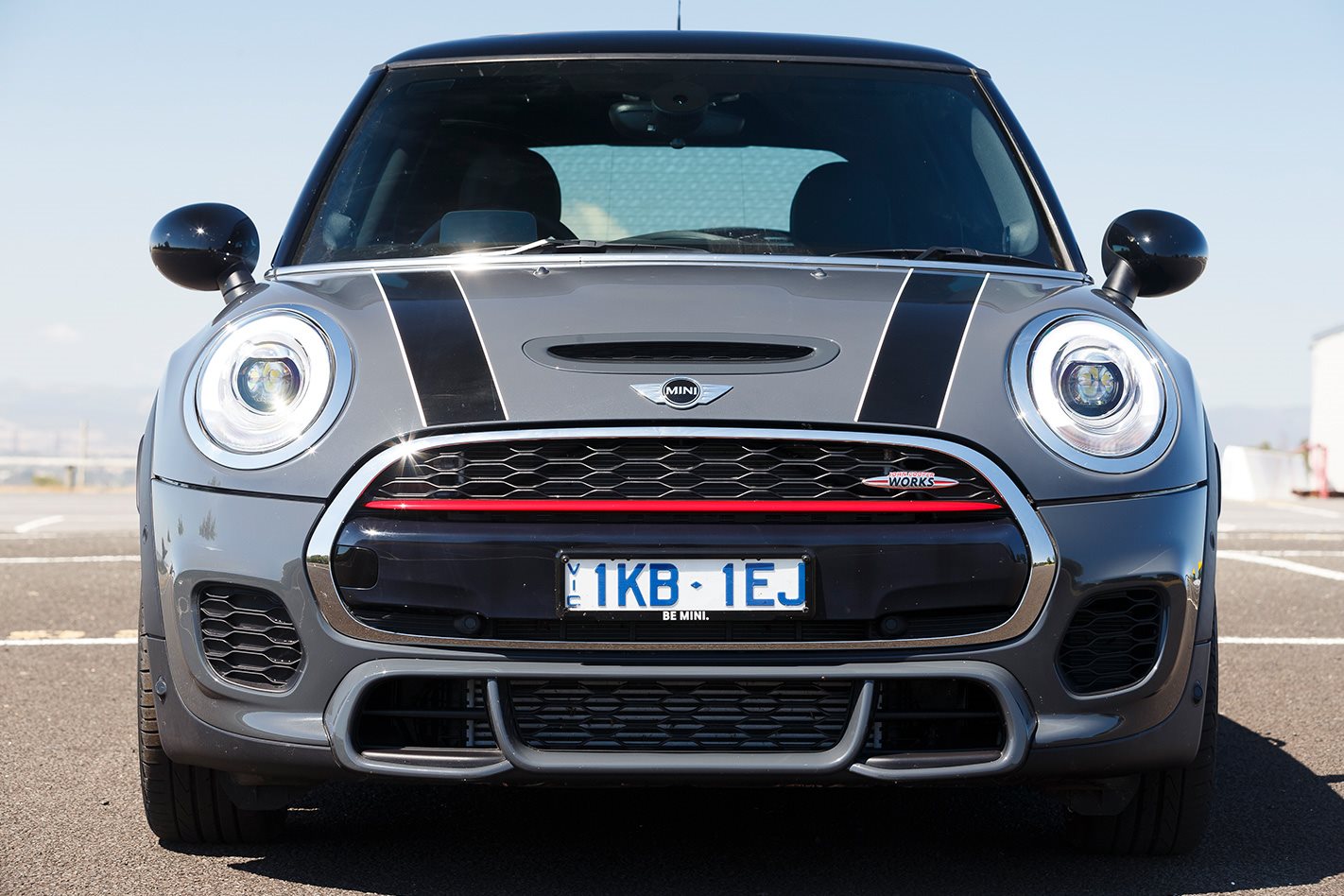 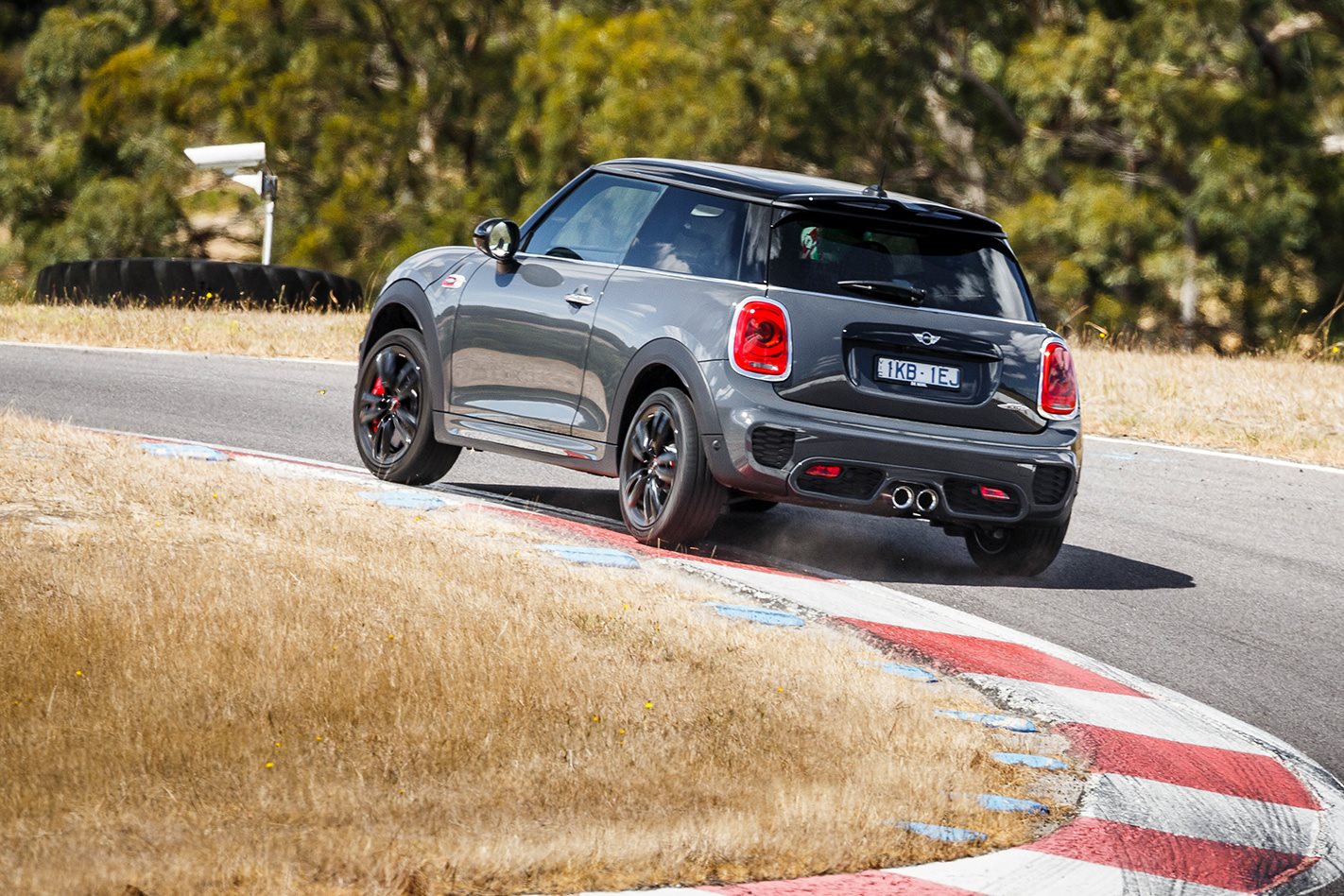