VOLKSWAGEN'S Amarok is one of, if not the best, driving one-tonne utes available.

This was first published in 4X4 Australia’s July 2013 issue.

There, I said it. But it’s not just me saying it. The ’Rok has been 4X4 Australia’s Ute of the Year for the past two years and widely commended for its on- and off-road performance, dynamics and drivability. These facts were just some of the drawcards for Queenslander Ashley Gibbons when he made the decision to purchase a new Amarok.

“I wanted a dual-cab ute,” he told us. “So I drove all of them and the Amarok ticked the boxes. It’s proved to be the nicest to live with, and it’s also good to be different.” Being different is tough for a ute buyer as Japanese models dominate the market. Not one to be led by the masses, Ashley bought one of the earliest 2011 Amarok Trendlines to arrive in the country with the aim of building a competent and comfortable touring vehicle. Choosing to be different posed some difficulties, as aftermarket gear for the VW was relatively scarce at that time.

“I went looking for an owner’s forum to see what other people were using,” said Ashley, “But being so new there weren’t any forums yet. So that’s why I started one.”

That forum is AusAmarok.com.au and it now has more than 2500 members, with Ashley continuing to run it. It’s a great source for information on buying, owning and modifying VW’s ute.

The lack of available parts made getting started a problem and Ashley was forced to think outside the box and away from the usual 4X4 accessory suppliers. If the licence plates don’t already give it away, Ashley is a proud South African, and in South Africa (RSA) they love a ute, or “bakkie” as they are called over there. As such, there is a thriving aftermarket industry for bakkie parts. Volkswagen’s ute had been on sale in RSA for some time before it reached Australia and was proving popular in that market.

South Africa is a large country, with thousands of kilometres of harsh gravel roads and off-road terrain that is very similar to here in Australia. This, plus the fact 4X4 equipment made in RSA tends to be built to cope with these tough conditions, made sourcing aftermarket gear from RSA a no-brainer.

To achieve his goal, Ashley was looking for protection equipment, upgraded suspension, load-carrying gear, navigation gadgets and off-road-capable wheels and tyres. All the usual kit you want for your outback tourer.

Starting from the ground up, the Amarok now wears Cooper S/T Maxx tyres in the 275/70R18 size. These are dual-action tyres: aggressive enough for off-road use but relatively quiet and tame for everyday road driving. Ash fitted them to matte-black 18 x 9-inch Delta 4x4 Klassik alloy wheels, giving the black Amarok a stealthy appearance. Body-coloured flares from Bushwacker cover the big tyres. The Amarok’s suspension tune is excellent right off the showroom floor, but more ground clearance and room for the upsized tyres was needed. A 40mm lift was achieved with a Dakar kit from German brand Auto Seikel. This kit includes heavy-duty replacement struts, made from cast iron and fitted with Eibach coil springs, and remote reservoir Bilstein gas dampeners.

The rear end cops four remote reservoir Bilsteins, mounted fore and aft of the axle, with the bracketry needed to fit them. The springs and shocks alone give a 25mm lift – add in the kit’s 20mm body lift and you have plenty of clearance; it settles at around 40mm.

The Seikel suspension kit was developed for the Dakar Rally Amarok support and media vehicles (hence the name). The company also supplied the underbody protection for Ashley’s Amarok, with another Dakar kit comprising 6mm aluminium plates under the engine and gearbox and 8mm protective bracing on the rear axle. The rock sliders/side steps are from Bud’s Customs and protect the sills from potential damage.

Front-end protection comes from a MCC Rocker steel bulbar that is airbag- and winch-compatible. The winch is a Runva 11XP 11,000-pound electric unit, fitted with Dyneema synthetic rope. The rear bar is another MCC item, with a swing-out spare-wheel carrier and jerry-can holder. 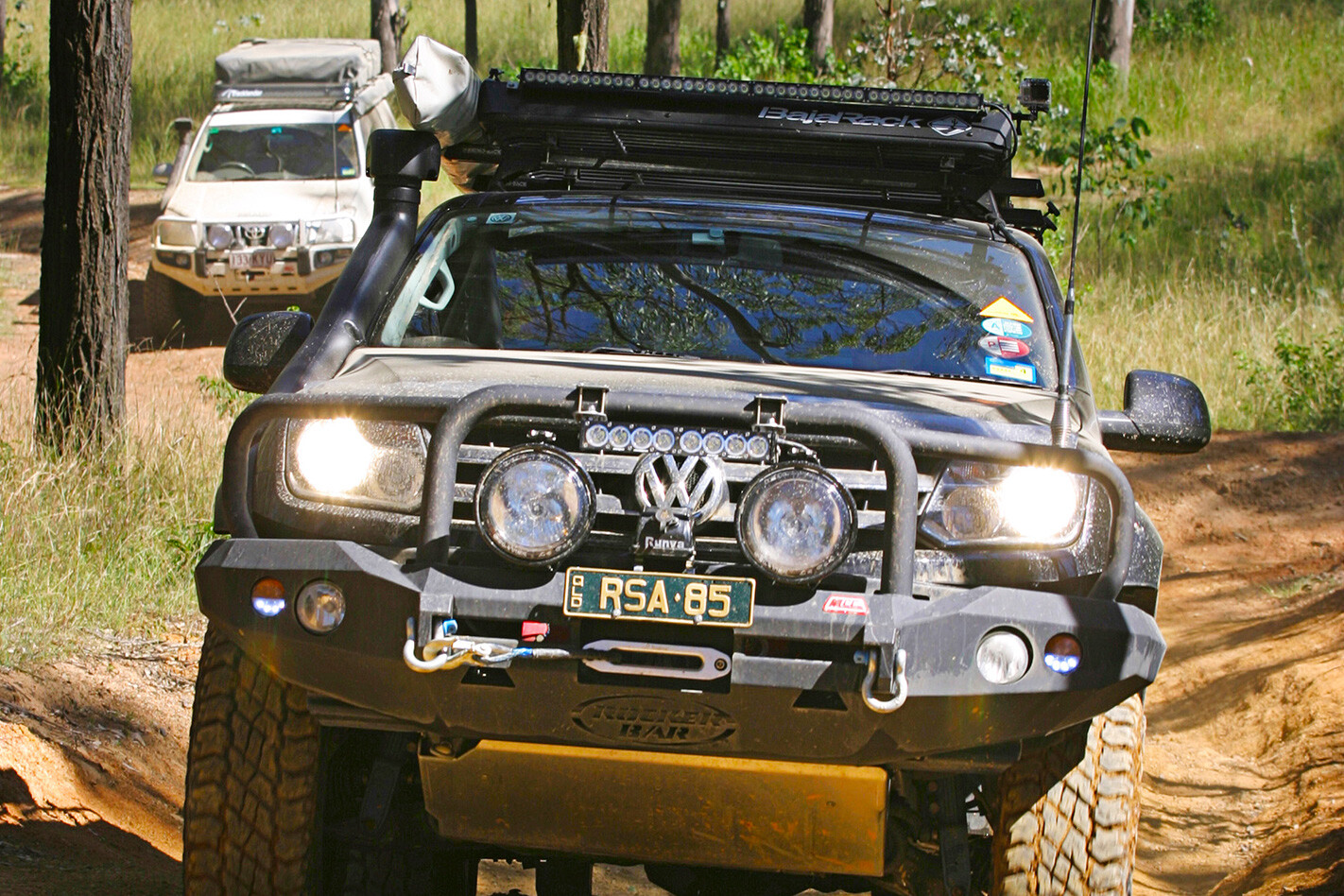 The comprehensive lighting package includes a pair of Baja Designs La Paz HID spotlights, supplemented with a 15-inch LED light bar, also from BD. A 40-inch BD light bar is mounted at the front of the roof rack, while two BD LED work lamps provide light at the back.

The roof-racks – yes there are two – are a Baja Rack Mega Mule, over the VW’s roof, with the smaller Mule mounted on Rhino Rack cross bars atop the canopy. Combined, the racks mount a Polaris awning on the driver’s side of the car and a high-lift jack and shovel mount on the near side. The canopy is a Sammitr stamped steel piece, and being made of steel, it has the same shiny black paint finish as the Amarok’s body panels.

Inside the canopy, a set of MCC roller drawers contain recovery gear and other essentials, while a 55-litre Primus fridge is accessible via an MSA drop-down slide. An ARB air compressor is mounted on the right-hand side of the drawers, with an outlet at the rear, while the left-hand drawer houses the second battery, as there’s no room for it under the bonnet.

A National Luna dual-battery kit manages the batteries, with a National Luna monitor showing the state of charge in each of them. 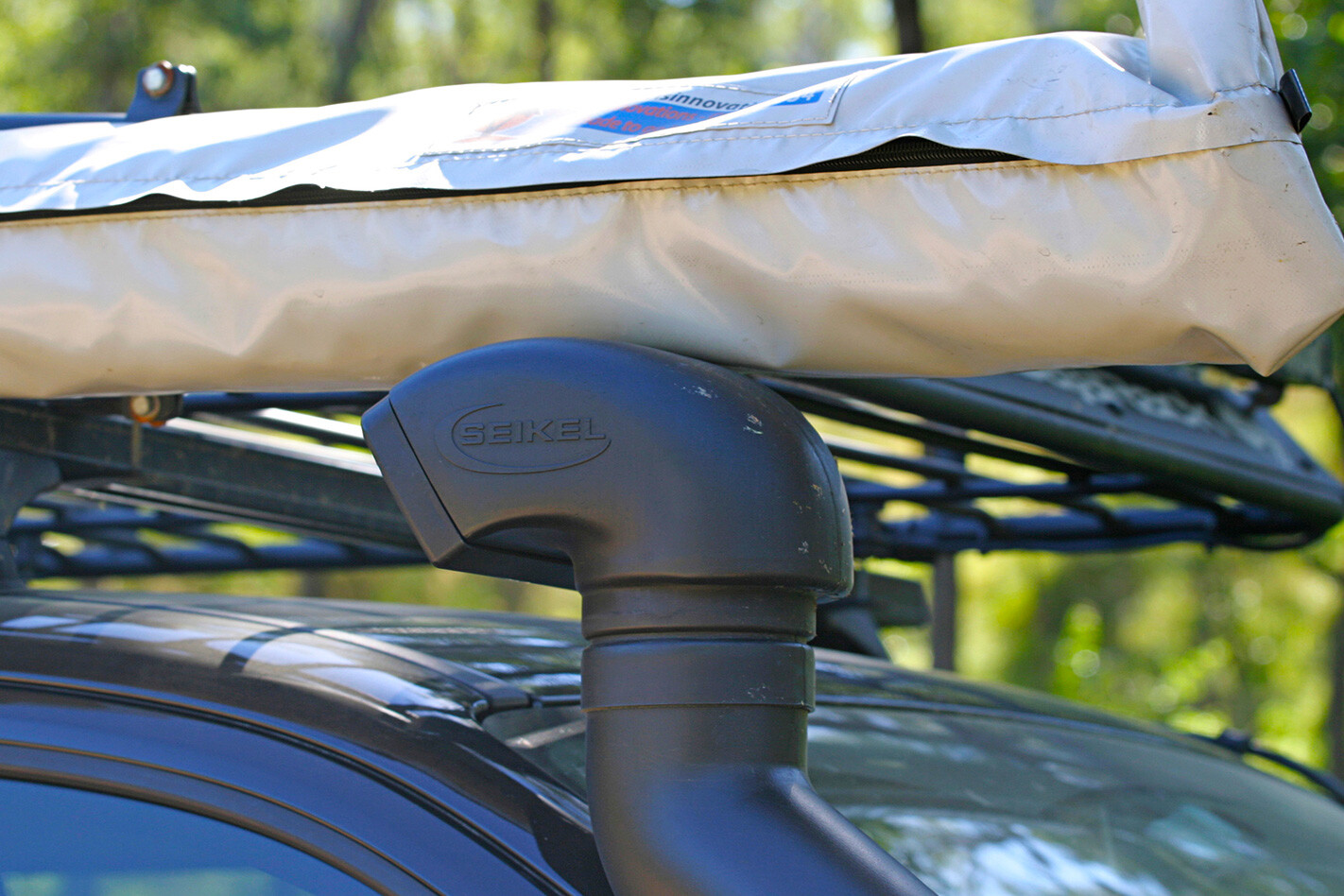 MSA seat covers protect the seats in the cabin and the audio system has been upgraded with a Zenec head unit and satnav system with a JL Audio 300W amplifier feeding a Focal sub-woofer and JL Audio speakers. A GME TX3340 UHF radio provides the comms and a remote readout displays the fridge temp to ensure the bevvies are always cold.

Under the bonnet, the factory 400Nm, bi-turbo 2.0-litre diesel engine remains unchanged, except that its air now comes via a Seikel snorkel. A retuned ECU is on the agenda to extract the most out of the already grunty little engine that Ashley says has been trouble-free for its first 47,000 kilometres. The only problem he’s had with the car was a clutch slave cylinder, which was replaced under warranty.

Riding shotgun in what must be one of Australia’s most impressive modified Amaroks, it was pleasing to discover that the upgraded suspension hasn’t messed with the standard vehicle’s impressive ride and handling; it remains soft and compliant, and keeps bodyroll well controlled while cornering, despite the higher centre of gravity.

It is testament to the quality of the components used in the build that it achieves this while improving the vehicle’s off-road ability with raised height and added ground clearance. Just what you want in an outback tourer be it in Australia or Africa.