Such is the case here, with Mazda referring to the chassis we're driving as its Next-Generation Platform. The timings are such - and the test mules being bodied as the current Mazda 3s - that we can safely assume that this will be, initially at least, the next-gen 2019 Mazda 3. 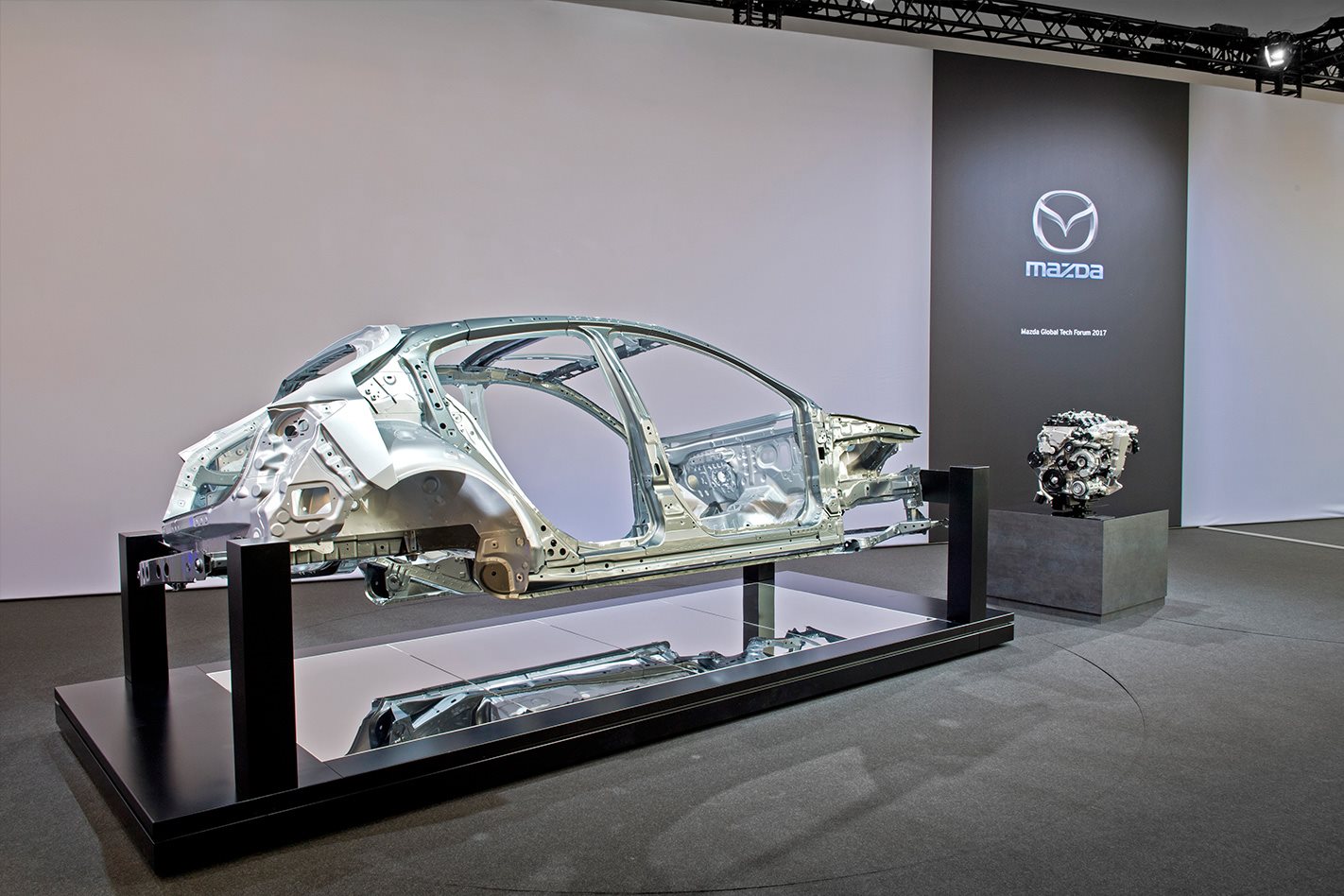 As you're probably aware, when we're this far out from production, any praise usually has the manufacturer strutting around like a pigeon, any criticism brushed off with the excuse that this is a pre-production concept, and that any such shortcomings will likely change by the time the vehicle rolls into dealerships. Nevertheless, what we've seen here is interesting.

The development of this platform focuses on three key factors which we'll look at in turn, namely a seat that moves together with the sprung mass of the vehicle, a body that transmits forces with minimal delay, and a chassis that helps mitigate the input of unsprung masses. Still with us? Good. It gets easier. 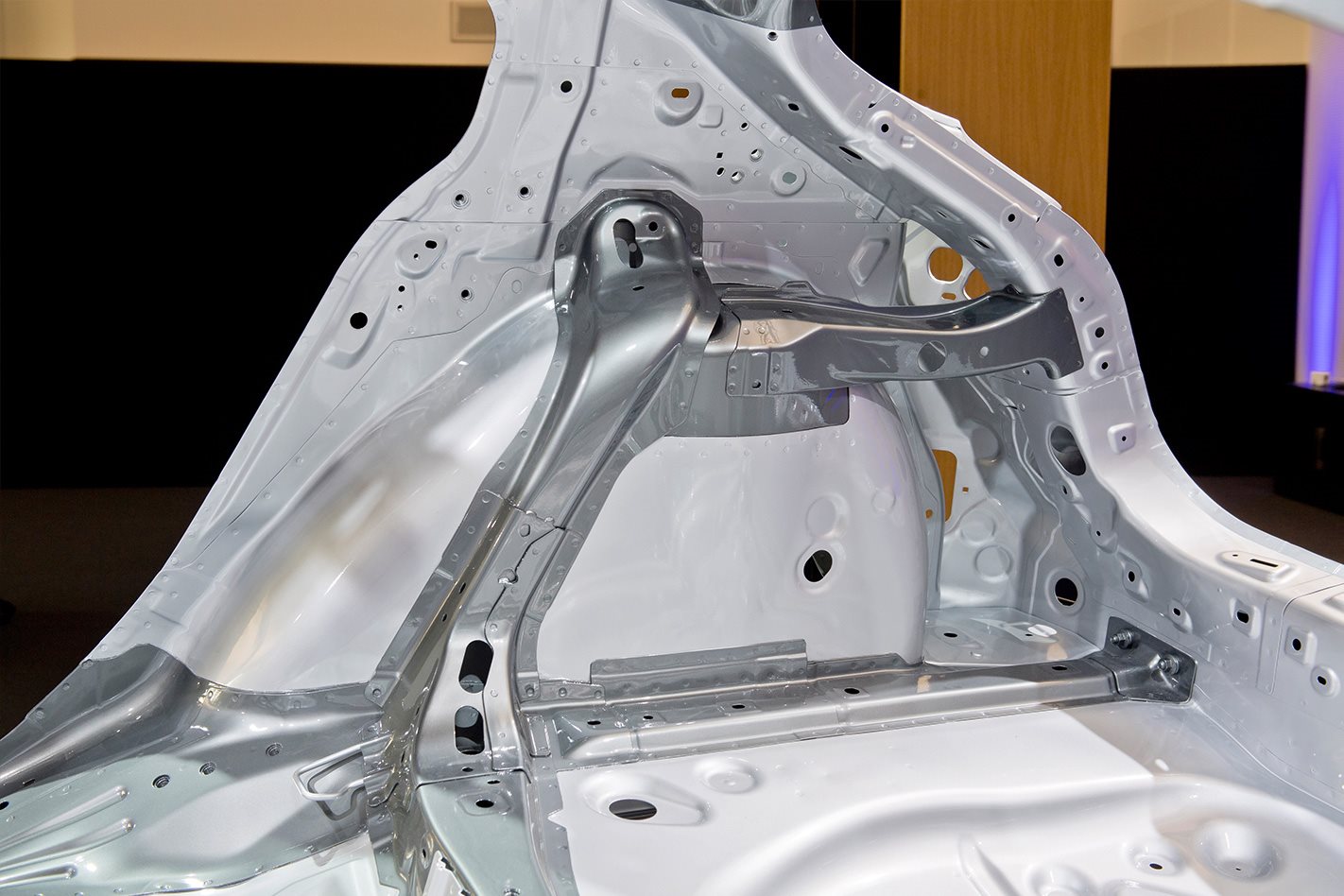 First up, that seat. Mazda has clearly thought long and hard about the way we sit in a car and has studied the motion of our spines when we walk. The seating position in this latest car aims to keep the pelvis upright and maintain the natural S-shape of the spine. Firmer seats keep this compression axis stable and allow the natural and opposite movements of the pelvis and upper body, allowing the head to remain stable.

The seat frame is therefore reinforced in these key areas, the result being a reduction of up to 83 percent in lateral pelvic displacement. It still feels comfortable, but you're aware that something is slightly different. Once you've set your driving position, you're well supported and head toss – that annoying shaking and bobbing of your head that's so prevalent in poorly-damped cars – is notably absent. 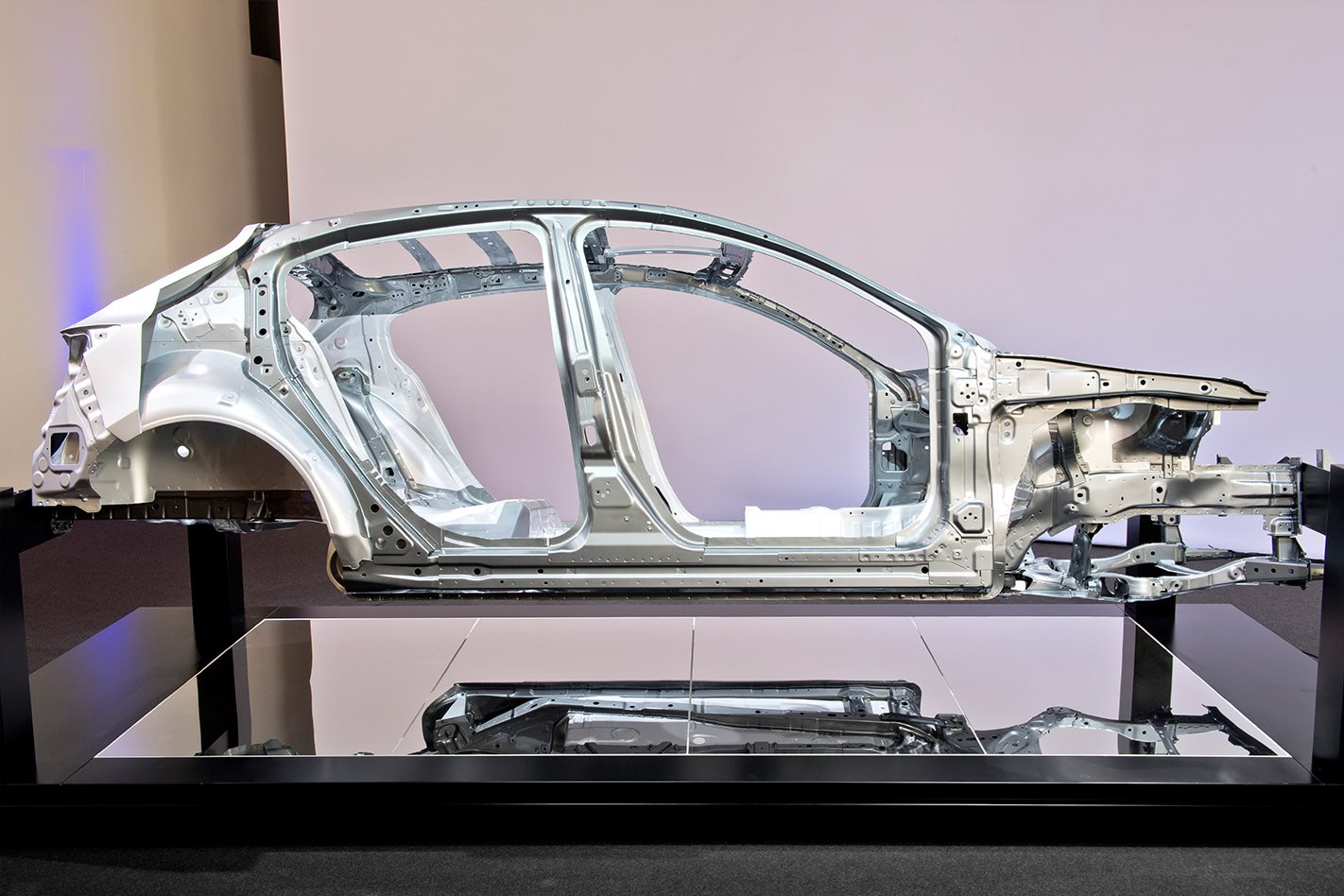 The car's body has also undergone a number of changes over the current Mazda 3. Traditionally, a car like this is built with three rectangular frames – across the front bulkhead, across the B-pillar, and then at the rear bulkhead. Mazda has engineered a multi-directional ring structure into this latest chassis, with diagonal energy paths between the rigid front and rear damper mounts. The result is that the latest body transmits flexion from front to rear dampers 30 percent quicker than before.

As well as improving body stiffness, it has worked to reduce noise, with 16 vibration-damping elastomer mounts inserted within the body structure that dissipate unwanted vibrations into heat energy. These damping nodes and bonds help reduce the rapidity at which noise signals change, something that our brains process as unpleasant. Slow that transition in the way that sounds change in either amplitude or frequency and the car is perceived as less acoustically harsh. 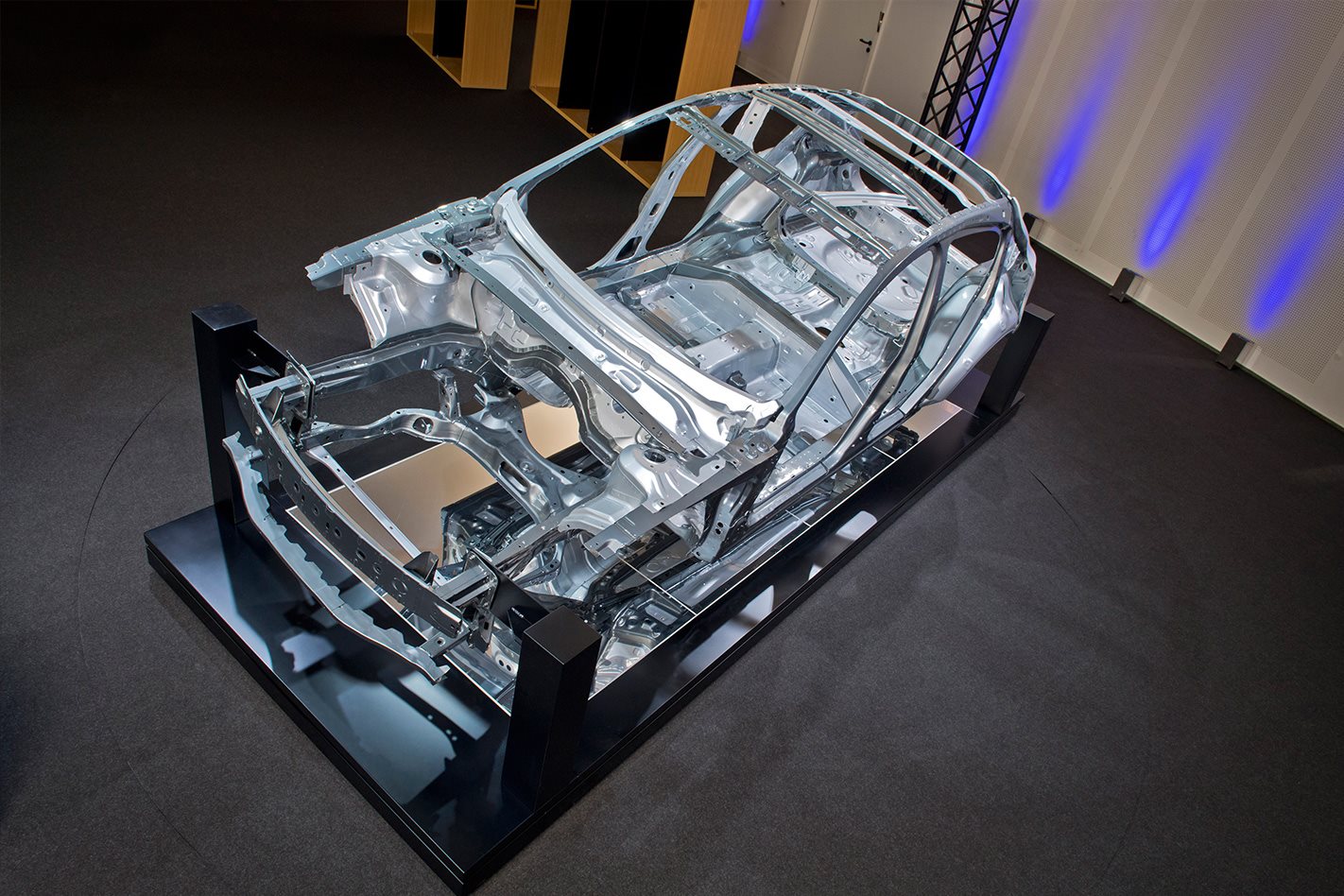 The final area that Mazda focused on was to smooth the control of timing of the unsprung masses – i.e. the wheels, tyres, brakes, and everything else that's isolated from the passenger cell by the car's suspension. Fitting a tyre with a softer sidewall is the first step, reducing front/rear wheel travel with a new design of bush is another, while a greater angle of the front suspension arm means that Mazda has far finer control over the timing at which these components work in concert.

Sounds great doesn't it? You're probably waiting for the 'but' and we cannot lie, there's a big one. Get underneath the car and it's apparent that Mazda has replaced the previous generation 3's multi-link rear suspension system with a torsion beam setup. When asked why, Hiroyuki Matsumoto, General Manager of the Vehicle Development Division said, “It is simpler. Simpler to tune.” Such expediency seems a shame. To have gone to the lengths Mazda has in order to build a class-leading chassis only to hobble the thing with a torsion beam rear when the car has built its reputation with a multi-link setup seems almost perverse. 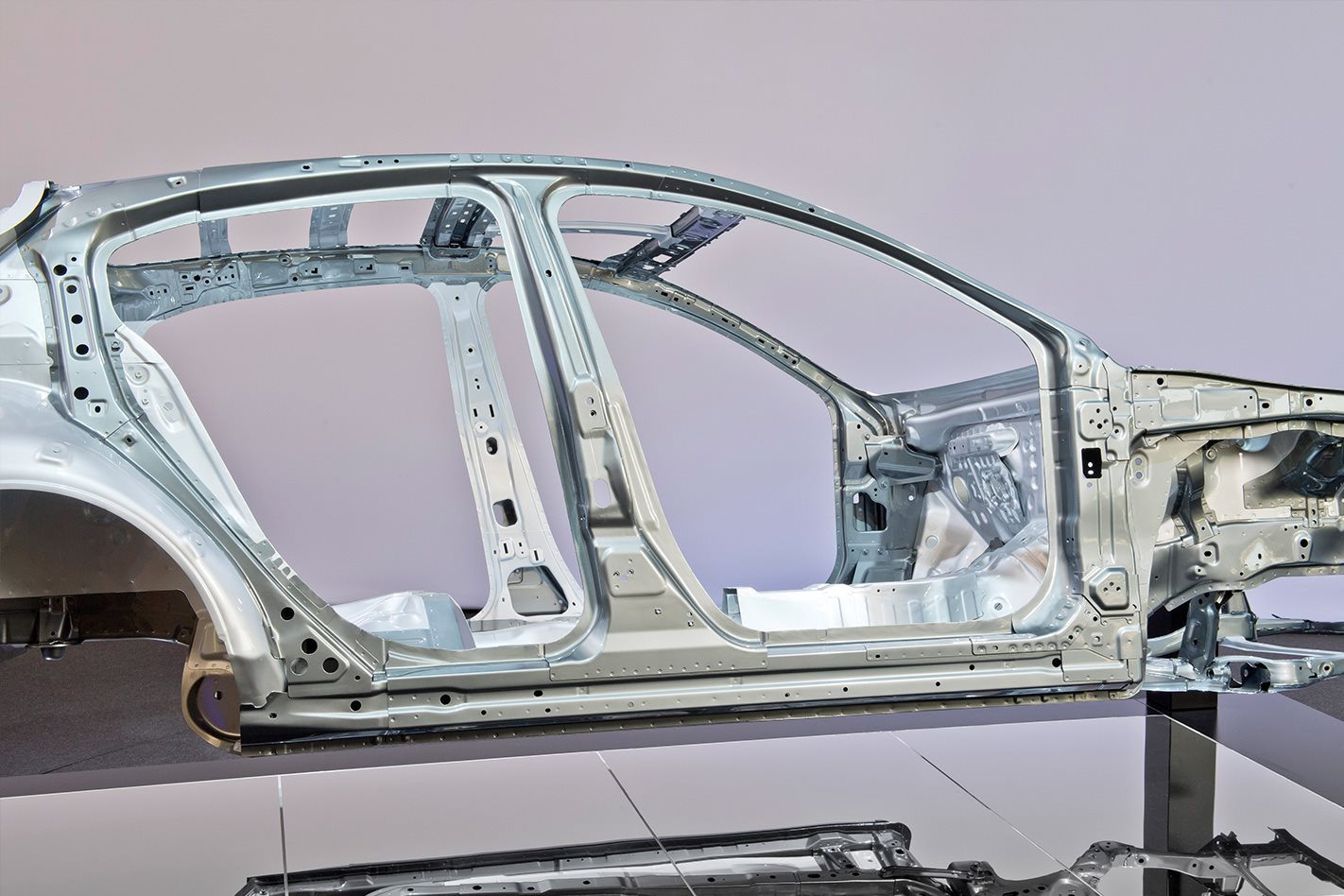 While there are some great hatches with twist-beam back ends, amongst which we'd count the Renault Mégane and the Vauxhall Astra, it's clear in the way the Mazda Next Gen Platform goes down the road that it's not quite in that class yet. Obviously much can change in the next two years, but both noise transmission and secondary ride at the rear aren't where the car needs to be right now.

Other aspects draw praise. The electrically-assisted steering feels quiet and accurate without delivering too much in the way of detailed communication about what's going on at the front contact patch. The brake-by-wire system is also good, although a little calibration work still needs to be done in its pedal modulation. In terms of driver appeal, the chassis feels slightly shy of a current-gen Golf 7.5, rather just a tad better than the latest Hyundai i30, which means it's very good, if not class leading. It'll be interesting to see how the platform develops over time, but when paired with the fiendishly clever Skyactiv-X spark-controlled compression ignition petrol engine, the next-generation Mazda 3 might be one heck of an all-rounder.