Mazda builds game-changing engine that aims to achieve the impossible

Here are a few questions for you to chew over. What was the last big thing in motoring technology? Tesla making electric vehicles desirable? The Toyota Prius bringing hybrid powertrains to the masses before that?

And prior to that? Possibly Audi's quattro bringing four-wheel drive out of the farmer's paddock.

We've seen a few false dawns such as twin-clutch transmissions and downsized turbo engines that promised much but struggled to deliver, and there's little doubt that autonomous driving tech will be the next big disruptive change. But there's still space for genuinely innovative steps forward and Mazda might just have made a breakthrough that could have huge developments for the longevity of the internal combustion engine. 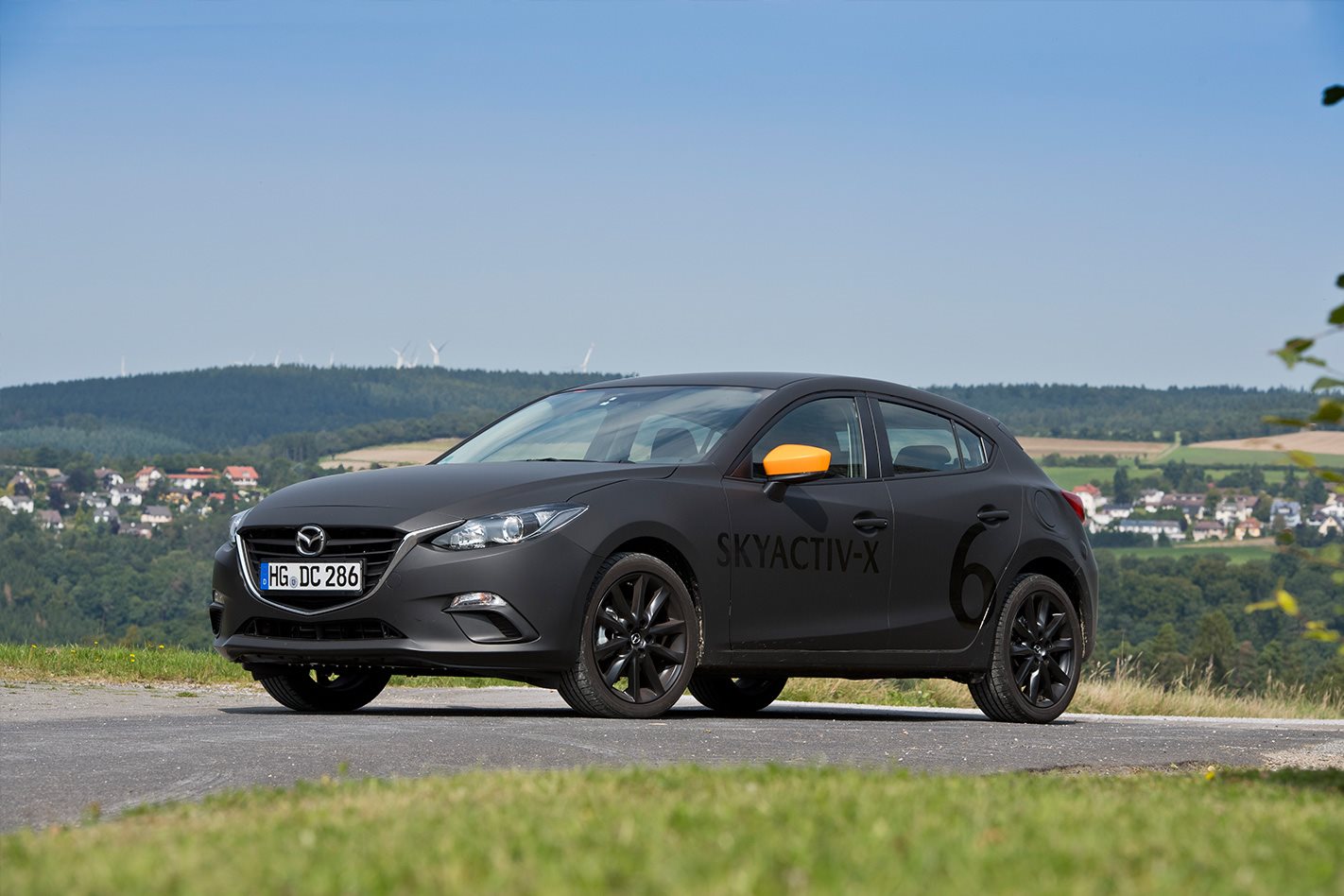 By most accepted measures, the internal combustion engine is a dead man walking. New legislation appears almost every week from one country or another, putting an end date to sales of ICE engines. Investing in a technology with such an explicit sell-by date seems foolhardy at best, but Mazda is playing a long game. Its latest Skyactiv-X petrol engine delivers something that many manufacturers have poured huge R&D funds into, but have never been able to master – compression ignition.

Squashing an air/fuel mixture until it spontaneously combusts has, until now, been the preserve of diesel engines. In 2008, Mazda started a project to develop a true Homogenous Charge Compression Ignition (HCCI) powerplant, but like Daimler who had tried this before, was defeated by the technical challenges. Mitsuo Hitomi, Mazda’s Managing Executive Officer in charge of Technical Research Center and Integrated Control System Development takes up the story. 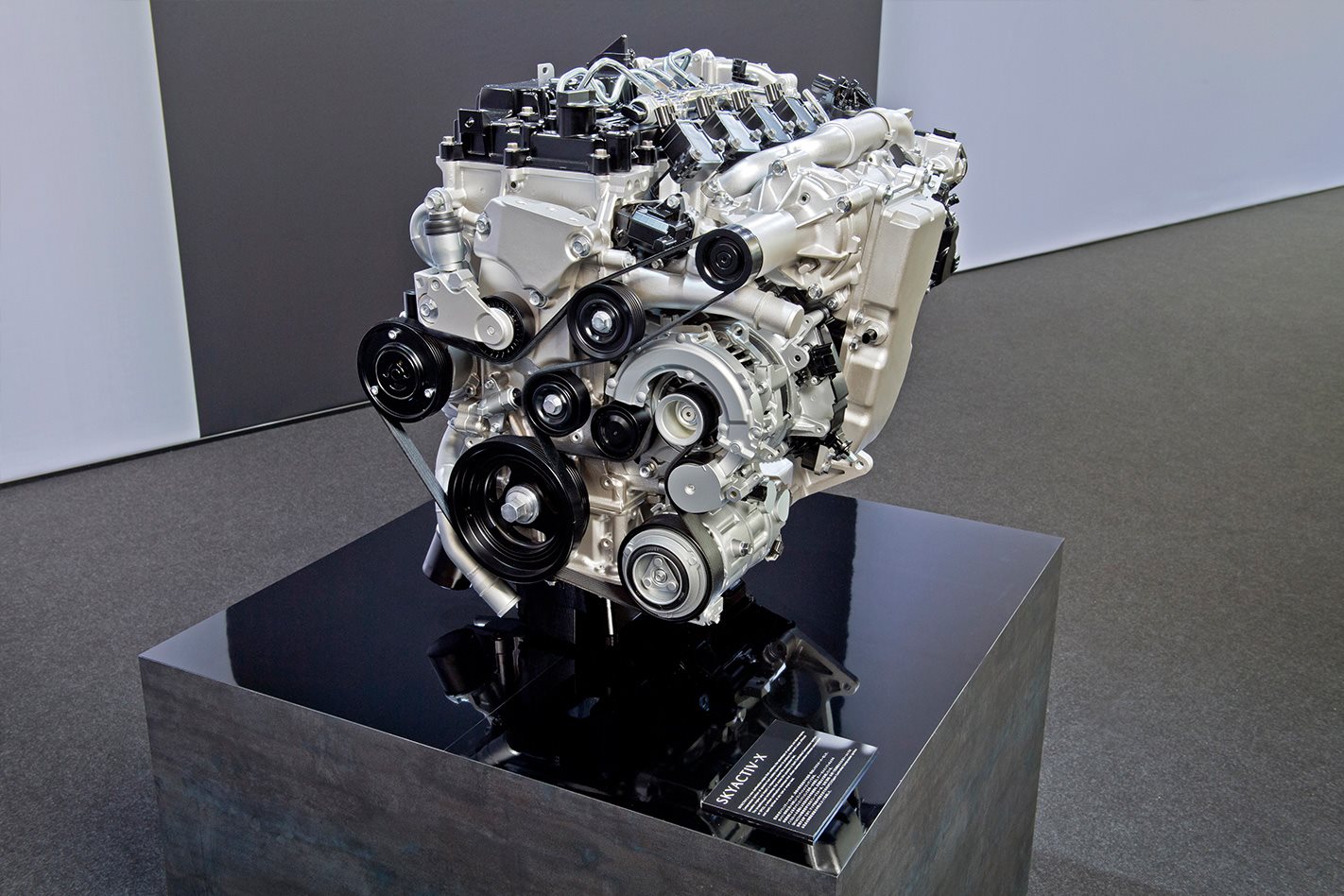 Reintroducing spark plugs would at first appear to be a capitulation in the quest for sparkless ignition, but the Hiroshima-based company's masterstroke was to use the spark plugs as a control mechanism in the combustion process.

In order for any of this to work, a radical approach to fuelling was first required. The SkyActiv-X engine has a hefty Rootes-type supercharger bolted to its front end and its job is to throw huge quantities of air into the combustion chamber. Normally, this is matched by a commensurately stiff measure of fuel, thus developing plenty of power, but Mazda realised that in order for compression ignition to occur, the air/fuel mix had to be incredibly lean.

Your car probably mixes air and fuel in a typical stoichiometric 14.7:1 ratio. The SkyActiv-X engine, in its lean spark ignition mode, burns in a 29.4:1 ratio and, when operating in ‘pure’ compression ignition mode, ups that to 36.8:1. Hence the need for the supercharger to get that huge quantity of air into the combustion chamber at low rpm. 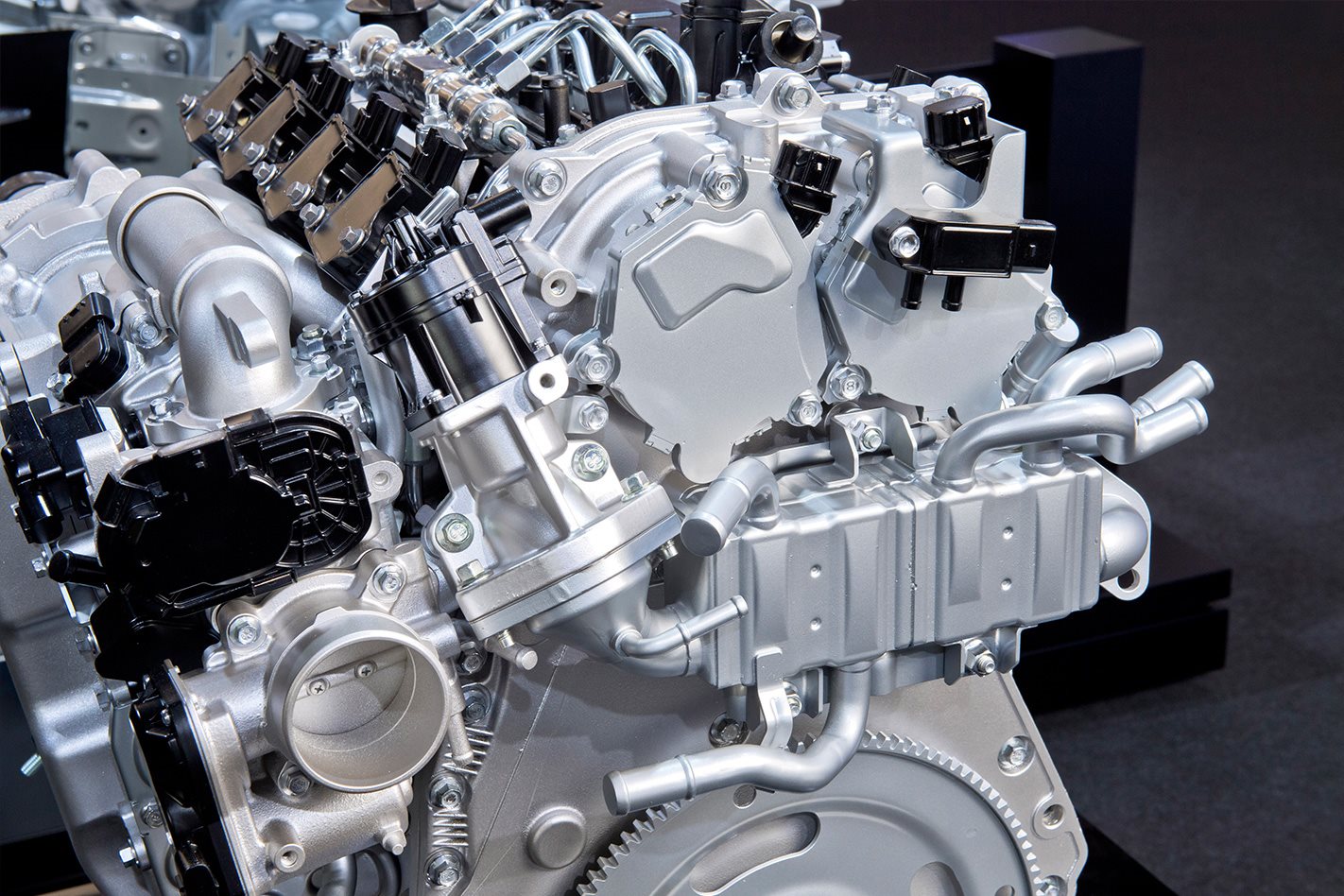 Try to ignite fuel at that ratio and the flame inside the combustion chamber won't propagate very far and you'd develop a wholly feeble power output. In such instances, the SkyActiv-X powerplant uses the small fireball from spark ignition as a sort of secondary piston, effectively raising pressure in the rest of the chamber such that compression ignition can occur.

The calibration required to control this Spark Controlled Compression Ignition (SCCI) process is dizzyingly complex, Mazda wheeling out a series of charts demonstrating at which points in the rev range 'true' compression ignition was occurring and where more traditional spark ignition was doing much of the heavy lifting. Developing a stable switching point between the two was a huge technical challenge.

Getting behind the wheel of one of the test mules was instructive. First off, no, it doesn't sound like a diesel. It's marginally more sibilant than a conventional petrol engine but not by much. Rolling gently onto the throttle pedal provoked a half-second diesel-like flutter of pinking, but Mazda is confident that this can be calibrated out of existence by the time the engine is ready for production. Otherwise it's wholly transparent tech. The engines as tested made 190hp and 230Nm, and Mazda promised the performance of a 2.0-litre MX-5 with the economy of a 1.5-litre Mazda2 diesel. 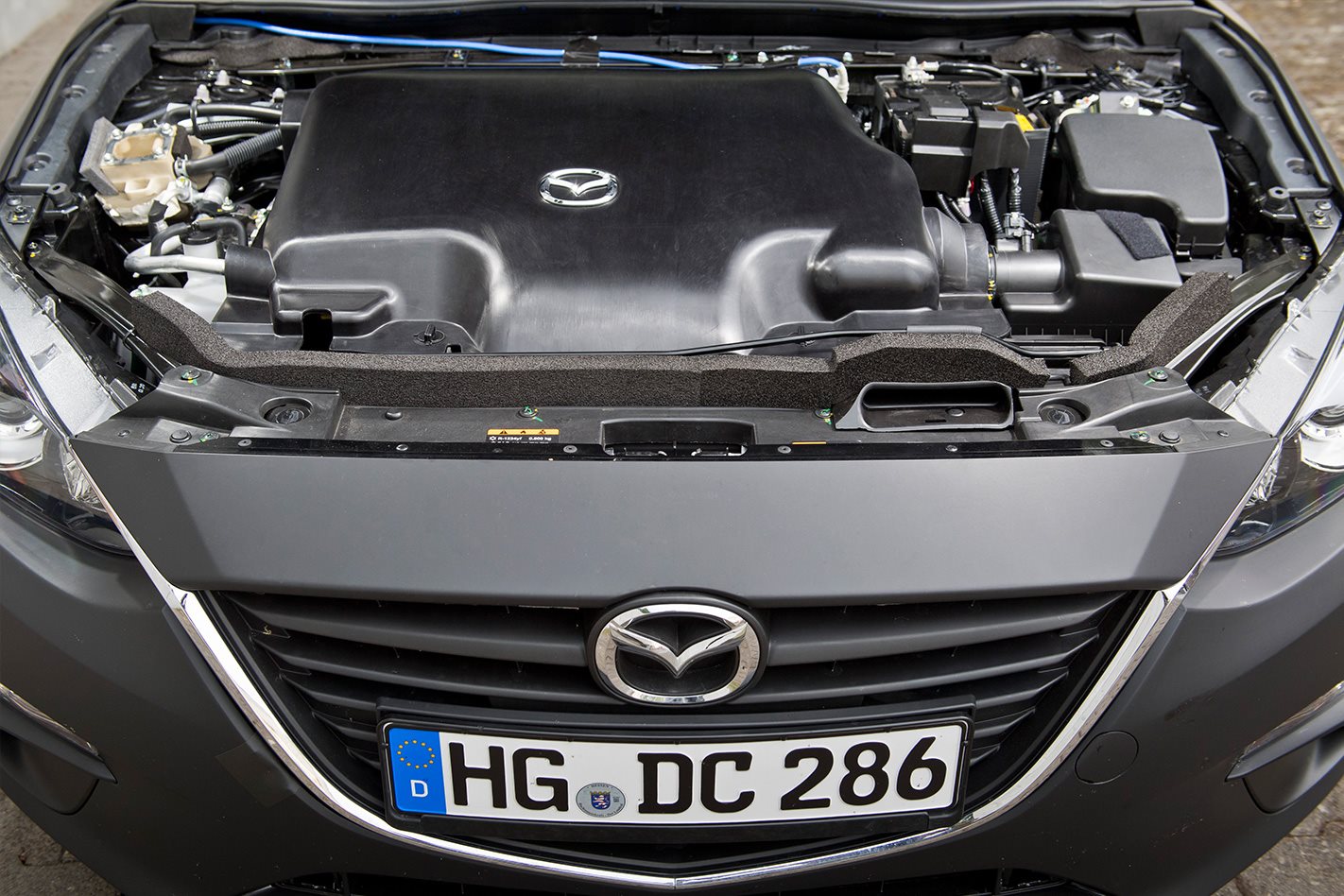 Driven with a fairly light right foot, I managed 5.3L/100km on an 86km test route. That's remarkable for an engine with that power output. “At higher loads, the supercharger isn’t required. We can get enough air into the engine,” explains Mazda Motors Europe development engineer Heiko Strietzel. “Because of the supercharger, the engine is slightly heavier than the old 2.0-litre. We’ve strengthened the crankshaft and the bearings, but it’s nowhere near as heavy as a typical 2.0-litre diesel engine,” he explains.

The engine has clearly been designed for future electrification, and mild hybridisation would appear to be a perfect partner for compression ignition tech – with an electric motor delivering instant low-end torque and subtly extending the range in which the engine can operate in SCCI mode. “We’ll combine a hybrid system with this engine, but it will be a mild hybrid, not strong,” confirmed Hitomi.

Another huge benefit of this engine architecture – especially in the Australian market – is that it actually returns better fuel economy on low octane fuels. It sounds utterly counterintuitive at first that 91 RON would be the preferred juice, but consider for a moment that many modern engines can't operate on this fuel for fear of pre-detonation in the combustion chamber, something that compression ignition, in effect, strives for. 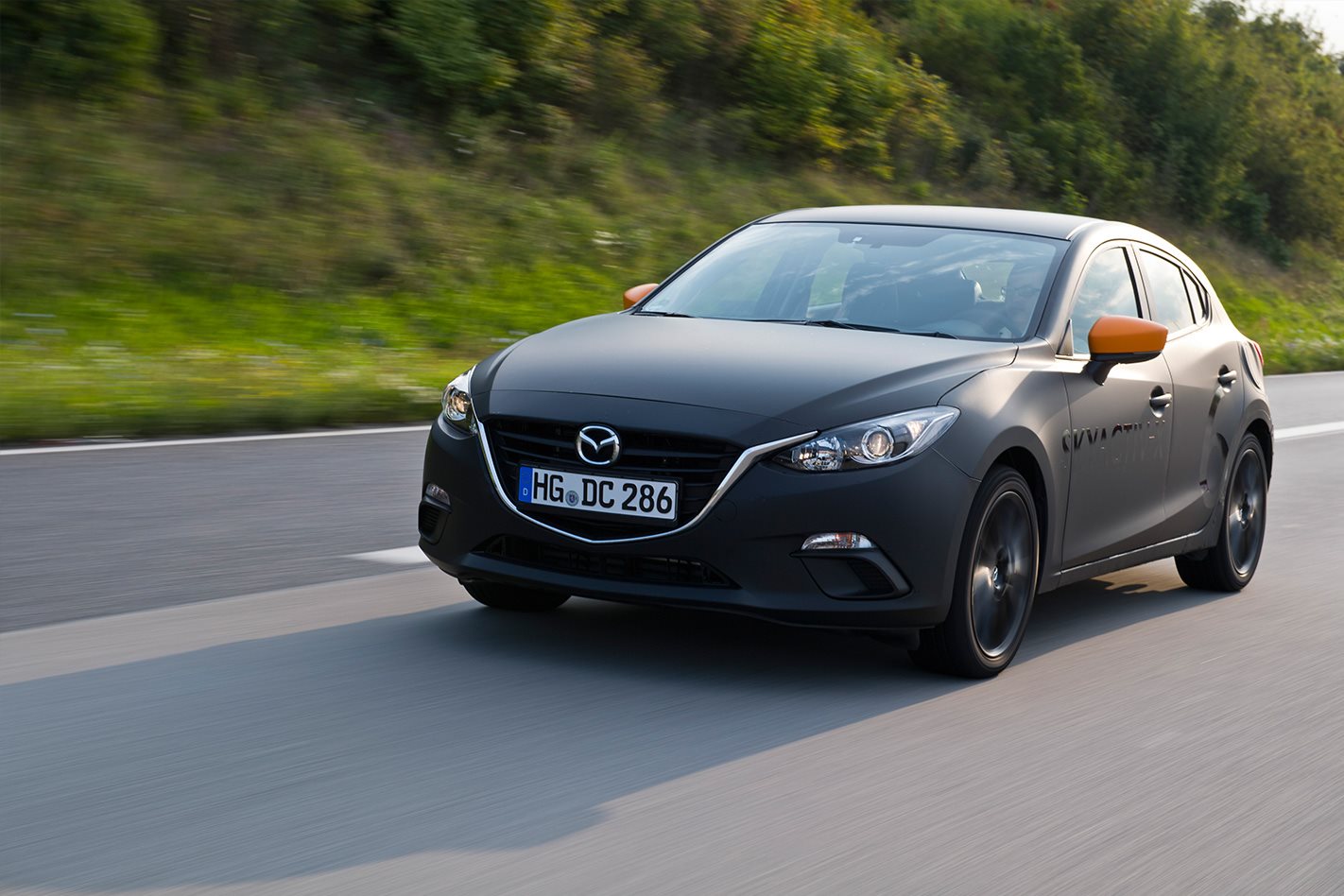 Peak power output would be slightly lower, but economy would be boosted. “At lower to medium rev ranges, the lower RON gasoline is more reactive. It’s very convenient for this combustion concept,” Hitomi explained.

Mazda is confident of the scalability of this unit, and it's likely that we'll first see it on the market in the next-gen Mazda 3, due in 2019. Between now and then, the engine has to undergo a whole battery of durability tests in hot and cold climates, but Mazda seems confident that the tech is 90-95 percent production-ready. Significant challenges remain, largely in fine-tuning the huge list of variables in the engine calibration.

“If you change one point on this parameter, and five points on this parameter, the combination becomes 50 billion [possible outcomes]. Then we have to set one point. Big challenge. There’s a lot of work to do to achieve target fuel economy and satisfy emissions regulations,” said Hitomi. The company also promises to continue development of its existing SkyActiv-G petrol engines and SkyActiv-D diesel units.

Delivering the power output and refinement of a petrol engine with economy and CO2 emissions that look more like a diesel seems a pipe dream, but Mazda is confident that, with SkyActiv-X, we can have our cake and eat it too. It’s part of Mazda’s vision to reduce well-to-wheel CO2 figures to 50 percent of 2010 levels by 2030.

The next big thing in automotive technology? We'll wait until the production version is ready before issuing a definitive verdict, but early signs suggest that Mazda might well pull it off. 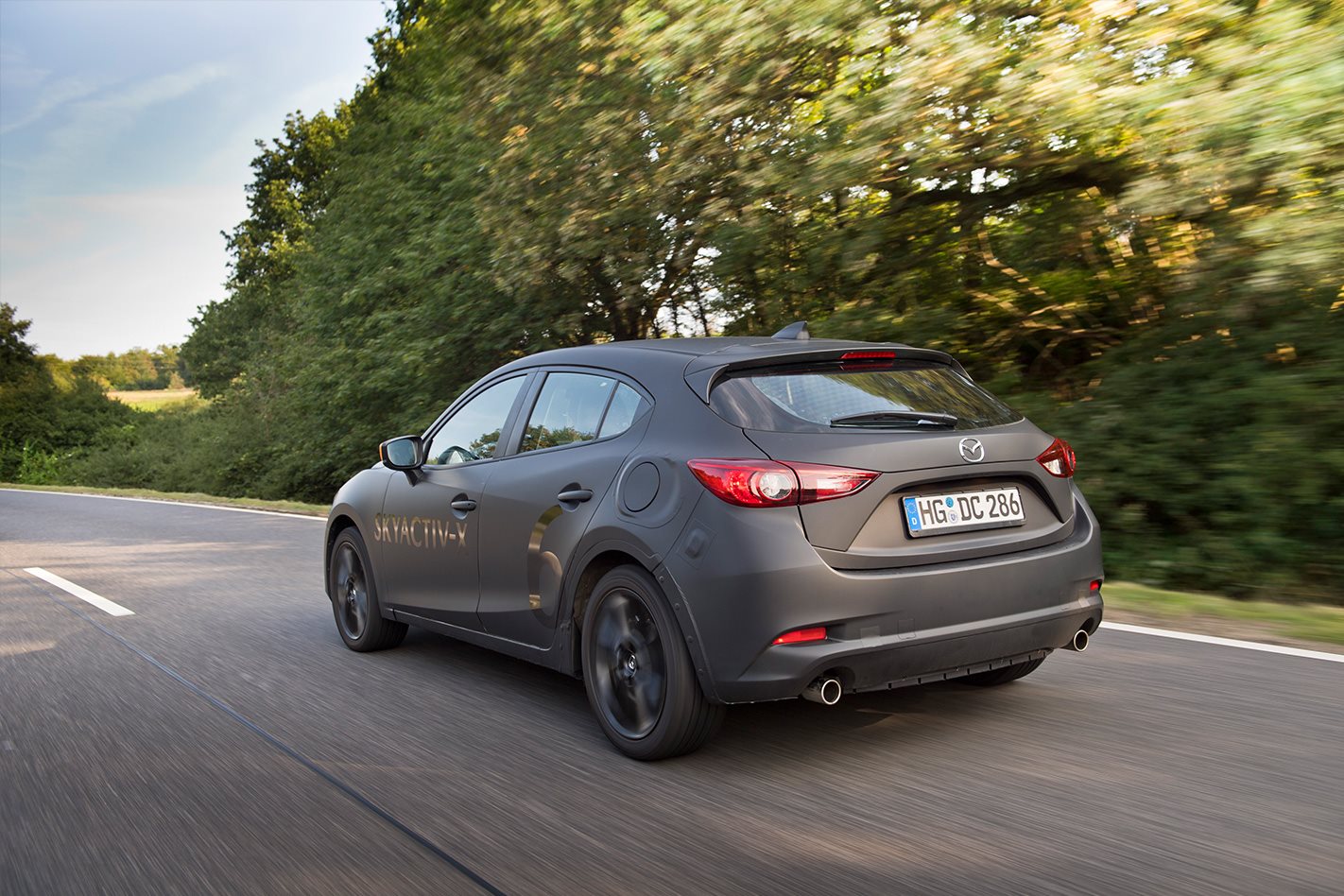 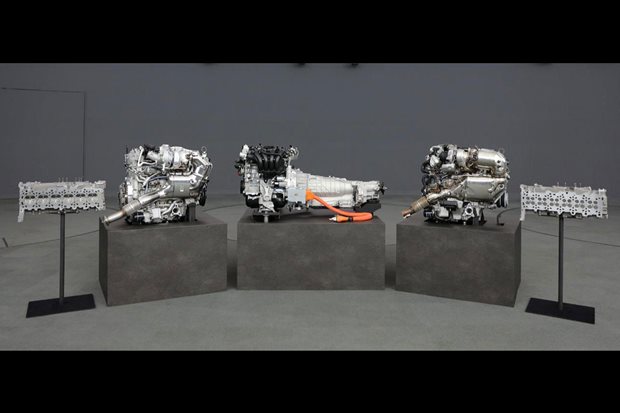