Hybrid cars are big news in Australia right now. Not only can they save you money at the petrol station, they are kinder on the environment. Many brands from Toyota to Porsche, Mercedes-Benz to Mitsubishi offer petrol-electric hybrid new cars.

Here’s our list of the best hybrid cars on sale in Australia. Naturally Toyota, with the longest history of hybrids, dominates the lineup, however with manufacturers across the globe rolling out more extensive petrol-electric ranges of their own, this list could look quite different around this time next year. 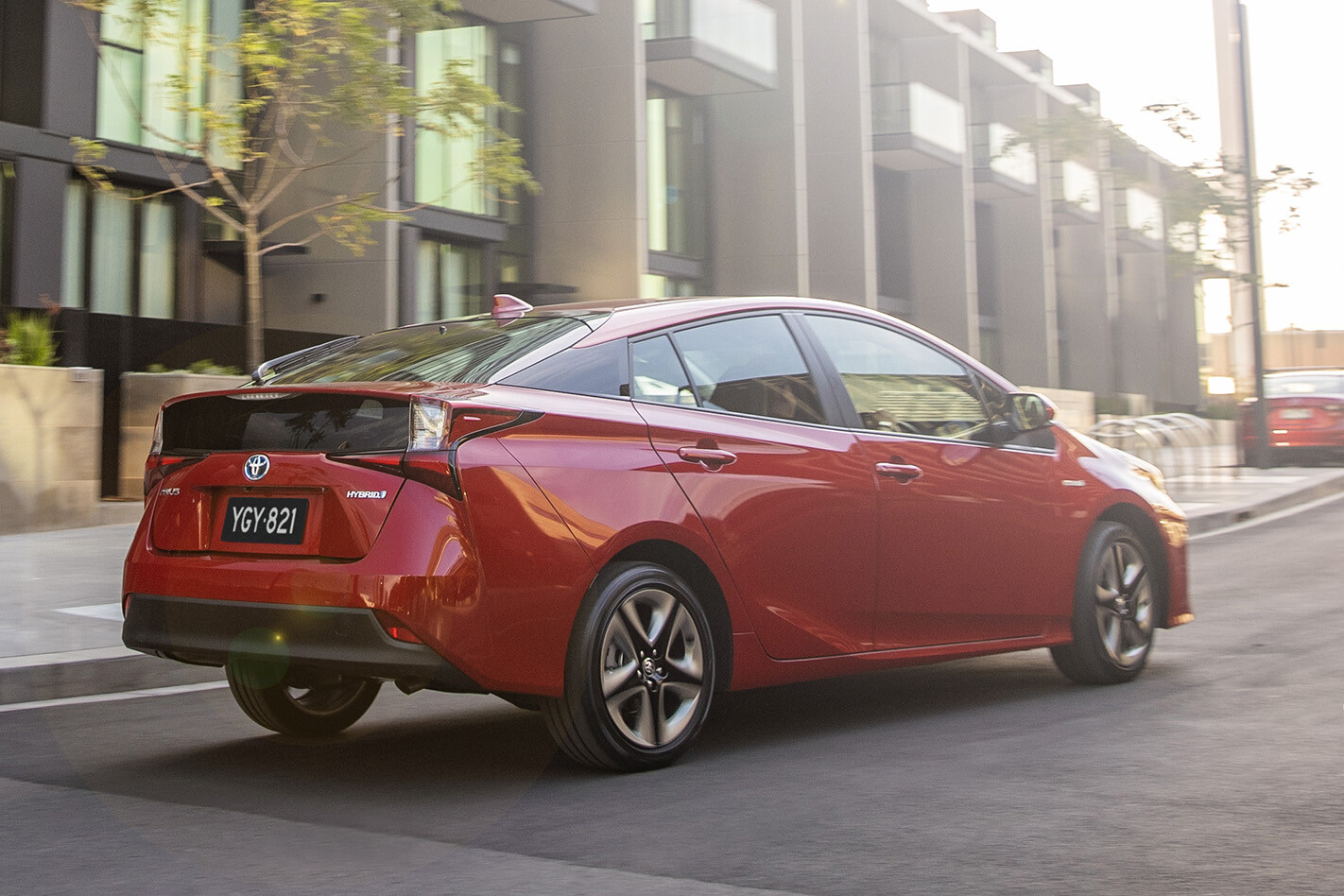 The Toyota Prius cuts fuel bills almost in half, compared with many other small cars, by teaming a petrol engine with an electric motor. It has distinctive styling, with sharp angles and a sleek silhouette. A comprehensive safety package includes auto braking as standard, and this new Prius feels much better to drive than its predecessor.

MORERead more about the Toyota Prius

The RAV4 in its base form is already a hugely impressive vehicle within the mid-size SUV segment – and a firm favourite here at WhichCar – but its hybrid derivatives are proving a sell-out success in Australia. Not hard to see why, with an easy-going driving experience, affordable pricing and big-wagon practicality all being combined with genuine fuel-sipping performance.

MORERead more about the Toyota RAV4 The 12th-generation Toyota Corolla brings all the necessary ingredients that have long made it the world’s most popular car, but in a stylish package that’s considerably more fun to drive than its predecessor. The Hybrid augments a 1.8-litre, four-cylinder petrol engine with a battery-driven electric motor. When you brake, it reclaims energy that is normally wasted, using it to recharge the battery and hence to propel the car. That makes a big difference to fuel use, and particularly around town where you’re braking a lot. Unlike before, the hybrid option is now available across all Corolla grades.

MORERead more about the Toyota Corolla 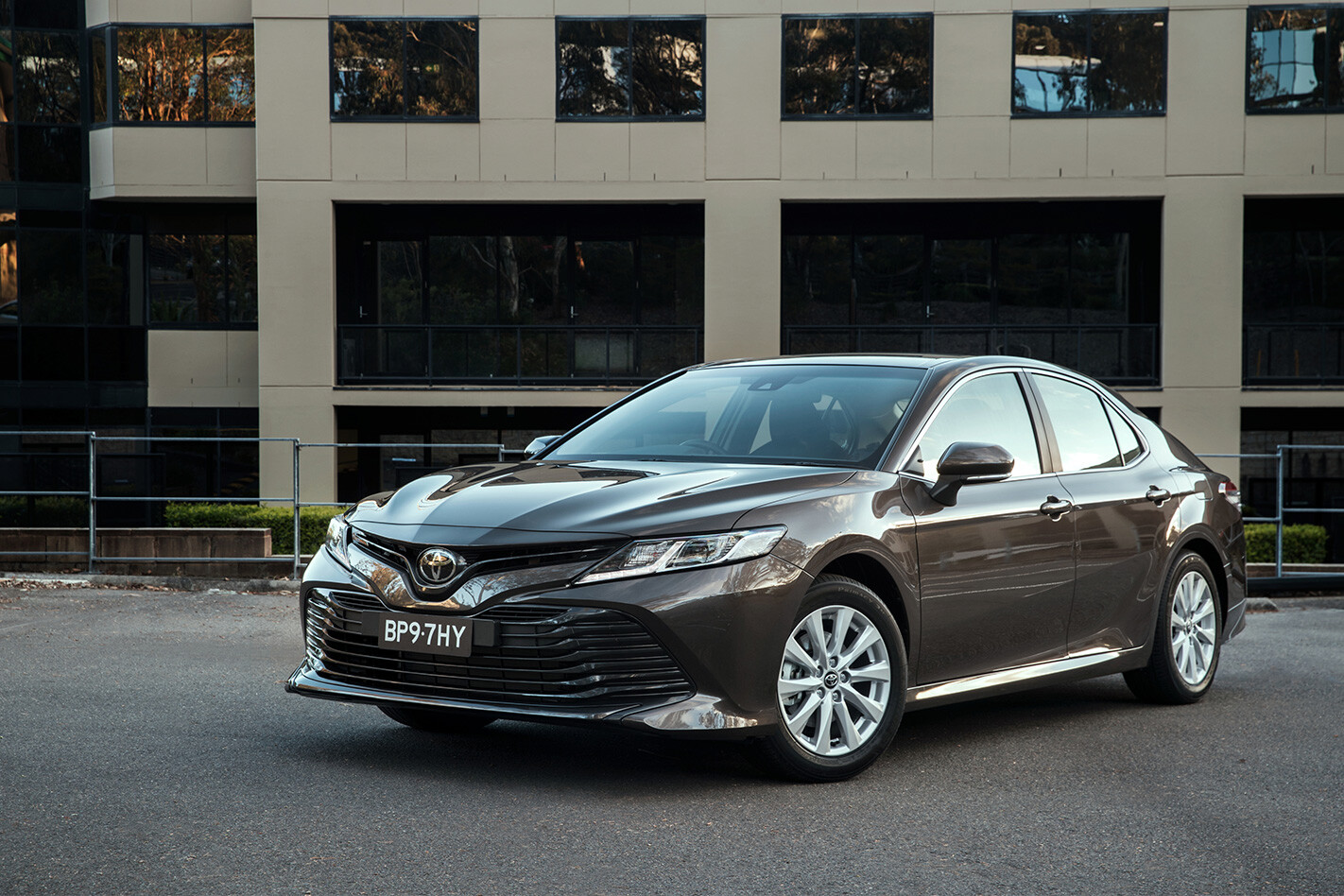 The new fully-imported Camry takes off where the Aussie-built models left off as Australia’s best-selling medium car by far. You get a lot for the money, with plenty of space and the option of hybrid power. The Camry is also good to drive, with nice balance, and in hybrid form a responsive drivetrain.  The hybrid powertrain uses the least fuel, consuming just 4.5 litres/100km in the official test (urban and rural combined), which is less than smaller Prius V hybrid.

MORERead more about the Toyota Camry

This one’s a bit special, because the Ioniq can be had in both regular petrol-electric hybrid guise AND a more electron-enhanced plug-in hybrid version. Both will save you fuel and both are fine small hatches in their own right, but the plug-in can deliver big reductions in running costs if you take full advantage of its wall-charging ability – and can stomach its higher sticker price.

MORERead more about the Hyundai Ioniq

The UX is easily one of Lexus’ most impressive models right now, with compact proportions, eye-catching design, a lovely interior and great driving dynamics all putting this entry-level premium SUV in good stead.

The hybrid UX 250h adds exceptional fuel economy on top of all those virtues, as well as an ultra-refined powertrain for an extra smooth driving experience. You can get it with AWD too, but to be honest the front-wheel drive UX 250h should be all you need.

MORERead more about the Lexus UX

Lexus has been doing hybrids for a long time, and the RX 450h is one of the brand’s best. Not necessarily because it’s super-efficient (its 5.7L/100km claim is a bit difficult to achieve in the real world), but because it’s quiet, silky-smooth, yet commendably powerful.

With a big-capacity V6 under the bonnet and a power output of 230kW when both petrol engine and electric motor are working together, this big SUV isn’t short of muscle.

MORERead more about the Lexus RX

Following on from the excellent template set by their XC60 stablemate, the S60 sedan and V60 wagon are simply superb in plug-in hybrid T8 guise. Packaging that electric hardware is a little tougher in their smaller bodyshells, but it’s not something you or your passengers are likely to notice. What you WILL notice is heaps of power and low running costs.

MORERead more about the Volvo S60

Audi’s electrified big SUV isn’t cheap at just a smidge below $140K, but it’s huge on the inside, hugely powerful under the bonnet, and boasts a startlingly low claimed fuel consumption of just 1.9 L/100km. That number is of course dependent on you making the most of its plug-in capability and electric-only drive mode, but for a big wagon the Q7 etron has a light environmental footprint.

MORERead more about the Audi Q7

The 330e differs from most of the other hybrids on this list by offering a plug-in capability, which means you can charge up its battery from your household power supply and drive for around 30km on battery power alone. That’s enough to take care of the average commute for most people, meaning visits to the petrol station could be mercifully infrequent.

MORERead more about the BMW 3 Series The Volvo XC60 is an exceptionally comfortable luxury medium SUV, featuring a choice of turbocharged petrol and diesel powertrains including a plug-in hybrid in the T8 variant. All-wheel drive adds security on slippery surfaces and it is one of the safest cars on sale. It was named 2018 Wheels Car of the Year – the first premium SUV to win the title. The T8 R-Design PHEV (plug-in hybrid electric vehicle) features a powerful 2.0-litre four-cylinder supercharged and turbocharged petrol engine that runs with a battery-powered electric motor.

MORERead more about the Volvo XC60

Keen on putting a hybrid in your garage but your budget isn’t big? Toyota’s Yaris-sized Prius C may be basic, but it boasts an affordable price and a thrifty hybrid powertrain that sips a claimed 3.9L/100km on average. For inner-urban folks, it’s got the right size and the right thirst for dealing with densely-packed city streets. 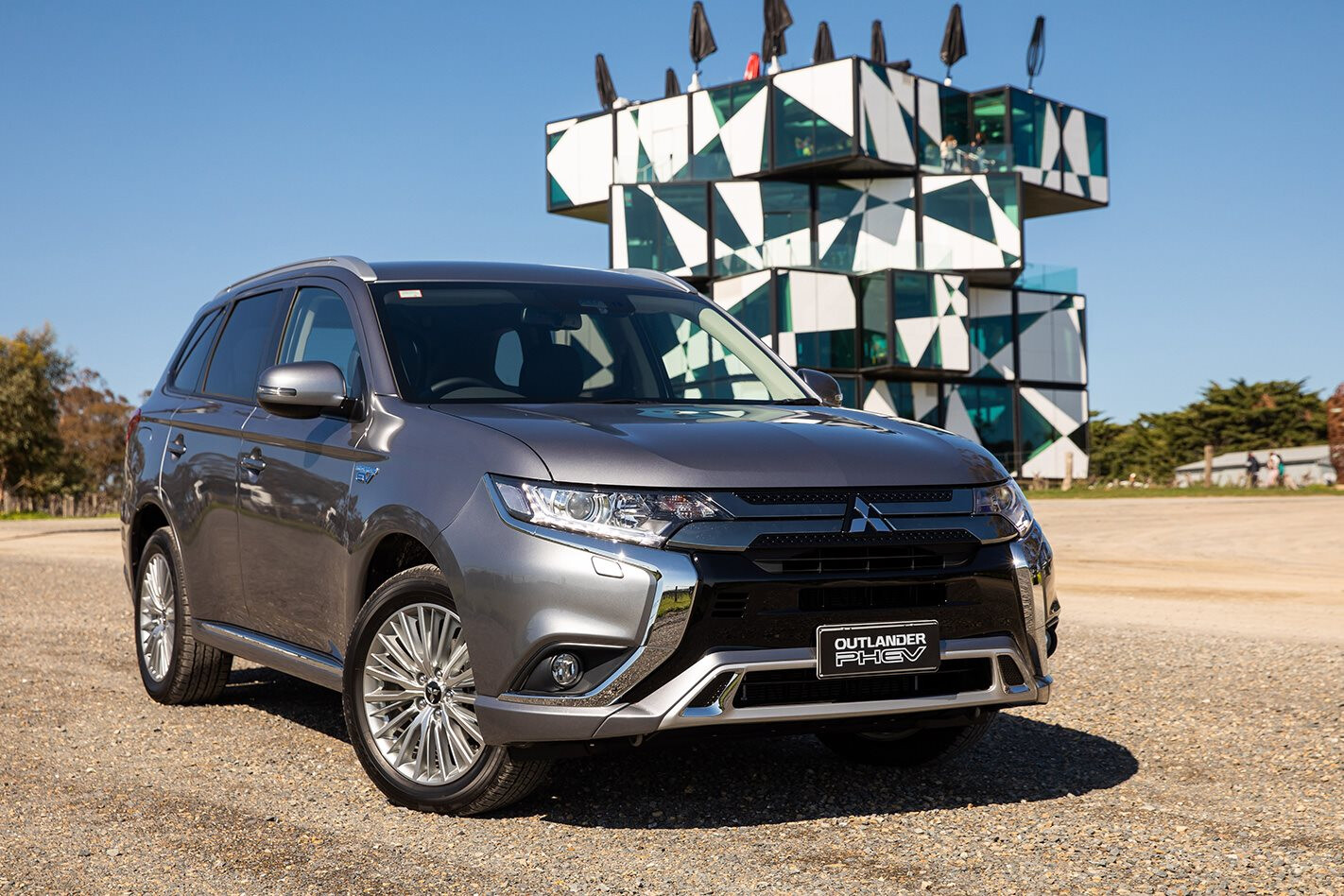 Mitsubishi was one of the first to bring a plug-in hybrid to market with its Outlander PHEV, and it remains the only real mainstream option in the three-row SUV class to boast a plug-in charging capability. For those that have a family to tote but who also want to insulate themselves from rising petrol costs, it could be the answer they’re looking for.

MORERead more about the Mitsubishi Outlander Lexus has a full stable of hybrid models, but none are quite as attention-grabbing as the seductively-styled LC 500h. It’s physically large, but the sleek bodywork and low-slung stance of Lexus’ petrol-electric luxury coupe draws even more eyeballs. As the most powerful hybrid in the Lexus portfolio, it’s able to zip to 100km/h in a brisk 5.0 seconds – a respectable effort for a car that weighs nearly two-tonnes.

MORERead more about the Lexus LC

The E-Class boasts impressive refinement in almost all of its variants, but none can match the E350e plug-in hybrid for smoothness and quietness when running on electric power. Like the BMW 330e, the electrically-enhanced E-Class sedan can travel for up to 30km on a single charge before its four-cylinder diesel engine needs to cut in, giving owners some measure of relief from the petrol price cycle.

Read more about the Mercedes-Benz E-Class 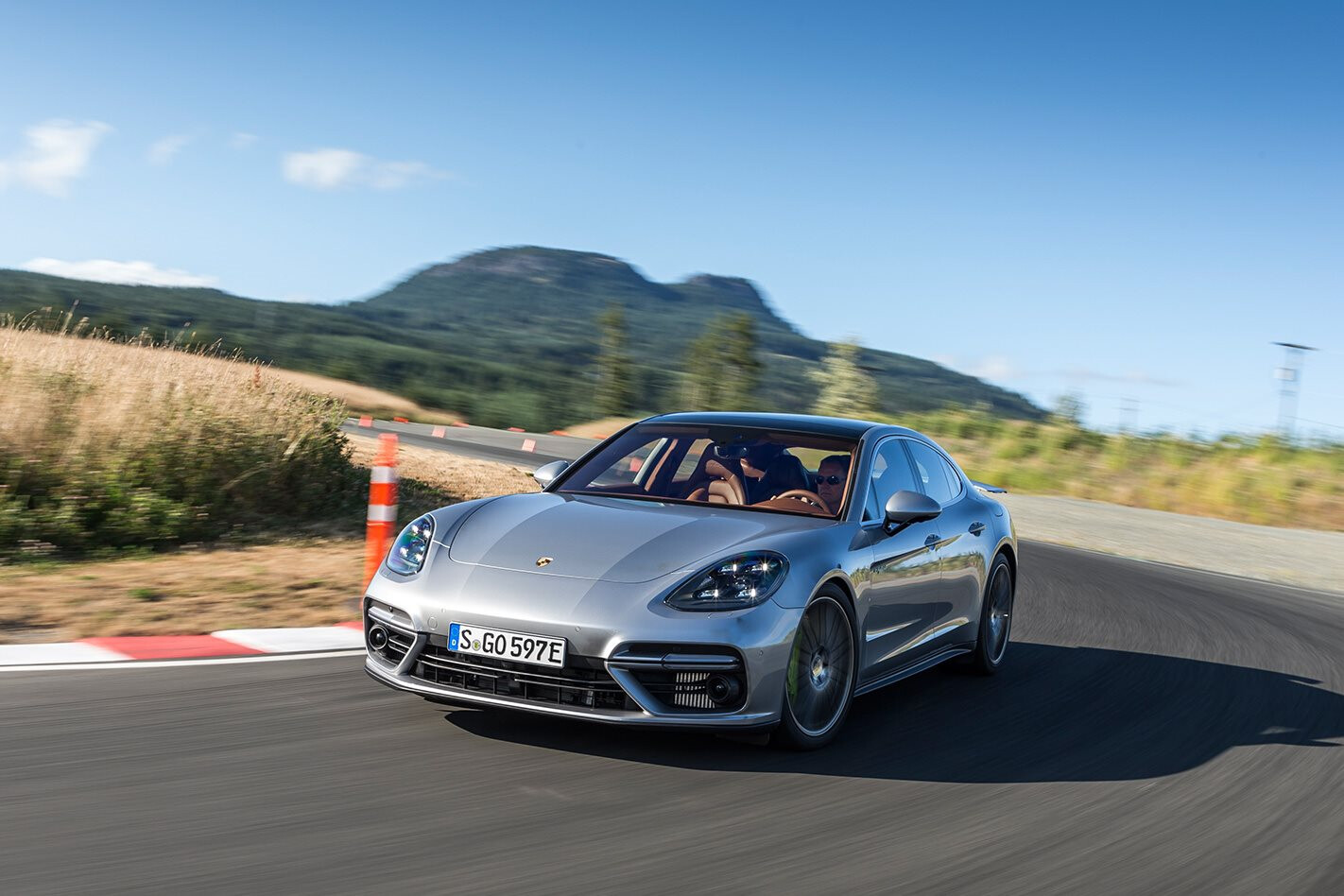 Hybrids aren’t just for saving fuel, and Porsche’s range-topping Panamera demonstrates just how petrol-electric powertrains can be employed to improve performance. Able to rocket to 100km/h in a supercar-like 3.4 seconds when its electric drive motors are working in concert with its 4.0-litre twin-turbo V8, the Panamera also boasts a plug-in charging capability and generous battery-only range. A true do-it-all device, but it certainly ain’t cheap!

MORERead more about the Porsche Panamera