The US road safety watchdog calls on smartphone makers to lock down devices while drivers are behind the wheel.

Mobile phones could soon have to switch to a special flight mode under a set of voluntary guidelines released overnight by the top US road safety authority.

The move should also step up the war between Apple and Android for control of your car’s dashboard as they rush to bring in features that blur the line between portable devices and in-car multimedia screens.

The appeal from the National Highway Traffic Safety Administration flags that smartphone makers will soon need to work even closer with car companies to ensure drivers aren’t distracted by the devices they pair up with their cars.

If they can’t, they may have to introduce a flight mode-like “driver mode” to lock drivers out of using anything but hands-free functions.

According to the NHTSA, technologies to detect whether a driver or passenger was using a device had been developed “but are currently being refined such that they can reliably detect whether the device user is the driver or a passenger and are not overly annoying and impractical”.

Until they do, it has asked device makers to allow users to manually activate the driver mode.

The changes were flagged in the second stage of NHTSA’s proposed voluntary guidelines it wants connected technology companies such as Apple and HTC to follow. The guidelines seek to ensure that even the most complex task performed behind the wheel takes less than a combined 12 seconds of eyes-off-the-road driving.

According to the NHTSA, anything that plugs into a car will need to be designed so they “reduce the potential for unsafe driver distraction by limiting the time a driver’s eyes are off the road, while at the same time preserving the full functionality of these devices when they are not used while driving”.

The NHTSA noted there are currently no safety guidelines for portable devices used in cars written into US law even though such a concept was announced to work with iPhones three years ago. 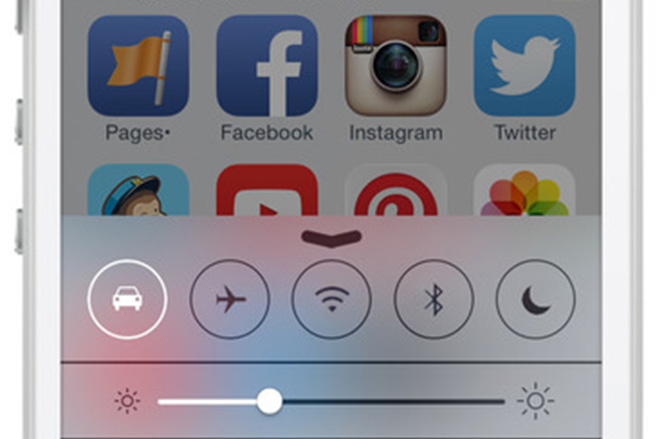 Car Mode could be selected manually like Airplane Mode or would work automatically when the phone was paired to the car via Bluetooth.

It would allow the phone to receive incoming hands-free calls and access Apple’s Siri map directions but disallow text messages until the driver was out of the car. It would even respond to texts messages by saying your “phone is currently in Car Mode”.

The idea was for Car Mode to actually be a part of the iPhones settings, rather than as a separate app, but while it was hoped it would come with the iOS 7 update this never eventuated.

The NHTSA document states that at any one time, more than half a million drivers on US roads were using handheld smartphones while driving, and were being distracted for an average of 23 seconds while they sent or received text messages – the worst behaviour flagged by the organisation.

The proposed guidelines are now open to feedback. For the next step, the NHTSA will go to the US government with a list of recommendations of how it thinks laws should change to protect distracted drivers from themselves.

TEXTING AND DRIVING IN AUSTRALIA

Australian road authorities claim up to 30 percent of car crashes on our roads are caused by driver distractions. Many have increased the penalties they hit drivers with if they’re caught using a device while behind the wheel.

A recent Queensland government study revealed as many as seven in every 10 drivers have admitted to using their phone while driving.

Victoria-based VicRoads has developed an Android-based app called Road Mode that can use a smartphone’s GPS connection to detect if its owner is in a car, lock it down by redirecting incoming calls to voicemail, and send an SMS message to callers alerting them that you’re driving. It switches off when the phone detects it has travelled slower than 20km/h for 10 minutes.