Toyota’s hybrid heroes: What’s the pick of the bunch?

The number of hybrid-engined cars filling Toyota’s showroom has swelled since the Prius arrived more than a decade ago.

Toyota has just sold its 10 millionth hybrid car, achieving a significant benchmark less than two years after announcing it had reached the eight million mark.

However, before you get excited, it’s been a long road to now. Toyota sold its first hybrid car, the Prius, in 1997. Toyota’s environmental poster car didn’t make it into Australian showrooms until 2001.

Over that time, the Prius family has grown to include three models: the compact Toyota Yaris-sized Prius C hatch, the small Prius five-door hatch, and the Prius V compact people-mover. It also has the larger Australian-made Camry Hybrid. Add in Toyota’s Corolla hybrid, and the cars made for its luxury arm – the CT200h small hatch; the small IS, mid-size ES, larger GS and limousine-like LS sedans; the small NX and the mid-size RX SUVs – and the Japanese carmaker has the most comprehensive hybrid line-up in Australia.

The tiny Prius C is the entry-level model in Toyota’s hybrid line-up, costing from $23,450, or about a $2500 premium over the most expensive, best-equipped Toyota Yaris. An i-Tech version – Toyota’s fancy name for adding satellite navigation and replacing the halogen headlights with LED ones – adds another $3000-odd to the price. 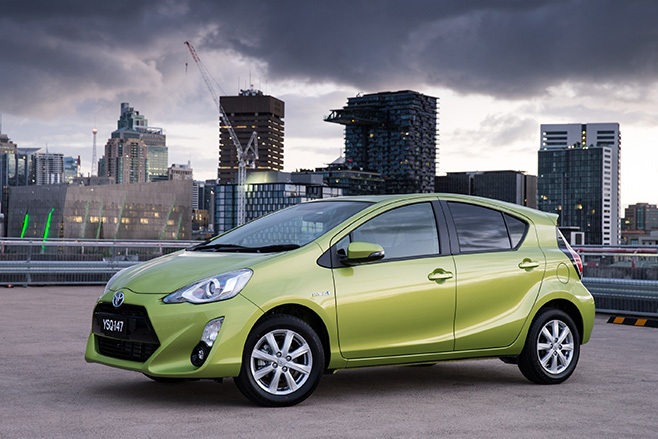 Official fuel use from the 1.5-litre petrol engine paired with an electric motor to help drive the front wheels is 3.9L/100km, while its carbon dioxide emissions – a sign of how green the car is – is rated at 90 grams per kilometre.

The Prius C is quite tight in the rear seats, and because the batteries are under the boot floor, the load space is very small compared with a normal hatchback. It’s rather dull to drive, and the plastics inside feel cheap and a little nasty when squared off against its high price.

We’re up to our third generation of Toyota’s environmental hero, and it has improved along the way. Priced from slightly less than $36,000, it costs about $3000 more than the much more conventional-looking Toyota Camry Hybrid. 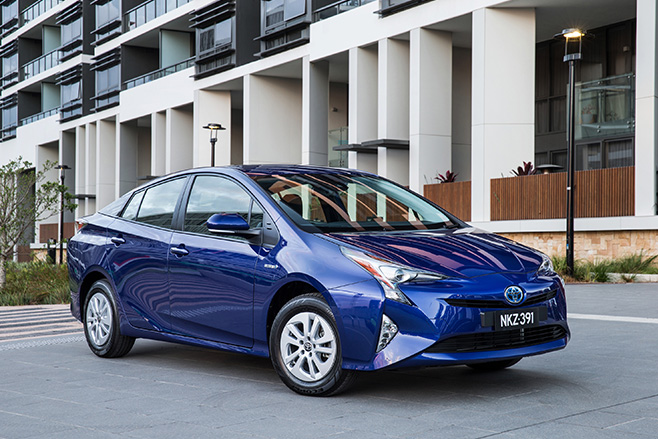 It’s the newest car in Toyota’s showroom, featuring what is known as the Toyota New Generation Architecture. That means it uses an all-new way of being built that optimises the Prius for hybridisation, as well as improving ride and handling. Unfortunately, the Prius’s new wrapping has become something of an acquired taste.

That said, the Prius now drives much better than it did before, but is still different to a conventional car. The big difference is how it brakes; to scrounge electricity it puts its electric motor in reverse to act like a generator, giving the brake pedal an odd, disconnected feeling. It’s good for rear-seat space, but the swept-back roofline eats into headroom. The boot is also a decent size; you can split-fold the rear seats to fit in larger parcels.

The Prius uses a 1.8-litre engine and an electric motor, and uses just 3.4L/100km and spits out 80g/km of carbon dioxide.

Need the convenience of a part-time people-mover but don’t like the big fuel bills? The $34,490 Prius V may be the answer. It uses a similar 1.8-litre engine and electric motor to the Prius, but fuel use jumps to an average 4.4 litres per 100 kilometres, and emissions to 101 grams per kilometre. 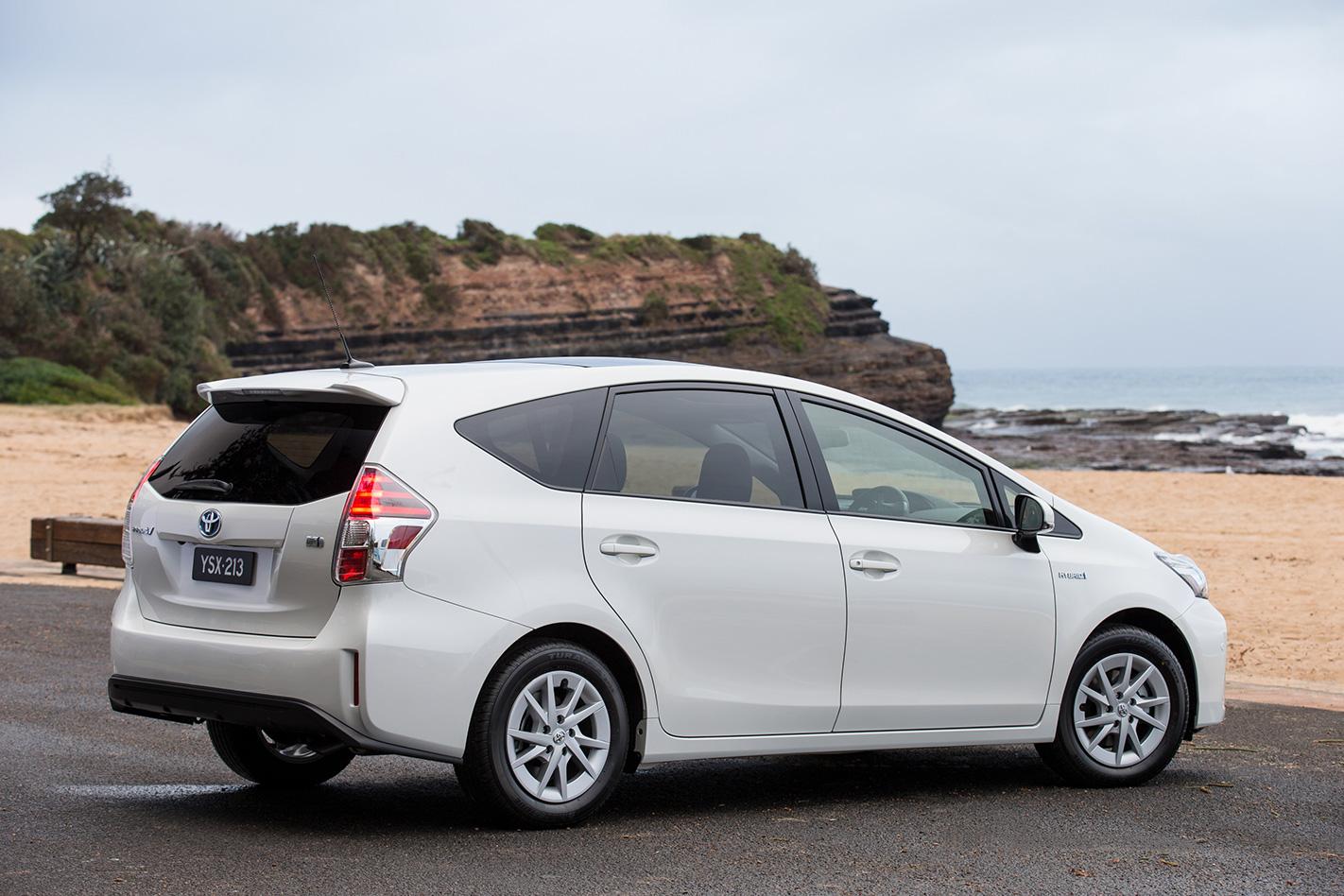 The rear-most seats are better suited to occasional use, and even then only with children filling them, and once the third-row seatbacks are upright there’s next to no luggage space.

As the Prius V is based on the old platform, it’s old-world tech apart from the frugal fuel use. Once again, there’s an almost $10,000 more expensive i-Tech version – wow – that includes satellite navigation and better LED headlights. The only bit of leather is on the steering wheel.

The Prius V suffers the same foibles as the smaller Prius C; it’s dull to drive, and the second- and third-row seats are rather cramped for space.

The Corolla was pipped last year for another crown as Australia’s best-selling car by an unexpected rival – the Toyota Hilux trade ute. 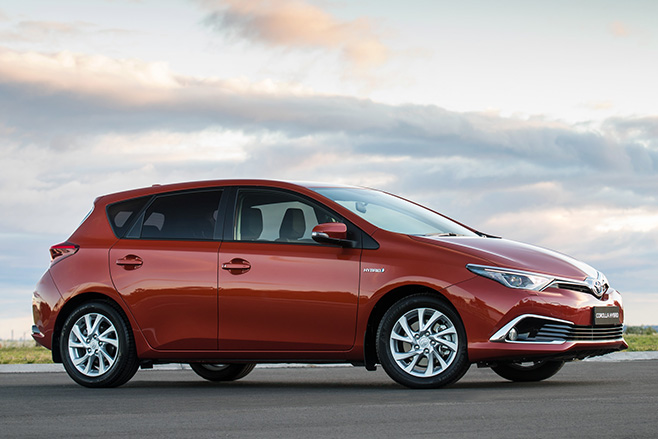 That aside, the Corolla was still Australia’s best-selling passenger car last year. It added a hybrid version costing $26,990 last year, making it more expensive than the much bigger Camry Hybrid (see below) and the second-most expensive Corolla on sale.

Inside, it’s surprisingly roomy and relatively well built if not very plastic. Under the bonnet is a 1.8-litre engine detuned for fuel efficiency, and paired with an electric motor to give the same level of performance as a conventionally engined version. Fuel use is as low as 4.1 litres per 100 kilometres; emissions fall under the magic 100 to sit at 96 grams of carbon dioxide per kilometre.

About the only sore point, apart from a raised boot floor that robs some luggage space, is the brake pedal. It is tuned to use the electric motor to scrape as much energy out of the braking process that it can and convert it to electricity that’s stored in the batteries. It can get so tricky that you never know exactly how much brake pedal pressure to apply.

Aussie-made until early October, the Camry Hybrid is the quiet achiever of the Toyota range. It features a 2.5-litre four-cylinder petrol engine working alongside an electric motor to give V6-like levels of performance with four-cylinder rivalling fuel economy. And it can carry five adults in comfort. 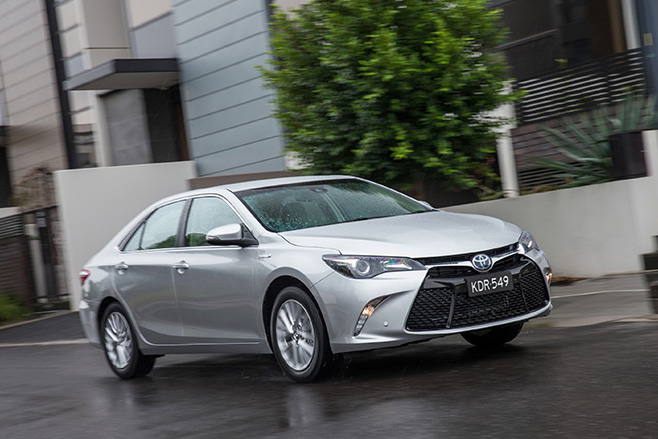 Priced from a pretty impressive $26,490 for the fleet-friendly Altise, the Camry Hybrid is something of a favourite with bulk buyers that have to tick the Aussie-made box, but want a low cost of ownership attached. Jumping up to the more richly equipped Atara S Hybrid adds $6000 to the cost. Fuel use is officially rated at 5.2 litres per 100 kilometres; emissions are 121 grams per 100 kilometres.

Disappointingly, this generation of the mid-size hybrid has taken half a step back from the previous one. The steering has become almost lifeless, the brake pedal has lost a lot of its feel so you don’t know how much to squash the pedal, and the ride – affected by the weight of the batteries hidden under the rear seat that it needs to carry – has softened.

The last Australian-made Toyota Camry is pretty dull inside, missing out on many of the changes – including more advanced driver safety aids – made to the car overseas but not introduced here in the name of capping costs.

Be warned, though: Toyota has flagged the fully imported Camry won’t be as cheap as it is now, suggesting if you’re interested in the hybrid, now’s the time to buy.

So what’s our top tip for the best hybrid Toyota? We’d lean towards the Prius, which is built on the new foundation that will spawn a whole generation of much-improved Toyota- and Lexus-badged cars. Unless you really want the extra tech, save some money and stick with the cheaper version, too; it will ride around the city better on its smaller wheels, so what you lose in convenience you make up for in comfort. If space is your priority, grab the Camry Hybrid while it’s still something of a bargain.