Slow, but satisfying. Except for Morley...

Personally, I have a few issues with the XR6 in a bang-for-your-bucks sense.

The first of these is the well documented driving position which, for somebody like me with a basketballer’s torso and a jockey’s legs, just does not work. And then, once I am in and sitting in what passes for a comfortable position, all that cheap plastic and old-fashioned trim starts to haunt me.

Not that the latter matters too much here at BFYB, but what does matter is that the Falcon just aint that fast. Oh, and there are no paddle-shifters for the tranny.

The motor is reasonably refined and it sounds pretty good, too, and, in  fairness, it isn’t too shabby across the quarter mile with a 14.7. But in the bendy stuff, it ceases to impress. The big guy feels pretty vague on turn-in and while you know for sure there are wheels under you (as suggested by the lack of sparks and scraping noises) you’re a better man than me if you can tell where the front pair is pointing at any given time. 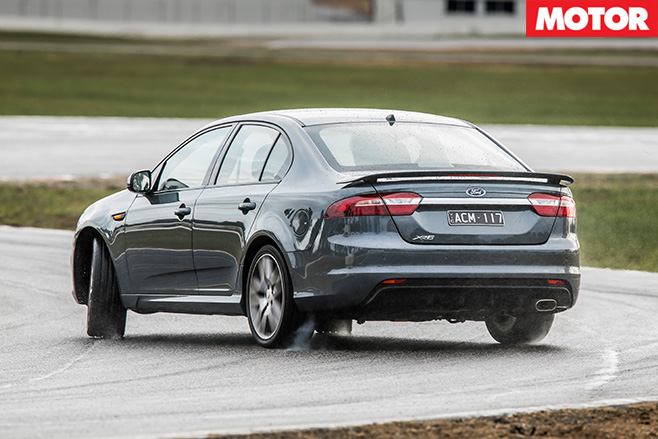 Corner speed further suffers by the whole car having a less-than-crisp feel to the way it tracks, making it extremely difficult to place at the entry to the corner. And if you do get it wrong at this point, it’s game over, because there’s not much chance of changing your mind, or your line, half way through a corner.

The proof of this is in the turn-five apex speed column, where the XR6 bobbed and weaved through at just 107km/h; down among the speeds recorded by the warm hatches. The slower turn-nine saw the XR6 punch through a bit closer to the pack, but still nowhere near the podium.

Another large part of the Falc’s problems lies in its brakes. Frankly, they’re rubbish in this context. There’s next to no feel and the pedal needs an almighty push to get things happening. 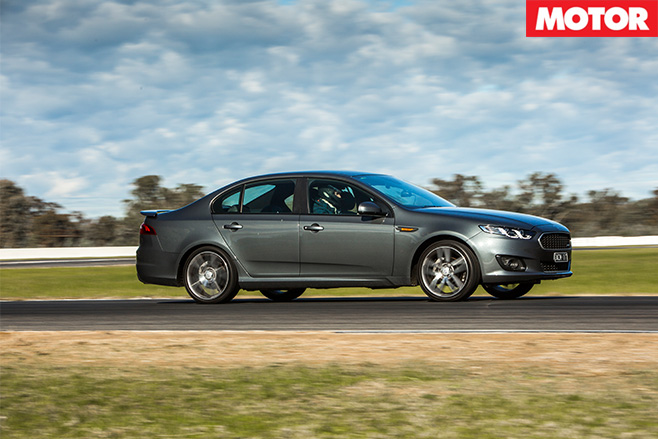 Even then, you’re left with no feedback save for the yammering of the ABS kicking in at which point it’s way too late and , oops, there goes another apex begging. On the road, this level of braking hardware might be okay (although experience suggests not) but at a place like Winton, it’s underdone to the point of why-bother.

Okay, so with its muscled-up big-bro, the XR6T, in the same category mix, this was never going to be an easy mission for the XR6. And while it makes for an admirable road car, when push comes to Bang, the atmo Falcon emerges not as a high-performance five-seater, but rather as a very comfortable way to go not very fast.

Campbell 8th – “Feels confused to find itself on a track, but up for a play. Where’s the nearest Hertz?”

Newman 7th – “Love this thing. Not a track car but so balanced.”

Spinks 11th – “The lesser XR in theory but not so much in practice.”

Luffy 13th – “For a big car it does well around the circuit's tight confines, but it lacks a bit of steering feel through the twistys. Ergonomically (just like the XR6T) you feel like you sit on the car and not in the car. So you don't feel a part of the actual car, which detracts from the whole driving experience. It's also too tall in its gearing for this circuit.”