About 80 million years ago the Ebor Volcano erupted and created some of the best fourwheel driving Australia has to offer: the mountain region behind Coffs Harbour.

Here the mountains come closer to the sea than anywhere else on the east coast, and the terrain constantly changes from easy plateaus to sections of extreme four-wheel driving that can push drivers and their rigs to the limits.

From pristine rainforest pockets and lantana-infested areas to heavily timbered oldgrowth sections with some of the oldest and hardest timber in New South Wales, there are many features that make the Coffs Coast’s trails special. With ocean views, you can pick your way through huge gums along the ridges, while remaining close to the city centre’s creature comforts.

River conditions can change in minutes with heavy rainfall upstream.

There is no need to have a fully specced-out comp truck to enjoy the Coffs hinterland, as there are enough tracks, from easy to mild, for any explorer.

But care still needs to be taken in the wetter months or even when storms are about, as track conditions can turn nasty, fast. As with any trip or adventure, preparation and maintenance need to be prioritised, especially because phone and UHF radio signals in the region can be sketchy.

There are many 4x4 workshops and accessories stores located on the Coffs Coast, but it is still best to head to the hills with a plan. Get some local knowledge at a friendly 4x4 shop and grab a handful of maps for an overview of the area. As on any trip, you will need to carry the basic recovery items; a UHF radio is handy, plus correct clothing for the conditions.

Some tracks in the rainforests are damp almost all year.

Several tracks are worth mentioning, but, again, you will need to seek local advice, as conditions do change constantly. The Rover Trail hugs the coast from Coffs north for several kilometres to give you coastal views towards the Solitary Islands. Another great one to tackle is Morbid Trail, which heads upwards towards Mount Coramba, the highest point on the Coffs Coast, giving you views across rugged terrain as well as ocean views.

Situated 6km from the heart of Coffs, this mountain is 700m above sea level, and with track names such as Rocky, Commando, Dump and Spur, you will need to come prepared. Or you could just head to Friday Creek, where you can spend hours relaxing in crystal-clear water filtered down from the hinterland – in summer the water is very refreshing. 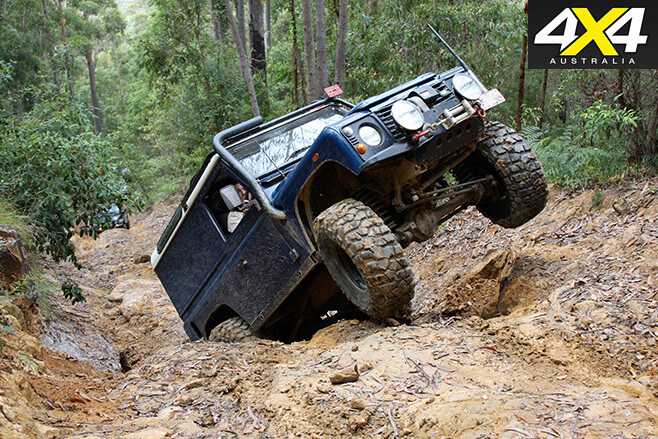 The wilder tracks on the Coffs Coast demand respect. These tracks can break even the hardest and meanest 4x4s and drivers. But if the tracks still aren’t enough fun for you, there are activities such as sky diving, white water rafting on the Nymboida River, chasing elusive marlin off the coast, mountain bike riding in the local forests, scuba diving around the Solitary Islands, whale watching, on-road and off-road motorcycling, and even camel riding on the beach.

CAMPING AND ACTIVITIES
From bush camps with river views to beach frontage sites where you can lose yourself for days, the region has some fantastic caravan parks for those who like to be spoilt with pools, shopping centres and local attractions.

Who needs Netflix when you have all this to explore?

Nymboida, 60km west of Coffs, has some of the best river frontage camping spots you can find. Camp locations have picturesque views beside the mighty Nymboida River, where rafting companies begin trips downstream to tackle grade 4-5 rapids. The camp spots, which include grassed areas, also grant travellers access to pit toilets.

To camp out here, though, you will need to be selfsufficient, as there are no shops to duck back to and there is no phone reception. Nymboida is true gorge country, and although it’s only about two hours from the coast, travellers to the region may not see anyone else for days.

Keep an eye on weather conditions here, too, as storms in other gorge areas may cause the river to rise quickly.

The Coffs Coast region also includes the rainforest escarpments of Dorrigo, the golden beaches of Hungry Head and Urunga in the south, the Red Rock in the north and the blue waters of the Solitary Islands Marine Park. It boasts a temperate climate all year and has many activities and attractions. It’s also one of those places where the Great Dividing Range meets the sea, allowing for a host of national parks and reserves: there are, in fact, 11 national parks, 14 nature reserves, 84,000 hectares of World Heritage Area, several Aboriginal sites and a regional park, 37 state forests, 90km of beach, and 71,100 hectares of Solitary Islands Marine Park.

You can also leave the bush behind for a while to explore other wonders of the Coffs Coast if the weather turns ugly or the missus wants to shop. From jetty jumping and cycling around town to eating out at first-class restaurants, there are many options.

The City of Coffs Harbour itself has several major shopping centres, fuel stops and mechanical workshops.

To slow down, visit Dorrigo, where there are several walks through World Heritage national parks. Or you can spend time angling for a variety of species of fish in one of many local rivers. 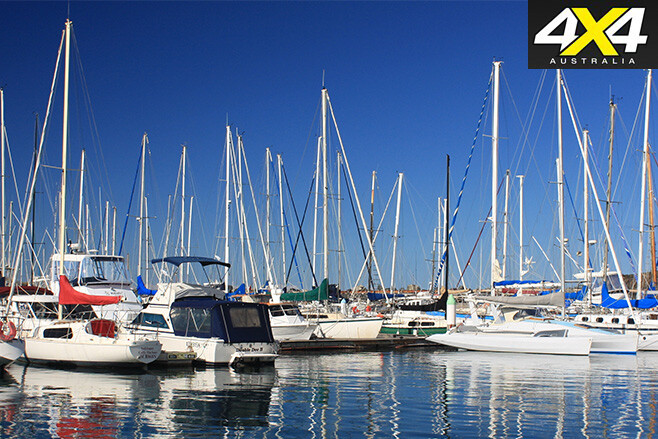 The hub of the Coffs Coast revolves around the historic Coffs Harbour jetty. The jetty juts out several hundred metres past beaches and the Coffs marina, where an evening stroll should definitely be on the to-do list when visiting the area.

For history buffs, there is a host of places to visit around the Coffs Coast, including the WWII gun bunkers, the old Glenreagh to Dorrigo railway line, which has a handful of sidings still standing, and about 200 registered gold mines that still can be found today.

There are several old gold mining villages, and don’t forgot the old loggers’ stumps that still litter the bush – you can see in the stumps the plank cutouts where old-timers stood with axes and saws up to 15 feet above the ground. The old mill at Cascade NP in the hinterland is always a hit with the kids, too, and for those who don’t scare too easily, the heritage listed Coffs Harbour Cemetery is worth a look. If you love the ocean, you can camp so close to the water that you’ll breathe salt-sea air as you sleep. Situated just 40 minutes north of Coffs in the Yuraygir NP, Pebbly Beach has been earmarked as one of the top campsites on the eastern seaboard of NSW.

Timing is paramount here, as you cross a tidal creek to access the pristine campgrounds after a drive north along the coastline. Facilities include basic pit toilets, so again being selfsufficient is a must for those on long stays.

Camping on the Coffs Coast is suitable all year round, but be prepared for cool nights in winter and warm summer days. Cool nights mean fires are possible at some locations, while the hot summer days mean swimming in crystal-clear waterways, or riding the waves along the coastline. For those who need extra camping gear or just plain forgot something, there are several large camping stores in the Coffs area. 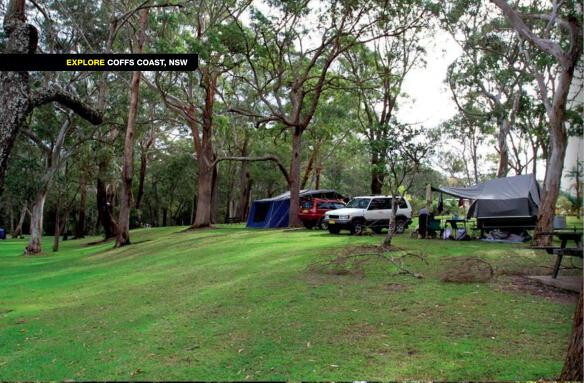 Perhaps the best thing about these iconic camping locations is they are available to those with tents, swags or camper trailers. National Parks and Wildlife Service (NPWS) looks after several camping locations here, and with the minimum fee paid, there are benefits such as the pit toilets, clean sites and even firewood.

WHERE
Coffs Harbour is found midway between Sydney and Brisbane, allowing easy access by road, rail or air. It’s an easy day’s drive from either Sydney (550 km) or Brisbane (400km).

FACILITIES
Available are standard National Parks and Wildlife Service (NPWS) facilities such as pit toilets and fire pits, which are clearly visible at most campsites. Camping is free in any state forest but there are no facilities. Caravan parks offer full amenities.

TRIP STANDARD
Your level of experience and how your truck is set up should determine the tracks you tackle. Tracks range from extreme to easy. Some tracks have stunning coastal views while others traverse ridges and enter gullies where there are pristine waterways.

PERMITS
No permits are required to drive on 4x4-friendly beaches on the Coffs Coast or in the state forest area surrounding Coffs Harbour. Standard fees apply to designated NPWS camping areas.