As the Drive 4 Life convoy pulled away from Parramatta, 10 brand-new Isuzu Ute Australia-supplied vehicles were abuzz with early-morning anticipation of the journey ahead.

In addition to D4L’s annual fundraising tours, the not-for-profit team also takes people with disabilities and their carers out bush for 4x4 fun that they might not otherwise have. These adventures, fondly dubbed the ‘Wheelies’ trips, aim to support the great work disabilities service provider Northcott does.

This year, a lot of effort went in to getting the excursion underway. But as the convoy departed over the Great Dividing Range and headed west for red dirt, sheep stations and campfires, it was obvious that the good times ahead would be well worth the work. The first couple of days of driving would cover the 800-odd kilometres through the Central West and deep into the upper reaches of the Darling River country. From there, the plan was to follow that great river south towards its merger with the Murray, stopping along the way to experience some true Australian outback lifestyle. That was the plan, anyway, and things started off well.

After an easy day on the road, the Wheelies crew arrived at the small town of Nyngan, about 160km north-west of Dubbo, on the edge of the outback. Here, the local IGA supermarket owner, Rashid, treated everyone to a barbecue dinner. IGA Supermarkets are a long-time supporter of D4L. Nyngan was to be the last stop before we left the blacktop and headed for the scrub-lined sand and dirt tracks of the Darling River around Louth, but the weather, it seems, had other plans. That night, heavy rain hammered the hotel roof, punctuated by the wall-rattling rumble and crash of nearby lightning strikes.

A weary-eyed look at the Bureau of Meteorology (BOM) website the next morning revealed the magnitude of the weather that had started to roll across New South Wales.

A quick call to Trilby Station – the planned night-two destination – confirmed that while the roads were currently still open, they were expecting more rain, which would probably trap anyone in the area for some time. The boys made the only decision they could; to stay on the blacktop and head for Broken Hill. It was good call, too. Within a few hours of the intended arrival time into Trilby, the heavens opened and shut the whole district down for almost a week. The rain wasn’t the first for the season, either, and the long road out through Cobar and Wilcannia cut through a sea of greenery.

For those who had seen this country in its regular arid guise, it was quite jaw-dropping to see the transformation.

It’s easy to see how pioneers who showed up in wet years could have been fooled into thinking they had found an untapped paradise. The ubiquitous feral goats loved it, too – thousands of them lined the road west of Cobar, and they all looked fat, healthy and content. 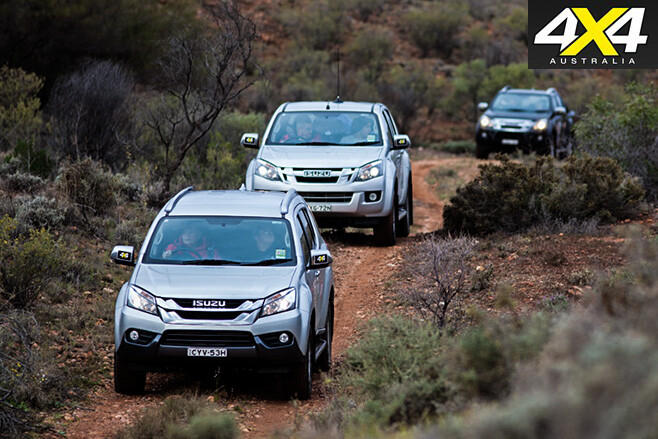 Day-three was cold, wet and windy, but the crew found morning refuge in the dining room of the Astra Hotel in the heart of Broken Hill, where a long brekky was served. That gave the Drive 4 Life team a bit of time to reroute and find some new activities, destinations and, of course, new accommodation for the rest of the week.

There are a few things that are a must when you visit Broken Hill; the art around town is one of them. So after the luxury of the Astra Hotel dining room, the intrepid troupe made for a few of the many art galleries that can be found around town.

Carers, clients and drivers enjoyed a wistful few hours wandering among the paintings, drawings and sculptures presented by the Hill’s thriving artistic community. Works by such luminaries as Pro Hart, Clifton Pugh and Jack Absalom, as well as a myriad of other talented Australians, have made this outback mining town one of the country’s must-see artistic hubs.

Likewise, you can’t travel to Broken Hill without a side trip to the iconic ‘Outback Hollywood’ of Silverton. So after a lunch put on by Dennis, Julie and Johnathon Oliver, proprietors of Broken Hill’s new ARB 4x4 store, the Isuzu convoy headed for this famous little town. 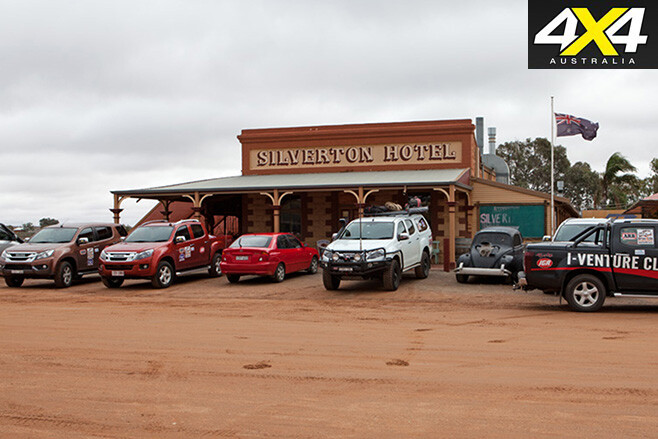 With a few movie buffs in the group, a lot of time was spent perusing the photos and memorabilia adorning the walls of the Silverton Hotel. As you would expect, the Mad Max II memorabilia got most of the attention.

But it was some impromptu 4x4 action off the back of Mundi Mundi Lookout that really got the adrenalin pumping, before a side trip at dusk to the sculptures of Living Desert rounded out the day’s activities. 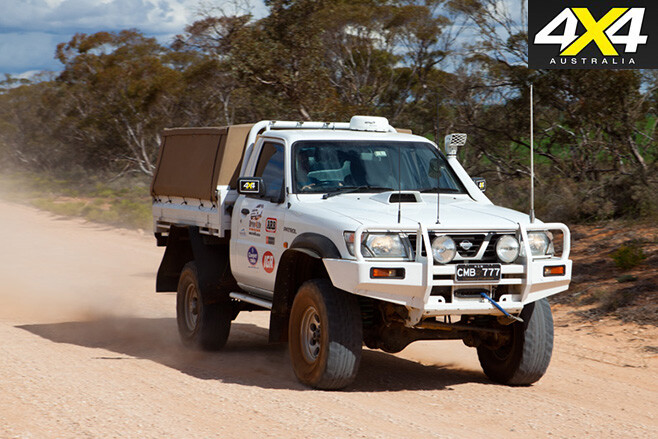 Since the idea of seriously heading off the blacktop had become an all-but-forgotten dream, the next morning the convoy set out south for lunch at the confluence of the Darling and Murray rivers at Wentworth.

The sun was poking its bright head out, so the troupe enjoyed a relaxing few hours roaming the park and grounds around Lock 11 before heading into Mildura for an amazing campfire-inspired meal put on by cooks Janine and Kelly. A highlight the following morning was watching the sun rise over the river town.

The D4L guys had arranged for the group to spend a few hours on the mighty Murray River, onboard local icon, the ‘Melbourne’. The Melbourne is a genuine relic of the days when paddle steamers plied the river for almost its entire length. Rescued from oblivion back in the 60s, this piece of Murray history was resurrected and returned almost to its original condition – original steam engine and all – so travellers can experience a bit of history. It was no doubt a winner in the eyes of this group of explorers too; the fun they were having was incredibly infectious. 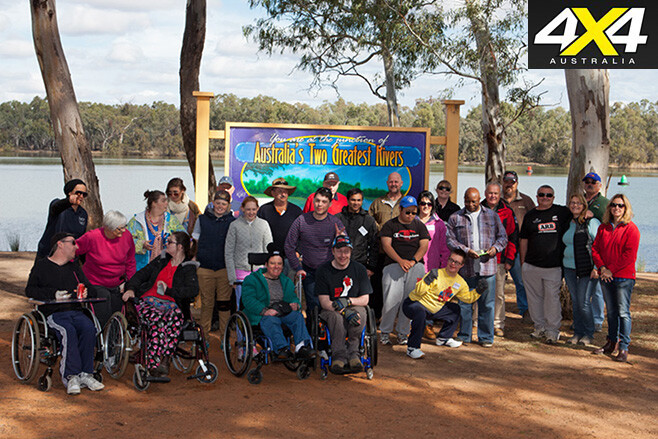 The group consisted of people with varying levels of physical immobility, as well as a few with intellectual impairments. Having the freedom to travel to places like this is often taken for granted, but not by this group – some of the crew that had started out quiet were now showing their true spark.

Of course, it would have been good to take these guys off the beaten track to introduce them to sheep stations, camp fires and outback personalities, but that would have just been a different backdrop for what was really important – having a great time together away from the daily routine. Nevertheless, with the week and the trip drawing to a close, and after a couple of bright sunny days, it was time get the Isuzu’s a bit dusty. They didn’t want to take these hardy souls back home without at least trying to give them a taste of the beautiful Australian outback bush that they’d come so far to see. With Mungo National Park still closed, they took off south-west to Murray Sunset National Park.

After a stop in Red Cliffs to have a look at the Big Lizzie tractor, they finally got some dirt under their Coopers heading west along the boundary of the park. They followed the fence line for about 30km before turning south to head deep into the interior, where the almost pristine bush to the left contrasted with the acres of new-growth wheat on the other side of the park boundary to the right. After a few stops to have a look around and a stop for lunch deep in the bush, it was back to the blacktop. 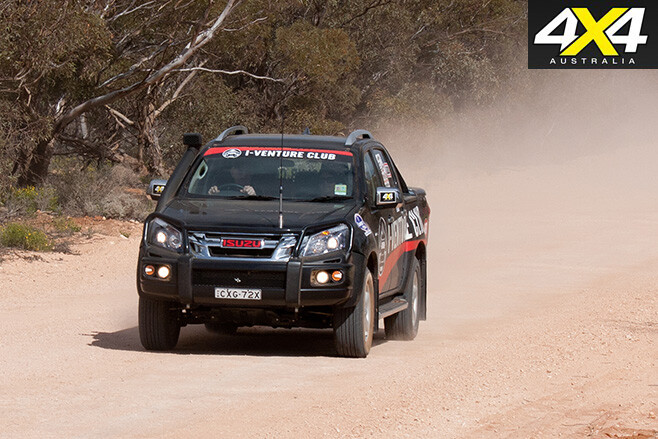 Regardless, the trip had been a huge success. It had been planned for folks that might otherwise find it difficult to go bush, but also to bring together people from various backgrounds and situations.

There’s no doubt that the latter of these two goals was achieved. At the start of the trip, some of the crew barely knew each other – on the drive back in to Parramatta, the cars were filled with genuine mates. The original plan to go bush had become immaterial. Drive 4 Life thanks its ongoing supporters at ARB 4x4 Accesories, Cooper Tires, and IGA Supermarkets for making trips like this happen, and adds a special thanks to Isuzu Ute Australia for suppliying the D-Max utes and MU-X wagons to get everyone to the outback and back in saftey and comfort on this trip of a lifetime.

If you’ve been around the four-wheel drive scene for a while, you might have heard about the guys at Drive 4 Life. They are well known for running, week-long, multi-group trips once or twice a year to places like the Victorian High Country to raise money for people with disabilities.

In fact, over the past 10 years, the volunteers at Drive 4 Life have poured more than $750,000 into not-for-profit organisation Northcott to help fund the work this generous organisation does.

As great as that is, these guys don’t just run events to raise money for Northcott. From time to time they also take a few Northcott clients out into the Never Never. These trips, fondly dubbed the “Wheelies” trips, are always very successful, and the 2015 trip was no exception.