WE HAD stopped under the shade of what seemed to be the only tree around.

The country stretched away to the horizon all around us, but the normal landscape of rolling dry saltbush was broken by a stretch of water... and it wasn’t a mirage.

The Cobham Lakes straddle the road north of Packsaddle along the Silver City Highway and, from what we have been told, the easternmost one is salt and the one off the west side of the road is fresh. An historic grave of a woman who died there back in 1886 can be found on the north side of the lake, but we couldn’t find a single sign of the first hotel – by all accounts opened in 1882 – built in the Corner Country.

Earlier that morning we had left Broken Hill, the gateway to the Corner Country of NSW and the foundation stone of the western part of the state. The town once sat on the biggest and richest silver/lead/zinc deposit in the world; when it was first discovered in the 1870s, it made the finders very rich men. It became the absolute bedrock of what is now the gargantuan BHP Billiton and, while there are far fewer miners working underground these days and BHP has moved on to bigger things, the town has become a focus for tourism and outback art.

We headed north up the Silver City Highway that today is more bitumen than gravel, although there are still some lengthy sections of unpaved road. We passed the ruins of old hotels at Stephens Creek and Yanco Glen, before coming to the site of the old township of Euriowie. Back in the 1880s, tin was found in the nearby Barrier Ranges, and at its peak the town had a population of 700.

Today, little remains of the town, but the old cemetery can be found on the north-eastern side of Euriowie Creek, and with permission from the local land owner there are some hidden ruins to discover in the nearby hills. Also scattered around this area and in the gorges are some impressive Aboriginal rock engraving sites. 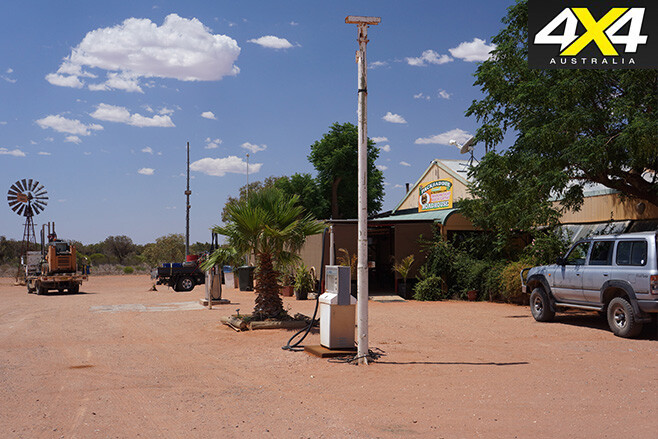 We stopped in at the Packsaddle Roadhouse, but it was too early for a cold beer so we contented ourselves with a softy and pushed on. It was then that we stopped under the shade of the lone tree at Cobham Lakes, which would make a pleasant overnight stop, before the highway called again.

The next stop north was Milparinka, which has seen the doors of the historic Albert Hotel opened again. So we decided to call it quits for the day and set up camp just a stone’s throw from the notable and pleasant drinking hole. In fact, while washing down the dust from our travels, the menu looked so good we decided any cooking was going out the window and we were having a meal there as well. Who could argue with that?

The local historical society has done a lot of work at Milparinka, which back in the 1880s was the centre of the surrounding goldfields. They have refurbished the last two grand, old stone buildings, set up information signs and displays, as well as established a fine little museum, which is worth a wander through. Sadly, the Albert Goldfields aren’t accessible, as they are being worked and have been closed off for public safety – that’s the excuse anyway. 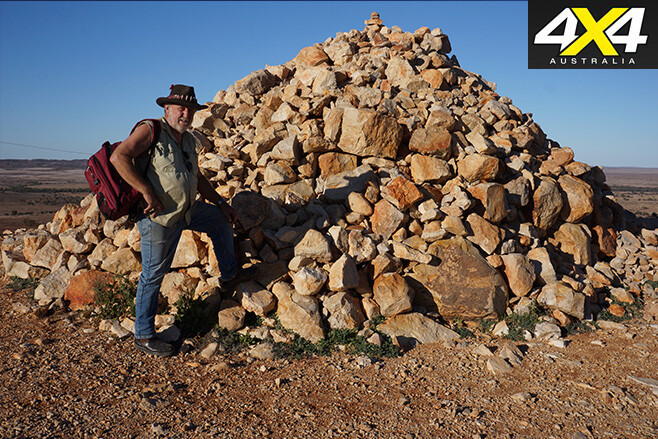 Just 16km north-west of Milparinka is Depot Glen, where Charles Sturt and his men were trapped for more than six months in the drought of 1844. James Poole, Sturt’s 2IC, died here and his grave can still be seen, while Mt Poole is a few kilometres away across the gibber-strewn plain. Here on top of its lowly, rocky crest, Sturt had his men (my great-great grandfather among them) build a rock cairn as a memorial to Poole, but, more pragmatically, it was used as a beacon to help him navigate in this near-featureless country.

Back on the main road it’s just a short hop to Tibooburra, which is the biggest town on this loop through the Corner Country. It’s easy to see why this place was originally known during the goldrush era as ‘The Granites’, as the little hamlet is surrounded by piles of rounded, weather-smoothed rocks.

With two pubs and a couple of servos and general stores, it’s an oasis in a dry land. Check out the model of what Sturt’s 1844 expedition looked like in the local national parks office, and don’t forget to admire the paintings on the walls of the Family Hotel, some of which were done by acclaimed artist, the late Clifton Pugh. 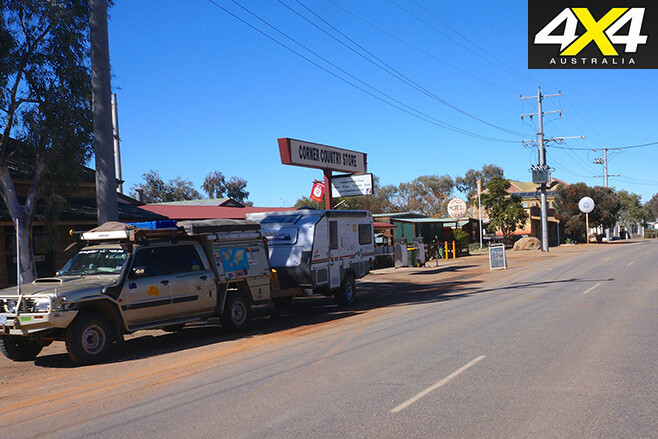 The story goes he got stuck in the pub because of rain closing the roads, and when he got bored he started painting the walls. Mind you, the portraits don’t have much clothing on, and it turns out they were the publican’s daughters!

Tibooburra is essentially surrounded by the Sturt National Park, and just outside town is Golden Gully, where you’ll find a heap of transplanted mining equipment from when gold was being dug and when water was scarcer than the much sought-after mineral.

Nearby is Dead Horse Gully campground, while a couple of tourist drives through the park take you to old Mt Wood Homestead and Jump-Up country, both of which are worth doing. However, for our little party, it was enough to have a quick look around town, get some fuel and head to the Sturt National Park, some 85km north-west of the town and just south of Fort Grey Homestead. Not far from the homestead is a small camping area close to where Charles Sturt set up another camp in July 1845. His party stayed here for four months while Sturt led a small group of men north as far as Cooper Creek and the eastern edge of the Simpson Desert.

For us, though, Fort Grey was just a short drive to Cameron Corner, the meeting point of the borders of NSW, SA and Queensland. Surveyor JB Cameron spent two years from 1880 to 1882 marking the Queensland/NSW border, and he placed a post here in September 1880 – so I guess it’s fair enough for it to be named after him.

The Wild Dog Fence that follows the borders came a few years later and is still in use today. It attempts to keep dingoes on the north and west side of the netting, so that farmers can run sheep on the south side, but it’s only partially successful at that. 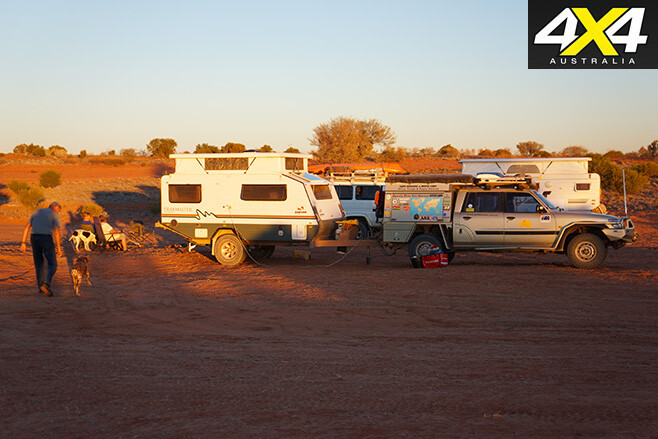 For most travellers, Cameron Corner is well-known for its store and hotel, which opened in 1989 and has been supplying cold beer, a hot meal and accommodation and camping since. We stopped for the evening, set up camp and wandered over for a coldie or two, but this time around resisted a meal in the friendly establishment.

The next day we headed back towards Tibooburra then took the Gum Vale Gorge road south-west from town, which is the back way to Milparinka. There’s an opportunity along the way to check out the old mining equipment around the Warratta Mine, before pushing on and passing Mt Sturt Homestead and arriving back at the small hamlet.

There were a few kangaroos around in the early morning, but as the sun climbed higher they retreated to the shade. At one spot further south, the ’roos in their quest for water had dug out a big depression in the sand; two were even scraping away at the soak as we came along. They must have been thirsty, as they didn’t bound away when we neared. 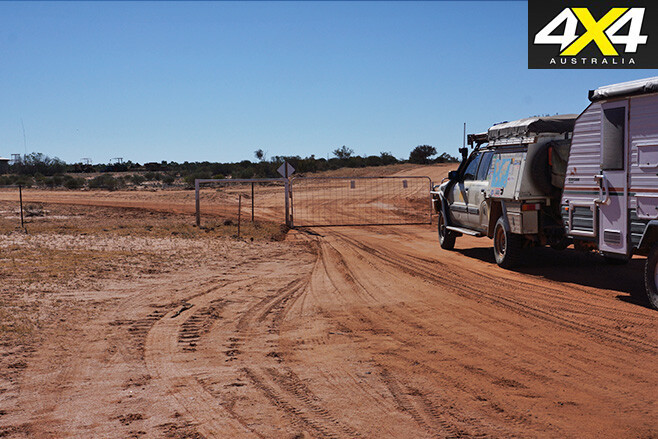 Pushing south and staying away from the highway is a pleasant run, only spoilt by the sheer number of gates you must pass through. In fact, as you head past Mt Shannon, Pincally, Pimpara Lake, Yelka and The Veldt homesteads, there must be more gates along this back road than anywhere else in Australia.

As we continued along the route, we managed to get confused at a number of track junctions that pass by lonely homesteads including Teilta, McDougalls Well, Corona and Willangee. Quite a number of these stations and others in the surrounding area offer accommodation and camping, as well as tours and self-drive 4WD tracks to enjoy.

There couldn’t be a better way to get an understanding of the country and the people who live and work out here than by staying at one or more of these properties. And you’ll get to see some great wildlife, especially the many birds that call this semi-desert region home. 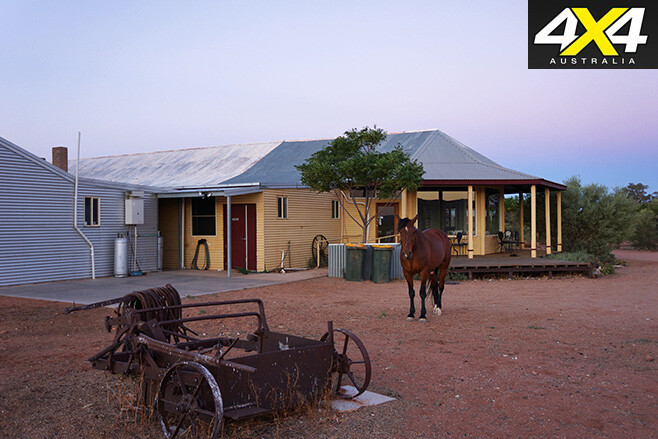 We soon pulled into the well-known Eldee Station that nestles beside the western flank of the Barrier Ranges, where Naomi and Steve Schmidt made us feel welcome. Here you can enjoy some great 4WD tracks, take a photography course, or enjoy a guided walk.

When you come back to the homestead you can cool off in the pool and spa. It’s a well set up station stay.

The next morning we headed across the Mundi Mundi Plains and climbed the hill that overlooks them. We soon came to Silverton, where among the scattered ruins of this once vibrant silver mining town you’ll find a few first-class outback art galleries, as well as the Mad Max Museum (because the films of the same name were shot around here). You can also visit the old Silverton Gaol and the Daydream Mine.

However, as we had popped into every outback pub we’d passed along the way, we rolled to a halt at the Silverton Hotel. With Broken Hill just down the road, our trip around Corner Country was drawing to a close. But like so many times before, we’ll be back – I bet you won’t be able to just visit it once, either.

BROKEN Hill, the gateway to Corner Country, is 1150km west of Sydney, 840km north-west of Melbourne, and 520km north-east of Adelaide. It can supply everything a traveller needs, and it demands more than a day to visit all of its attractions.
For more: www.brokenhillaustralia.com.au.

The best place to start your planning for a trip out to the Corner Country is at: www.outbacknsw.com.au. Here you’ll find all the sheep and cattle stations in the area that offer camping and accommodation. The best time to go is winter and spring... so hop to it!
Eldee Station: www.eldeestation.com.
Silverton: www.silverton.org.au.