This feature was originally published in MOTOR’s August 2012 issue

Yep, Ford’s decision to ditch the V8 was a real thigh-slapper. Weird thing is, it was only Ford itself that couldn’t see the folly of dumping the very thing that set it apart from imported cars and gave it some street cred among the people who were most likely to grow up and buy a Ford of their own sometime down the track. 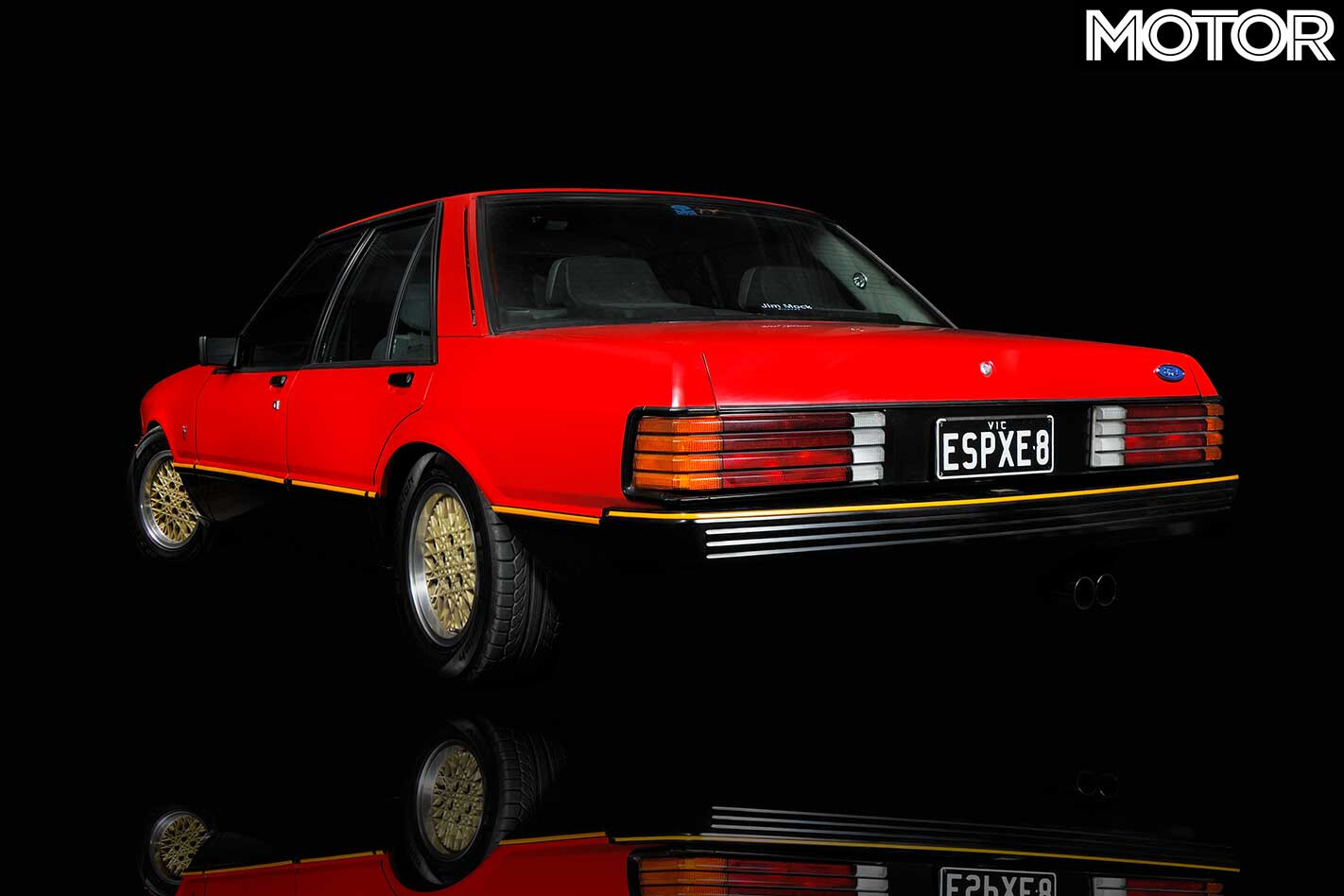 This short-sightedness had several outcomes. First, it handed Holden  (and the Commodore) the yoof market on a double-overhead-chrome platter. And the proof of that is in every TAFE car-park in the country. Yep, where young blokes interested in cars gather, there will be a plague of Commodores and often not a single Henry to be seen.

Secondly, the axing of the Ford V8 put the cause of fuel-injection back several years. See, the replacement (Ford’s word, not ours) for the V8 was an injected version of the 4.1-litre pushrod six. But the efi six-pot just never cut it, leading to a suspicion that injection wasn’t all that it had been cracked up to be.

Of course, it wasn’t the fault of fuel-injection technology, because when it comes to 4.1 litres against 5.8, Blind Freddy could see it was like taking a knife to a gun-fight.

The third effect of all this boardroom buffoonery was to create a couple of Fords that have attained collectible status; cars which, had the V8 continued on its merry way, may have been forgotten. And the XE ESP is the poster-child for that phenomenon.

But let’s not defame an Aussie V8 here; the ESP was a decent bit of kit in its day and worth finding now (especially if you have access to a pair of rose-tinted driving goggles). It’s just that its major claim to fame is that it represents the end of the Falcon V8 era (at the time, anyway) rather than any other-worldly powers of its own.

Selling it short? A little. Let me explain. The XE Falcon was not, as Falcons go, a landmark model. But for one thing. Although it was based heavily on the new-for-79 XD, the ace up the XE’s sleeve was all behind the rear seat.

Yep, that leaf-spring rear suspension that had served big Fords so, er, suspendily, for many a decade finally came to the end of the road with the XE. In its place was a modern (for anywhere west of the black stump) coil-spring set-up that was made even more gee-whizz with the addition of a Watts link for lateral axle control.

And in the ESP’s case, there was actually some meat to the legend.

There were, meanwhile, pretty much two motivations for Ford producing the XE ESP. Although there had been no GT version of the XC model (the last of the rather Botox-influenced models pioneered by the XA in 1972) there was a thing called a GXL. As well as some GT-ish go-fast bits including the option of the 351 Cleveland, the GXL was an attempt to move the whole performance Ford thing upmarket.

Hence, the GXL was based on the Fairmont and got some soft trim and more kit (back when` more kit’ could be as simple as a full-length arm-rest). Many of them had the optional metal sunroof, for instance. Very cool now, even if it’s mounted in a vinyl roof, another popular fitment.

The first ESP, meanwhile, was based on the XD model, but since nobody then could see the end of the V8 coming, it was never seen as quite so collectible. In any case, the XE with that vastly improved rear end is the one to have now.

Anyway, this move upmarket was one of the driving factors in the ESP’s arrival, but another was surely, by the time the XE rolled around, a method of getting rid of the last few hundred V8 engines, both 3092 (4.9-litre) and the mighty 351 (5.8).

Which is how there came to be 260 XE ESPs with the 302 engine and automatic trans and another 100 with the same small-block and a four-speed manual tranny. But of most interest was the version with the 351 Clevo of which 178 were built and all of which were four-speed manuals.

Who knows why there was no auto 351. Maybe it was to do with the fact that ESP stood for European Sports Pack and nobody in Europe (back then anyway) would be seen dead in a car without a clutch pedal. Certainly it wasn’t because Ford didn’t have a tranny that could handle the urge, because it had been putting C4s and FMX autos behind the Cleveland for years.

At least it kept real estate agents and bookmakers out of the things.

All XE ESPs were built between February 1982 and November of the same year, and there were even a few six-cylinder ESPs. Those six-pot cars, then, remain the exception that proves the rule about demand being the inverse of supply.

But beyond all that, what WAS an XE ESP? Okay, the basic platform was the Fairmont Ghia which was really just a short-wheelbase Fairlane That meant you got power steering and air-conditioning; stuff we take for granted now but which was definitely super-deluxo back in 1982.

On top of that, the ESP buyer was also pampered with power windows, central locking, a power antenna and a premium sound system.

What makes the ESP so much more special than pretty much anything else in the Falcon catalogue at the time was the level of detail and performance gear that Ford crammed into the package. While the engine stayed standard (with its alleged 193kW)and the gearbox and diff were no different to any other V8 Fairmont, there were some important tweaks.

Those started with the four-wheel-disc brakes and continued with the Bilstein shocks and lowered springs. Add the 15-inch `snowflake’ alloys and 60-series Uniroyal hoops and you had yourself a reasonably complete three-course dinner.

Inside, the standard front pews were ditched in favour of a set of truly lovely Scheel buckets and the whole lot was trimmed in the soft-touch trim that spelled `luxury’ back in the day. The ESP got full instrumentation, too, with six gauges (speed, tacho, fuel, temp, oil and volts) housed in the big, rectangular XE binnacle.

Performance was strong rather than completely berko and there’s simply no way Ford could easily screw the big numbers out of the carburetted 351what with this newfangled pollution gear and whatnot.

So while it might sound like the same mechanical package as the XY GT-HO, the XE is not in the same ball-park stomp-wise. But it will swallow big miles pretty well and all that good gear on board makes for a pretty relaxing way to get around. And unless the backside drops completely out of the collectible car-market (again) values are only going one way.

Speaking of which, cars that were changing hands for $15,000 just a couple of years ago are now carrying stickers of up to twice that right now. But there are good cars out there for around the low-to-mid 20s and they seem like decent value given the rarity, pedigree and the fact that any XE with a 351 and a manual box that isn’t rusted from the drip gutters down is going to be almost as much as that. But if you want a minter, you’ll need to part with better than $30K.

Bear in mind, however, that the basic XE package hasn’t aged terribly gracefully. How many Falcons of this era have you seen that still have good shut lines and creases that still line up? Not many, huh? So check each car carefully.

Oh, and make sure you aren’t looking at a Falcon GL with the interior and driveline from a wrecked Fairmont Ghia and a set of ESP badges stuck on. Make sure, too, that all the ESP bits are present and accounted for; finding the exact Scheel seats and trim bits might be difficult in 2012. And like all these things, it’s only a real ESP 351 if it has the compliance plate and build plates to prove it; a re-powered 302 just aint in the hunt money-wise.

And finally, here’s the other crazy thing about Ford’s decision to limit the Falcon’s appeal by dumping the V8: The XE era was, as well as the last gasp of the Ford V8, the first time in modern history that the blue oval had thumped Holden reached the top of the Aussie sales charts. Talk about self-harming…