On paper and in pictures, on YouTube and via word of mouth, the Finke Desert Race seems like a brutally tough, bone-battering, car-wrecking Bad Idea.

But nothing can prepare you for the cruel insanity of the actual accursed course itself. It took me about 10 seconds, or less than 10 metres of travel, to realise it’s genuinely so much worse than I expected. So bad, in fact, that I’m at a loss to understand how, or why, people even attempt it in off-road trucks and buggies, let alone on motorbikes.

Wheels’ brave entrant, Toby Hagon, has been in Alice Springs for a few days, trying to get his head around what his body, and his frighteningly stock standard Mazda BT-50, are about to go through today and tomorrow. He tells me, with a wan smile, that he genuinely laughed out loud the first time he drove part of the track. 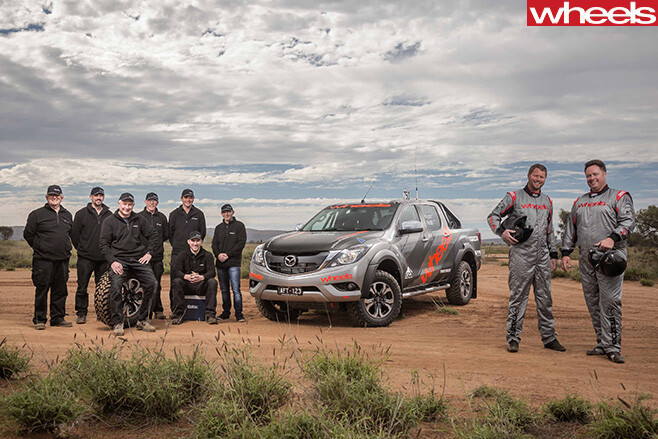 “I just couldn’t believe it, I thought it had to be a joke; you’re telling me we need to average 58km/h on this? We’ll be lucky to reach 58km/h,” he laughs, somewhat nervously.

Hagon is telling me this as we drive along a bumpy, brittle and battered gravel road, which I stupidly think is the start of the course. He has another good laugh after pointing out my mistake, and gesturing to a red-dust ribbon of rutted “road” about 50m to our right. Surely that’s not the course… but it is.

It’s not just how rough it is that’s the problem, of course, it’s the ridiculous rise and fall, with campers and spectators - more than 20,000 of whom will line the 226km course that competitors will run down to Finke today (Sunday) and back to Alice the next - already gathered around each huge lump and jump, keen to see carnage. 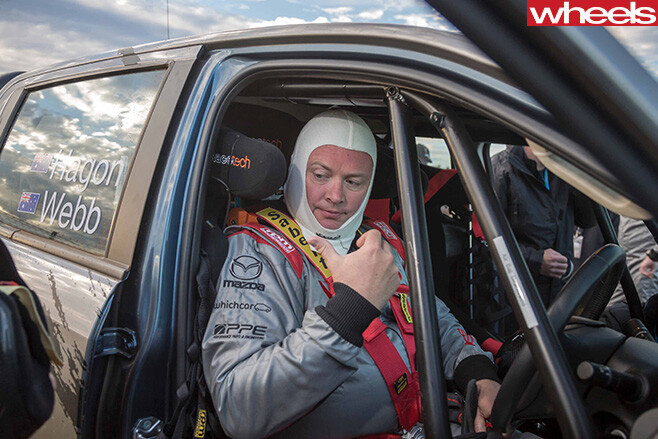 Hagon, one of five entries in the Production class, and, worryingly, the only one to drive his car to yesterday’s opening 8km Prologue stage in Alice, while the others were all trucked in, has a navigator to help him (he didn’t do much around the easy 8km pace-setting course, but Toby did well enough, qualifying third in his class in 7min 31sec).

“He’s done 80 pages of pace notes, but it’s not about where to turn, it’s not about getting lost, it’s all just advice about the terrain, and how bad it is,” he says.

“It’s the only event I’ve ever seen where ‘rough’ means good. We’ll be flat over those bits, but from there it goes to ‘bumpy’ and then ‘whoops’.” 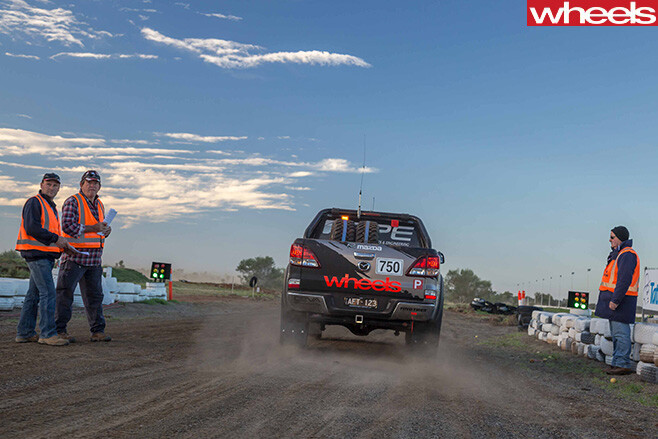 Not, I was relieved to hear, as in “whoops, we’ve crashed”. The whoops are the rolling sand dunes that make the event extra difficult, and these are further graded into small, medium, large, sharp, narrow and wide.

The best way to describe how theses whoops look is to make a kind of porpoising motion with your hand. Then picture a BT-50, without hugely raised guards or articulated suspension, attempting to do that.

We have a go at a “medium” whoop in one of our BT-50 support vehicles, and the way the nose rears in the air before the suspension crashes and cracks down leaves me just about biting through my lip, and swearing like a local who’s forgotten his bottle opener. And then Toby points out we were only doing 15km/h. “There’s nothing on the track that a four-wheel drive couldn’t get up, it’s just that you’re expected to do it at at pace, and if we hit these whoops at speed, it’s going to destroy the car,” Toby shakes his head.

His big concern is that there’s a minimum time for covering the first 140km of the Finke race, as far as Bundooma, of 2hr 15m (and a four-hour limit to get to the finish line), and if he doesn’t make that, he’s not allowed to race back again the next day.

I think his concern should be surviving that two hours without destroying his spine. His navigator tells us he’s wearing a kidney belt, presumably to prevent internal bleeding. Or the total loss of kidney function. I also think Toby should be worried that as many as two thirds of cars don’t finish at all some years. A couple went wheels up/roof down on the Prologue stage already.

Back at the Team Wheels compound in Alice Springs, basically a fenced in enclosure full of busted old LandCruisers and even more busted old dogs, the Mazda support crew - which includes half a dozen cars, a dozen staff, a helicopter and one very excited photographer, Thomas Wielecki - seems entirely confident that Toby, and the car, will make it.

They’ve even tried to lift his spirits with some nice touches, like sewing a colourful little handbag into the interior of the car to hold some snacks for the occupants, in case they get sick of the taste of their own teeth chips. 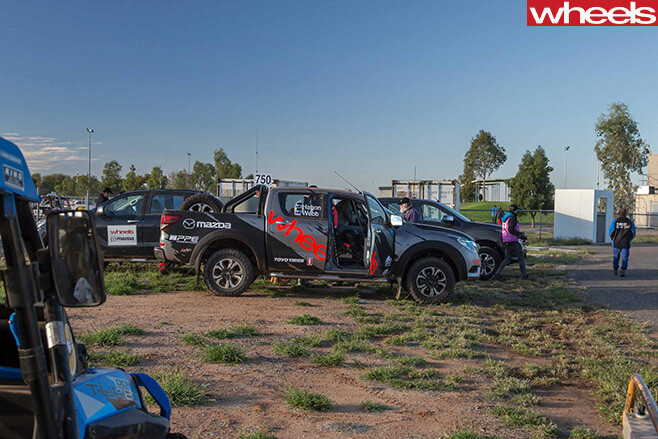 I contort myself through the roll cage and into the cabin and its squeezy race seats and think, not for the first time, that I’m so glad it’s Toby doing this, not me.

I see a switch marked “Siren” on the dash, and ask Hagon if he thinks he’s some kind of Batman. Apparently every car has to have one, to warn slower vehicles to get out of your way.

Having seen some of the other purely purpose-built machines entering this event, and heard that the top bloke in our Production class was a full minute faster than our Mazda, I don’t think the Siren will be getting much of a workout.

It’s going to be a very, very tough couple of days.