Whether it’s adding sugar to our morning coffee or wearing 3D goggles at the cinema, humans have created a world full of shameless artificial enhancement. It’s happening to cars, too, and one of the more curious phenomena is stereo-assisted engine notes.

The dilemma with our long-term BMW M135i is it’s one of these cars, its 3.0-litre single-turbo inline-six belting out a mean snarl when given the berries – and not least because it’s being lent a generous hand by the sound system.

But where once these systems sounded plainly, obviously fake – like someone put PlayStation in charge of the exhaust note – they’re getting better. Much better. In fact, of all BMW’s “Active Sound Design” enhanced performance models, the current M135i has to be the best we’ve heard yet. It’s so good, in fact, those unfamiliar with the wool-pulling-over-ears antics of car companies in this area, would suspect nary a thing. Case in point, this month I took our little blue bullet from Melbourne to Sydney, and back, and on the return leg was joined by two mates who know their turbo straight sixes, one stashing a heavily-modified 2JZ Supra in the garage, the other a stock FG Falcon XR6 Turbo.

The judging panel was given a freeway on-ramp and three instalments of 7000rpm to adjudicate – and the consensus was extremely positive.

Initially incredulous as I explained the mean, rorty engine note was computer-enhanced, the consensus soon shifted to acceptance and then even embrace, my Falcon-doting mate even going so far as to say he’d happily have the artificially-sweetened set-up in his XR6T “if it meant is sounded as ballsy as this”.

Personally, as the editor of a car magazine exclusively about performance cars, I’m not quite sure how I feel about this. Particularly after watching videos on YouTube where clever M135i owners have found a way to disconnect the Active Sound Design system, only to find a gasping, half-muted and rather underwhelming engine note indeed. (Funnily, some owners have gone the next step and installed the M4 engine noise software in their M135i instead. Now that’s weird.)

Only adding to the curiosity is the fact the M135i’s exhaust hardware itself seems entirely up to the task of making a sweet tailpipe racket. Starting with a burst of mean revs and settling to a loud, purposeful idle, under full throttle the M135i bellows a satisfying, rich growl. “Man, this car sounds awesome from the outside,” remarked another mate after chasing down our 240kW rear-drive rocket in his new VW Golf R.

In Sport Plus there are even exhaust over-run burbles, although more subdued and mature than the attention-seeking cracks and pops of, say, a downshifting A45 AMG.

I suppose it says it all in the case of the M135i that with the windows up, the cabin is a serene and peaceful place, impressively low on tyre and wind noise, which meant after nine solo hours on the Hume, I felt unusually great – and more bonded to our long-termer than ever. But what a strange place the world has become when M135i owners are debating whether a speaker upgrade would be just as effective as an aftermarket exhaust. 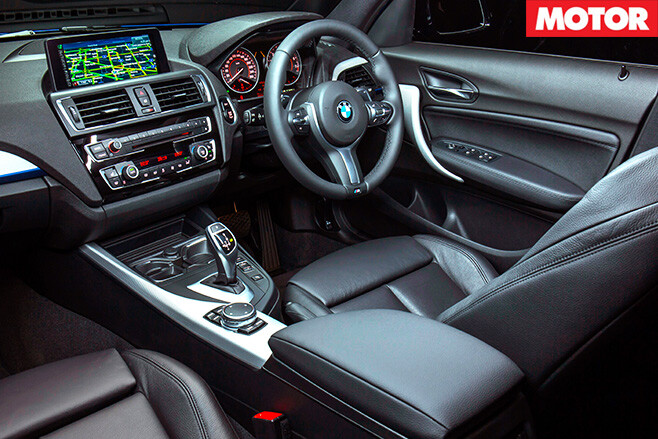 1. IDRIVE? ILIKE
Once widely derided, iDrive is now one of, if not, the best in-car entertainment system. Shades Merc for intuitiveness and Audi for slickness. Very easy to use on the fly, stable software and smart 8.8in graphics. Voice input even works great.

3. BUTTON UP
Adjust ESP and switch between Eco Pro, Comfort, Sport and Sport Plus modes here. Pleasingly, manual mode for the eight-speed torque converter auto is pull back for up, push for down. But steering paddles the nicer option.

4. WHEEL NICE
Chunky M-branded leather wheel feels great and one of the best tillers around. If it wasn’t for this, you could half think you’re in a 120i. As for cruise control buttons, this is how it’s done.

5. LOW(ER) TECH
M135i interior dates back to 2011, yet aesthetically doesn’t feel five years old. Shows its age in gadgets instead – no adaptive cruise, blind spot monitoring or head-up display. Radar cruise aside, top Commodores have all this stuff. But from a materials and build quality perspective, for $63K this is as good as interiors come. (For what it’s worth, M135i has no spare wheel. Tyre repair kit only.)

Want to see more of our BMW-M135i-long-termer? Check out the below: