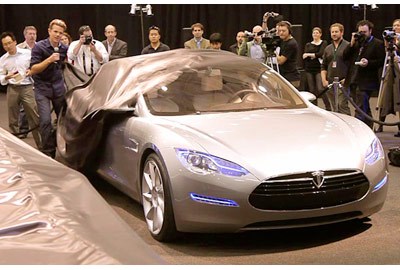 Up to now, Tesla has been best known for its US$109,000, Lotus Elise-based sports car. Now it moves into the mainstream with the Model S 4-door sedan.


The design was started when Henrik Fisker, who is now busy readying the Fisker Karma hybrid for production, was designing for Tesla. Now that job has gone to ex-Mazda designer Franz von Holzhausen, who likely did a last-minute detailing of the S.

In any case, the prototype shown at the launch wasn't just a rough, cobbled-together studio piece, but a very nicely finished, running example.

Tech details include three possible ranges, 257 kilometers for US$49,900 (after considering a US$7500 tax incentive from the government), with 370-km and 483-km battery packs available as an option.
Performance for the rear-drive sedan is claimed at 0-100 km/h in 5.7 seconds with a top speed of 209 km/h. There are plans for an all-wheel drive version and a Sport edition that could cut the 0-100 km/h number to 4.2 seconds.

Power is from a water-cooled motor and a lithium-ion battery pack mounted in the floor. That battery pack can be charged from 120V, 240V or 480V, with the quickest recharge time being 45 minutes. Tesla also figures the battery pack can be swapped out in five minutes, so you could buy the low-range model for daily use, then lease the long-distance pack for vacations.

Tesla claims that 483 km is about as long as any drives between meal stops and most such stops take at least 45 minutes, so the long-range package has across-country possibilities in the U.S.

Done as a 4-door hatchback, the layout will take 5 passengers with the option of two rear-facing child seats. Naturally the rear 60/40 split-back seats fold down for added cargo carrying capacity. And there is also luggage area up front under that normal engine bonnet.

In the center console is a 17-inch infotainment touch-screen with 3G wireless capabilities.

One problem. They aren't yet certain where the Model S will be built, and are looking for government support. 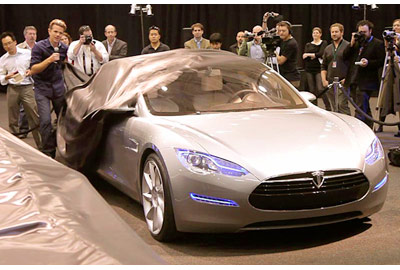 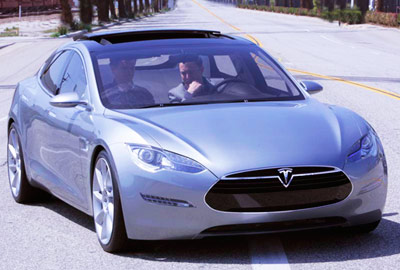 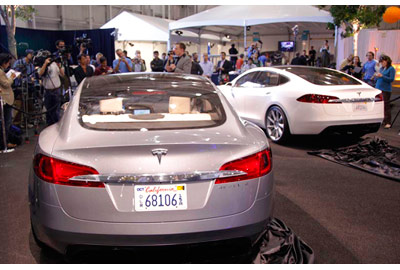