First published in the June 2013 issue of Wheels magazine, Australia’s most experienced and most trusted car magazine since 1953.

MOVING HOUSE normally sits right at the top of most people’s ‘hate’ list. The culling, the packing, the explosion of boxes – it’s an OCD sufferer’s worst nightmare. I’d rather have several root canals and a brutal prostate examination than have to move again. And if that sounds extreme (or maybe even perverted), consider this fact – I’ve moved five times in less than three years. No wonder I flinch every time I hear packing tape.

R8 it really moves me - June 2013
View this article in its original format in the archive.

Shifting states in an Audi R8 V10 Plus, on the other hand, somehow eases the pain. “Oh, you need an R8 transported up to Sydney do you? I think I’m free... You wouldn’t have a wagon that could tag along as well would you? Just in case the R8 gets a flat, or is attacked by Wildebeest.” Cue an A4 Allroad as backup.

The brief is to meet at Tullamarine at 10am so snapper Brunelli can dump his ride somewhere, then trace the scenic route to Sydney. What seems like it will be a leisurely start, however, turns out to be the beginning of a long, arduous day.

I wake at sparrows, make myself a tea, and start packing the A4, piece by piece, channelling how much I loved playing Tetris on Super Nintendo in the ’90s in order to make everything fit. Two hours later, the puzzle is complete, with barely a centimetre of room to spare, including the entire front passenger’s seat – even though three of us are making the journey…

At Tulla’, after more than an hour of additional shuffling, the packhorses are loaded. I lower my tired arse into the Sepang Blue R8 V10 Plus and wonder how in hell I thought this could work. Behind me sits a box, a stereo, and my laptop. Beside me are several bags, Brunelli’s camera case, a washing basket full of clothes, a pot plant I’ve somehow managed not to kill, and a plastic seagull. I can’t see anything through the left mirror, but it’s the plant I’m concerned about. What happens if the bloody thing tips over while I’m hard-up the R8 mid-corner?

As I squeeze in some throttle and open the V10’s pipes, the pot plant wilts under the strain and lolls about like a drunken teenager. It’s irritating the bejesus out of me and I’ve been driving for five minutes. Never mind – the R8’s new dual-clutch gearbox is magic, sneaking from gear to gear like a jewel thief, virtually oblivious to the driver, in a way the old E-gear/R-tronic sequential ’box could only dream of. Great as an open-gate manual would be, I can see why the vast majority of R8 buyers are going to choose the dual-clutcher over actuating a single clutch themselves.

Thing is, the V10 sounds relatively quiet – especially over coarser road surfaces beyond Melbourne’s outer fringe. Tyre rumble is ever-present, and while it isn’t to the almost deafening level of a 997 Porsche 911 Turbo, it’s still intrusive enough to be one of the few things that betrays the R8’s age. Already bored, I buggerise around with the console buttons and discover that hitting ‘Sport’ opens some valving in the V10’s exhaust for an instant uplift in acoustic pleasure. What it also does, though, is drop seventh gear from the ratio set and tweak the transmission’s brain to ‘frenzy’ mode. As soon as you brush the brake pedal, the ’box starts downshifting like mad – sometimes dropping several gears at once. And while the sound of the V10’s throttle-blipped braaap-ing is pure heaven, it’s frequently a bit too much. The solution is manual shifting. Become au fait with the R8’s redesigned paddleshifters and you can have seventh gear and a soundtrack to divorce for.

We dawdle up the Hume for the first 75 kays until the Broadford exit, then peel off to the right and feed into Strath Creek Road, then King Parrot Creek Road (I’m not joking…) until the Goulburn Valley Highway feeding into Yea. After Cathkin, the road’s name changes to Maroondah Highway and threads through serene Bonnie Doooon before reaching Mansfield and snaking up and down the scrum-delicious Mansfield-Whitfield Road (those Victorians went all-out thinking of road names didn’t they?). It’s a sensational 62km chunk of mountain that we’ve raved about before (Wheels, June 2012), but it’s also the last piece of really great, challenging road for the next 200-plus kays. May as well enjoy it. With the A4 lagging behind and not a single car in front, I squeeze the R8 down a few gears and press on. The union of its uprated 404kW 5.2-litre V10 and the new seven-speed dual-clutch is as strong as Bert Newton’s devotion to Pattie, like they were made for each other from the get-go. As the ’box grabs second, I trail some brake into a downhill left-hander, feel the nose bite, then squeeze the alloy throttle pedal to the floor. And get hit in the face by the plastic seagull, its beak narrowly missing my left eye. I instantly brake and grab the bloody thing, throw it behind me, then nail the gas. Frustration slowly fades.

Listening to the R8 wail its lungs out on an uphill straight is a great reminder of how magnificent a highly tuned, naturally aspirated engine can feel at full noise. The R8’s tacho turns red at 8250rpm, but the V10 will stretch to 8700, if you’re committed, before snagging the rev cut-out and abruptly falling back to eight-five. But you don’t need to have it screaming its lungs out to create music. From just above 4000rpm, the V10 has this bassy snarl that builds until it becomes wail central at six grand. And holding a higher gear means there’s ample opportunity for the R8 to create this rising and falling symphony. I haven’t even touched the pricey Bang and Olufsen stereo because, seriously, why would you when there’s an empty road ahead and you’re in an R8 V10 Plus? 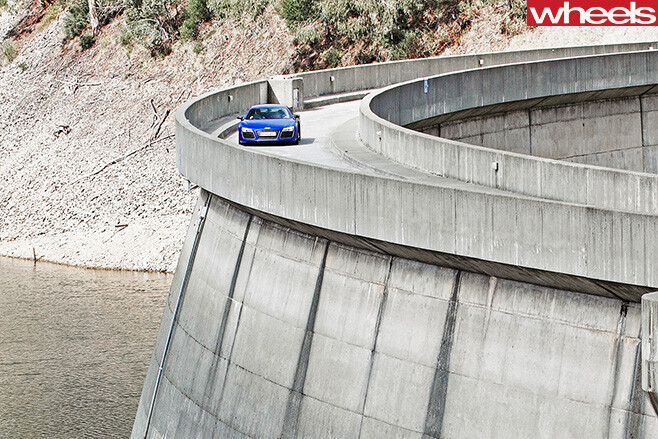 As the sun starts to fade, we reach the Hume Weir (now called Lake Hume) and skirt around its edge along the Murray Valley Highway to Tallangatta. As a kid, I used to live in Albury and we frequently swam in the Weir on hot days – once, when I was about 10, with the entire family in the nuddy, including my aunt. Yep, I’ve moved around a lot in my lifetime, but driving into Tallangatta makes my situation seem insignificant. In the 1950s, this entire town moved, buildings and all, to make way for the dam. Less impressive is the incorrect usage of an apostrophe in “1950’s” on the town sign.

Overnight, we stay in Corryong, just south of the NSW border … in a caravan park. After a humungous Parma and two Cascade Lights at the pub (I couldn’t do VB or XXXX), we creep into the caravan park, the R8’s Sport mode turned off, and the tradies snoring in other cabins are none the wiser. It’s 9pm, but we’re as buggered as they sound. We park the R8 next to our pre-fab box on bricks, and slot the Audi A4 behind a Landcruiser ute, then play rock-paper-scissors to determine who scores the double bed. On day two, even greater tarmac pleasures await, up in the NSW Snowy Mountains. We’ve driven these roads many times before, mainly because they’re among the best Australia can offer, though a lot of it is pretty narrow – especially the Corryong to Tooma Dam section. Considering I’m in a wide $420,000 supercar, I stick to taller gears, drop both windows and listen to the V10’s blare amplify off earthen banks. We’ve also managed to re-pack the effing pot plant deep in the bowels of the A4’s boot because I no longer care if it lives or dies. Today is about me. And the R8.

Perfect weather and mid-week traffic (or the lack of it) mean it’s almost open slather. The distance from Corryong to Cooma, via Tooma road and the Snowy Mountains Highway, is nearly 200km, but you’d be happy if it was 400 kays because the road is fantastic. Smoothly resurfaced, with the yellow road markers redrawn, you couldn’t ask for a better stage to demonstrate the V10 Plus’s enhanced thrill factor.

With plenty of vision ahead, I unleash the R8’s full ability, braking deeper, turning in more aggressively, adjusting its balance. With 3.1 turns lock-to-lock and large 11.8m turning circle, the R8’s steering isn’t quick, meaning you need to apply a fair amount of lock. But like any proper sports car, it responds best to a blend of brake and throttle inputs, not just steering. Trail the brakes deep into a corner and you can feel the R8’s nose bite, and its tail shift outwards slightly. It lacks the super-sharp turn-in of its Lamborghini Gallardo cousin, and even stripped of 50kg, the R8 Plus still weighs 1595kg. But it’s a great all-rounder. On non-adjustable dampers (the Plus ditches the regular V10’s magnetic-ride units), the ride is far from uncomfortable, and the R8’s forward vision is tremendous. On the fast, flowing Snowy Mountains Highway into Cooma, being able to see so far ahead is great news when you’re testing the abilities of a 404kW supercar. It’s a road you could never get sick of.

Over a home-made pie and salad, I stare out the window at my matte-blue move machine. Would I pay more than $420,000 for an R8 V10 Plus with options? No, I’d buy a house, and some politically incorrect big-block US two-door from the ’60s. But if I had to have an Audi R8, I can see why someone would want the V10 over the meeker V8, even though the privilege will cost you at least $80,000 more. Every time you listened to the luscious V10 warble and wail and crackle and snarl, the expense would be justified. The R8 V10 Plus is hardly the sort of thing you’d buy to go grocery shopping, let alone move house in. But you might, just to prove a point. What the V10 Plus deserves, though, is a Porsche-style ‘exhaust’ button, rather than disguising the noise amplifier with a gearbox-calibration setting.

Back out on the Hume, we gas up the R8 and hard-driven A4, and point them towards the dread of roadwork chaos on Sydney’s horrendous M5 Motorway. What should be a final 110km/h blast into town ends up being a crawl. In fact, I hate the M5 tunnel almost as much as I hate moving. But the R8’s dual-clutch ’box makes the whole affair relatively painless. And no one could ever tire of listening to that glorious engine.

From Marvellous Melbourne to the Emerald City. It’s good to be back, and even better to be back in the Wheels office. And what a great way to move.