Corby's rant: Give us a break 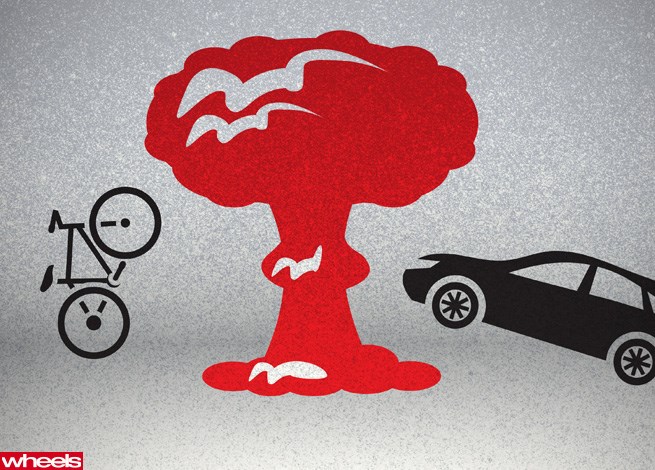 Cyclists are looking for trouble with their cam-do attitude

When the news media is raising outrage based on something awful that an innocent member of the public has filmed and then YouTubed, we can normally all get on board.

Awful phone videos of people being racially vilified on a train, or teenagers attacking some bloke on a bus, these are open and shut cases of people being arseholes, and we are all rightly riled.

But when I watch video of the recent “dooring” incident and the supposed subsequent abuse of a cyclist, which has caused such kerfuffle, I simply can’t bleat along with the apparent masses.

The clip (below) is filmed from a cyclist’s eye view on a GoPro helmet camera. It shows a taxi passenger opening his door, the bicycle barrelling into it, and the typically fired up and indignant cyclist then demanding his details so he can be reported to the police and, presumably, capsicum-sprayed and then Tasered.

Just ponder this for a start: The only reason the victim here is wearing a camera in the first place – and lots of cyclists do this now – is to try and catch out a motorist, or anyone for that matter, transgressing on their God-given right to ride their damn bikes wherever and whenever they like.

They’re a sad bunch, I don’t deny it, but surely even cyclists aren’t dim enough to sit and watch footage of their commute to work (although if they really cut up a motorist and made him angry they’d probably show that bit to their bicycle buddies). No, the only reason they do it is because they’re argey little buggers, and they love a fight.

What’s stunning about this incident, though, is that I can’t quite see how the bloke who gets out of the taxi – on the KERB SIDE of the road, mind you – in Melbourne’s Collins Street (where there isn’t a cycle path) is in the wrong.

Sure, if he was getting out on the right-hand side and didn’t check behind him, and thus took down a cyclist, that would be poor form and, under Victorian law at least, illegal. But surely the way the cyclist was riding up the inside lane, undercutting traffic, is so stupid that no normal person should have to be prepared for it?

“You ride up the inside of a car that’s stopped at the lights, you are a fool,” one of the guilty parties can be heard complaining on the video. Which sounds like a reasonable argument to me.

“The way people like you ride around is disgusting,” is another line that has really got the media, and the cyclists, fired up. But as a person who may have said even more inflammatory things to a cyclist in the past, I don’t think I should throw stones. The fact is, I resemble that remark.

Until this story broke, I was unaware – as the blokes in the video clearly were – that “dooring” was an actual criminal offence, and apparently the Victorian government increased the fines for this crime from $141 to $352, and the maximum court penalty from $423 to $1408. No doubt after some serious lobbying from one of the most vocal minorities out there – cyclists.

The main thing is that we all remember that these angry, sweaty little people are out there, filming every moment of their dull, droll and dreary lives, and that the next time you question why they should be allowed to make you wait while they cycle down the middle of a city road at 20km/h in a 60km/h zone, they might catch your comments on camera and make you a YouTube pariah.

You have been warned.