There is a perverse irony in the timing of the Falcon’s farewell.

Production will end at Broadmeadows on the same day as qualifying for the Bathurst 1000. Talk about adding insult to injury. For the closure to be scheduled just ahead of the race that added so much to Falcon folklore seemed, at best, insensitive; at worst, disrespectful.

To enthusiasts, the decision was typical of the disregard for racing that infected Ford Australia’s senior management in recent years and, indeed, the disinterest in the company’s local performance car heritage.

Ford maintains that sending the last Falcon down the line on Friday, October 7, when the diminished Ford ranks in Supercars will be battling for places in the Top 10 Shootout at Mount Panorama, is a coincidence dictated by the logistical requirements of the Campbellfield factory’s closure. Still, the fact that the timing struck a raw nerve among the Ford faithful highlights the long-running link between racing and the Falcon. The Blue Oval’s most enduring nameplate has, except during the international Group A-era from 1985-92, taken on local and foreign foes alike since 1967 with and without factory backing.

While neither as continuous nor as successful as Holden’s involvement, Ford’s presence throughout much of the past 50 years helped maintain Falcon’s street cred, even in the near-decade when there were no road-going V8 Falcons.

That Falcons continued to race in between Ford Australia’s official and covert participations was mainly due to the persistence of Allan Moffat and Dick Johnson. They kept the Falcon flame burning in the second half of the 1970s and the early ’80s respectively. When the homegrown Commodore versus Falcon V8 formula was introduced in 1993, creating the basis of what became V8 Supercars, Johnson and Glenn Seton converted from the Group A Sierras and laid the foundation for Ford’s full-scale return in 2000.

Broadmeadows has always had an inconsistent involvement, coming and going at various levels. In touring cars, it ran full factory Falcon teams in series production racing, including the then Bathurst 500, from ’67-72; then under the post-supercar scare Group C regulations (more liberal rules allowing more modifications that were supposed to bring an end to road-going homologation specials – but didn’t) in ’73-74.

Ford withdrew at the end of ’74 and didn’t return with an officially factory-backed team until the late Geoff Polites orchestrated Craig Lowndes’ defection from Holden to join a new Ford-funded team run by Fred Gibson. During Polites’ reign as president of Ford Australia in the late ’90s/early 2000s, the company’s racing and performance car traditions were re-embraced with a vengeance.

In between, Ford Oz waxed and waned between arms-length involvements – like how the backing of Moffat was disguised as dealer support – and backdoor funding, such as parts and accessories division Motorcraft’s sponsorship of Johnson and Ford Credit’s and Tickford’s support of Seton.

The apogee of illicit support was in 1977, when the Moffat Ford Dealer Team XCs of Moffat and original Holden defector Colin Bond swept all before them, including their immortal 1-2 form finish at Bathurst.

Johnson developed a Group C version of the XD Falcon, despite Ford Oz’s efforts to discourage the model’s participation in racing. His Ford fame – and encouragement and limited support from Broadmeadows – was cemented when he famously hit ‘The Rock’ while leading on lap 17 of the 1980 Bathurst 1000. Little did Edsel expect the response. A legend was born and donations arrived in the mail by the sacks full at Johnson’s Shell service station in Daisy Hill in Brisbane’s southern suburbs.

With Ford’s matching contribution, the appeal raised more than $70,000 – big money and a substantial annual racing budget in those days – and allowed Johnson to build a new car and keep his ‘renegade’ XD racing program alive to win the ATCC and the crash-shortened Bathurst 1000 in ’81. Established as a Ford folk hero, Johnson has remained a Blue Oval loyalist through thick and thin, with DJR Team Penske staying in the Falcon camp without Ford backing under the control of iconic American team owner Roger Penske.

Ford’s flirtations ended with committed technical and financial backing initiated by the late Howard Marsden, who reprised his early ’70s role as Ford Australia’s competitions manager at the start of the 21st century. 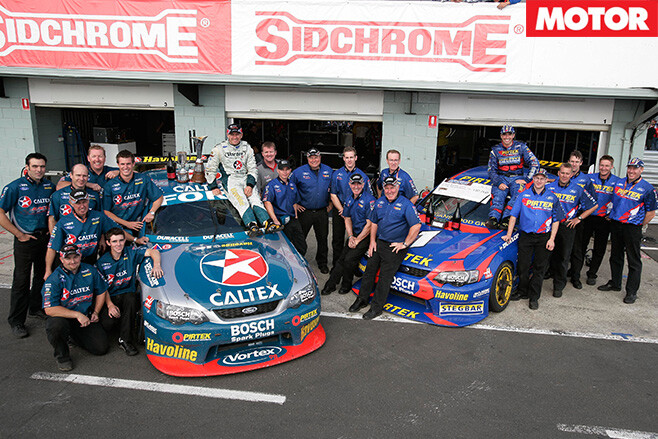 There was also substantial funding of Stone Brothers Racing and Triple Eight Race Engineering, along with significant support for Dick Johnson Racing, and despite FPR’s serial under-achievement for the rest of the decade, the noughties were golden years for Falcon on the track.

It also coincided with the switch from the recalcitrant AU Falcon racer to the front-running BA model, which was still identifiably production-based under the skin. From the FG in ’09, any relationship with the road cars – like its Commodore counterpart – became little more than cosmetic and all pretence disappeared in Supercars with the control chassis-based Car Of The Future (now New Generation) rules introduced in 2013. At its peak, Ford’s funding of Falcon teams in V8 Supercars was around $15 million annually, matching Holden’s expenditure.

SBR won the 2003-04 V8 titles with Marcos Ambrose and the ’05 crown with Russell Ingall in BA Falcons.

Lowndes’ escape from FPR to Triple Eight in ’05 immediately restored his race-winning fortunes and coincided with the team’s emergence under Anglo-Irish entrepreneur Roland Dane as a front-runner.

Triple Eight won three Bathurst 1000s in a row for Ford. Lowndes and then new teammate Jamie Whincup scored an emotional victory in their BA Falcon at Mount Panorama in 2006, claiming the inaugural Peter Brock Trophy just weeks after The King Of The Mountain’s death.

They shared a further two Bathurst successes in BFs in 2007/08, while Whincup won the first two of his record-setting six V8 crowns in a BF and then an FG in ‘08/09.

It was in the middle of ’08 that Ford’s commitment to racing started to waver once again. Broadmeadows announced that from 2009, it was restricting financial support to FPR and SBR, dropping Triple Eight and DJR.

The snub prompted Dane to remove Ford badging from T8’s FGs in ’09 – replaced by a feral pig motif in honour of minor team sponsor Hog’s Breath Café – and sent him into the welcoming arms of Holden from 2010. The rest, as they say, is history. Triple Eight became the dominant Holden team and in 2017 will take over the Holden Racing Team branding.

Triple Eight’s Holden hegemony has been interrupted by DJR’s defiant driver’s title win with James Courtney in 2010, without Ford support. Mark Winterbottom’s championship breakthrough in ’15 came with barely any factory backing and FPR was renamed Prodrive Racing Australia in anticipation of Ford’s full withdrawal this year.

FPR/Prodrive, which finally got its act together early this decade and improved in inverse proportion to Ford’s shrinking contribution, also denied Triple Eight victories at Bathurst in 2013/14 when Winterbottom and Chaz Mostert respectively triumphed in dramatic finishes. 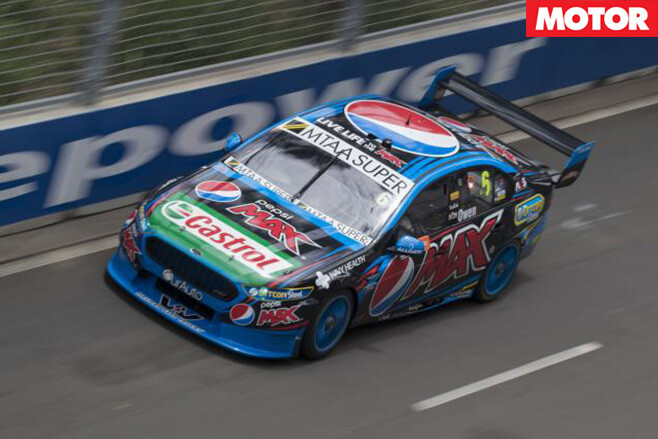 You have to wonder how much success Ford may have had with the FG and FG X Falcons had they stayed with Triple Eight. But by 2013, Ford Australia was clearly eying an exit from Supercars.

SBR’s funding would have been cut even if the team hadn’t been bought by Betty Klimenko and transformed into Erebus Motorsport and her privately funded Mercedes AMG folly, while FPR’s backing was slashed in 2014 and reduced to nominal support last year.

In yet another irony, Ford Australia’s final substantial contribution financed the development of the FG X aero kit, which tipped the balance in PRA’s favour in the 2015 V8 Supercars driver’s championship. Winterbottom’s success was barely acknowledged, much less celebrated, by Ford Australia, which sees no role for racing in its future a vehicle importer. It has trenchantly resisted all efforts – including Penske’s direct approaches to Detroit – to return under the Gen2 Supercars rules with factory backed Mustangs.

The October 9 Bathurst 1000 won’t be the Falcon’s final fling at Mount Panorama, nor is this year its swansong in Supercars. PRA and DJRTP will continue fielding FG Xs next year at least.

In fact, Falcons could continue in Supercars until well after final stocks are cleared from dealers next year, as the FG X remains eligible until Gen2’s scheduled expiration at the end of 2020. For the record, 16 ATCC/Supercars champions have won their titles in Falcons since 1973. Falcon’s arch-rival Commodore has only raced since 1980, yet the Holden hero’s drivers have netted 14 crowns.

At Bathurst, Falcons have won 14 times since the original XR GT’s success in ’67, compared with 22 Commodore victories since 1980.

Falcons had scored 262 ATCC/Supercars race wins up until the Sydney SuperSprint at the end of August – a far cry from the 459 race successes achieved by Commodores. The most successful Falcon racer – and likely to remain so – is the FG with 55 race wins. Way ahead is the VE Commodore with 103 victories, while the current VF is closing fast on its predecessor with 87 wins with another season to go before the next generation-look, twin turbo V6-powered Commodore-badged racer bows in 2018.

The Falcon legacy will live on in racing for at least another year, a reminder of the glory years when Ford and Holden went head-to-head on the track and in the market place.

Sadly, it will never happen again.

Opinion: The importance of driving your collectible cars

an hour ago
Alex Affat
Please enable JavaScript to view the comments powered by Disqus.
© Copyright Are Media Pty Limited. All Rights Reserved.