Out goes the Falcon’s iron head, and in swoops the Honda-built alloy one.

Out goes the Falcon’s iron head, and in swoops the Honda-built alloy one.

Thorough road-testing of Falcons new and old proves that Ford's economy claims for the Honda-headed model are probably conservative. But the rest of the car remains unchanged.

THERE IS ONLY one question of any real importance to be answered regarding the new, Honda-headed Ford Falcon: Is it more economical than the old Falcon with its cast iron head?

The answer must be an unqualified, Yes. What's more, the improved economy hasn’t been gained at the expense of performance. Ford's engineers, it must be said, have done a commendable job in giving the Falcon six fuel consumption that is decidedly superior to the old car and good enough to go at least some of the way towards changing the image of the Falcon as a petrol guzzler.

Of course the Falcon's economy figures aren't as good as those for the average two-litre fours but the gap has been narrowed. How many new car buyers, we wonder, realise the difference in petrol costs over a year, at an average 16,000 km, is less than $200, or just $4 a week?

In back-to-back fuel economy testing with our long-term XD Falcon GL 4.1 auto and a new XD1/2 Fairmont Ghia - with the same transmission and 2.92 final drive ratio - over our economy loop the difference was impressive - 7.8 km/1 (22 mpg) for the old car and 8.8 km/l (24.8 mpg) for the new. Officially Ford talks about a fuel saving of between seven and 10 percent for the new car but that would seem to be conservative.

Other checks, in a variety of driving conditions, between the two cars confirm that there is at least a 0.7 km/1 (two mpg) difference. Is that sufficient to halt the slide in sales away from what has, for so long, been the standard-sized Australian family sedan?

Probably not, though the reasons for the slump don't have much to do with the logic of fuel costs in objective terms as we've shown.

The economy improvement comes about through a weight saving of 24 kg, most of which was achieved by the new alloy head, and by increasing the efficiency of the 3.3 and 4.1-litre six-cylinder engines. Our performance testing proved Ford's claim that there hasn't been any drop in acceleration, for the times against the stop watch are virtually identical with those for the Falcon 4.1 auto tested in WHEELS June 1979. 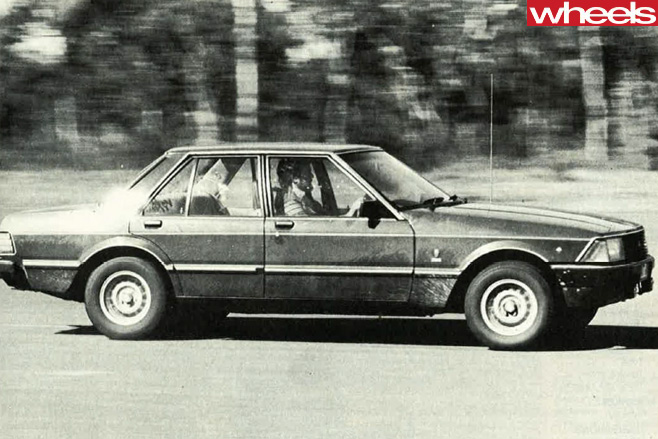 The 4.1 Falcon engine is a strong donk, noisy in a coarse way when pressed and certainly not as smooth as a bent eight but with plenty of bottom end grunt. Correctly geared to sensibly chosen indirect ratios it requires no more than a prod of the accelerator to pick up intermediate and increase the rate of acceleration.

Two things, however, need to be said about the performance/economy mix. The first is that driven hard the Falcon can still go through petrol rather more quickly than it should, and secondly the Sigma 2.6 automatic has the same performance level as the Falcon and, because of its size, feels more lively.

Certainly, however, the new engine seems quieter in the Ghia than the old unit in the GL, no doubt due to the additional sound-deadening materials fitted to the more expensive car. In both however, there is plenty of fan noise above 130 km/h and this, and the excessive wind roar from the A-pillars that has been apparent on most of the Blackwood range we've driven, means that they're not as relaxing at high speeds as the Falcon's image suggests.

Ford does have a 2.77 final drive which is used on the 3.3-litre four-speed models but it has yet to be offered on the 4.1 Falcon although such a move seems logical both in the interests of lowering noise levels and further improving economy.

Starting the 4.1 is easy. It requires plenty of choke from cold and then constant inwards adjustment. There is no choke warning light, an unfortunate omission on any car with manual enrichment of the mixture.

There is nothing to be gained by driving the car manually with the automatic selector although it is always pleasing to note that Ford (unlike Holden) doesn't believe in having a lock-out from drive to intermediate. In recent months we've come to the conclusion that Holden and Ford's philosophies are also opposed when it comes to shift smoothness. Holden's Trimatic is at its best when the accelerator is hard down on the firewall, while the Borg Warner unit in the Falcon only slips comfortably between ratios if the driving is gentle. Sudden lift-offs while in intermediate can result in a jerky change while kickdown occasionally produces a clunk on the way in to intermediate.

Of the rest of the Ghia there is little to add to the many words we've already published about the XD Falcon and its derivatives. Still, we were surprised to find that power steering is a $326 option. Considering the Ghia is the top model in the Falcon range - that is if you view the Fairlane and LTD as being different cars - this is a strange omission. Less than 20 percent of Falcon and Fairmont buyers bother to fit the power steering option but without the benefits of its assistance the car is cumbersome to drive. With over five turns lock to lock the steering is both indirect and heavy and contributes to creating the impression of a ponderous and extremely wide car.

The power steering is far from perfect for it does increase the already large turning circle and it is too light at high speeds, but with 2.6 turns lock to lock it is far more responsive in normal driving and the lightness, even nervousness, of fast driving is appreciated in commuter conditions. After 16,000 km in our long-term Falcon, in which we deliberately chose the standard manual steering because that is the way the majority of buyers prefer them, we can only say that power steering would be the first item we'd check off on the order form.

We also drove the new Falcon in its ESP form - ESP for European Sports Pack - and left it wondering how the marketing men could ever have convinced themselves that it warranted such a name tag. Perhaps it will attract some of the performance-oriented buyers who once drove Falcon GTs but have now graduated to Alfas but we doubt it. 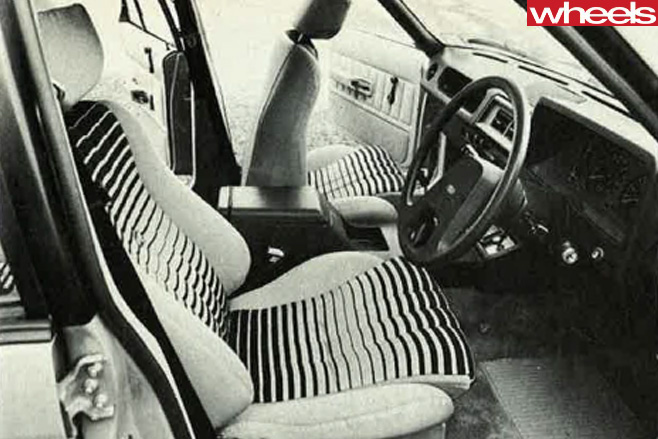 The macho man bit will need to be more than just image for the car has a 16:1 – as opposed to 20:1 on the standard Falcon - manual steering ratio with four turns lock to lock. Not only is the steering heavy, predictably in view of the seven-inch, 60 aspect ratio tyres, but it remains so at every speed although there can be no doubting the excessive wheel movements of the standard steering are reduced to more acceptable levels. But the steering loads up quickly in any cornering situation and the improved preciseness is hardly worth the efforts necessary to park the car. The ESP also suffers from spring and shocker rates which are out of balance, for the ride produced by the re-rated suspension is one of those old-fashioned stiffen-the-springs-and -it-will-handle jobs for it bounces the kidneys and is uncomfortable on anything less than a perfectly smooth surface.

No, more work in the area of suspension and steering is required before the ESP can even pretend to appeal to buyers of European sporting machine. Which only goes to point up the fundamental limitations of the Falcon's live axle, leaf-sprung rear suspension.

Quiet it may be in keeping tyre and road noise out of the cabin, but it lacks the genuine refinement of other, more modern, systems as the sideways step over any bump encountered during cornering indicates.

Still, Ford has managed to do what Holden couldn't, and that is to give the ESP a light gear change with short, well-defined movements between ratios. The clutch, too, is easy on the leg muscles. A manual Falcon is not the frustrating driver's car that a manual Commodore can be…

The four wheel disc brakes of the Ghia and ESP simply went about the business of stopping the car in a straight line. They really are very good brakes by any standards and a credit to the local engineers.

Inside you'd never pick the new model unless you knew the AM/FM cassette radio (of excellent quality, by the way) was now standard in the Fairmont. The steering column still seems unnecessarily long and many of the minor controls require a stretched arm. The relationship between the seats, pedals and steering wheel is more awkward than it should be. Scheel bucket seats are standard in the ESP, they are firmer in their padding and have more lateral support than the standard buckets but they also locate the driver even higher in relation to the steering wheel, so high in fact that many drivers will find their thighs rub against the lower edge of the wheel. The Scheel buckets are comfortable for tall drivers with plenty of under-thigh support but they still don't go back far enough.

Our original criticism of the rear seat remains for it is mounted too low and the cushion is rather shallow. Likewise the boot with the spare wheel sitting in the floor. Perhaps it is unfair to apply the word shallow in a general description of the XD but under that still very attractive exterior it is painfully obvious that there isn't the engineering depth, nor the refinement, that should be expected for a modern car in the '80s. For all that the new alloy-headed Falcon does represent a significant improvement over the old in the area of fuel consumption. That's important . . . but there's a great deal of development and expensive modification required elsewhere to turn the Falcon into a great car.