Bold looks and big power brought the fight back to HSV.

These are the photos FPV doesn’t want you to see – the company’s re-powered and redesigned 2008 Orion-based sports sedan line-up completely undisguised.

These pics, reportedly found on a Melbourne landfill site, represent a huge and potentially embarrassing leak for Ford and FPV, especially with the launch of the Orion Falcon still eight months away, and with the current BF Falcon struggling for sales. 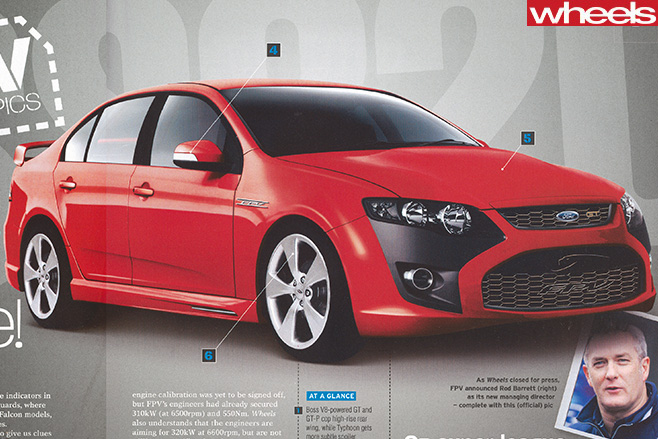 As these photos show, FPV’s new model range heralds a tough new look for the brand in an attempt to up the visual aggro and beat HSV at its own game. Perhaps the most dramatic aspect of the new look is the contrasting grey panel below the headlights – already dubbed the ‘raccoon mask’.

But not only will FPV attempt to lure buyers away from HSV with bold looks, the performance division, like Ford, will launch a power offensive to counter Holden and HSV’s recent dominance of the local performance-car market. 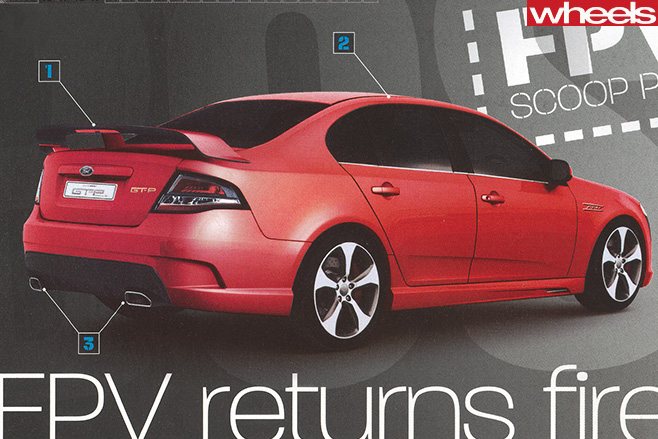 Model for model – with the exception of the Falcon XR6 Turbo – the Blue Oval cars will pack more power than the equivalent Holden and HSVs.

The FPV models move away from the traditional double-scalloped headlights, leaving them to Ford’s XR6 Turbo and XR8 models. Instead, the Typhoon, GT and GT-P use the same Mondeo-esque headlight treatment as the non-XR-model Orion Falcons. 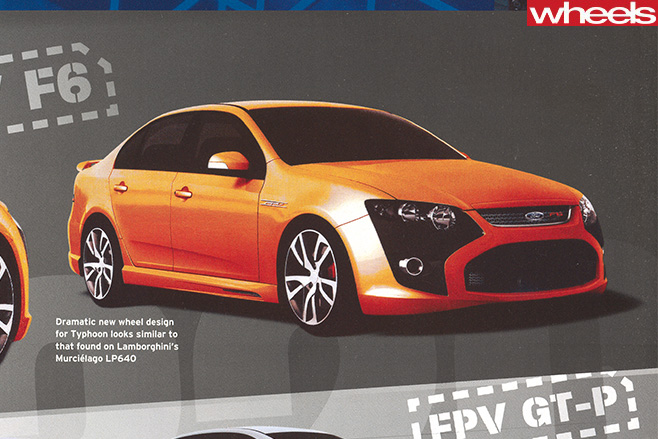 FPV’s models further separate themselves from their Ford brethren by adopting Mercedes-Benz style indicators in the wing mirrors. The front guards, where you’ll the indicators on Falcon models, now wear chrome FPV badges.

These undisguised pics also give us clues as to how the rest of the 2008 Falcon range will look when it launches in March. The turret shape is noticeably flatter and the glass house more shallow. And there are hints of a BMW-esque Hofmeister kick in the surprisingly narrow C-pillar. 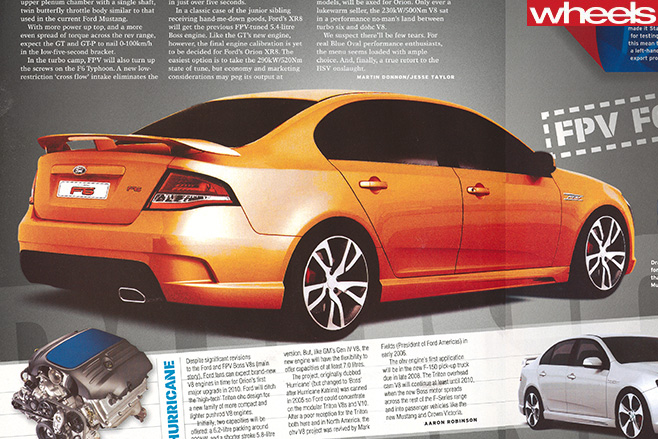 Big power lurks under the sexy new skin, with headline-grabbing numbers from the V8-engined GT and GT-P models. For the first time in FPV’s five-year history, the brand will have a car packing more than 300kW.

As Wheels closed for press in early July, our sources indicated that the final engine collaboration was yet to be signed off, but FPV’s engineers had already secured 310kW (at 6500rpm) and 550Nm. 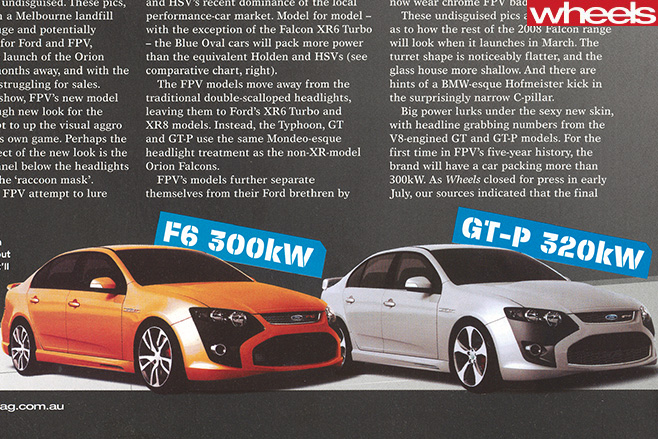 Wheels also understands that the engineers are aiming for 320kW at 6600rpm, but are not willing to sacrifice the throttle response and driveability across the entire range.

The final output will depend largely on drive-by noise regulations. The current 290kW Boss V8 already walks a fine line with the dB meter, but FPV’s engineers are looking to incorporate an Aston Martin-style bypass valve in the mufflers in order to chase 320kW. 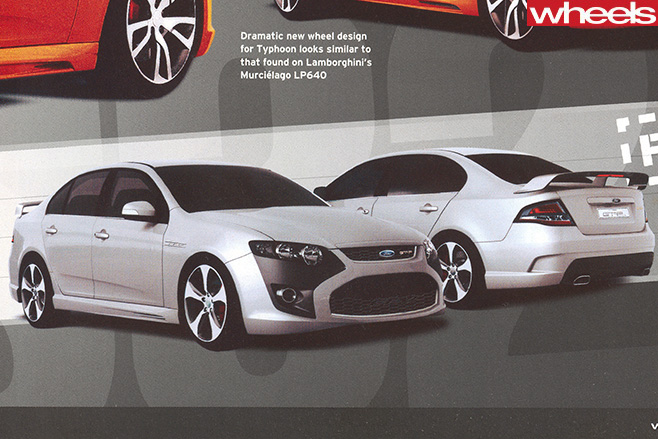 But where did this sudden power kick come from, given FPV’s 5.4-litre mill has not had a power increase since the brand and engine debuted with the BA GT in March 2003? FPV actually looked to the aftermarket for ideas to help the long-stroke engine make power.

Drawing on experience gained from his work on the DJR320 project, Ford tuning expert Rob Herrod of Herrod Motorsport explains the key to increased power is getting the V8 to rev past 6000rpm.

“When you do this, you then need to make sure the rest of the hardware is up to scratch. We replace the oil-pump gears in the engine straight away as the factory units can fracture – with catastrophic consequences.”

Aside from similar changes, expect FPV to fit larger inlet and exhaust valves to ensure the engine can meet the gas flow requirements associated with higher rpm.

To aid breathing on the intake side, the big-hitting V8 Boss engine gets a different upper plenum chamber with a single shaft, twin butterfly throttle body similar to that used in the Ford Mustang.

With more power up top, and a more even spread of torque across the range, expect the GT and GT-P to nail 100km/h in the low-five-second bracket.

In the turbo camp, FPV will also turn up the screws on the F6 Typhoon. A new low-restriction ‘cross flow’ intake eliminates the messy plumbing that runs over the cam cover used in the current Typhoon.

To make the most of the improved plumbing, FPV has wound an extra 0.13bar of boost pressure from the existing turbocharger (to 0.77bar), and the turbo 4.0-litre straight six will now thump out at 300kW and around 575Nm. Like the GT, the Typhoon should thunder to 100km/h in just over five seconds.

In a classic case of the junior sibling receiving hand-me-down goods, Ford’s XR8 will get the previous FPV-tuned 5.4-litre Boss engine. Like the GT’s new engine, however, the final engine calibration is yet to be decided for Ford’s Orion XR8.

The easiest option is to take the 290kW/530Nm state of tune, but economy and marketing considerations may peg its output at 280kW, giving it a 20kW gap to the more expensive FPV typhoon.

The XR6 Turbo is expected to get a 15kW hike to 260kW, augmented by at least 500Nm – up 20Nm. All this engine work has brought about a rationalisation, however. Wheels sources indicate that the sohc 5.4-litre V8, offered as an option on XT, Fairmont and Fairlane models, will be axed for the Orion. Only ever a lukewarm seller, the 230kW/500Nm V8 sat in a performance no-man’s land between the turbo six and the dohc V8.

We suspect there’ll be a few tears. For real Blue Oval performance enthusiasts, the menu seems loaded with ample choice. And, finally, a true retort to the HSV onslaught.