No model in the Falcon's 47-year history has ever launched into a market as fragmented and challenging as that faced by the FG. Here's how it was armed for battle.

Car designers are experts at tricking the eye. First impression of the new Falcon that's just been revealed exclusively to Wheels inside Ford Australia's Broadmeadows design studio? It seems smaller than the car it replaces. But the car code-named Orion throughout its development is actually a little longer nose to tail, and its bodywork is broader to cover the car's widened front and rear axle tracks. Yet, despite these increases, the new FG Falcon sedan seems more compact and muscular than the BA/BF generation it succeeds.

"Athletic and sporty" was the mantra from the start. These were the words used by former Ford Australia design chief Simon Butterworth when Wheels was shown a full-size clay model of the car in November 2004. "An air of European-ness," he went on, summarising the look that early market research had found customers desired. "We want movement and direction in it, but to really look like a Falcon." 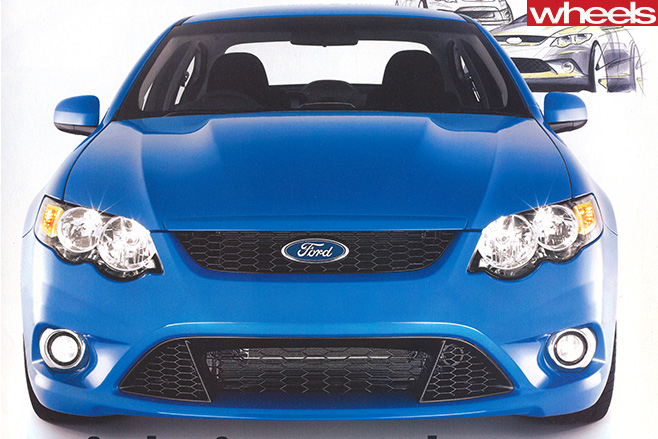 At that time, more than three years ago, these phrases had been rendered in the form of a silver-coated chunk of carefully crafted clay. Split down its centre line, each side of the model presented minor variations on what was already a refined design theme.

While it lacked the subtle surface sculpting of the final FG Falcon, the 'European-ness' was already evident and key features, like the shapes of the doors' shutlines and the stretched headlights, were already there. 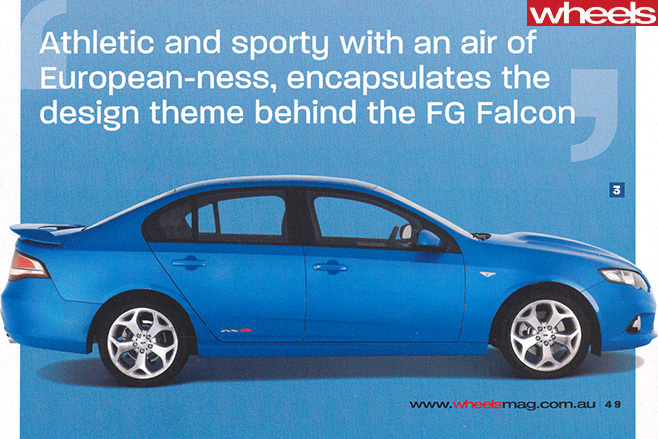 "This is the full-size [model] that we last took to research," said Butterworth, explaining the model's role in the design evolution process.

The Englishman's team of designers had already been at work for months. They'd first produced loose sketches, before moving on to 40 percent scale models, which were photographed, and used in further rounds of market research. Only once these phases were complete did the designers move to create the full-size model on display to us that day. 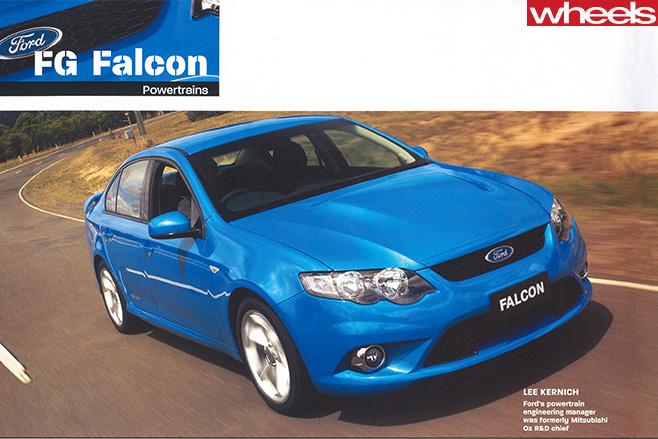 Way back then, even though a considerable amount of design work had been done, the program hadn't been approved by senior Ford executives in Detroit. That decision wasn't made until late the following year.

Not long after the Orion program passed through its major approval 'gateway' late in 2005, Butterworth was hauled back to Europe to take up a senior design role with Ford's Premier Automotive Group. His place was taken by an American, Scott Strong (above), who returned to the familiar territory of Broadmeadows in early 2006. 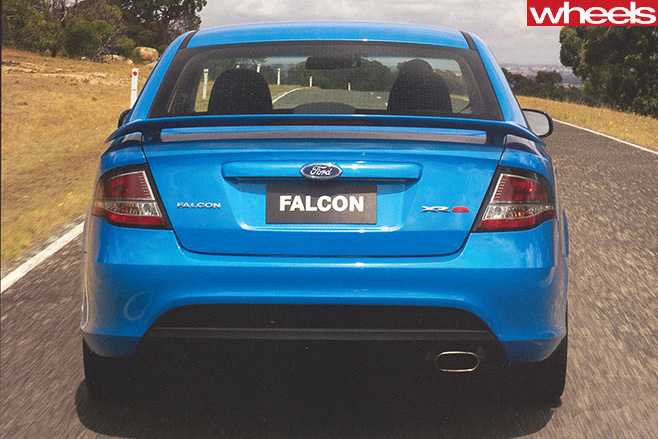 Strong had served as Ford Australia's design chief from 1999 to 2001. During that time he had managed the design of the 2002 BA Falcon and supervised initial work on the 2004 Territory. It must frustrate senior designers like Strong that they're often not around to see their work reach production.

Strong acknowledges that the FG Falcon's design is mostly Simon Butterworth's. Work was well advanced when he arrived in March 2006. "The base design was pretty much locked down," Strong recalls. Working with chief exterior designer Steve Park, Strong says, modestly, that he contributed "a bit" to the XR models and the FPV derivatives. 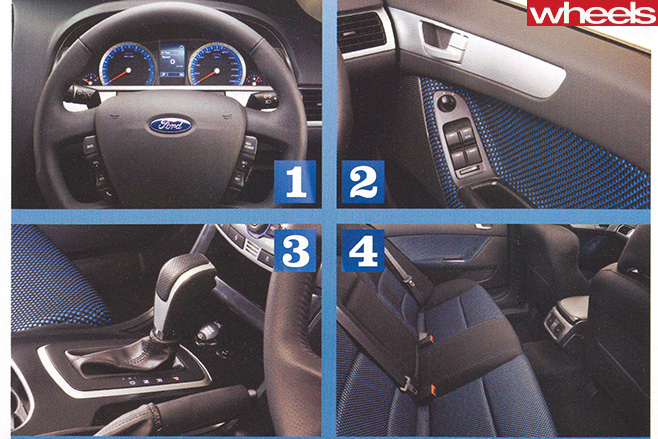 But Park adds that Strong had been exerting some influence on the car's style even through the months before his return to Broadmeadows, while stationed in Detroit. According to the experienced Australian, Strong made making the new Falcon look more compact and lighter a major objective. "It was very important that we had surface language in here that lightened up the car," Park says.

Strong firmly believes obvious largeness is something designers should these days strive to avoid. "We're in a time, geopolitically, where I think we don't want to make cars that look bigger and heavier," he says. "Sort of 'right-sized athletic' is probably the thing that customers are looking for." 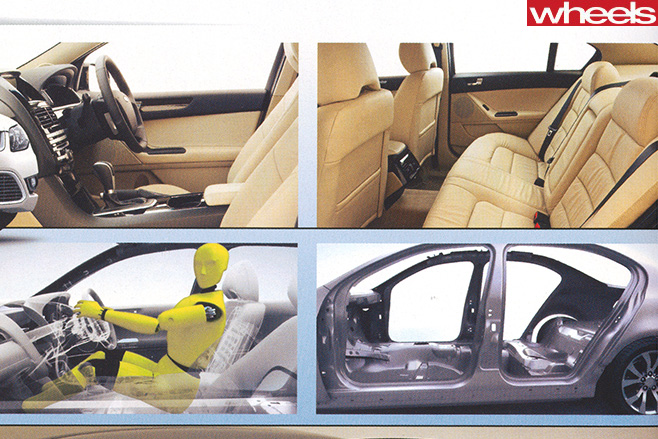 But the Broadmeadows designers didn't have an entirely free hand. The FG exterior may be all new - not a single panel is the same as the BA/BF generation - but Strong knew the Australian-designed Falcon had to resemble its overseas relations. "You'll see, through the range, the genetic or DNA tie back to things like Mondeo and Focus," he explains.

"While we wanted it to certainly fit the family photo, so to speak, we wanted to have unique Australian character." This meant the Falcon couldn't be a cookie-cutter replica of Mondeo. 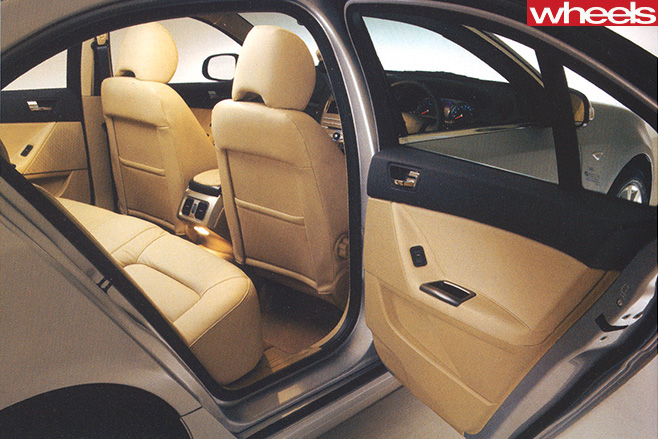 There were other constraints. Key objectives had been established for the new Falcon, such as a roomier interior with easier access, and the exterior designers had to accommodate these changes.

"We've addressed some of the well-known issues that we have with the outgoing product, with an A-pillar that's a little bit too fast and slightly too much tumblehome," says Strong. He indicates the new car's fuller turret, and continues. "We've got a much more dynamic and wedged beltline, and done everything we can to extend the DLO (daylight opening) and box the roof out a little bit." 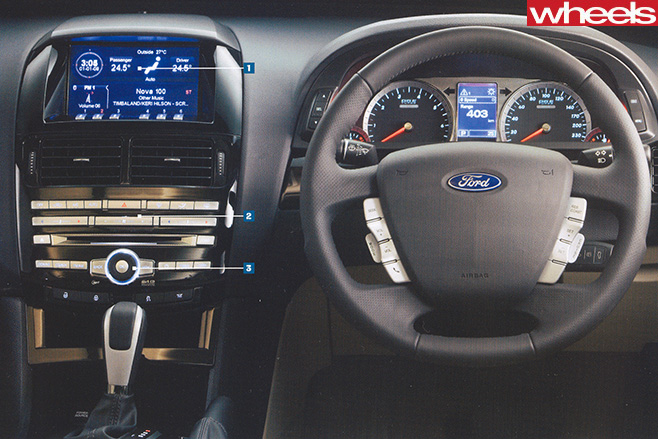 Strong believes that the Falcon's cabin has "just the right amount of fullness". The longer glasshouse, and the shorter rear decklid that's a result of the stretch, give the FG a quite different proportional feel from the BA/BF.

Explaining the techniques which disguise the FG Falcon's size, Strong adds; "We've clipped the corners of the car. We like the long centreline, because we think that communicates a real engine under the hood, but we wanted, as you can probably appreciate, the car to read very snub and athletic from side and quarter views. 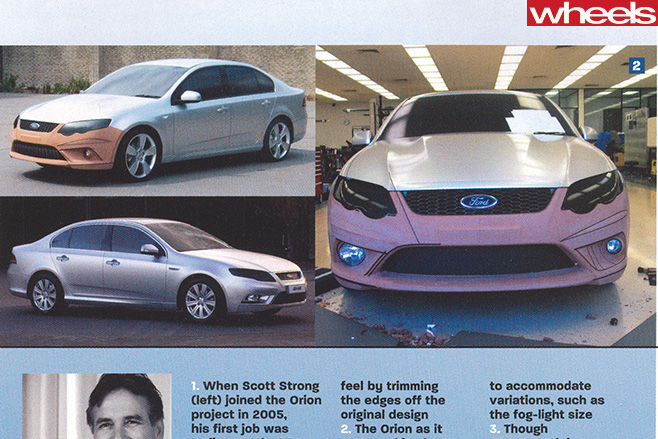 "When you get in the car, you'll be able to notice it's a more generous package," Strong continues. The designer also points out how much easier the car is to enter and exit. The enlarged, reshaped front and rear doors open a little wider, and there's more space for rear seat passengers to swing their feet into the car.

The FG also brings major changes to the Falcon model line-up. Known inside Ford as the 'V strategy', it creates an entirely new branch of the family. Three new, sports-luxury G Series models take the place of the Fairmont and Fairmont Ghia, and form one side of the V. 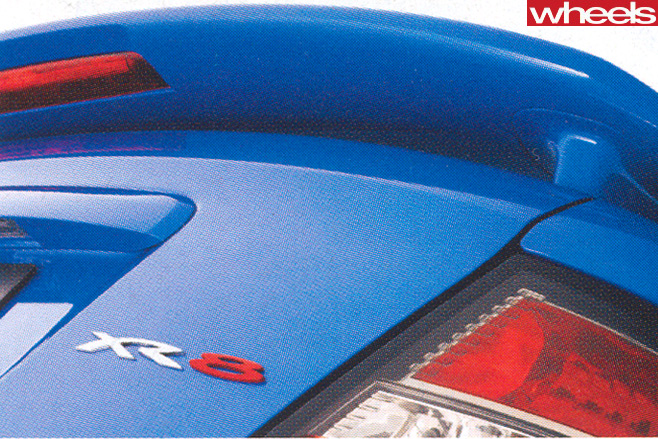 The selection of FG as the series name is, by the way, a farewell salute to the latter, long-serving nameplate. The other side of the V is occupied by the expected trio of XR models. Alone at the bottom of the V is the XT. There's no FG Futura.

Strong's designers were adjusting the degree of decoration applied to the FG line-up well into 2007. Some of the changes were in response to the 2006 launches of the VE Commodore and the Aurion. The arrival of these competitors led to the decision to add some chrome glamour to the XT, for example. 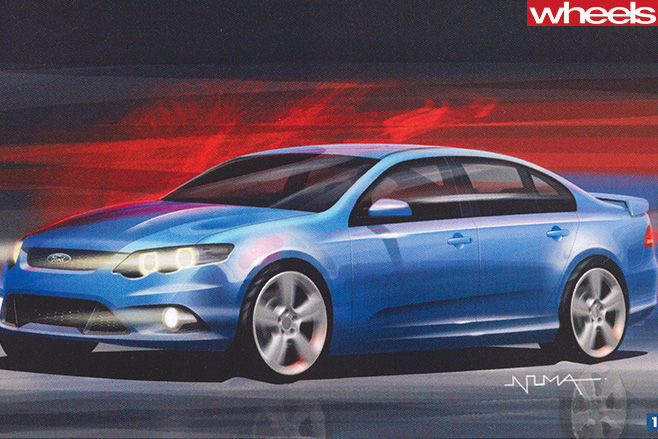 "We went through a process about eight months ago, after the Holden launch," Strong says. "As we looked at [VE] and the Toyota products, we just added some jewellery and some bits here and there to the XT."

The softly spoken design chief believes the FG Falcon line-up's exterior design will win large-car customers. "There's a real nice car out there on the street now by our competitors," Strong says of Holden's VE Commodore. "We think that we've done a car that, as I say, dresses very nicely."

He pauses for a moment before summing up the difference between new Falcon and recent Commodore. "It [VE] is a beautiful car that's tough as nails ... and isn't as elegant."