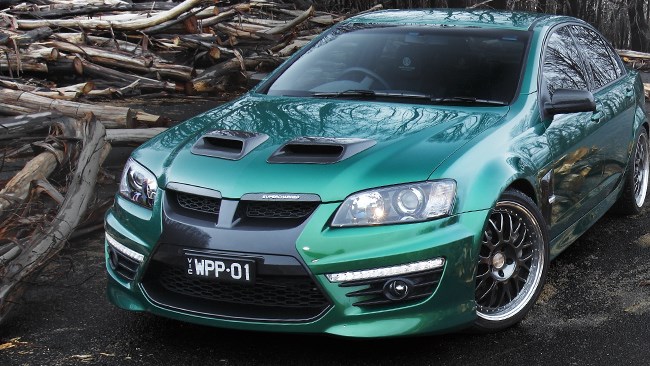 With 480kW and 803Nm, Walky’s latest is called ‘Supercar’ for a reason

There’s a war of opinion out there in Cardom. It has polarised, rarely openly and sensibly debated, and has simmered just below the surface for time eternal.


And there are two protagonists: the purveyors of OE purity against lovers of aftermarket tuning. The former ask how on earth Tim the Backyard Tuner, with his limited fiscal and R&D resources, could ever outsmart the engineering army that created a vehicle.

The latter claim the very same vehicle almost always rolls off the showroom floor short of its ultimate performance potential, hamstrung by costing, reliability, safety and myriad other contingencies factored into cars for the masses. Go-fast fans call it “compromise”.

There’s a third camp – G’day, how ya goin’? – who see degrees of truth in both sides of the argument. It’s a belief that pushing the performance envelope without overstepping balanced OE sensibility can create a stunning result.

So imagine a car that, on balance, is better than the factory jigger in almost every way. A car born of underlying co-operation between manufacturer and tuner. And without the risks, headaches and ballooning costs of the vehicle being treated like Tim the Tuner’s guinea pig. An extremely rare win-win, right?

That’s pretty much the Walkinshaw E2 Supercar in a nutshell.

Supercar, eh? Bold name, bold claim. But I reckon it’s on the money. Drive a lot of Commodores and HSVs – in 15 years of car scribbling I’ve steered a few – and it’s pretty clear, stock or tuned, when the stars align in a particularly exceptional example.

I tested Walkinshaw Performance’s 370kW blown 6.0 GTS – the wild, one-off Lambo Green cover car from February ’07 – and it was impressive. Ditto the red ‘WP470’ Clubbie cover car from September ’08 loaded with a blown 6.2 LS3 boasting fractionally less (470kW/770Nm) than its Supercar successor. Oh, the Clubbie was very good – brutally potent (12.5sec for the 0-400m sprint) yet sublimely controllable around Winton Raceway in conditions I’d call monsoonal. But its brittle ride and merely moderate road-holding ability left it well short of being considered exceptional.

The Supercar adheres to the formula of its predecessors: a big-grunt supercharger upgrade, plus enough dynamic enhancements (braking, handling, etcetera) to sensibly harness its newfound mentalness in a public environment. Get it right, and its true bi-polar motoring in the greatest sense – sublime Jeckyll one moment, maniacal Hyde character the next. And after extracting myself from the supercharged 480kW/803Nm beast’s driver’s seat after two days and 400 kays of mixed city, country and up-it-for-the-rent testing, I’m convinced its a much better car, in every sense, than its predecessors.

In fact, I’m struggling to think of a better, more impressive Commodore-based jigger I’ve driven. Ever. That’s not the shellshock of horsepower doing the talking, either. It’s more a realisation that, finally, someone has figured out how to harness outrageous, tuned output in a no-compromise package Nanna could fetch milk in.

The key is that Walkinshaw Performance – HSV’s kissing corporate cousin which recently relocated to the ex-HRT workshop, right next door to HSV’s assembly line – has been honing blown Commodore/HSV enhancment kits to perfection for years now.And, in truth, ‘Supercar’ is the name of a specific upgrade package – which starts from $34,990 – not an actual model of vehicle.

The green beast, though, is called the Walkinshaw E2 Supercar. It’s actually WP Program Manager Alan Hale’s manual GTS-based personal transport-cum-test bed-cum-demonstrator, with $49,920 worth of goodies. It’s a blurry line but, essentially, you could rock up to Clayton Business Park with $131,910 (plus ORC) burning a hole in your chequebook and you’re only a couple of door knocks away from a showroom-fresh turn-key clone. And, boy, it’s an eye-grabber. WP has created a strong Supercar identity using minimal carbonfibre exterior trickery that, for most part, improves upon the GTS look. Love the smaller, slim-line lip spoiler, subtle bonnet strips (GTS is chrome) and wing-mirror caps. And the carbon fender vents work in nicely. But those hippo nostrils are just bad taste.

The new ‘no-dish’ signature WP 20-inch rims are more handsome than the try-hard GTS 20s and blend in with the de-chromed carbon look effortlessly. In HSV Poison Ivy green, the Supercar has a sort of military motorsport vibe going on. WP still offers the pricey 22-inch satellite-dish Vendetta rims (with ridiculously slim 30-series front/25-series rear tyres) it’s peddled for a couple years now, but the 20s are the go. They’re wider (10 inches, up 0.5in) at the rear, the 35/30-series tyres offer superior ride comfort and handling, and they look tough-as.

Dual double-barrel cannon exhaust tips replace the dodgy Shockwave design stockies. And they’re almost as gorgeous to look at as they are to listen to. Fire up the blown 6.2 and the deep, rich baritone humming through the cabin makes the hair on your arms bristle.

The WP190 (Eaton) supercharger is also new, with a unique-to-WP housing and four-lobe high-helix internals. It makes the same 0.56bar (8.2psi) peak boost as WP’s old three-lobe (H122) blower, but it’s quieter, runs cooler, has more volumetric air efficiency and robs less energy from the crankshaft. The clever water-to-air intercooler, located in the valley between the heads and blower housing, remains. New frontier stuff is limited to the installation of a factory LS7 camshaft – specified for the 7.0-litre W427/Z06 Corvette V8, remember – into the otherwise internally stock 6.2 LS3. And the results are, erm, interesting.

But ease Supercar off the mark, dial up as little as 2500rpm, sink the boot, and you’ll want to yell “fire-truck” – or a rhyming word to that effect – the instant 800Nm clocks on at 3100rpm, followed instantly by a roaring supercharged symphony as the bi-modal flaps crack wide open to full volume at 3500rpm. Except you can’t, because the air in your lungs has been squeezed out by the manic forces of acceleration. Officially, the form guide says peak torque is at 4300rpm.

In reality, its 803Nm peak begins to taper off at this rev point, but there’s still 750Nm under foot at 5600rpm, by which time most of the 480kW is working its magic. That’s a huge, fat slab of flexible energy to play with.

And here’s precisely where the improvements have been made. Cruising in sixth, it’s effortlessly toey. In fifth, with just 2500rpm at 100km/h, acceleration is surprisingly punchy. At 3500rpm in fourth, it punches forward with every flex of your toe. The sheer rolling response of the thing, and how it masks the Supercar’s 1865kg mass, is remarkable.

Third? Well, that’s the button Scotty hits when Kirk commands “Warp Speed”. The mid-range kick is so enormous, and the throttle response so sharp, that it’s ostensibly an exercise in keeping the fat 10-inch wide rears glued down and keeping the shimmying tail tidy. Should you wish to unleash fire and brimstone from a standing start, a) the factory Launch Control works as it does in a normal GTS, and b) HSV’s standard LS7-spec clutch (that WP has been speccing for its supercharger kits for years) can handle the punishment. And its 4.25sec 0-100km/h and 12.48sec 0-400m times are definitely Supercar territory.

Thing is, there’s none of that startling urgency like you get from highly strung, big-output turbo engines. The throttle is very linear, like a volume knob for both energy and noise. In fact, after two or three hard launches it’s a doddle to dial up just the right amount of output underfoot – a bloody good thing when harnessing this amount of grunt on public roads shared with grandmas, nuns and school kids.

And right here, that OE sensibility – that balance – shines. Y’see, it’s not merely controllable, it’s controlled in its all-round dynamic behaviour. WP enhanced the E2 GTS’s magnetic-damper suspension – a high water mark for muscle-car poise – quite subtly, using its specifically tuned springs. The MRC remains untouched. Lean on Supercar and ask it to boogie over uneven, pockmarked country curves, and even in MRC’s taut Track mode, the focused blend of balance and grip is near-perfect.
The chassis does much more than simply deal with the extra poke. Those extra supercharged herbs actually electrifies the GTS’s dynamics. It’s as if the interaction of car and road is amplified, that somehow the laws of physics have been accelerated. It bucks and dances and skips and snaps across the blacktop harder and sharper than a normal GTS.

Like truly well-honed supercars – say, Porsche’s Carrera S – the WP beast remains lively and entertaining even with ESP left on. It takes some very anti-social behaviour to get ESP to intervene when set to Competition Mode (which remains in standard HSV calibration). The ESP issue is a big thing – a real show of depth in quality. Besides, when deactivated, the stock GTS is pretty wieldy with just 550Nm, let alone a blown 803. So it remains one very exciting, very quick and controllable road car while still under the auspices of the electronic fun police.

So it’s got Hyde covered. And for that everyday Jeckyll character most owners request 95 percent of the time, the Supercar is equally impressive. Though bold and clear, the engine ticks along at low-rpm and on a light throttle with a muted, satisfying burble and almost no hint of blower whirl. The ride comfort, with MRC in Normal, is exceptionally compliant, and it’s as quiet and comfortable as any other GTS when clocking up highway kays. And WP’s new stealth 600-watt Rockford Fosgate audio system improves the lacklustre stock stereo’s audio quality ten-fold.

For ticking boxes on both sides of the OE-versus-tuner argument, and melding the two camps together in harmony, the Supercar really is a page full of ticks (bar those nostrils). There’s even one really curly box most tuning fans accept as a mandatory concession to their wants – perhaps the biggest stumbling block that stops owners dipping in modification – that WP has covered off. And that’s warranty. Or, usually, lack thereof.

WP now offers what it calls “a real industry breakthrough” – a complete drivetrain warranty (zero or $660, depending on mods) for cars fitted with WP blower kits, provided they’re less than a year old and have less than 20K on the odo’. It extends for the balance of its new warranty. Tick.

The Supercar left us with one last little surprise. Actually, it’s a biggie. HSV officially claims the GTS consumes 13.9 litres per 100km on average. After 400 hard city and country kays, the Supercar returned 13 neat...

And that’s a shade of green we definitely weren’t expecting. 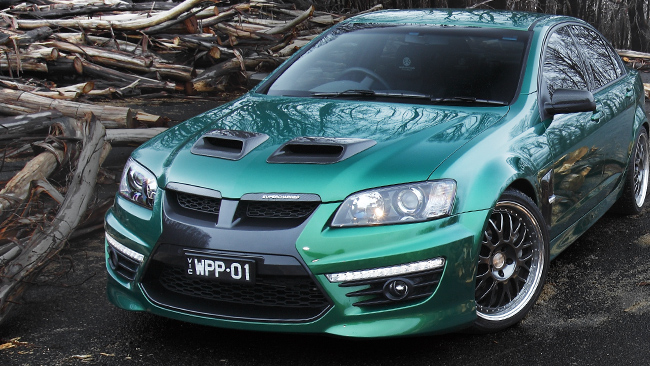 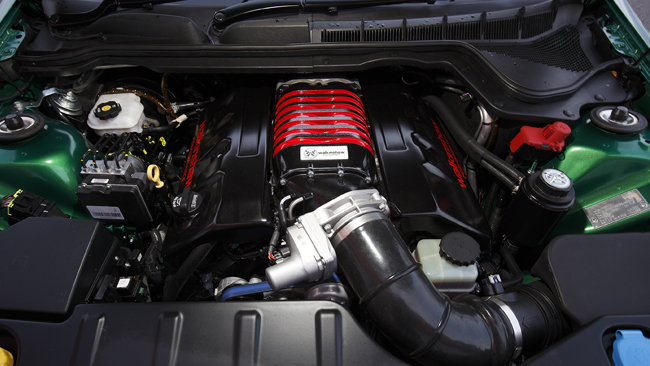 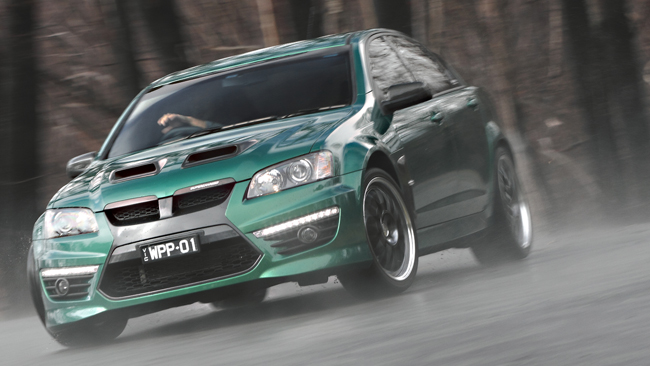