Group B rally greats head to auction in California

IT’S almost irrelevant that today’s rally cars are faster, Group B is still seen by most fans as the scariest, wildest, most extreme period in rallying history.

It spawned the craziest homologation cars and although its tenure was short, running a mere four years from 1982 to 1986, it’s remembered as a period when power probably outstripped the means by which to control it. In those four years, the amount of power required to win rallies doubled from around 225kW to about 450kW.

Roadgoing Group B homologation cars remain rare. With the development of Audi’s quattro in 1979, new rules were required and in October 1980 FISA ratified a trio of updated classes. All-wheel drive was now allowed, and cars would fall into one of three categories: Group N, representing production cars; Group A, representing modified production cars; and Group B, representing purpose-built “sports cars.” Only 200 cars needed to be built to homologate for Group B, and the rules were incredibly lenient. 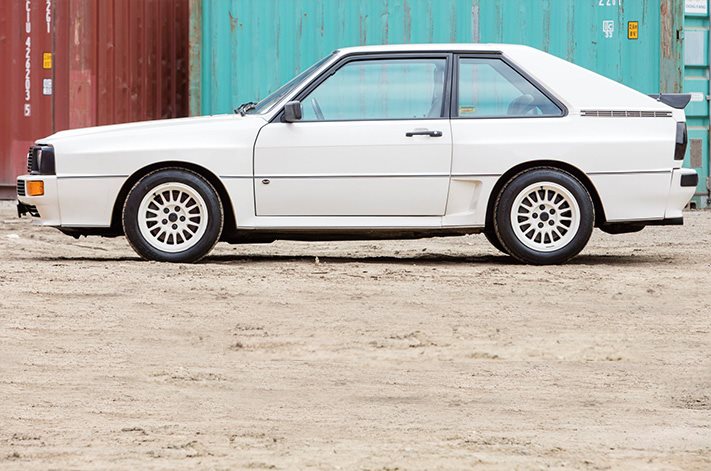 Aside from the usual basic safety regulations, there wasn’t much in the way of rules at all. You needed a roof, four wheels, two occupants side by side and to fit within certain weights and tyre widths according to engine capacity. On that final point, FISA mandated that a forced induction engine would get a multiplication factor of 1.4 versus normally aspirated lumps. Therefore a twincharged Lancia Delta S4 displacing 1759cc would be nominally rated at 2463cc (1759x1.4).

Seeing some of the greats of Group B assembled in one place is something. Knowing they’re all up for sale is even better. What we have here is a collection from a single owner of six Group B cars and one of their forebears, the iconic Group 4 Lancia Stratos.

The Stratos needs little in the way of introduction. Think Sandro Munari and Bjorn Waldegaard sideways on the Col de Turini, eye’s wide, sawing at the wheel in an attempt to keep the spiky, oversquare wedge pointing in vaguely the right direction. This car is the roadgoing HF Stradale, chassis number 0000008, which is a lot of zeroes. With less than 12,700km on the clock, this 1975 car has an authentic patina of age and that space-age shape might just have been Marcello Gandini’s finest work outside of Sant’Agata. 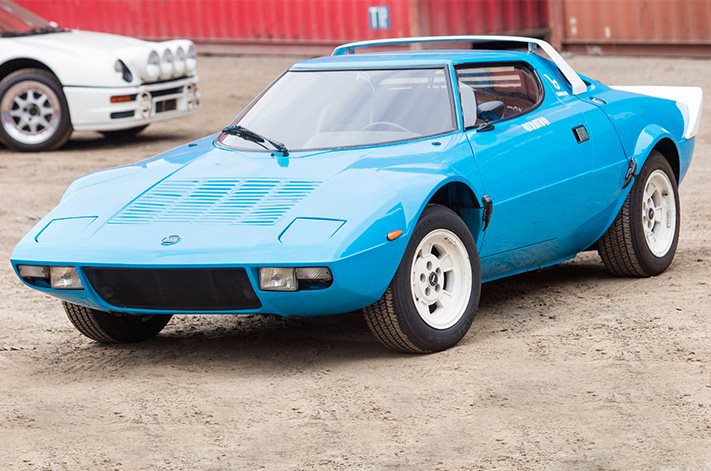 The car that retired the Stratos never quite attained the same aura, but the Rally 037 might just be the coolest car of the lot. The reason? It’s the last rear-wheel drive car to ever win a world rally championship.

In 1983, at the hands of Walter Rohrl, Markku Alen and Roberto Bettega, Lancia did the unthinkable and beat the Audi Quattros of Hannu Mikkola, Stig Blomqvist and Michele Mouton. Showing less than 9,400km, this Stradale version generates a mere 153kW from its supercharged 2.0-litre mid-mounted four, although the rally versions tended to generate around 210kW.

By 1985, Lancia had become a bit more serious, realising that rear-wheel drive just wouldn’t cut it against a new generation of smaller, angrier Group B cars. The response was the Delta S4. Effectively a re-engineer of the 037 chassis with all-wheel drive and a supercharged and turbocharged 1.8-litre four, the engine could easily best 375kW. 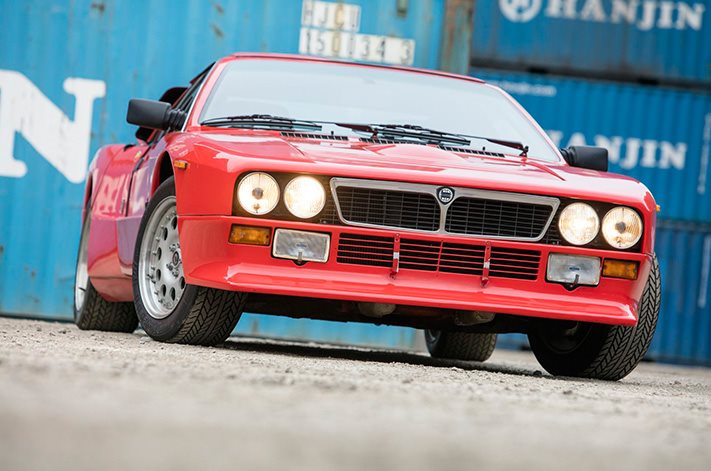 In 1985, Lancia’s engineers stress-tested the powerplant by winding boost to five bar, whereupon the engine would easily make 750kW. The all-wheel drive system was developed by Hewland, with up to 75 percent of torque available to the rear wheels. With five WRC wins from 12 starts, the S4 was something to be reckoned with. The Stradale road version made 184kW and featured some luxury appointments such as Alcantara trim, power steering, a trip computer and air conditioning.

Of course, Lancia wasn’t getting a free run at Group B. The car that kicked everything off, Audi’s Quattro was back, responding to the new crop of challengers that were nimbler and more focused than the big A1 and A2 quattros.

The Sport Quattro shaved weight by the relatively simple expedient of lopping 320mm out of the car’s wheelbase. It was actually a bit more complex than that, the Sport getting the steeper-pitched windscreen from the Audi 80 sedan to help cut reflections, a carbon-Kevlar body and far wider wheels. 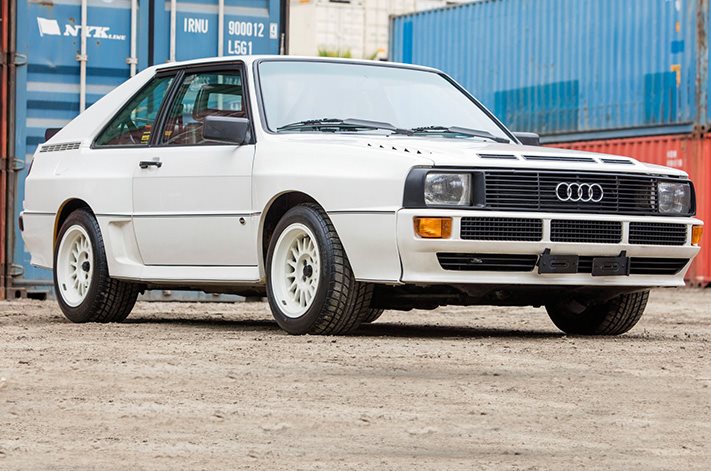 Despite its legendary reputation, the Sport quattro won a grand total of two WRC events; the 1984 Rallye Marlboro Cote d’Ivoire and the 1985 Rallye Sanremo. It’s perhaps better remembered in 441kW Pikes Peak form where Michele Mouton, a French lady with pigtails, famously schooled a bunch of Coloradan good ol’ boys. Then Walter Rohrl did it again just to make sure but without the pigtails.

This ‘Squat’ is a one-owner from new vehicle and is perhaps the most civilised of all the roadgoing cars here, with a slick Alcantara and suede interior and fascia that differs little from the standard ur-quattro road car. Bar perhaps the signature of Walter Rohrl on the car’s steering wheel.

If the quattro was a car that perhaps dined out a little on its reputation in later years, that accusation certainly couldn’t be levelled at the Peugeot 205 T16. In any objective capacity, this is the doyen of Group B rally cars.

With sixteen WRC victories (split between Timo Salonen with seven, Ari Vatanen with five,  Juha Kankkunen with three, and Bruno Saby with one win to his name), the 205 T16 won the constructors’ title in both 1985 and 1986 with Timo Salonen and Juha Kankkunen taking the respective drivers’ titles. 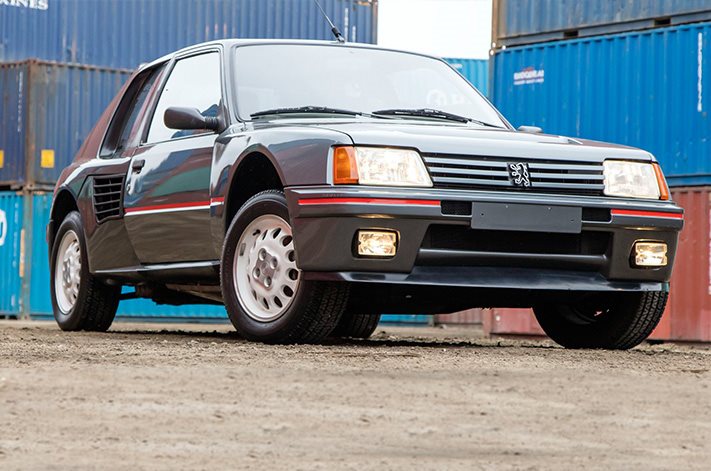 In many regards, the T16 is the most low-key of all the cars here, but its impact was enormous. The 147kW road car seems quite a pale imitation of the rally weapon, especially in these times when 300kW hatches are readily accepted, but it’s a car with a big weight of history under its belt.

Ford almost missed the Group B party. Designed by Ghia and rushed into production by subcontractor Reliant featuring a raid on parts bin pieces, the RS200 included a Sierra windscreen and cut-down doors, and only competed in one season of WRC before the terrible accident at Rally Portugal effectively ended the category. 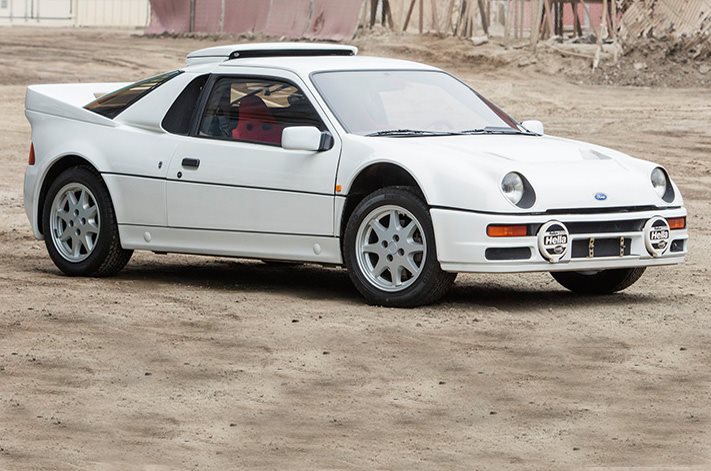 In many regards, the RS200 was a throwback to the Stratos insofar as it was a mid-engined supercar designed from the ground up to win at rallying and not a ‘silhouette’ version of an existing production car. Included in this sale is not only an original 1986 RS200 but also an Evolution model from later that year, one of just 24 ever built.

The RS200 ultimately met with quite an ignominious end. Unable to compete in rallying, most of the competition cars were wrecked on the European rallycross circuit. Then, to add insult to injury, the original bodywork tooling was purchased by Banham Conversions, who used it to make a front-engined kit car version based on the Austin Maestro. The horror. 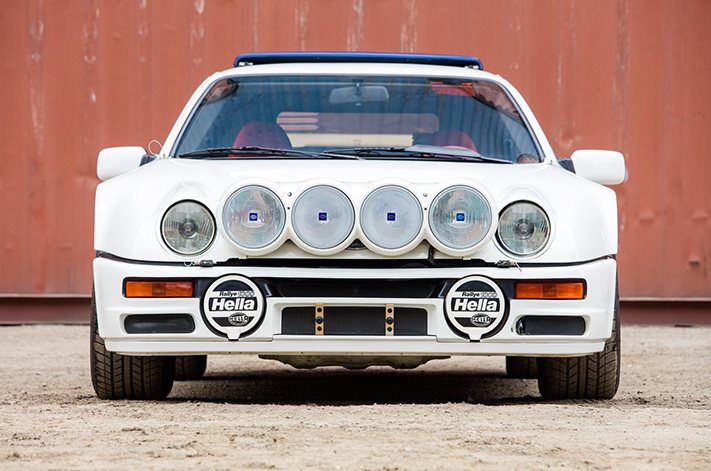 It's probably best known for setting the world record 0-60mph time of 3.07 seconds in 1986, a mark that lasted for 12 years. And driver Stig Blomqvist was short shifting. In a car with 225/50s on each corner. It might not have been a success on rally stages, but the RS200 was undoubtedly badass. If you’re looking at snapping up one or two, you know what to do. And if you already have a Metro 6R4 and a Citroen BX 4TC lurking in your garage, you’re looking at pretty much the full house. Happy bidding.

Bonhams Quail Lodge auction is held on 18th August 2017 in Carmel, California during Monterey Car Week. Even if rally refugees aren’t your thing, it’s worth checking out the rest of the consignment list here. 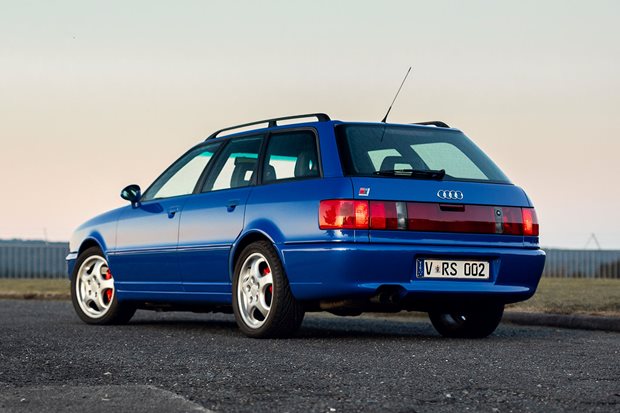