Marcus Gronholm steps quietly into his office. He tugs at his racing harness, slips a helmet over his ears and takes a peek at his co-driver... me. For the next five-and-a-half kilometres, I'm to be given an insight into the extraordinary talent of the Finnish farmer who has twice been crowned World Rally Champion. We'll tackle a special stage in the 2006 Ford Focus RS WRC car with which he recently won the Acropolis Rally.

There is a crackle on the intercom. “Are you okay?" he asks, in a thick Finnish accent. I am... sort of. The co-driver’s seat is set low in the chassis to optimise the centre of gravity. I'm 188cm tall, but only by peeping over the top of the dashboard can I see where we're going. I don't envy Timo Rautiainen, Gronholm's normal co-driver. To sit here, calmly reading instructions at 210km/h on an icy track, must take balls the size of watermelons. 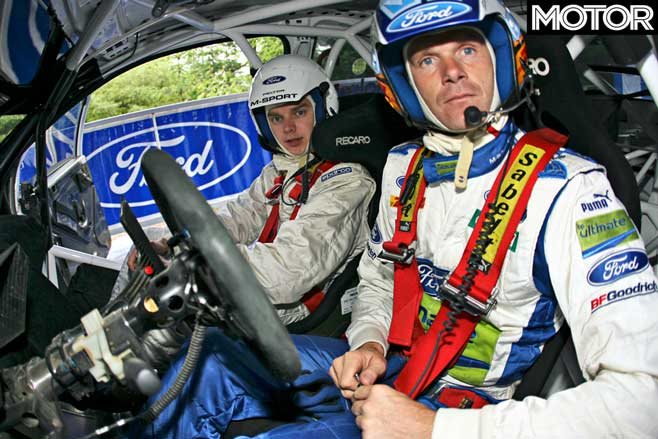 Gronholm pulls on his gloves and I take a moment to drink in my environment. When the World Rally Car regulations were first introduced, the cars looked like they'd been pinched from the local dealership even if, underneath the sober skin, was a million dollars worth of sophisticated hardware. They looked tame.

It’s now nine years since those first cars were produced and matters have improved. The 2006 WRC car is based on the XR5 Turbo, the 166kW sporting flagship of the second-generation Focus range. That car already boasts a bodykit but the WRC builds on this with the introduction of a dramatic rear wing and chunky wheel arches. Add a liberal sprinkling of war paint and it starts to look like a rally car should.

M-Sport developed this car in just 12 months from November 2004, when Ford’s senior management finally decided to continue its rally program. The development process included 7900km of testing and this year's schedule looks no less demanding. I wonder whether my chauffeur ever gets bored of driving a rally car. 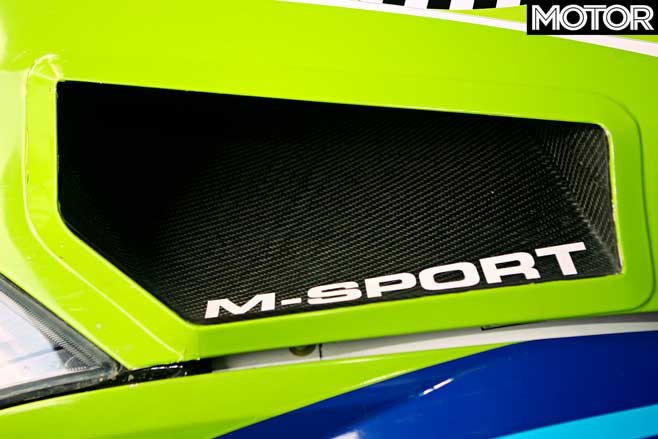 "Not really," he says. “Sometimes testing is quite boring, but it's very important. When you test, it's important to find something good because it gives you an extra kick for the next rally. You think, ‘shit, now it's good’.”

In contrast to the extrovert exterior, the cabin is neat and business-like. An electronic control module is located on the transmission tunnel, within easy reach of both driver and co-driver. This features basic information, controls for the electronic centre-differential - the 2006 regulations made mechanical front and rear diffs compulsory and even the indicators.

Another button remaps the engine for the road sections, where it's important to save fuel. There's a foot-operated horn button in the co-driver’s footwell, but it's not working today. “We disconnected it,” says a friendly mechanic. “People tend to kick it when they’re not used to the car." 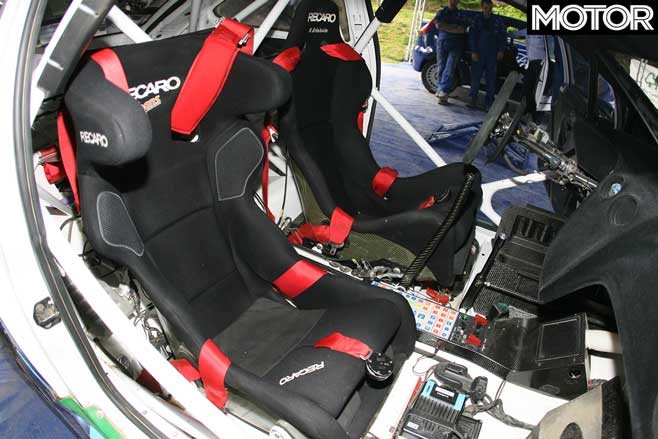 The engine is burbling happily in front of my toes. The road-going XR5 has a 2.5-litre, five-cylinder turbo, similar to that used in the Volvo S40 T5. The rally car, by contrast, uses a version of the 1988cc all-alloy Duractec lump found elsewhere in the Focus range.

Developed by the French engine specialists Pipo Moteur, it's fitted with a Garrett turbocharger and a mandatory 34mm inlet restrictor. The latter limits the power output to 223kW at 6000rpm, which isn't much in a car that weighs a minimum of 1230kg. The peak torque of 550Nm at 4000rpm is much more impressive, and is the key to this car's character. No road car is so responsive.

Gronholm squeezes the throttle and we're away. The noise is modest - the cars are limited to 98 decibels - and the acceleration feels less than fearsome. Last year, I rode with rally legend Stig Blomqvist in an old 335kW Audi S1 and its acceleration felt much more savage. The Focus, by comparison, feels soft and controlled. 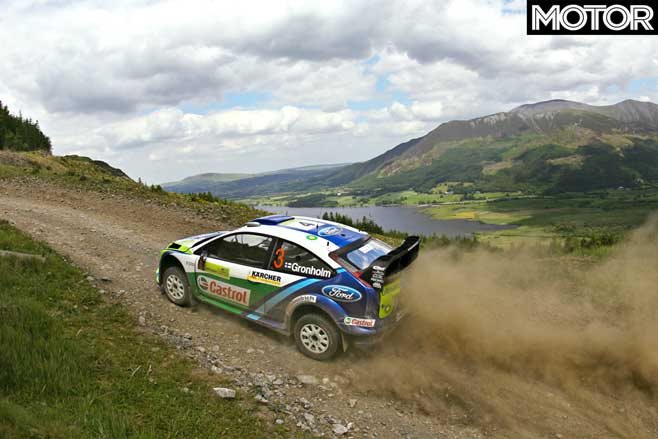 My driver sits high, arms bent, eyes staring dead ahead. There is a wonderful economy of movement. He looks cool, relaxed. Each of the five forward gears is selected using a steering~ wheel mounted paddle and a shift takes just 50 milliseconds (0.05sec). And with no clutch to play with, his left foot is used only for braking.

The course is rough, very rough. Ford has been testing both cars here for a couple of days and giant ruts have been carved in the track. Gronholm reckons it’s more like the mountain tracks of Greece than typical Pommy conditions.

The car's specification is unchanged since the Acropolis. The spring rates are tuned for rough ground and they deliver an astonishing ride quality. Not since I drove Mitsubishi's Dakar Rally-winning Pajero Evolution have I experienced such extraordinary comfort from something so focused. We crest a brow and jump for what feels like ten metres, but the landing is soft, measured. Where I'd expected the Focus to crash and bang, it glides. 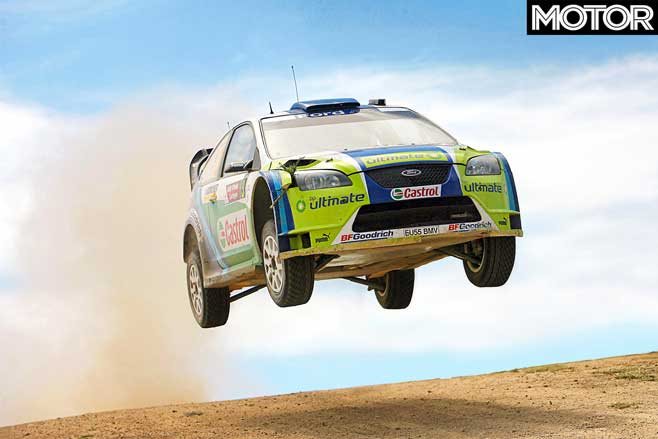 The corners also lack drama. The steering offers just 1.5-turns from lock-to-lock, so Gronholm's inputs are modest. With comparatively little power to play with, conservation of momentum is everything. The spectacular, sideways driving styles of yesteryear simply don't suit the modern cars. “If you want to go fast, you want a little bit of understeer at the start of the comer," says Gronholm. “Then you stay on the throttle and try and avoid oversteer. It’s a bit like slalom skiing - click... click... click. That's the feeling.”

Gronholm's feet are constantly dancing on the pedals. “The Ford engineers went completely crazy when they saw my data for the first time," he says. “I was playing with the brake and throttle all the time - parp, parp, parp. I'm not conscious of it; it's something I do naturally."

Natural is the right word to describe Marcus Gronholm. By the midway point I've relaxed and I'm enjoying the ride. I’d expected flashing past trees at 160km/h to feel frightening, but it doesn’t. Not even slightly. I’m in the company of a man who's so on top of his game that my only reaction is to sit back with total confidence and admire. 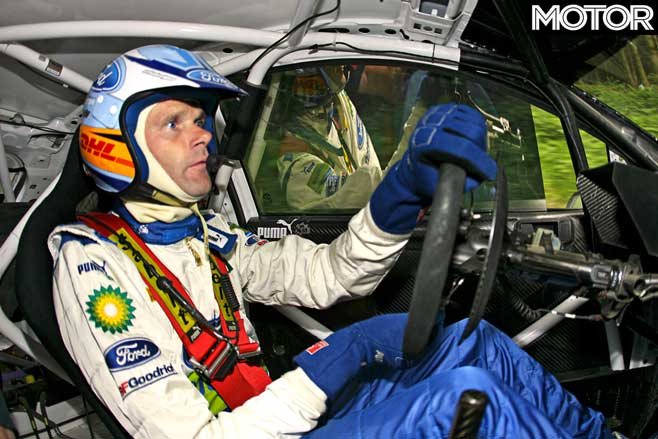 Gronholm prods the brake and we cruise gracefully back into the service area. We clamber out and I ask him the question I've wanted to ask all day. Last year, Michael ‘Beef’ Park, co-driver of Gronholm’s 2005 Peugeot teammate Marko Martin, was killed in the Wales Rally GB. Does he not think that driving through a forest at up to 210km/h is a crazy thing for a 38-year-old to be doing?

“Sometimes it comes into my mind what happened to Beef. We were in the same team and we were good friends. It was bad, really bad," says the father of three sadly. “Sometimes I think this is a crazy sport, but I still enjoy it.”

There is a flurry of excitement across the paddock. A young, blonde model has turned up to pose with Gronholm for a merchandising catalogue. “I don't think my wife will like it," he says as we shake hands. Still, it's not what you call a tough day in the office. 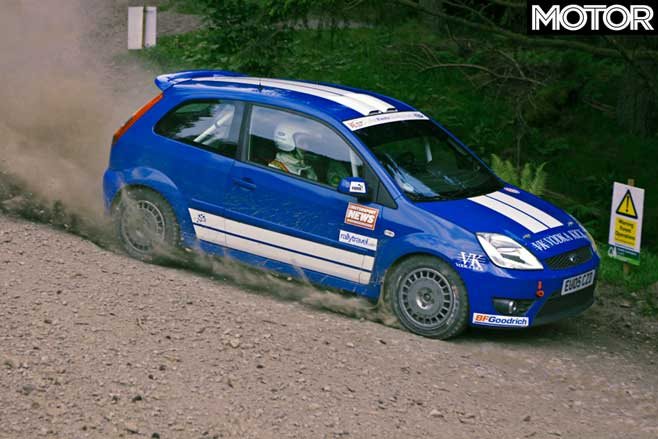 As a warm-up to the ride with Gronholm, we were taken through the stage by ex-Ford works rally driver Roman Kresta in a Group N Ford Fiesta.

Its 2.0-litre engine delivers 121kW and 202Nm. and powers the front wheels through a five-speed dog 'box. It's all about simplicity and parity if you're off the pace in the Fiesta. then you've only yourself to blame.

In many ways, the ride was more dramatic than it was in the WRC car. In order to counter the natural understeer, Kresta deliberately unsettled the Fiesta on the approach to a corner. “The technique is so different to a World Rally Car." he explained. “You need to set a front-wheel drive car up for the corner. You cannot use the power to adjust its attitude like you can in a four-wheel drive w. It's a totally different approach." 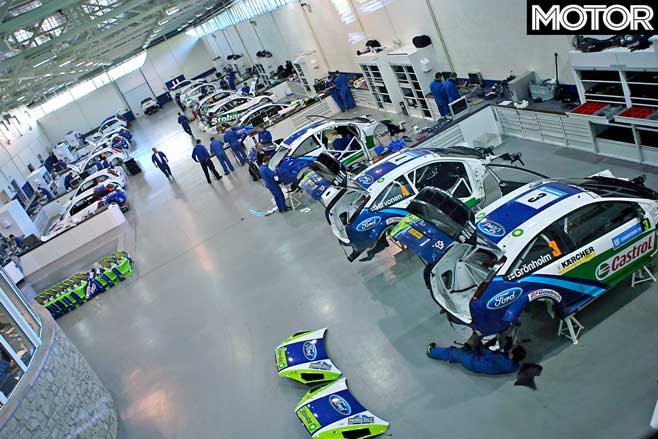 Given the lunacy of the sport, it seems fitting that Dovenby Hall, the home of M-Sport, used to be a mental asylum. Team boss Malcolm Wilson bought the 115-acre estate . In January 1998 and spent two years and a hefty chunk of Ford cash making it motorsport nirvana.

These are needed - there are now 56 Focuses competing across the world and M-Sport offers technical assistance to them all A 2005 car, in case you're wondering. is yours for a mere million bucks. Plus tax.

Some of the attention to detail is awe-inspiring. Out favourite object is a beautifully crafted piece of titanium that sits in the wheelarch and scrapes the dirt from the rear tyres. It's so utterly over-the-tOp as to be a work of genius.