We were eager to try our hand at one of two Mazda MX-5 Cup Racers in the country, but could it still possess everything we loved about the road-going car?

DAMN rain. I can hear it now, even through my helmet as I sit cocooned in the rollcage-encased cabin, pitter-pattering away on the tin roof of the pit garage, taunting me with its relentless thrum.

“It’ll be fine,” I lie to myself, resolutely ignoring the lizard part of my brain that taunts: 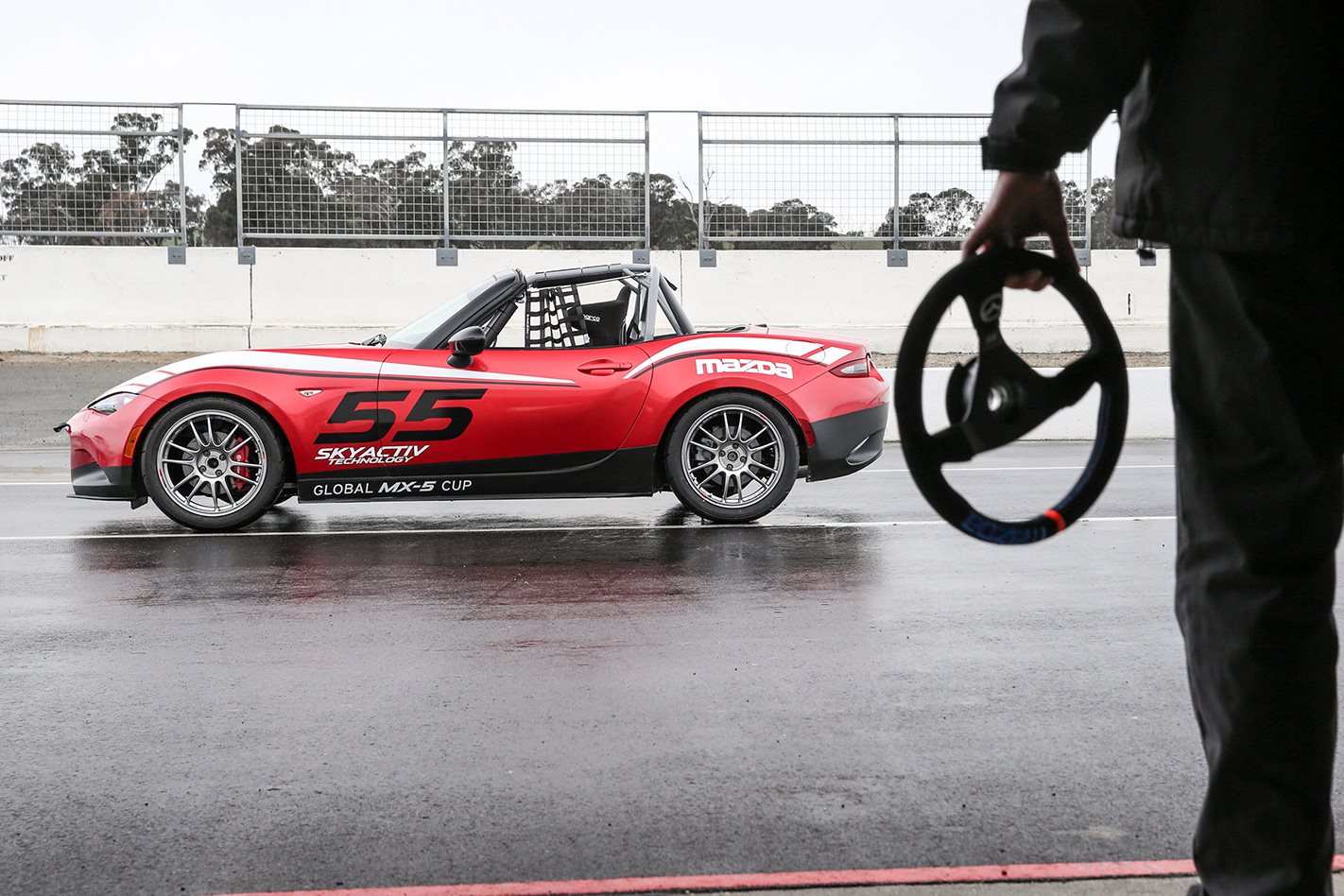 Outside, a black-clad Mazda engineer stands in pitlane, his face turned to the spitting sky. Even from this distance I can see the shiny gobs of rain on his forehead, but that doesn’t stop him waving me onto the track, the edges of his mouth curling into a tight, cruel smile. With a deep breath I snap my visor shut, flick the ignition switches and disappear into the haze. Three laps later, my shiny MX-5 Cup racing car – one of only two in the entire country – will become a muddy mess of rotating metal. Damn rain.

At this point a sane person might ask: Why? Why, when the sky is black and hawking forth sheets of water that make the track shinier than a shaving mirror, would you venture out at all? Especially on slicks. Well, as is often the case when there’s a racing car involved and a lap time to be achieved, sanity didn’t really enter into the equation. Cars just like this one have been dicing in tightly fought one-make championships around the globe all year, and Mazda has flown this example out to see if it’d make a viable grassroots championship here. But testing this box-fresh, racing version of our 2016 COTY is only part of the reason Wheels has come to Winton. Our real mission is to compare the MX-5 Cup with its standard road-going equivalent, the 2.0 GT Roadster, to discover how great a change fitting racing-spec suspension and rubber has made to the MX-5’s sweetly honed chassis. 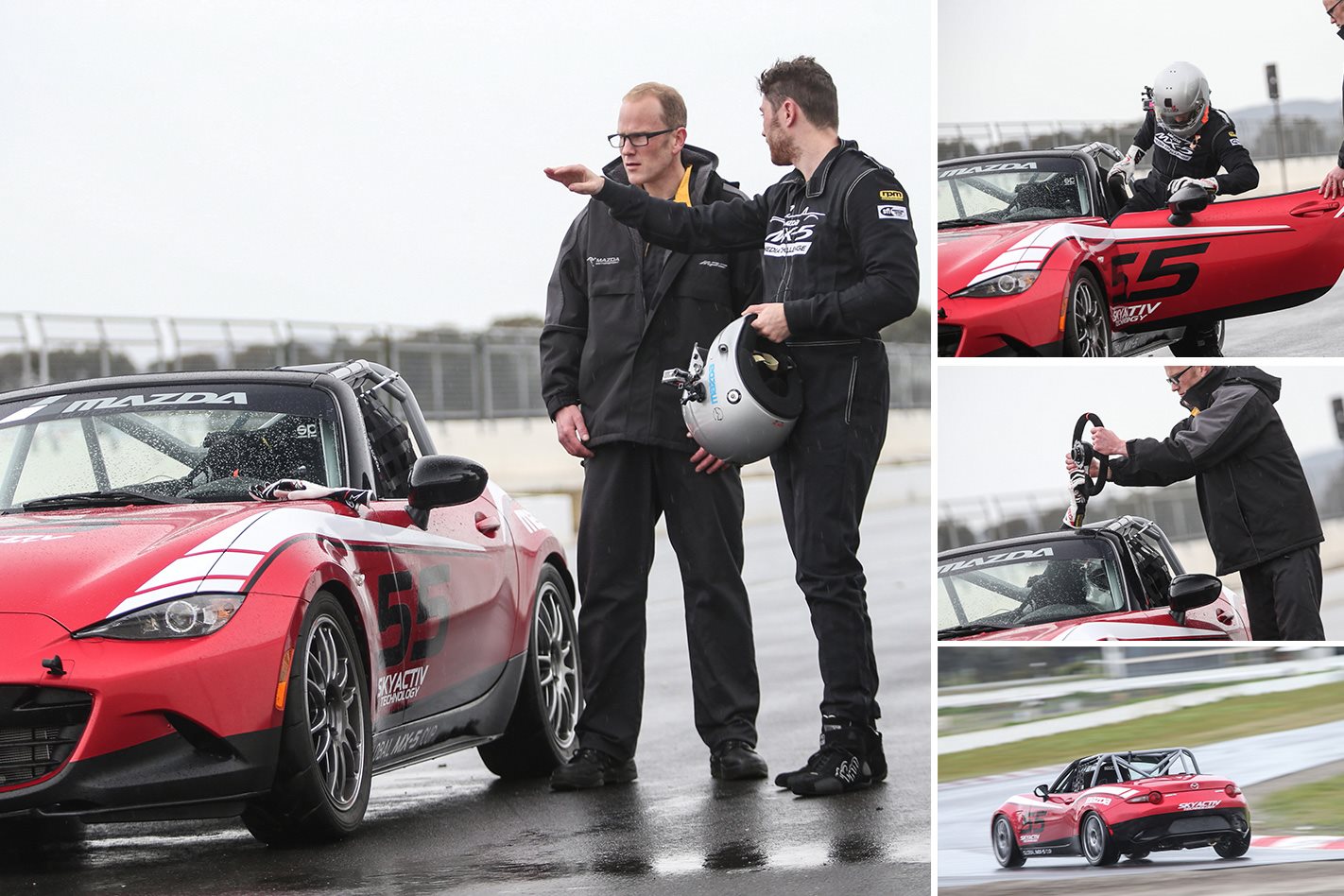 I also want to know just how much quicker the racing car is at full noise. Lap times, then, are crucial, but so far things haven’t been going to plan.
We’d arrived at Winton in the early morning light to find an even more depressing scene: the circuit shrouded in thick, oppressive cloud, its dark, reflective surface even slipperier. Constant rain meant slicks were out of the question, so with a set of R-Spec Yokohamas bolted on, I’d ventured out in the Cup car for five wobbly and excessively tentative laps that produced a best time of 2:04.08 – a benchmark quickly smashed by the road car.

Conventional Bridgestone Potenza road tyres that clear water more efficiently and a more familiar dynamic package meant I was more confident in the road-going MX-5; which quickly provided a vivid reminder of what makes the ND MX-5 so special. The steering is light and reactive, the larger 118kW/200Nm 2.0 litre engine is torquier than the base car’s 1.5 and has just enough grunt to overcome the rear rubber. And the softly sprung double A-arm front, multi-link rear suspension delivers an almost comical level of roll that’s key to the MX-5’s dainty charm. The short-throw gear-change is sweet too, and the pedals perfectly positioned for heel-and-toe downchanges.

It’s fun and predictable – the only real complaint goes to the flat seats that lack lateral support – and by lunch time the road-going MX-5 had set a 1:58.60; almost six seconds quicker than the Cup car. Not exactly the result we were expecting. 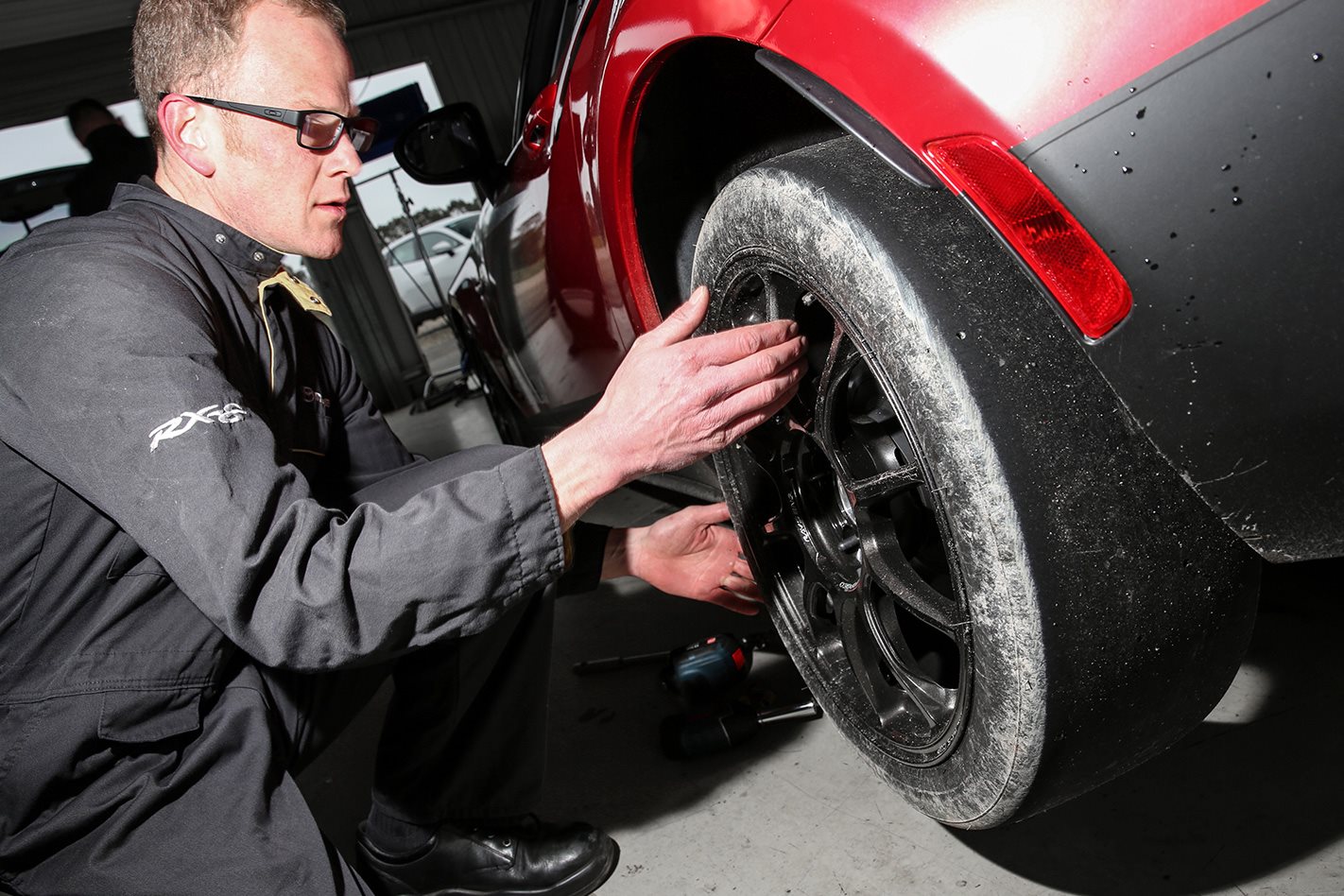 So, with a sliver of pale blue sky just visible through the low-slung cloud and the semblance of a dry line forming, the decision was made to bolt on the Cup car’s slicks and go for it.

In many ways, the MX-5 Cup should be one of the best cars Wheels drives this year. It promises to take one of the most charismatic and enjoyable sportscars on sale, and dial everything up to 11. Sounds like a slam-dunk. But as I thread myself into the stripped-out cabin – which instantly feels more V8 Supercar than affordable two-seat roadster thanks to its exposed FIA-approved rollcage, window netting, enormous wing-backed Recaro racing seat and AiM Tech digital dash complete with shift lights – a nasty voice in my head whispers: “What if they’ve dialled out the fun? What if the screwed-down suspension and track focus has stolen some of the MX-5’s magic?” 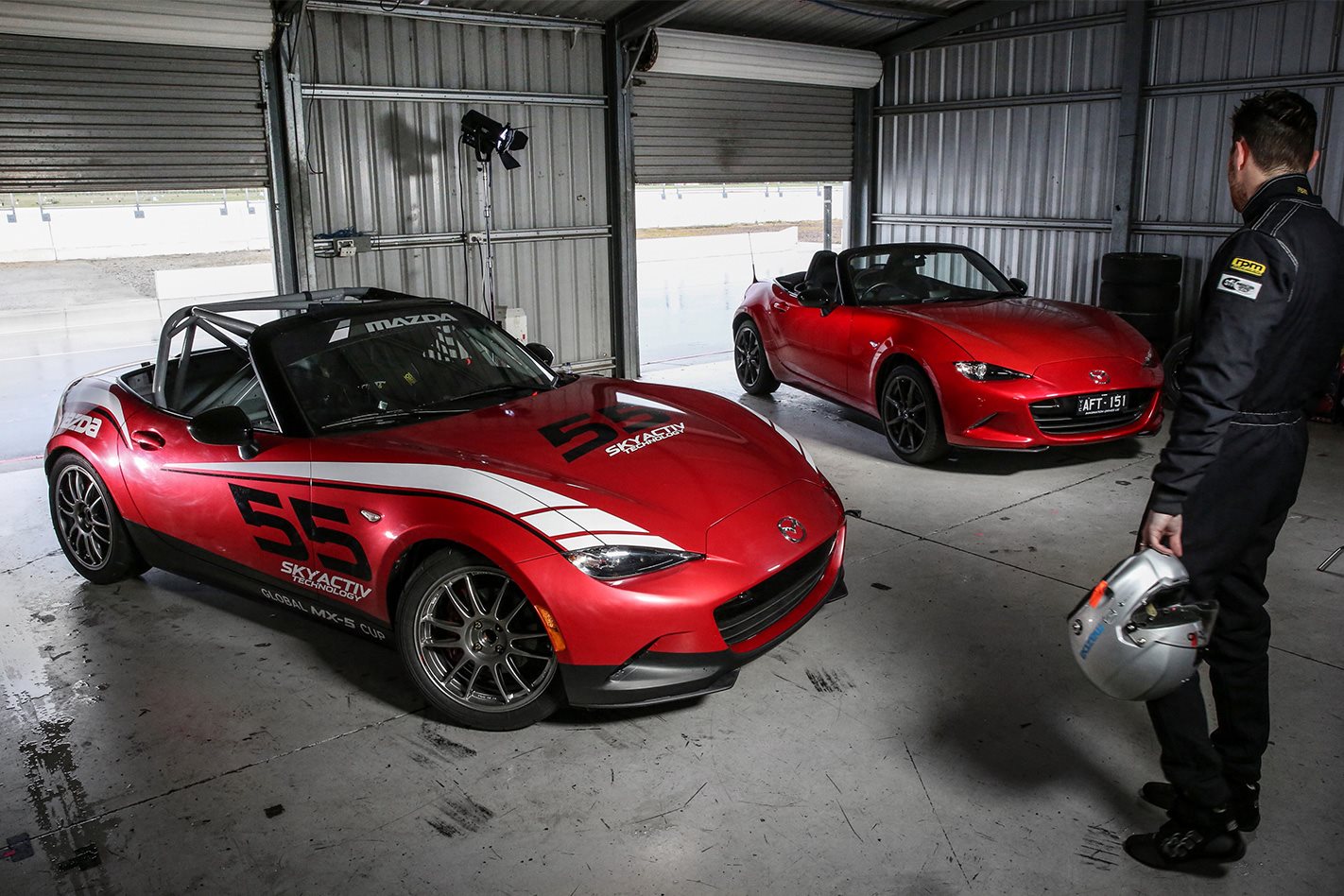 It’s enough to make me pause as I prod the starter button. Then the engine catches with a bark that’s poles apart from the road car’s sanitised purr, and my world fills with an angry, raspy thrum.

You can buy an MX-5 Cup in America, where they’re built (hence the left-hand-drive layout), for US$53,000, which translates to roughly A$70K. That’s at the affordable end for a turn-key racer, but is still almost double the 2.0 Roadster’s $39,550, so you’re probably expecting a big jump in power.

Wrong. The Cup car’s 2.0-litre atmo four is the same unit wedged into the regular MX-5, only fitted with a sealed racing ECU and a less restrictive stainless steel race exhaust. Mazda says outputs have barely changed from the road car’s 118kW/200Nm. 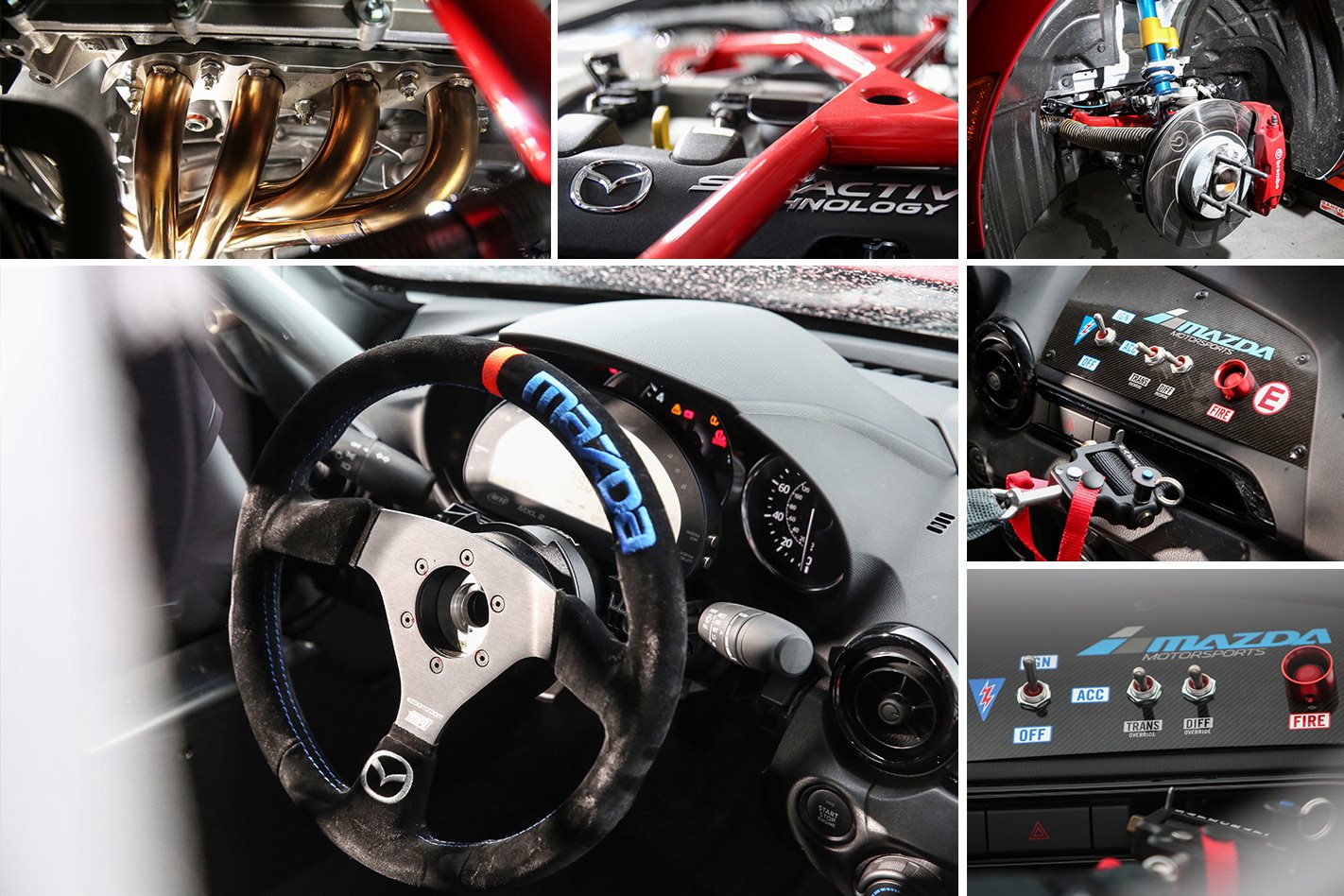 It’s not much lighter, either. While the carpets, sound deadening and passenger seat have all been turfed, and a lithium-ion battery fitted, any advantage is offset by that heavy monkey-cage. An upgraded cooling system, stronger Brembo brakes from the US-spec Club Edition MX-5 and other racing necessities like an extinguisher system and ballast box also pile the kilos back on. All up, the Cup car is just 25kg lighter, meaning it hits the scales just shy of a tonne, sans driver.

The biggest dynamic change is delivered by the heavily revised suspension. Where the road car rolls from turn to turn, the Cup car uses Multimatic DSSV coil-overs with 11-stage adjustable bump and rebound settings to turn and grip much more aggressively. And even on a slick track, the change in character is immediately obvious; the road car’s delicate playfulness replaced with a hard-edged steeliness that feels far more serious, and noticeably faster. 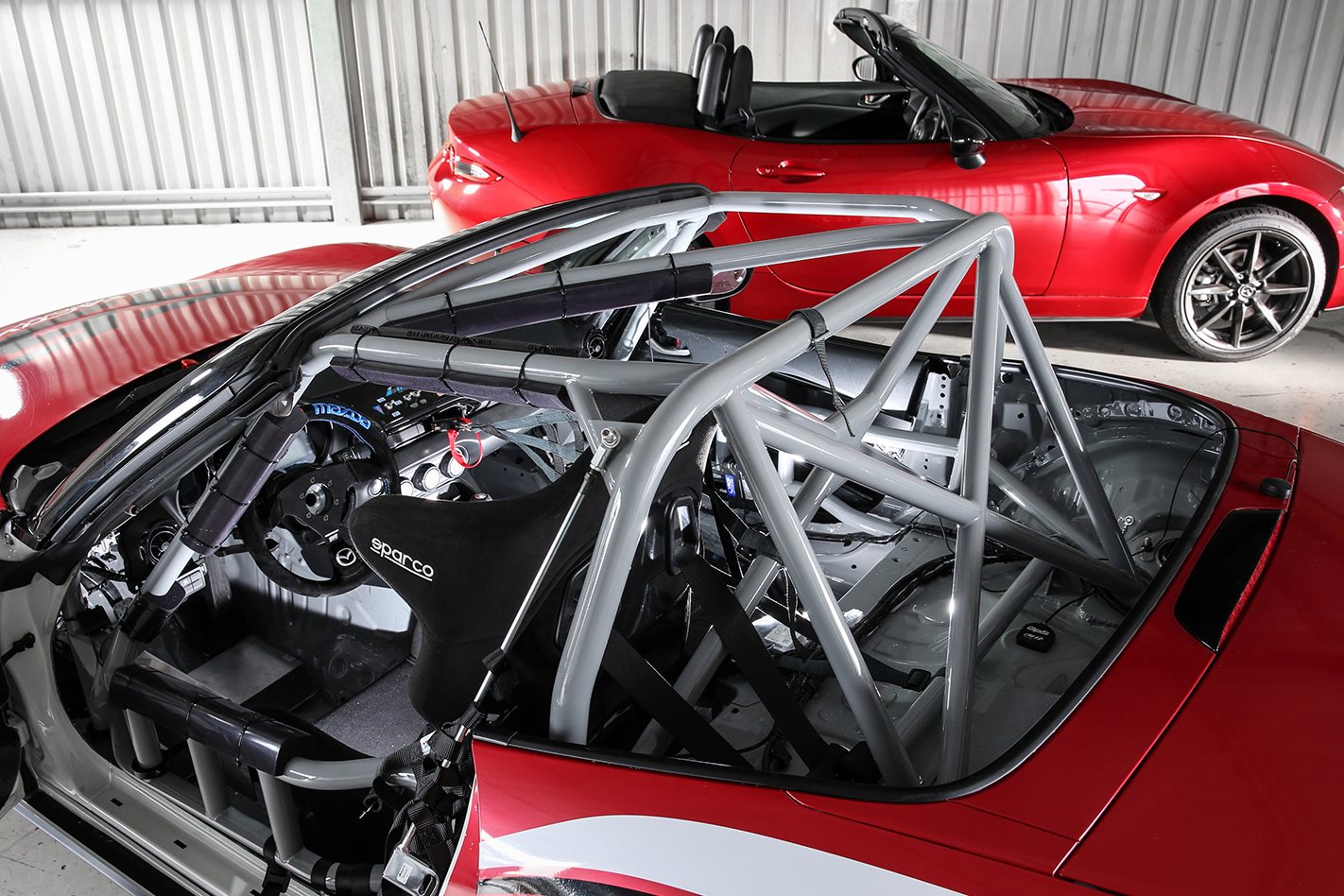 Until I spin, that is.

With my confidence building and the lap timer ticking, I fail to heed the warning of water hitting my visor as a passing shower grows steadily heavier. Suddenly the Cup car’s extra confidence and lateral purchase evaporate, every corner bringing an unknown level of grip. Combined with a short wheelbase and no traction or stability control aids, it soon has me spinning like a top towards the muddy outfield. 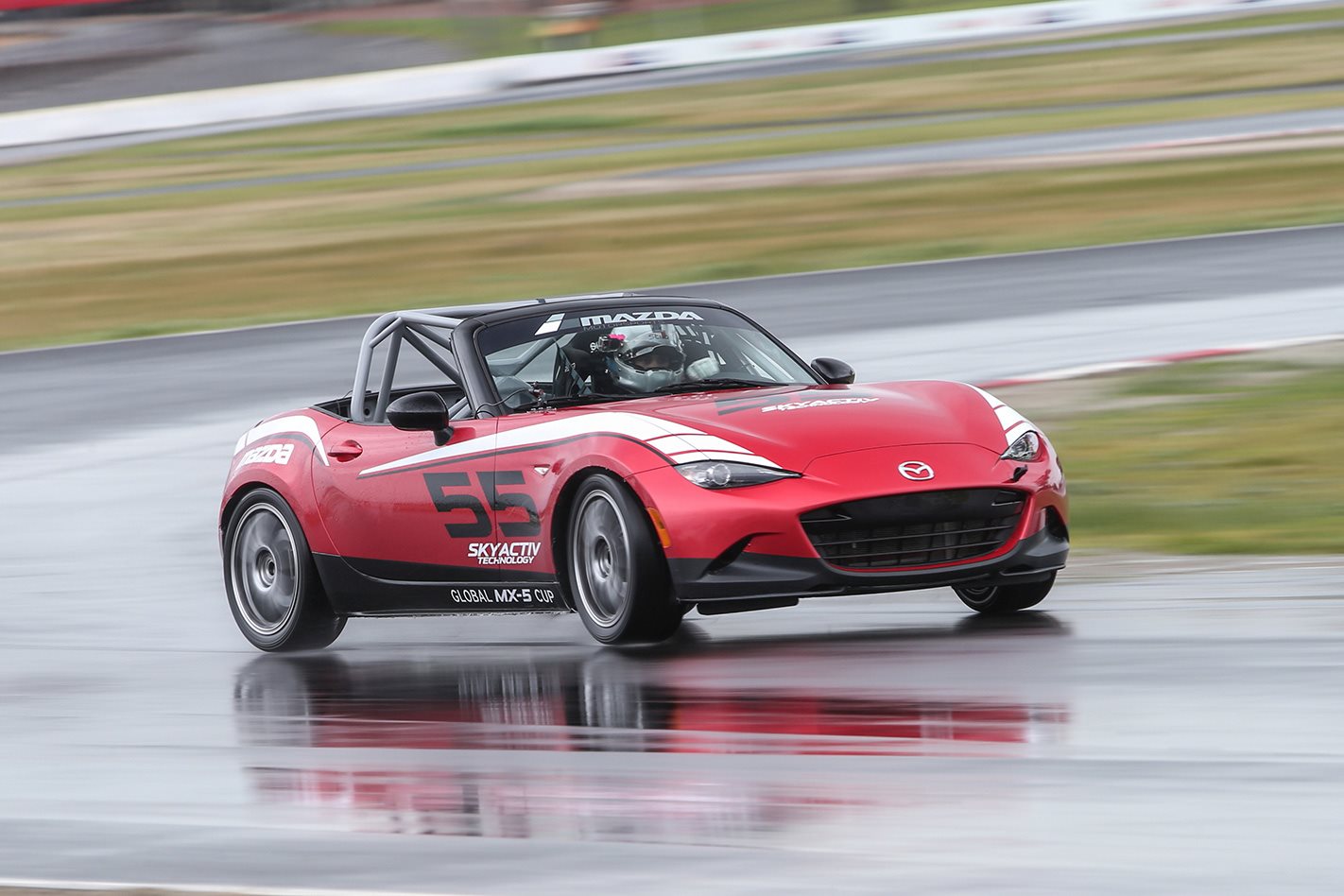 It’s a tame, if embarrassing, spin, but at least bobbling back to the pits gives me time to reflect on my first proper taste of the Cup car’s potential. Beyond the suspension changes, the thing that dominates the experience is the noise. The rorty soundtrack imparts a sense of menace and purpose absent in the road car, and above 4000rpm the freer-flowing exhaust delivers a step change that homes in on the 6300rpm limiter with greater ferocity. The driving position is improved too, thanks to the lower racing bucket, and there’s also less assistance to the steering, so the detachable tiller feels meatier and even more responsive.

Mercifully, by late afternoon the sun has appeared and the track is dry, so I’m let loose for five timed laps in each car. And it’s here that the Cup car comes into its own. With the slicks finally able to bite, I begin to lean hard on the chassis and what I discover is a very friendly little racing car. The lasting impression isn’t one of ferocious speed – the lack of engine tweaks means both MX-5s have similar trap speeds of around 160km/h at the end of Winton’s main straight – but rather of tenacious lateral grip. The race car encourages you to turn in harder, to brake later and to carry far greater mid-corner speed, especially through Winton’s long left-hand sweeper. Data logging shows the Cup car is tipping into the sweeper at 140km/h, some 18km/h faster than the road car. It’s an advantage the Cup carries through the entire turn. 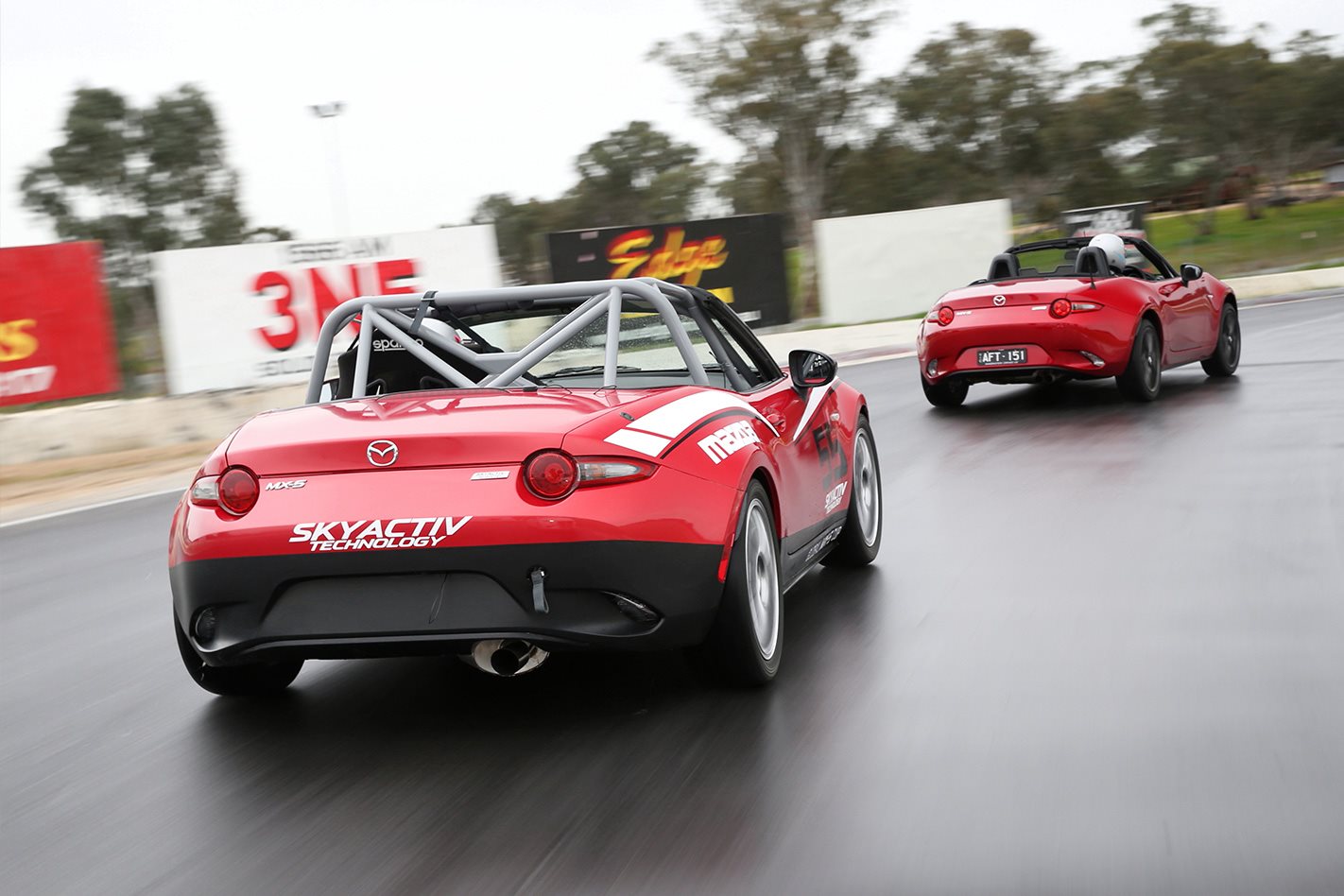 Better news is the realisation that while the Cup is noticeably more focused and locked down, the chassis still has the inherent balance and a hint of bodyroll to retain the playfulness we love so much in the regular MX-5. The magic remains.

But is it fast enough? That’s debatable. There’s no doubt more grunt would dial up the excitement, but the Cup is still capable of delivering a dopamine hit chiefly because you always feel like you’re in charge. You emerge not stinking of sweat and relieved to be alive, but gurning like an idiot, knowing you’ve wrung every last drop out of the car, and yourself. 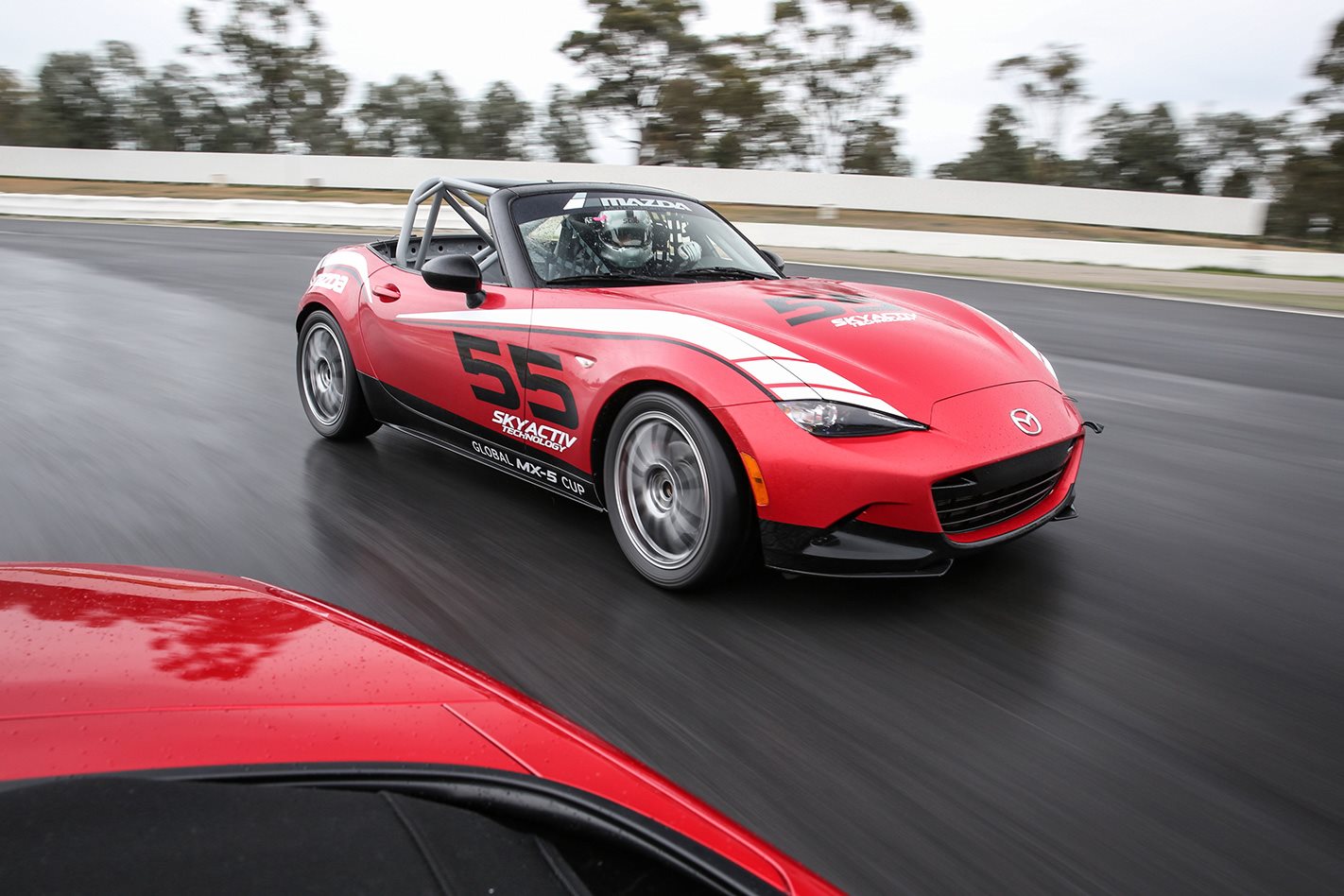 Checking the stopwatch shows the Cup car manages a best lap of 1:39.72. For context that puts it comfortably inside the top 10 of Australia’s other one-make championship, the Toyota 86 Racing Series, which uses cars with significantly more grunt and hungry professional drivers at the pointy end. The best the road going MX-5 can manage is 1:46.32, some 6.6sec adrift.

All this means that as the Cup car is loaded onto the truck to be shipped back to Mazda HQ, I’m itching to know what it’d be like to race one wheel-to-wheel in a field of 40-plus cars. The chances of that happening, though, at least in Australia, are pretty slim. While Mazda insists it’s evaluating the category, the fact Toyota already fills the demand for a low-cost one-make category, and the significant financial investment required to get a rival series up and running, means Mazda is unlikely to take the plunge.

It’s a shame because despite my fears to the contrary, the Cup car still feels like an MX-5. Only sharper. And faster. Praise doesn’t come much higher than that. 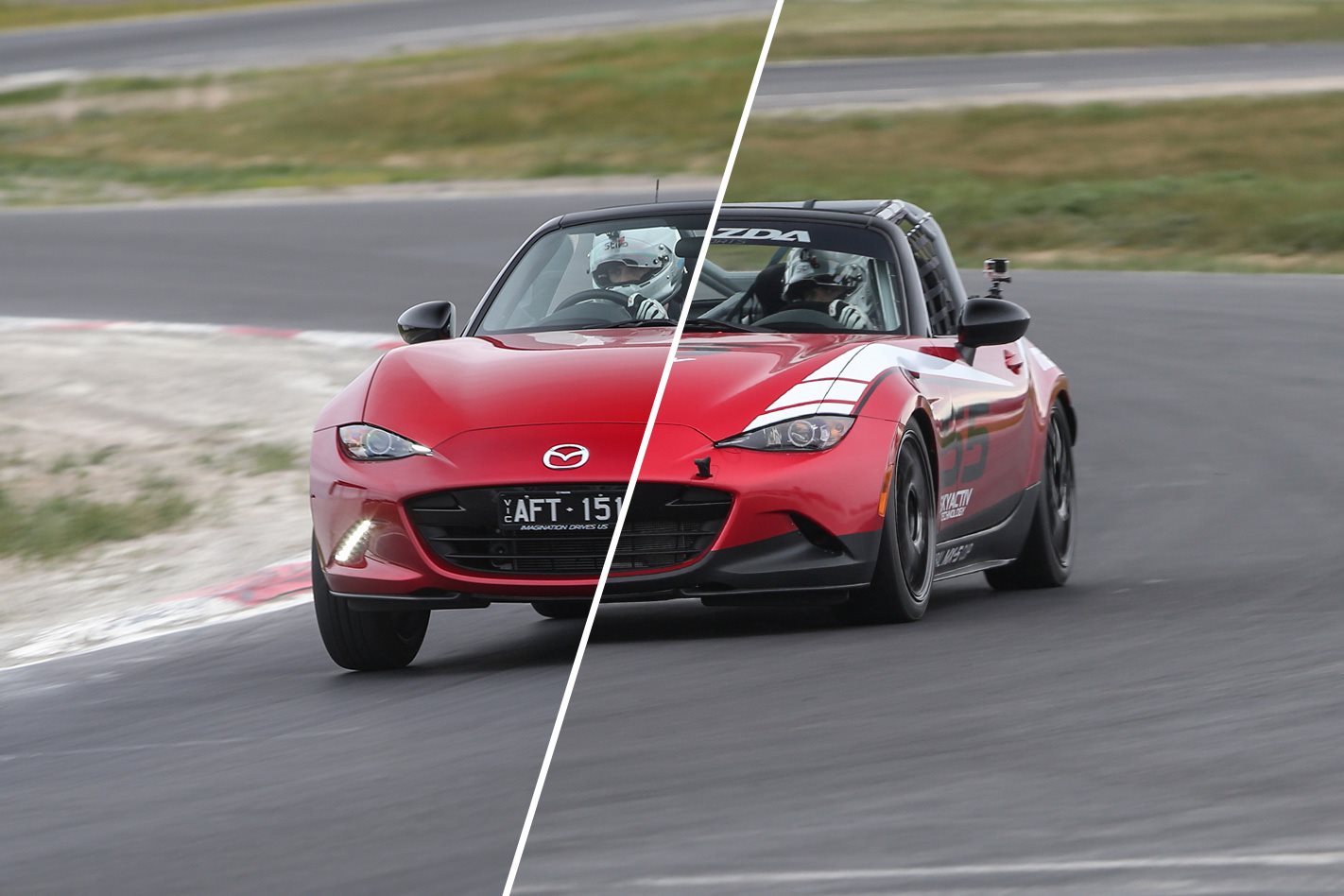