Why your car isn’t as safe as you think

Old ANCAP safety ratings could be misleading consumers as to which cars are safest, due to changes in the independent crash test authority’s testing protocols and an increased focus on crash avoidance technologies.

Five-star ratings earned up to a decade or more ago are in many cases outdated because they were awarded before the advent of crash avoidance systems that have since become commonplace in the new-car market.

It’s not helped by ANCAP claims such as “the more stars, the better the vehicle performed across ANCAP tests”, even when qualified with a statement suggesting newer cars are tested to more stringent criteria. 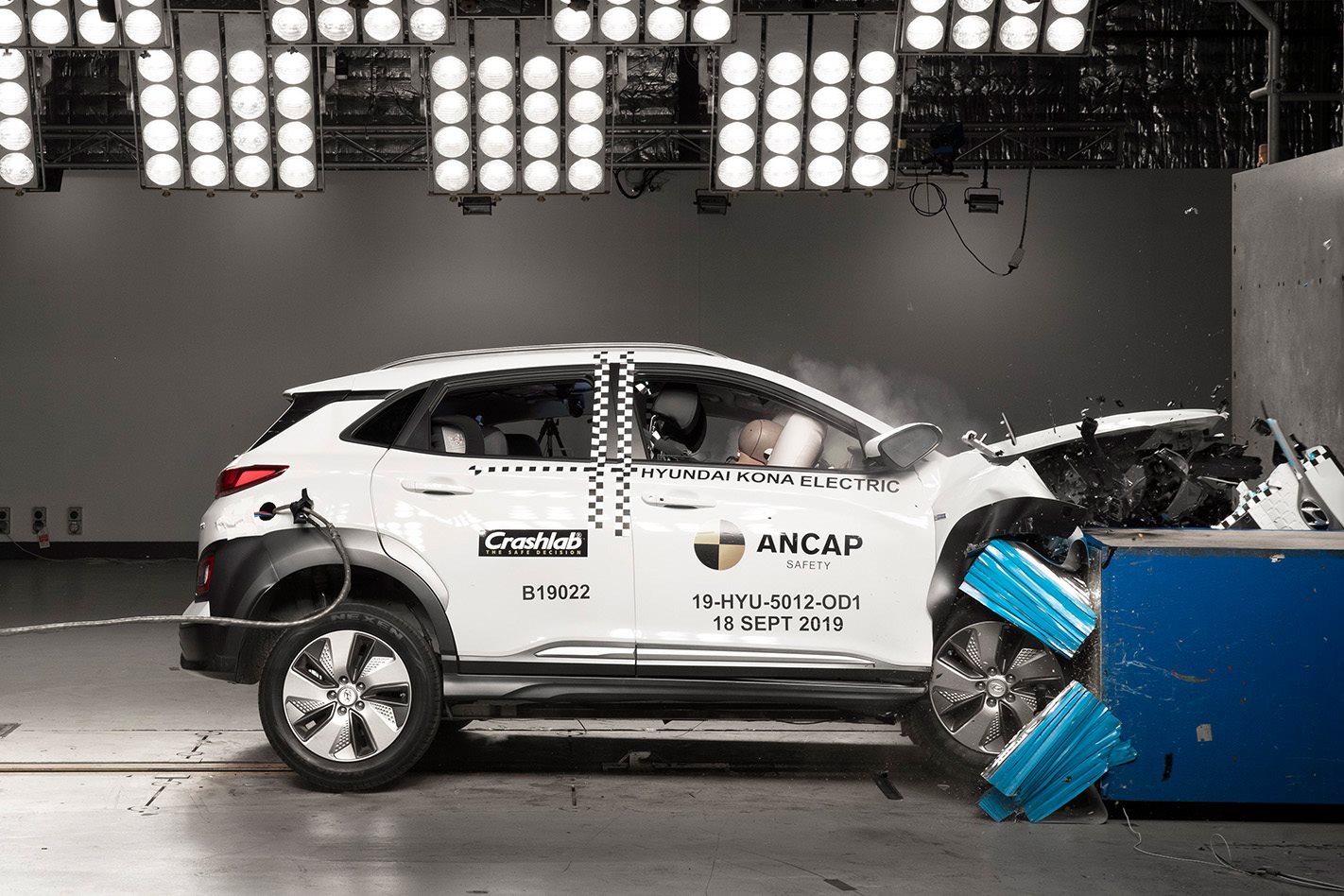 Even the NSW government’s Centre for Road Safety appears confused by the ANCAP requirements, incorrectly stating on its website that all vehicles receiving a five-star ANCAP rating “achieve the highest standards in all tests and feature advanced safety assist technologies”.

In a statement to Wheels, the executive director of the Centre for Road Safety, Bernard Carlon, did not address the issue of safety assist technologies, instead reiterating that “ANCAP ratings should be used for purchasing new vehicle models”.

It’s easy to understand the source of confusion. ANCAP’s current protocols span 21 documents and 604 pages, a tome unlikely to be digested by any prospective car buyer.

Read next: Why SUVs could get hammered on the new NCAP safety tests

Some of the most popular cars on the road – including the Toyota LandCruiser 70-Series ute, Mitsubishi Pajero, Volkswagen Amarok, Toyota Prado and some versions of the Hyundai i30 and Honda Civic – get the maximum safety score but don’t get the latest active safety technology. They were tested between 2011 and 2017.

Some of those features are required for a modern five-star ANCAP rating; ANCAP standards have increased annually since 2011.

In the case of the Amarok ute, which received its ANCAP rating in 2011, it also doesn’t get airbag protection for rear occupants, something that would rule it out of receiving a five-star ANCAP rating if tested today.

One of the key technologies missing on various older cars is autonomous emergency braking (AEB), something commonplace on even mainstream new models but rare just a few years ago.

Manufacturers often appear unwilling to invest in engineering new safety aids into vehicles approaching the end of their lives, instead preferring to await the rollout of all-new models. And there is little incentive to invest in such tech if the existing five-star ANCAP rating can still be used.

While ANCAP now has policies in place to reassess cars that don’t meet modern five-star requirements – potentially downgrading their rating – they were only introduced in 2017. Cars tested before that can maintain their five-star ratings beyond the new six-year limit.

Read next: Speed limiters are coming to Australia

“With the goalposts moving all the time, it’s confusing,” Meredith says. “The reality is that there are some four-star cars in 2020 that have more safety than a five-star car from a couple of years ago.”

Meredith is in part defending the four-star rating awarded to some variants of the Kia Cerato. While all models come with AEB, the S and Sport variants lack pedestrian and cyclist detection systems, marking them down in the ANCAP safety assist criteria. 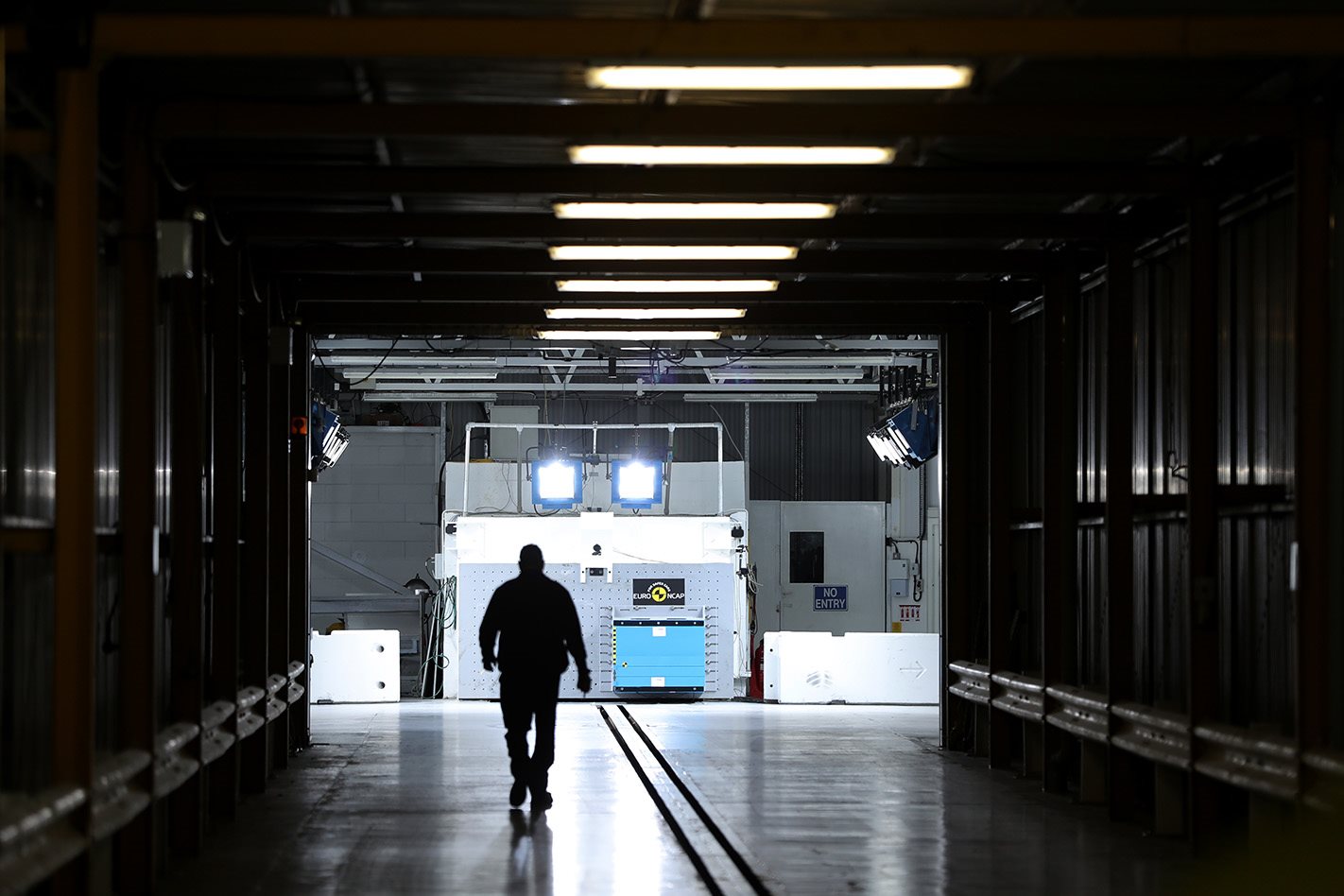 It means the two most affordable versions of the Cerato are left off the shopping list of many buyers because of their four-star ANCAP rating. Had Kia released the car the year before, it would have scored five stars.

Meredith is critical of the ANCAP influence with fleet and government departments, many of which now stipulate a five-star policy for new-vehicle purchases.

“The issue from our point of view … is that government departments, big fleets won’t buy a car unless it’s five-star [ANCAP],” he said. “It’s very, very difficult to explain to them that, for example, a Cerato might be four-star but it’s safer than a five-star car from 12 or 24 months ago.”

Read next: These are the safest cars to have a crash in

The issue is compounded for ride-share giant Uber, which provides many rides in older cars.

In the case of the Kia Cerato, it means versions of the current model are not eligible for Uber duties, yet the older model with fewer safety features and inferior occupant protection would be eligible because it has a five-star rating.

Uber drivers are free to select 2010-2015 models of the Toyota Corolla, Mazda 3, Mitsubishi Lancer, Honda Civic and more – none of which have those active safety assist systems.

The now departed ANCAP chief executive James Goodwin admits there are some new-car “outliers” and that “a handful of examples … are just starting to reach the point where they’re not quite up to the current expectations”. But he says they are rare. “Ninety-one percent of all new cars on sale have a five-star rating, so we’re dealing with a very small issue.”

Yet that small issue deals with some big sellers.

The Mitsubishi Pajero misses out on those advanced safety assist technologies – such as AEB, something that is now required in order for a vehicle to achieve the maximum ANCAP score.

The Toyota Prado, one of Australia’s most popular family SUVs and much loved for country touring, achieved its five-star rating in 2011. But it was rated as ‘marginal’ for pedestrian protection, something that would see its score dropped to four stars or lower by today’s ANCAP standards. The Prado also misses out on seatbelt reminders for all seats, which also is required for a modern five-star ANCAP rating. 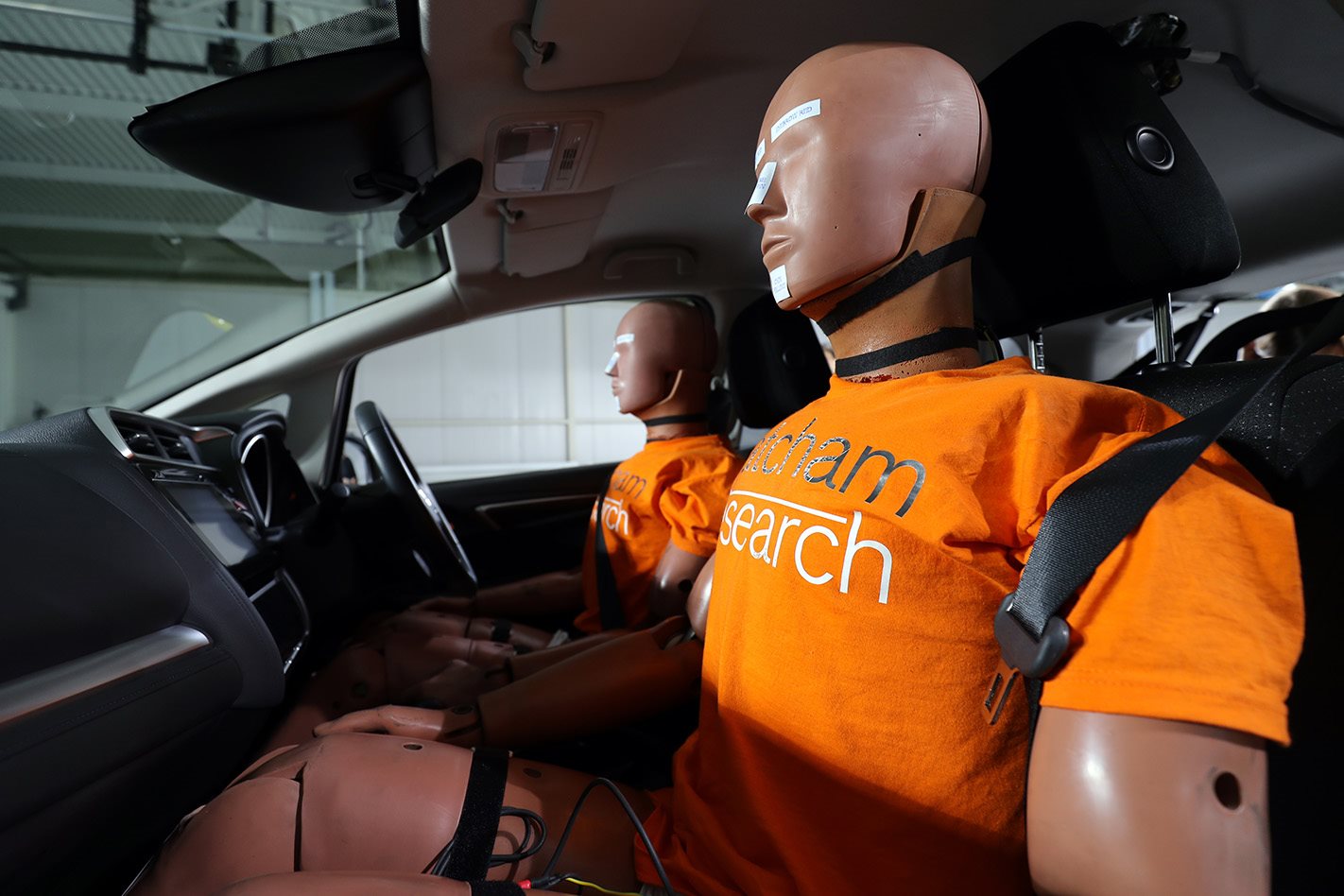 Goodwin – who has now left ANCAP for his new role as CEO of the Australian Airports Association – is threatening to tackle the issue of those older cars still on sale with five-star ratings by retesting them. “I would put the vehicle brands on notice and say, ‘You should start looking at some of those older designs you’ve got that you’re still selling new. You should be doing some of those in-house assessments to see (if) they stack up to the 2020 protocols’”.

That said, there’s unlikely to be blood drawn, with Goodwin saying he would rather collaborate with manufacturers – which now contribute more to ANCAP’s funding than the 23 subscription members – than create a “gotcha situation” with a surprise retest.

Goodwin points to the date stamps that have since been applied to older ANCAP ratings, theoretically giving buyers who delve deeper than the star rating a better idea of how the car avoids a crash and protects its occupants. The longer ago it was tested, the less rigorous the protocols it was tested to.

Read next: ANCAP might be flawed, but it’s also vital

ANCAP’s advertising requirements now insist car makers include the date stamp on any advertising material and brochures, although not all comply. The Pajero, for example, is simply listed as being ANCAP tested with a ‘maximum’ rating. “What we have had to do from time to time is inform a manufacturer they are not being compliant with those brand guidelines,” Goodwin says, suggesting Mitsubishi may receive a phone call.

He also pushes the onus onto car dealers to effectively dob in their rivals.

“I need help from people on the ground in dealerships. Don’t just learn about what you’re selling – what about the competitors? Bring the date stamp discussion into the sales pitch.”

Read next: The catharsis of conversing with cars

His advice to buyers is to seek the most stars in a car tested within the past three years. “Go for the safest car that you can afford with the newest date stamp,” he says. “The easiest way is for people to be asking for a modern five-star vehicle.”

While Goodwin insists shoppers are increasingly aware of ANCAP date stamps, some fleet buyers appear unfazed. Mining companies such as BHP and Rio Tinto still buy Toyota 70-Series LandCruisers in big numbers, relying on an ANCAP five-star rating awarded in 2016. The rating only applies to the single-cab ute – not four-door models able to carry more people – and doesn’t account for the lack of key safety assist technology such as AEB. 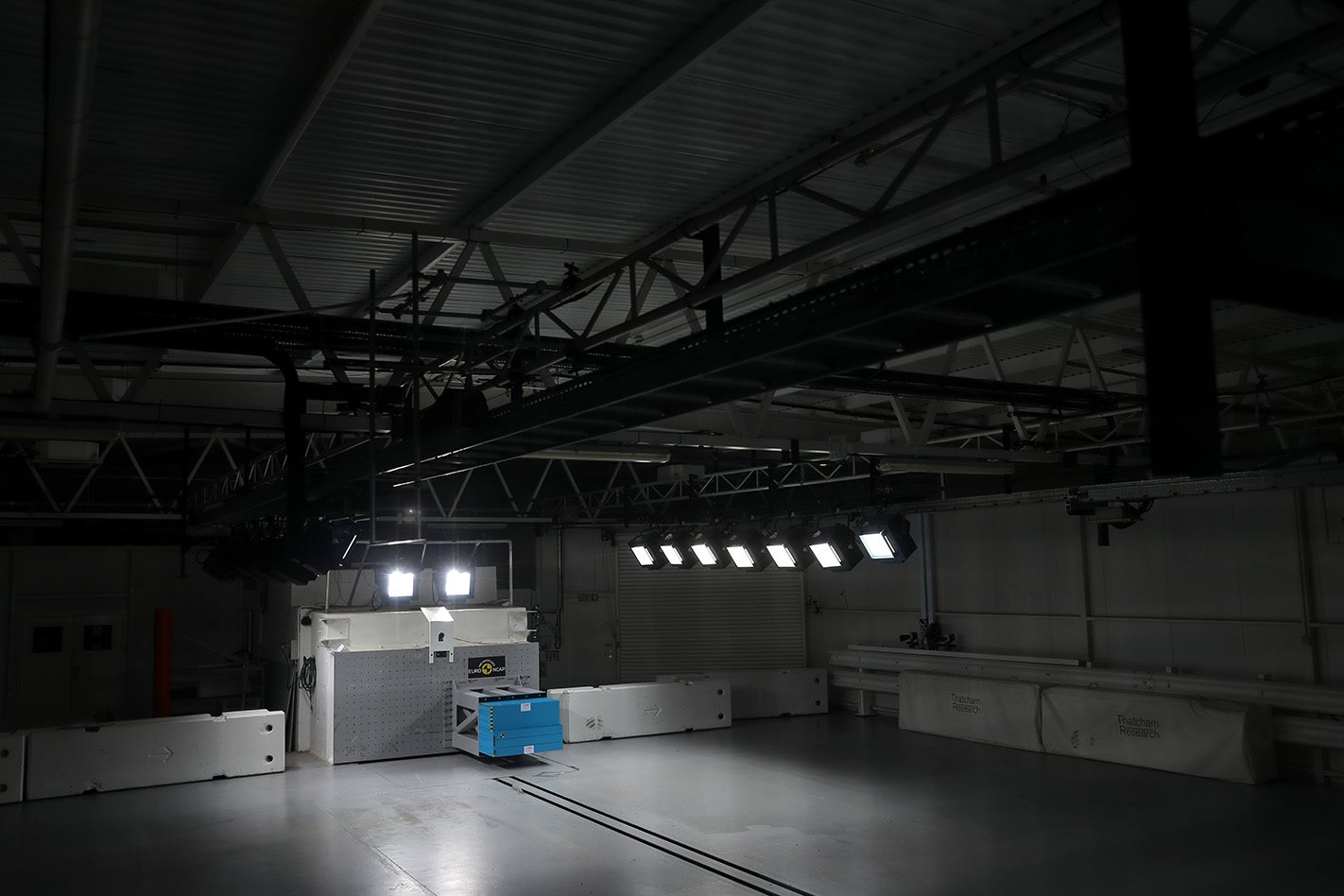 State and federal governments – all of which pay annual subscriptions to help fund ANCAP – have policies stipulating that vehicles used for company business must have five-star safety ratings.

Goodwin says that 52 percent of new-vehicle purchases are by corporate and fleet buyers, who are “very, very well informed”.

“They are the ones who have the big influence on cars entering the marketplace,” he says.

Read next: Our obsession with dual-cabs is a problem

Small businesses are less likely to be as well versed in the nuances of ANCAP ratings, although fleet companies such as LeasePlan – which manages almost 100,000 cars – ensure their customers are aware of new technologies and their impact. “We recommend an annual review of company vehicle policies, with safety as a top priority,” says Paul Scully, LeasePlan’s national marketing communications manager. “We do try to educate our customers on what the latest safety features do and what their benefits are.”

The confusion around current ANCAP ratings is compounded by regular changes to testing protocols – something likely to accelerate in coming years.

In aligning testing in 2018 to its European partner, Euro NCAP, the Australasian New Car Assessment Program has markedly changed its ratings, making for apples-versus-oranges comparisons between old and new tests.

In 2020 the physical crash barrier tests, which hadn’t changed for decades, were modified to better reflect common crashes and look to address a common complaint of ANCAP ratings: that the individual tests do not account for compatibility differences between cars. A 2.7-tonne Toyota LandCruiser, for example, will typically inflict much more damage on a city hatchback.

However, the confusion about the comparative safety merits of cars is set to remain as more new cars go through ANCAP in 2020 and beyond while older vehicles retain their outmoded safety ratings. 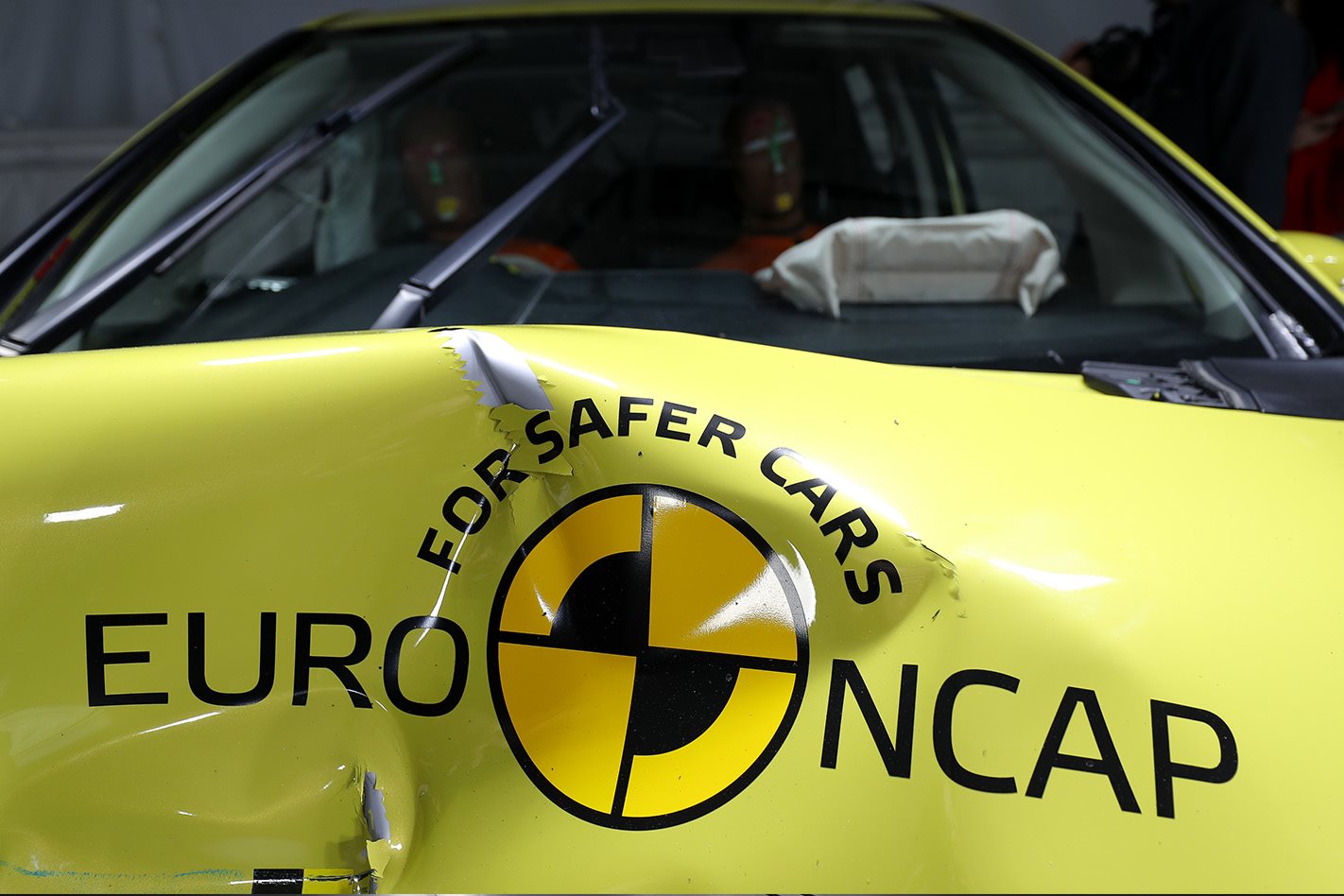 SIDE-IMPACT SAFETY’S IN THE BAG

Centre airbags to protect front-seat occupants from impacting each other will soon become more common. From this year, ANCAP is measuring the potential for injury between front-seat occupants in a side impact. It’s part of broad changes to the ANCAP testing criteria that also revises the barrier tests that have been in place for decades. A new side-impact test increases the weight of the sled (simulating an approaching car) from 1300kg to 1400kg. And the frontal offset test now includes a 1400kg trolley impacting the test vehicle head-on with a 50 percent overlap.

STAR BREAKDOWN: TOP-RANKED FOR SAFETY, BUT WHERE’S THE KIT?

This selection of six popular vehicles – as much as nine years old yet still available as new models in Australian showrooms – are being sold here as five-star vehicles for safety, despite lacking vital technology (as common as rear airbags and autonomous emergency braking) essential to scoring the top rating under current ANCAP testing criteria.