I’ve got the latest piece of survival gear. It sits under the back seat of the Patrol, ready for use if and when I need it and it could save my life.

This article was originally published in the April 2014 issue of 4x4 Australia.

What is it? It’s a HydroPack — a revolutionary ‘forward osmosis’ desalinator and purifier that not only removes viruses, bacteria, heavy metals and cysts, but also salts in water that contains up to 2000 to 3000 parts per million (ppm). There’s also a kit that will do saltwater.
These single-use pouches never block up, require no maintenance and do not require pumping or any labour.

Devised and developed in the USA by Hydration Technology Innovations (HTI), these units are now available in Australia through HTI Australasia.

In addition to the HydroPack, there are a number of other emergency hydrating pouches and seawater desalinators, along with bigger units such as the Expedition (a back pack type unit) and the HydroWell (a jerry can unit) that can be used to produce up to 2700 litres of drinking water. Each HydroPack comes with six pouches, which are pre-filled with a flavoured osmotic agent.

When it’s fully hydrated from any water source, it becomes a highly safe and pure electrolyte enriched drink. The pouch itself is the forward osmosis membrane that allows it to draw in water and reject even the harshest contaminants.

Each pouch supplies 355ml of drinkable fluid after 10 hours of immersion in any water supply.

We thought we’d give the HydroPack a test with some muddy and animal polluted water from a stagnant overflow on a farmer’s dam.

The water smelt terrible and didn’t look too appealing but we grabbed a bucket full and dropped in the pouch. Hours later we pulled the fully hydrated pouch out, wiped it down and took a sip. It looked and tasted just like a sports drink and after another 10 hours I was still standing with no effects from drinking what was originally polluted water.

We also tried the SeaPack pouch designed to filter seawater and produce 500ml of drinkable fluid.

We took our sample of seawater from the shallow saline waters of the upper reaches of Westernport Bay in Victoria, which I’m guessing has salt levels in the upper band for seawater, so it was an ideal area to test the packs. After two simple steps to set up the pouch, we simply dropped the pack into the water. 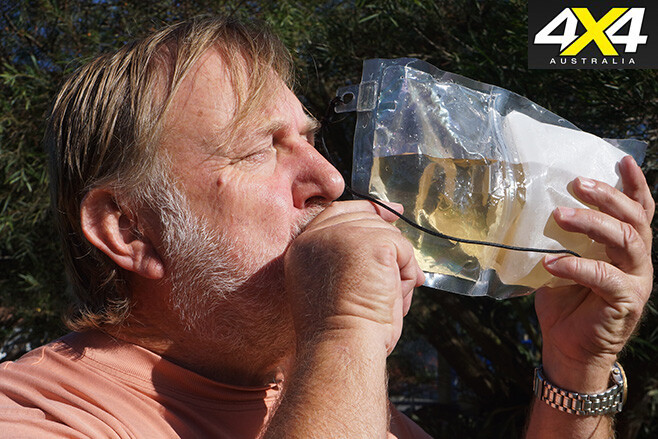 After 10 hours we had a flavoured drink to enjoy, which tasted better than the fluid from the HydroPouch — that was more to do with the flavouring than anything else.

I would have preferred plain water (for a cup of tea?), but in a survival situation, a sports drink that replenishes body salts probably makes more sense.

We say: Long shelf life; safe and easy to use when you need it. Could save your life!
Contact: www.htiwater.com.au